Is that a Stout rear bumper? Would you mind putting up a couple of photos if it? I plan to make a similar bumper for my 4Runner.

It is a Stout. I'll take some pics after the sun comes up tomorrow. While I really like the bumper the only change I would do is the pivot for the rack. I think the "trailer" spindles are a cleaner design. If Grant's welds ever break I'll modify the rack this way. Problem is, Grant's welds don't break. I'll explain tomorrow with the pics, but I recently modified the rack.
Last edited: Nov 5, 2008

Very nice 85 man. Love what you have done with it. Its really cool that you have owned it most of its life, I wish I could say the same for my 85, but hey, I was still swimming around in my dad's junk in 1985....

I also have the Stout rear bumper, but my swing out is different. Instead of seperate hoops for spare tire and gas can, my swing out just has a third bar going all the way across. I am recycling my 85 and hope the bumper and brackets fit on my 95.

HJ-45CrewCab said:
I also have the Stout rear bumper, but my swing out is different. Instead of seperate hoops for spare tire and gas can, my swing out just has a third bar going all the way across. I am recycling my 85 and hope the bumper and brackets fit on my 95.
Click to expand...

Like this? I owned this truck for a few years and this is the bumper I had on it. 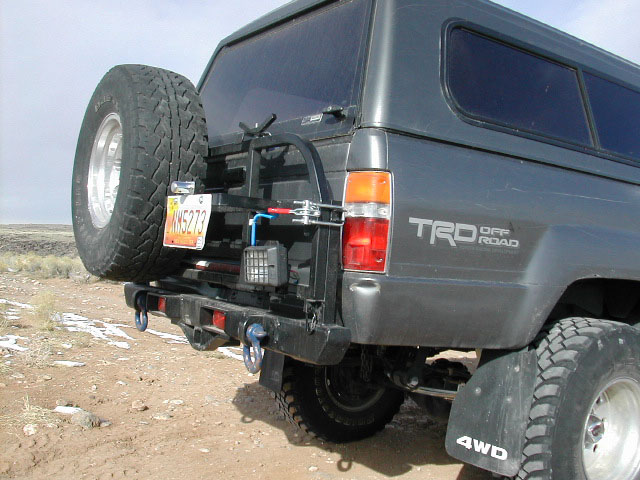 Exactly. I am suddenly inspired to rip the OEM stuff off my 95 and get this installed. Bumper is off my 85, but brackets are still on the frame. This bumper was one of the best things I ever purchased for a truck.
Last edited: Aug 6, 2008

Very nice 4Runner Pappy. Reminds me a bit of my own.

I'm in the middle of installing TRD elockers front and rear. Got them both in but the front was a biatch! I didn't have enough clearance for the OME U-bolt to go between the elocker and spring perch without shaving an 1/8" off the U-bolt. I just have to get them wired now. Write-up to follow as promised.
M

pappy said:
It's actually a series of lights that sweep left to right as the Ox Sensor sends the pulses. No numbers, it's all relative.
Click to expand...

WELL... I think that you need to come out to the dakota territory challenge so we can meet.. and I think you need to bring that dual transfer case system so I can buy it off ya... come on man you will never get it put in by then.....

missouriman said:
.. and I think you need to bring that dual transfer case system so I can buy it off ya... come on man you will never get it put in by then.....
Click to expand...

Ya know. I take enough poop from the guys in New Mexico. Get in line ...

yeah, get in line Mark, Moderators get to go to the head of the line anyway.....

It's been awhile since I posted this up, and believe it or not I'm still driving, and loving, this truck. Well, not loving it as much lately, but I'll fix that. As we all know, this sickness leads to change. Our trucks are never static, they are never "finished." So let us start by digging back into the archives and see what has changed, in red.

pappy said:
On to what's under the hood.

So, as you can see there have been minor changes. The W56 and 4:1 transfer case were finally replaced with the R151F and double 23 spline cases. There is no going backwards.

I also pulled out the dual battery system. The little gel failed and I decided to install the largest Sears Platinum I could fit. Not the giant offering, but the next size down. No issues so far.

I think the biggest change is the engine. Notable issues have been:

July 2012. I noticed the head gasket was leaking externally. The head was pulled and taken to a local machine shop to be reworked. The shop made several observations. First, the head had been milled .020" which is at max spec. The machine shop took off another .005" so I ended up using a FelPro Headsaver which was .020" thick. So I'm still under by .005". Not a big deal. Second, they had to replace all the valves because they had been ground down to a razors edge.

March 2013. On my way to Baja, 30 miles east of Flagstaff, the timing chain broke. Long story short, it bent the #4 intake valve. A Mud SOS was made and the truck was abandoned with Mogas , a capable Cruiserhead. I loaded up my junk into a buddy's FZJ80, and the adventure continued. The guides were in pieces. Lifespan of the chain and steel guides was 126,691 miles.

May 2013. Engine failed. Broke a piston ring on #3 driving back from Durango. Engine pulled and taken to a local machine shop. Shop tells me the cylinders are already .040" over and it can't be rebuilt. Block is trash. A block is harvested from the U-Pull and it turns out the engine has never been rebuilt. It's a virgin! At least in the future I will be able to rebuild this block. Miles on the engine? 130,442.

As I said months ago:


pappy said:
My recommendation would be to shop around locally. If you live in a town large enough you should have a few great shops that do performance rebuilding (we have at least 3). If I decide to pull my 22RE in the future it will be taken to a local shop. That way I won't be dealing with somebody many miles away if something goes wrong, and shipping will simply involve a buddy's pickup. They are more likely to make it right.
Click to expand...

So, where do I stand now? I'm waiting on the machine shop to finish rebuilding my 22RE. They are going to reuse the balanced crank and rods, balance the pistons, and install a new timing cover. Hopefully I will hear from them this next week. I have a four-day weekend coming up.

The probability of me owning this engine long enough to rebuild it is slim. Yes, I plan on keeping this truck. But there is a 3RZ in my future. It will happen. I just need to walk into the U-Pull and find one with my name on it.

Machine shop rebuilding my 22RE: Budlong Motorsports. They have been the unofficial machine shop for High Desert Cruisers.

Flagstaff Cruiserhead: Mogas here at Mud. Dave Anderson for real. I'm not the first Mud'r passing through Flagstaff he has helped.

The virgin block ready for delivery:

Thank you for the kind words, Jon.

Here is my shop info if anyone is interested:

For the record. Dave has dibs on the 22RE when I finally get around to the 3RZ. Right now, I'm back in love with my 4Runner, so it might be awhile. I'm certainly in no hurry now that my 22re is back where it should be. Only 3000 miles on the new engine, and I'm dying for a road trip to see how it does.
J

I'm busy shopping for another 22re because a piston failed on the way home from the Arctic. What clutch do you have? any opinions on the various Marlin upgrades?

I run a Toyota clutch. Many years ago I had a bad experience with a so called heavy duty clutch. With 33" tires I have never had a problem.

Love this rig! Did you tell me that someone here in Burque has the blueprints for the Stout bumpers or can have one made?

I don't think so any more. When Grant moved one of his helpers opened a shop and was making them. That was over a decade ago.

Any more updates on the 3rz? I know this is an old thread but there much be more updates!

Mudder said:
Any more updates on the 3rz? I know this is an old thread but there much be more updates!
Click to expand...

No updates on the 3RZ. I have the conversion engine mounts, and that is it. I keep visiting our local u-pull for an engine, but all they ever have is the 2RZ, or the 3.4 V6. As soon as I see an engine it will get pulled and stashed in the garage. Then I will start moving on the other parts I need for the conversion (oil pan, oil pick up, etc).

I also have a philosophical issue with the transmission. I currently have a R151F which I would not be able to reuse because the 3RZ bellhousing fits a W-series. Marlin used to have a conversion bellhousing to run a R-series transmission behind the 3RZ, but he stopped making them. I really don't want to go backwards. The decision to reinstall a W-56 would be a hard one. Especially since my tax refund is going to rebuild the R151F this spring.
You must log in or register to reply here.
Share:
Facebook Twitter Reddit Pinterest Tumblr WhatsApp Email Link