A pig for Father's Day

I customized the front bumper with extra support, but made my own version of a back bumper. My goal was to make a rear bumper that was close looking to a stock one and not look so modern. I will revisit this design at another time, just turned out too square looking to me.

scrapdaddy said:
I customized the front bumper with extra support, but made my own version of a back bumper. My goal was to make a rear bumper that was close looking to a stock one and not look so modern. I will revisit this design at another time, just turned out too square looking to me.
Click to expand...

My pig came with a new OEM rear bumper. The reason I was investing so much thought into the front bumper and winch now and not later is because I want to get the new rear bumper painted and installed and it seemed a waste to go to all that trouble for the rear and not paint the front at the same time.

scrapdaddy said:
I will revisit this design at another time, just turned out too square looking to me.
Click to expand...

Fits the look of your rig though.

I believe a section of 2"x4" tube will just slip into the channel of the factory bumper. You could build an inner bumper out of 2x4 tube that extends out wider than the frame rails, weld on the tabs you will need to attach it to the frame and existing frame horns and weld on the winch plate. Then just slip your factory bumper over the tube and bolt it on. It can be done for less than $100. You will probably end up cutting a hole through both the inner and outer bumpers for the fairlead. If cutting your factory bumper for the fairlead is not an option, winch placement will either be up really high (blocking a lot of the grille) or really low (approach angle obstruction).

When I built my bumper, I had originally thought that I would do it this way, but my original bumper was so mangled that I decided not to use it.
Last edited: May 14, 2020

No issue cutting the bumper for the fairlead. I think an 8274 is visually a bit intrusive mounted above the bumper and as you mention there's the air flow concerns.

I’ve been taking the pig out for exercise quite a bit lately. Up to around 70mph it does great. AC is working fairly well and new alternator seems to be keeping up. Really, really enjoying driving it.

Appreciate everyones help and advice over the last year.

That's what it's all about.

scrapdaddy said:
That's what it's all about.

Exactly! It is why we do what we do!

The pig has landed. 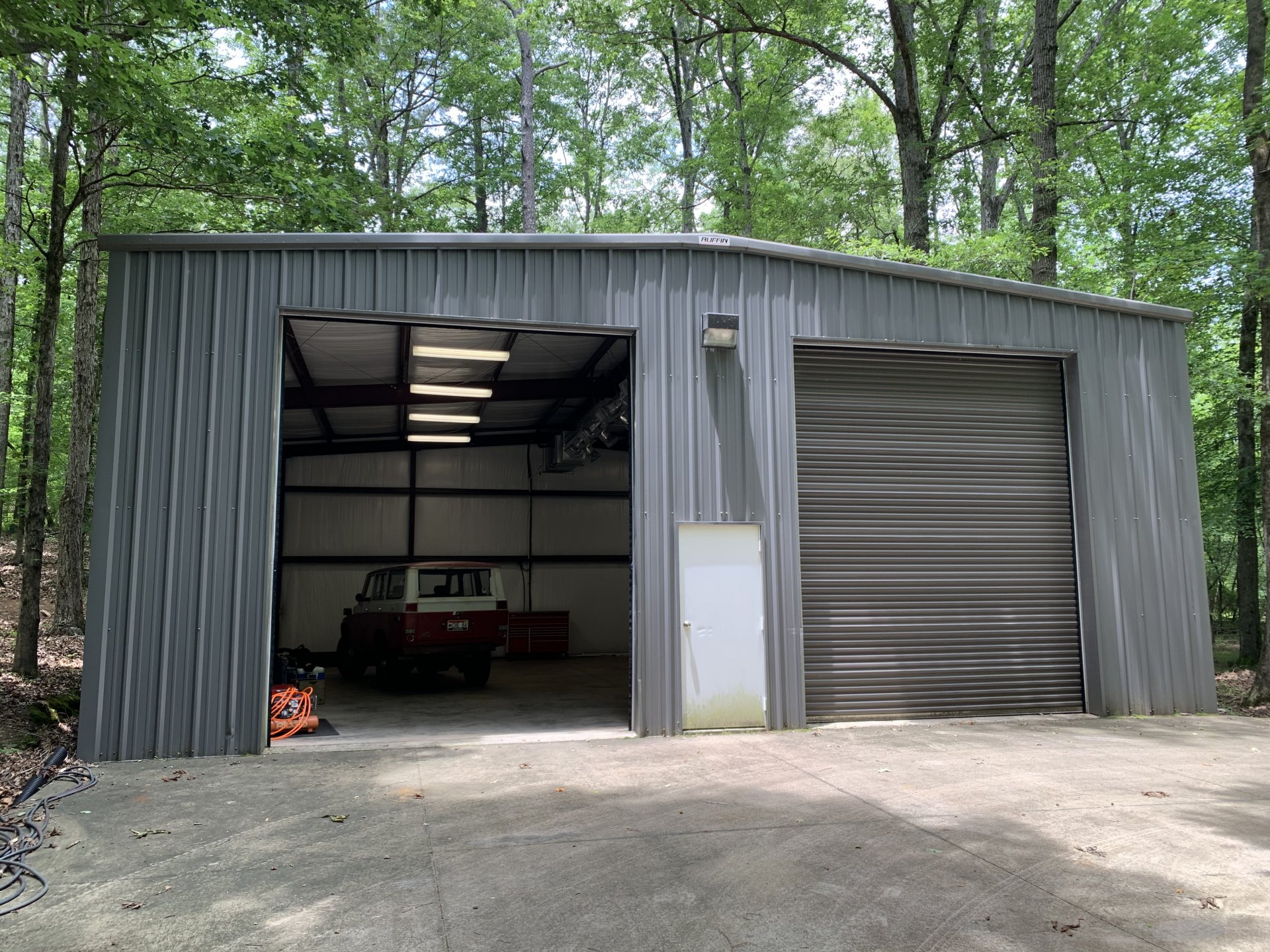 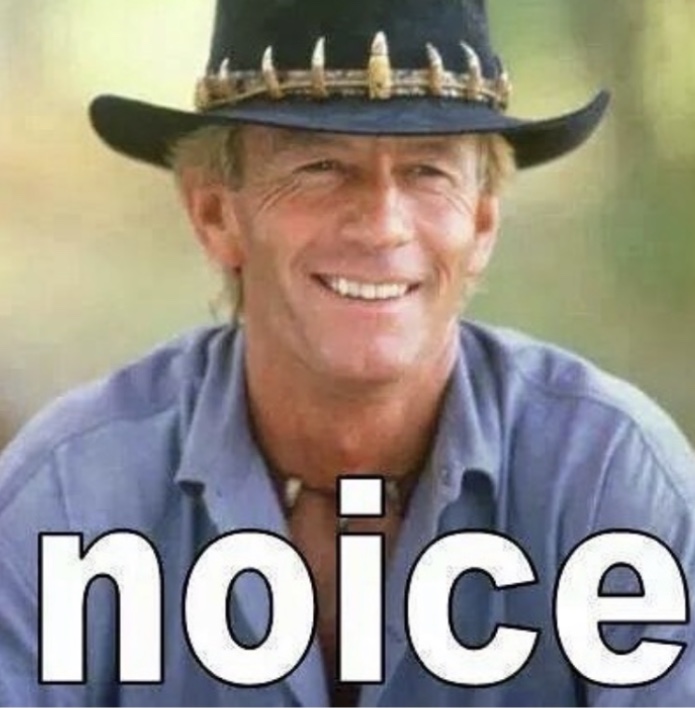 Thanks. We’re pretty psyched. Very happy with the house. Shop was a nice bonus.

Ya you need more Piggies

. Way too much room in there

Not to take away from your wagon, but that's a great shop. Like Bob said, now you have to fill it up!

scrapdaddy said:
Not to take away from your wagon, but that's a great shop. Like Bob said, now you have to fill it up!
Click to expand...

Thanks. Lots of decisions to make but it’s a good start. Well insulated with AC and heat. Need to figure out interior walls eventually. I have some nice double-wall metal cabinets that I will need to hang....don’t think they’ll hang off the insulation. I wish I could lay block, I would use 4” CMU up to the first girt which is around 7’ and sheetrock above that. I think the walls are around 16’ but I haven’t measured them. Doors are 12 x 14.
Last edited: Jun 3, 2020

. Spend all your $$ on walls you want have enough for the good stuff

. I still play in the DIRT

. Spend all your $$ on walls you want have enough for the good stuff

. I still play in the DIRT

I understand. Already looking at lifts.

But they are nice cabinets. Could probably use a few more in this shop though.... 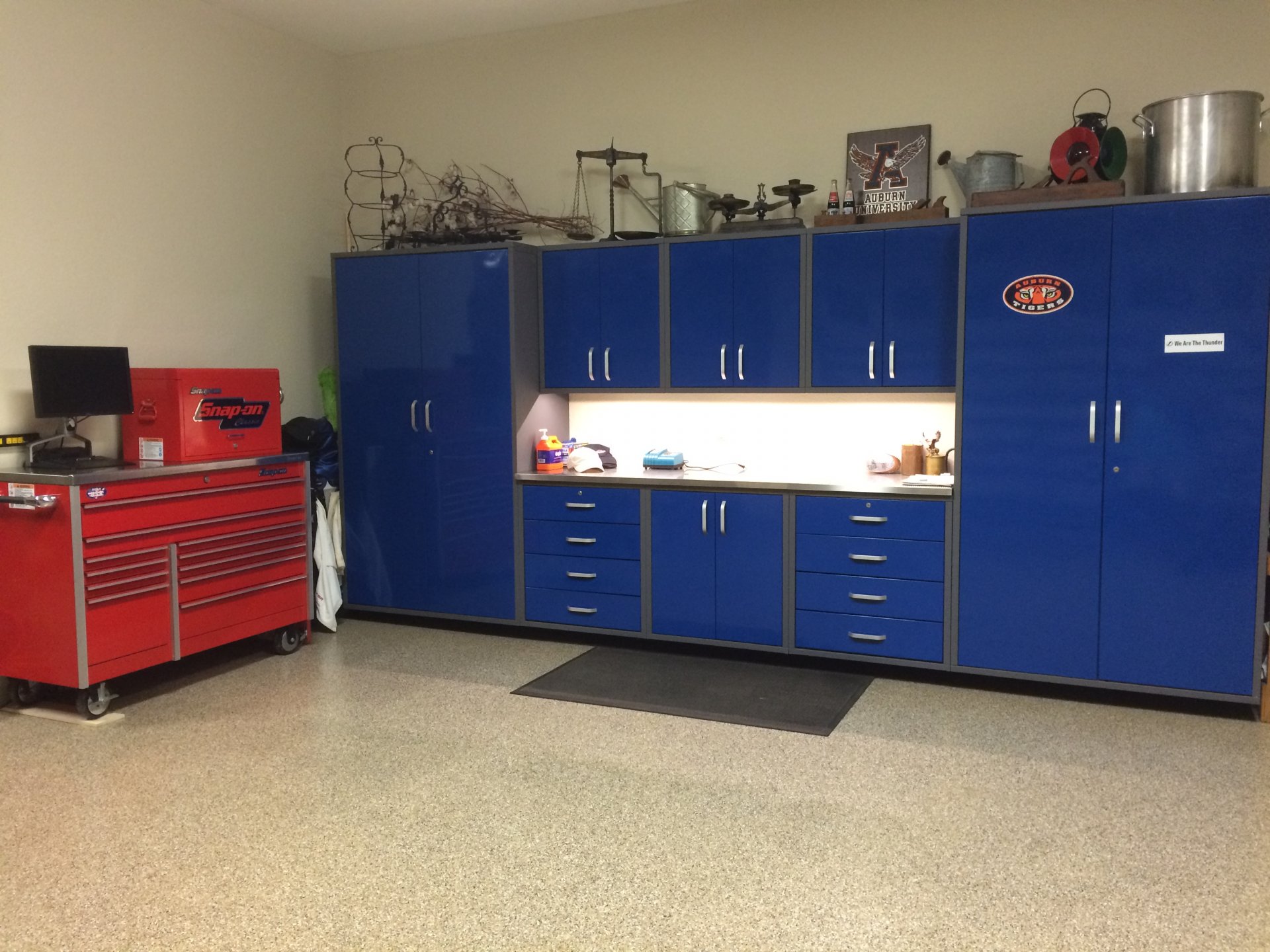 I bought a lift of reject good one side 1/2” plywood to do my shop, no drywall, easy to mount stuff anywhere and easy to find a stud for heavier items...whatever you choose will be awesome in a shop that nice.

In my son-in-law’s ship we insulated and then did sheets of particle board 4’ up topped with pegboard sheets another 4’. Inexpensive. White pegboard enhanced available light and offers multiple hanging/shelving options.

So my pig has been squealing worse than Ned Beatty having a bad day when the A/C compressor kicks in. It doesn't happen all the time but has quickly gone from some of the time to most of the time. In addition, there is a very high frequency sound when driving at speed some of the time. I'm not sure if the two noises are related but have speculated that maybe the A/C clutch is starting to go? The pig squeal sound is definitely coming from the belt slipping on the A/C pulley as I have witnessed that. I haven't tracked down the source of the higher pitched sound.

Thought I would start with the basics. Does this belt look correctly sized or is it too small in cross section? The belt drives the A/C and alternator and wraps around double pulleys at the engine main and water pump. The belt looks to be the same size as the water pump belt.

This particular belt broke when my BIL was driving the pig home from the PO so it's a fairly new belt. Of course in looking this morning it appears that a good 10% of the belt is all over the front of the engine bay in the form of very fine particles.

Not sure if I should try a new belt or go get the A/C compressor clutch checked out? 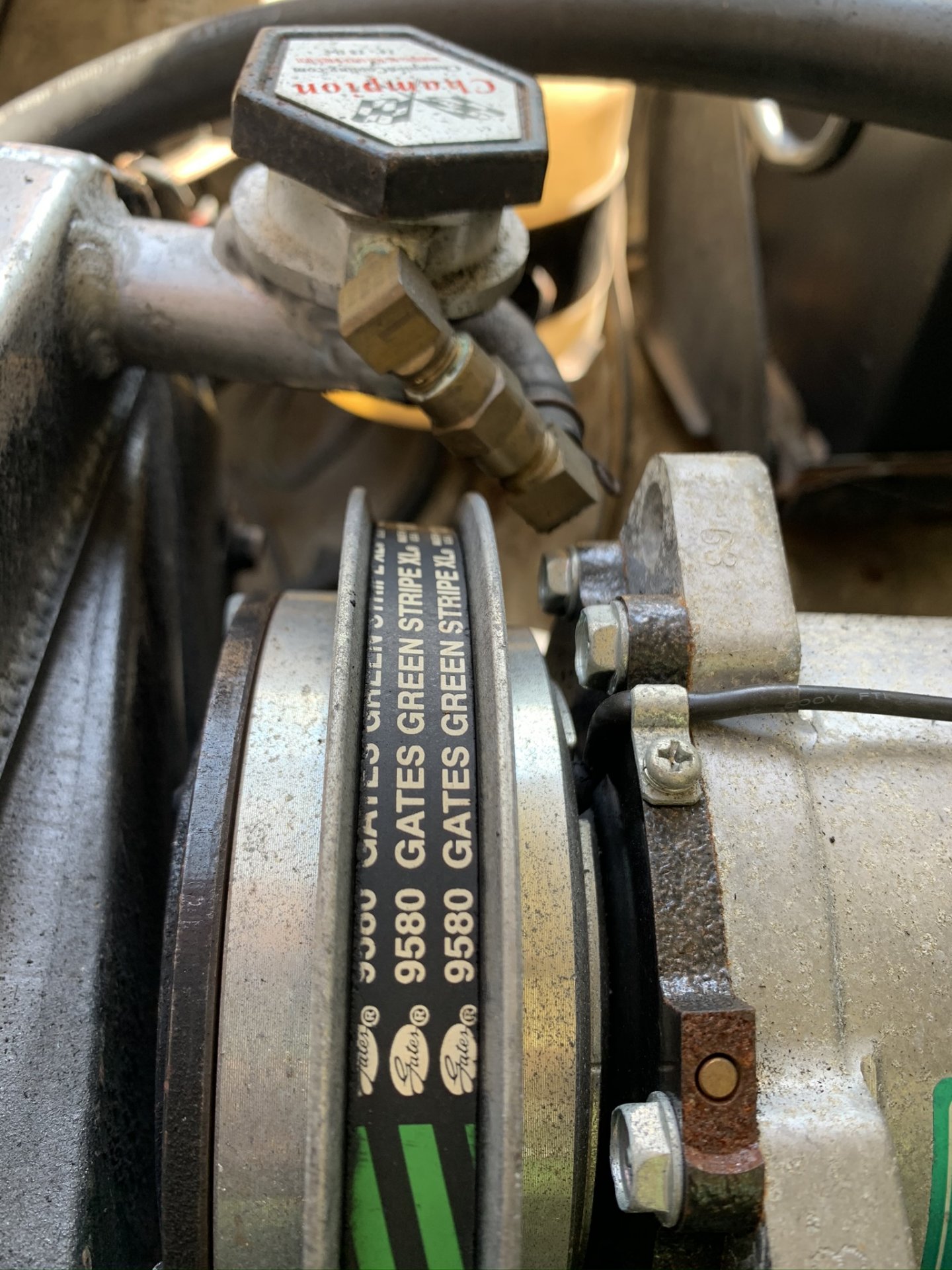 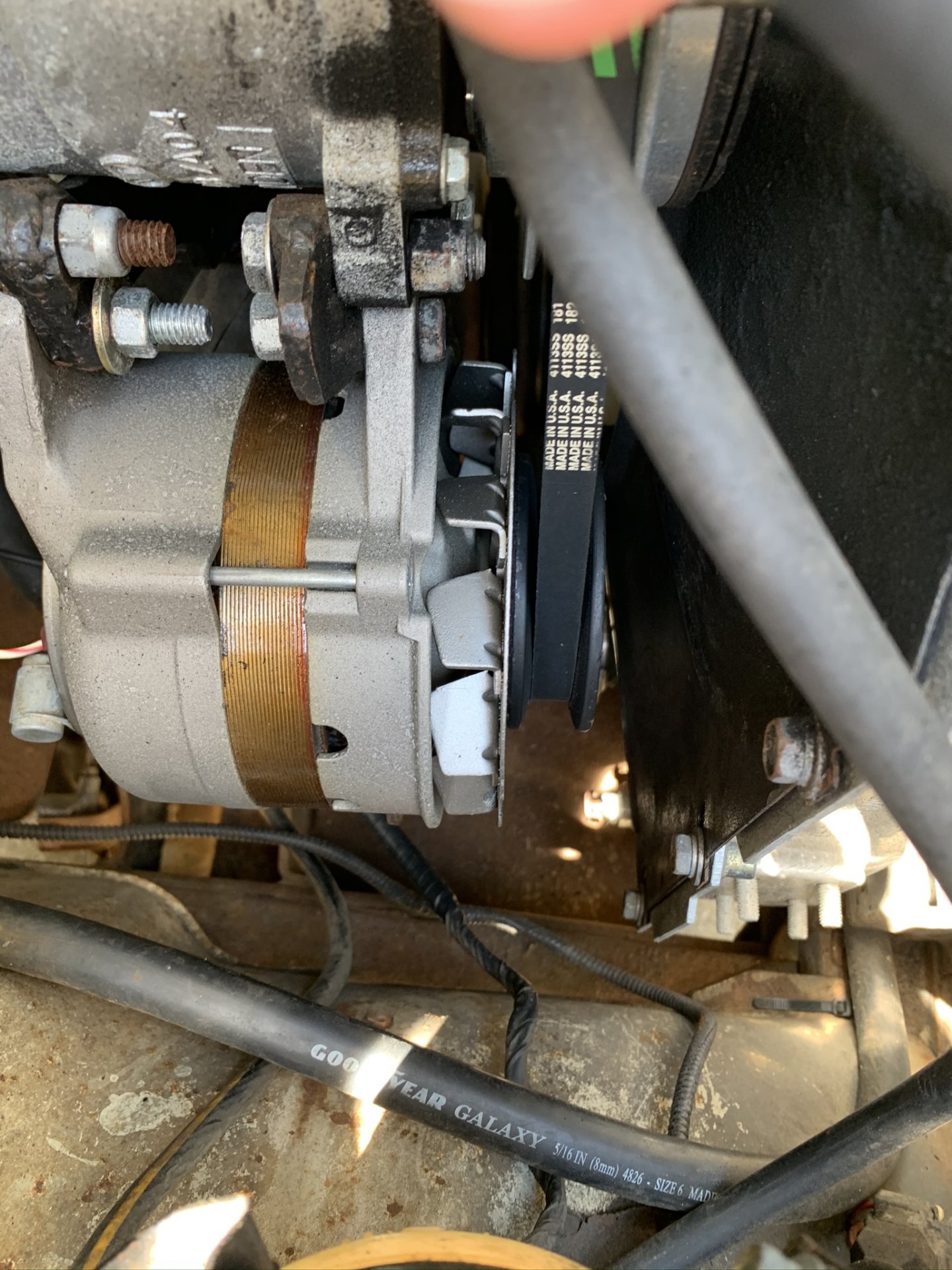 Looks too narrow and is probably running in the trough as opposed to the sides where it should be.
A draw on the alternator from the AC system *might* be causing the alternator to drag slightly which *might* be the second noise. If any of the mount bolts are loose and the brackets/mounts flex causing misalignment on the belts, or any misalignment in general, can cause squealing and premature wear.
Last edited: Tuesday at 10:50 AM
You must log in or register to reply here.
Share:
Facebook Twitter Reddit Pinterest Tumblr WhatsApp Email Link

For Sale Pig in CA
2