I recently purchased this 464 Beige '82 FJ40. The seller had an ad on the local Craigslist for a different truck (a mustard '75 that was listed incorrectly as a '77 but that is a different story). Craigslist gives the seller the option of adding a map of the general location of the item to be sold. I recognized the area on the map as being near the North and South Carolina line in the Dudley area outside of Pageland, SC. It is a rural area that is extensively farmed by a local farming family, the Cox's. The Cox family farms roughly 15,000 acres of crops. They also raise chickens and hogs on a large scale. They are the biggest farm producers in Noth Carolina and are well known in our area. I had been told years ago that the Cox brothers had several old Land Cruisers stashed away in barns. I had never seen them or had the opportunity to ask about them.

I inquired via text about the mustard "77" Land Cruiser on Craigslist . I asked a few questions and it was apparent that the seller did not know much about the truck. He thought it was a '77 (turns out that it was really a '75). He wasn't sure. He told me that the truck belonged to his 81 year old grandfather and that he was just listing it for him. "Your name wouldn't happen to be Cox, would it?," I asked. He replied, "Well, my grandfather's name is Cox. It's his truck." "I have been told that y'all have several Land Cruisers, right?" "Yes sir." "Are they for sale?", I asked. "Maybe. We have an FJ60 and another FJ40 in the shed." I told him I'd be there Saturday morning to look at them.

On Saturday I arrived at the Cox farm and was greeted by grandpa Cox. He showed me all the trucks but this '82 40 was definitely the cream of the crop. The mustard '75 was really rough. There was an '84 FJ60 is great shape as well, but this 40 was special. Mr. Cox knew it was. I asked him if he would sell it to me and he said he would consider it, but that there was someone in Connecticut who had made on offer on the truck and wanted to do a total restoration on it. Apparently, the person in CT was in the business of restoring and selling Land Cruisers. I knew this truck held good memories for Mr. Cox and I knew that he didn't want to see it go. "You don't want to sell this truck away to CT, do you?", I asked. "Not really. I'd rather be able to see it from time to time.", he replied. "Then sell it to me. I'll match CT's offer. I'll keep it local and I'll bring it by from time to time so that you can keep tabs on it.", I responded. "Well, we will see.", he said. He and I talked 'cruisers for an hour or more and I left the farm with the '82 40 on my mind. A few days later we talked again and he told me to come get the truck. 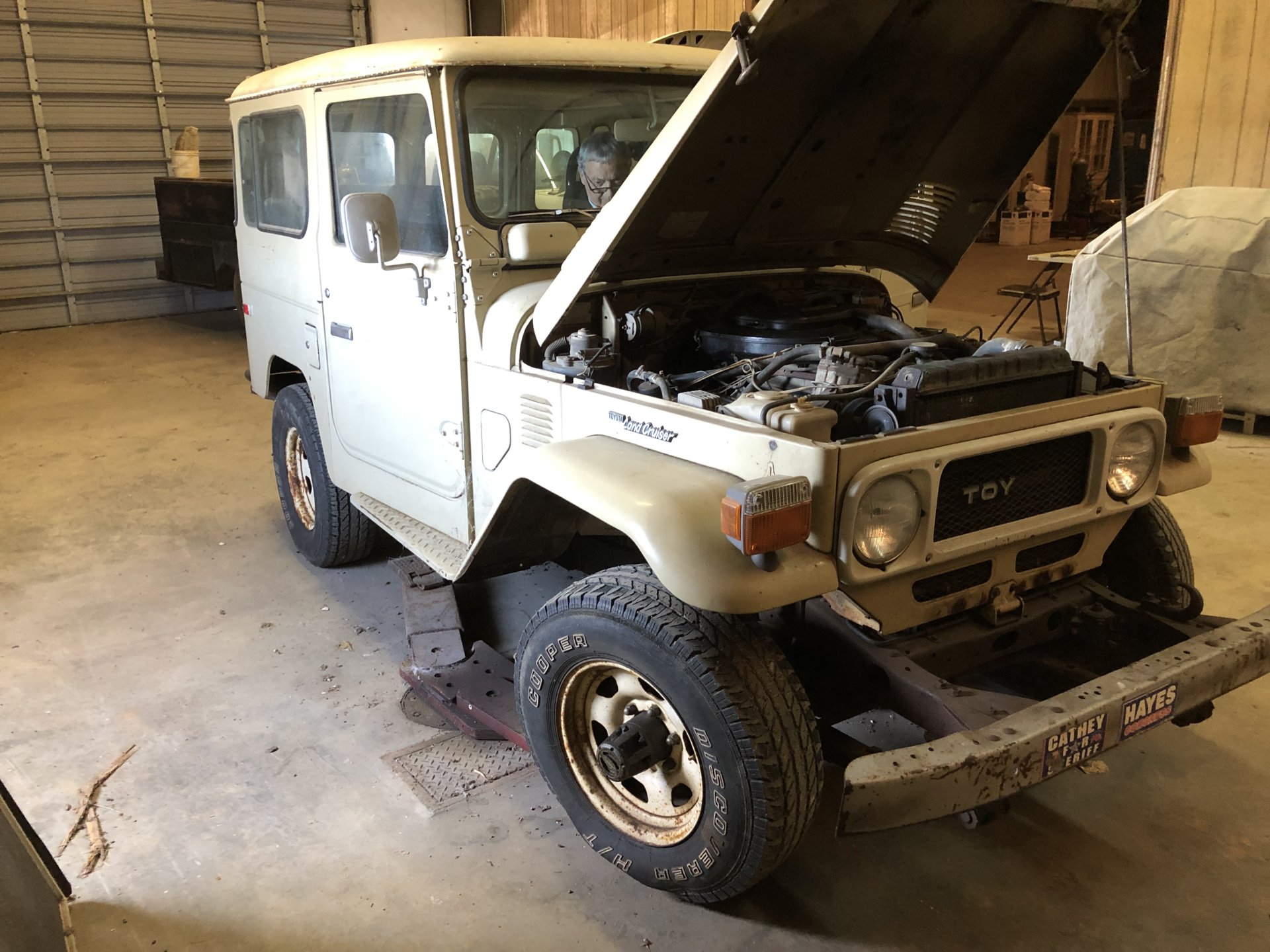 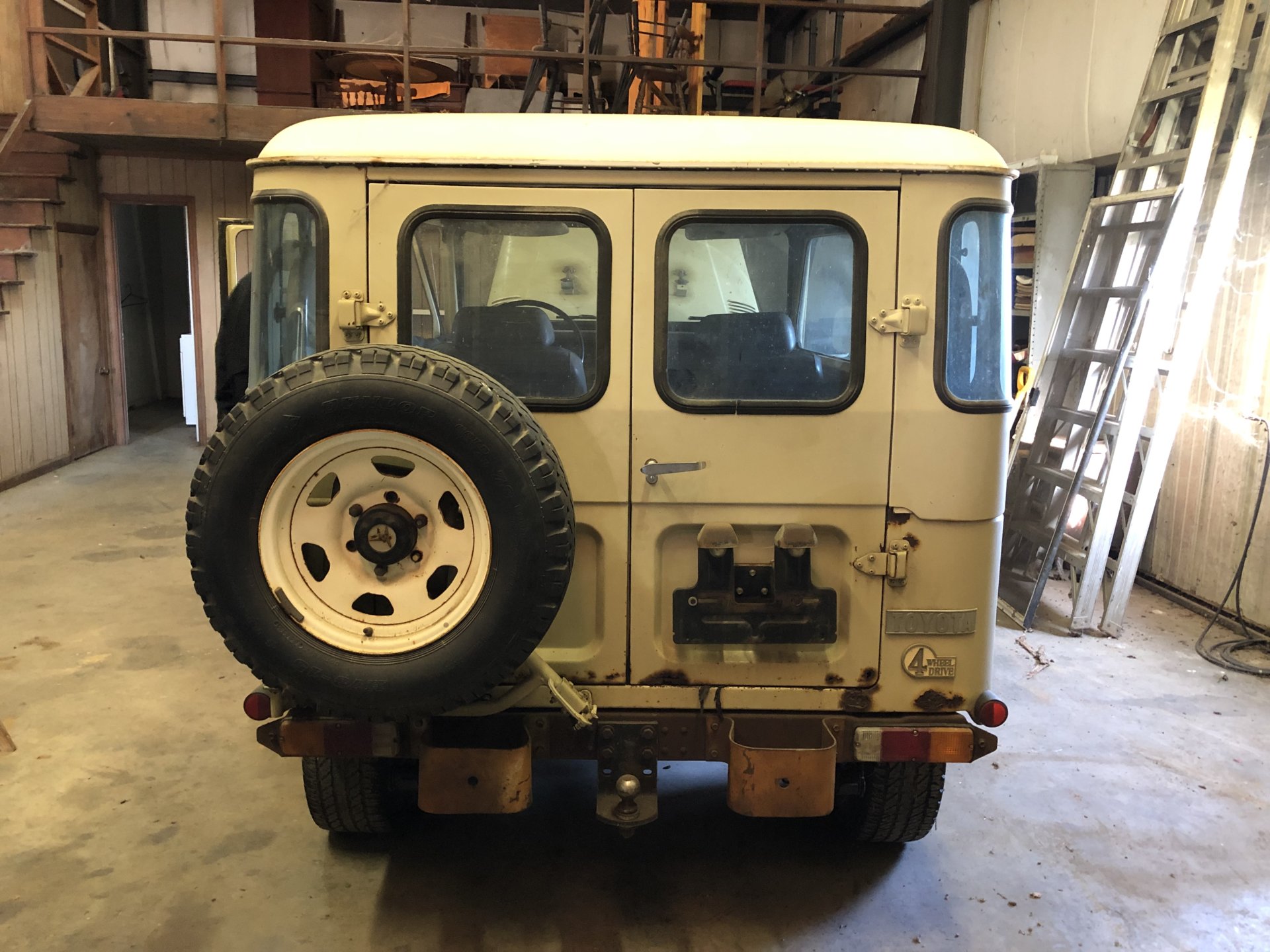 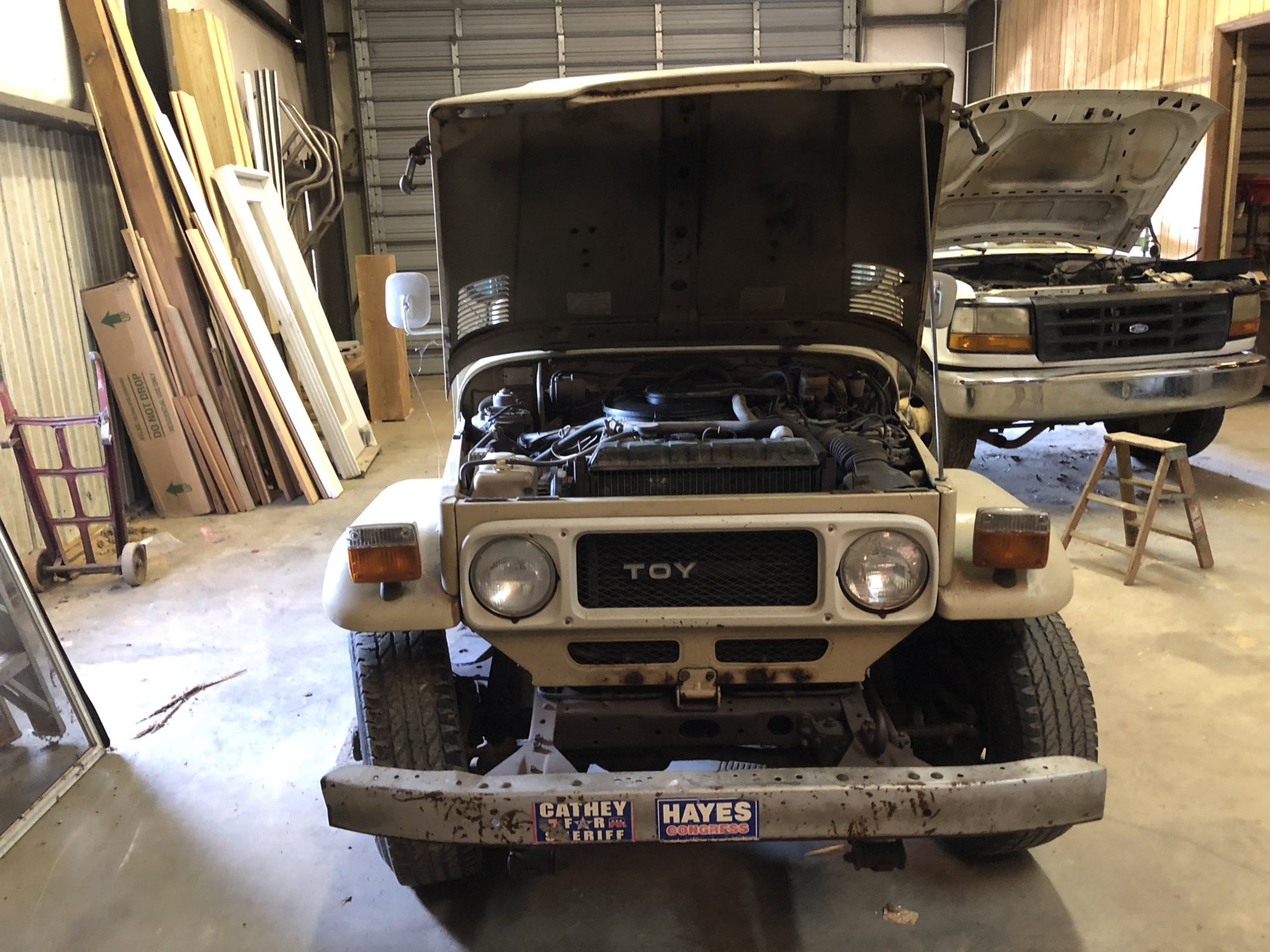 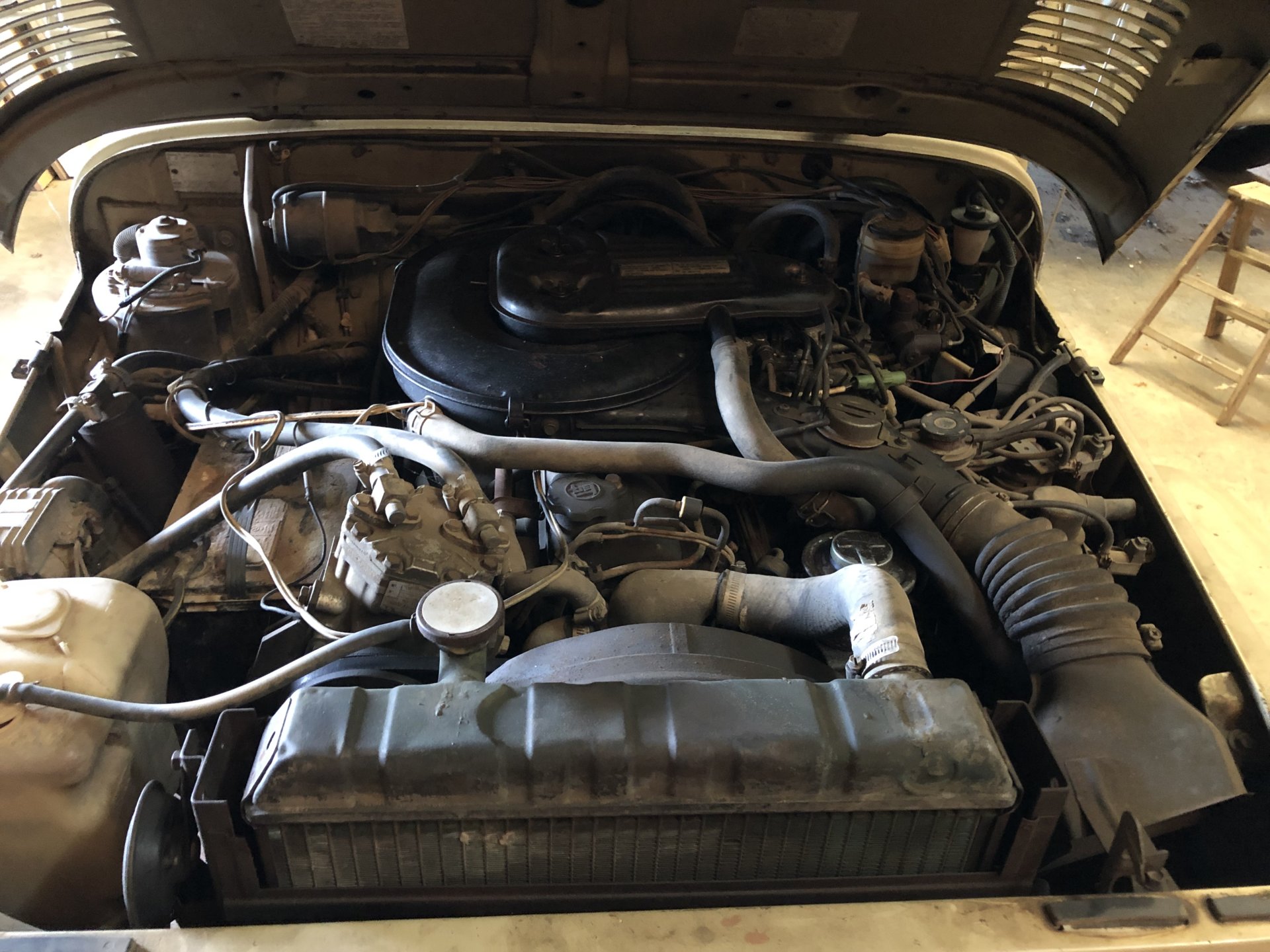 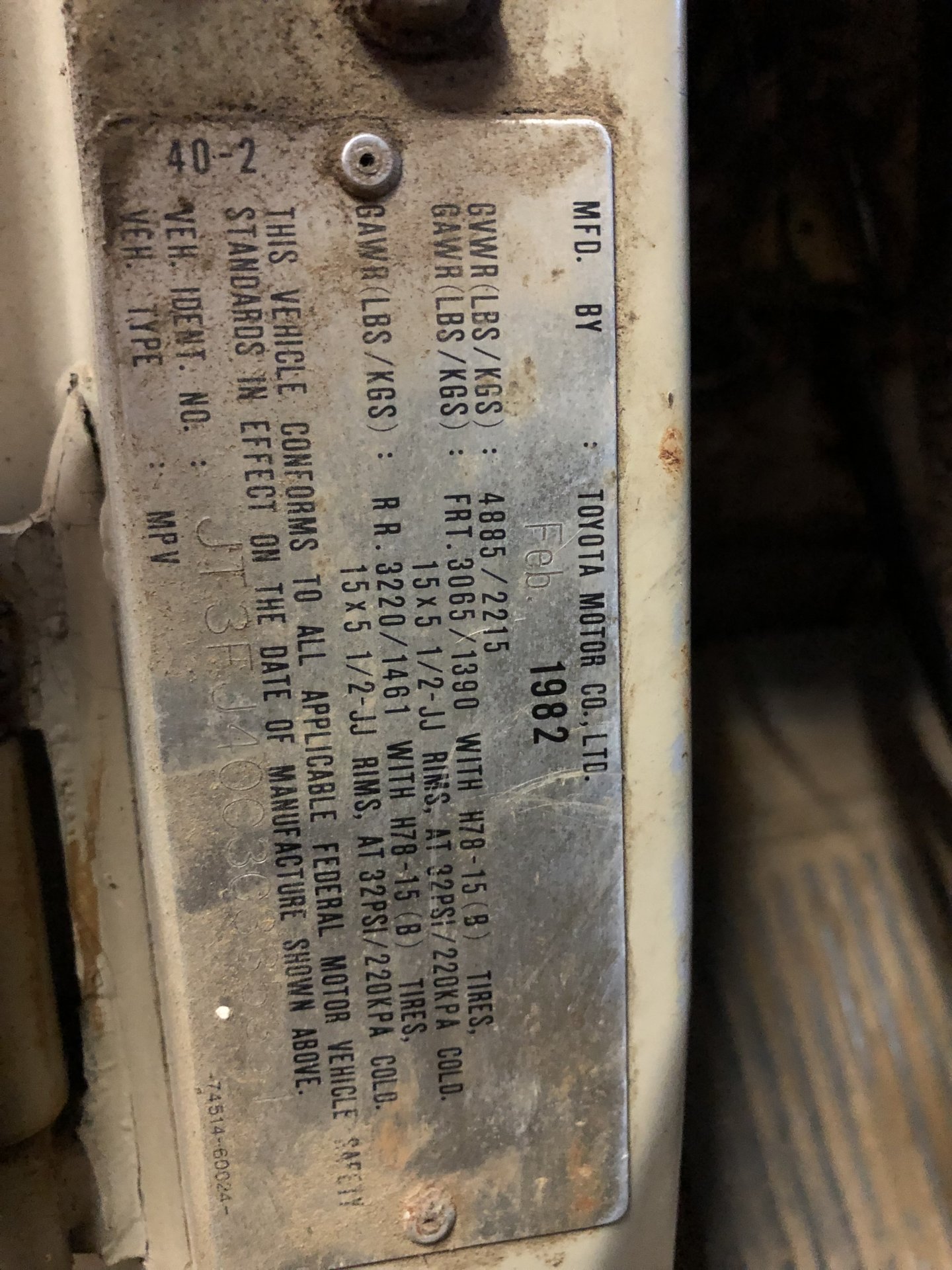 This truck is equipped with factory power steering. It also has air conditioning and cruise control. I suspect that the air and cruise were dealer installed options. The ac uses a York compressor and not a NipponDenso. I don't know much about factory air for the 40 series. The install is well done enough that it could be factory, but I just need to research a little more on it to be certain.

The truck was used on the farm from '82 to '02 and parked in an old chicken house for 15 years before it was moved into the fully enclosed "equipment shed" you see in the picures. Mr. Cox put the truck on the lift and sprayed down the underside with diesel fuel a couple of years ago to keep the rust at bay. It is covered inside and out with layers of fine dust that have proven to be impossible to clean..especially out of the interior. Hence the name, Dusty. 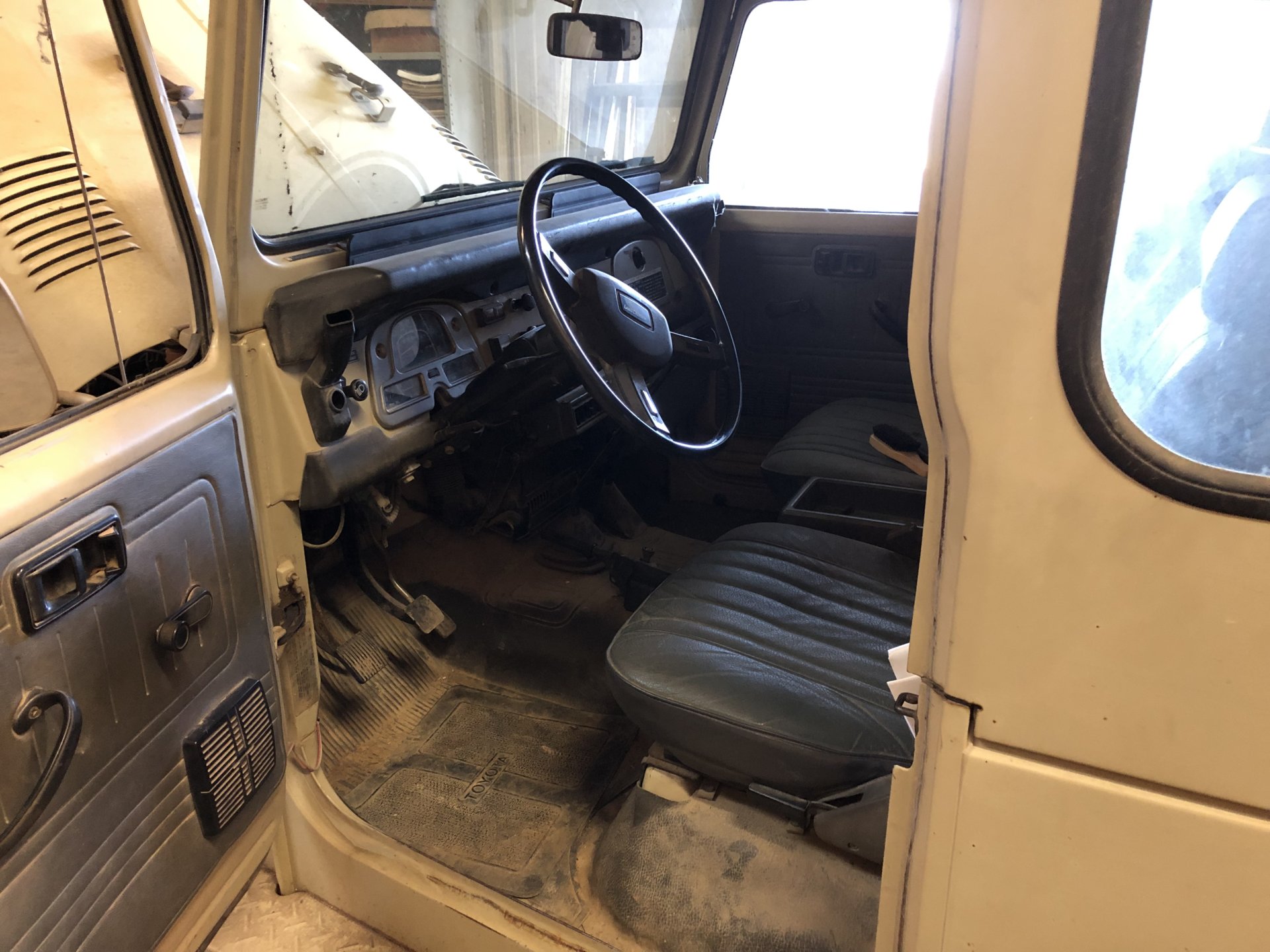 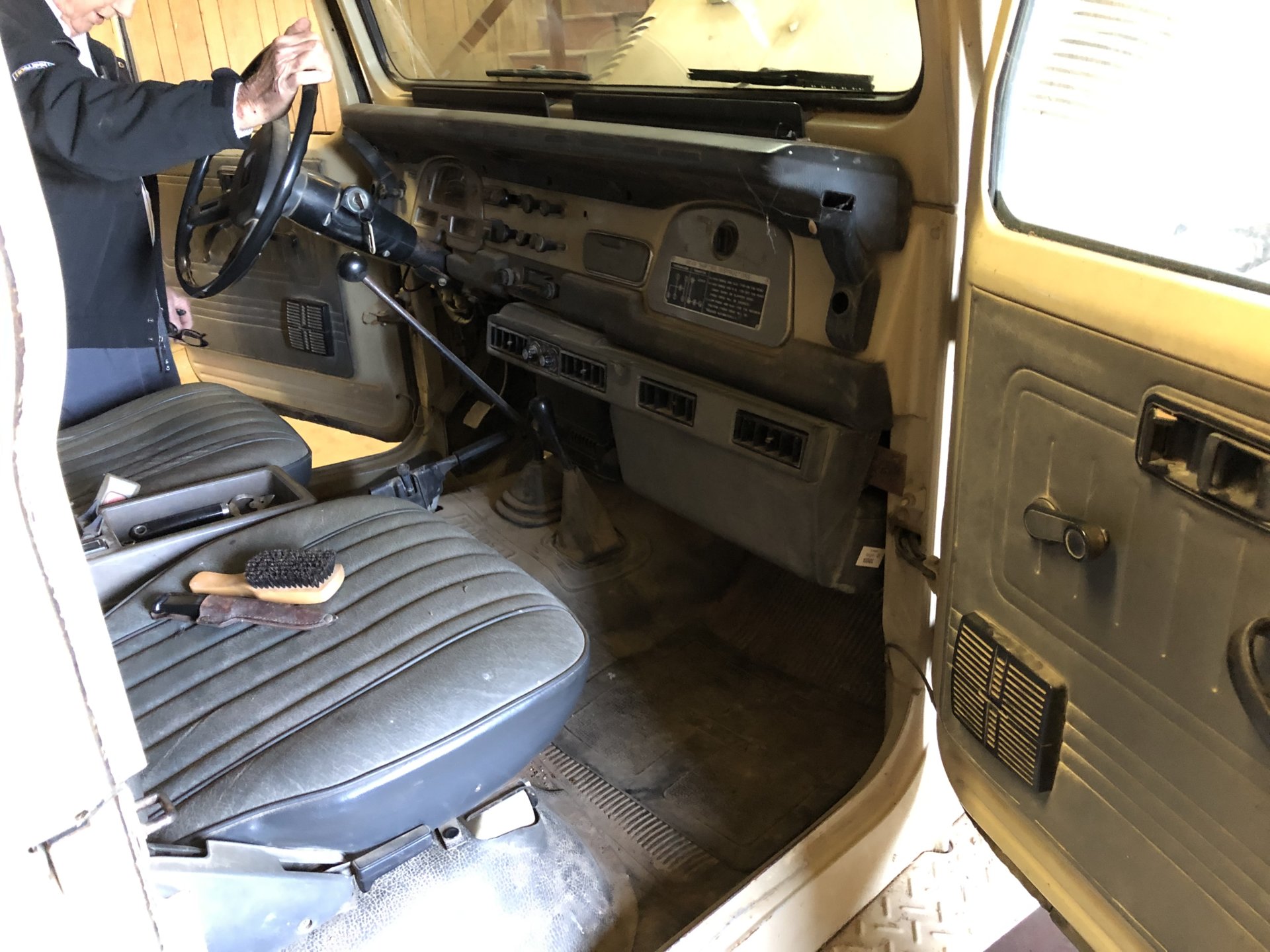 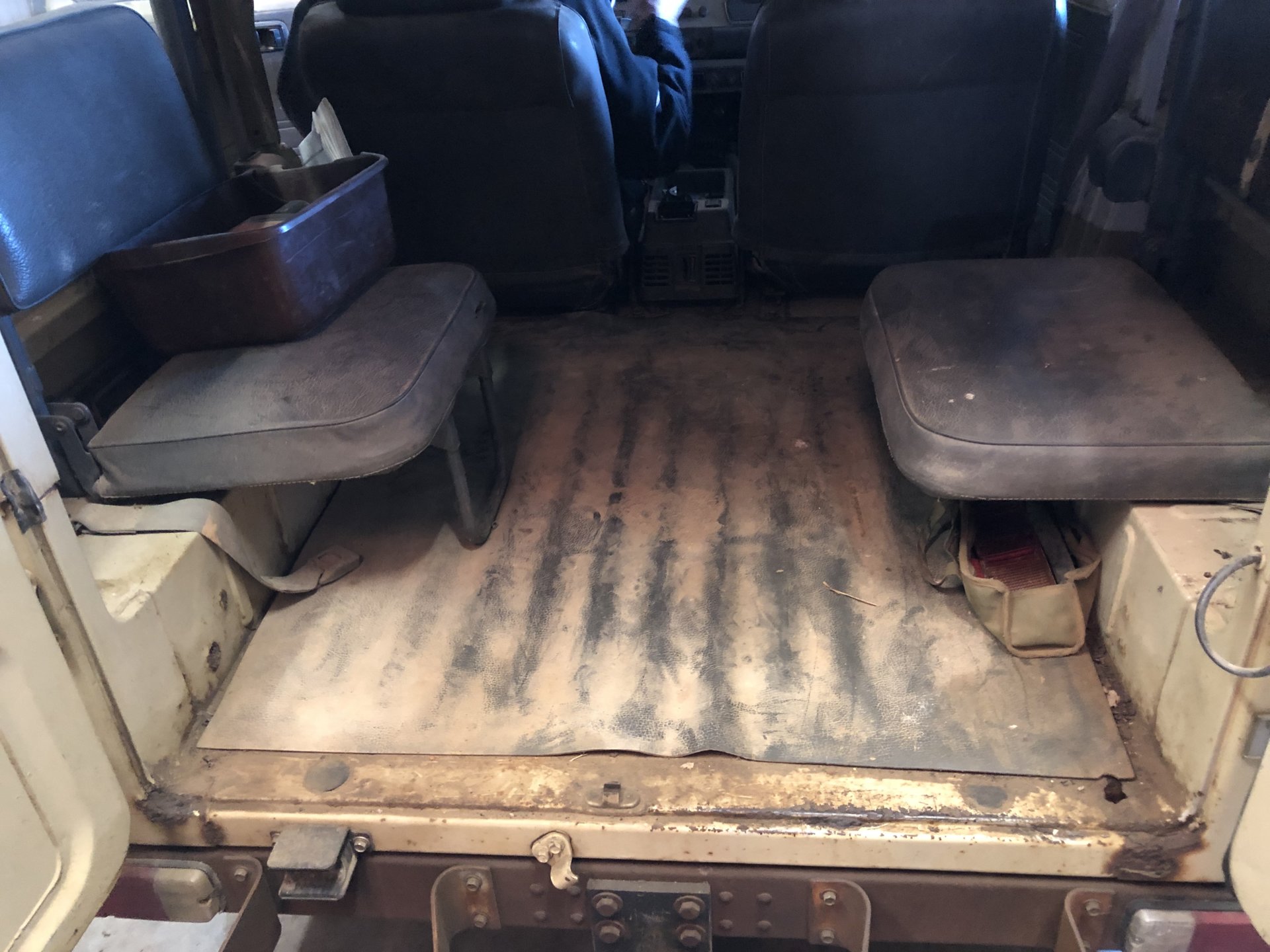 I trailered the truck home and my kids and I started cleaning it up a little. We removed two mouse carcasses and many, many dirt dauber's nests and paper wasp nests. Luckily, no spiders or snakes...yet. 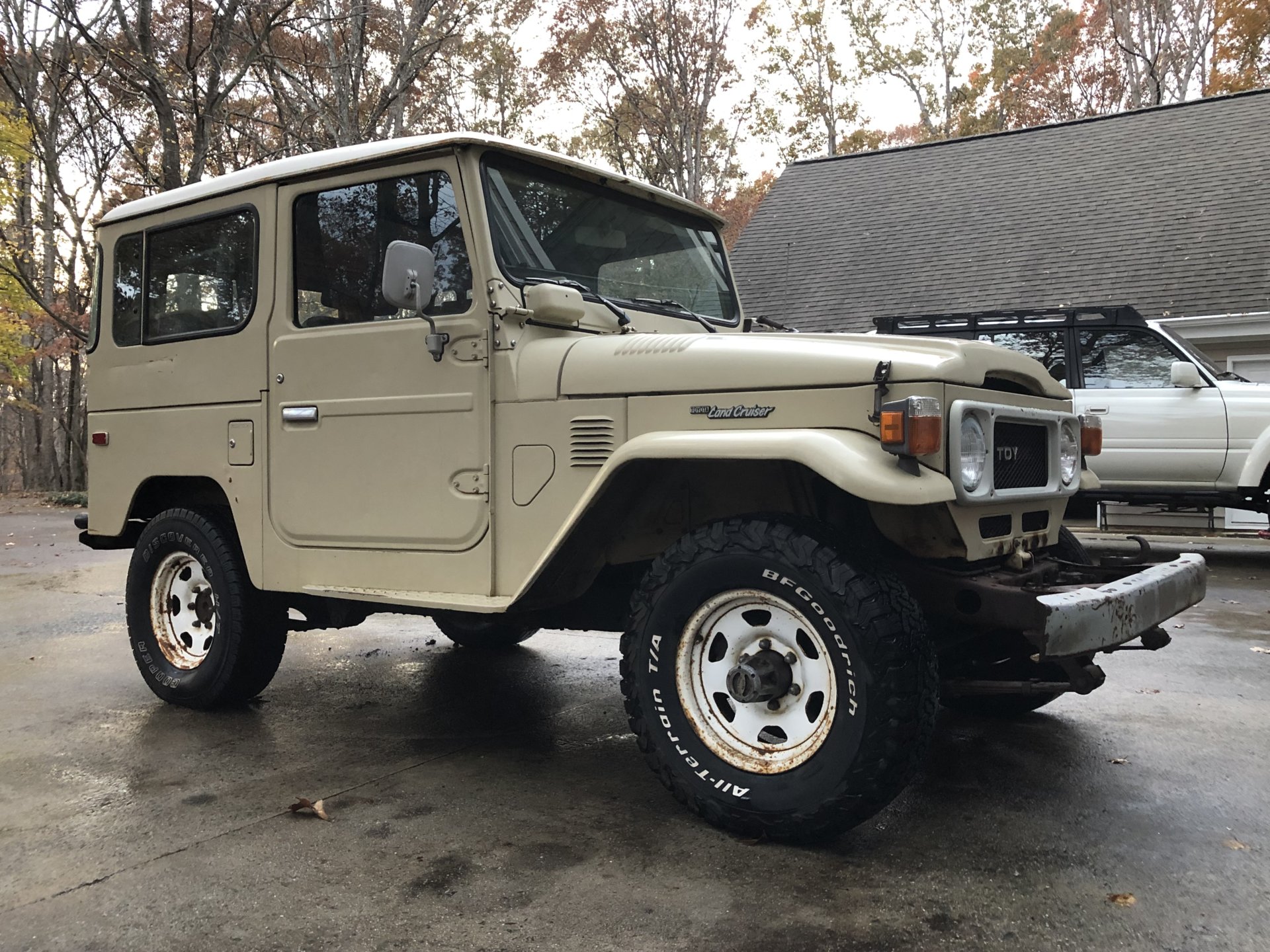 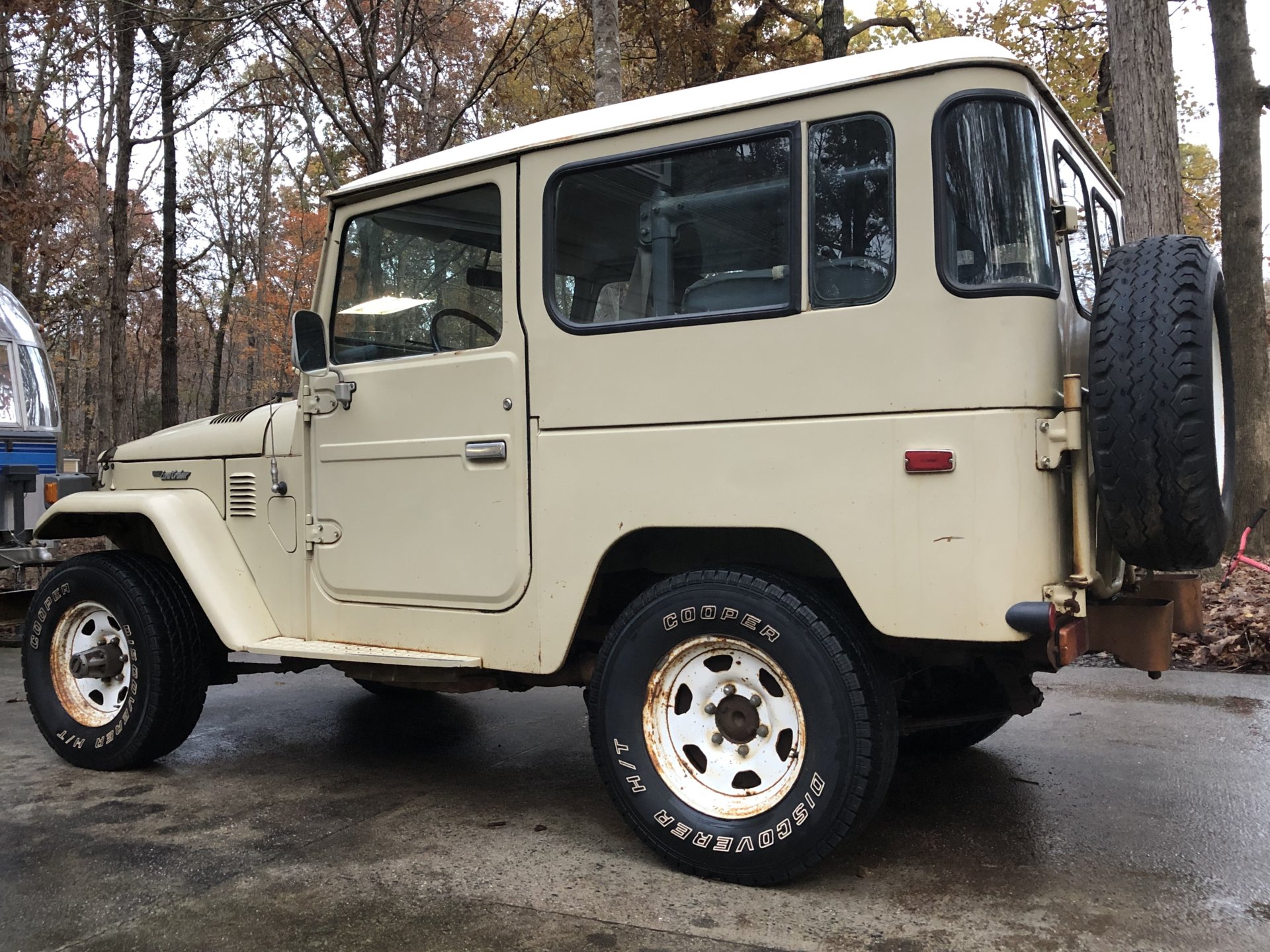 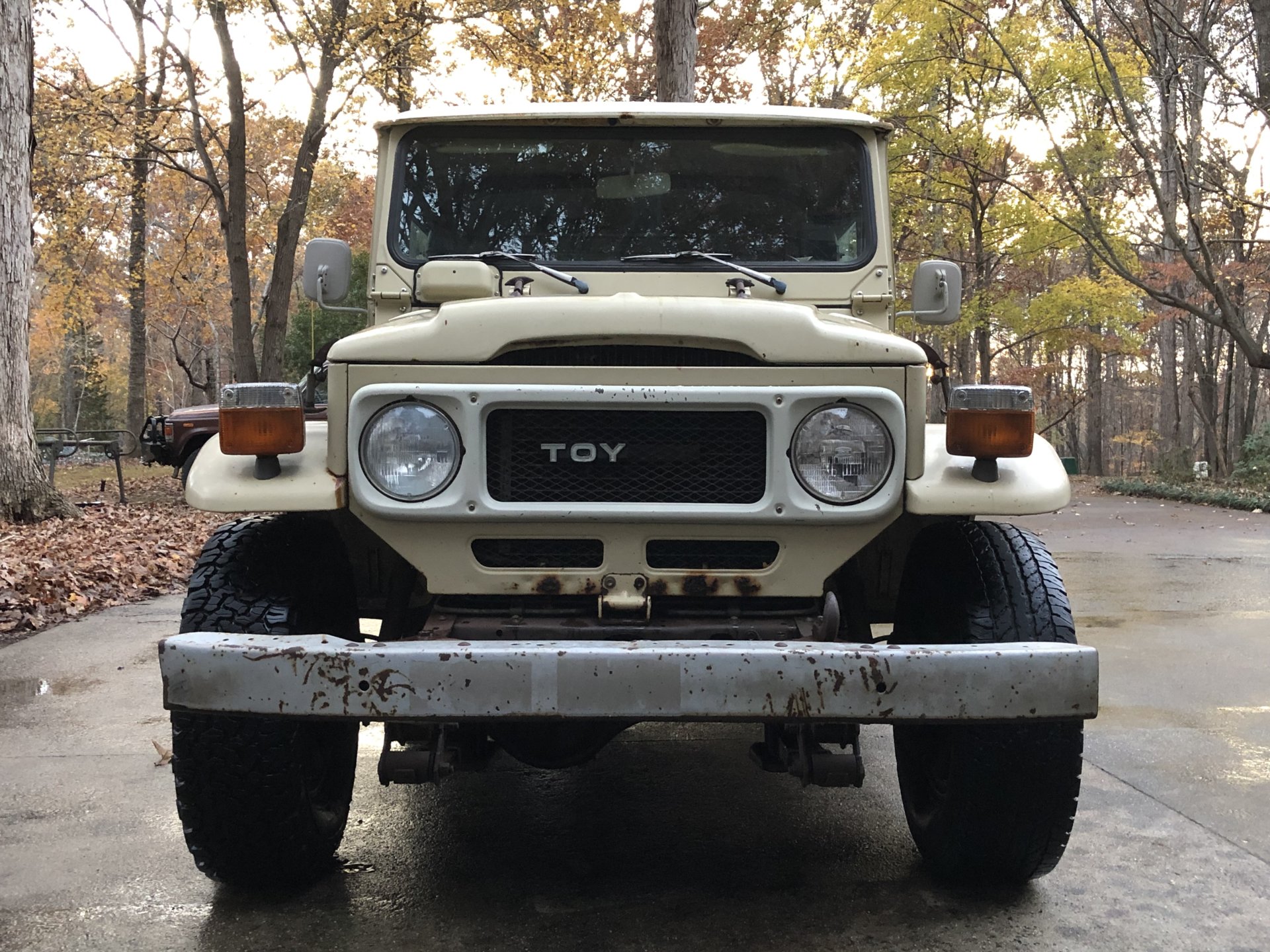 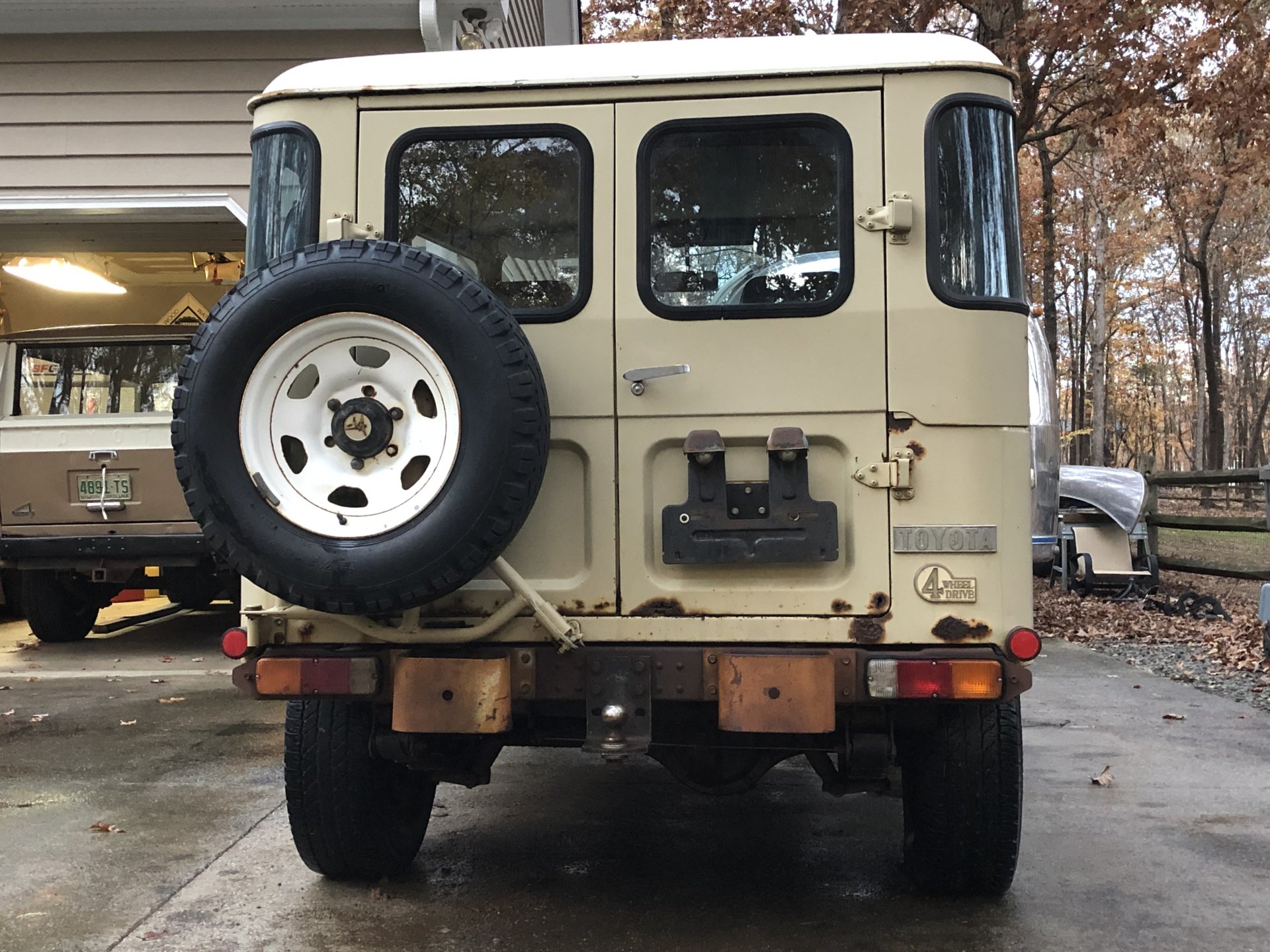 I pulled the mats out and gave them a good scrubbing. I then focused my attention to cleaning up the interior and addressing the rusty spots. This truck has some rust, but what '79 - up trucks don't? My plan is to treat the rust for now and at some point, cut it out and weld in patches. I am knee deep in a really rusty FJ55 project (Bucky) at the moment so the rust on this 40 will have to wait. It will live inside the garage anyway, so the rust should not get any worse. I decided to wire brush the rust spots and treat them with Penetrol. That should hold them until I can do proper repairs. 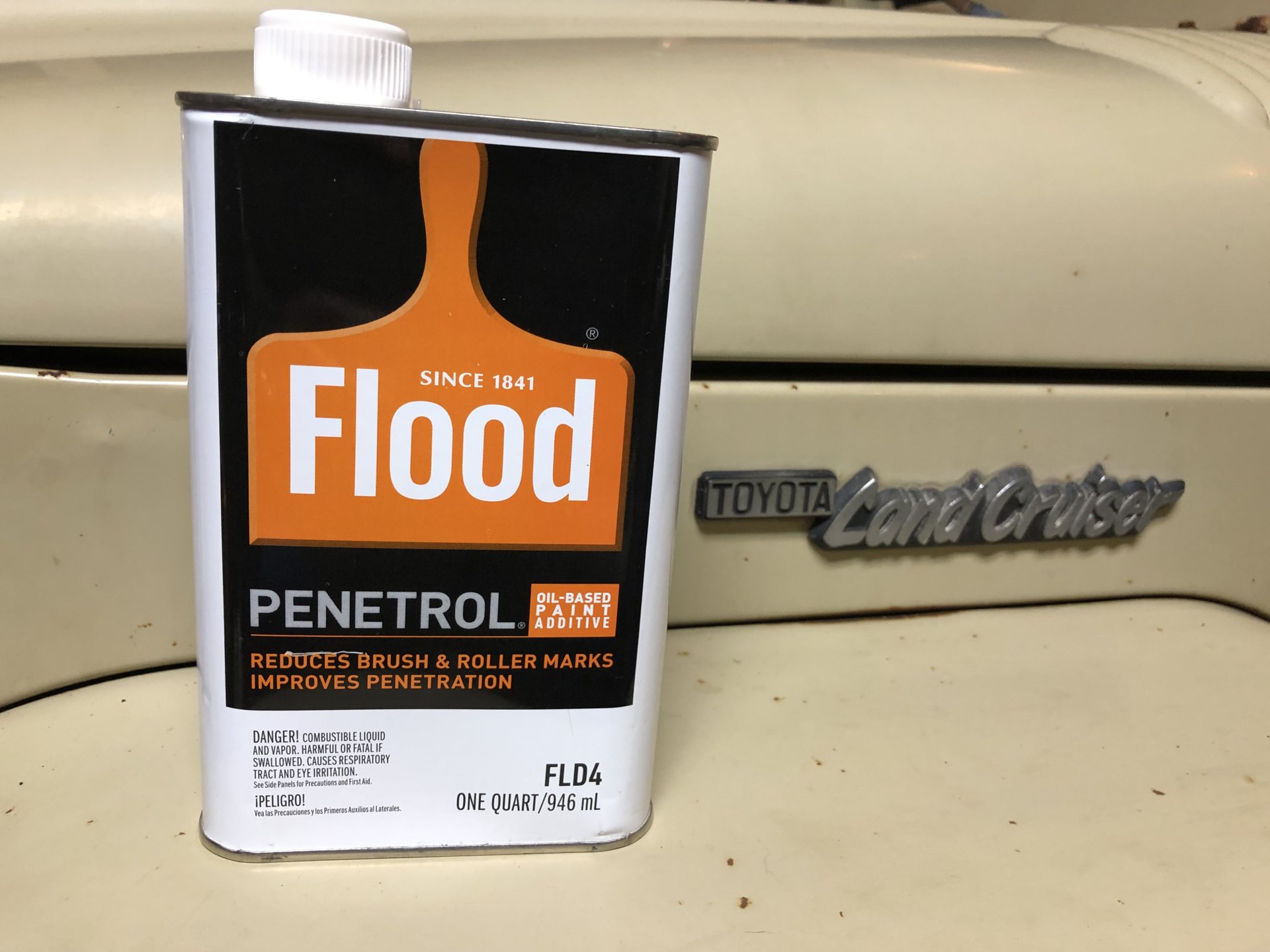 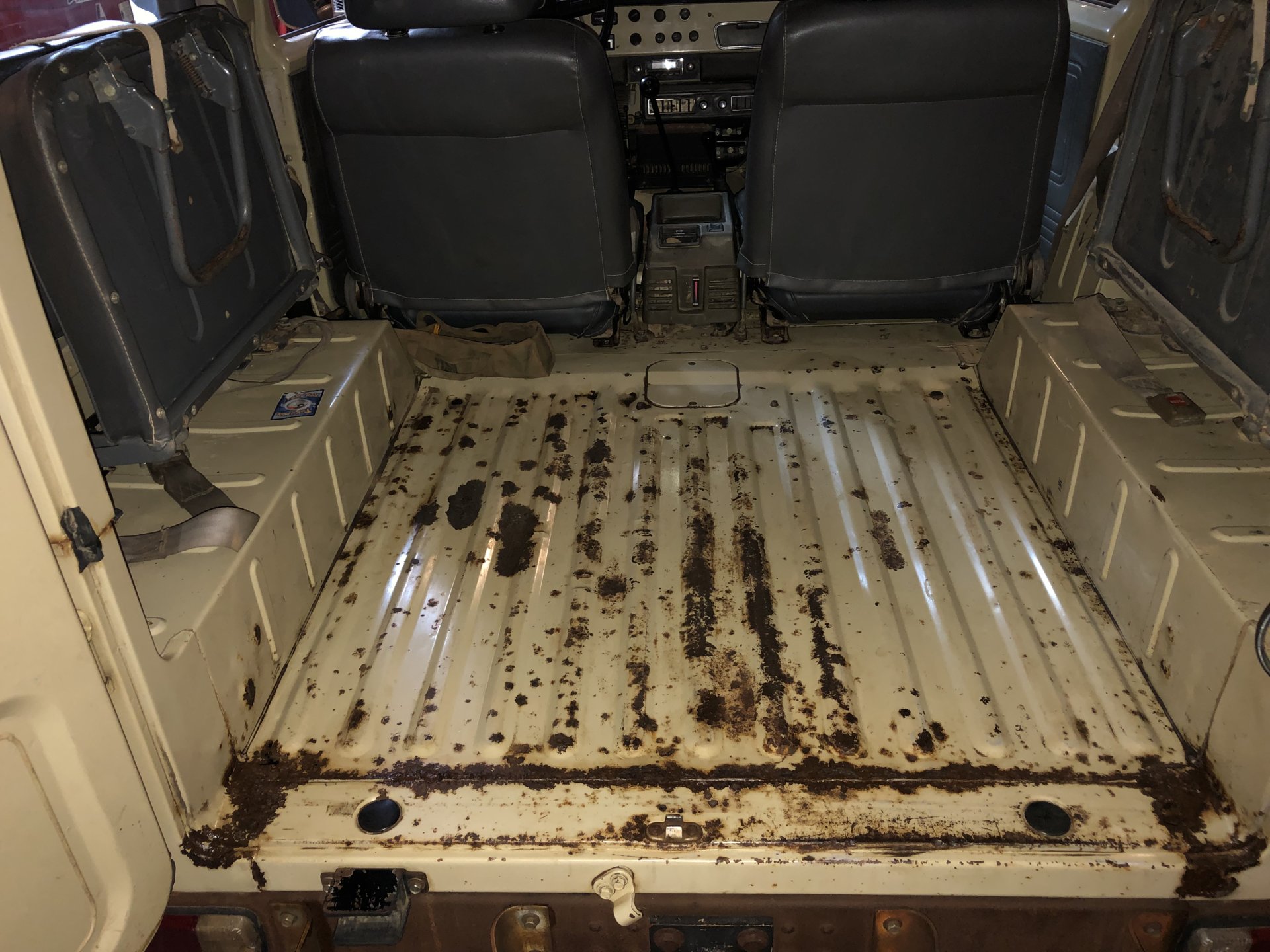 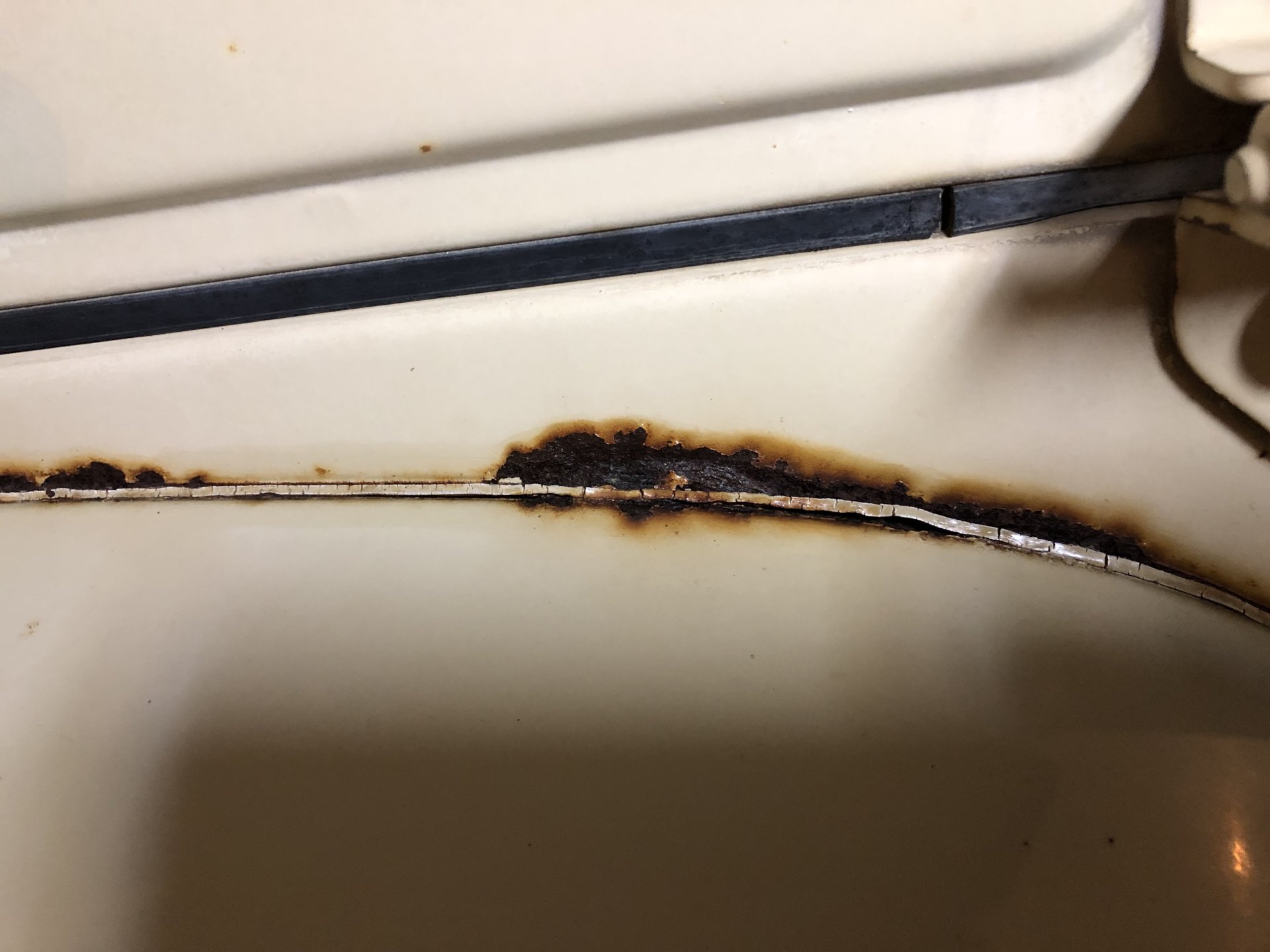 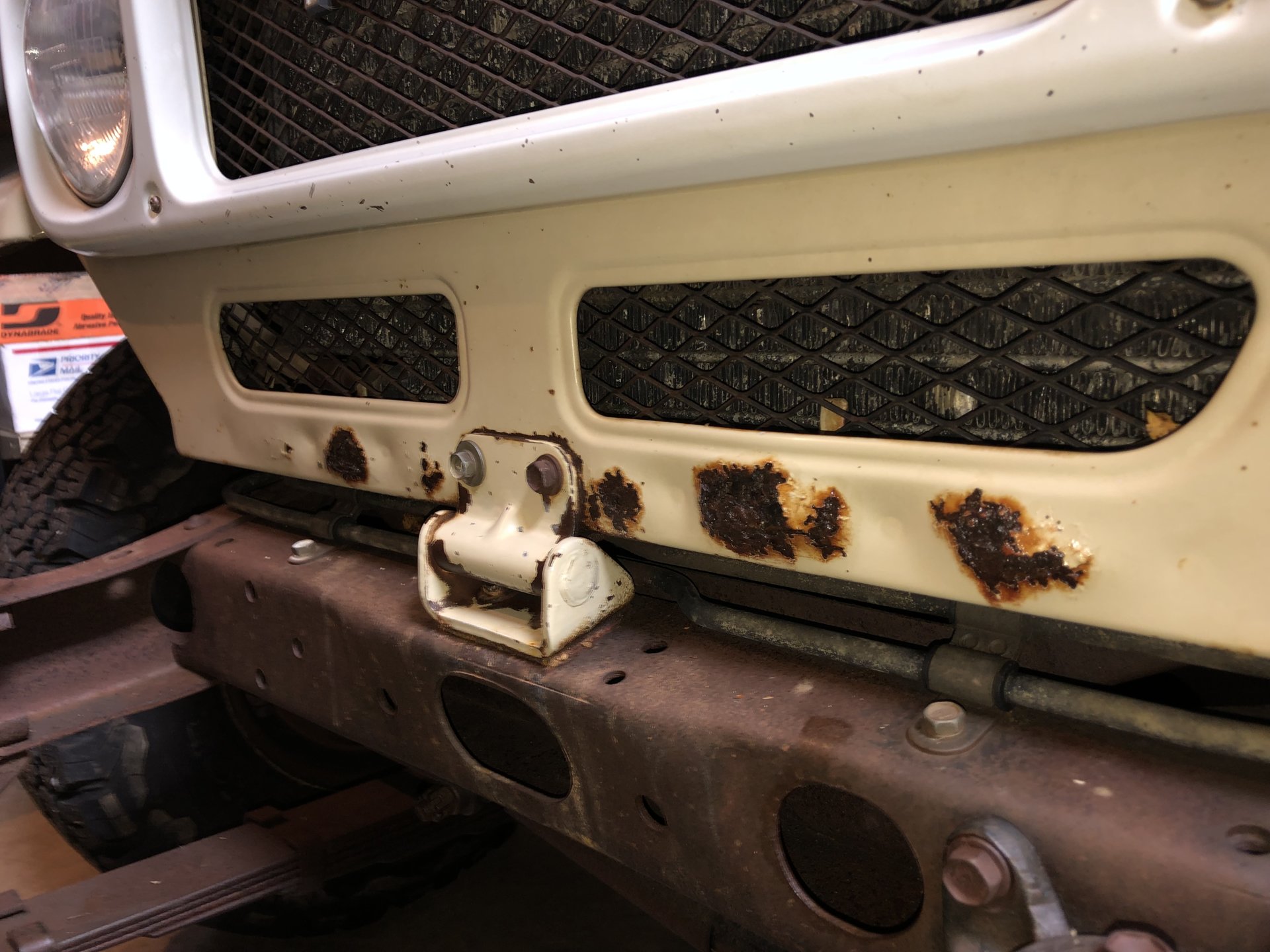 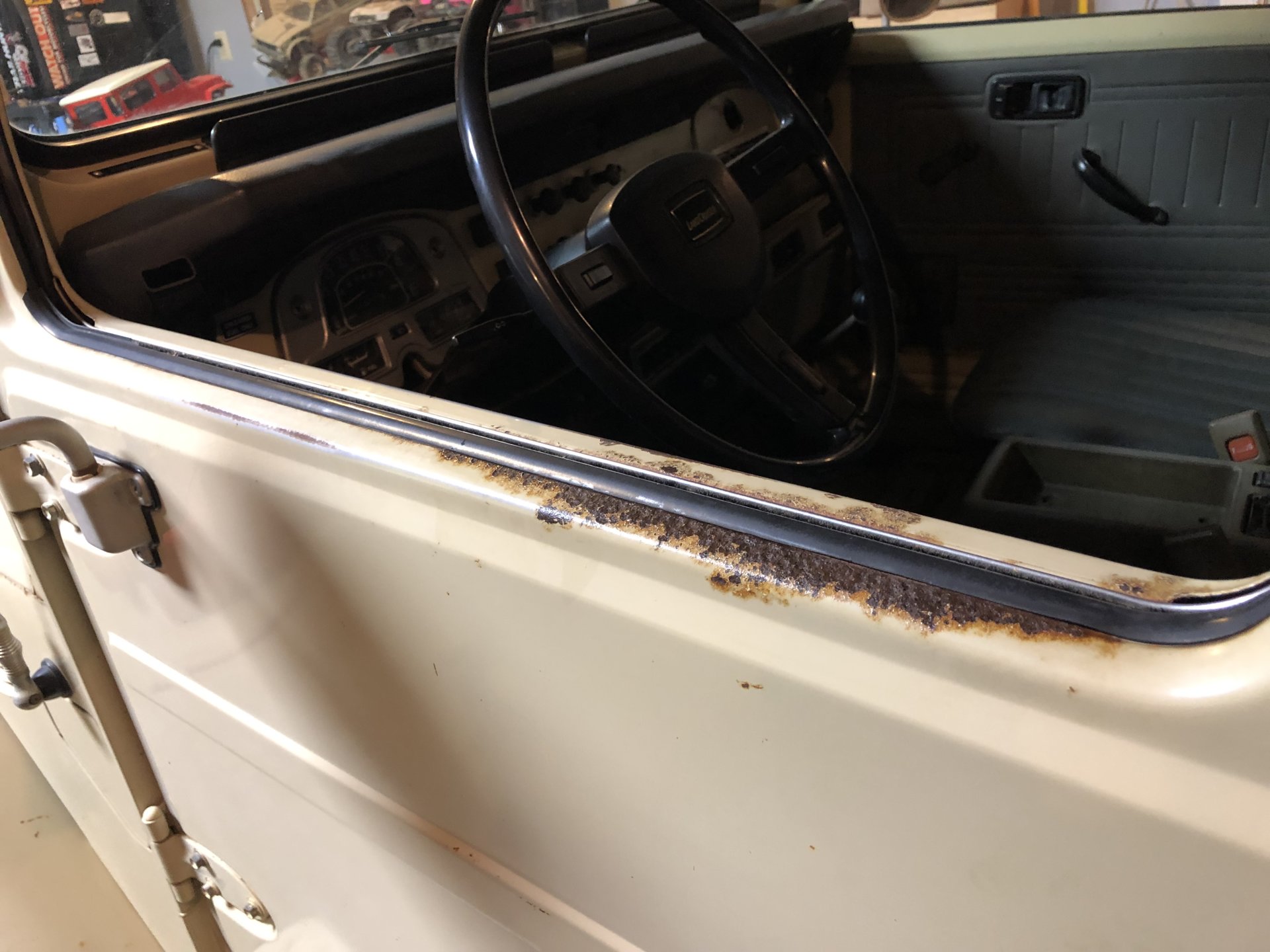 Dusty will crank up and run. I can move it around the yard but the carb is gummed up from sitting for 15 years. I will need to rebuild it. That is high on my priority list. The truck has its factory jack and rods, tool bag (with most of the tools) and owners manuals. All the smog pieces are intact but I'm sure I will find issues with their operation. I haven't had time to dig into this truck mechanically, but I will. When I bring a new truck home I tend to focus on the cosmetics right out of the gate. It helps me to recognize the truck's potential and I appreciate the instant gratification of seeing a truck transform into something I'd actually like to drive around in. 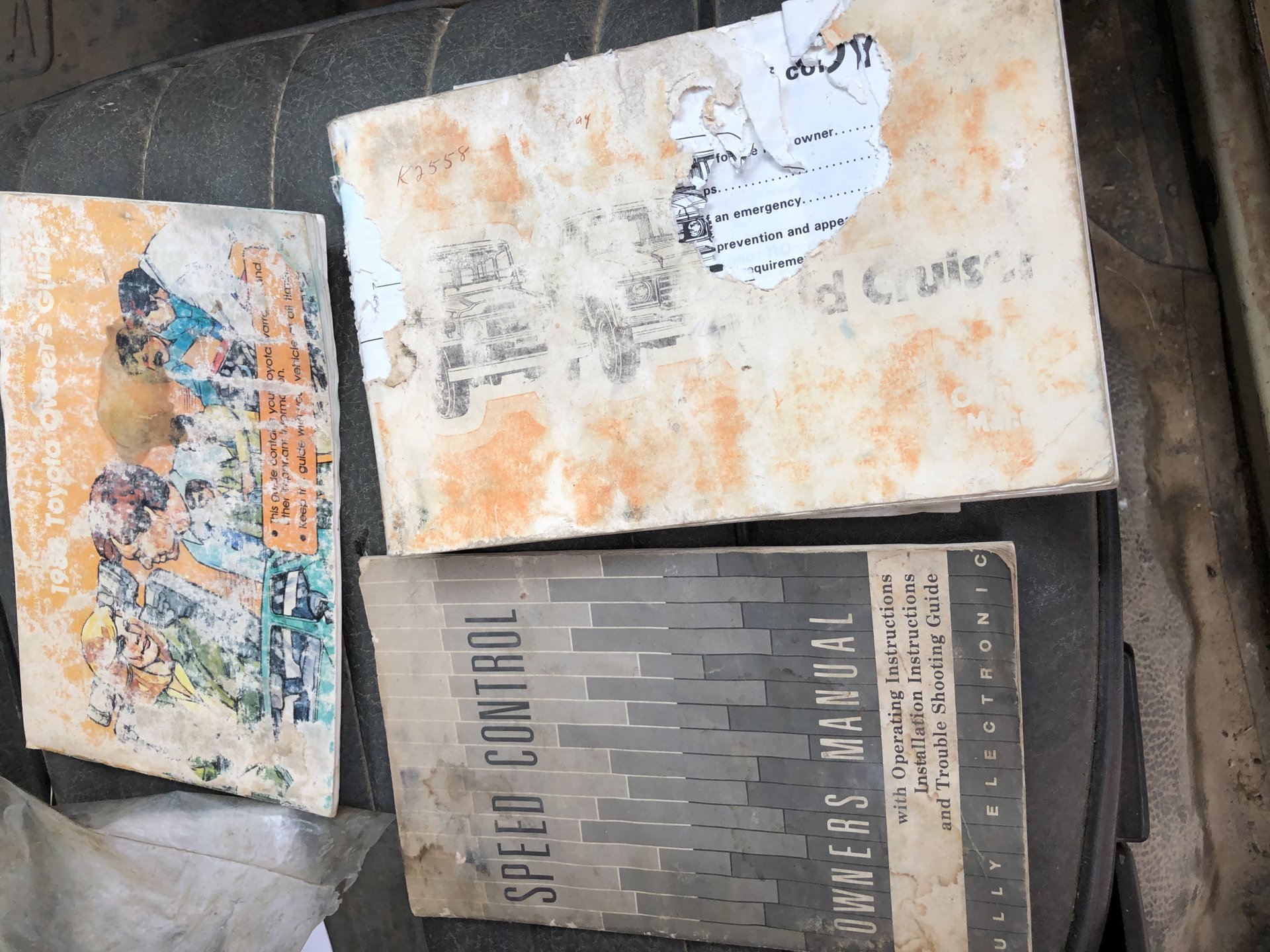 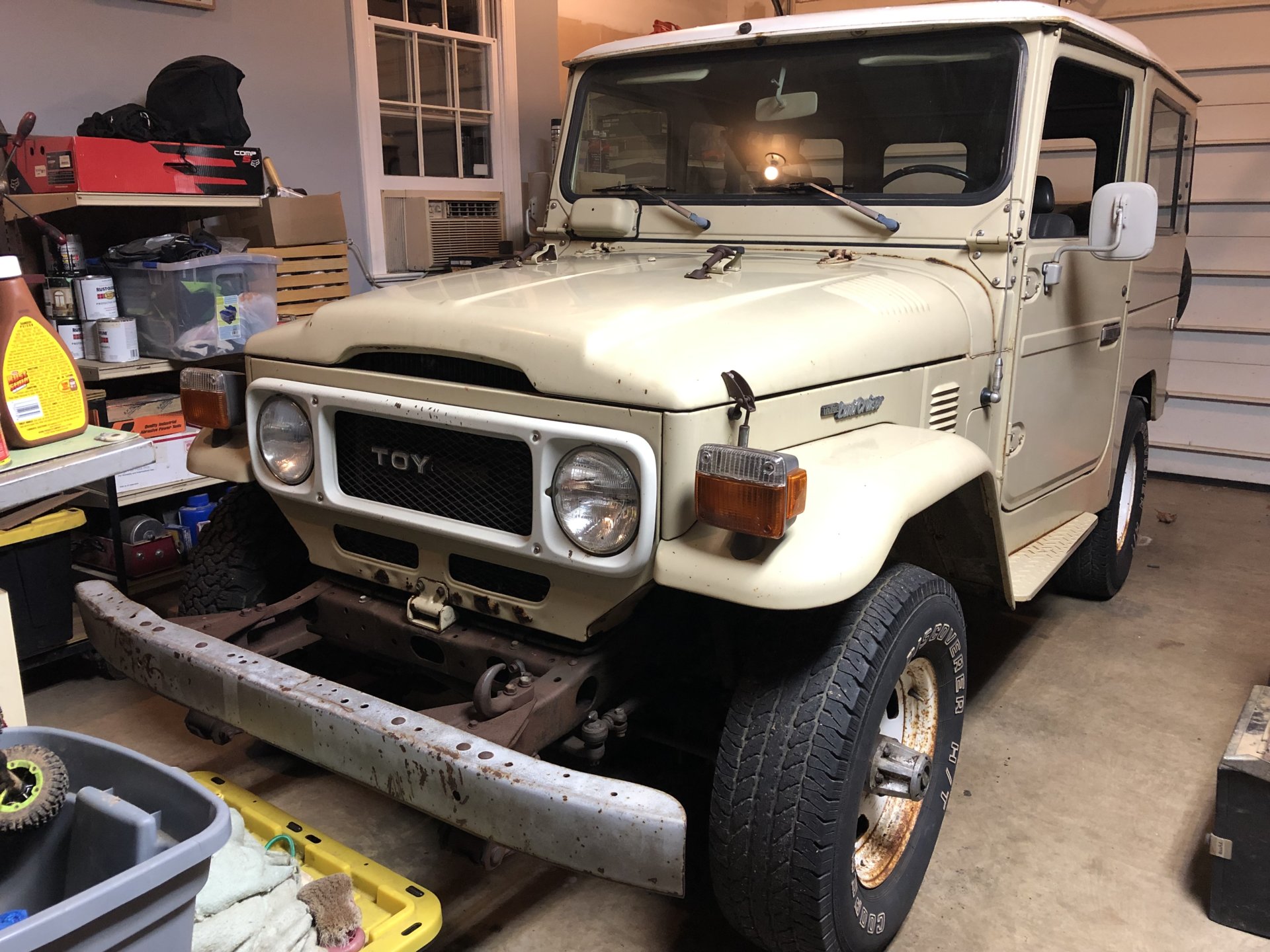 Time to update your signature!

Cool find Dave and neat backstory. How many miles does Dusty have?

I have the same rig just a month older. Mine also came with A/C but the first owner had it removed due to continual problems. My rig was purchased new in Phoenix AZ and has always lived in the desert SW.

firestopper said:
Cool find Dave and neat backstory. How many miles does Dusty have?

I have the same rig just a month older. Mine also came with A/C but the first owner had it removed due to continual problems. My rig was purchased new in Phoenix AZ and has always lived in the desert SW.

I am not going after the 60. I happen to think Mr. Cox wants a little too much for it. I am running out of space too. Dusty's odometer shows a tad over 14K. I know that that is not correct. The seller says he thinks it is around 60-70K. Honestly, I don't know. I may try to search carfax to see if there is any inspection history that would indicate when the odo was messed with.
DAVE RUSHING
TLCA #: 22571; ONSC MEMBER
Instagram: rushing.dave
'71 FJ55 "Bucky"; '94 FZJ80 "Cotton"; '84 FJ60 "The Turdle"

Thing a beauty! Right similar to one parked in my garage...
minus the nice PS/AC options!

Nice truck - Right in my neighborhood too!
1988 Toyota 4WD pickup
2007 FJ Cruiser
1978 Dodge W150 Macho Edition
"The problem with quotes from the internet is it is hard to verify their authenticity" Abraham Lincoln

dodored said:
Nice truck - Right in my neighborhood too!
Click to expand...

S.CarolinaFZJ80 said:
Great find! I can bring my 40 over so you can compare the factory AC setups once I get back.
Click to expand...

Is an FJ45 Radiator the same size as FJ40? See picture