Here is my install and write up on my new MT tube doors. I spent years waiting for someone to make them for the FJ... So, I jumped when production actually started by Metal Tech. 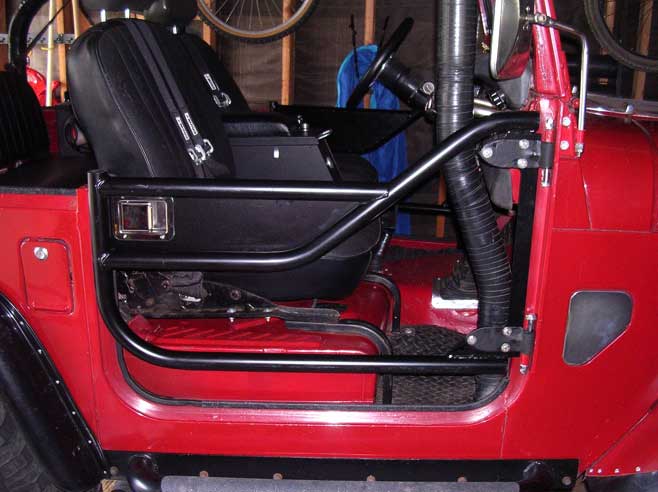 So, I originally had to track down some hinges to make these doors work as they require that you have your own actual hinges. In my case, I have only soft half doors that use the truck side half hinges (from factory soft-top setup), so I scored a set here off Mud out of Canada. I got the door side portion of the hinges all cleaned up (sanded, primed, painted) - but bailed on doing the truck side portion of the hinge (which you will read/see below) since I was able to make the half hinge work with a nut & bolt combo AND having changed truck side hinges once before, consider it a real PITA and figured if I could make my half hinges work, I would just do that until winter came and I had more time to prep and install the truck side hinges. Notice that rather than just using the pin for the hinges, I went to a 5/16" bolt system with a double nut AND an oversized washer on ONLY the half hinge side of each hinge. This way, the bolt stays centered in the half hinge portion. I also went this route, with a double nut, to make them a bit more secure from someone jackin my doors. Seems pretty solid setup and because of that, I will roll with the door side half hinge as I had hoped. Have not seen anyone else making a half hinge work like this 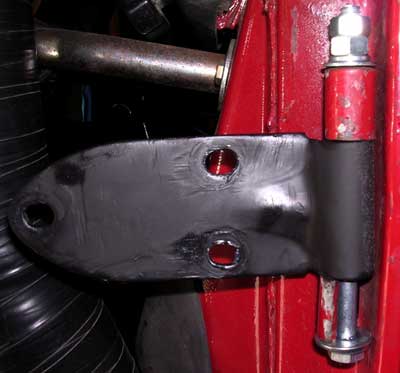 In my case, I bolted up the hinges all around in preparation for the doors. When I got the doors, I installed in this method:

1. bolt door to my hinges - mock up style, not worrying about precision yet
2. bolt in the paddle
3. bolt on the striker
4. screw in the black ball handle

Once that was all mocked up and installed, I got down to actually setting up each door. In the end, it was not as time consuming as I had expected - maybe 30 minutes per door. It does take some tweaking as you can tweak the doors on your hinges (as the bolt hole on the tube doors are slotted), the paddle handle location fore and aft, and the striker plate. You will need to do all of this given YOUR tub and tweaks your rig had. In my case, my drivers side has a peculiar issue my passenger does not. I setup my drivers side such that the door was all the way forward (toward engine) and at it's highest position in the hinges, and the paddle was set as far forward (toward engine) as possible. And, the striker plate was as low as possible on the pillar and pushed as far in (towards seats) as possible. This was because (see below photos), the latch actually sits super low on the striker plate despite the door at it's highest position on the hinge & striker set low still the latch hits the bolt head of the striker plate. What this means is that the door is latched shut, but since the latch hits the bolt head, the paddle is not fully retracted so it flaps in the wind a bit. This is not the case on the passenger side. And, I set both up exactly the same. That just shows the difference in 1 rig from side to side. I may need to get like a hex head bolt with smaller profile for that lower drivers side striker plate bolt so I can get maybe a cm more clearance so latch and paddle can retract fully. 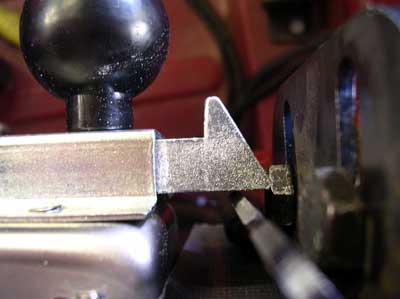 In the end I also used some weather stripping foam on the outside of the pillar where the door strikes to keep any sort of rattling to a minimum as the striker plate - even on its most pushed in location as noted above - still has a little gap between the latch and the striker plate. But, it works just fine this way. I also had some round plastic caps (from what I do not know) that just happened to fit that open tubing on the door that faces up at the pillar - so now it is closed off so no water & debris will get in and it just looks cleaner and more finished with these in place.

I am super happy with the doors. They seem VERY solid and the design is growing on me. I certainly felt more secure rolling this weekend with these doors in place. I had to patch a little hole in the weld on one, but quality seems super nice. 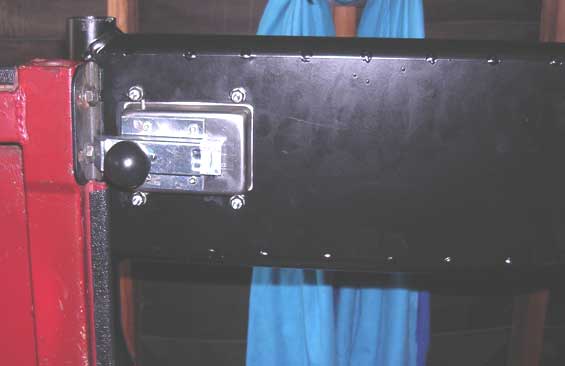 BTW, ever have one of those orders where from moment 1, everything went south? Shipping delays (thanks DHL), missing product, defective product, etc.... I oddly had it all in this 1 order. BUT, Mark was very helpful, super cool, and rectified the issues with LT ASAP - so it all worked out in the end. I got to installing and rolling this past weekend. And, they are pretty sweet. Rolled with them all weekend...
SoCal FJ - 1974 FJ40 | Trail Photos | Parts Wanted & 4Sale
My FJ is better than your honor student


yes, as mentioned by calstyl2, they sit a bit outboard. approx width of the tubing.

top down of the plug I put in..... and a wee bit of foam weather stripping 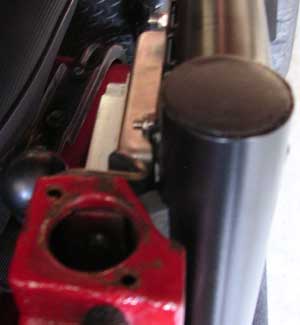 like the foam, thats a issue I need to deal with, what did you use for a plug?

man, I do not even know what those plugs are from to be honest. they were in my junk box and I just remembered them when installing the doors and they happen to fit. I was thinking that you can find stuff like those at Home Depot... mine could have been off a vacuum for all I remember.
SoCal FJ - 1974 FJ40 | Trail Photos | Parts Wanted & 4Sale
My FJ is better than your honor student

also try ace hardware for those caps, they gottem

they look nice - - what cost do you have in them?
You must log in or register to reply here.

Bracket at top of rear doors?

Are these Ambulance Doors restorable?