Got with a bodyshop this week for a couple estimates. They said for a complete doors off, windows out respray will be "every bit of $12k if not more". The paint they use carries a lifetime warranty and I plan on keeping the truck for at least that long so I'll bite the bullet. While I get some other things payed off and start putting away money for that I'm going to have them weld up the three holes in the trunk floor, the two drain holes on the tops of the rear wheel wells and coat the wheel wells to prevent rust. Want this done to give my LC and better chance of surviving until I can get the respray done.

In the interest of getting more info out there for others to compare prices, I was quoted $546.85 to weld up the five holes in my trunk. Four of them are about dime sized and the fifth is almost the size of a nickel. I'll upload a photo later. The shop told me if I can strip the factory sound deadener myself before coming in that it could help us both out and probably save me some money. This price includes doing all of the prep, welding and sealing afterwards from the underside. For an extra $137 they'll coat the wheel wells. Going to get all of this done, the wheel well coating especially, I want to keep what's nice in the shape that it's in.

I'm also going to have the shop repair/repaint the dash I got from the donor fj62.

Been a busy holiday season so far so progress has slowed down on the cruiser. The back window was the last one to get its tint removed. Unfortunately the previous owner double tinted the window and it wasn't coming off even with the steamer. Ended up dragging a razor blade across the entire window and shredding the defroster lines. I've looked into a couple solutions and I believe I can fix it, if not, I'll just get another OEM window from a different cruiser.

While the rear window was out I repaired some body rust that had developed under the window seal. 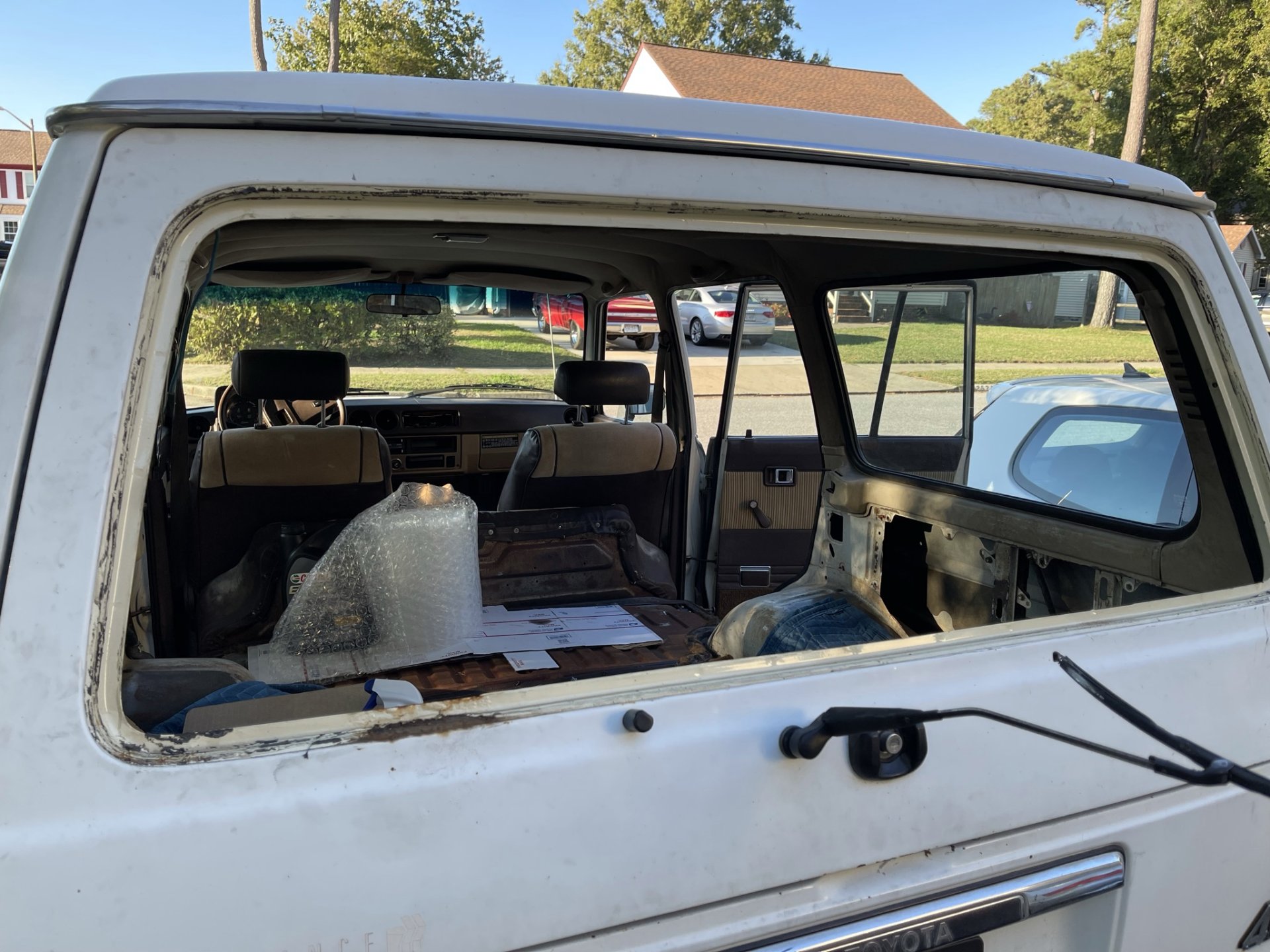 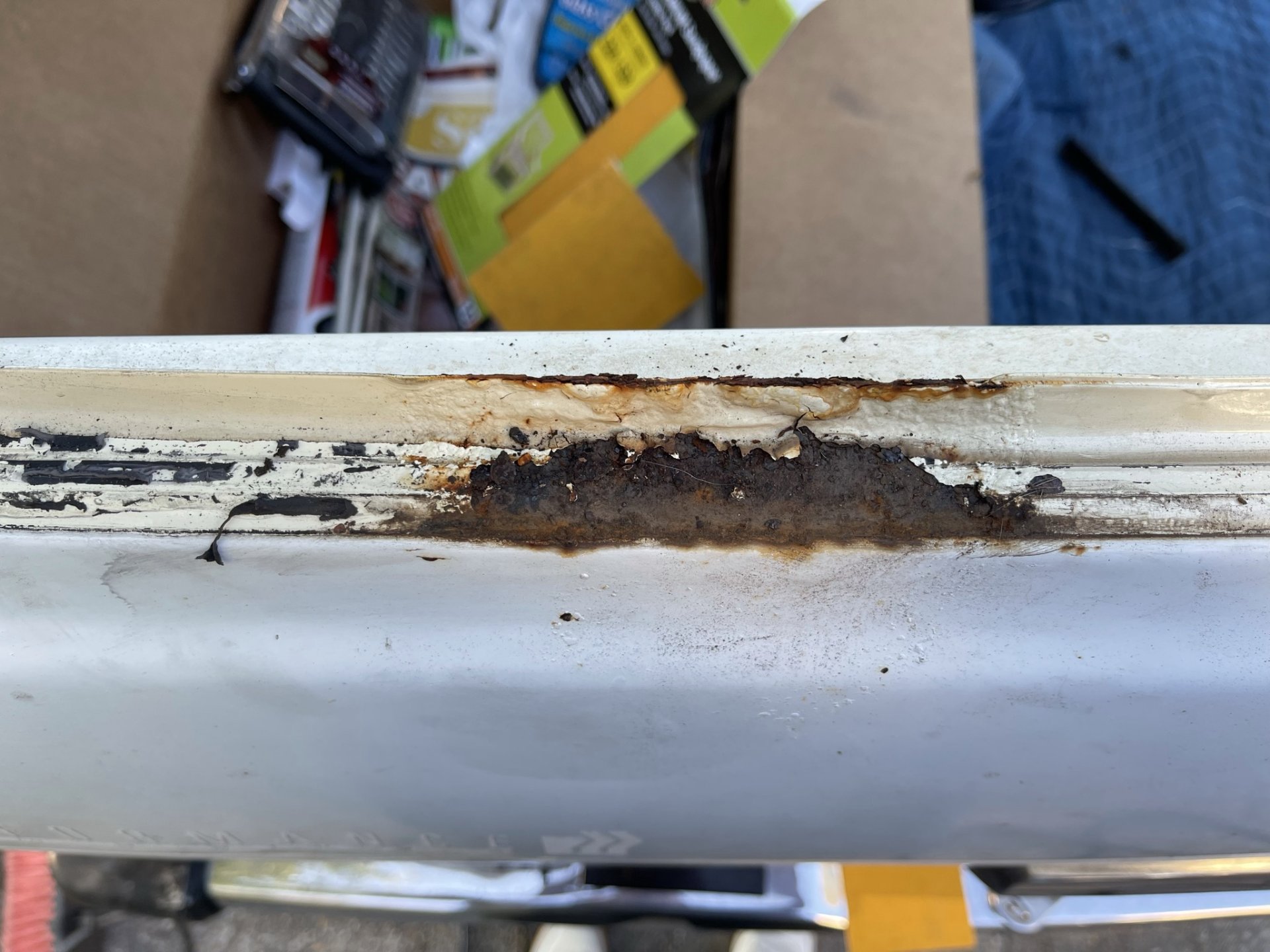 This area was wet when I removed the original seal, glad I addressed it before it got worse. This is the only real body rust right now and I'm trying to keep it that way. Sanded it down and painted over it to hold me over until I can get a full respray.

I also finally got that body shop quote I mentioned earlier. They're going to weld shut all of the holes in the trunk that the previous owner drilled, the two holes in the tops of the wheel wells as well as coat all four wheel wells so they stay rust free. To speed up the work and hopefully lower the cost I removed all of the OEM sound deadening in the trunk with some dry ice. A five pound block was more than enough to do this area and I'll need more when I get around to doing the rest of the car. 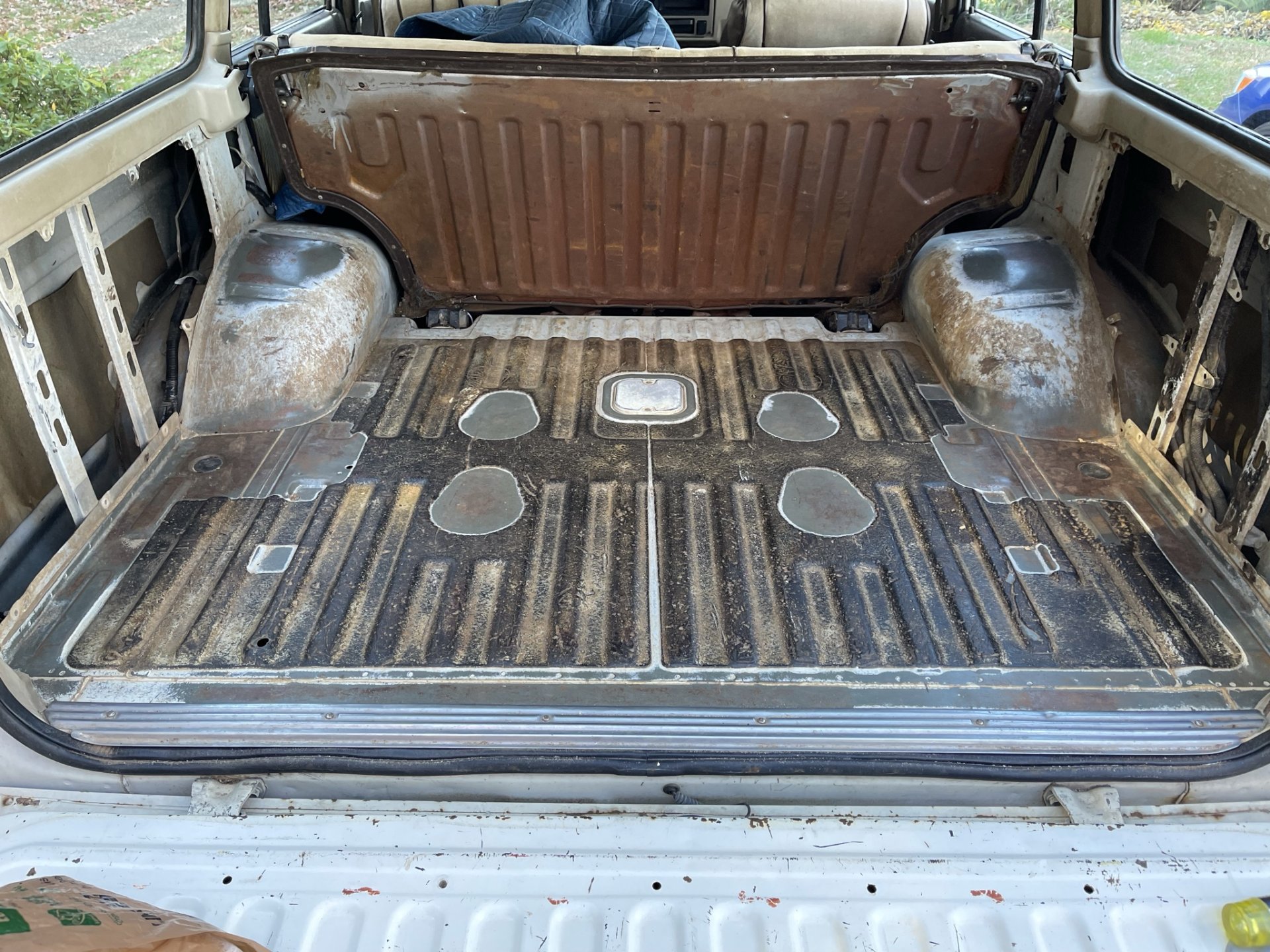 After one side was done. 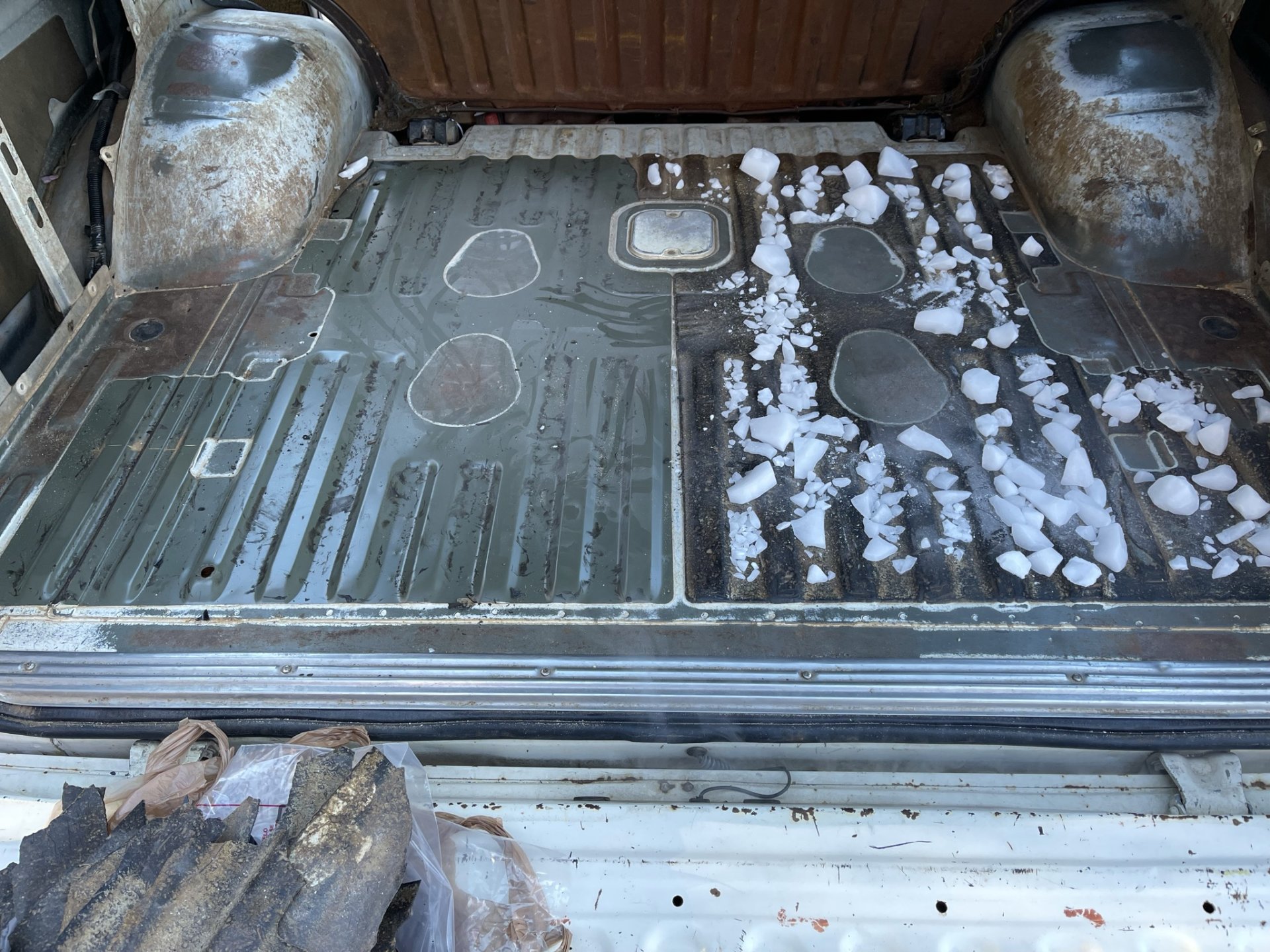 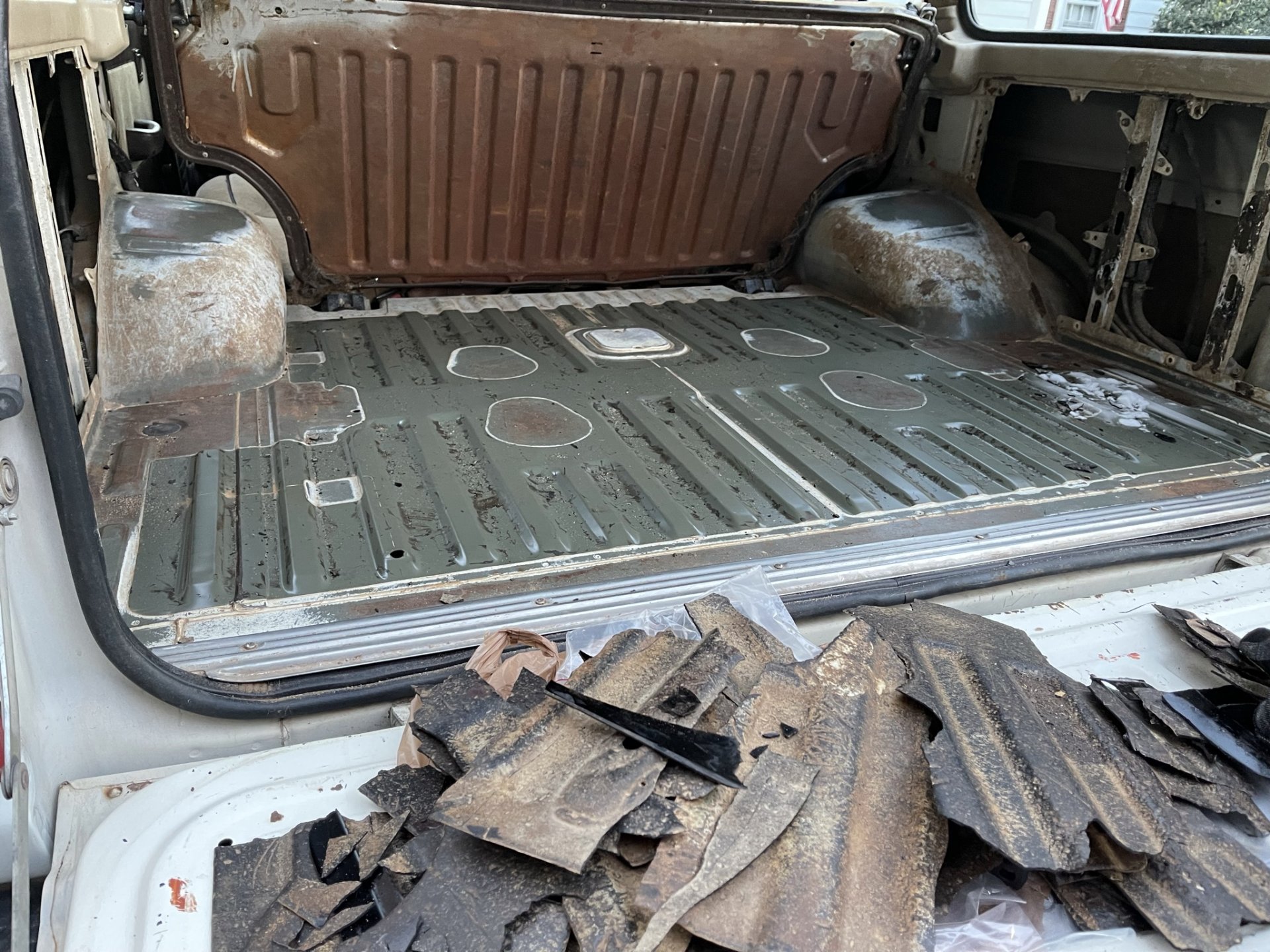 For anyone doing this later, the smaller you can make the dry ice pieces, the better. Let them sit for about 15 minutes and then start hitting it with a mallet. Next steps are to order some sound deadening material to cover this back up once I get it back and then the carpet kit from another user on the forum. I was quoted $12k for a doors/trim off respray in the factory 033 Toyota white and that comes with a lifetime guarantee on the paint. For now the paint and body are solid so I think I'll work on getting the interior how I want it and addressing any mechanical issues that come up along the way. My passenger side reverse light is out for some reason so I've got that short I've got to chase down but nothing else that's pressing. I've got a pretty good roadmap of what I want to do and how to do it, just a matter of getting it all done.

@TheEngineer I've been interested in the Frost Fighter kit - my PO put stickers all over the inside of the rear window and removing them peeled up the defrost lines [insert eye roll here]. If you go that route I'd love to see how it turns out.

CruiserTrash said:
@TheEngineer I've been interested in the Frost Fighter kit - my PO put stickers all over the inside of the rear window and removing them peeled up the defrost lines [insert eye roll here]. If you go that route I'd love to see how it turns out.
Click to expand...


That's the same one I was looking at. I'll eventually get it but with how warm this Virginia weather has been lately I'm not in a rush. Their kit looks like it uses our style connectors which is a bonus.

Tracked down an high pitched whine to my transmission. It sounds like the throw-out bearing is resting on the clutch springs. For the past couple weeks I've heard a creaking when I push the clutch pedal in and thought nothing of it since I didn't notice any performance changes. Hoping it is just an new slave cylinder that will fix it so I've got one ordered that should be here in a few days. 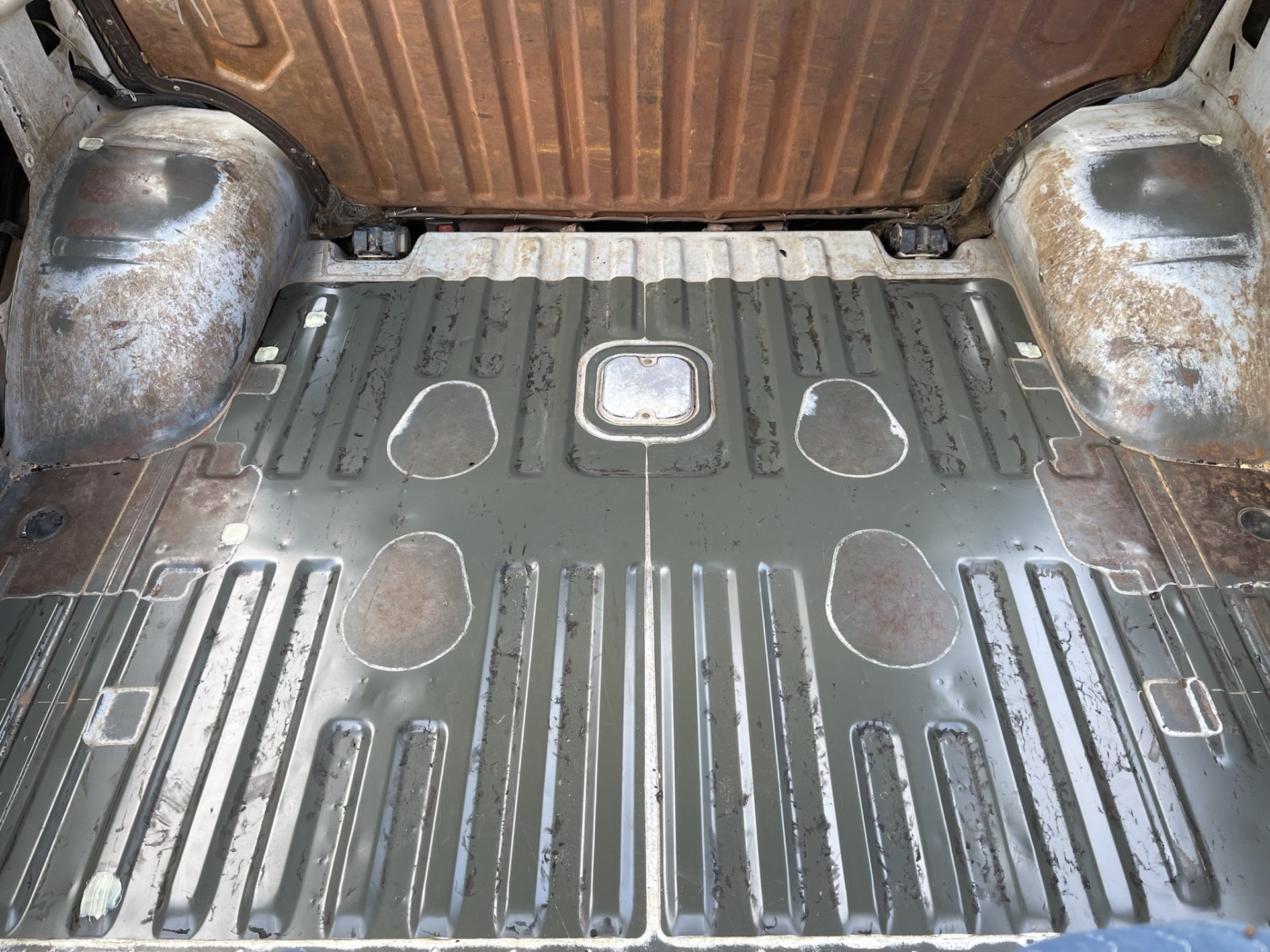 Got all of the holes patched in the rear. Body shop put some white sealant over the tops. 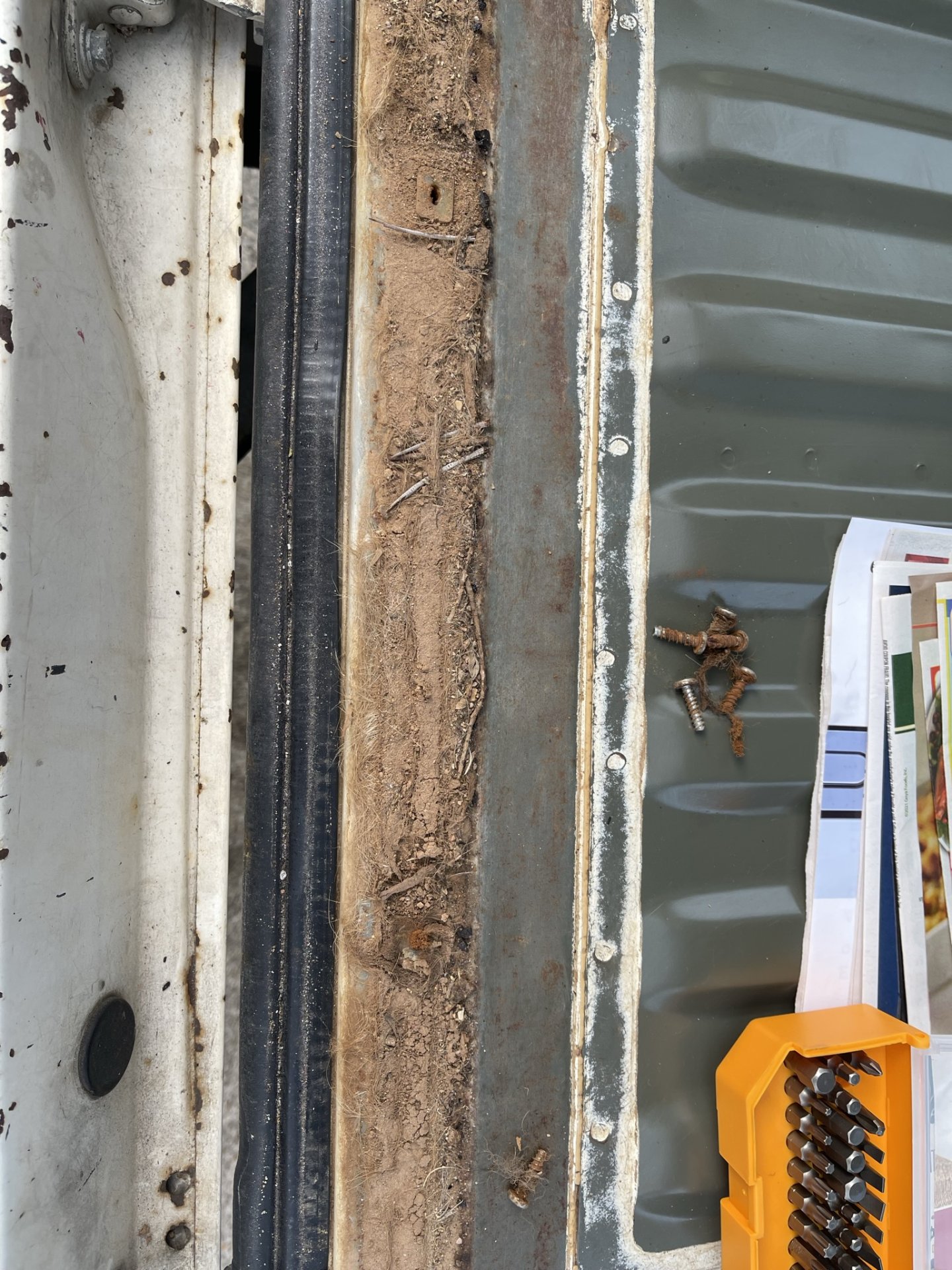 To give an idea of what I'm cleaning up while I do all of this. It's dry clay and way too much dog hair. Need to make sure all of this is gone before I put down the sound deadener. The spaces on either side of the trunk floor where the water bladder and gas tank fill neck sit are both filled with the dirt/fur. I've pulled out fistfuls and there's still more. 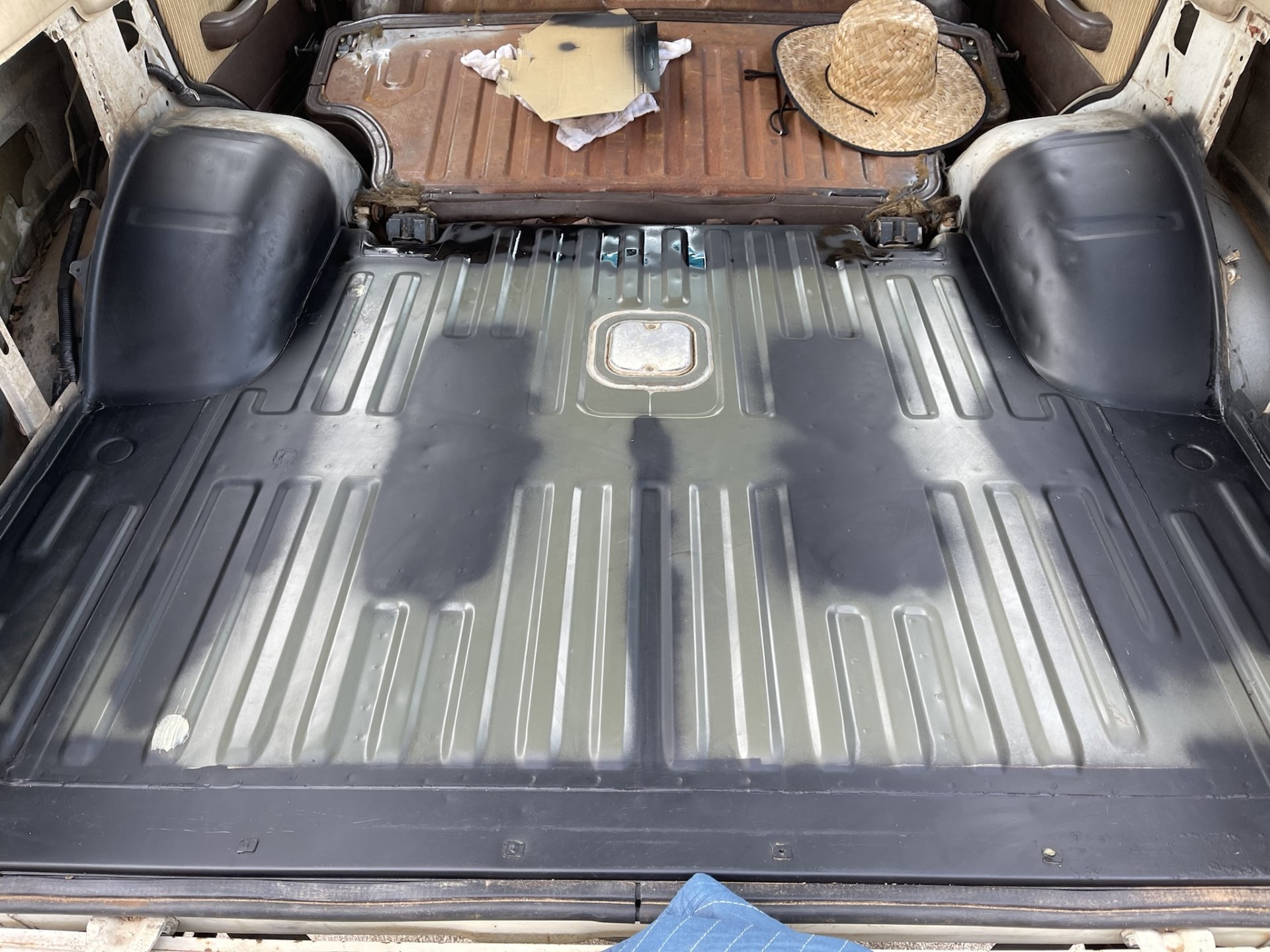 Goo-gone and rust converter spray prep in the rear. Some of it was surface rust, the rest of it was caked on dirt that came off with a ton of elbow grease. 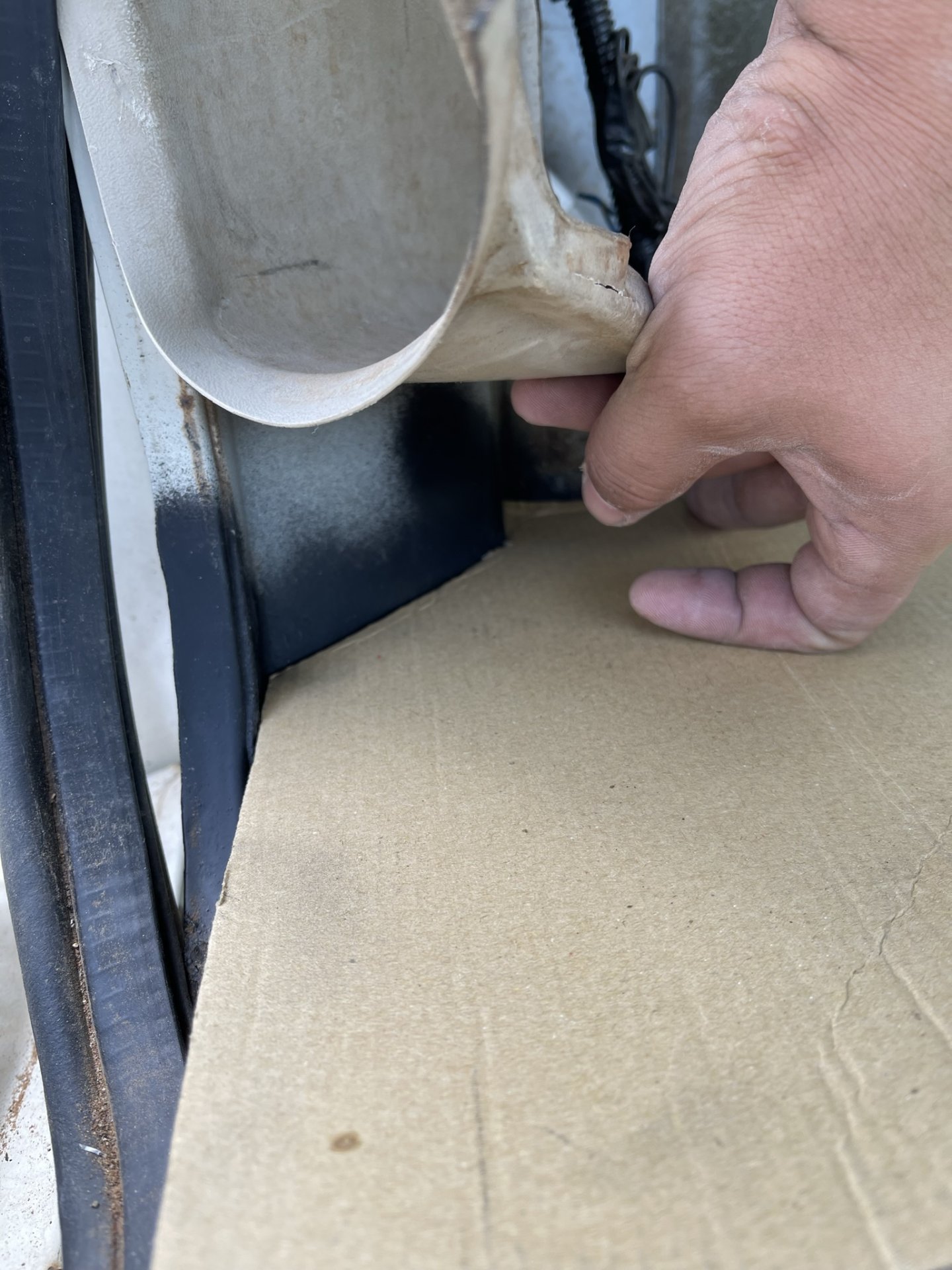 Basic CAD work to make sure my patches fit nice and snug. 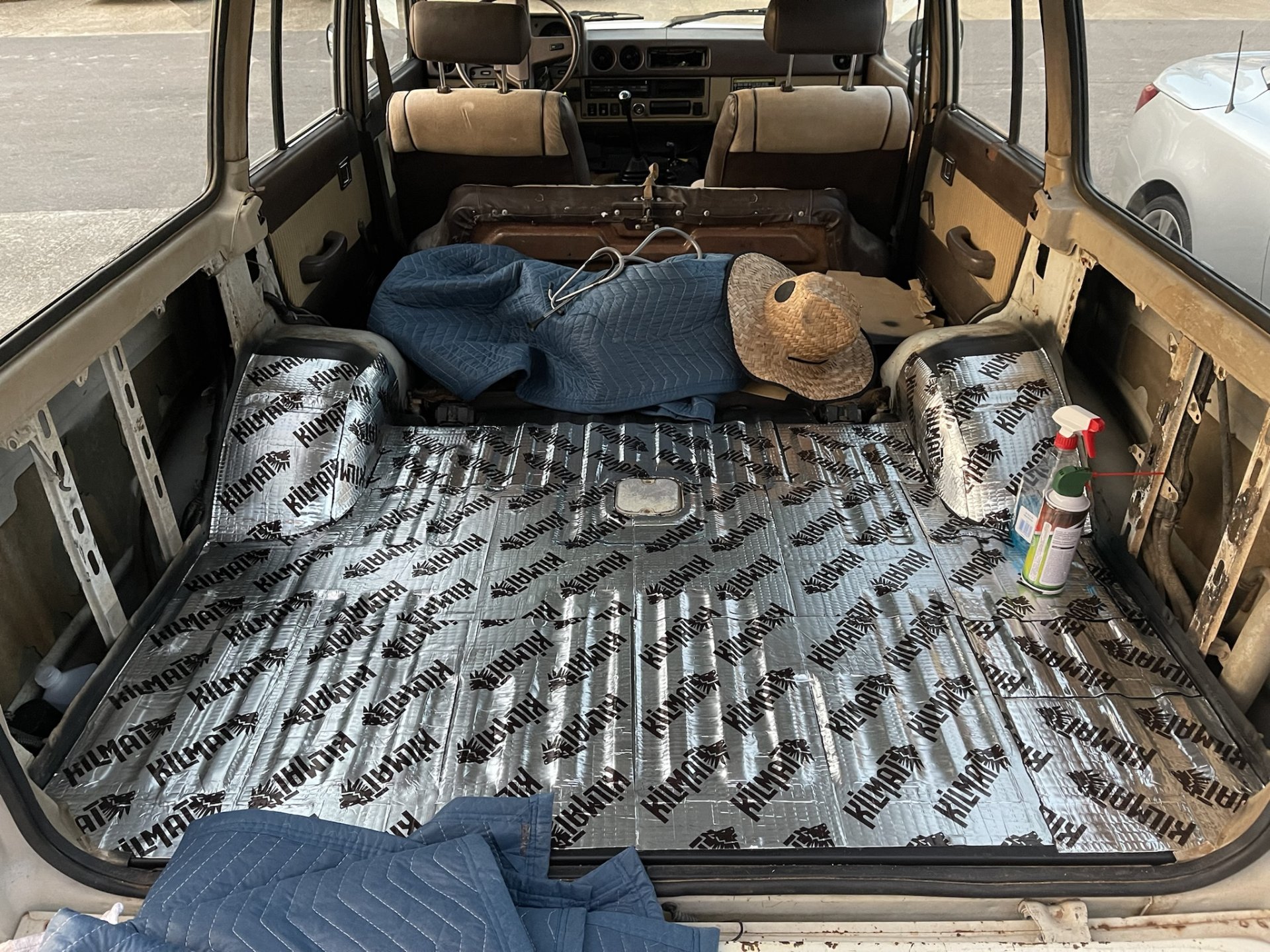 Made use of the mid 60's/70 degree weather we've had. Got the trunk floor done in a couple of hours and I still need to do the rear quarter walls to consider this part done. If anyone knows a way to get the stock sound deadening off the quarters I'd love to hear it. Some of it is still on there nicely, other patches are barely holding on and its kind of a pain to scrape it off in tiny chunks.

Going to vacuum out the sides and cover what I can in rust reformer just to be safe. Once that's done I'll have to put mat down there too.

Decided to change my spark plugs since it's too cold to do sound deadening work. I probably won't be able to do the rest of it until mid-march because of outdoor temps. Engine runs much smoother and quieter now.

Since progress has grinded to a halt on the interior work due to weather I'll write out my plans so far.