I got my truck in late 2004 in Arizona - during Christmas break that year, we installed disk brakes in the front and putzed around the desert a bit (see pic with the two oldest nephews, and the pic from the same day that got me into Henry Brimmer's LandCruiser calendar 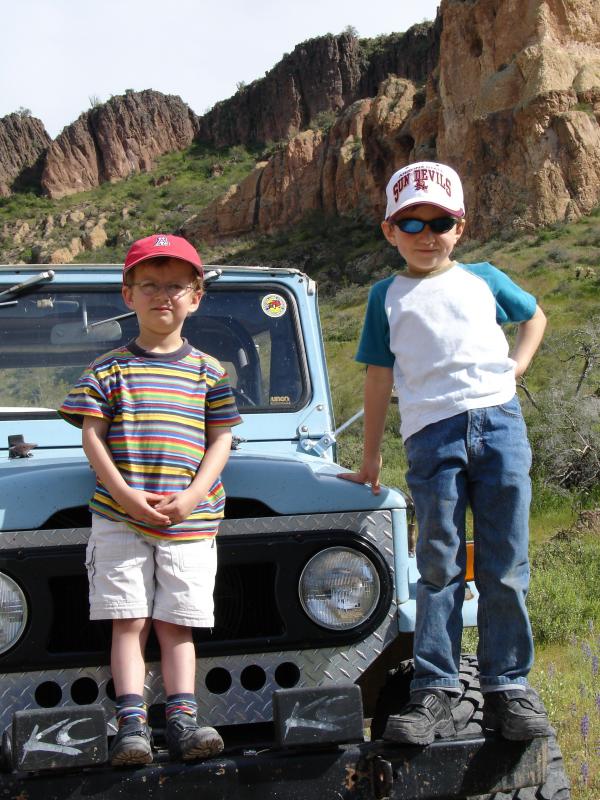 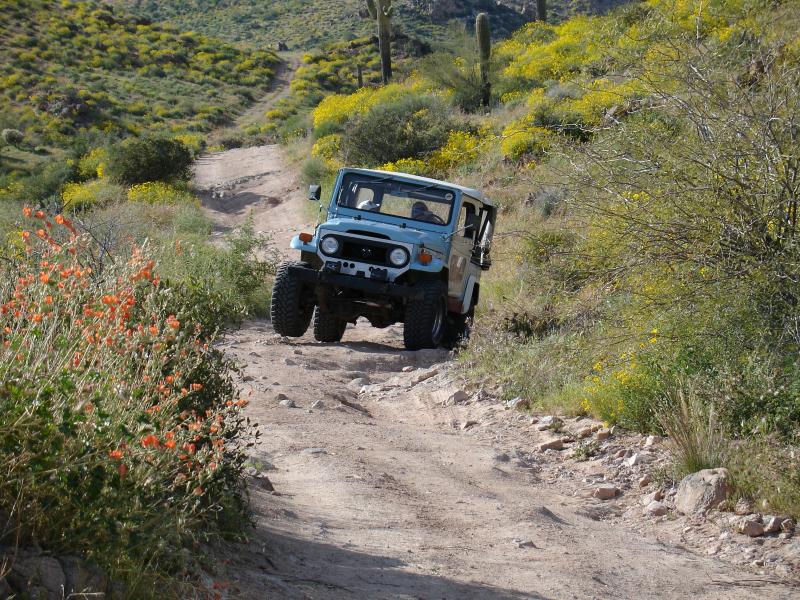 attended Easter Jeep Safari 2005 on the way - wheeled my first-ever Moab trail, Poison Spider, in rain turning to sleet and finally to snow - seriously, first time out there, in a manual truck with manual steering, following Blazers . . . "hey guys, the weather is getting worse, you really think I can make it out of here ?" "sure, you'll be fine" - 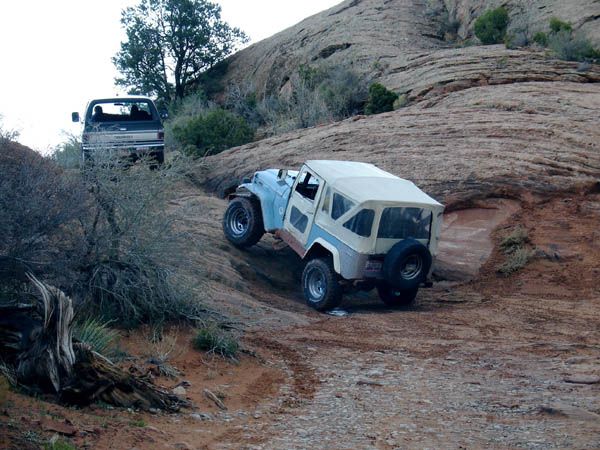 proof of the snow, and we did Metal Masher the next day

from Moab, the truck got loaded onto an 18-wheeler on which friends from Omaha had brought their trucks to Moab, having left a spot open for my 40 for the ride back

over the summer of 2005, we went through the truck, removing the shagadelic deep pile carpet and hacked up wiring, putting in a more comfortable seat for me and making it a reliable wheeler 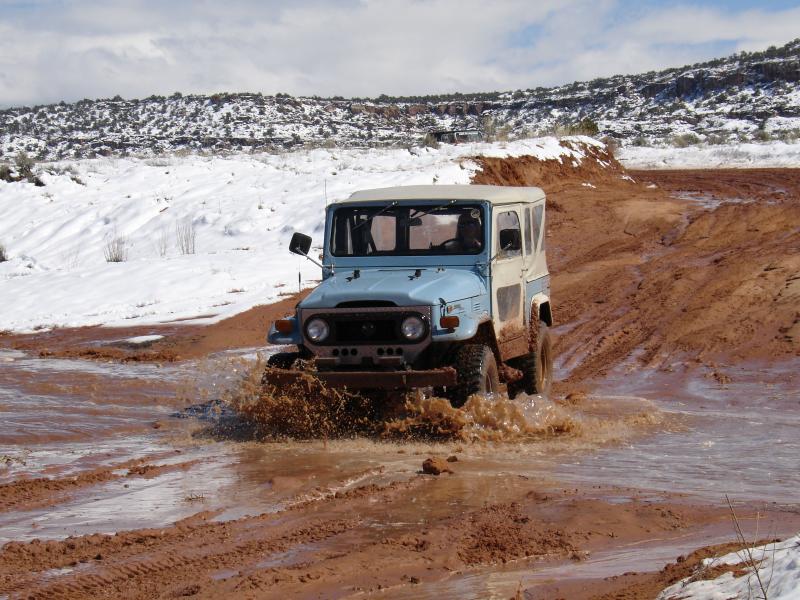 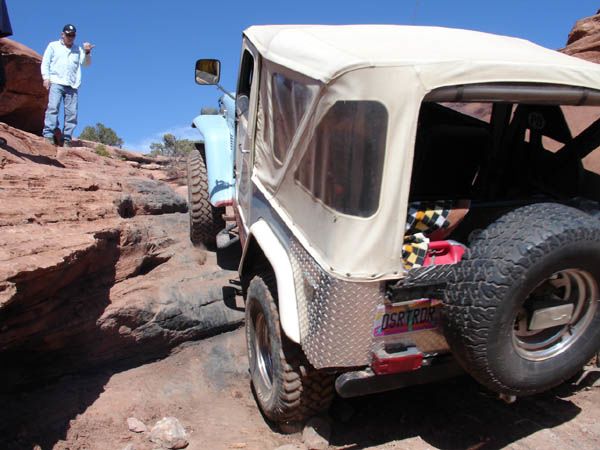 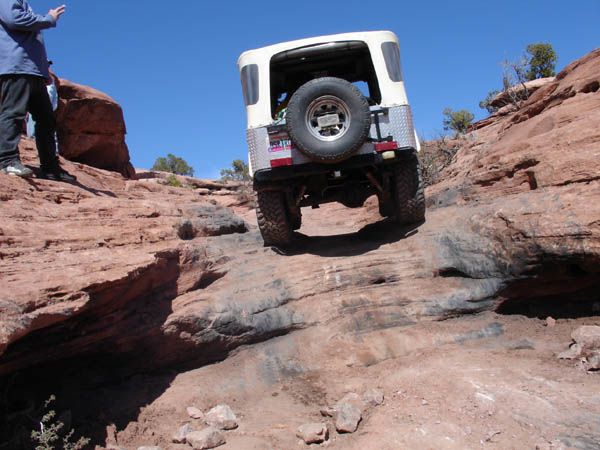 and we drove both trucks back to Arizona in the fall of 2005 - ChaseTruck in the Blazer and I drove the 40 (some good stories involved, to be told another time) - attended Blazer Bash '05 in Moab - got me into a 4x4 magazine

- and then onto Arizona, where the truck has lived ever since 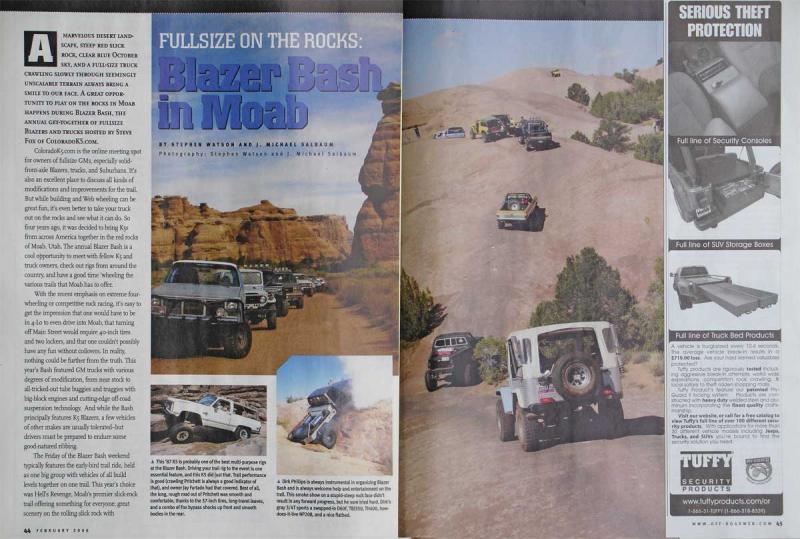 fast forward past many wheeling outings over the years

and plenty a quality mangleage mostly of frame and suspension - when I get to it, I'll put links in here

https://forum.ih8mud.com/az-copper-...putable-shop-do-frame-repair-east-valley.html talk about leaving your truck with someone you just met once before

. . . to yesterday, when the truck entered the "LandCruiser Spa and Emporium" for much deserved and much needed love and care - links to their other 40 projects will appear here soon

two pics for reference - recent action in the wild 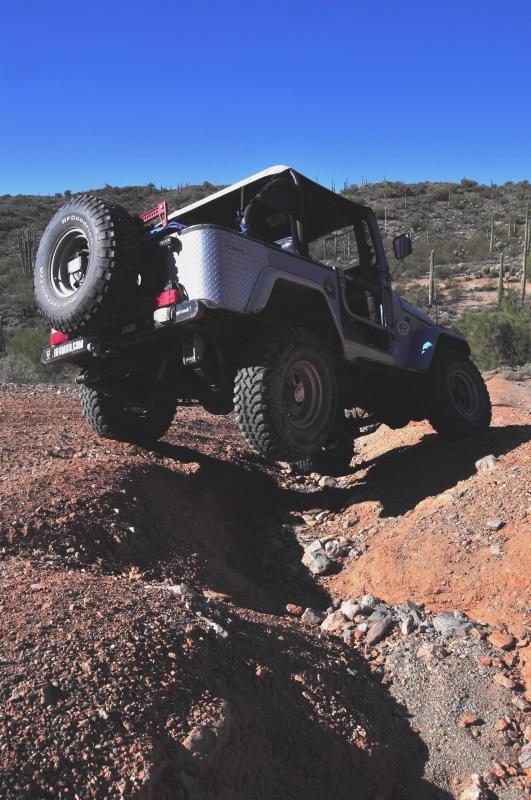 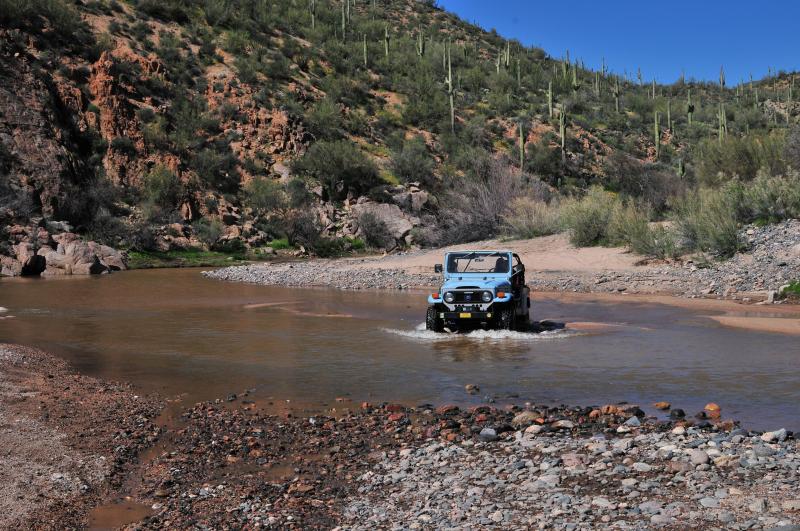 since then, I have sold off the rear ConFer bench (since there's never been a rear passenger in my time with this truck

and the front bumper (acquired after a rock jumped at me - now affectionately named Claudia's rock link to the story https://forum.ih8mud.com/40-55-series-tech/127110-oem-bumper-no-match.html) - was supposed to accommodate the hand-me-down winch from ChaseTruck that never materialized in the 6-and-some years since

(talk about a husband saving money

) - it's a 4+ Dave Gore bumper (http://www.4plusproducts.com/home.html) distinguished by a unique sticker (first pic)

but now I got one better - still a 4+ bumper (not that there is anything wrong with them, quite to the contrary 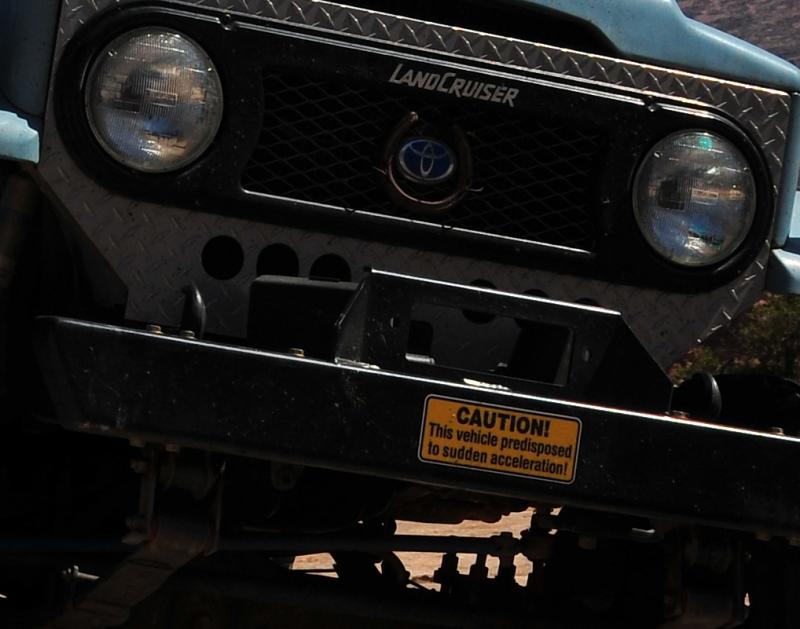 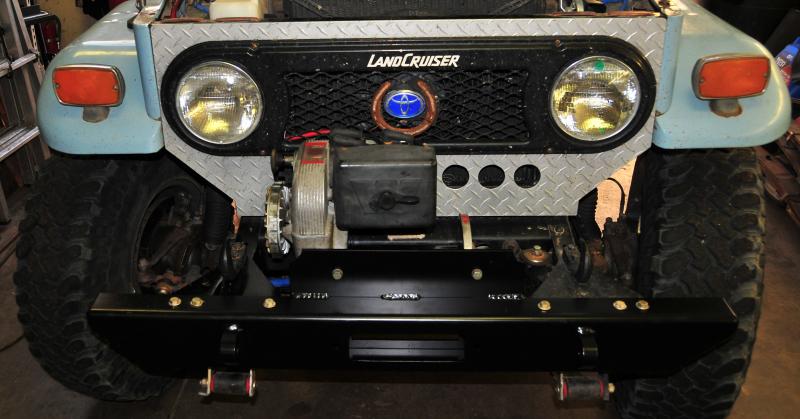 so, after this lengthy introduction . . . (I feel it was justified since I never posted about the first -mild- refurbishment in 2005; and haven't had a build thread, either - so this is it 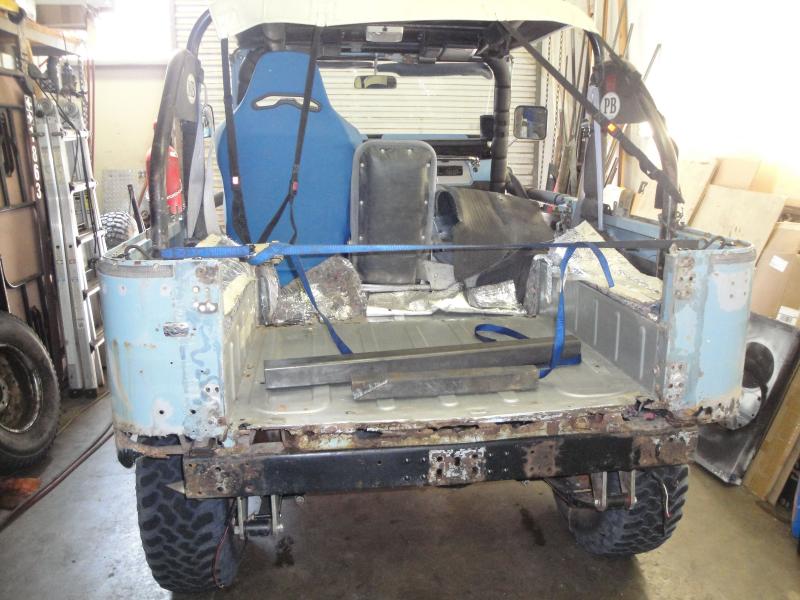 as you may remember, there was diamond plate there - which we, after reading horror stories on MUD in the summer of 2005, simply decided to ignore

- and this was under it

not too bad after all

seems that the some POs ago wheeler got the quarter panels dented (not too bad, actually) and felt like they needed covering up

and, as you can see, there was no sill left whatsoever

yeah, we kinda surmised as much in that summer of 2005 and just caulked/siliconed the gaps 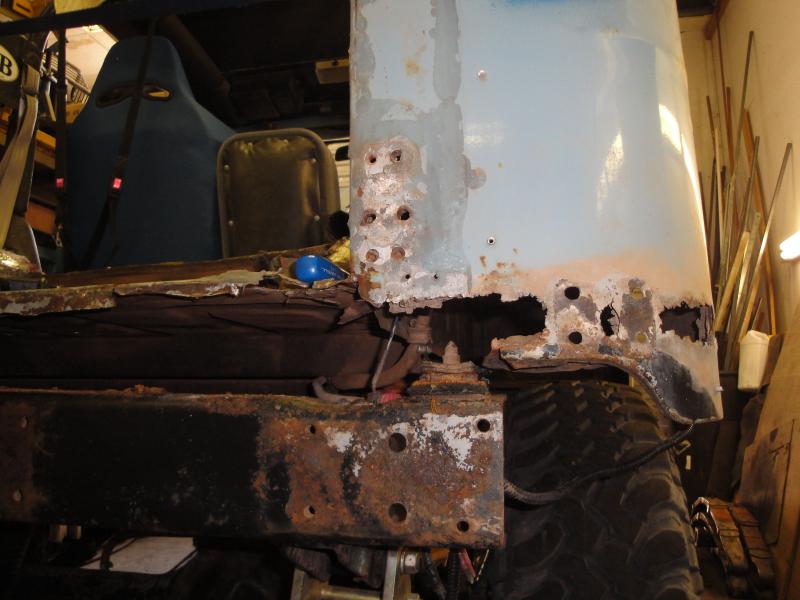 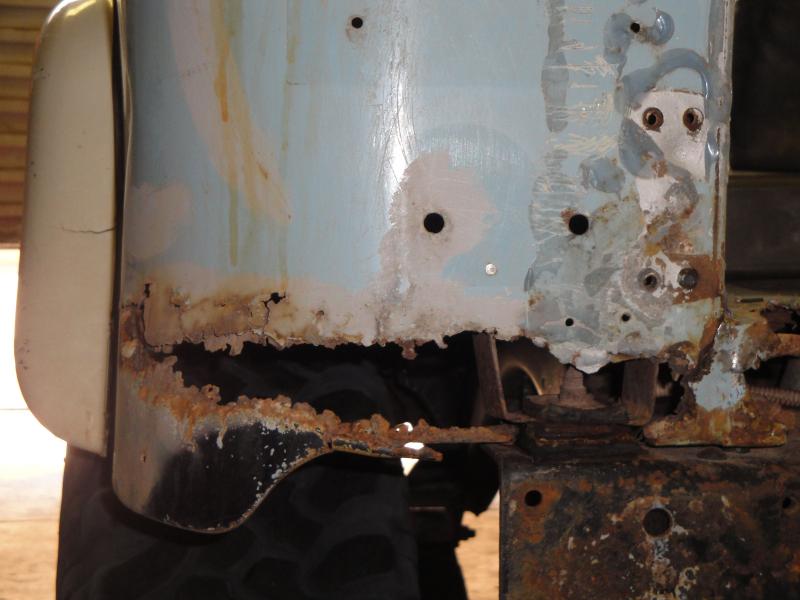 a little bit later in the afternoon today:

story is (yeah, there's always a story around my truck, but hey, the interwebs is all about entertainment

): we went to the metal place, and -sure enough- they had every other dimension and thickness but 3x3 in 3/16th - so we went with with 1/4th 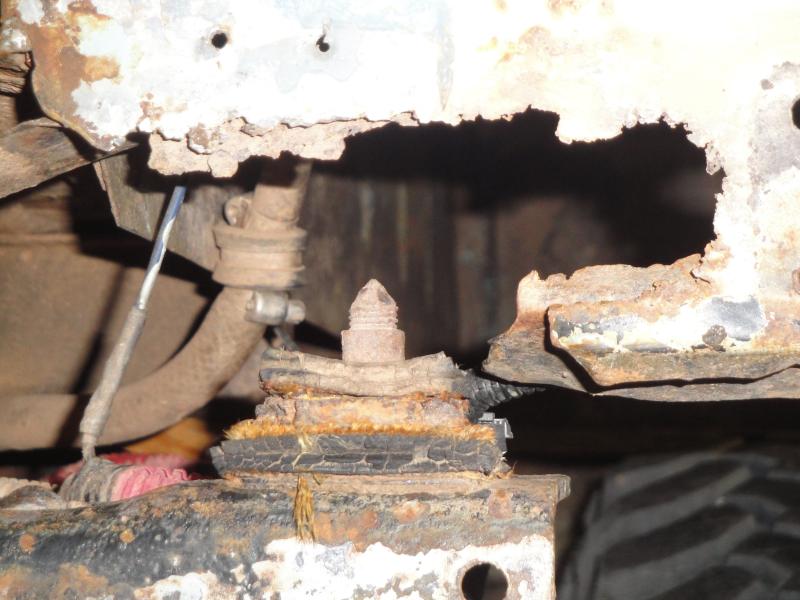 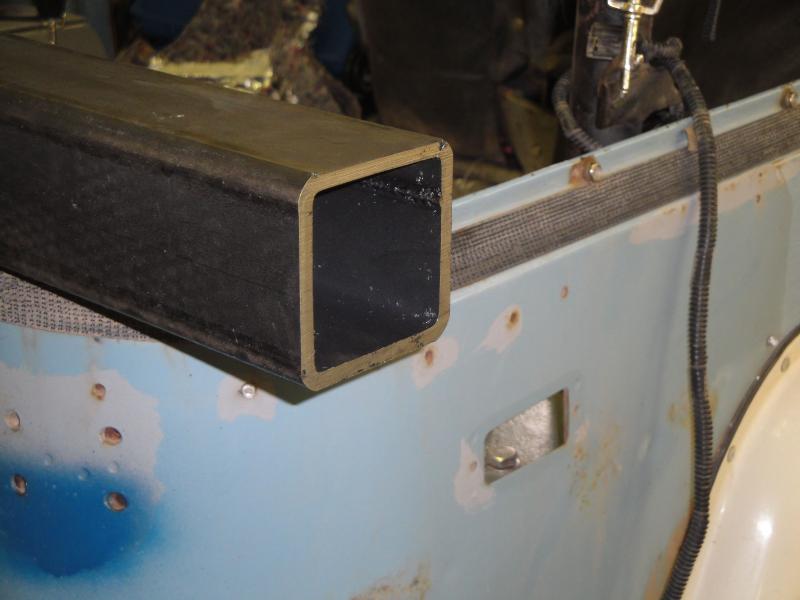 BTW, the blue spray paint is a test field for the new color on the rear

so right now, I am leaning towards using a second color - blue, of course

- and this was just a test on a spot previously primered by some PO - I want something darker, I think . . .

at the end of the day today:

I just missed the point where both were throwing sparks, dang 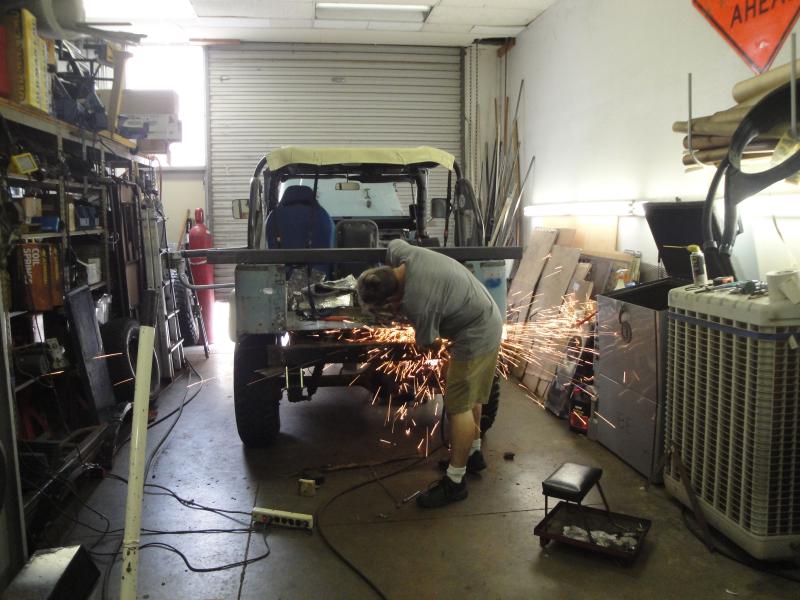 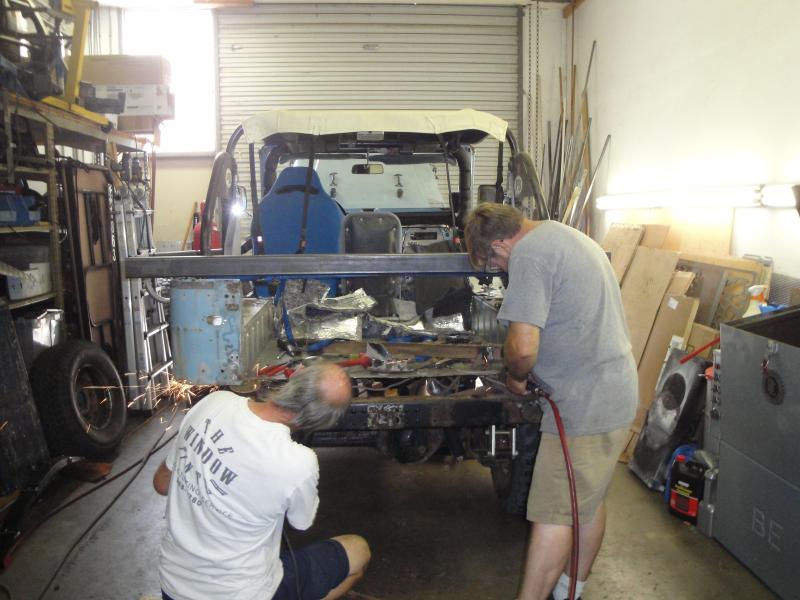 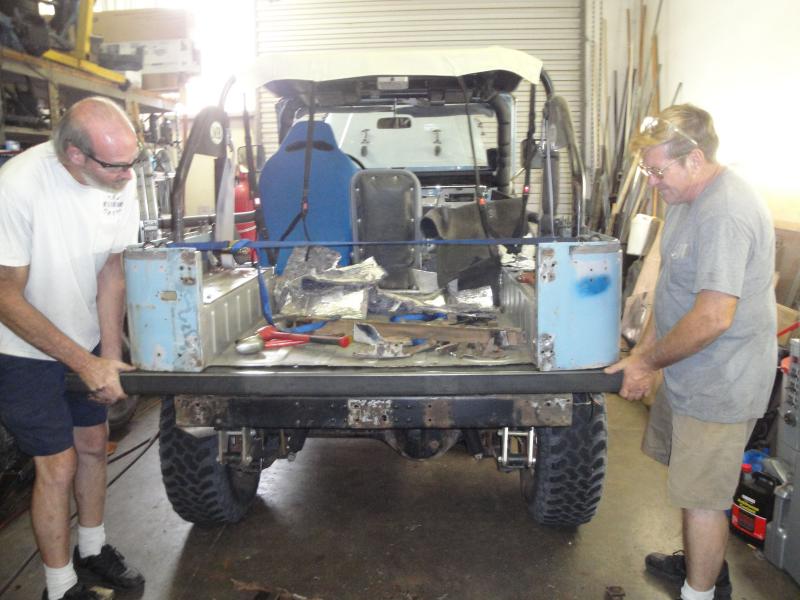 Nice tlc thread Claudia. Look forward to seeing the rest of it.

How far are you taking the redo. Frame off or just the once over.

Don't fix it up so much that you will be afraid to take it wheeling! Good luck.

That will never happen, she will wheel anywhere - we tease her about being the three wheeled wonder because one wheel is always "levitating"!

Claudia - looks like the guys at the LS&E are fixing her up nicely! Ar they adding your new built 60 series axle also on this session?

scrapdaddy said:
How far are you taking the redo. Frame off or just the once over.

so many memories: priceless

PabloCruise said:
When does the H55 go in?
Click to expand...

murf said:
Are they adding your new built 60 series axle also on this session?
Click to expand...

you can't go power steering! at one of the moabs many years ago, i gave my 20something buddy crap for crying about having manual steering. i told him a poor weak old woman like you can wheel circles around most with manual steering, so he better buck up
It's a 1F, they are too stupid to die. - jim c

nuclearlemon said:
you can't go power steering! at one of the moabs many years ago, i gave my 20something buddy crap for crying about having manual steering. i told him a poor weak old woman like you can wheel circles around most with manual steering, so he better buck up
Click to expand...

64 FJ45 having problems getting the truck to move forward
2

found some neat vintage tires at the landfill

J
I'm only getting spark when I let off the ignition.

Squealing noise from steering, but only with aftermarket AC on, and steering is getting hard
2