Project: "Not going to do a frame off" Frame Off

Well I bought this sweet 1970 FJ40 with all the intentions of just getting the engine hooked up and running and "eventually" do a frame off resto, at least that's what I told the wife. So now, 4 weeks later, and a few dollars lighter, the body is off the frame.

I'm in it for the long haul!

I bought this 40 from a guy who bought it about 4 months ago from a Georgia State auction. It was a forest vehicle somewhere in the northern part of the state. It had been painted a dark green to fit it's role as a forrest vehicle. As far as I know it spent its time from 1970 to April 2009 in the state of georgia, owned by the forrest service. It then moved to TX where the PO pulled the F engine out (which he said had an original 39,899 miles on it) because he didn't think it had enough power. The tranny also got the kabosh. In went a rebuilt sbc 350 and rebuit 700R4. The PO then decided to sell it as he said he didn't have the time to rebuild the truck. Enter stage right, in comes me. I bought it for $4000. The body is straight and not much rust. It doesn't run, but hey, who needs a 40 that runs! Here it is all loaded up. 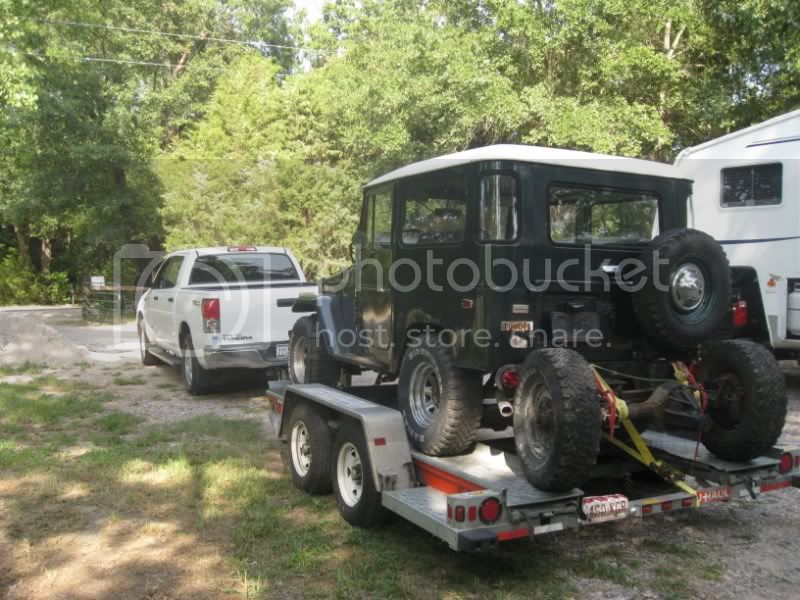 I hauled her home and had no intentions of taking it down to the frame. I thought I'd put it in the garage, order a few parts, and voila! Oh, how I was wrong. 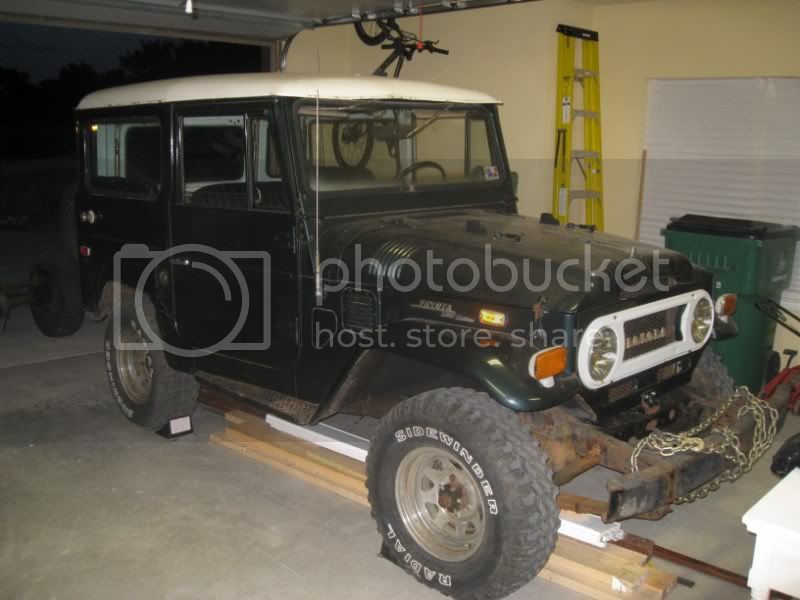 The interior was in pretty good shape. The seats look like they had been reupholstered at some time, and are in really good shape. 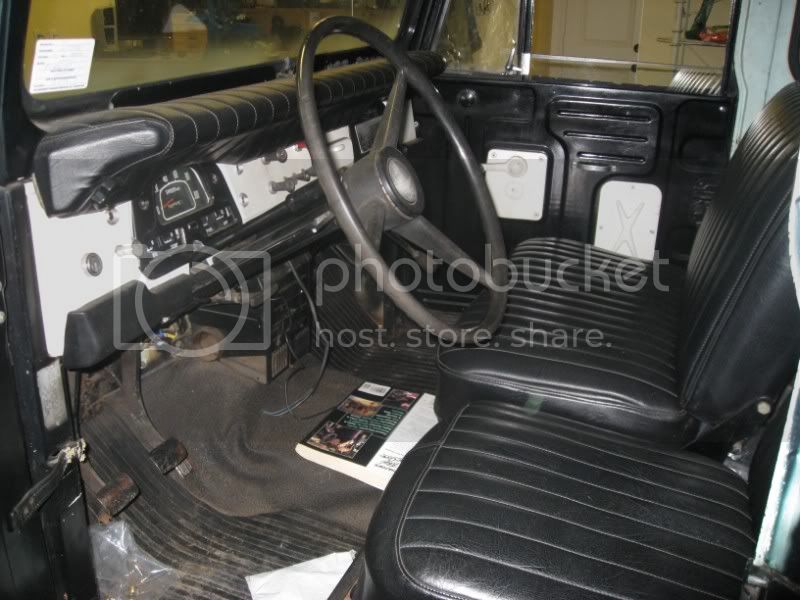 So now I tell myself, I'll start by doing a few easy things, you know,

jobs. I took the old carpet out which revealed the drivers side floor board eaten away w/ cancer. 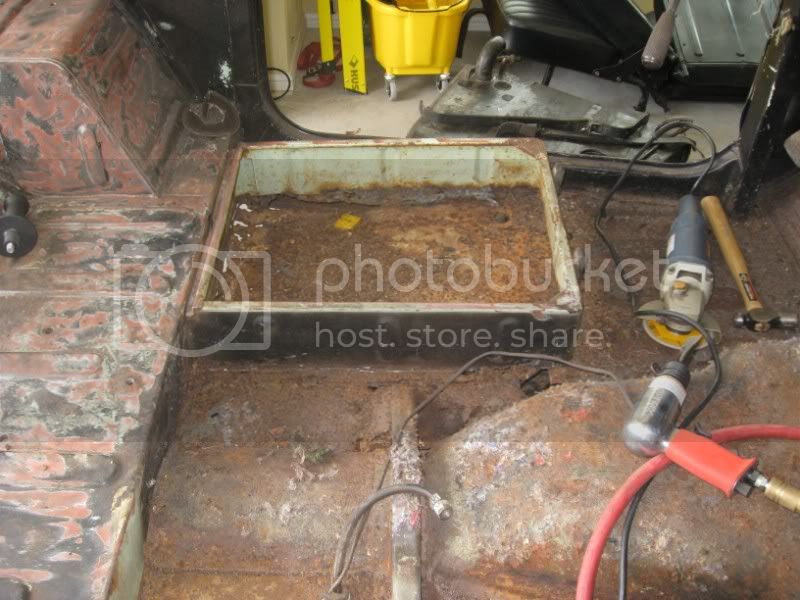 So I started grinding and cutting. The drivers side floor board and inside rocker where really the only bad spot. I cut out a few sections in the rear of the tub and welded in a new piece of metal. Ordered a new floor board from CCOT (still waiting on it to get here, 4 weeks later). 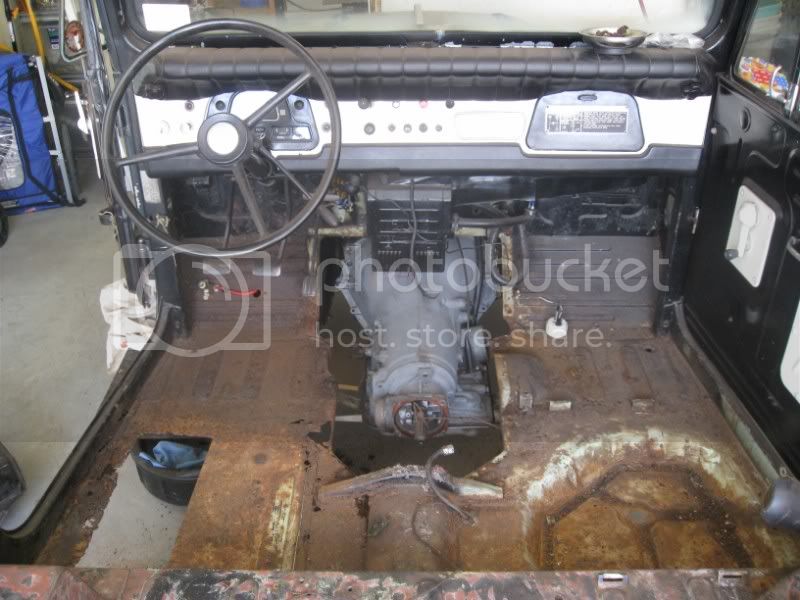 I started wire wheeling all of the old glue that held down the carpet and primered the rear and passenger side. The tranny tunnel is also in bad shape. The rust had worked its way from the drivers side and got all the flat section that bolts to the drivers side floor board. 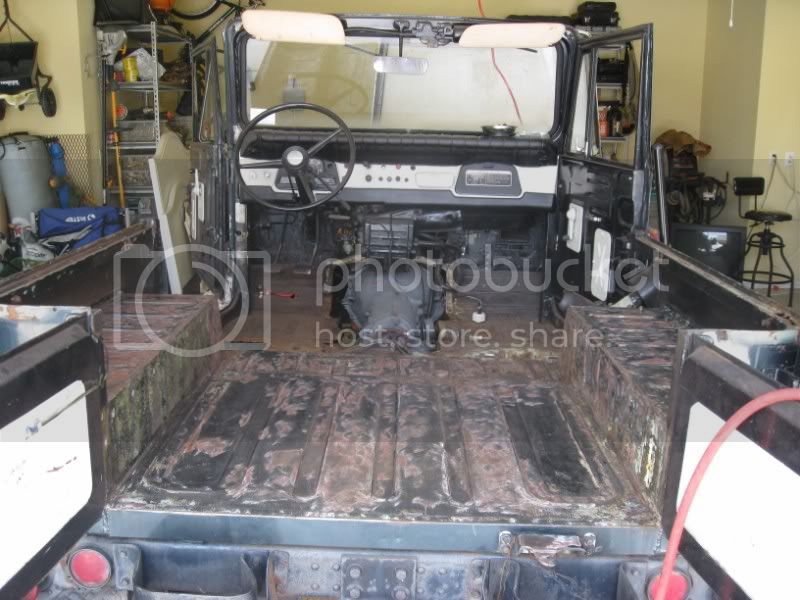 I got the rear and front passenger side primered after all the glue was up. 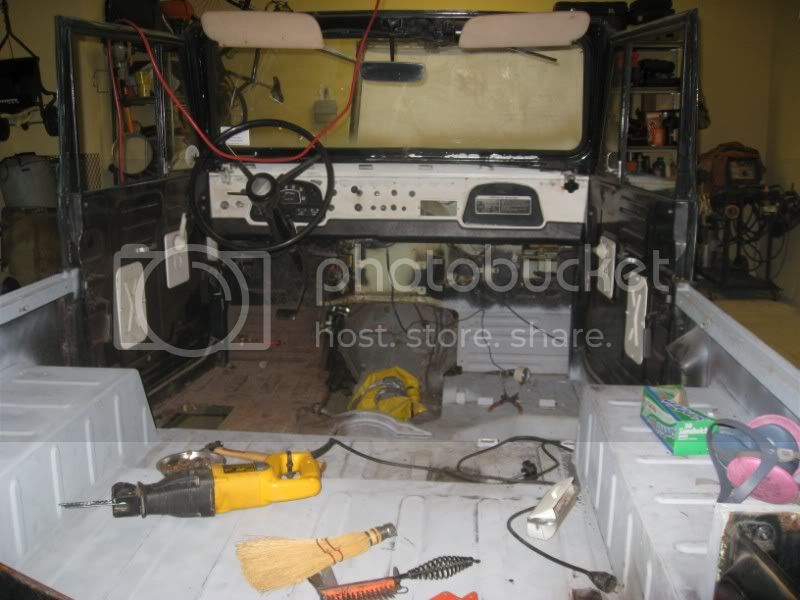 I then started looking at the motor mounts. I didn't really like the mounts the PO had used. I asked a a few guys on MUD and found out they were a JC Whittney mount. The problem was the Xmember used on the motor mount was too close to my front pumkin. There wasn't enough clearance and I was afraid that if I had a good bump or loaded the shocks, it could cause the front axle to strike the Xmember. So off came the aprons, fenders, & radiator. This 40 that was suppose to be a quick and easy was turning into a true project. 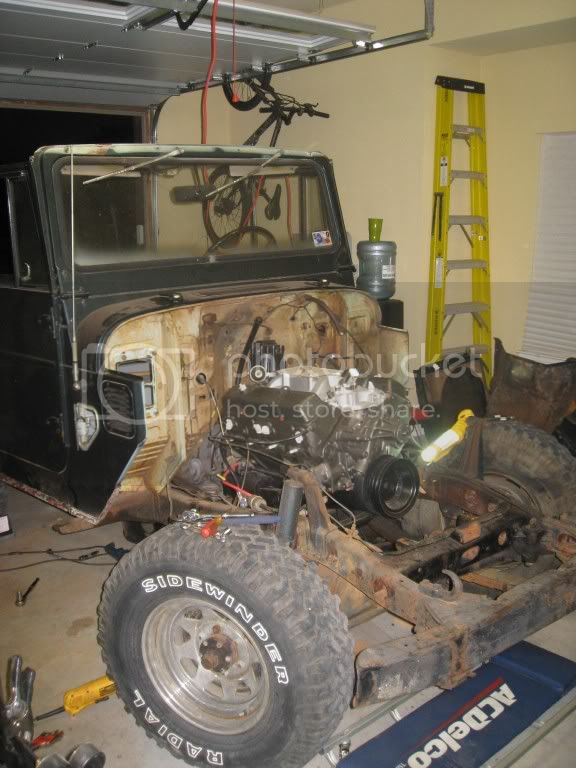 Here's a picture of the mounts: 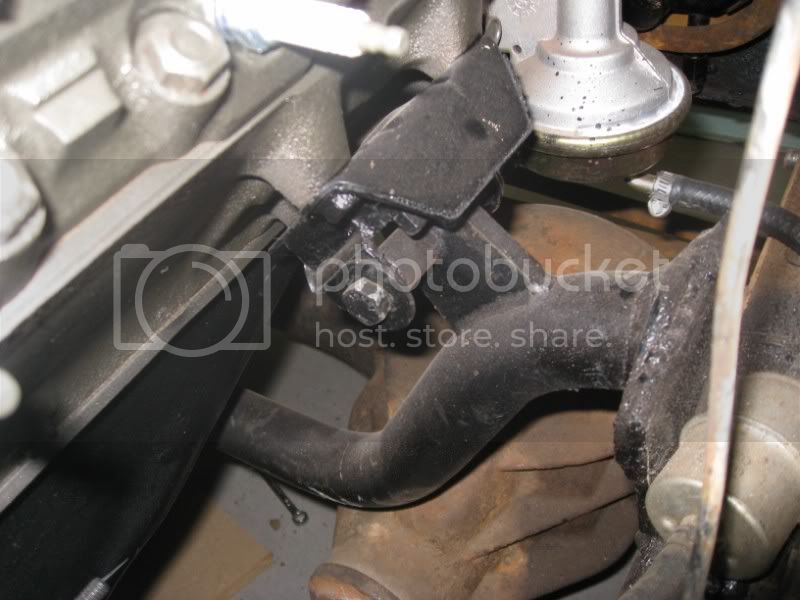 It was then I realized "this is going to be a frame off". I then bought a crap load of POR15 (marine clean, metal ready, silver POR15, black Chasis coat) off ebay to seal the deal. I started wrenching on old rusty nuts and bolts (bought a few bottles of PB Blaster) and got the body off. 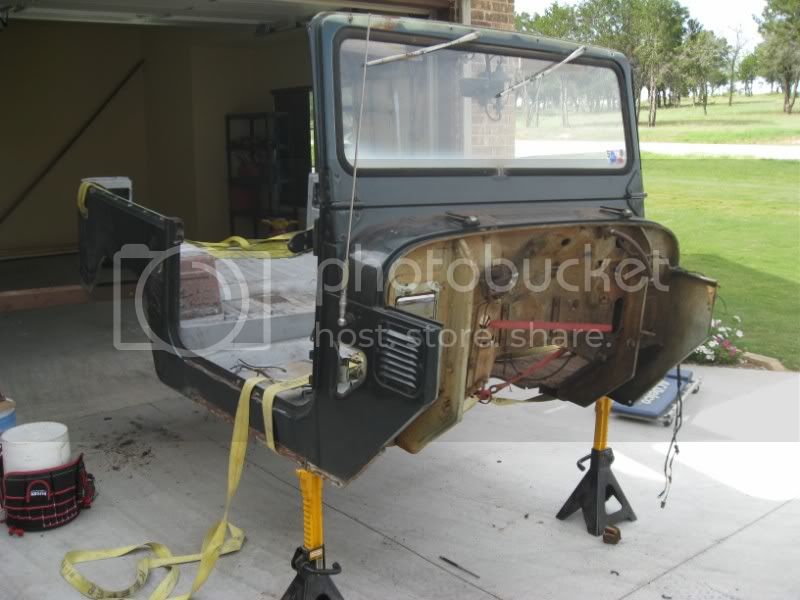 I went to Harbor Freight and bought an engine hoist. I'm glad I did too, otherwise I don't know how I would have got all this done. I then got down to the motor. 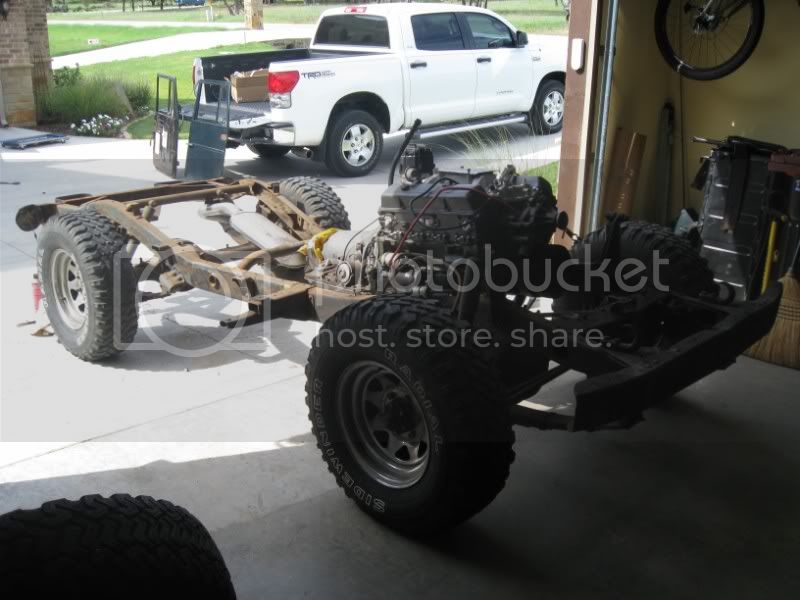 I loosen the bolts on the mounts and out came the motor and tranny. 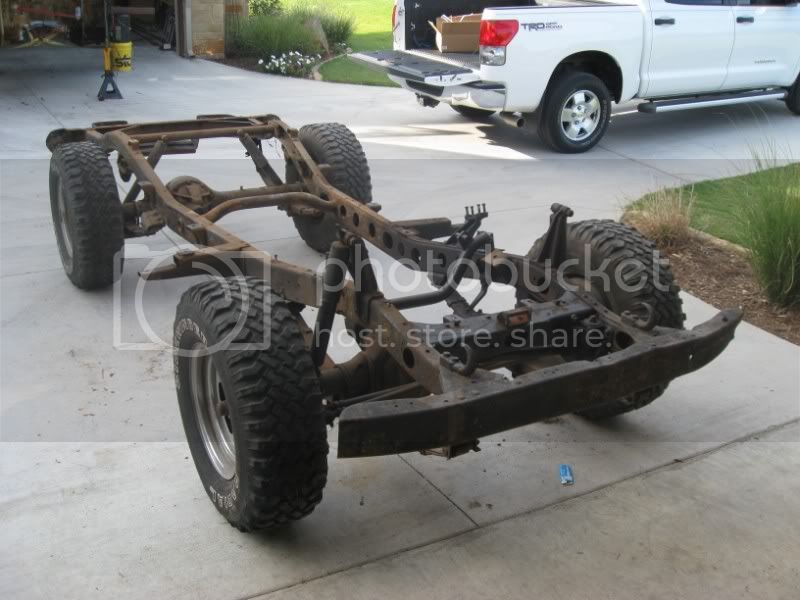 I took a few more pieces off, bumper, etc then it was off the car wash for a degrease.

job was turning in to

After hauling the 40 and a ton of quarters to the car wash, I got it nice and degreased. I used the marine clean and metal ready to prep the frame. I decided to leave the axles on (easier to move around). I'm trying to decide if I should POR15 the axles or just frame. Anyone know if there is a disadvantage to POR15'ing your axles vs. spray painting them. I'm thinking for ease of taking the diff covers off, paint would seem easier. 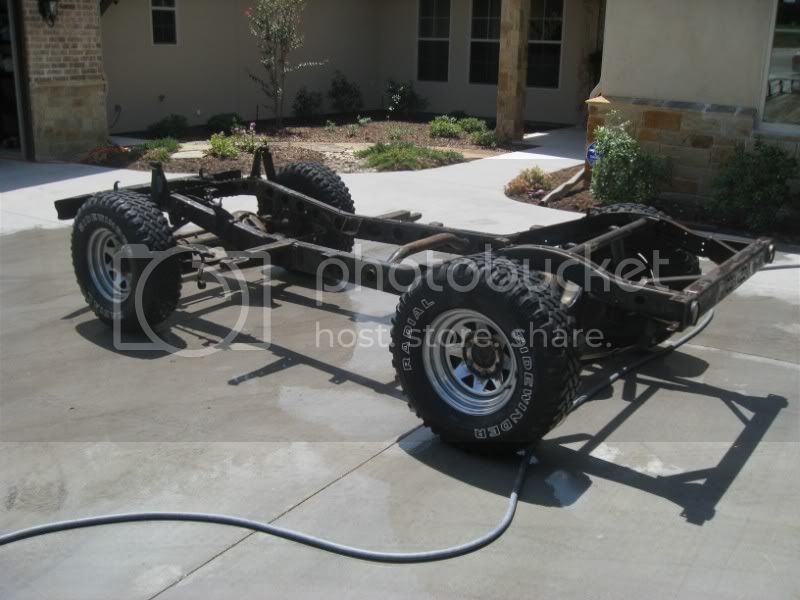 Pushed her into the garage w/ the body and started POR15'ing the frame w/ silver. I bought black chasis coat so that I can see what kind of coverage I get w/ the chasis coat and so I don't miss anything. I used 1 quart on the frame. I have 2 more quarts and will probably use those on the second coat and axles (as long as I use that on the axles). 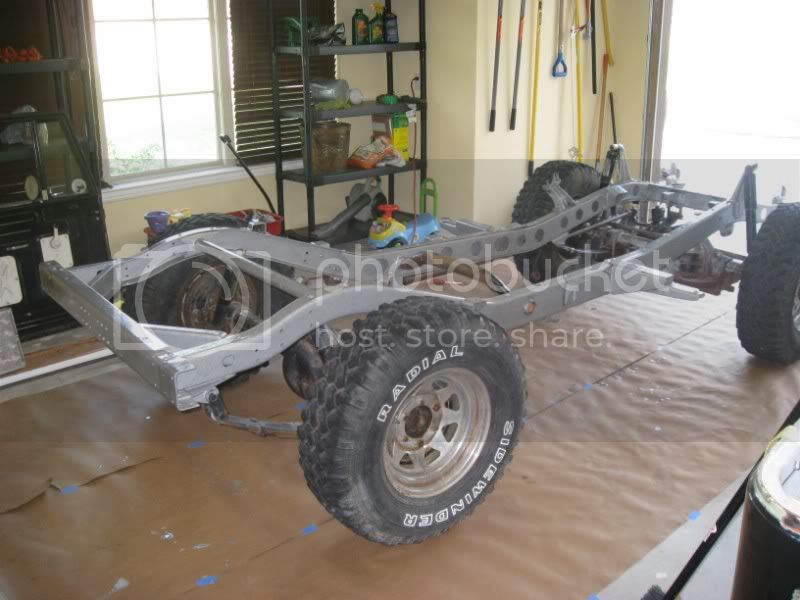 Good thing the wife is out of town for the next few days. The 40 has taken up both garages and pushed my Tundra to the driveway for a few days. I have to work tomorrow, but hope to get the final POR15 coat on Sunday morning and then a chasis coat on by afternoon and get everything moved back into the man cave! 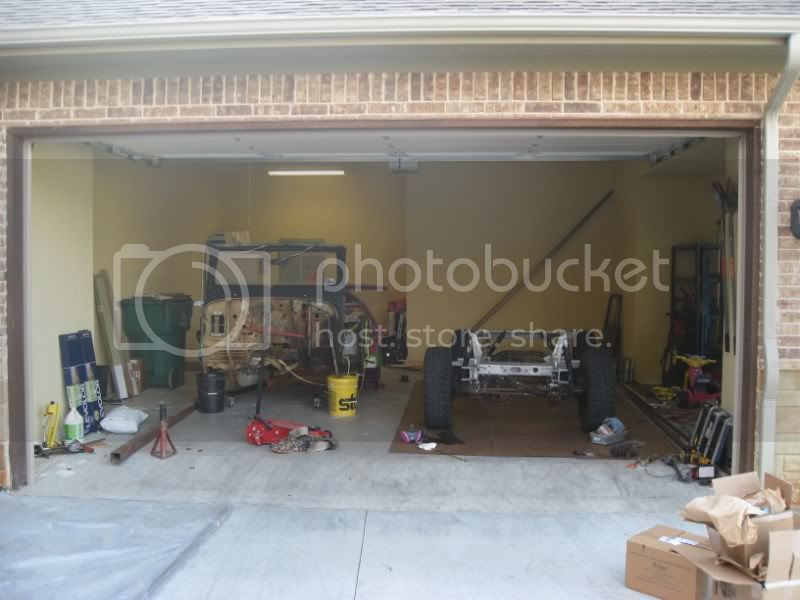 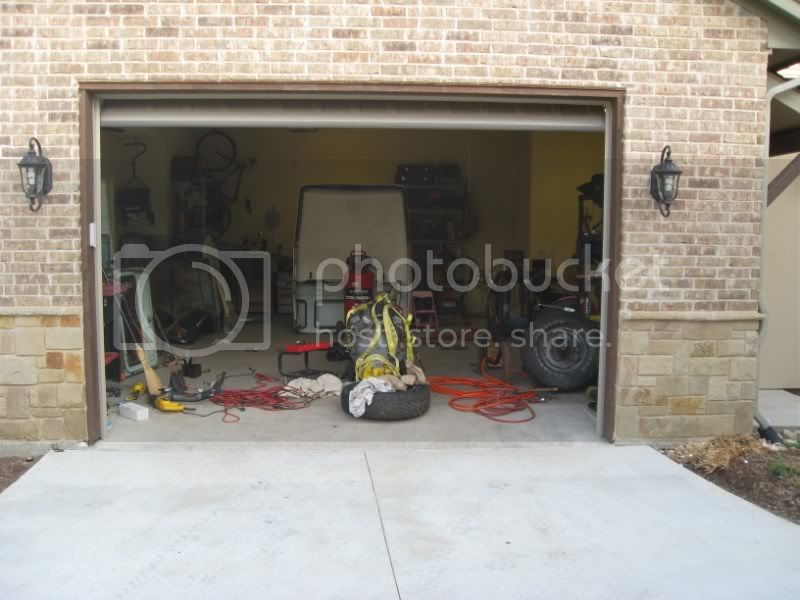 looking good. oxyartes is in the same boat as you right now.

we're slowly plugging away on his 73 trying to get ready for the annual moab trip in october.

**80/82 Toyota Pickup "Katy's Krazy Krawler" one day to be a crawler again, currently in a state of disrepair.**

"The second amendment is the most important. You don't even need the first. You can say anything you want when you have a gun!"

Well I had some more time and put the final POR15 chasis black topcoat on the frame. This is my first time using POR and am happy with it. It's rock hard after 24 hours. 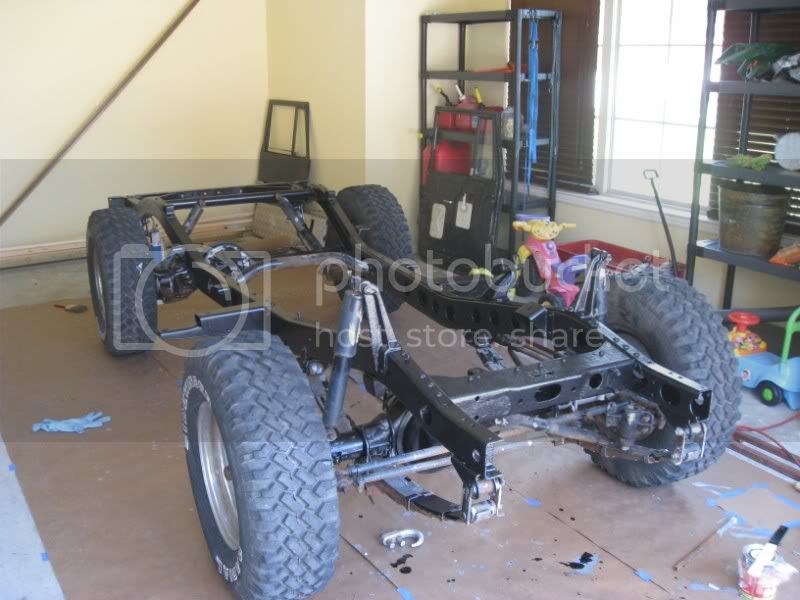 I then started wire wheeling my firewall and then cleaned and etched it. I've got to find some new grommets. Mine were toast. 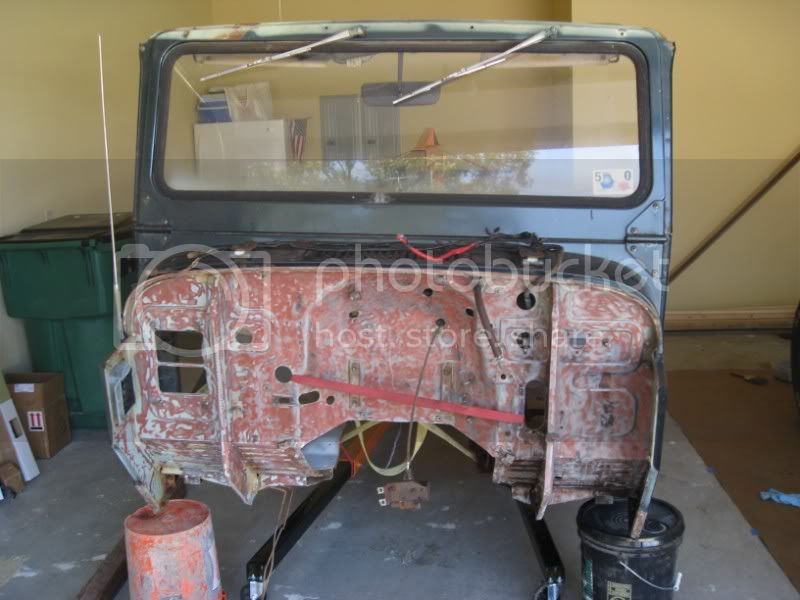 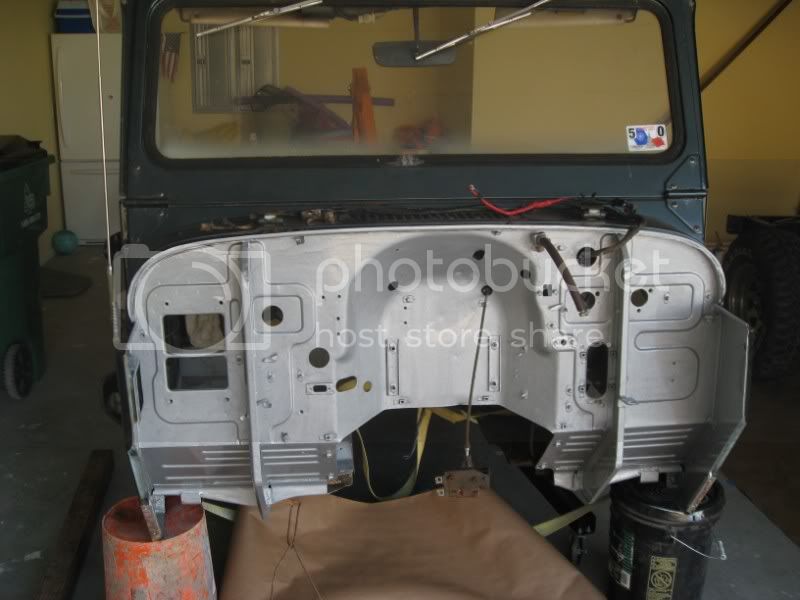 I finally got my CCOT drivers side floor pan in. Sooo, I broke out the angle grinder and sawzall and started hacking the old rust drivers side out. 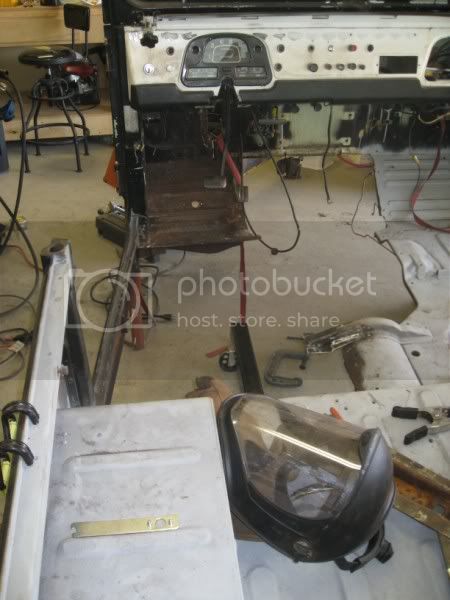 After a little test fitting and friendly metal removal, I got the floor board in. I had to install some new steel next the center floor board arch (or whatever this is called) as well as new steel that the tranny hump mounts too. Unfortunately the rust had eaten this completely away and started eating the drivers side of my tranny hump. 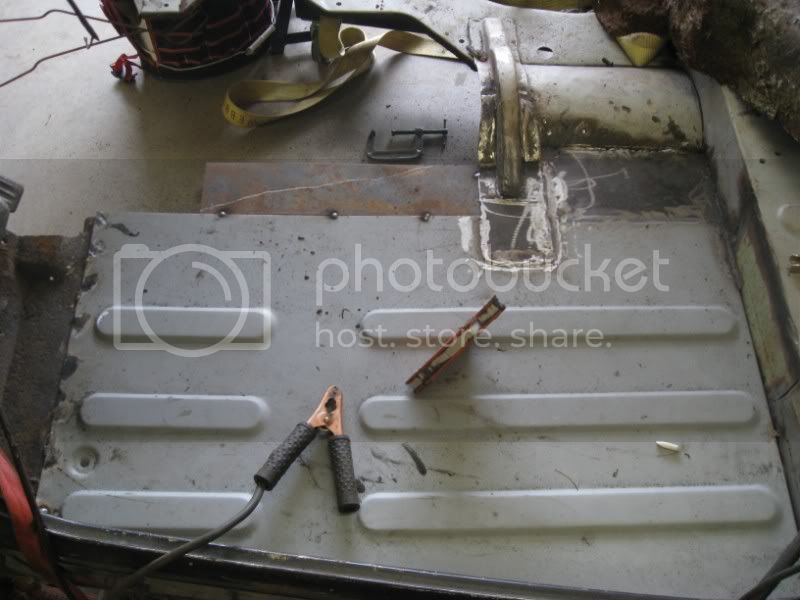 I had to reinforce the stock square tubing bracing that connected both floor boards over the arch. Rust had pretty much eaten this one away too. Rather than cut it all out and build a brand new brace, I added steel to both sides as well as underneath. It worked out pretty well but was VERY time consuming. 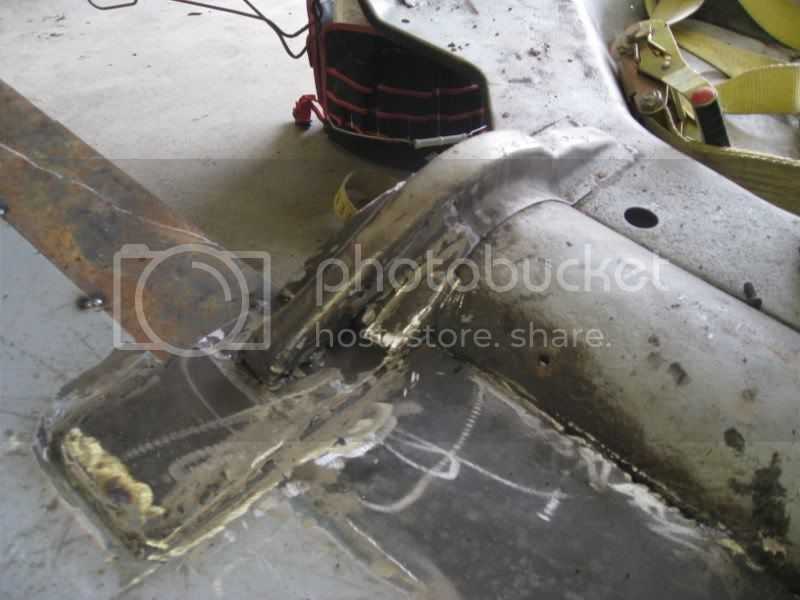 Here's another shot of it all in and grinded down. Now to try to salvage my tranny hump. 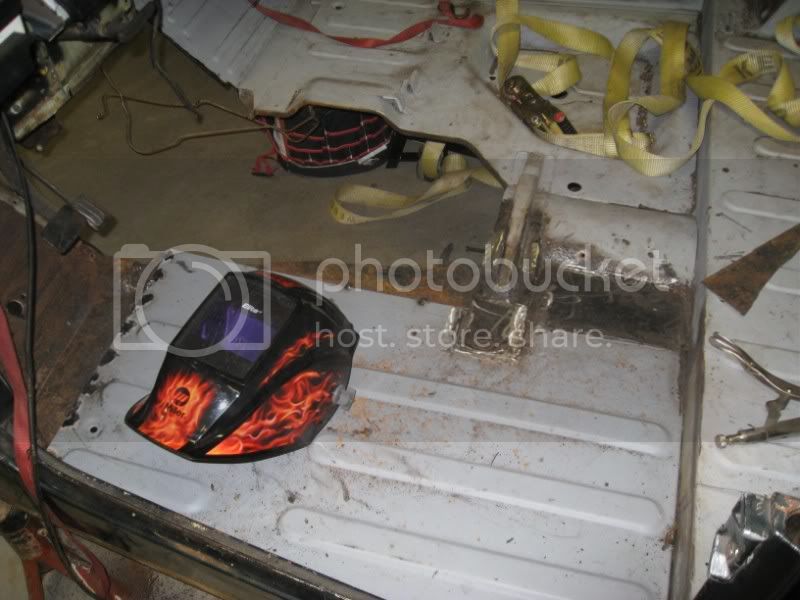 Most of the driver side tranny hump where it meets the floor pan was rotted out. I cut about 1" up the side and decided rather than try to find another one, I'd try to reinforce it w/ some extra steel I had and see if I could live w/ the look. Here it is tac welded up. 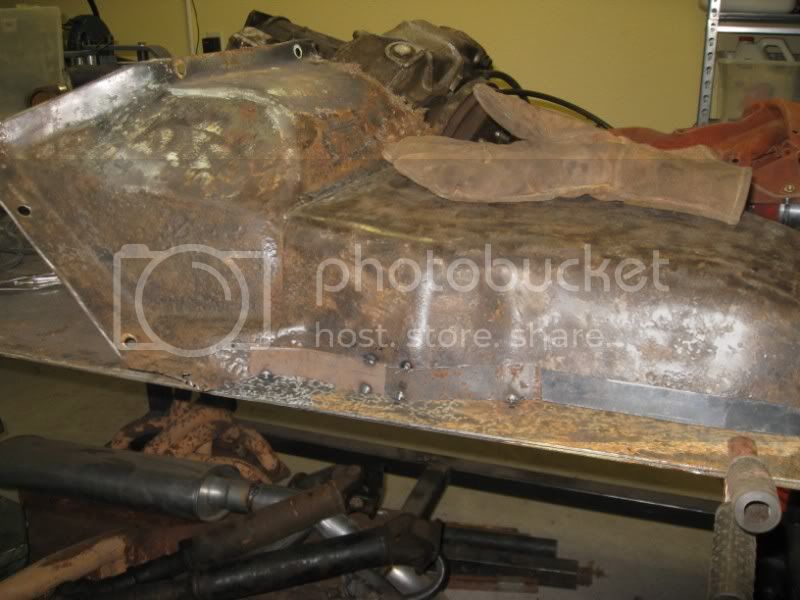 Here's a shot before its cleaned up. Getting the compound angles on the steel going up the side and around the corners was a chore. 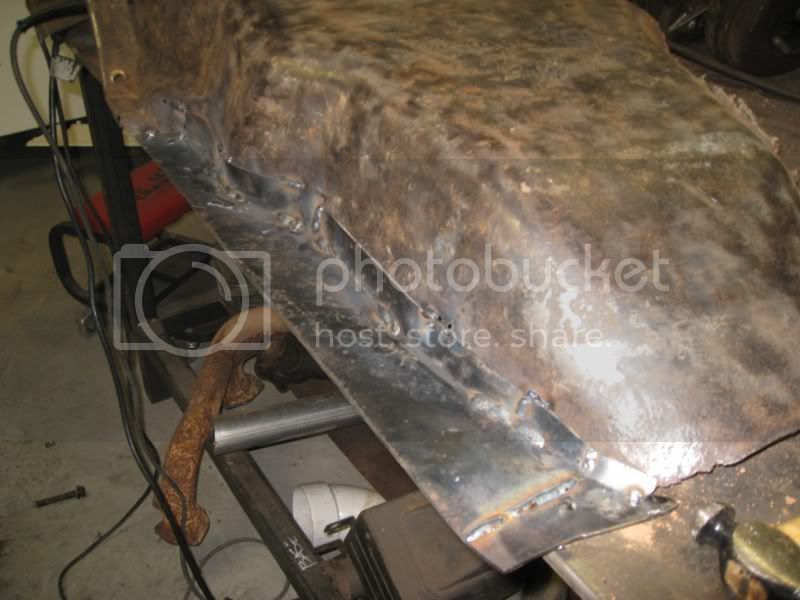 Cool project. I just went through the same thing with taking up all 3 spaces in my garage with my 40. Wife came home opened the garage door to find the trailer with the dirt bikes in it ( that she already told me not to move. ) was gone. needless to say she wasn't happy. I will be watching your updates.

Alright, so today I had a little time and decided it was the day to drop the 350 back in, this time sitting on Matt Bier motor mounts. These mounts are sooo much better than what the PO had put in. 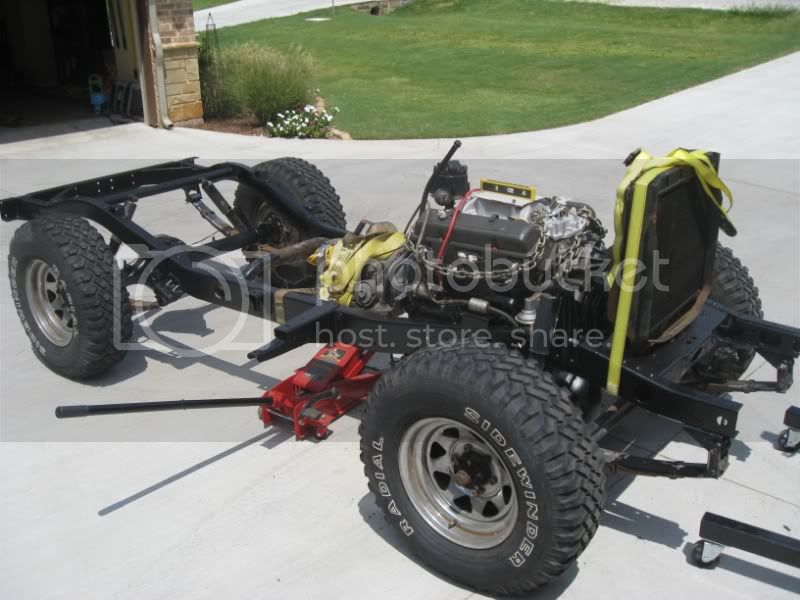 Then I lifted the tub up and started wire wheeling the underside ... this took a while but turned out pretty good. 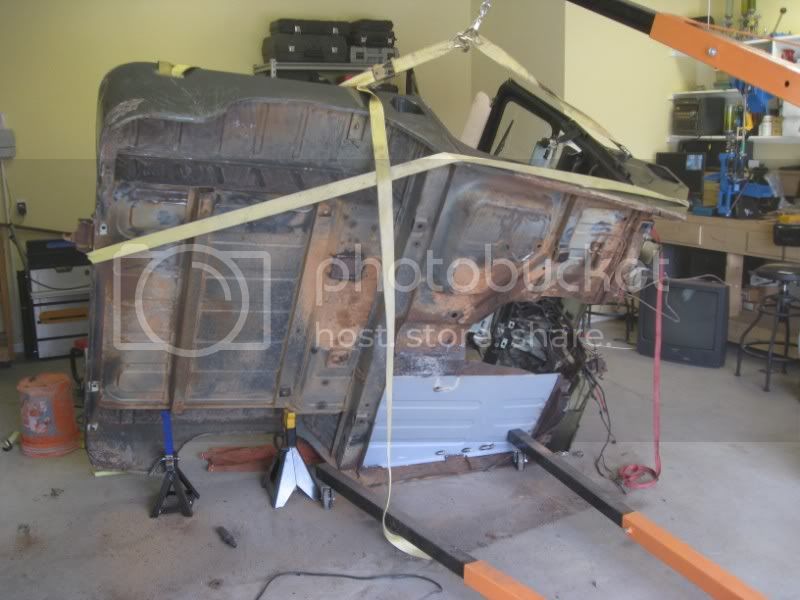 Then I used my POR15 products. First up was the marine clean, then metal ready. After all that dried, I put on my first coat of POR15 rust stop on the underside of the tub. I really like the silver look, in fact, I think it looks better than the black chasis coat, but since it isn't UV resisant and I'd like to protect this as best as I can, I'll put the chasis coat on Wednesday. 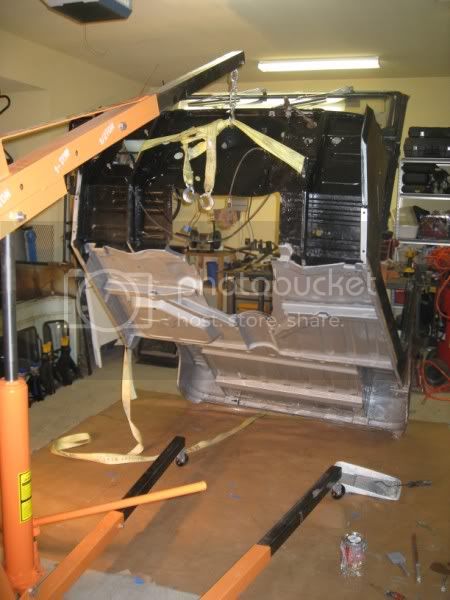 very nice. I remember those days... picking out wire from every part of my body. por 15 eventually wore off my hands after about 2 weeks.
'96 mostly stock FJZ80 --- Wrecked ---
I visited the land of the banned... it's a nice place, really it is.

trekker said:
very nice. I remember those days... picking out wire from every part of my body. por 15 eventually wore off my hands after about 2 weeks.
Click to expand...

Ha, exactly. I had wire wheel sticking out of my thighs and shins. At work yesterday, a guy asked me why I had silver paint all down the backside of my forearm

Wow, you've made a lot of progress in a short time. Congrats and keep it up! That's gonna be a great cruiser when you're done.

2F dieseling at shut off.
2