Budget 2 days seems about right. If all goes well you can finish in 1, but best to have that extra day if you need it. If I remember my first time, I think one side took about 6-8 hours and the other side took about half that. I did not spend as much time cleaning as most MUDers would, didn't paint anything, and nothing went catastrophically wrong (just snapped one of the bolts that hold the wipers on and left it that way to fix later).
"The Clunker" 1996 Lexus LX450: turbo, lockers, cupholders, 340k and counting
"The Minivan" 2010 Lexus LX570: mall crawler, camper hauler
Just the latest in a loooong line of Toyota 4x4 s***boxes

The first time I did this a friend of mine and I did it in one long day. A decade or so later I did it on my own, but thoroughly cleaned everything and painted everything. I also discovered the birfs and spindles needed to be replaced after I tore everything apart. It took a lot longer the second time.
1994 FZJ80, OME850/864 w/ CSC 1.5" spacers, 255/85 r16 Yokohama Geolandar MT, 185K
1986 4Runner, stock, 145K
"SUBDUCTION leads to OROGENY"
"Strip Mining Prevents Forest Fires!" "Stop Continental Drift!"
"Tuff Schist" "Reunite Gondwanaland"

2 days... but ya gotta have a mugwug who understands the importance of cleaning parts in a tub of diesel until they glisten.
91 HDJ-81 with "Cool" button
93 80-Series Classic Condition
78 FJ-40 Bush Buggy
"Old Cruiserheads never die... they just get parted out."
K

@R0bl said: "Does anyone know a reliable way to remove the spindle bearing from inside the stub axle ?"

Are you referring to pulling the brass bushing from inside of the spindle tube?

Only way I've seen is by using a large inner bearing puller something like this:

Rowdog said:
What are the odds I can get it done in a day?
Click to expand...

I'd say pretty low if it's your first time.


Kernal said:
One day to one month.

You'll spend (should spend) the majority of your time cleaning parts.

If a PO has boogered something up, and you need parts, could drag out. Or if something goes wrong for you.

Cleaning is the most time consuming part without doubt.
I generally don't paint, but do prefer to clean everything back to spotless.

Doing both sides at the same time makes it faster and more efficient rather than completely doing one, then starting again in the other side.

Degrease and pressure wash as thoroughly as possible.

I have a couple of big commercial bake trays I use for these jobs. One under each hub keeps spills of birf soup of the floor, and catches/ holds tools etc.
A square metre of old tarp or heavy plastic is a good alternate option

Kernal said:
@R0bl said: "Does anyone know a reliable way to remove the spindle bearing from inside the stub axle ?"

Are you referring to pulling the brass bushing from inside of the spindle tube?

Only way I've seen is by using a large inner bearing puller something like this:


Ahh ok.. Most videos I have seen on hub rebuilds only show the example of tapping out the old bush on a older style stub axle with bush only setup.

On more recent solid front axle 'cruisers (Like the hzj105, 78, 79 etc) there is a small spindle bearing as well as the bush ... I tried tapping it out with a punch and the bearing got in the way, and with a socket it just destroyed the bearing punching through it , leaving the race in place 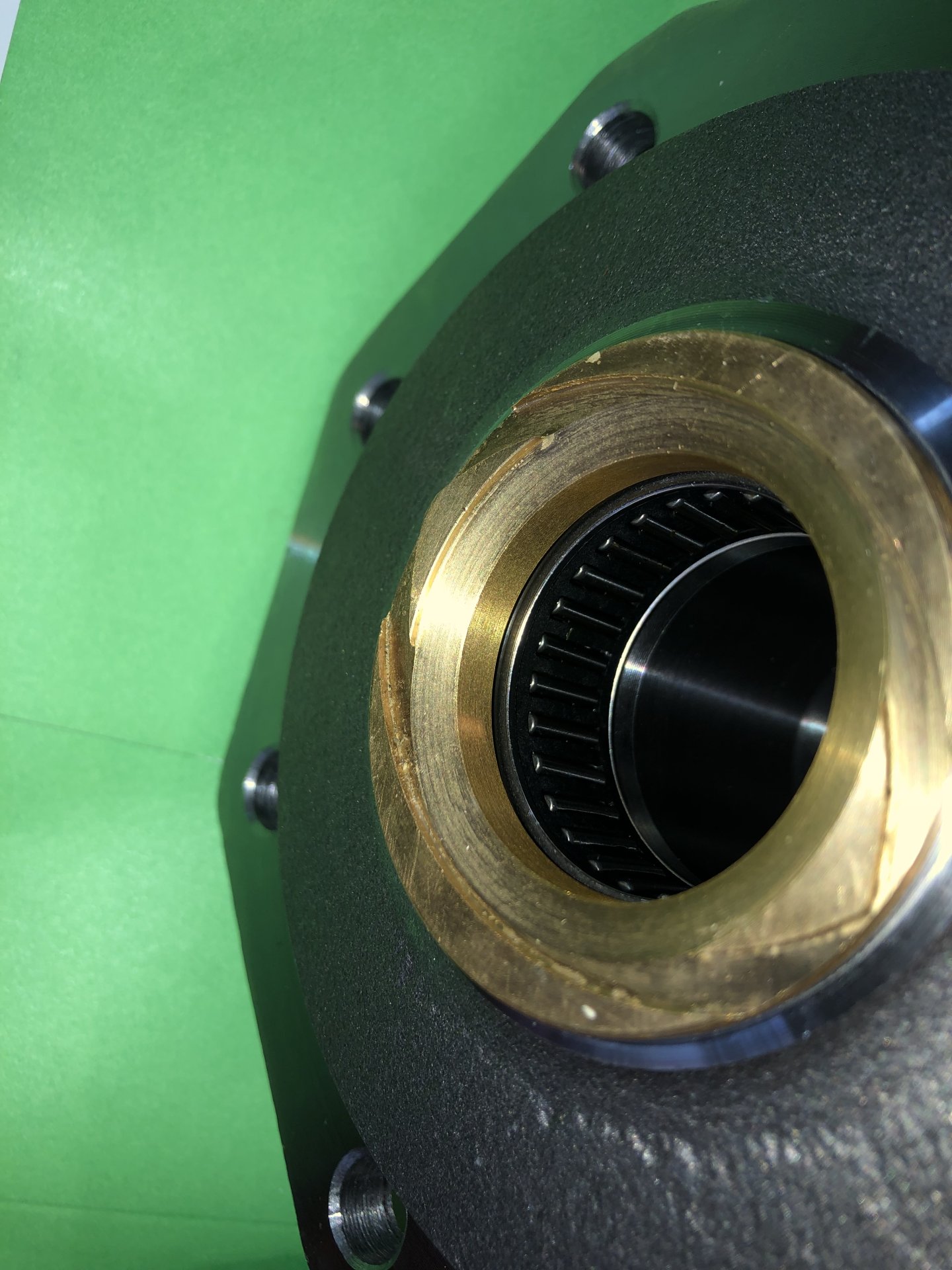 Rowdog said:
Hey all.
I’m finally getting around to rebuilding my knuckles, either tomorrow or the next day, for the first time and was really just wondering how long you all expect it to take me. I’m a first timer, but I have all the materials I expect to need (thanks to all of you kind folk.) I have moderate experience with mechanical repair, certainly above the average American, but I am in no way an expert. What are the odds I can get it done in a day? Thanks.
Click to expand...

Thought an update was in order, for any interested to see. First day was nearly all watching along the otramm vid, and referencing the fsm. Decided to focus the leaky side for the first day, so there was almost no old grease to clean at all, just diff oil, which I learned in the future is much easier to wipe up than grease. Things moved along about as anticipated, other than that I noticed I had a seized caliper. (Of course…) spent about 10-13 hours on this side, only got to re installing the tie rod. Second day consisted of me playing with grease, getting side one finished, replacing the brake caliper, rotor, pads, etc. and working on the pass side. Pass side, considering I didn’t have to reference the video and was also working on brakes, took about 6 hours. Threw in an oil change and she was good to go. I’m no longer unbelievably stressed about ruining my birfs every time I drive the ol girl. All in all, grease sucks, take your time, and keep on keepin on, even when you realize your caliper is ruined.
Thanks again to everyone who replied, I truly appreciate all who are apart of this community and are so willing to help.

Rite of passage. Nice job. Be sure you tightened the two large nuts on the bottom of the knuckles to the proper torque. For some reason those tend to loosen on people's rigs. I superstitiously check them before any long trip but mine have never loosened. Well done.
Buy Head Gasket DVD for you OR for your mechanic HERE

IdahoDoug said:
Rite of passage. Nice job. Be sure you tightened the two large nuts on the bottom of the knuckles to the proper torque. For some reason those tend to loosen on people's rigs. I superstitiously check them before any long trip but mine have never loosened. Well done.
Click to expand...

My torque spec wrench is funky, I’ll be sure to feel them after a few drives though, I appreciate it.

Nice work. I’ve probably spent more cumulative time on fine tuning prep, lists, reading, memorizing etc than I will on the job itself, hah. I’m just that way. Finally going to do it this weekend or next, my last chance before the snow flies as October is too busy for me.

There’s a lot of good reading in this thread about knuckle studs/nuts and fasteners in general - was helpful for me in understanding where the loosening issues may come from and how to ensure good results.

I don't want to keep the "stuck in grand junction" thread going, don't want the thread title to worry anyone. I want to try and figure out what is happening here, other than neglect by me in checking this on my rig after wheeling trips and before long trips. (FYI...if you did not see my...

ppc said:
Slim, if you want to do it right. I would expect 20+ hours
Click to expand...

Just chiming in as I did this almost a month ago now. This is probably around the hours I put into it, but I don’t rush, and like to be thorough, plus time for beer and farting around. As everyone knows, most of the time is cleaning. I did it casually, broken up over a 4 day weekend, probably 2 days total. At my leisure before hand, I taught myself the job and rarely had to reference anything. Not too bad for my first time working on knuckles. If it weren’t for cleaning and re-packing, it would be a short job.

Pretty easy if you have general tinkering skills. Some of the “optional” stuff that I chose to use were race drivers instead of just drifts, and the wits end seal driver. Probably doubled my estimated blue towels and brake cleaner too.

Hose clamp over the clip was what worked for me to reconnect birfs when I switched sides. Zip tie wasn’t going. I used PVC tubing over wood to separate them.

Should be many years, but wouldn’t hesitate to do it again. Nothing broke or went wrong. The only swearing was when refilling the diff, because I don’t like hand pumping gear oil.

Made sure I was thorough when seating the wheelbearings, maybe overboard but looks like I got it right the first time.
Last edited: Oct 23, 2022
'97 FZJ

go ahead and get an entire case of paper towels and probably 2 boxes of gloves. Don’t be afraid to use lots of supplies to clean.

Cleaning is a huge step with the job and I suggest painting some parts to keep them looking good. Makes it easier to finish the job when you are putting clean fresh parts back on.

Take photos as you go. When I rebuilt my axles I took the birfs apart and ended up putting one of them back together wrong. I questioned it and checked my photos to confirm what I did.
1995 FZJ80- locked
1987 MR2 - daily driver
2007 Audi S6 V10
You must log in or register to reply here.