As a parts vehicle what is this worth? With a clean title what’s this worth? Guy says it’s a 61 but can’t find the title.

Motor needs rebuilt. Drivetrain is original. Has 4 rims but pretty sure not stock. No top or doors. I’m going to check it out Saturday but never messed with early fj40’s. It’s cool but I’m pretty sure parts are a pain to find from what I’ve read. Also I really think I would pick it up to trade for 72-76 fj40 parts/ vehicles. Those are more my style and I would not feel right rebuilding this with anything but stock stuff since it’s an early model. I’ll get better pics Saturday but for now this is what he sent me. I’ll also get the Vin for the list. 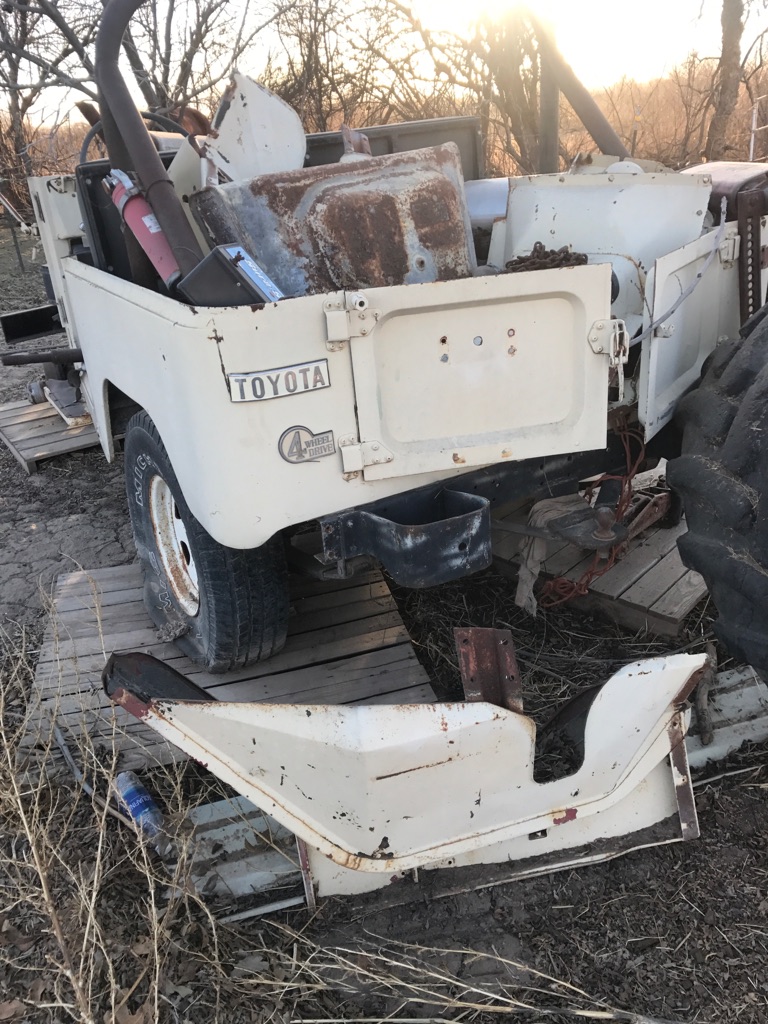 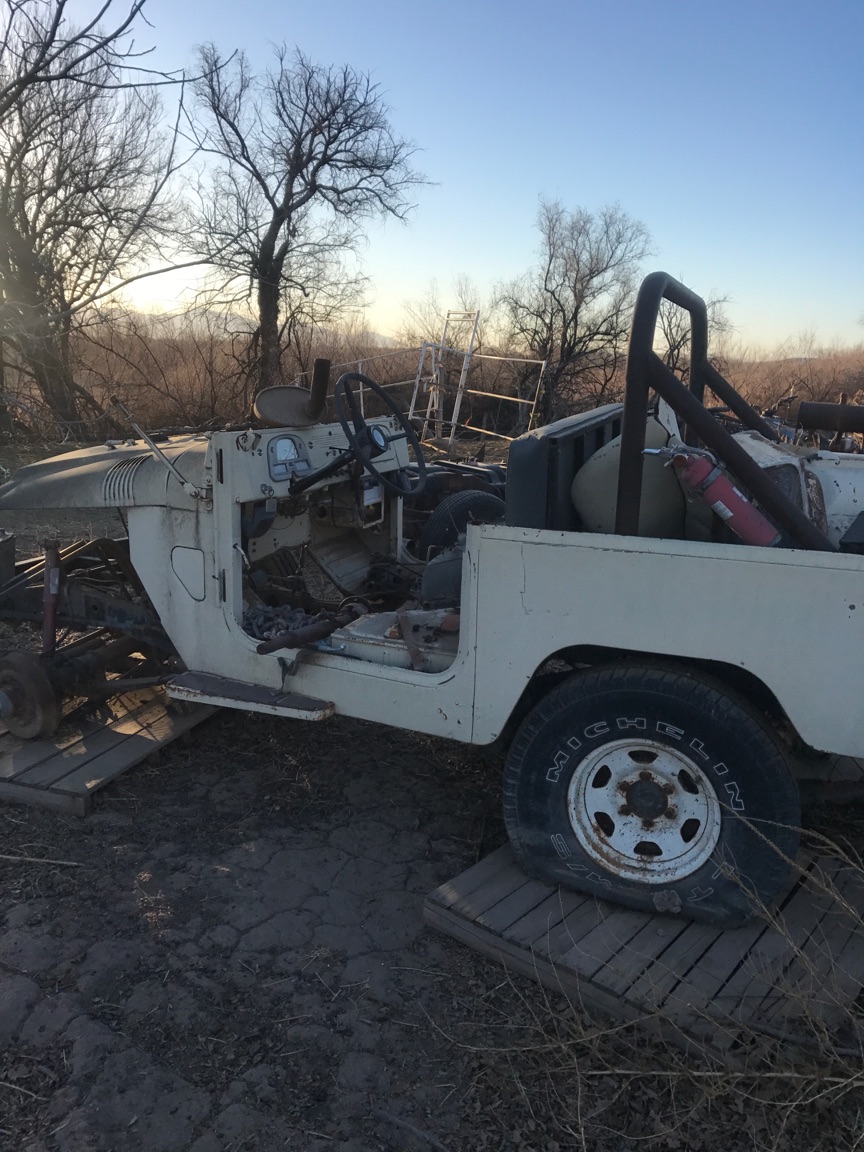 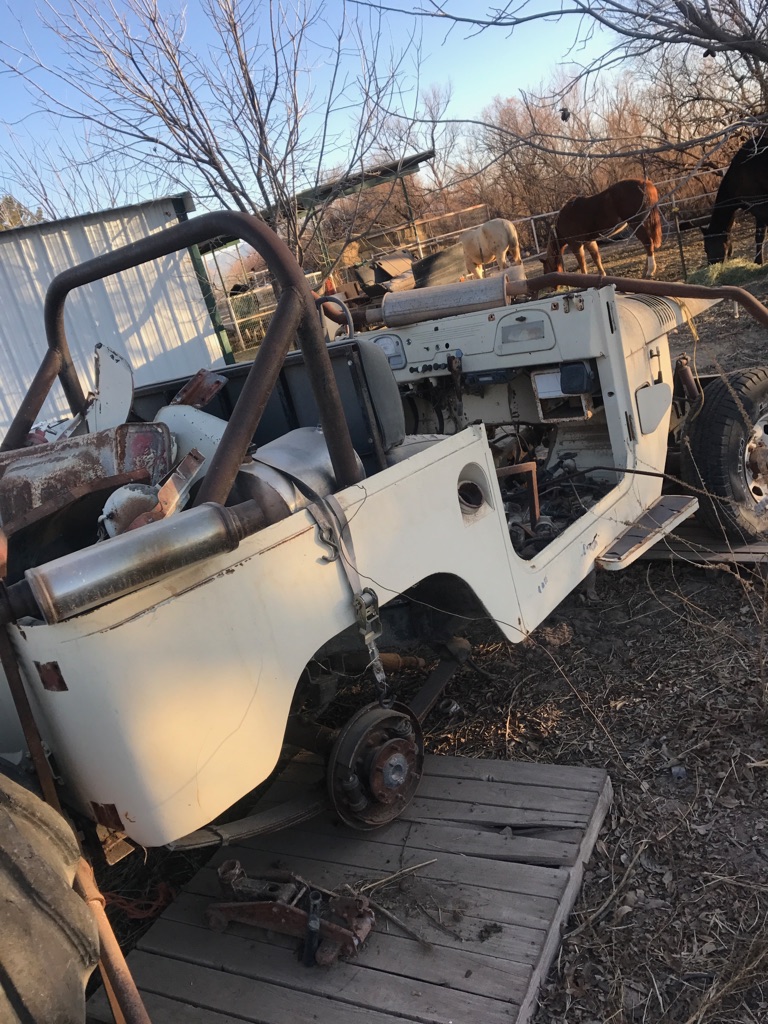 Those look like super clean parts. There’s way more than $1500 worth of sheet metal there if it’s not full of bondo, looks pretty original though. The only reason I would question the vintage is IIRC the 40 had the one piece drop down tail gate through 64. The 64 I parted did. The VIN will get you the year of manufacture.
Dick Thompson

How clean are the fenders ?
O

The vultures are already circling.

I see a silver-faced speedometer, which ended with the 1962 year-models. There is no ashtray, which is correct for a 1961. That particular Hupp heater is consistent with a dealer add-on for 1961. The high b-pillars which also ended with the 1962 models are frequently cut off, so the absence of them is not entirely dispositive here. The emblems on the left-rear quarter panel were not stock in 1961, so we know that this tub has been "messed" with to some degree.

If you go check it out in person, there are two tell-tale signs on whether the tub is truly a 1961. The first will be the presence of welded "bungs" on the front interior wheel wells for attaching the one-year-only rear jump seats. The second will be straight ribs on the floor at the rear of the cargo area as opposed to curved ribs at the rear of the cargo area seen from 1962 forward.

Perhaps the biggest clue, though, assuming I am viewing it accurately in the photo is that large fuel tank neck, which ended with the 1961 year-models and was noticeably smaller thereafter.

As for the price, how much is he asking? You might be able to get $1000 for the tub if it is as rust free as it looks. Maybe another $1000 for any other hard-to-find early parts altogether assuming there are more parts there than actually pictured? This cruiser is a hodgepodge. Unless you just have a lot of time on your hands to either part it out or reassemble it out of love I would not give more than $1000 for it, even with a title.
M

Cool thanks for all the info and advice to everyone. I"ll dig thru the thing Saturday and see what is there and take a lot of photos. And i will get the vin.
O

MIKKELSEN said:
Cool thanks for all the info and advice to everyone. I"ll dig thru the thing Saturday and see what is there and take a lot of photos. And i will get the vin.
Click to expand...

Not yet. Plate was taken off. He’s searching some parts boxes. Frame vin was covered by thick paint. I’m going to take a wire wheel with me on my next trip. As long as the vin doesn’t come back stolen I’ll be picking this one up.
O

MIKKELSEN said:
Not yet. Plate was taken off. He’s searching some parts boxes. Frame vin was covered by thick paint. I’m going to take a wire wheel with me on my next trip. As long as the vin doesn’t come back stolen I’ll be picking this one up.
Click to expand...


I see that you now have the stamped bezel from this 40 listed on eBay, which obviously increases its value as a parts vehicle for you.

Any progress on wire-wheeling the paint off the frame to reveal the vin? What is the engine serial number?

Also curious how you would characterize the overall condition of the tub and frame---rust free and solid? And how about the completeness of the vehicle overall---much missing?

All FJ40's are special - that one is no different in that regard.

Title adds value, for sure. But, as others have said, a "no title" rig can, in many cases, be titled. I personally have walked away from a number of no title trucks because I don't want the hassle or the uncertainty. Your mileage may vary, as they say.

I've always wanted to find an old one that looks like that and park it against my back fence and just look at it from time to time.

I love the dashboards of the early FJ40's.

I picked up 1/2 of it. The bezel included. I wanted the most valuable stuff in case the guy hoses me. I saw a bezel that sold for something stupid on eBay so I figured I’d give it a shot. I’ve never liked the stamped bezels. I figured If I keep the 61 it will get a normal bezel.

It has a 2f swap that also took away from keeping it complete as well as a stupid paint over what originally was a nice red fj40. Guy could never find a vin plate. I need to wire wheel the frame still. I’m suppose to pick it up in about a week. The running boards will go to Oregon fj if he still wants them then I’ll sell off most of the rest. Tub is very nice. Some rust bubbles in the rockers and back sill showing. I’ve yet to decide on what to do with the tub. Most likely it will all go to people here unless I get a title for it. There is so much motor, trans, tcase, and other stuff missing it couldn’t be saved for a resto. But frame axles ect seem to be in good shape. I’ll power wash it when I get it and get a better picture of what to do with it.

Also anyone is free to send me offers on anything on eBay. I can just end it and sell it here. I normally have stuff listed on both just need to catch up.

MIKKELSEN said:
Also anyone is free to send me offers on anything on eBay.
Click to expand...


I love that stamped bezel, but honestly I had no idea that it could fetch what you've got it listed for. Could it really? It is nice, all patina and all!

Thank you for the reply. Please do keep us posted on the vin.

Yeah someone had a painted one listed for $1000. Could have been a repop too. Listing never specified. They took best offer but I’m guessing it was at least close to the buy it now. And after I saw a Vader light sell for $325 I figured might as well give it a shot.
M

Old Red said:
Thank you for the reply. Please do keep us posted on the vin.

Yeah I was bummed when the original drivetrain was swapped. It killed my plan of bringing it back.
O

The original drivetrain missing can be overcome, cosmetically.

The thing about 1961 FJ40s is this: Assuming it is true that only 249 total Land Cruisers were imported to the U.S. to begin with, how many people today are lucky enough to even have the opportunity to purchase a single one of those 57-years later?

MIKKELSEN said:
The running boards will go to Oregon fj if he still wants them...
Click to expand...

What is it worth?