Well this snuck up on me quickly!

I bought the truck in June of 2000.
It's the first (and only) vehicle I have ever financed.

When I got it, it was mostly stock, but it had a 2" lift from some BIG-A@#$ add a leafs and some 2.5" long extended shackles. It was running some 33" Remington Mud Brutes that were nearly bald. It also had a soft top. Little did I know what I was in for!

A few months after purchase, I bought a hard top on E-bay. I had had a few issues with blown heater hoses, and other General MAintenance items. When I got the hard top, I was speaking with the person I had bought it from, and he was telling me I needed a valve adjustment. So I got the truck home, and pulled the valve cover, and I Found no oil in the head.

I made the decision to pull the head, and what I found was that the head gasket was installed upside down. Further more the cylinders were rough, and the engine was in need of a rebuild.

The engine came out, and I had it rebuilt.

The engine was rebuilt by a machine shop that was WELL versed in F and 2F motors. Cruiser Outfitters used the shop and I figured it was good enough for me! The motor was punched out .030 and a rv cam was installed. Oiling system was upgraded and the head was decked a bit.

After the motor was rebuilt, I had Jim C rebuild the carb, and I installed a non-USA distributor. THe PO had installed a Man-A-Fre header and I Decided to keep it.

I've done a number of other upgrades to the truck.

This Land Cruiser is my daily driver. IT's also the only vehicle I own.
I drive it to and from work every day. I drive it to the trail heads.

It isn't the prettiest truck in the world, but it's mine, and I love driving it every day.

In the future, I will be installing a dual redundant air system, and a front locker. I plan on doing a spring over this winter.

Here are some Pics: 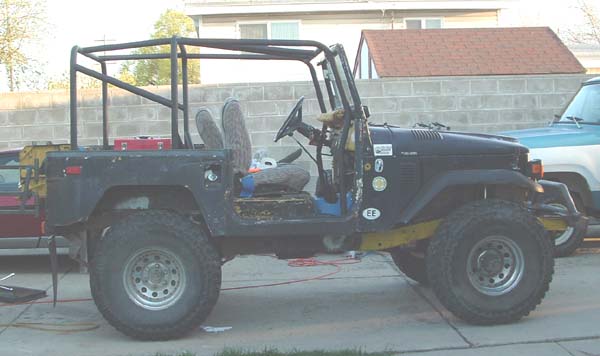 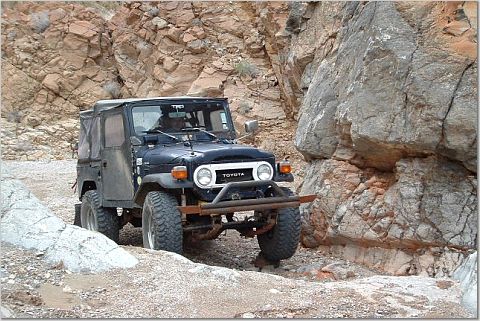 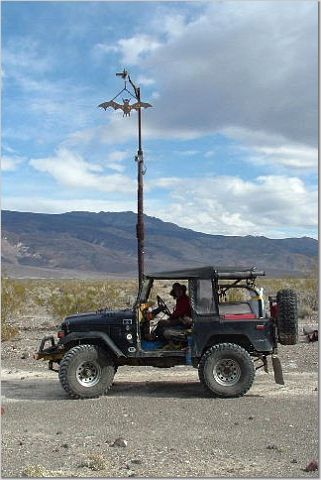 sweet rig, did ya put the roll cage in yourself?

74fj40 said:
sweet rig, did ya put the roll cage in yourself?
Click to expand...

beauty is in the eye of the beholder. beautiful rig, no dought

L O V E the priscope! or is it an anti tip over doo-hicky(pic3) James...You are a braver man than I, I didnt even consider doing the ROTW.
Have fun

Looks like you enjoy your ride and make good use of it!! Keep on rollin!

Ya know, I see alot of rigs on a weekly basis, some amaze me that they made it over. I must admit I thought that of this truck when James used to come down to Cruiser Outfitters back in the day (I say back in the day because I was just a shop grunt at the time). But hell, he has been driving this thing all over the state, California, Moab, Hole in the Rock, etc... and the thing keeps on ticking... I may joke about the yellow frame and tigerstripe dash, but it is a solid truck.

Keep on keeping on James (PS and bring over a credit card, we can clean her up for you! )

How can you possibly be the ROTW and not post a pic of the tiger striped fur on you dash? It is your forum name afterall. Stand proud.
dmc

dmc said:
How can you possibly be the ROTW and not post a pic of the tiger striped fur on you dash? It is your forum name afterall. Stand proud.
dmc
Click to expand...

Here are the tiger stripes
The seats are different now, though.
Will get pics of the seats and the UltraBeef Steering tonight
Last edited: Feb 1, 2006

Now that is what i'm talking about.

I'm sorry, it was just too easy to pass up. For those that don't know James, his rig has been flopped over twice.

I'm sorry, it was just too easy to pass up. For those that don't know James, his rig has been flopped over twice.
Click to expand...

And I will probably flop it a few more times too!!!

ah ha i knew i seen that rig before, up AF canyon. let me know when you do spring over ill help.

Those pictures posted by Dianna sure don't look like any of the canyouns I've seen in Ohio!

So where and what in the hell is that bat thing at?

Those are the biggest maybe even the only mudflaps I've seen on a 40.

HawkDriver said:
Those are the biggest maybe even the only mudflaps I've seen on a 40.
Click to expand...

Oh no you di-nt.....
https://forum.ih8mud.com/showthread.php?t=38943&highlight=poser+pic
About the bat...I will lest James tell about that, Could be a cave or su-um

Other Master cylinders for ‘76