Decided to fiddle this morning before work. Looks like I might have to trim my spacers down a bit. Hood clearance with the intake manifold on will be super tight as it's sitting. Luckily I have a fair amout of room to work with still, but the genV truck manifolds are pretty tall. I need to find out if the express van manifold is any shorter, as id love to be able to keep the oil pan clearance I have.
'93 FZJ-80, hybrid cage, DIY longarms, gears, expensive axleshafts, shiny shocks, armor, 40's.
'87 4Runner, garage queen.
'97 4Runner, V6 5-speed DD
'15 4Runner TEP, big Bilstein's, 285/70-17's, dune cruiser.

Starting to take shape. I actually did decide to take a day and pressure wash the 27lbs of rust prevention coating the underside, and paint the framerails and lower engine bay. Must admit, it's nice being able to stick my hand in the engine compartment and not have it come out covered in crud. 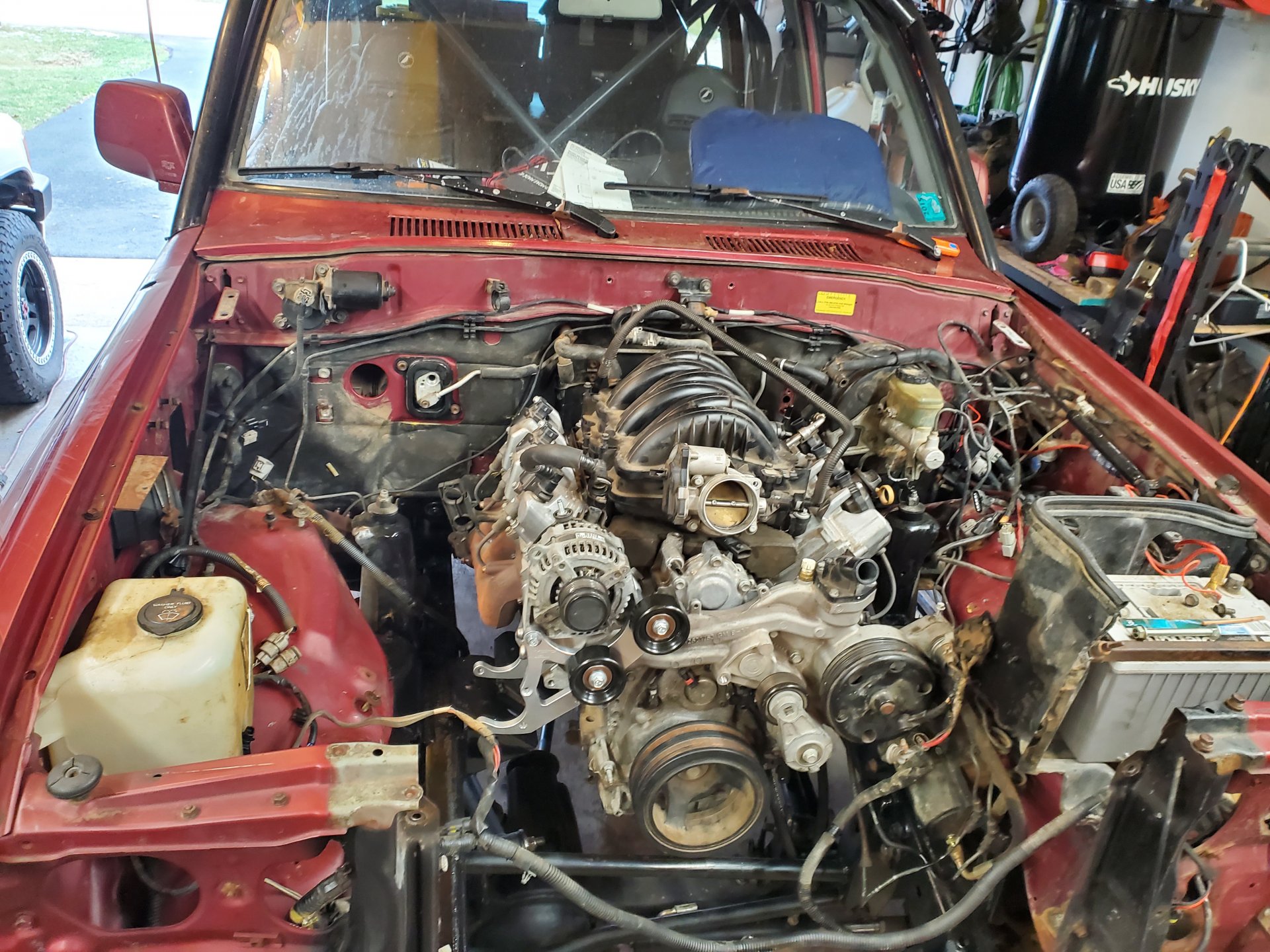 Was able to re-use the factory motor mounts. Ended up setting the motor appropriately 7/8" offset to the driver side to ensure oil pan clearance. Things will still be tight, but it should clear without issue. To offset it, I used a 1 1/8" spacer on the passenger side, and a 5/8" spacer on the driver side. Both are simply welded to the clamshell and a 1/4" plate I cut out and drilled for the motor side.

Transfer case ended up only 1 1/2" forward of factory, I could have pushed it back a little further, but positioning the motor here let's me leave the passenger side manifold completely stock, and I will only have to cut up the driver side to make it work. Plenty of room to add a turbo in the future if 300hp isn't enough. 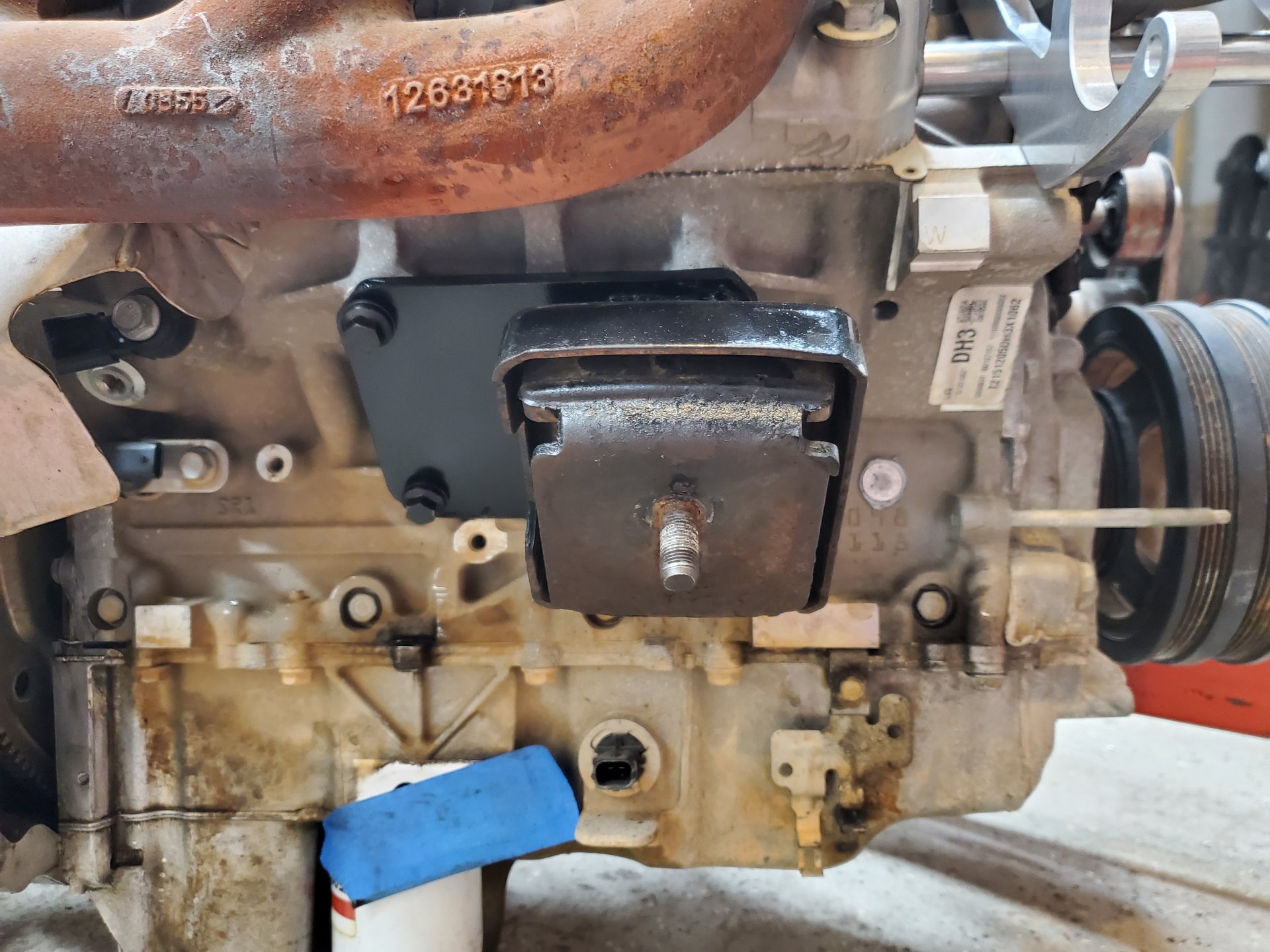 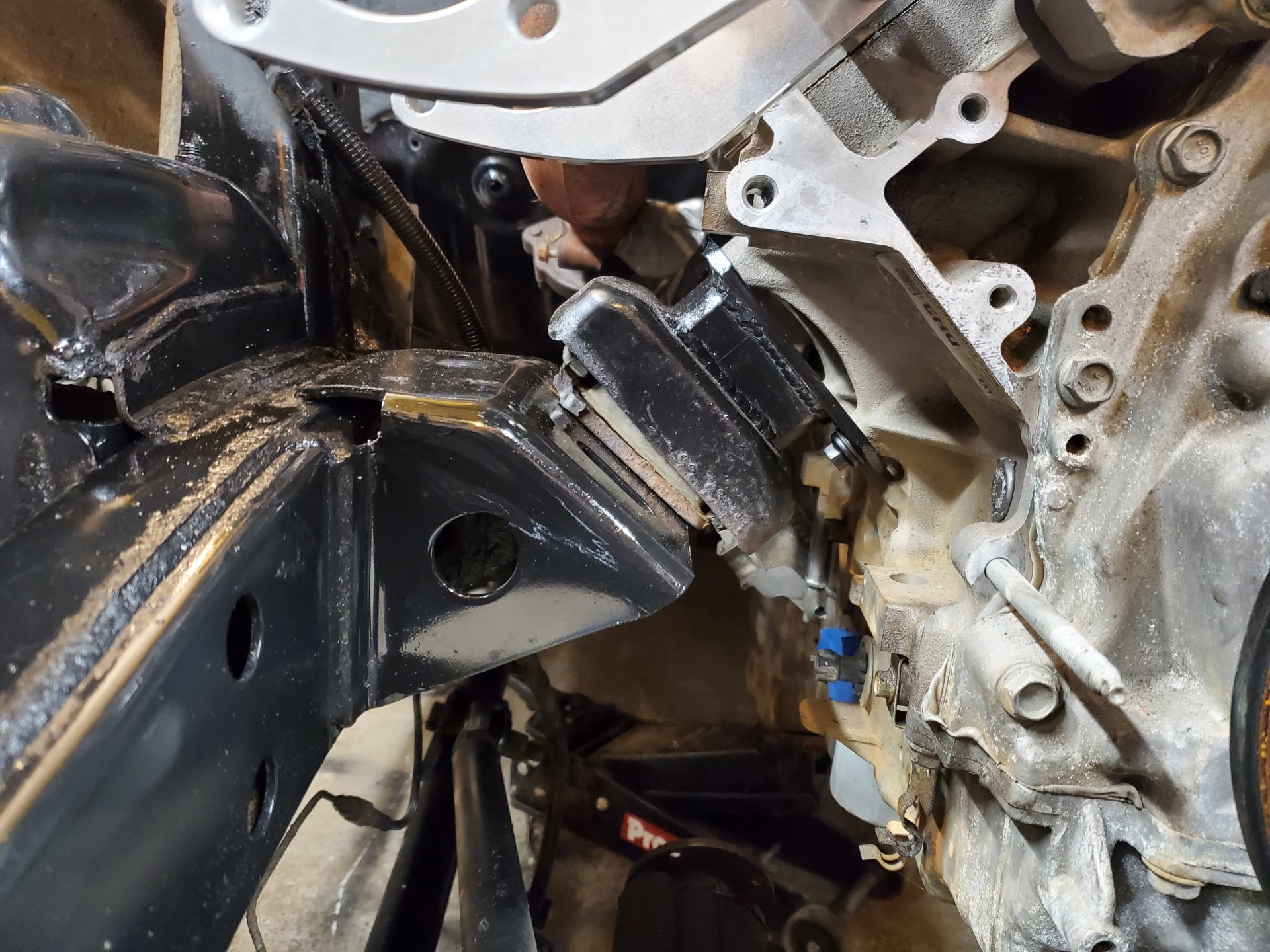 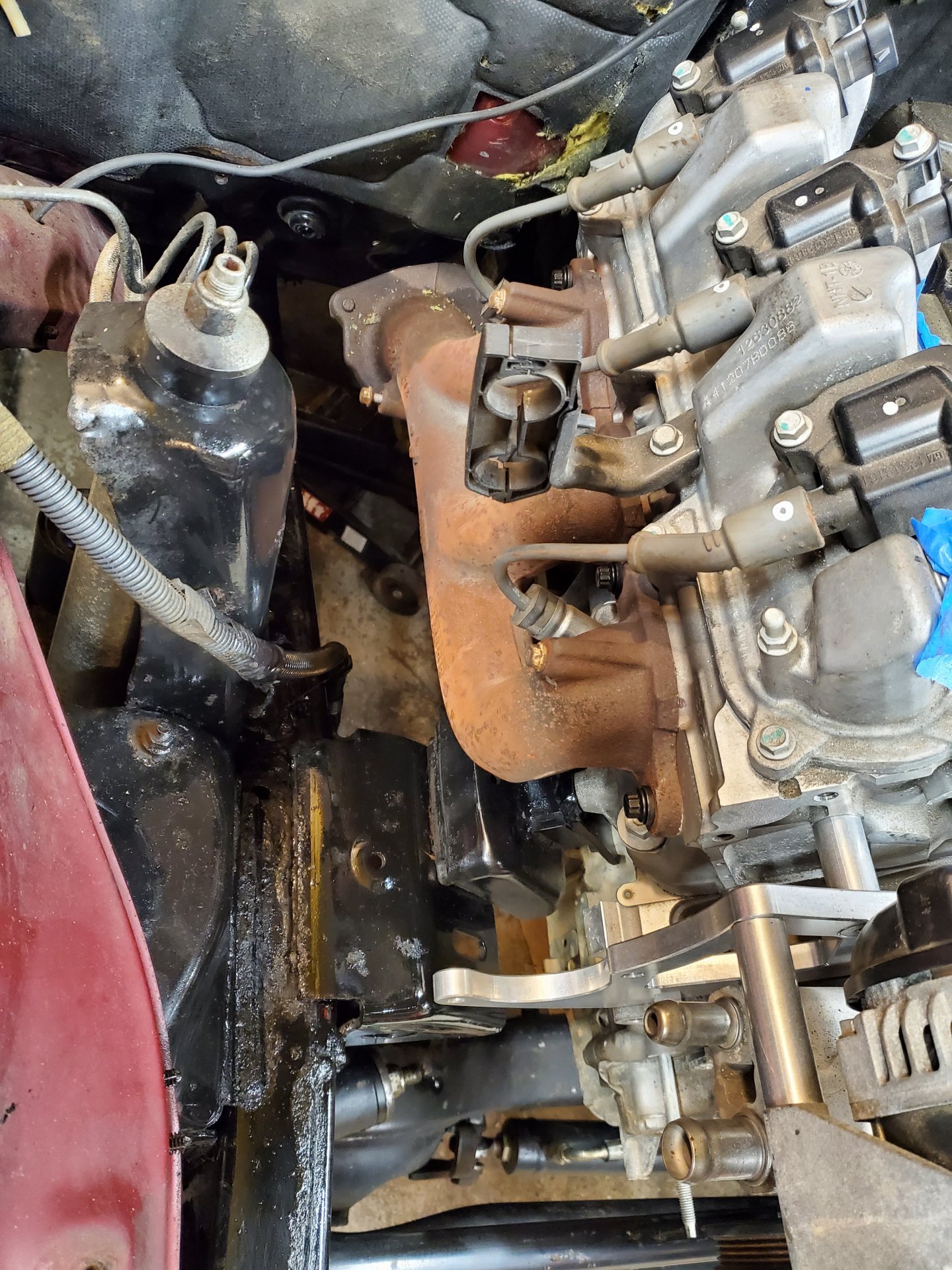 Really really cool so far. Any updates? I'd bet you can cut/weld those manifolds if you want to put more of a universal style flange or V-band on them or make them fit fit better, I do it all the time on the OEM LS manifolds. They look perfect to flip forwards for a forward facing turbo hot-side, are they reversible like the LS stuff is?
CruiserMatt's Off-Road and Performance - Powertrain Conversions, OEM Maintenance and Repair, and Conversion solutions

Admittedly once it started to feel like my harness will be delayed, I slowed down. Now that it's confirmed that I won't have it in time to make California in May, we are rescheduling the trip and I shifted to fixing other things. Plus, just been busy on weekends with family stuff. Lots of spring birthdays, including my wife and daughter.

@jcardona1 inspired me to completely replace all hard brake lines. Swapped everything out, and simplified the entire setup. Ran a T onto the front axle, and dropped one single soft line to each axle.

-Decided against using the Silverado fuel pump setup, I installed an aeromotive pump into the stock sending unit instead. New tank mounts and pads ordered from Toyota, worthy investment even though my tank and skid are both smashed to bits.

@cruisermatt I did indeed chop up the stock driver manifold and used some cast steel schedule 40 elbows to re route, and for now I'm running the stock flanges. Makes it pretty easy to build off of for now. And yes, I can flip the manifolds and add a hair dryer if 300hp isn't enough

-After lots of CAD (cardboard aided design), finally settled on a center console design. I ended up settling on a 2013 Chevrolet Malibu shifter, with a Trailblazer shifter cable. I also ordered a second cable shifter, instead of using the original tcase shifter, I'll be using the NWF cable shifters to shift both my Tcase and my Black Box. This was yesterday, next up is to transfer to steel. Yes it's huge, ane yes it's still surprisingly comfy.

Definitely still have lots of work to do, now that I am past all of the birthdays, I can get back after It and get things moving again. 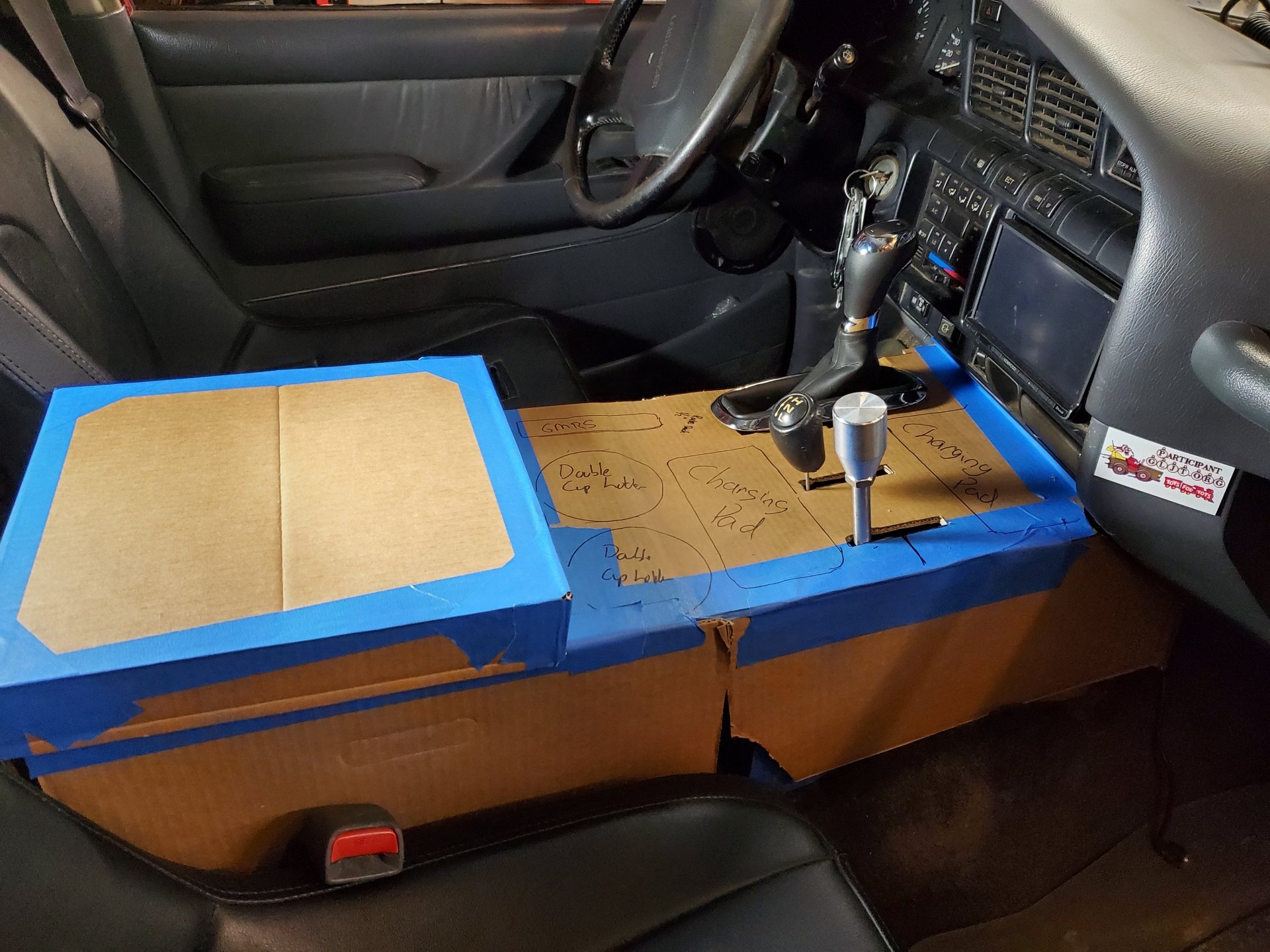 joez said:
Man I wish. I'll just say three things. I still don't have the harness, I don't know how USPS still exists with how embarrassingly atrocious they are at doing the single thing they are responsible for, and the covid excuse has run its course for me.
Click to expand...

I know right. Harness is here and installed, but still missing a key module that I need to run it. It has fluids, but still needs final plumbing and wiring. Kinda been a bit frustrated with all of the covid delays and excuses for some key parts and haven't messed with it much.
'93 FZJ-80, hybrid cage, DIY longarms, gears, expensive axleshafts, shiny shocks, armor, 40's.
'87 4Runner, garage queen.
'97 4Runner, V6 5-speed DD
'15 4Runner TEP, big Bilstein's, 285/70-17's, dune cruiser.

joez said:
I know right. Harness is here and installed, but still missing a key module that I need to run it. It has fluids, but still needs final plumbing and wiring. Kinda been a bit frustrated with all of the covid delays and excuses for some key parts and haven't messed with it much.
Click to expand...

I'm down to a single pulley and the muscle car module needed. Module was supposed to be delivered the last week of June, its August and nothing. I can fire the motor up without it, but I need it to drive it.

I just read the whole 10 pages and well done sir! more inspiration for the fire road bomber i bought that i swore would not turn into a project like it already has.
91 fj80 37's /5.29's/ ARB/Detroit/ 4 colors- the offroad station wagon-

So, a bit of a non update update. I am still in parts purgatory unfortunately with my muscle car module. I've tried to refrain from any naming of companies, or bashing, but Mitch from Swap Time has now told me 4 times that the module is shipping "next week", and fails to provide tracking or the product. So, at this point I'm saying I'm out the money since it was bought 7 months ago, and am shopping for alternatives that can mimic the BCM without actually running a BCM or harness.

If it shows up, awesome, if not, I'm on the hunt for another solution, and think I may have found one in the jeep world, go figure.

For a teaser, here's how high its sitting with the weight reduction, and almost fully assembled. Once it gets to the exhaust shop I'll see if I can drop the nose a little. 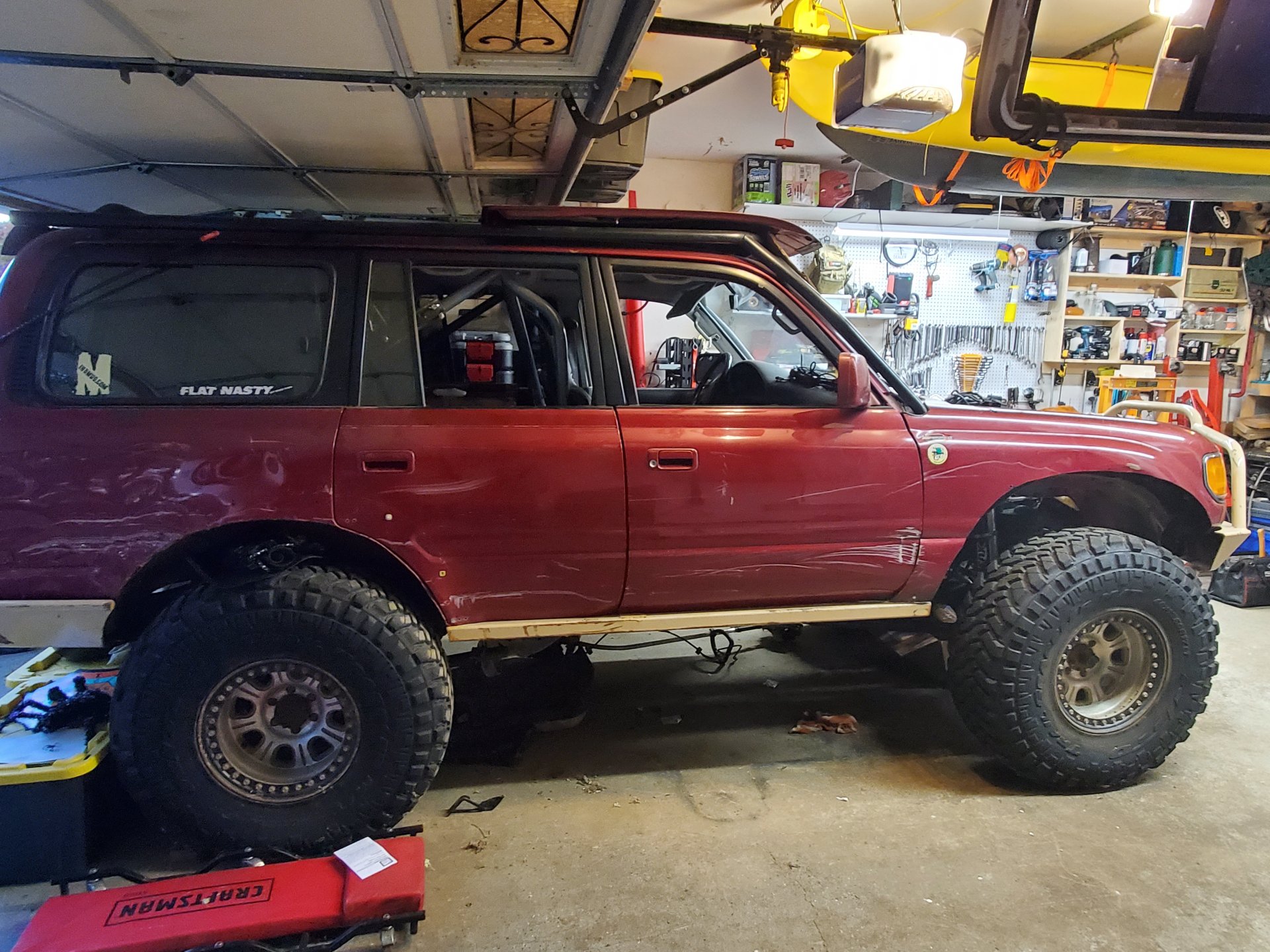 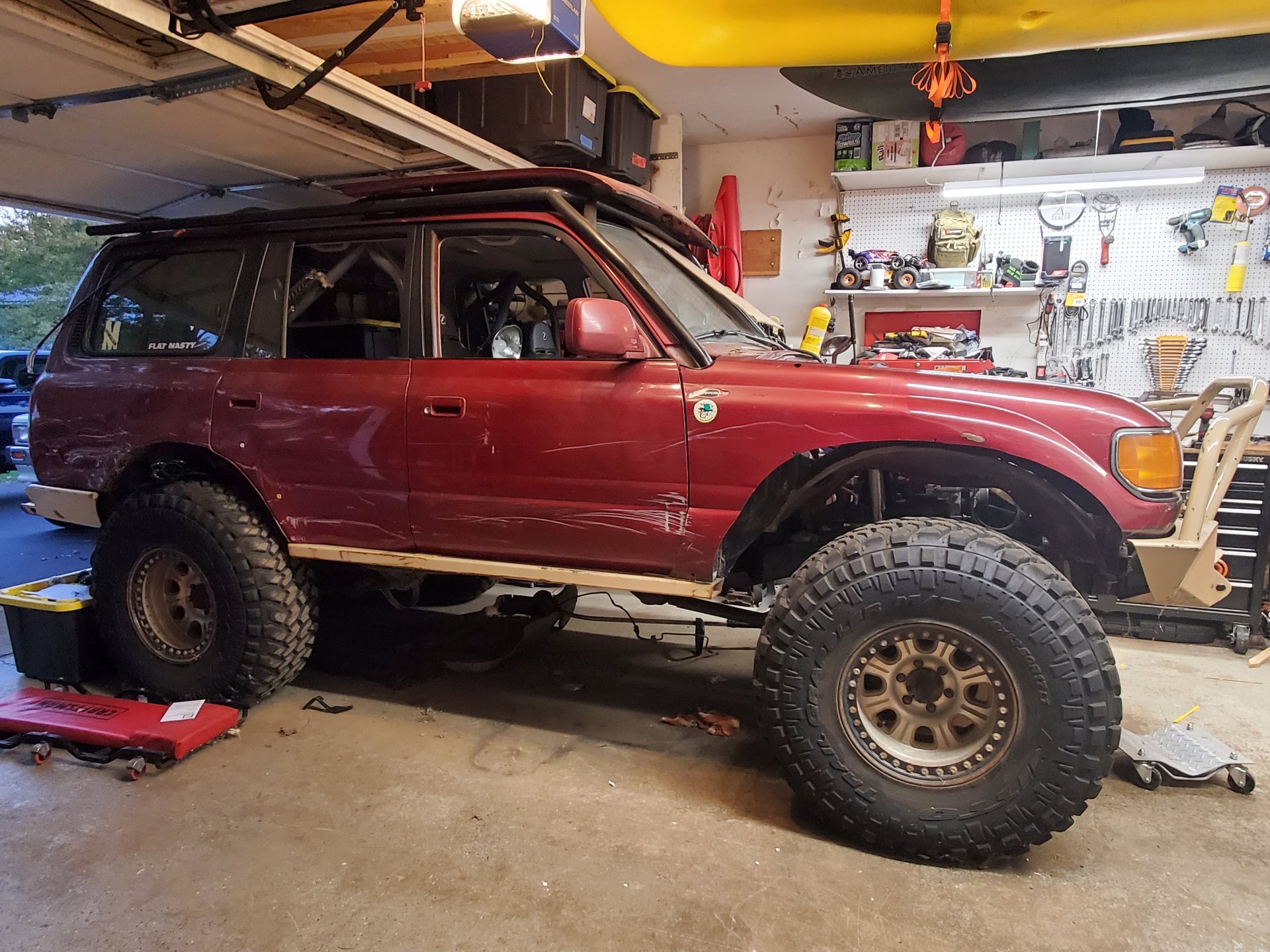 Do the best you can with what you have...

GW Nugget said:
Almost there Eh? It will be a great time when done with a lot of smiles per mile.
Is that a regular 7 foot garage door? Your on fully aired up 40s ?
Click to expand...

Yup, standard 7' door, and normal street pressure in the tires.

It's getting very close to heading to the exhaust shop, I can't wait to get it back on the road. Seeing it as nothing but a garage ornament has been painful this year. Thankfully we have other things to wheel, a week in western colorado with the 5th Gen 4runner helped keep me sane this year.
'93 FZJ-80, hybrid cage, DIY longarms, gears, expensive axleshafts, shiny shocks, armor, 40's.
'87 4Runner, garage queen.
'97 4Runner, V6 5-speed DD
'15 4Runner TEP, big Bilstein's, 285/70-17's, dune cruiser.

Alright, back to it! 2022 is off to a good start over 2021, it's time to finish this pile of crap and get it back out on the trail. Never got into it, but now that we appear to be in the clear I'll touch on a different delay we had. During our Colorado trip my wife had a bit of a cardiac episode, and not long after that a cancer scare, both of which delayed another surgery she had scheduled until she was cleared. 6 months later We have a 100% clean bill of health, and she just had her other surgery and is recovering on point. Since life is short, we splurged and took the kiddo to Disney for a week, the wife and I went to the Keys for a wedding and to get away, and tried to spend a lot of time with family that we don't see often enough through the rest of the holidays.

During all of that time, Mitch somewhat came through from SwapTime. I got my module, and although it is not set up exactly as it was supposed to be, I'll deal with it. Several other parts delivered that I didn't know I needed, and this weekend I was actually able to get the garage picked up, the garbage that had piled around the bigger piece of garbage addressed, and started burning some metal again. While watching KOH of course, which is always a great motivator.

I have a trip scheduled in April, and that's my target to get this thing done and shaken down by.

Changed my pedal up from a stock truck to a CTS-v pedal, that fits much better. I'm trying to use the stock Obd2 airbox lid for my swap, but things are getting tight trying to fit the psc reservoir over there with it. It's temp mounted to the fender, but once I get plumbing finished I'll see if I can move it closer and mount it to the engine. Working on coolant and heater plumbing now, and mounting the ECM.

Center console is progressing, the front half is framed, shifters laid out, and 66% hooked up. Need to finish my bracket and connect the cable shifter to the tcase. 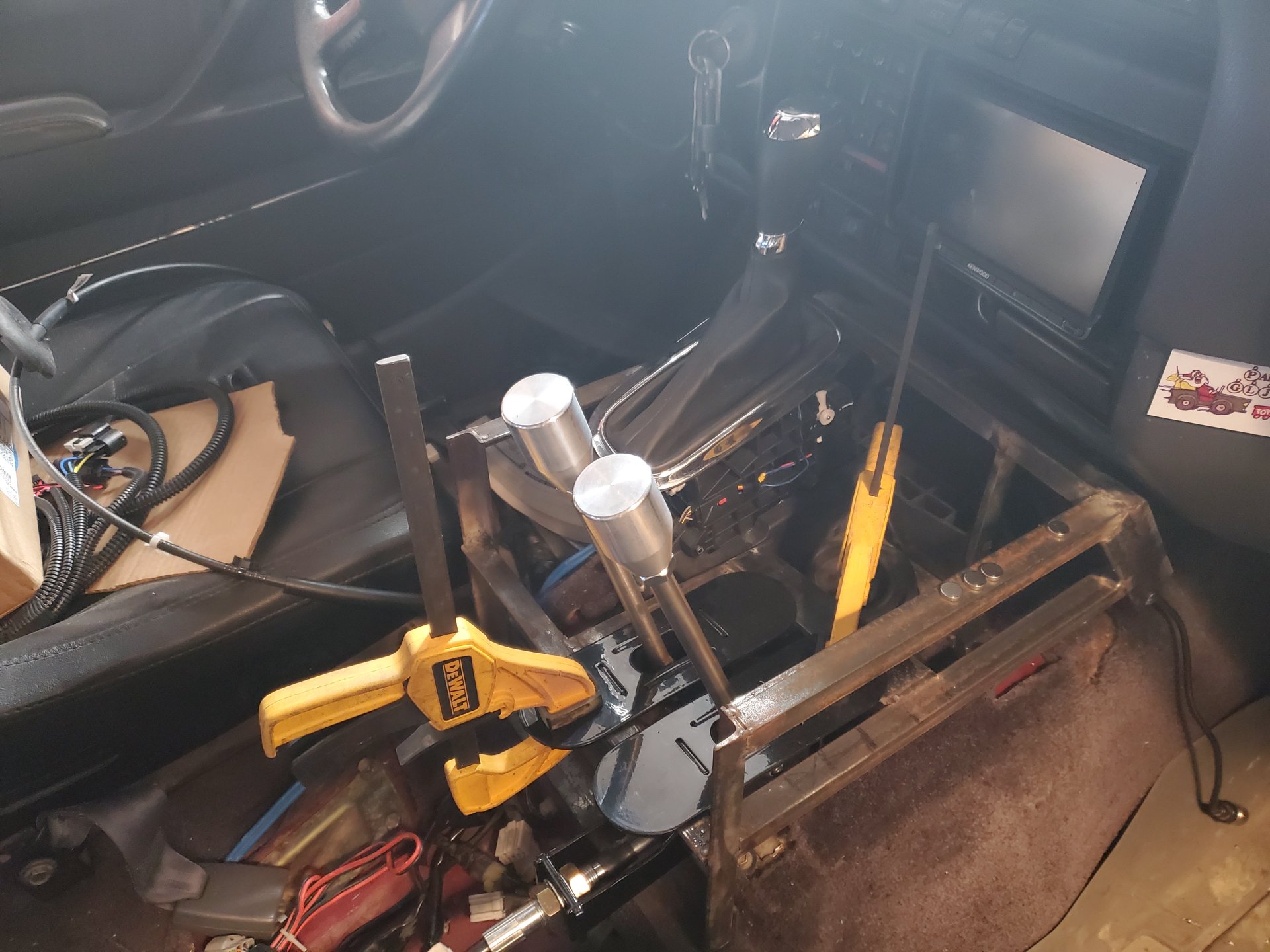 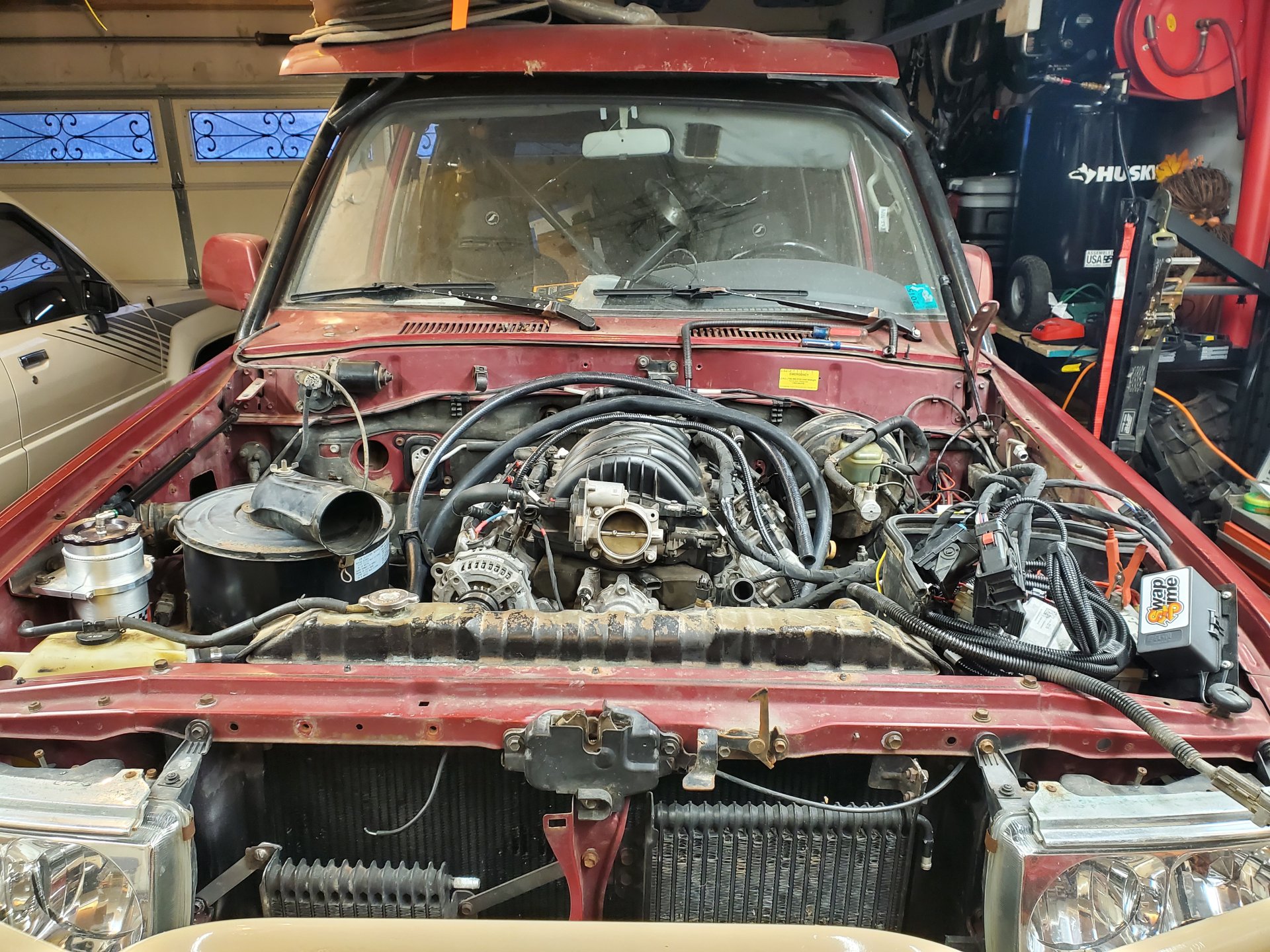 Happy to hear all is well with the family!!