Completely new person to FJ40’s here, and also a noob on the site (read a lot but just joined). So I hope I’m in the right place and apologize if I am not.

I have wanted an FJ40 since I was a teenager. I am in my forties now and am now looking to finally buy one. Trying to go with a cheap fixer upper that is already road worthy and drivable for my first.

I have found this one and have been talking with the owner and it seems solid. He has sent videos of starting it up and of it running, he has also sent multiple pictures of the underside. I have shown it to a cousin that is a mechanic and he seems to think it looks ok from what he can tell.

There seems to be a little bit of rust, but not bad. Also, it had been used as a plow at some point in its past. Owner says it starts and runs fine.

It is two states over, so I am unable to test drive it or go look at it.

Also, this maybe a stupid question, but I thought I had read that the big single door in the back (not the ambulance doors) was a South American thing, and that some South American FJ’s may not be able to take the top off (something I definitely want to be able to do). Is there any truth to that?

Any suggestions or information would be appreciated.

Sort by date Sort by votes

Welcome to Mud.
There seems to be some weird things going on there. What year are they saying it is? Does it have a rear hatch and two small doors on the back? I don’t know what’s going on with the front door handles.
If the price is cheap it might be worth it, but personally I’d keep looking. I looked at a lot of crappy trucks before I found mine.
Upvote 0 Downvote

You are in the right place. What year does the owner say it is? For one… it’s been painted. Over everything!! So no saying what has rust and what doesn’t! The rear door indicates it’s an early (pre 75) cruiser, not South American. But it still could be. There’s not enough info for me to id. But others might.The surface rust on the bottom looks fine. We would need a little more info and pictures.
Upvote 0 Downvote

If I was you, I would lurk on Mud some more. Go through some build threads. See what issues people faced because they bought rigs at various stages of disrepair. Be honest about your skills and budget. This could go south quick. Read up.
Upvote 0 Downvote

More pictures are always good to look at. But cant really ever tell what's going on without looking in person. Looking st the cab picture I think they bolted the passenger seat to the lower frame of the original 60/40 bench seat... but what do I know might find alot of homebrewed budget fixes on it, but if it works it works right? Are you looking for a toy? Or a restoration project? I think your end goal should guide your purchase decision
Upvote 0 Downvote
M

Thanks for the quick response fellas. He is saying it is a 1971. He mentions that it has a “terrible brushed on paint” job in his description. He is asking $9500. I will try to put a couple more pics (I think I’m only allowed 5 pics, but I will try. And I’m mainly looking for a toy. No major restoration. I will put a bit of money into it, and work on it a bit, but i doubt whatever I buy will ever be auction worthy. Thats why I want to be able to take the top off and cruise. 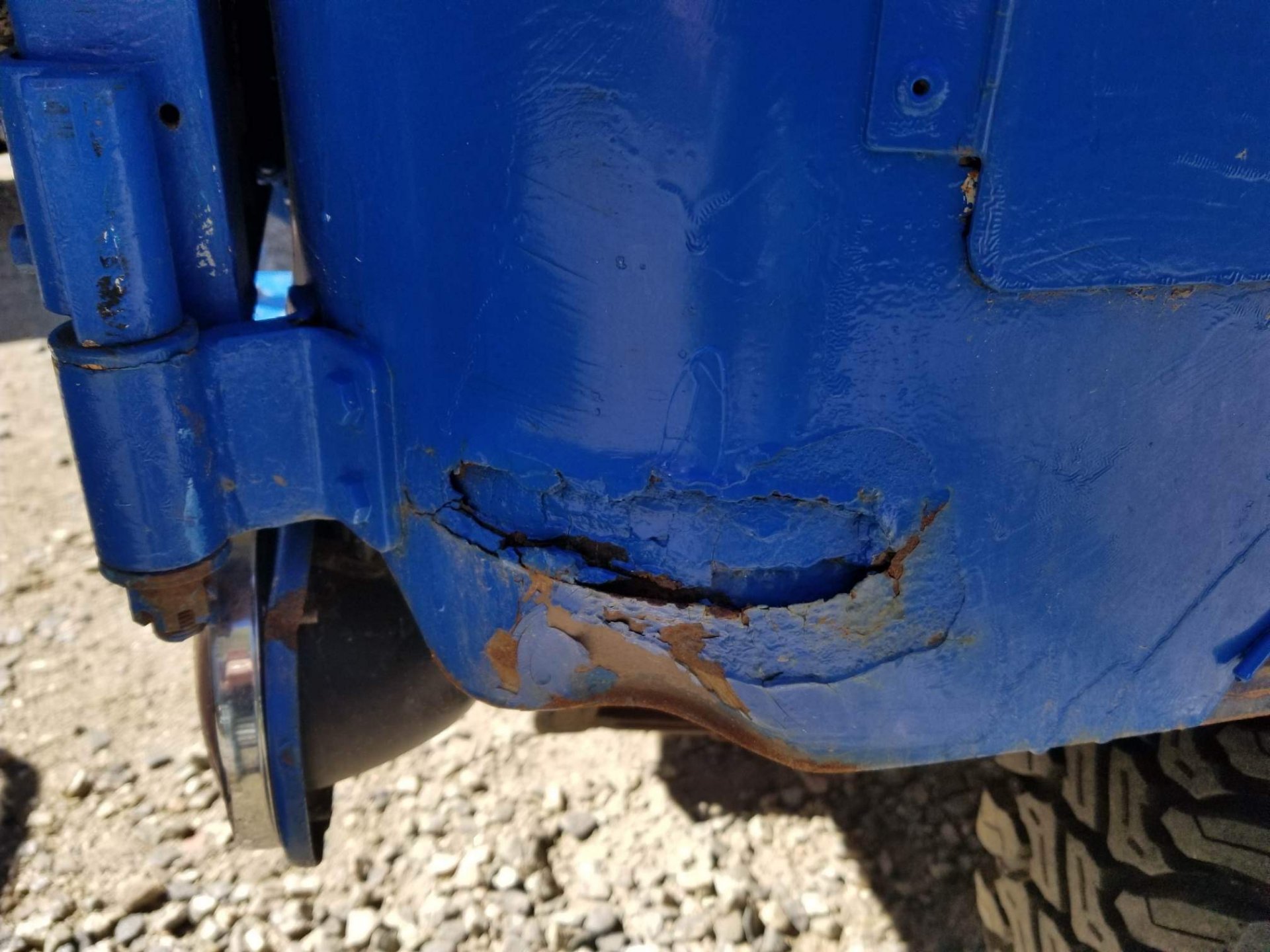 Heck. If you want a toy. For that price, give it a go! Ha!
Upvote 0 Downvote

you could always sell the plow set up for coin $$

it’s got decent rubber on it

not sure what the rib in the back of the tub is, behind the seats?


you best go look in person, and take your cousin with you.
Upvote 1 Downvote

So... I'm inclined to ask. If you buy it do you need that plow? I see aspins in the photos and imma about to move out west and kinda want a plow ? Lol no need to pay me any mind. I'm just day dreaming
Upvote 0 Downvote
M

American Outlaw, I don’t need the plow. If I purchase the FJ I will be wanting to get rid of it.
Upvote 0 Downvote

One thing it has going is that it does look pretty complete. There’s some extra wiring, likely for the plow and extra hood lights, but doesn’t look all hacked up. I don’t think it’s a South American, that looks to be correct top for a 71 hardtop. I also noticed; where’s the door handles? Doesn’t look like the catches for the doors are present either. There is definitely rust. The rear sill is probably gone if the quarter-corners are that rusty and who knows what’s under the rest of the paint. At that point, and “brushed on” paint everywhere, this could easily and quickly become a rabbit hole. Start with fixing a little rust and next thing you know it’s a full restoration. Like said, just be honest with yourself about intended use, skill and budget. I would think in the $10-15k range, you should be able to find a very roadworthy rig that only needs minor tinkering. To me, the same rig in original paint would be way more appealing than poorly painted over.
Upvote 1 Downvote

All great advice above.
I tell you this since you said you have never owned or drove one before. The top removal on 40's is a pain in the arse.
Not bad if you only do it occasionally but if you plan to be taking the top on and off multiples times in a year, be ready for it, such as a solid mechanical way to do it or trustworthy additional people to help. My 2 cents.
Good luck in your search, do not get impatient, wait for the right one and don't be afraid to ask questions here.
Upvote 1 Downvote

FJ40’s are getting to be pretty old and a lot of parts are not currently available new. This may change for the better in the near future as Toyota has announced that they will restart production on some parts but they aren’t available yet.

So how knowledgeable are you about car repairs in general? I consider myself a second time newbie because although I have owned 4 Landcruisers I sold the last one before my current 76 in 1993 or 94, so it’s been 27 or so years since I owned and worked on one. And realistically, I didn’t work on any of the cars I’ve owned since 1994 very much so I was relearning a lot of things that I used to know how to do.

I bought my FJ40 specialty because I DON’T have to drive it. So if gas goes way up I can cut down on my driving or if something breaks and it will take a while to fix I’m not in trouble because I need the Cruiser as a day to day vehicle. Depending on the initial price and your comfort level with learning or relearning or just paying someone else to fix it it can be fun to have a project. But probably not cheap. I would look at more than one or two before buying and definitely look at the forums and projects that people post here to get an idea about problems and solutions that you are likely to run into.

Good luck with whatever you decide or get!
Upvote 0 Downvote

Is that a fold down tailgate and chains? Look up how much those go for haha.

Floor shift (3 speed Im assuming) with the vac shift transfer case. Floors look better than mine, but thats not saying much.
Upvote 0 Downvote

Mak76 said:
American Outlaw, I don’t need the plow. If I purchase the FJ I will be wanting to get rid of it.
Click to expand...

A few people have mentioned the doors. In the description he says “hard top, soft doors” (if that helps.

I’ve been looking a while for a suitable FJ and it seems like anything that is running that doesn’t have a ton of rust is close to $20,000.00 or above (many say things like it turns over, but hasn’t run in years, and they still want $8000-9000 for it). I was hoping to get in cheaper, and throw some money at it here and there. We have a three other cars so I won’t be relying on whatever I buy. I lost out on a 1969 about a months ago that ran and was near my house, but needed some body work.

As for removing the top, I was hoping to do it only a couple times a year. Remove it at beginning of summer and leave it off til it got cold, then put it back on. Probably keep it in the garage, and drive it to do errands, go to work, and take the family and dog to the park and stuff.

As for mechanical abilities, they are ok. I have family members that are mechanics that could help, and I am a firefighter/paramedic. Sometimes after training and if we aren’t running calls we have free time and a lot of guys will tinker with old Jeep’s or whatever. I figured I could also tap them for information and help. They are pretty good. Not to mention the department mechanics have helped me out a few times with vehicle stuff.
Upvote 0 Downvote
M

Yes it is a 3 speed. Looks like it is a fold down tailgate. Is that a good or bad thing?

And I will definitely keep you in mind American Outlaw about the plow.
Upvote 0 Downvote

Looks like a Factory Soft Top (FST) model. The doors look to be original with matching (ugh) paint. If the rust isn't any worse than shown (but probably is), and it's complete (all the small FST bits and soft top bows, it might be worth what he's asking.

Unless you are buying a really expensive FJ40, $50,000 or more, needing some body work is a given. It may not be drastic but if you don’t fix it soon it will probably cost more money when you do. But flat areas are easier to patch than curves. Look really hard at wheel wells and the back tub corners and where the turn signals attach to the front fender and look from both inside and underneath whenever possible. I don’t know how you feel about keeping the engine. Some people pull the F or 2F original Toyota engine and put in a small block Chevy V8. Other than part availability I find the 2F a reliable engine that is usually easier to fix because it’s simple and rugged. Most engine parts have some form of work around if the original part isn’t available but that doesn’t mean it’s an inexpensive change.
Upvote 0 Downvote

Is that a second door for an auxiliary tank?
Upvote 0 Downvote
You must log in or register to reply here.