A few weeks ago my brake pads reached the end of their life. One pad slightly scored the rotor, and since I had nice slotted rotors, I decided to put on a cheap set of pads with the scored rotor while I ordered and waited for a new one to replace it. I expected the scored rotor to make a little noise and for the pad to wear out faster than normal.

I put the pads on exceptionally fast, I think the whole job took about 40 minutes to put new pads, both sides. You can change the pads without even removing the calipers! When I got it together, the scored rotor and fresh pad did make a little bit of noise. I ignored it while I waited for new rotors and ordered up some Hawk Green pads to put on with the new rotors. The rotors were on back order due to manufacturing stoppages (Covid Related). So I waited.

Well... In the meantime the noise continued but really was not bad at all. Until a couple of days ago, when I was on the brakes lightly slowing down from an off ramp on the freeway and a big 'thunk' and a hard pull to the right. The noise had stopped and so had the braking from the front left wheel.

This is what I found: 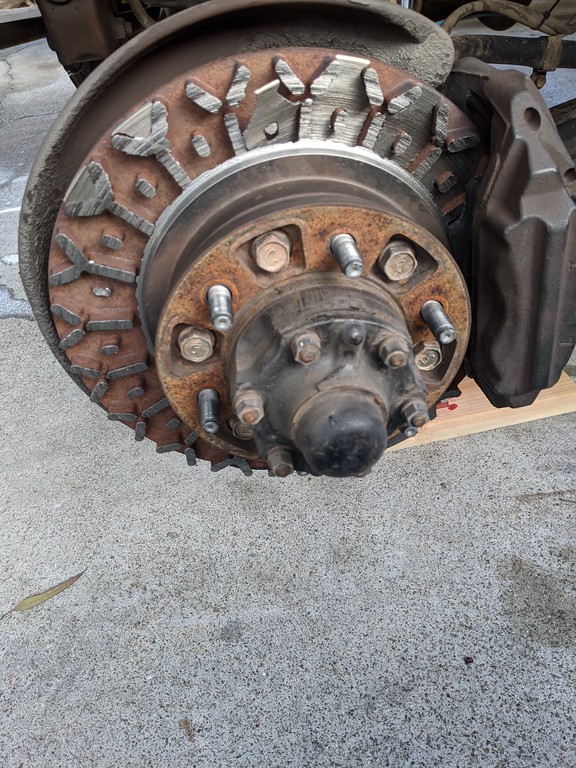 Umm. That's an issue. How did that happen? 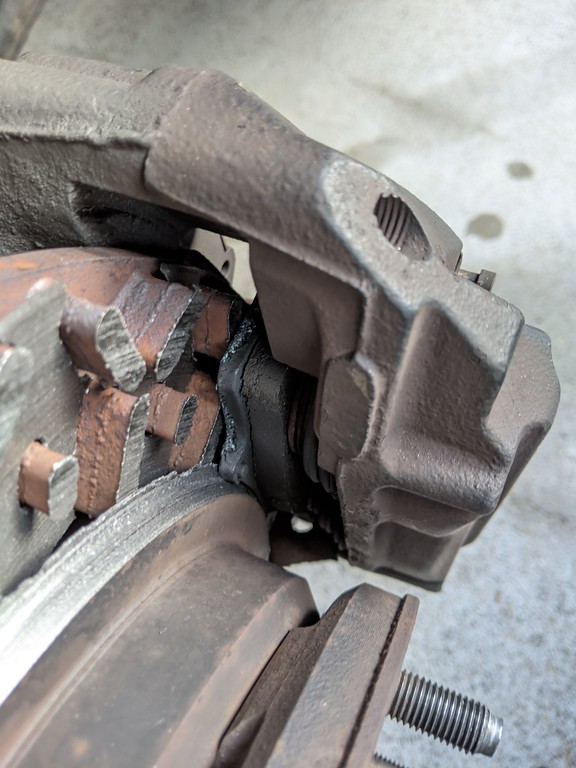 Is that what I think it is? How the hell did that pad get upside down? No way I did that. Huh? What?

OMG. That's the dumbest thing I've ever done working on a vehicle. I've done dozens of brake jobs. I only ignored the noise because I was expecting a bit of noise. In less than 2K miles, half the rotor was gone. 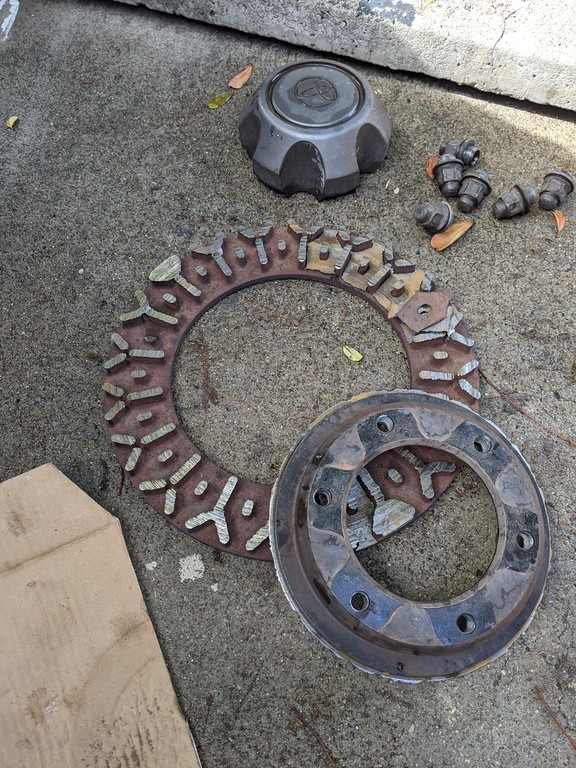 Literally cut the rotor in half with the pad upside down. So... the Moral of the story is, don't run your brake pads up side down.

On another note, I found a good technique for reinstalling that terrible snap ring that goes on the end of the front birf shaft. 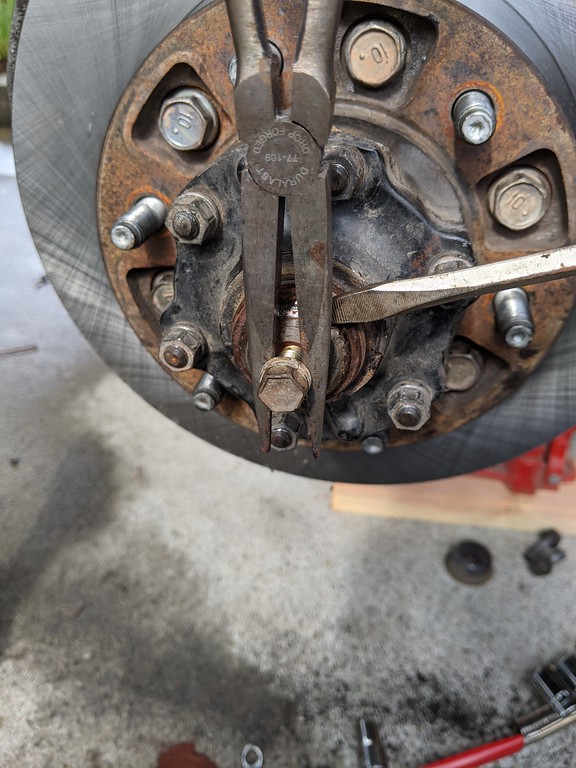 Find a small bolt that fits it, screw it in a ways, put the clip on loosely, then use long nose pliers to grip the bolt, and lever the horrible clip on with a screwdriver. Works like magic.

That’s DOPE! I’d save that for garage wall art.

I bet your mpg suuuuucccckkkked the last 2,000 miles.

I bet your mpg suuuuucccckkkked the last 2,000 miles.
Click to expand...


Actually it was the exact same. It's always the same. 12.5 mpg. It drove and braked normally, except the last day it started making an odd whirring sound when on the brakes and I thought to myself, "I better check that pad to see how it's doing, it sounds weird'.

Everyone has done something unimaginably dumb at least once. I have lost count myself.

I've almost forgotten to tighten the caliper bolts once. That scared me enough to triple check the simple stuff.
But you know, @Railwelder93 is right. as long as you didn't get hurt or hurt someone else, all good.

I have run pads down to the backing plate and the god awful grinding noise they make is terrible. I have no idea how you could have lasted 2k miles like that. And I am actually quite surprised the backing plate looks normal thickness and wore out the rotor without wearing down.

That's pretty damn impressive. That's all I have to say.

lol impressive...thought that pic was a joke at first

scottryana said:
I have run pads down to the backing plate and the god awful grinding noise they make is terrible. I have no idea how you could have lasted 2k miles like that. And I am actually quite surprised the backing plate looks normal thickness and wore out the rotor without wearing down.
Click to expand...


It really never sounded bad at all. But then all I've been able to hear or feel for the past 3 years is the roar and vibration of the terrible, awful Duratracs. All else pales in comparison.

Thanks for sharing. most would be too ashamed, but those are some epic pictures

So basically the brake pad backing surface is like eleventy times harder than rotor iron. Good to know. Going to keep my next set of used brake pads as spacers/pucks for the shop press

Heckraiser said:
Thanks for sharing. most would be too ashamed, but those are some epic pictures

So basically the brake pad backing surface is like eleventy times harder than rotor iron. Good to know. Going to keep my next set of used brake pads as spacers/pucks for the shop press
Click to expand...


I could have turned the pad around and put it in service. It was a little crusty but seemed fine. The pics were worth sharing, I've never seen a rotor that bad before. It's life, we make mistakes sometimes. Don't rush a job just because you've done it a bunch of times, even if it's only temporary!

You should drop it off to get it turned.
K

That's a new definition of "Ventilated Brakes". Amazing that there weren't any sparks, smoke, or flames. Thanks for sharing.

Holy S___! Yes, hidden camera video to ask if either; "Do you guys sell a rotor that looks like this?" or "Can you turn this?"

I know you can install metallic pads on our trucks, but in you're case, you took the meaning of metallic pads to a WHOLE new level.
You must log in or register to reply here.

Replaced one rear rotor - getting a lot of heat now.