After the PO drove the FZJ80 an unknown number of miles with a blown head gasket, the #6 piston looked like this: 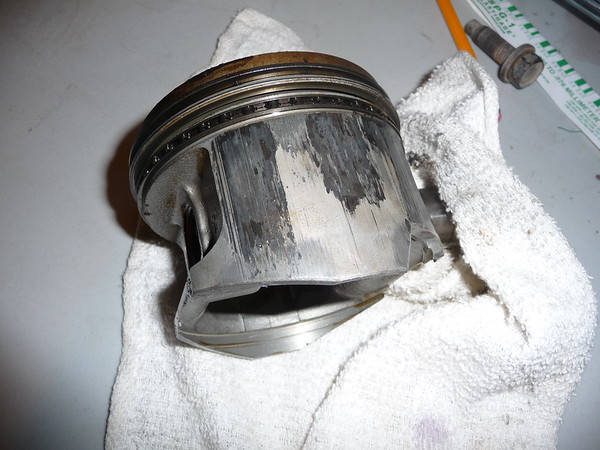 The bore was no better. The head was warped and no compression in #6 cylinder. Chocolate milk oil. I pulled the motor (per my build thread) and am now ready for the rebuild. I'm putting the rebuild here separate in case folks like to see the rebuild itself without all my rig specific stuff.

So, with parts back from the machine shop, it's time to take the next step in getting my cruiser on the road for the first time since I bought it. I have never actually driven a cruiser more than 5 miles when I test drove one that I did not buy because the guy wanted too much money. I used to have an 88 Toyota Pickup 4WD

Work done at the shop included:

This is the block as arrived from the machine shop 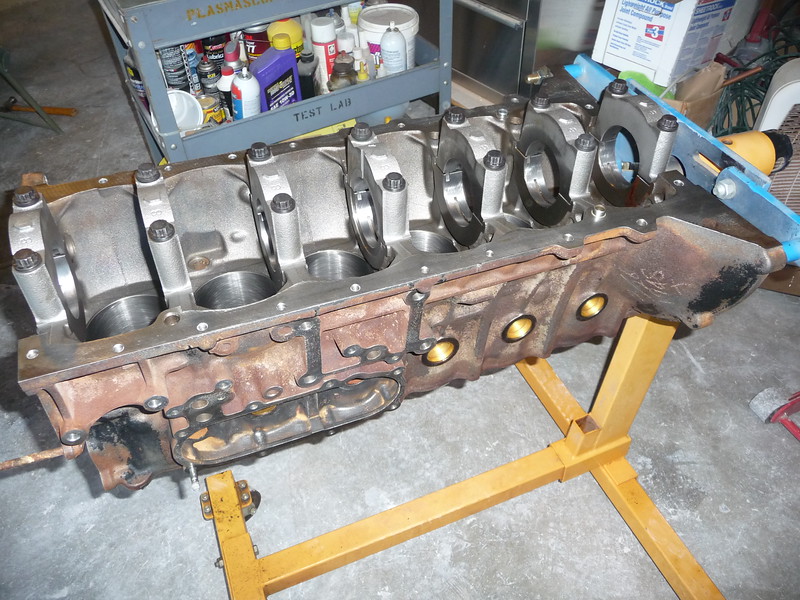 Before I paint it or do anything else, the first step is to test fit the crank and plasti-gage it for correct clearance. Because it was line bored all of the crank bearings are now reset and no longer at factory values so the stampings there don't mean anything. If you don't know what line boring is, they re-drill all of the holes that the crank sit in. The factory setting was out of tolerance .0005". The machinery used for that now is incredibly precise. I follow the FSM procedure for plastigaging. The machinist told me this wasn't necessary, he was confident it was all ready to go but I wanted to do it anyways for my own peace of mind.

To plastigage you install the new bearings and then lay a small piece of plastigage plastic on the bearing surface and tighten the bolt to spec. Then remove the cap and use the gauge to measure the clearance.

The new bearings are 'safety auto' and are made in Japan. They appear to be very high quality. 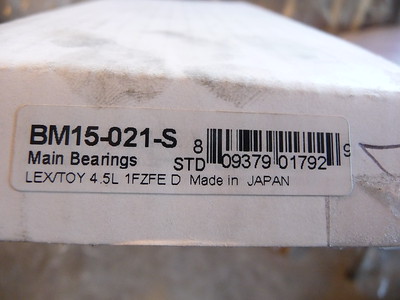 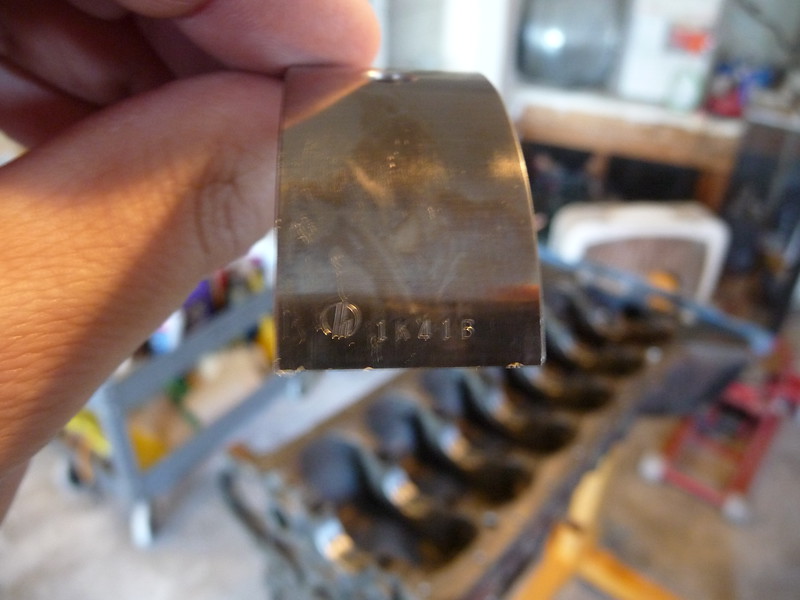 With the lower bearings installed, you place the crank carefully. It weighs about 90 pounds. 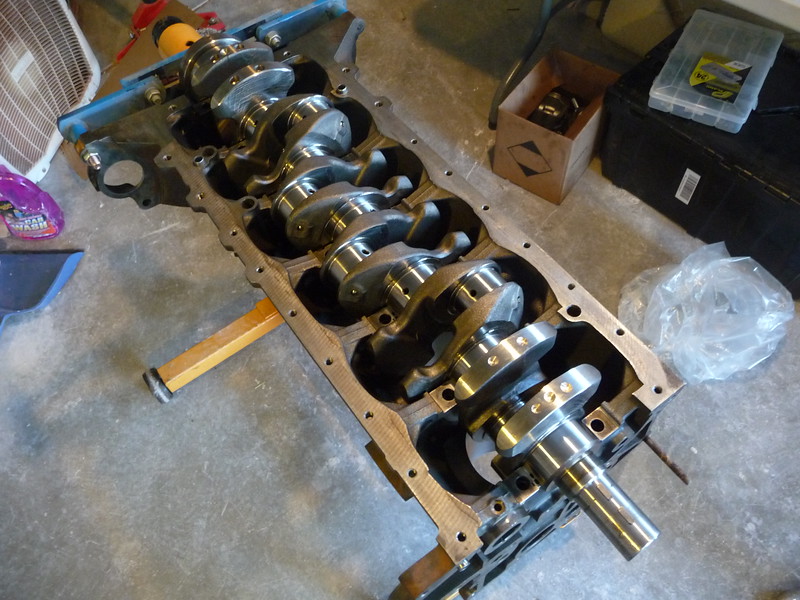 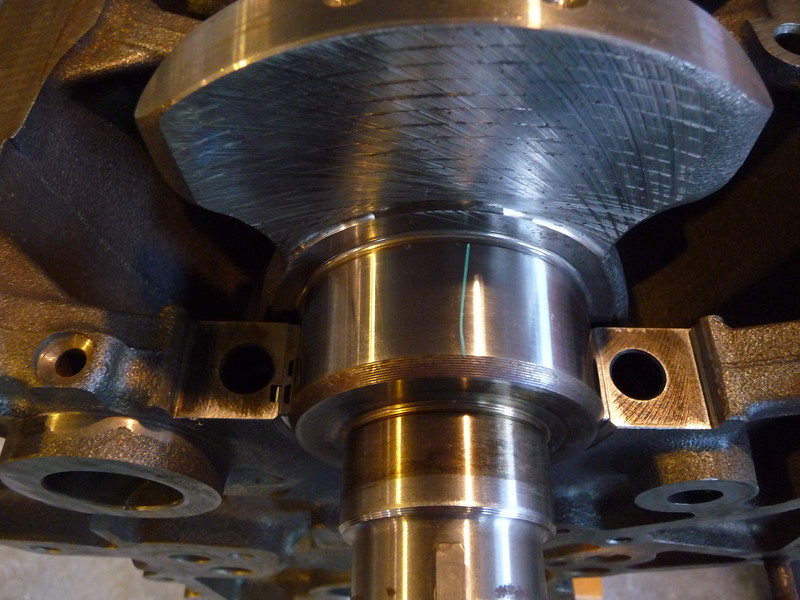 Now the bearing caps are installed and tightened to spec. Then remove them and check the plastigage with the gauge that is included with it. 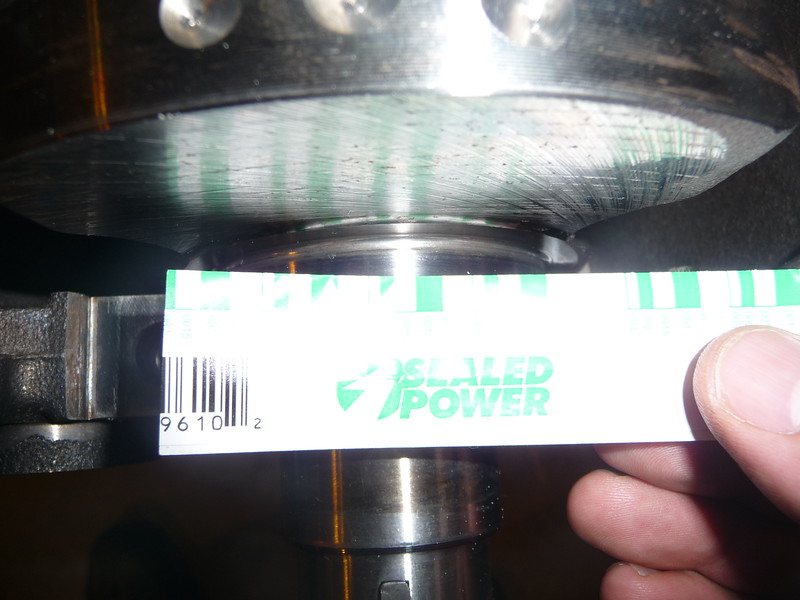 It's really hard to see with the flash, sorry. The tolerance was dead on in every journal. Between .0015 and .0020. Nothing exceeded .0020 and the variance was beyond the ability of the plastigage to measure. I did find one of the new bearings has a scratch I'm not happy with so I'm going to exchange them for a new set. I'm sure it could be used, but I'm not going to.
97 FZJ80 40th Anniversary Edition
My 1FZ-FE Full rebuild: 1FZ-FE Rebuild full overhaul - picture heavy

baldilocks said:
Are you at a point where you could estimate what this rebuild will cost you?
Click to expand...


I'm estimating about $4K for the long block. That's all machine work, pistons, rings, valves, gaskets, water pump, timing kit, etc. to complete the engine itself. Does not include external stuff like hoses, belts, radiator work, injector cleaning, etc... If you use all OEM parts, the same rebuild would be $6K or more. I've been careful to source parts from Japanese manufacturers where it makes sense to bring the cost down. In many cases it is likely that they are made by the same company as OEM. I'll post details and photos of each part I install as I progress. The labor for R&R and engine assembly is myself as well as countless hours researching and sourcing components.


SupraTuRD said:
Are the head bolts and main bolts reusable? Does ARP make bolts or studs as an alternative?
Click to expand...


The head bolts can be re-used per the FSM, they are measured before re-use. I am using an ARP stud kit on the head that I purchased from paradise racing. It is likely that a supercharger or turbo is in the cards for this truck at some point in the next few years.

The main bolts and rod bolts are being reused. The FSM says that if a main bolt 'does not reach torque spec' to replace it. I'm not sure what they mean by that.

I just installed my head with that stud kit from paradise racing. That toque se down very nicely. My question is: Do we go back for a re-torque after some heat cycles? I have found that most here on Mud never do and have no issues.
1993 FZJ80- "The Big ugly” ready, willing, and able
1994 FZJ80- A victim of poor judgement
2005 Dodge CTD with some stuff.....

Did you replace the oil pump bushing?

If it is not too late can you please compare the main bolts to the head bolts????

NLXTACY said:
Did you replace the oil pump bushing?
Click to expand...


Getting ahead of ourselves... this is a real time rebuild. I'll get there.

scottryana said:
If it is not too late can you please compare the main bolts to the head bolts????

I have been told you can use the ARP studs for both.
Click to expand...


I'll snap a photo tonight and post it comparing them.

So far tonight I've found that I'm not happy with the piston to crank oil clearance. It's gauging at .003" which is .001" past new spec and half way to the "worn out" spec of .004". I'm taking the crank and pistons/rods back to the machine shop to have it checked out tomorrow. I also have some concerns about the quality of the pistons upon very close examination.
97 FZJ80 40th Anniversary Edition
My 1FZ-FE Full rebuild: 1FZ-FE Rebuild full overhaul - picture heavy

Just making sure, not enough people know about it
Land Cruiser solutions you didn't know you needed.
Absolute-Wits-End.com

NLXTACY said:
Just making sure, not enough people know about it
Click to expand...


You just need another 1FZ-FE pic 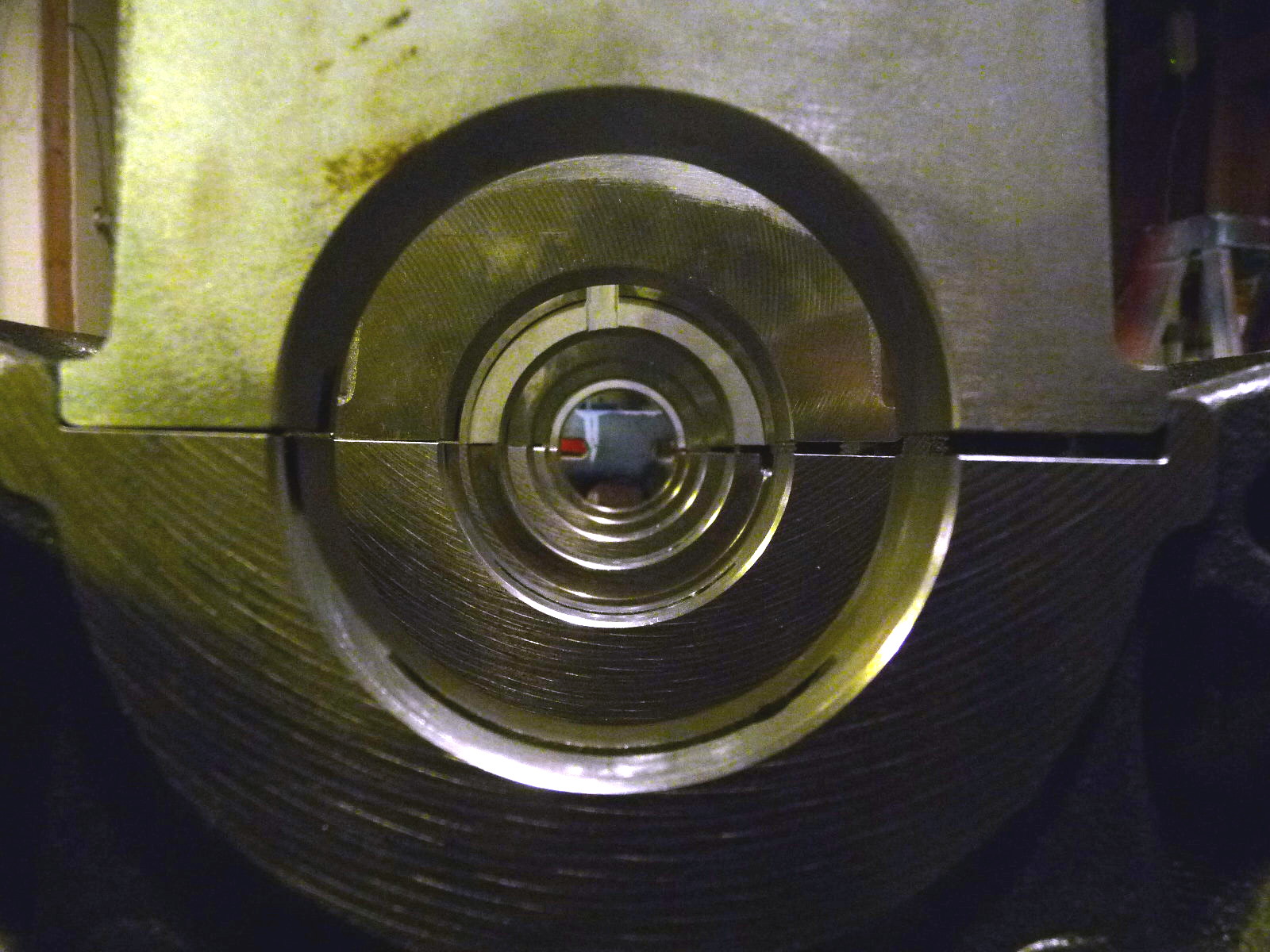 Here is the main bolt up top. Head stud below:

Stud bottomed in block and bearing cap sitting on it's machined surface: 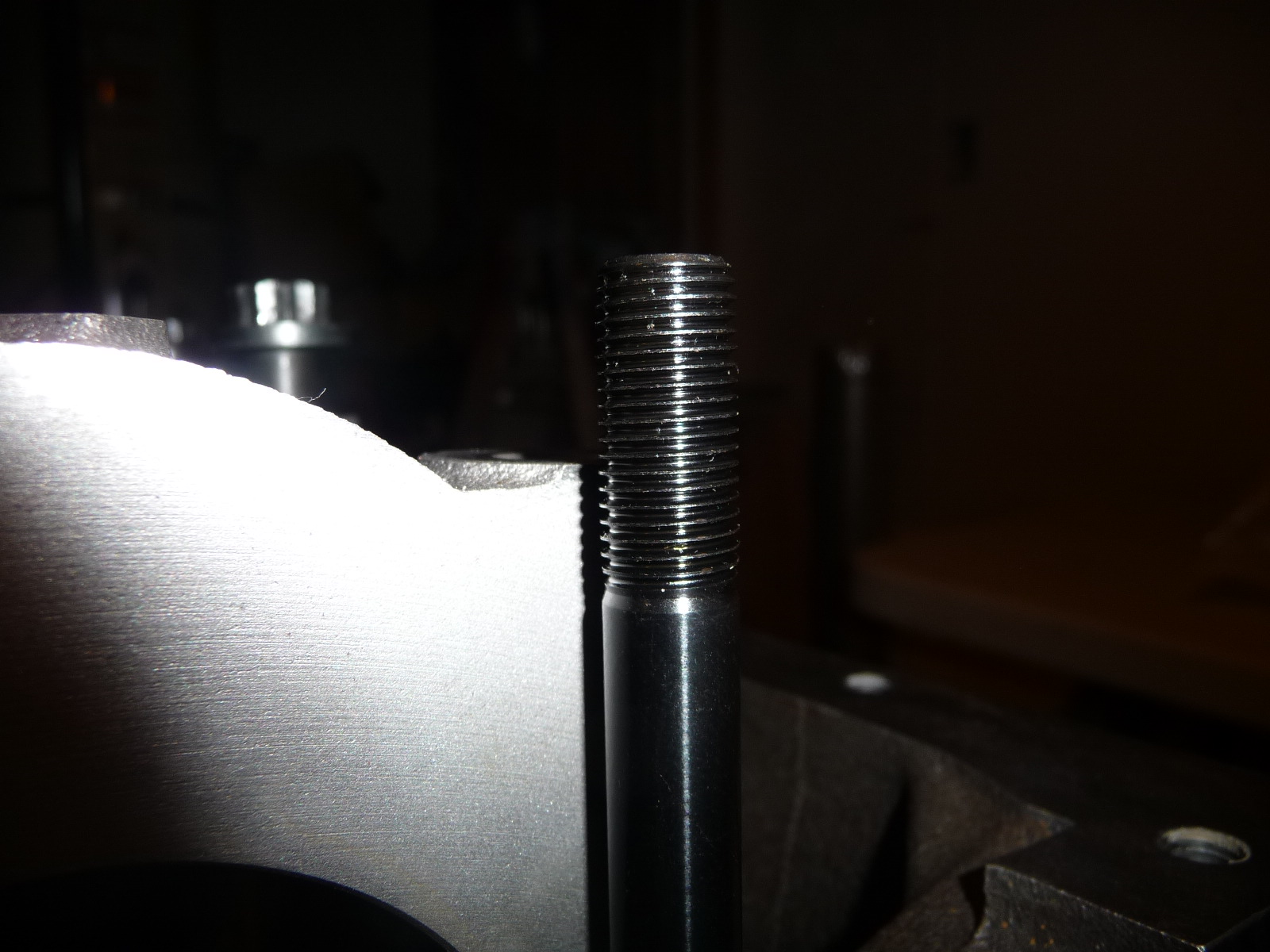 Bearing cap installed and hand tightened to about 10 ft/lbs, with included nut and washer from Paradise Racing Kit:

Sorry for the focus problem 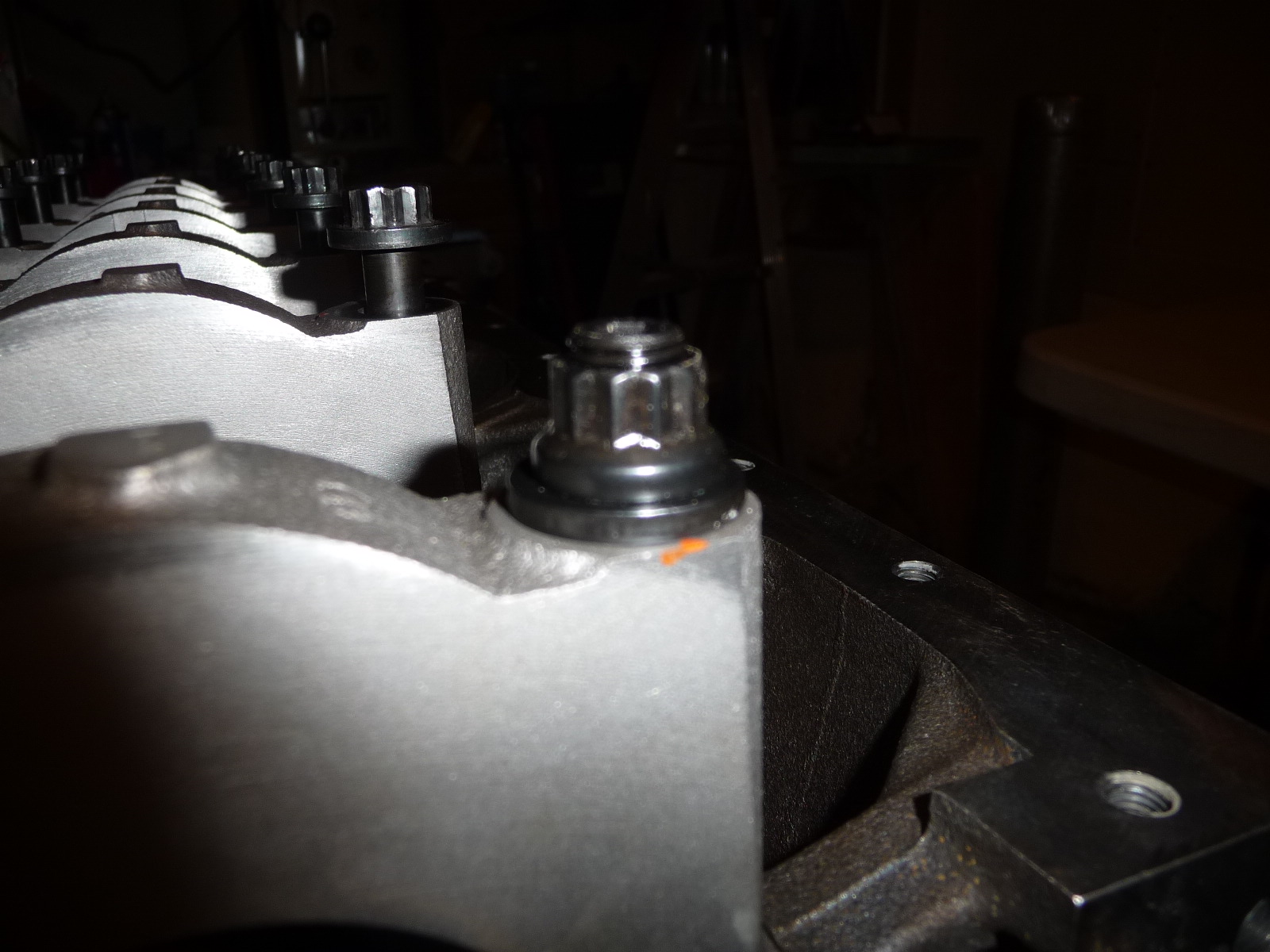 The mechanicals of the stud kit are certainly workable as main bearing studs. The kit includes the proper number of studs, washers and nuts and the length and threading is good. Would the materials and strength properties be OK though?
97 FZJ80 40th Anniversary Edition
My 1FZ-FE Full rebuild: 1FZ-FE Rebuild full overhaul - picture heavy
You must log in or register to reply here.

Today at 5:54 AM
azzachase2
A
R
1FZ-FE Rebuild: Would you reuse this oil pump bushing?