looking for some welding advice from someone that might have far more experience than I do.

I cut out the rear floor in my 40 to replace it with a solid one. I had rust along the bottom of the vertical wheel well piece. I cut off the bottom 1 1/4” and welded in a new piece. I spaced welds 1” apart as I went and repeated up and down the 24” length I was working on. I think I must have rushed it a little because it turned out wavy along the bottom edge. I read that’ll happen if you work too fast and the metal gets too hot. Did I ruin it? Will I be able to weld it flat one the floor is in, or do I need to replace that vertical wheel well piece with a new straight one?

I warped my rear panels some also when welding. From what i have read, they won't ever go smooth, and I figured I should have welded about what you did on the first run, but also side to side with each
weld. I am not an expert by any means and hope you get a good answer.

@Beckley yeah in this case I was only welding along the top edge. I tacked it all the way down every inch or two first so it wouldn’t shift on me. This is one of those things I can afford to pay a pro to do, but part of the fun of owning a cruiser is doing the work and learning something new. Maybe I was wrong this time. @Tancruiser here is a pic 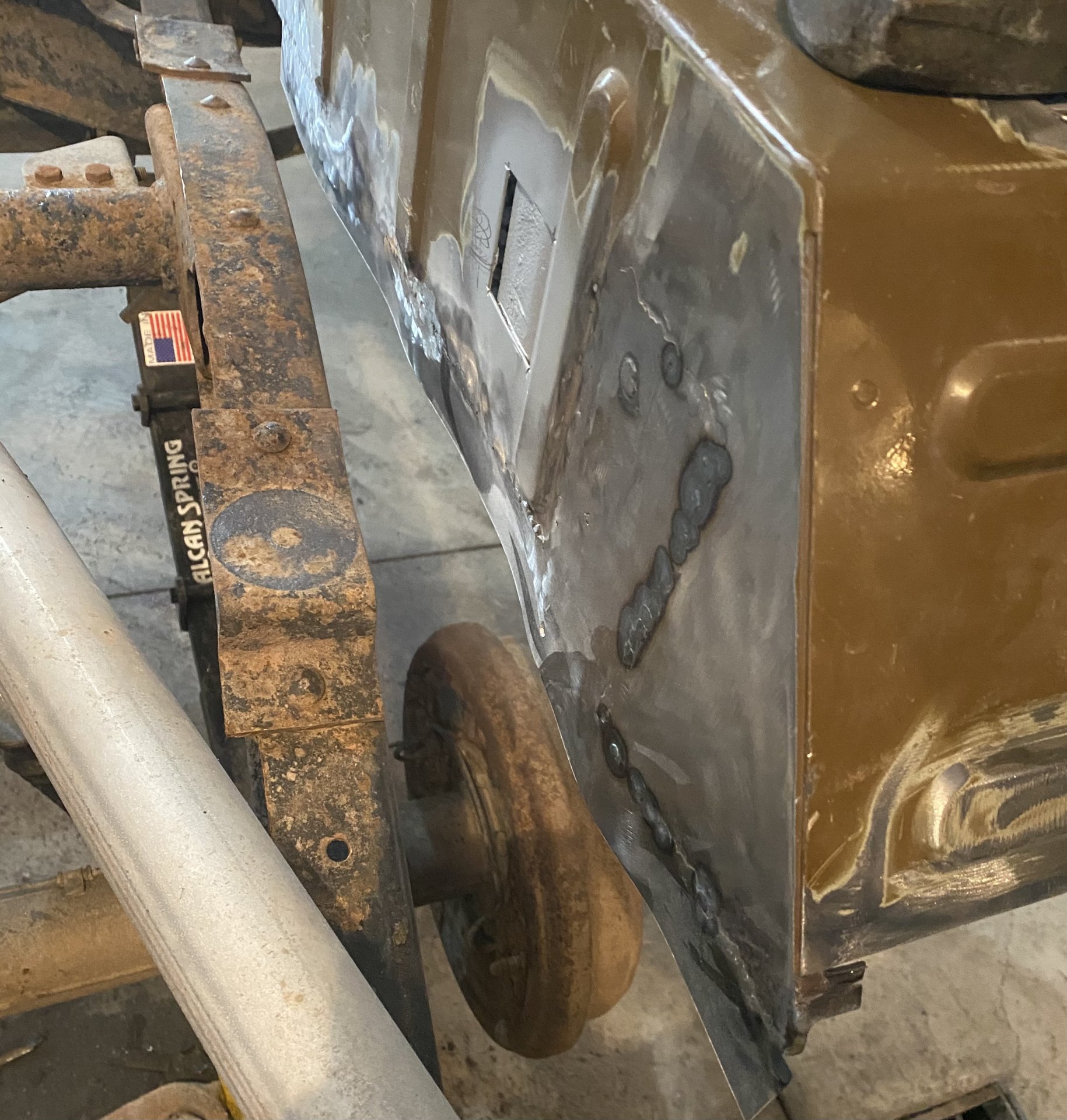 residualboulders said:
@Beckley yeah in this case I was only welding along the top edge. I tacked it all the way down every inch or two first so it wouldn’t shift on me. This is one of those things I can afford to pay a pro to do, but part of the fun of owning a cruiser is doing the work and learning something new. Maybe I was wrong this time. @Tancruiser here is a pic

Your FJ is exactly the same color a mind and your rust and damage looks just like mine did. I agree with you doing the work and learning something new is half the fun of having one. Good luck getting that straightened out. Like I said someone with more knowledge could give you some better advice than I can

Did you brace everything up before you cut it open?


Tack every 6" or so and let ot cool before tacking again. That tack weld should just be a spot, keep stacking those spots until you have it all welded.

Use something like a copper bar or pipe hammered flat to help dissipate the heat.

You probably want to clamp something solid along that bottom to keep it as straight and square as you can for now.


There's a great list about 30 pages or so into my thread, it will pay off to stop and read them, they were passed to me by a pro here on mud.

thanks @rkymtnflyfisher I just read that post. That is all good info. I should have clamped something to the back. I knew I needed to space out the spots, let it cool before hitting it again in the same spot. Honestly I was just excited to have a full day focused in the shop and determined to make a dent in the project - i rushed it for sure. I think I'm just going to tack each patch up. Let it cool, then move from one patch to another over hours or days so it can stay cool. Youtube welder suggested hitting it with an air nozzle, not a bad idea.

My rear sill, quarter panels and most of the wheel wells are solid. The only thing i was cutting out is the floor and some patches in a few spots on the wheel wells. So i think the only movement could be with the vertical wheel well pieces inward and outward. I had a pro install new rear quarters about 15 years ago and i've been really protective of it since so they are actually in perfect rust free condition. I was trying to limit the rust in the floor spreading which mostly worked, but finally decided i need to get them fixed to keep the mud and water out of the cab. Hoping to fix these few floor issues and have her solid for another 15-20.

I may end up replacing that whole vertical piece, haven't decided yet. Maybe I could just cut off the bottom an try again. Above the new bottom piece it looks pretty straight. In retrospect, it probably would have been better to get the new floor in and then place that lower piece so I could tack it top and bottom all the way down. Hard to keep the bottom perfectly straight when it's not attached to anything.

Sometimes when you learn a new skill you do things twice to get it right, that might be the case here, ha ha.

You could try heat shrinking on the convex areas, looks like you have access to both sides so you could hit convex areas on each side. Looks like your paint is already compromised locally. I’d do a few spots vertically in each convex area, but you may still end up with oil canning. Maybe try some off-dolly work first in the smaller concave distorted areas.

When in doubt, Chris fix. I’ve never welded before but Chris walks step by step
You must log in or register to reply here.

N
Does anyone know what this is? It came from bell housing I think.

Transmission sheet metal hump for my 1971, who sells it?

Thinking of Selling- Help with Value?
2