lumbee1 said:
Take the carpet to the car wash and spare it till you run out of quarters. I pulled mine a few years ago because it was sticky. I laid it on the driveway and sprayed heavy amounts of dawn and lysol on the fabric and scrubbed it. The rinse looked like coca cola. I did this several times until the rinse was less dangerous and brown. Once dry, the carpet felt amazing and soft.
Click to expand...

I seriously thought about doing this, but given the mold I really wanted to remove the future source as much as possible. I know how hard mold can be to get out of a vehicle (or building for that matter) and the PNW just makes it that much tougher.

zapatius said:
I'm wondering if the knocking sound might be the murder weapon from the crime scene in your interior?
Click to expand...

My wife was pretty horrified when I brought it home. Interior was stripped and bagged for the dump inside a couple of hours of having the vehicle.

Muddy1 said:
Great save. Glad it's not going to the crusher. I personally would think hard about putting vinyl or some non-carpet material in there. I do not understand that a utility vehicle would have carpeting and leather seats. For me, it would be cloth (maybe vinyl) and definitely no carpet. That way, when there is a muddy mess or even spills and puking, it's not a big deal. My "cheerful and cheap" utility vehicle is a Honda Element, and frankly I LOVE that the interior is made of some rubbery/plasticky compound, it is REALLY easy to clean the insides.
Click to expand...

I'm going the carpet, leather and cushy seat route. Personally I agree with you and have sprayed interiors with bed liner in the past on other wheeling vehicles, but the deal I made with my wife was this is going to be an overlander we can both enjoy. Also, selfishly, I know if my wife doesn't like being in the vehicle/ isn't comfortable my budget gets cut in half.

Finished most of the interior cleaning today. Removed the stuck-on jute carpet backing with a wire brush then scrubbed and washed the entire floor with a carpet extractor. Amazed at the nastiness that came off, especially considering the carpet had already been trashed. Looked like a lot of soda or some other brown, sweet-smelling liquid was all over the floorboards. I was actually pretty impressed with how well the extractor worked - accurate enough to spray down desired areas and avoid electrical, etc. Had a few challenges under and around the shifter because of the tight quarters, but managed to remove the shift knob, raise the selector housing and get most of the crud off.

Tools of the trade - butyl cellosolve based degreaser and an enzyme product to break down any remaining organic residue in the crevices. 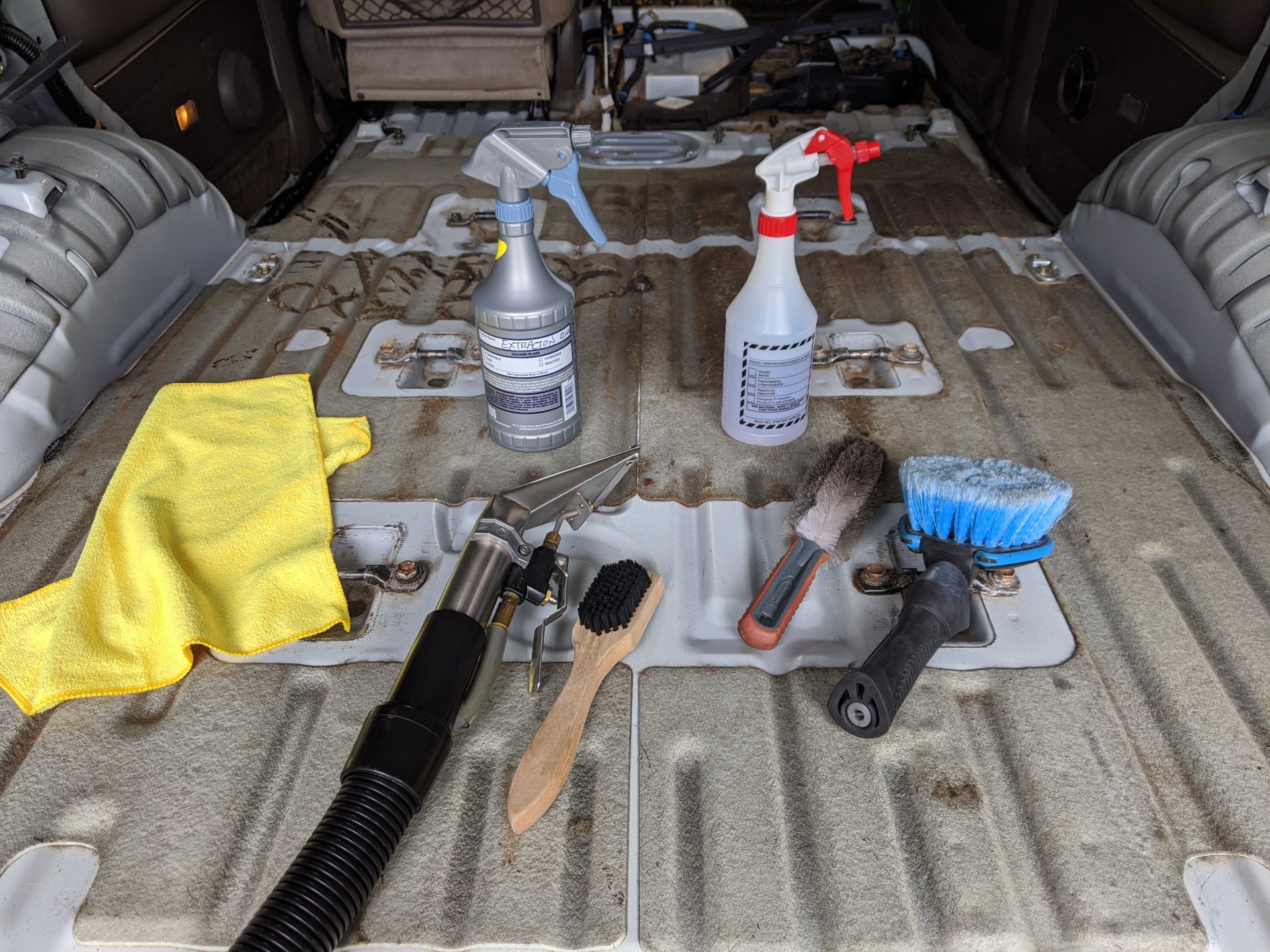 Finished results looked pretty good. Definitely smells a lot better. Decided not to pull the rear heater and deal with the coolant lines. Managed to get around it well enough and extract all of the fossilized cheerios. 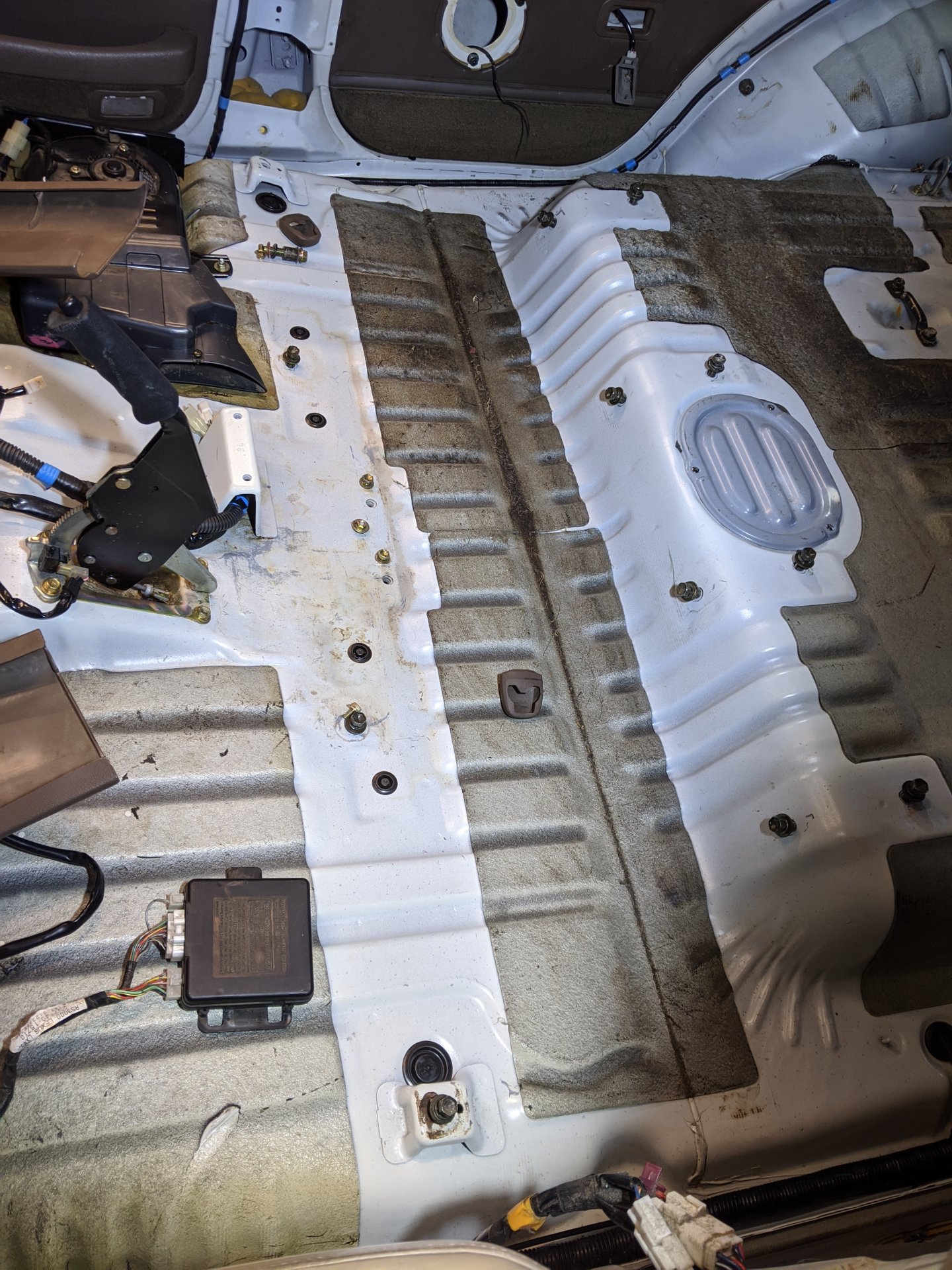 Removed some baggage while I had the rear panels off. Unused jack and holder, car phone receiver, 3rd row belts. Saving the bracket off the receiver - Looks like it might be useful to mount something else on behind the rear panel. Added some pipe insulation to the connectors I removed from the reciever so they ddon't rattle around inside the rear quarter. 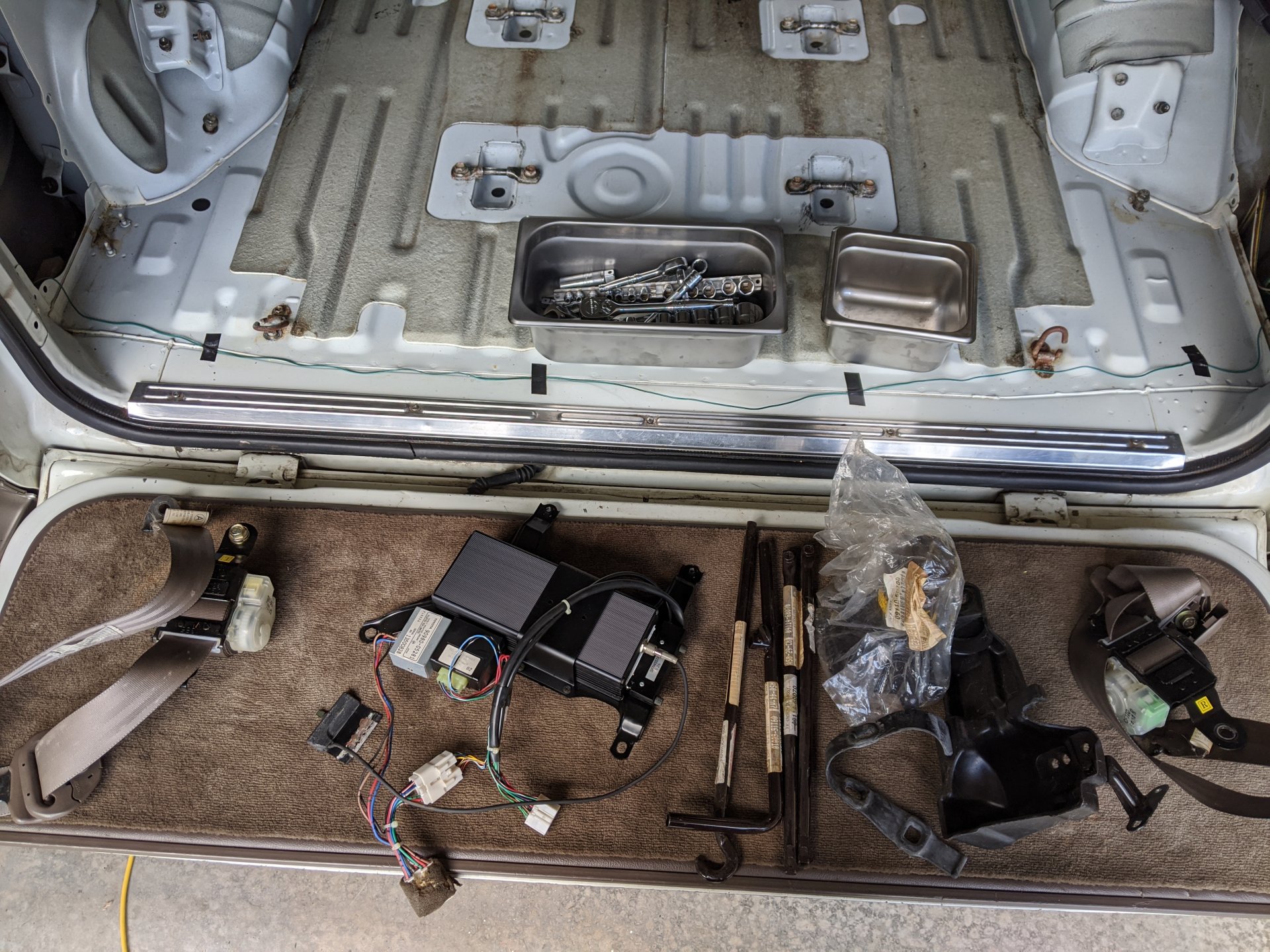 Cleaned the seatbelts with the extractor which worked really well. Mold was removed in one pass. Had to hit the back belts a few extra times - I think they'd been the victim of the same food spills as the floor. Extraction fluid did a good job. Keeping the extraction shoe pointed towards the tensioners kept them dry without having to bag. I'd originally considered pressure washing, but was worried I'd mess the tensioners up and was concerned the webbing may not stand up well to my washer. Belts are hanging to dry now. Hoping there's no residue - If there is I'l extract again with clean water. 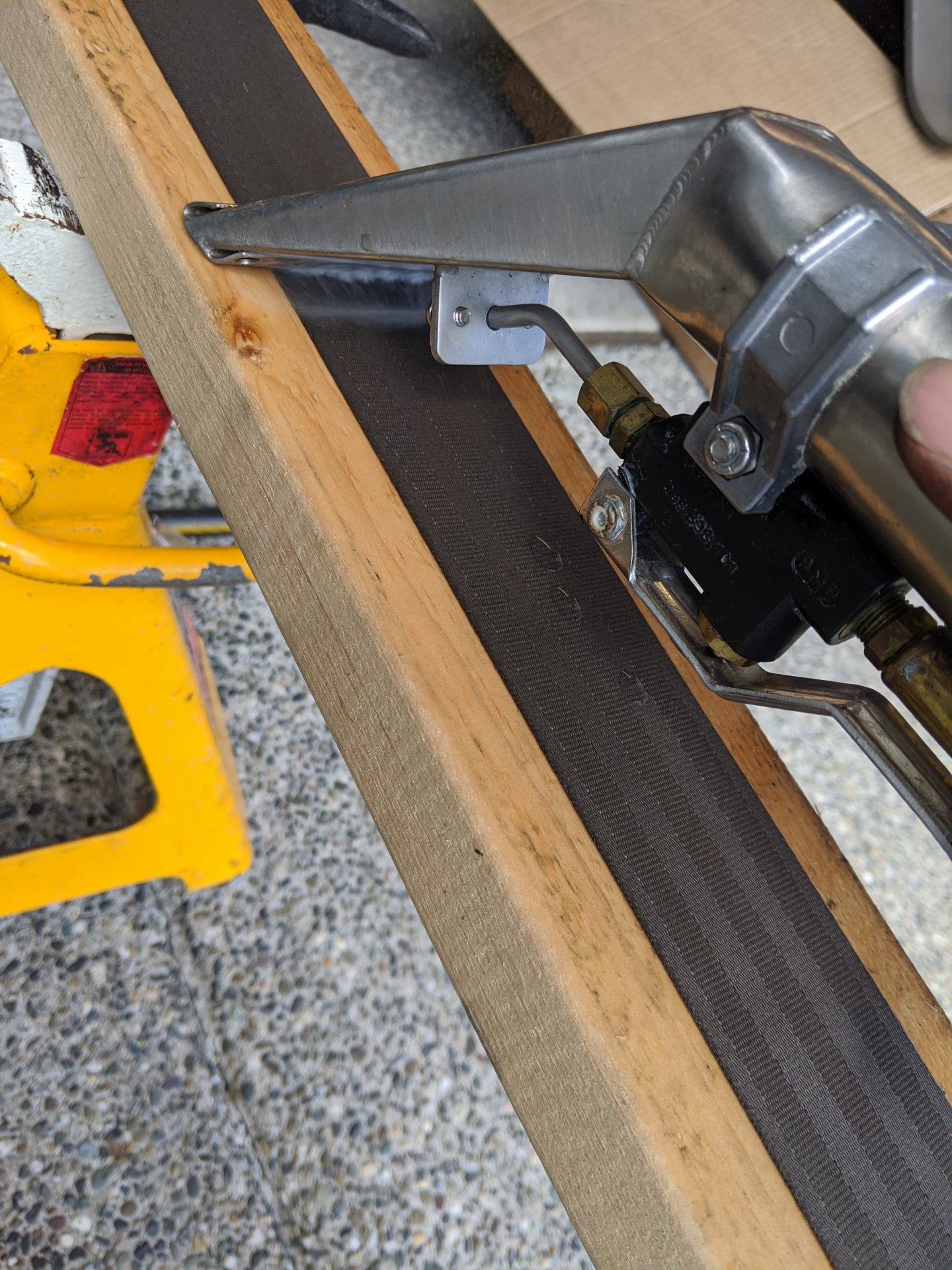 Noticed the window seals were jacked up on my rear sliders while I was cleaning the interior. Looks like the outer weather seal wasn't over the panel. Both windows were the same on the bottom horizontals and part of the way up on the ends. Assuming this would have been a contributing factor to the moisture in the cab. Pulled the seals back over the body lip, blew out the drains and lubed the rubber. Blew out the sunroof drains while I was at it since a few Members have mentioned the drains being problematic - Both looked completely clear, but cleaned for good measure. 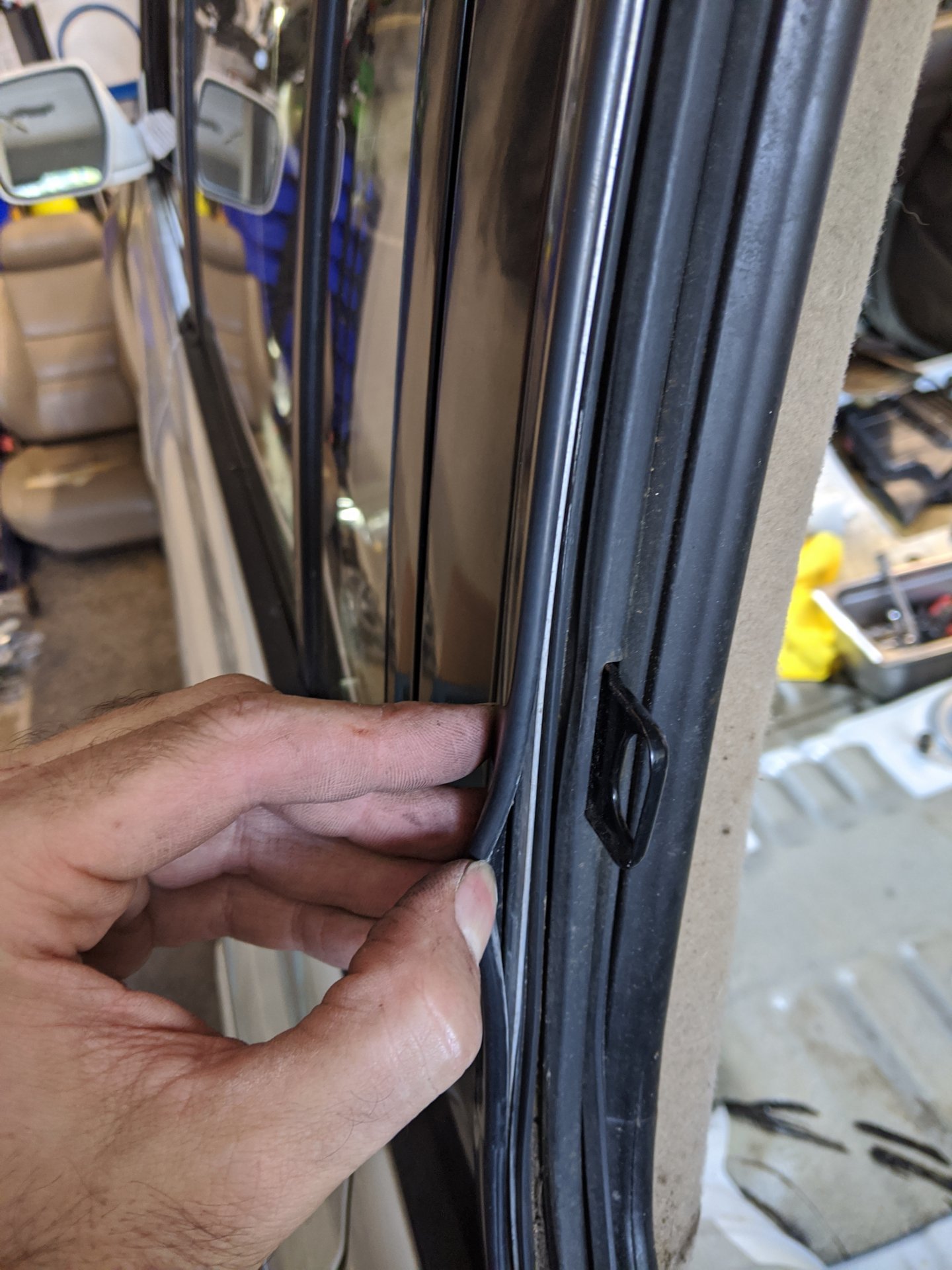 Ordering some Second Skin Heat Wave Pro to replace the factory jute and ordering a new carpet tonight. I'd thought about removing the factory noise control and installing Damplifier Pro, but I really, really don't want to remove the factory butyl (or what ever it is). I figure if noise bothers me after the install I'll look at some Luxury Liner in the rear which won't be too hard to add.

Looking forward to moving on to some mechanicals - All of this interior stuff never feels very productive.

Saw on teh cruiser marketplace group on FB that someone is selling a while LX, same condition as this one- trashed interior, engine making noise- and came here to check to see if this was being sold. But you're not in MS and that truck is. Gave me a start.
Carry on

Look in the bottom of the quarter panels, water can leak and pool up their. 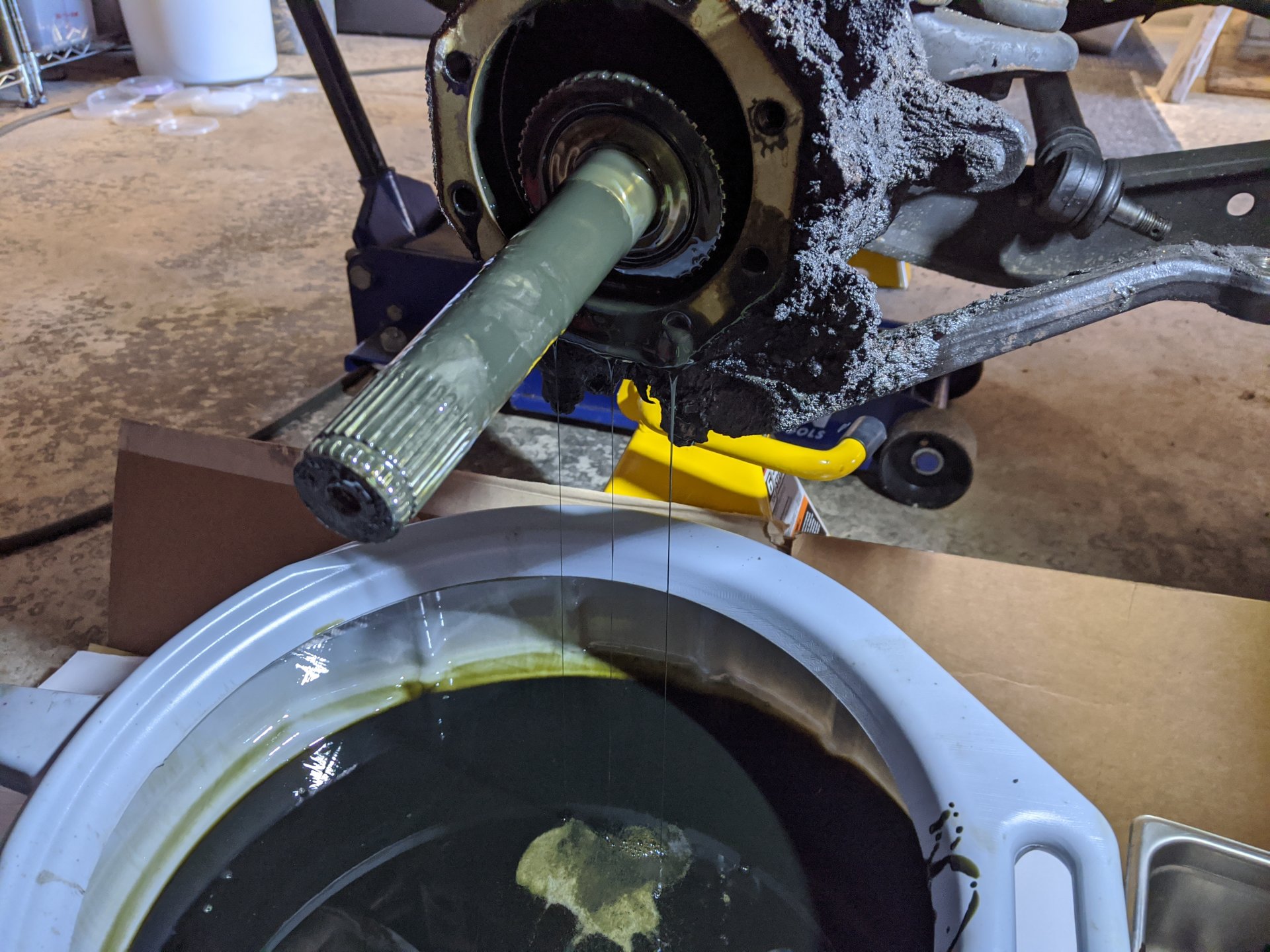 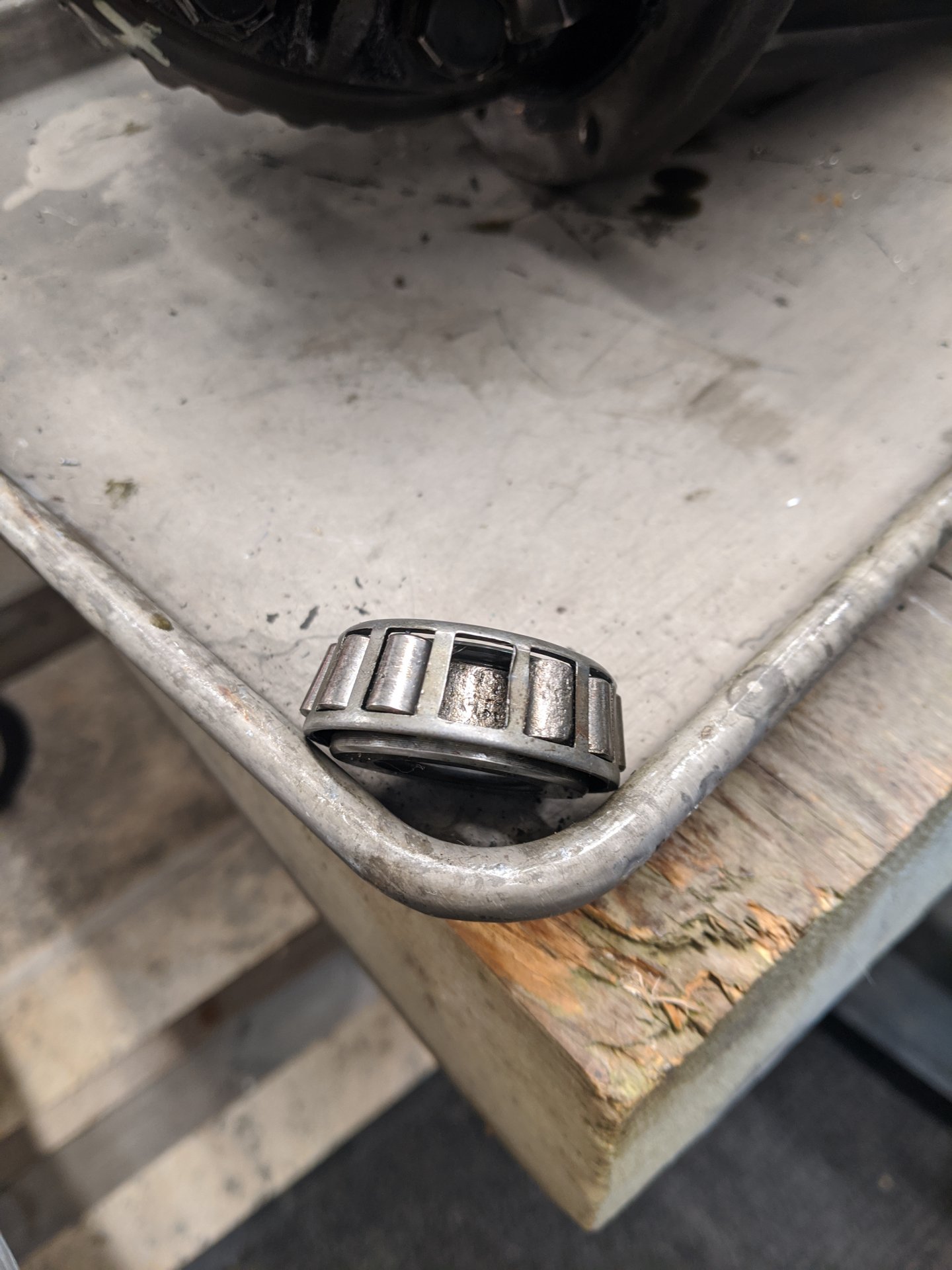 Sounds about right for a knuckle rebuild!

On the upside, it had new brake pads ...

Feldrian said:
Timken races with nameless wheel bearings (WTH ... who only replaces the bearings and not the race?)
Click to expand...

Funny you mention that. Mine was the same way, all Timken races (which is a fine bearing) with no name bearings. Well actually 2 out of the 8 total bearings were Nationals.
Idk why anyone in the right mind would call that OK. smh

Good catch though. Time for a bunch of Koyos!

Probably didn't have the punch to remove the races? lol

b16 said:
Probably didn't have the punch to remove the races? lol
Click to expand...

Yeah, probably. They obviously didn't have a 54MM hub socket. 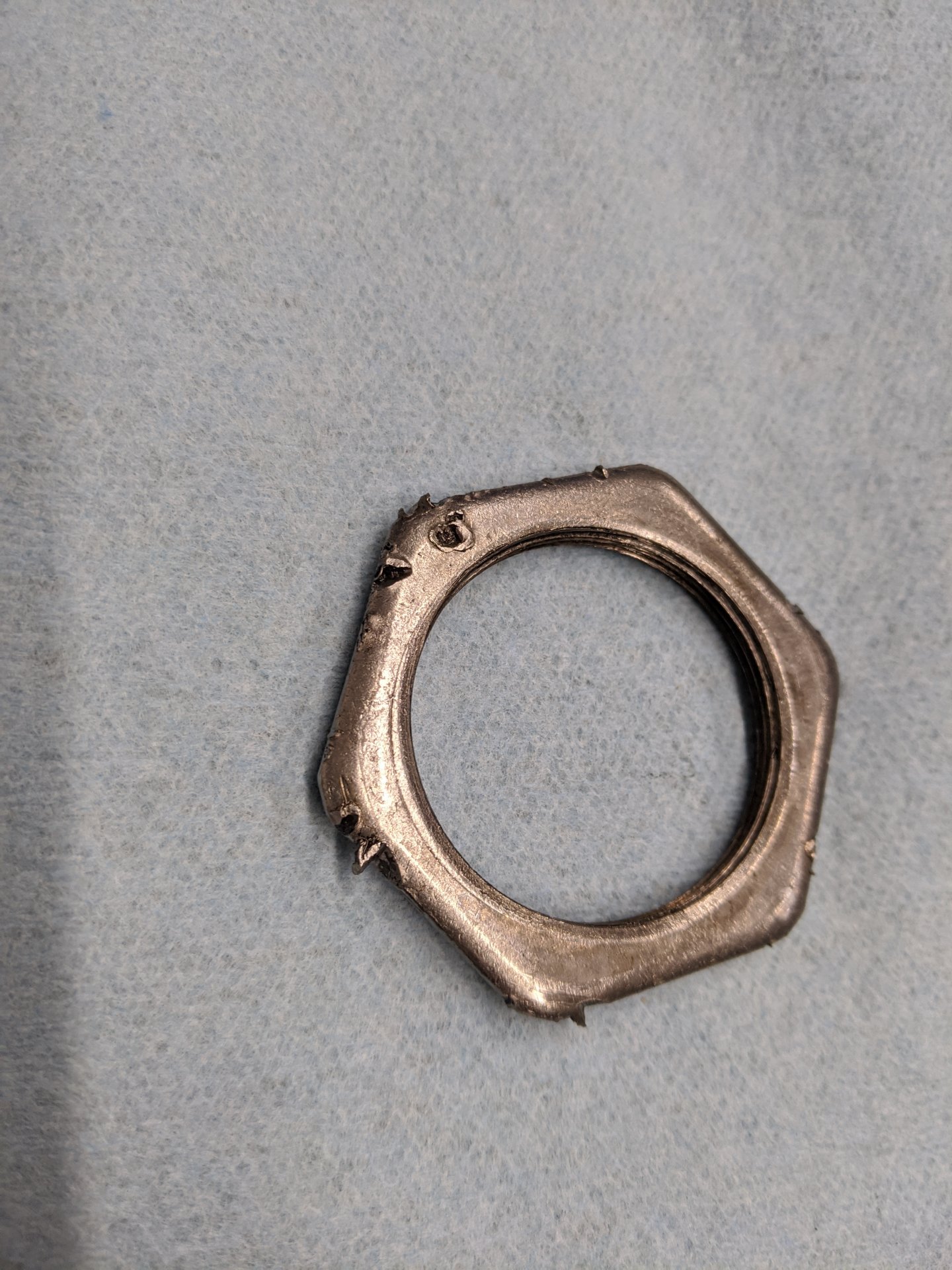 Finished up the Damplifier install today since I'm waiting for a ton of mechanical parts and my front diff is at Torfab waiting for an ARB locker and 4.56 gear install.

Thanks to Eric at Second Skin for hooking me up with a Mud discount on the material. Ordered regular Damplifier (not Pro since I didn't remove my factory sound deadening) and Heatwave Pro as a jute replacement when I install the new carpet. Install was straight forward but time consuming - Took about 5 hours to finish the truck. Because I figured I was manly I didn't wear gloves, despite warnings all over the place that the material is sharp. Managed to slide the foil under my thumb nail at the end of the install when I was getting complacent and sliced the hell out of myself. Wife is still making fun of me. 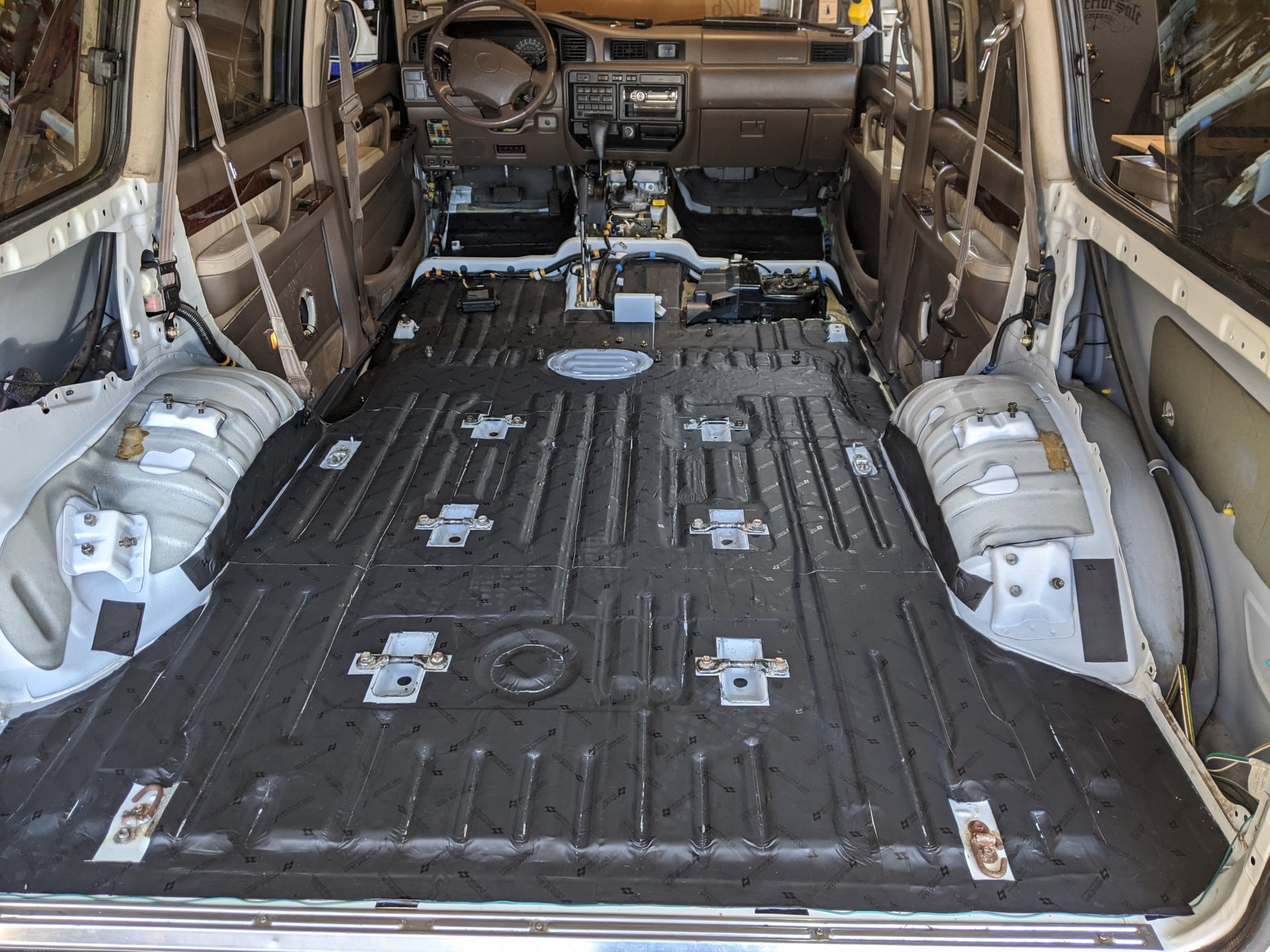 HELP - 97 New rebuild, stumbles when I give it gas