TuffMudder said:
I was able to find info on cleaning the alternator.
Alternator clean and rebuild
Alternator brush change

Is there a way to protect the alternator while mudding?
Click to expand...

Hmmm, any other ways?

True story, I went to get in my LC this morning to go get some battery cable to do the swap so that i wouldn't have to worry about the car not starting due to a low battery anymore....and my car was dead because i left the ignition on last night.

I'm pretty sure that qualifies as irony
T

Had the car double jumped (which is a feat in itself on memorial weekend around here). Got on the road and realized it had started, but i still had no accessory power. drove it on the interstate and around two about 30 minutes and still nothing, so i'm going to go out on a limb and say you were right about the alternator @mudgudgeon. Pulled over in a walmart parking lot and it died while sitting still idling. An hour and a half later after finally finding 2 people simultaneously to jump it, I drove to adv auto where it did again in the parking lot before i could get it parked.

I bought 2 optima's (my original plan was a more economical, but the best laid plains...), and then had the starter system checked and it came back alternator needs serviced (though, I was already on board with that. Bought some battery cable and headed straight home.

Now time to do some research on how to remove that alternator. Im hoping i can just clean it out and be good to go. If so THEN I can take care of the 12v conversion.

Trying to get the alternator out. I removed the tension retainer bolt and what i believe is the pivot bolt underneath. I think these are the only two items that need removed, but the damn thing is in their tight. Going to take a rubber mallet to it, but thought i'd drop in here incase i was overlooking something.

TuffMudder said:
Trying to get the alternator out. I removed the tension retainer bolt and what i believe is the pivot bolt underneath. I think these are the only two items that need removed, but the damn thing is in their tight. Going to take a rubber mallet to it, but thought i'd drop in here incase i was overlooking something.
Click to expand...


I remember mine being a very tight fit in the bracket on the pivot side.

Be careful ordering a replacement. The alternator housing and bracket changed at some point, newer ones are something like 4mm larger
T

Rubber mallet it is then!
T

Well, the rubber mallet did s***. From the top, from the bottom, even a 2lb heavy hammer, nothing. Finally took a straight crowbar against the alternator portion of the pivot joint and 5 or 6 solid wack later it was loose.

I had removed that battery and battery box to make room, but still couldn't remove the alternator. I detached the power steering pump (Im pretty sure...i think), but it wouldn't move enough to make clearance. I decided to detach the hose from the top and was greated with the release of a lot of pressure, some power steering fluid and i tore the O ring the was holding the piece on. 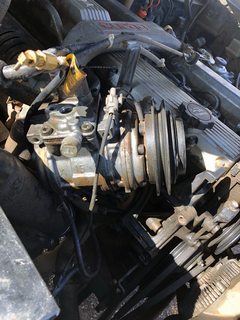 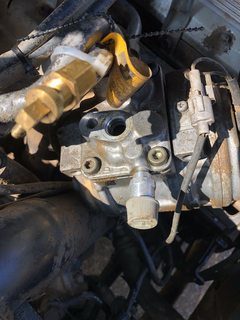 I'm guessing this wasn't the proper way to remove this, but this is a lot of "on the job training"

Finally got the alternator out (that entire process took embarassingly long, but hey, removed my first alternator AND had my first explosion of green s***) 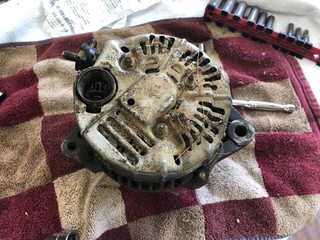 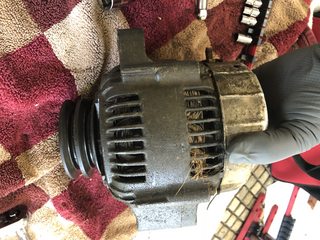 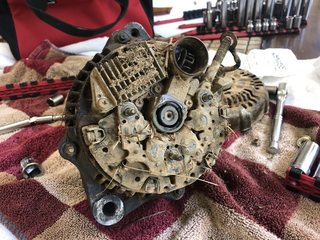 I forgot to get a pick of the brushes, but i initially thought they had been worn flat, but with a little cleaning they popped out. 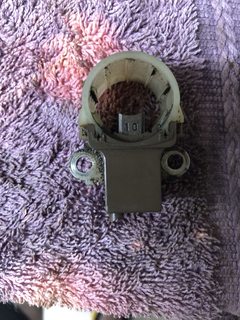 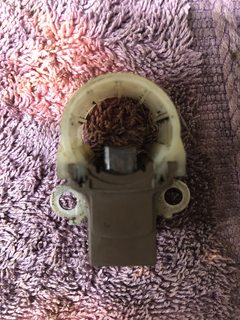 Now my problem is I CANNOT get the pulley off even with an 18v impact gun. Am I doing something wrong or i'm i going to have to get a pneumatic impact wrench?

Some other questions questions:
Are the brushes in reasonably good shape or should I leave the alternator out and order a replacement?
Does anyone know the size of that O-ring i broke?
Any pointers on how i should have moved the PS pump?
When I put this back together, do i just need to add ps fluid and replace the O-ring?

@IanB @mudgudgeon and everyone else who has been nice enough to chime in before, I could certainly use some advice
Last edited: May 28, 2018

Have you downloaded the factory service manual for the 80 series chassis and 1HD-T engine? They can be VERY handy when self-teaching yourself some of this stuff, like the PS removal.

The pump you mention, is it the belt driven pump above the alternator? Not all your pics are showing up.
If so, good news, and bad news.

Good news is, you should end up with nice cold AC after you put the gas back in,

Bad news is, sounds like you let the gas out of your AC. As well as replacing the broken o- ring, you'll need to replace the AC dryer, have the system evacuated, top the oil, and re-gassed.

Power steering pump is gear driven, and is on the other side down low, and won't hold a lot of pressure, if any with the engine off
T

@IanB I'll get a copy of the service manual tonight

@mudgudgeon That sounds mostly like bad news. So the ac dryer has to be replaced? Also, what do you mean by top the oil? I'm researching as im typing here

BTW, the answer on the pulley was a pneumatic impact wrench. Went and bought one, drug out the air compressor, hooked it up and it spun right off, first try.

Unfortunately, I still can't get the alternator case apart. The two halves are now about 1-2mm apart and the two halves now wiggle loosely but they wont come apart. I've looked all over it and there isn't anything else holding it. I only removed the big nut on the pulley. there appears to be a smaller nut, but it didn't budge with 800ftlbs of impact wrench.

Any ideas what i'm doing wrong preventing me from separating the halves?
T


Looks like it, but I'd probably verify it's correct for your vehicle by cross checking part number on Partsouq, or Toyodiy.

The AC system has refrigeration oil in it to lube the compressor. Too little is bad, too much is bad. If you lost oil, it needs to be replaced.

I'm not sure about separating the alternator casing.

Your brushes look good.
If the copper commutator bars that the brushes contact are in good condition, you may be able to just clean it up, clean the contacts where the harness plugs in and run it again.
T

I was finally able to get the case apart. It turns out, its just really tough.

Basically i worked the edges with multiple screw drives until I could get a small crowbar in (first part took forever). I then used the crowbar to widen the gap between the two halves further. That part was unnecessary it turns out. It did widen the gap considerably, but once the gap widen far enough, it no longer worked. I could have skipped that step and went straight to the final step where i clamped the single side bolt hole into a vice, put a sturdy screw driver on the bottom half of the body of the body of the pivot joint and wacked it with a heavy hammer for about 5 minutes and it finally came apart. At no point did it get easier until it fell off. 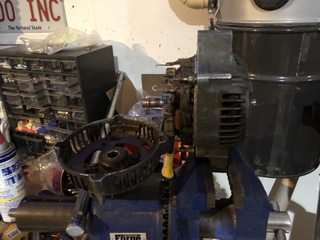 It looks like i'm almost finished tearing it apart, but there are 4 8mm bolts holding the the bottom half together, and i somehow managed to misplace my 8mm deep well socket during while working on it today. I'll find it tomorrow and finish the disassemble 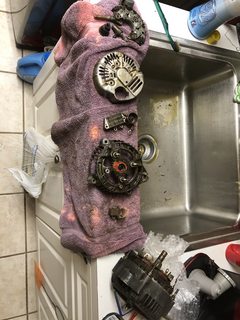 Checked Toyodiy and that is the correct part number, so i went ahead and ordered it.
This is the connection where the o ring broke. I've gone through diagrams at Partsouq.com and cant find it. Any idea how to get a replacement, or do i just need to find one that matches it locally? 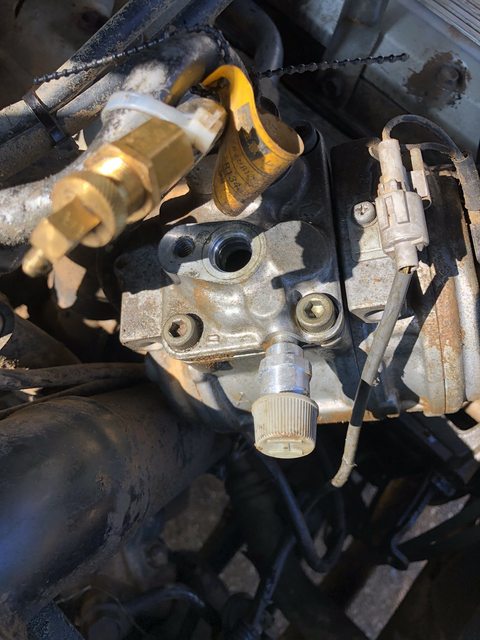 Is this a good time to see about converting to 134?
T

The prior owner was @Crab Sack, and he already did the conversion, but otherwise yes, me nuking my ac would present the perfect time to take that on
T

For better or worse the alternator is clean and back together. Hoping to have time to put it back in tomorrow 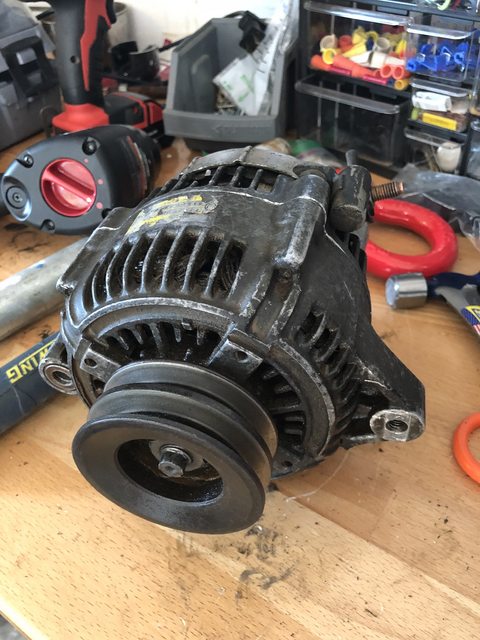 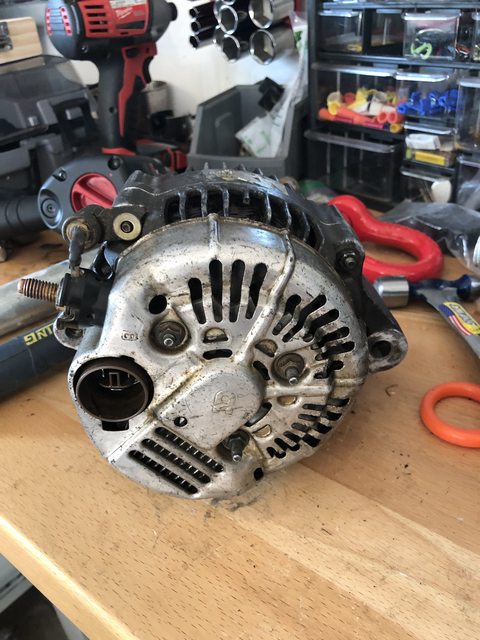 Tuffmudder, loving your ride and all of your posts. I have a 1991 HDJ81, I know I have to replace the rear brakes soon. I browsed through your posts but did not see anything about rear brakes, have you had to work on them since you owned your Land Cruiser?
You must log in or register to reply here.

Thoughts on Manafre drop brackets vs off set bushings