Another quick question on replacing my driver side floor plan. Just wondering about average cost. This involves cutting out the old floor pan and removing the tool box, welding in the new floor pan, and welding back in the tool box for the seat. Took it to a welder who wanted $700 (i.e. 10 hours at $70). Seems a little high to me. Any thoughts?

Seems a little high to me, but I guess it would depend on the quality of his work. I have a body shop guy here that does awesome work that would probably do that job for me for less than half of that quoted cost. Probably want to look around a bit. Just my thoughts.

Thanks...welder has come down to $500. I should note that I am supplying the new floor pan. Still seems high to me.

I don't think that sounds crazy at all. No matter how you slice it it's probably a day's worth of work — plus or minus 8 hours. It seems simple, but anyone who has done that type of thing before knows that there are always problems, and stuff that takes longer than initially thought.

If he is quoting, removing old seat, cutting out the old rusty section, welding in the new and grinding it to a clean look, and re bolting the seat, for $500 and you can pay him — I'd say that seems fair.

That being said, some of the floor pan patches out there that I've seen (Like real steel cruisers) don't come with the structural support and body mount underneath. So that would have to be cut off the old pan and welded to the new as well. And there is the body mount issue. Hopefully that bolt comes loose, if it is stuck and won't budge it will need to be cut off and new one purchased and re-bolted on. But that depends on where the pan is rusted and what part you are replacing.

The other thing, is you said he was a welder, not a body shop. A body shop will give you a body shop job, hopefully ready for paint and fairly tidy. A welder might just give you a welded piece, functional, but not pretty. So it depends on what you are going for, obviously CAVEAT EMPTOR.

I got several quotes and 700 is right on par with what I got and ended up paying. Got 1300 from one shop and another wouldnt quote the work or be able to do it for months, most normal shops dont want to touch restoration work as it doesnt pay as well as insurance work. I found a welder off of craigslist and met him at a grocery store parking lot for him to take a look at it and the piece I had to replace it. He quoted me for fixing a couple different parts. My driversside was eaten away as well as my rocker panels. He ended up having to fabricate a new support under the driver side. If you want to see details click the link in my signature.

I would love to fix it myself and learn and spend the money buying the tools for myself but not having a garage and keeping the 40 in a storage unit my options were limited. If you think you would be interested in doing the work yourself I would research welding and maybe even buy a book on it, then search craigslist once you know what type of welder you want to buy. I've seen lots of deals there.

They will find more rust once cutting into the floor, there is always more rust so expect the quote could go up 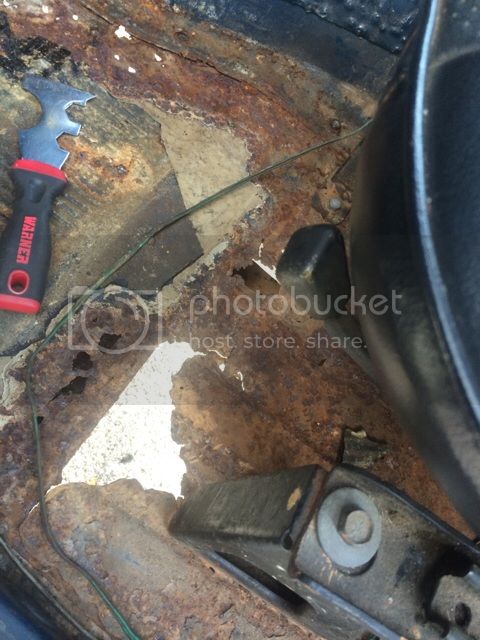 Posting more than I know

I agree that the price is very reasonable, so long as the work is quality. Working with rust is no fun and the amount of prep work to get a proper patch installed correctly could end costing your welder a lot more time. It all depends on his level of experience and his attention to detail.

I bought my drivers floor replacement panel for about $65 from Real Steel Cruiser Parts last year and it took me about an hour to cut out and prep it for welding it back in which was another 30 minutes. I hate seeing other Cruiserheads paying so much to have simple jobs like this done. If you lived closer to Colorado, I'd say bring it on over to my shop and I'll teach ya how to do it so you can save $700.
I have been helping friend's on their Cruisers for years and never ask or expect a dime. When it comes to enlisting their help on one of my projects, they are always there to lend a hand. This was how I was raised and money does not need to be an issue.

I would jump all over it if you've seen his work. No bird crap welds!

I quit guessing how much body work should cost. Seems easy but always more than I thought.

fair price, and you're going to spend a lot more than that.... even from your picture, it's easy to see the rockers have rust as well - the problem is you need good metal to weld in the parts. I've been welding and doing sheet metal repairs for decades, and just did the floors on mine - it took me 8 hours to do both sides - but I had solid floors outside of the rust.

Hi All - thanks for the responses. I had a follow up question for the welders out there: I purchased a replacement driver side floor pan from TOP Manf. It had holes at the edges for numerous spot welds. The welder did weld each spot, but told me running a bead at the front floor pan/body overlap would potentially burn thru. Also sounds a little fishy to me, but might be plausible. Any thoughts on that?

he's right - spot welds don't warp as badly, and have far less risk of burning through

I'm currently enrolled in a welding program at the local community college and this semester I'm taking the Auto Body Welding course.

My instructor says that when welding thin sheet metal you have to be a "heat management specialist". Too much heat in the panel will warp it. So it's process of making tack welds on opposite sides of the panel, allowing it to cool, then eventually competing the weld in very small increments. You don't just weld a bead all around the panel. It takes time to do it right, and time is money.

Also, with sheet metal, the surface must be completely free of all rust and contaminants. Rust (iron oxide) has a higher melting temp than the metal itself, and introduces impurities which leads to bad welds. It's a lot of work to cut, grind/sand the welding area, do all the tack welds and finish the job. You also need all the right equipment that's setup right for your job to include equipment settings, welding wire, and gasses.

I would be wary of dudes off of craigslist offering you great deals on welding jobs. It takes a lot of experience and know-how to do sheet metal and body work right.

I've welded since I was a kid since my dad owns a metal shop. Its expensive to learn and equip a shop. But really it's not that hard to do basic stuff and really if you drive and repair old cars you should do some of this yourself - not just because it saves .money but time as well. Especially for quick projects.

I have just purchased a '74 40 that needs a new drivers floor pan. There is rust by the front left Driver's seat mount. Having inspected it the old pan isn't all rust, but is it better just to cut the old one out and put a new one in or cut away the old one and weld the patch in?
It is right where the seat mounts to the Panel, don't know if that makes a difference?
You must log in or register to reply here.