I stopped to talk and hang out with the original owner of my 64. A great guy. He told me stories and stories about the cruiser and his travels. I let him reminsce as he drove it around Sloan Lake on a beautiful clear colorado day.

Even have the orig HHH lock ;p

I'll make this some tech.. The only thing that appears to be missing is the card stating which tool went into each #'d pouch. Can anyone provide the list? 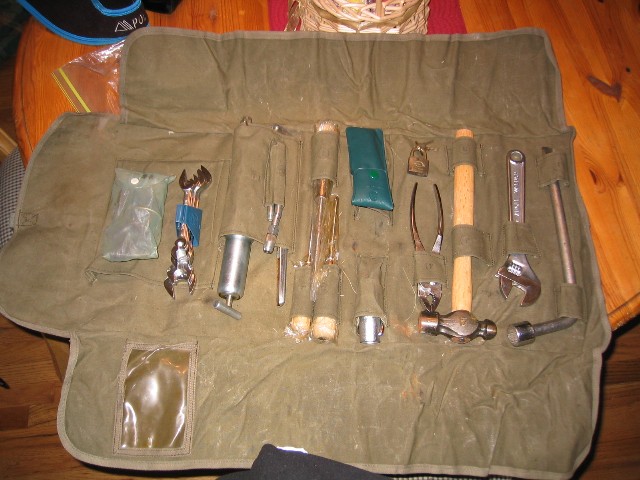 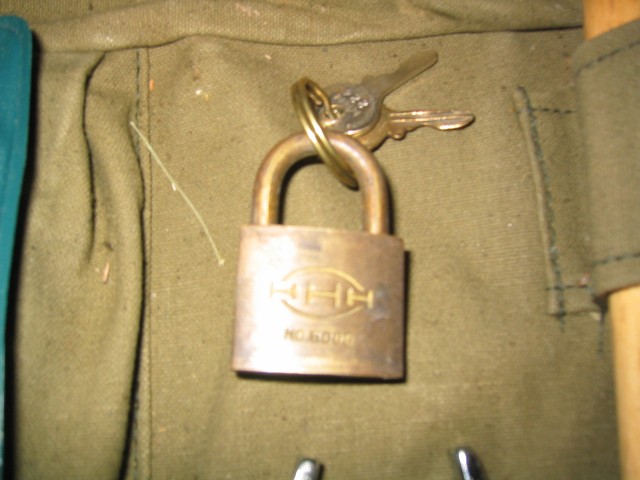 
Ed
My Anger-Management Class really pisses me off

Glad I could he'p you out.

My Anger-Management Class really pisses me off

The lock goes on the toolbox lid. It was optional.

And I'll reiterate again. YOU suck!

Wes, was this in the truck..........or did the original owner pull it out of his sock drawer or something?
Jim
"The FJ25 is almost humorous in its simplicity, but therein lies its beauty." Nina Padgett - Autoweek

Pretty close Jim, It was inside in the closet but going to my sock drawer next to the HK

I finally talked to Bill the original owner afer a few months and asked him about what ever happened to the original tool kit? He said oh I have it in the closet... He must have known how valuable it was. He said we could "work" something out on the kit as it was his only "metric" tools.. LOL

After talking with him a few times I finally stopped by and he told me some stories check out the few things I'd done to it in the short time and took her for a spin again. Finally he opened up the tool kit and said he couldn't charge me since it belonged to the cruiser and he knew how enthusiastic I was about the vehicle that took him to so many places throughout colorado and utah.

He said he knows the bumperettes and other items are still in friends garage. Sadly he said his friend has passed on like most of his other companions and he's the last one. He said we could go ever and see if the wife would let us rummage through the garage. He said we'd find all sorts of cool stuff I duno if we'll do that but I plan to go up there every so often so he can check out the progress on his old friend.

All the tools appear almost unused. Esp the screwdrivers still in the plastic. The grease gun has been used but the rest of the stuff is just about mint.

Razor said:
Wes,
that is awesome !!

did Treeroot end up with some goodies in the 60 something FJ40 he picked up in my area...I havn't heard much of that cruiser, does it run?
Click to expand...


i think the block cracked...

I have some of the wrenches in my 64

Razor said:
did Treeroot end up with some goodies in the 60 something FJ40 he picked up in my area...I havn't heard much of that cruiser, does it run?
Click to expand...

I looked around that ole couks garage but I couldn't find a tool kit or hub caps. I did find an oil filter and car kit..

pm me,
I have duplicate cards made up only change is pocket 12/13 (adjustment kit/manual) says only "miscellaneous" (for the copy kits I made up 4 years ago)

rick_d said:
g
I have duplicate cards made up only change is pocket 12/13 (adjustment kit/manual) says only "miscellaneous" (for the copy kits I made up 4 years ago)
Click to expand...

I should have guessed you'd have repro cards

Truth is a torch that shines through the fog without dispelling it. Always be true to your work, your word, & your friends, & you will never live a day without peace

The lock's for the spare tire (ie. locking to the swing-out tire carrier). I think I tossed my HHH lock, thinking it was some POS lock. oh well, I still have the tool kit (minus the combination wrench set with the nice little blue clasp to hold them together...... Damn Thieves!!!)
Cheers, Steve

The Turbocharger: a replacement for displacement.

This lock was for the spare tire Nice catch smcruisin. The owner asked on saturday if I still had the lock when looking at the spare. I need to pop off the hub cap and double check