Well, I started the tear down a couple weeks ago, and got pretty far into it before I remembered to get the camera out. I should have had it sooner to help me remember where some things go when I put them back, but... I am labeling parts as I remove them, so that should help.

The mule is down to tub, chassis and engine/gearbox now. All the other major and most minor parts are off to the panel beater (body shop) to be stripped. That is a job I am doing only on the small parts myself. The big stuff goes to the shop, since I want to see shiny metal (and minimal rust) before the Rust Bullet goes on. Stripping is done by hand here - scrapers, occasional applications of solvent, and sandpaper. No power tools used, so it's slow going right now. I'm waiting delivery of the Rust Bullet from S Africa, so not in a hurry yet. The RB should arrive about mid-January; $65/pint. Not nearly that expensive in the US, but I was just glad to find some, since things like that generally are unheard of here. I looked into shipping from the US directly, but it ships as hazmat, takes about 1 month by air or 3-4 months by sea, and costs... well, around $65/pint, so I just decided to go with what was already on the continent.

So far, knock wood, only one broken bolt, which I was able to finally remove without drilling. At the rate I'm using penetrating oil, the oil companies should never run out of money

I'll be back here often looking for advice, and posting photos as the work progresses. I have about 6 months to get this done and have the mule running again.

Good New Year to all!

Wow. Restoring a cruiser in Malawi! And I thought I was hard-done-by here in New Zealand. I can only imagine the extent of your supply difficulties.

Good luck and I can't wait to see the "Blue Mule".

A small idea of where we are starting from. These pics are in Huachuca Canyon, AZ around 2001/2002. My wife is as young as ever; I've aged considerably since these were taken 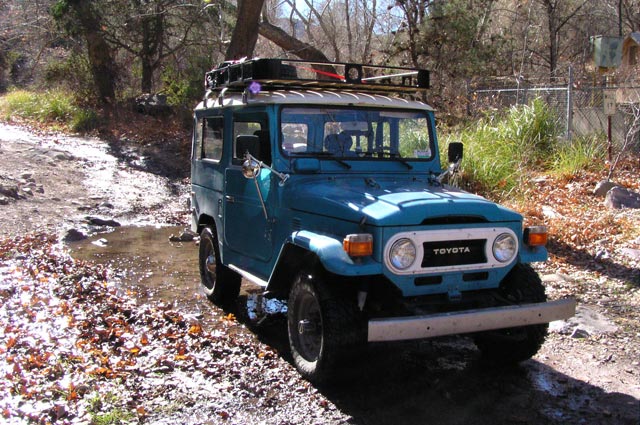 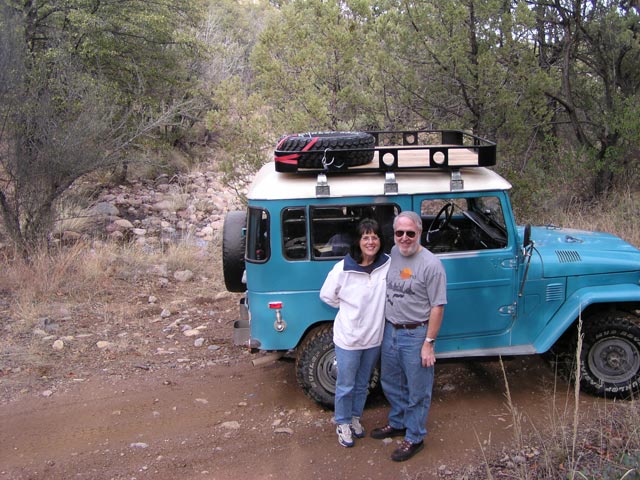 The mule was resprayed before we went to Bulgaria (04), since we knew the weather would be a bit worse there than southern AZ and Mexico. So - Maaco. Never again. The paint was done badly, twice, and was falling off the truck within a year. 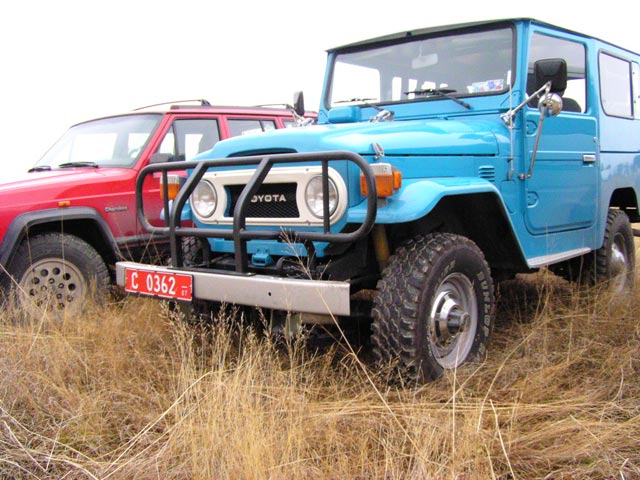 Finally (Jan 07) we are in a warmer, but hardly drier, climate again. Here is the mule in my wife's favorite configuration - no top, no doors - and working for it's fuel. She was hauling tobacco stems for the garden. That's our gardener doing the hard labor. You can see the long range fuel tank (goes under both seats) - deinitely good to have here. 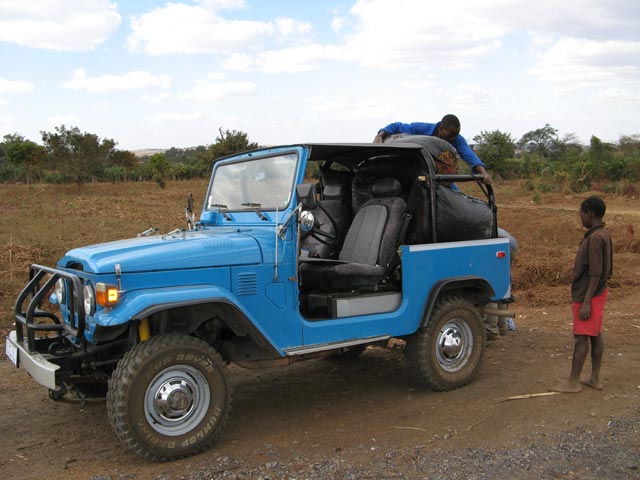 What you all were waiting for... 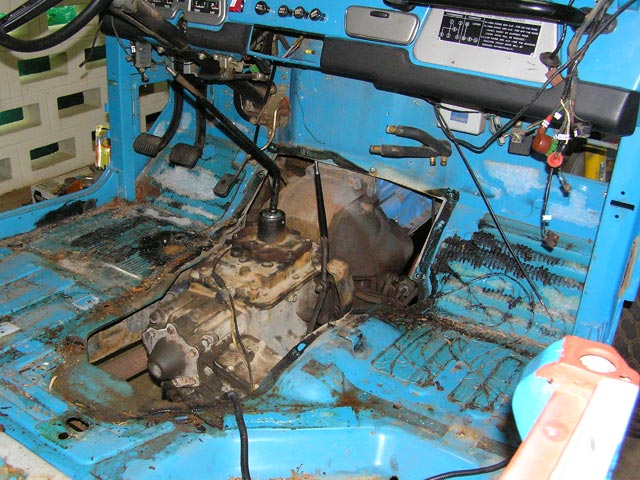 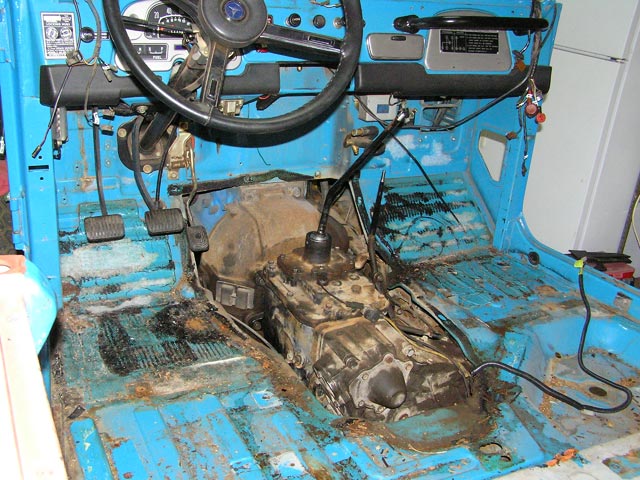 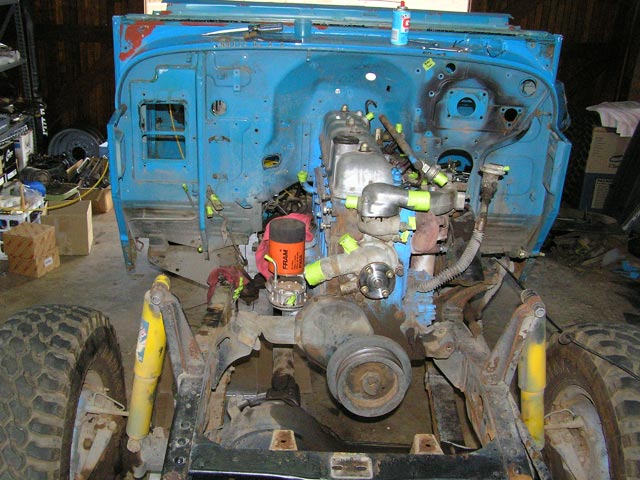 The big pieces almost ready to go to the panel beater. 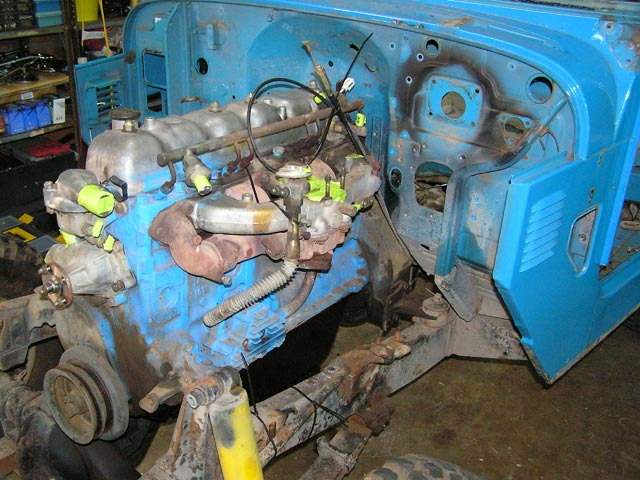 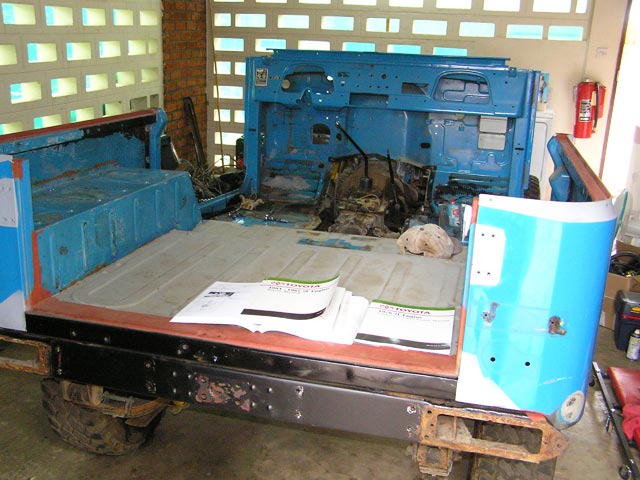 I'm a little envious of your BJ. But only a little - this FJ has been a solid performer. Only drawback here is that it's "wrong hand drive".

Toyota color 854 - "Sky Blue" What other color is there? My daughter took to calling it "Smurf Blue", which I also like.

Since I have diplomatic pouch privileges, getting the small stuff has been pretty easy. Getting the large stuff is a pain in my backside, but with enough patience, it can be done.

Welcome to mud, nice to see another 40 on the continent

A group of us have just bought 7 into South Africa from Aus, as they were never sold here Please let us know if we can help sourcing anything from SA for you. Maybe one day when my resto is done I will drive up and visit

BTW, where did you find RB?

I've been repainting mine (little bits at a time) and it's weird that the new paint matches the old 28yr-old-paint perfectly in my case. (And my vehicle is permanently outside in the weather too and our sunlight is very harsh. I would have expected the old paint to fade!)

The earlier pictures of yours look so much like mine that it is really uncanny.

No-one could say you lead a boring life with your travels. Bet you have many exciting experiences to tell over a beer or two!

and thanks for the photos!

Teebag said:
Welcome to mud, nice to see another 40 on the continent

A group of us have just bought 7 into South Africa from Aus, as they were never sold here Please let us know if we can help sourcing anything from SA for you. Maybe one day when my resto is done I will drive up and visit

BTW, where did you find RB?
Click to expand...

Baie dankie! Ek is bly, terug in Afrika te kom. But I haven't spoken a word of Afrikaans in 23 years, so pardon my clumsy attempt

I was able to source a bit of RB from Norbolt. They are located in Richardsbaai; the proprietor is Kas vd Merwe. If you and your mates are interested in buying some, he will work with you. If you can get a bulk purchase going, it will be a good bit cheaper, since the shipping cost will be spread out amongst more than one buyer.

What models of LC did you import - BJ or FJ? Not wrong-hand drive like mine, anyway.

I'd be happy to meet any of you here to swap lies and admire Cruisers. Let me know if/when you plan to come this way!

I've been repainting mine (little bits at a time) and it's weird that the new paint matches the old 28yr-old-paint perfectly in my case. (And my vehicle is permanently outside in the weather too and our sunlight is very harsh. I would have expected the old paint to fade!)

The earlier pictures of yours look so much like mine that it is really uncanny.

No-one could say you lead a boring life with your travels. Bet you have many exciting experiences to tell over a beer or two!

You are right - Maaco didn't quite match the color. But I ran out of time and couldn't get it sprayed a third time. The panel beaters here in Lilongwe are doing much better at matching the color. the biggest variation now is that the new paint is much smoother & shinier than the original. Mine had faded quite a bit in the AZ/Mexico/mid-east sun, and most of the paint on the top of the hood (oh, OK - bonnet) had burned out before it was redone. Some of the difference may be the photos, too. The Maaco job was close, but not the same. The new paint is pretty much exact.

As I told my spousal unit when I proposed - she might never be rich or famous with me, but she would never be bored. So far, I've managed to deliver on that promise

Not bad, but I am a Kiwi living in Cape Town, so my afrikaans is prob worse that yours

At the panel beaters - the crew stripping the pieces I have already delivered. Note the safety shoes, etc.

Fortunately, my rust isn't too bad, so skraping and hand sanding will take care of most of it. The tub and frame will be pressure washed before skraping and sanding; wire brushing will will also be done, but not with power tools, except what I do myself. The shop foreman is looking for wire wheels he can use with the angle grinder for working on the frame and axles, but we're not optimistic he will find any in country. I may have to import some for him from S Africa or the US. 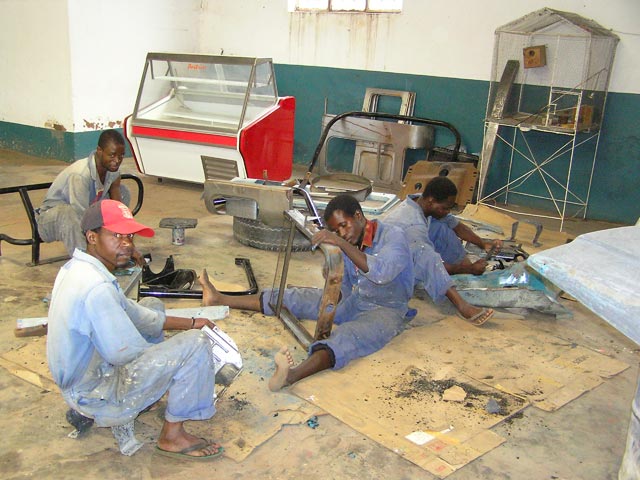 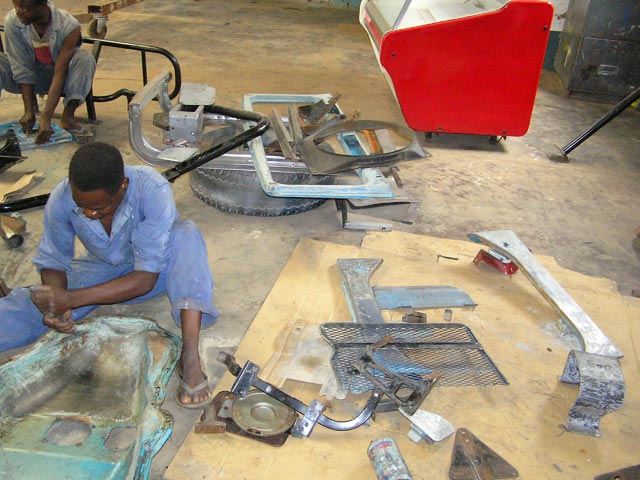 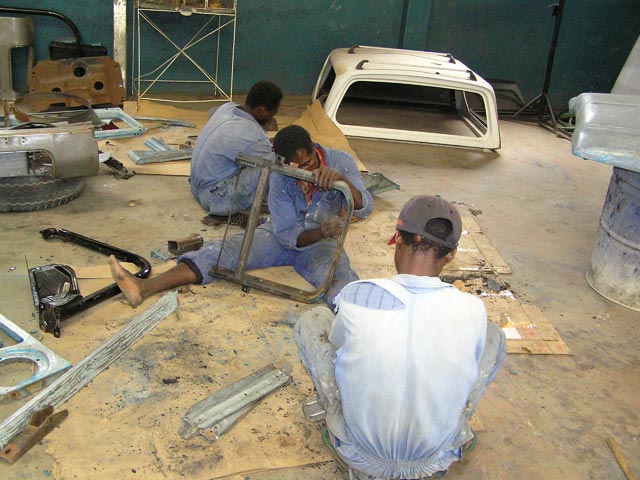 When they are thru, this piece will be shiny metal. Any rust left on any piece will be the pitted areas where hand sanding can't lift it. That's what we want to use a grinder with wire wheel for. So far, there have been only a few small spots where the rust did not come up with sanding. That will not be the case with the frame, especially the boxed areas. This is my real concern, but if we can get all the loose stuff out and treat it with Rust Bullet, it should be okay. Inspection so far shows the rust, even inside the frame, is not serious. The only really bad spot is the rear sill - that will be cut and patched.

Today, with luck and some extra muscle, the tub will come off the chassis. It will be pressure washed (all sides) before going to the panel beater. The chassis will also be pressure washed and once I've completed a few more removals, that will go to the shop as well. There, the engine and gear box will come out, axles off, spring packs disassembled for cleaning and repainting. Now if that Rust Bullet will just get here from S Africa - should go in the delivery truck late tomorrow or Tuesday; arrival in Lilongwe by 21-22 Jan with luck. Here's hoping! 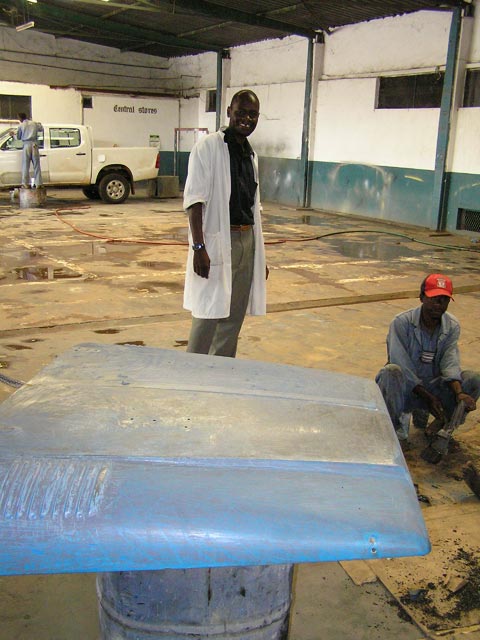 Tuesday or Wednesday, I'll turn it over and pressure wash the bottom before it goes to the panel beater. 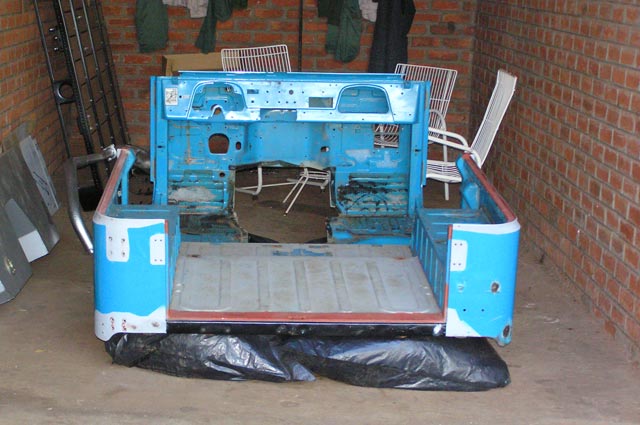 The chassis. Not bad - no serious rust anywhere. A few more bits to take off, then I'll pressure wash the frame, engine, gearbox, and then send this to the panel beater. Progress! 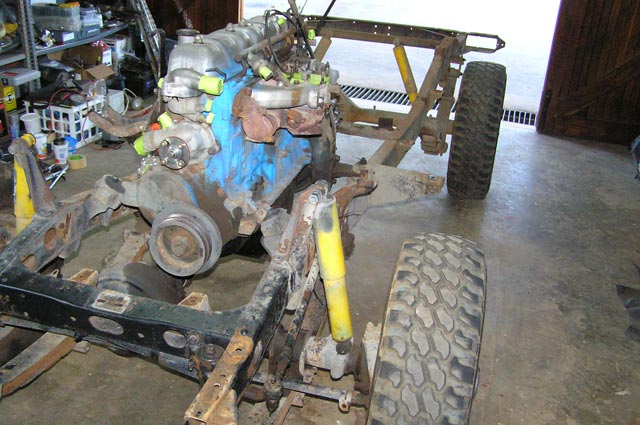 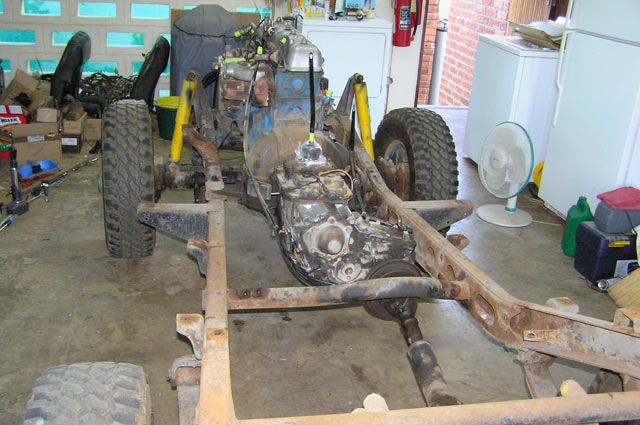 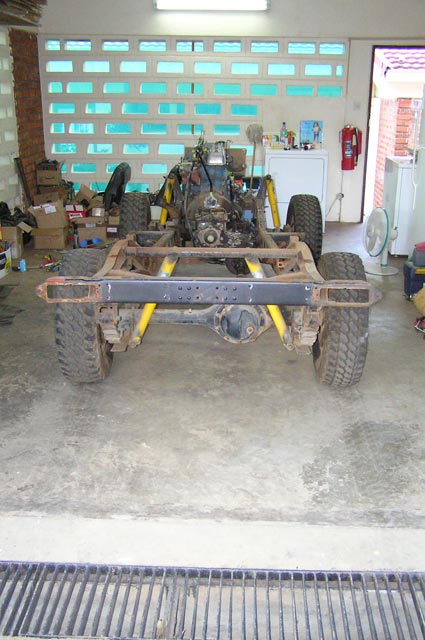 Looks good and keep it up

Great thread, thanks for sharing with us!

Looking good, keep it up

Contacted Norbolt and they no longer import RB