[UPDATE] I started this post to document the construction of the addition to the original workshop, but have changed the title to include "and updates" as I've been documenting various updates to the original workshop as well. I originally built the workshop in the late '90s, but it hit some roadblocks due to a divorce and career changes. About 2010 I started making more effort to get back to working on and in the workshop and in 2012 started on the addition. Since then I've been making a point to be able to spend more time out there. Particularly since 2015 when I started dating an artist who (nicely) demanded her own space for wood carving, clay sculpture, and other artwork. Unfortunately, she left at the end of 2021, which was another setback.

I've been meaning to do this for awhile, but the Borough forced my hand. I found out that they were updating their Zoning Ordinance and one of the "updates" would limit the size of detached structures. So I was able to get my plan approved before the new regulations went into effect.

The current workshop has automotive and metalworking on the first floor and woodworking on the second floor. The new addition will have a single 9'x9' overhead door to match the two existing doors and will have a covered alcove at the existing man door with a man door into the new section too. The two sections won't be connected because I plan to keep the "dirty" activities in the new section to isolate them from the "clean" parts of the existing shop.

I was all ready to start excavating, but Sandy delayed that a bit. Hope things have dried out enough by tomorrow to start digging. 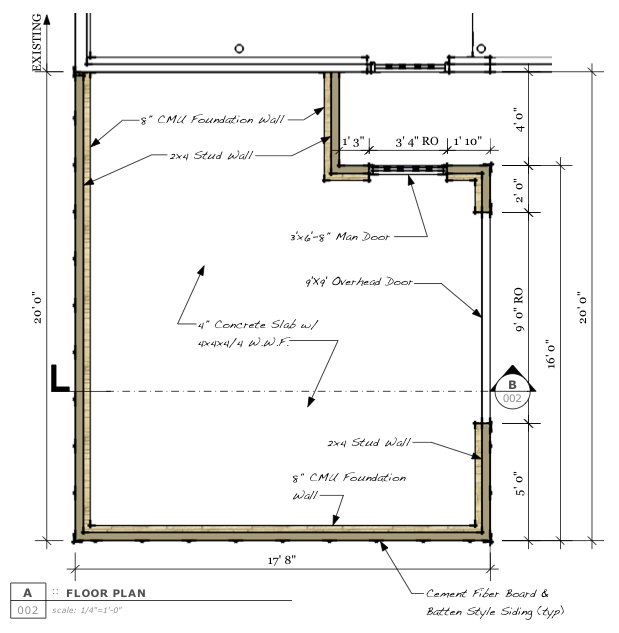 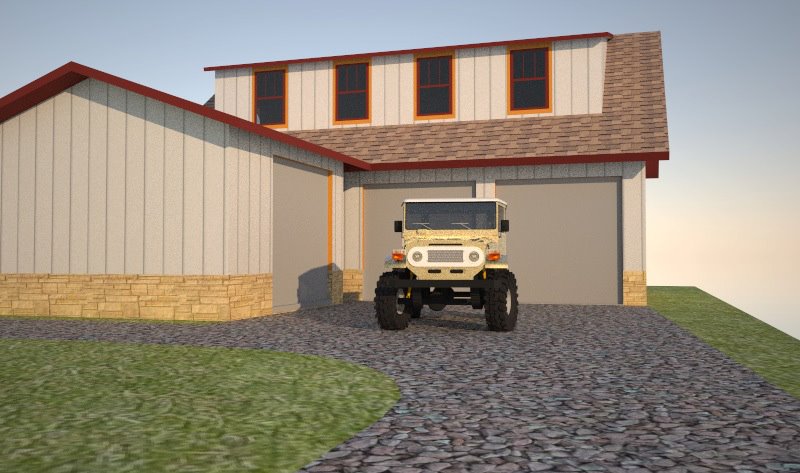 Congratulations on the expansion. Will you have a build thread on garagejournal.com too? (I did a quick look but did not spot one)

My concrete pour was also delayed by Sandy but for a different reason. I was in NYC last weekend helping my daughter find a sublet and then move her in. Now I am back and spent yesterday getting the prep work done so I can pour next weekend. Good luck with the weather and looking forward to seeing pictures of your shop expansion as it comes together.
Larry Downey
Kennesaw, GA
1986 BJ70, 1981 FJ40, 1995 FZJ80
1981 FJ40, 1986 BJ70 (Projects)

Probably won't be posting to garagejournal. I haven't been very active over there for quite some time.

It's still muddy, but got some work started today getting the topsoil cleared off. 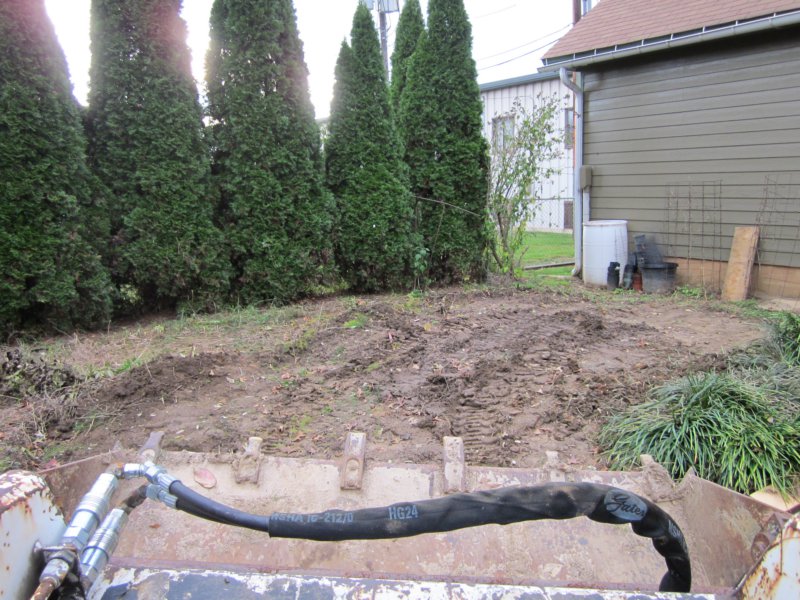 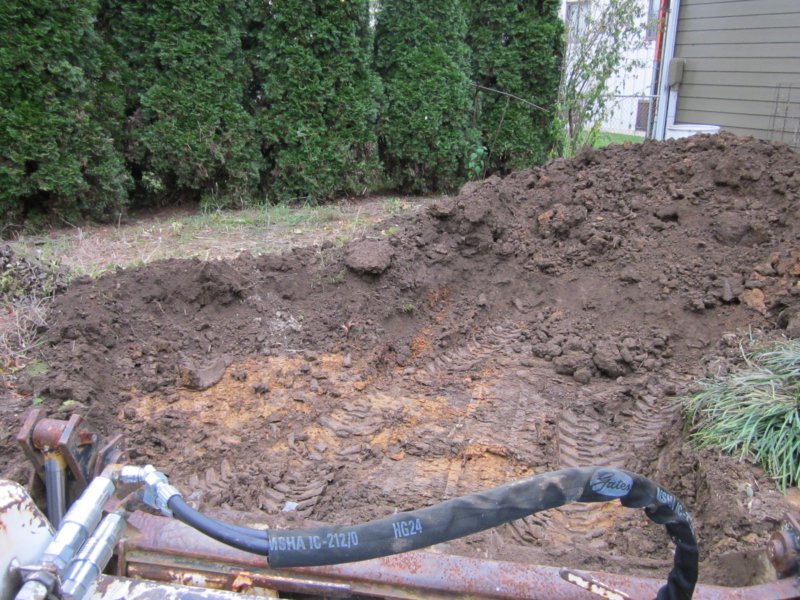 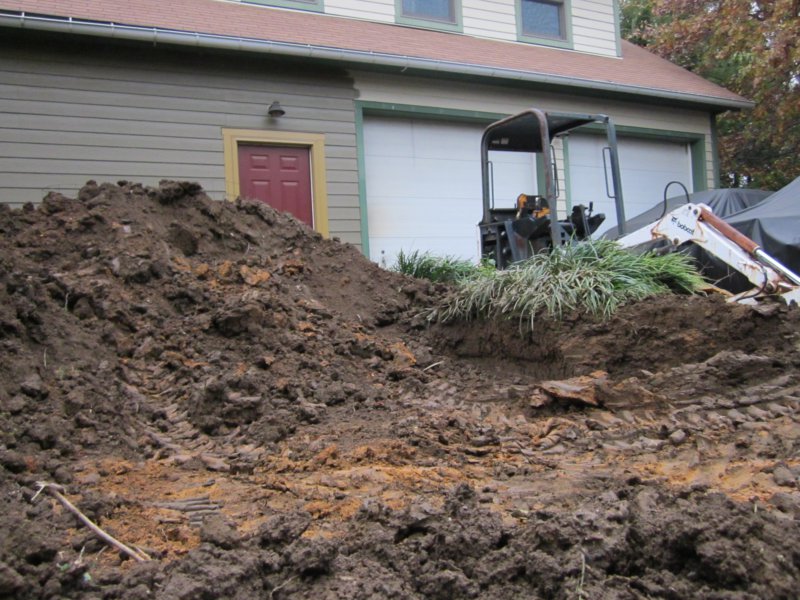 you might want to consider going to a wider door....especially since you will be turning out of it. A little extra width will never hurt.

Are you doing preman trusses or are you stick framing the roof?

The two existing doors are the same size. For what I'll be using it for, it will be fine.

Will be stick framing the roof so that I have the clear height inside.

I'm a registered architect, so I have the official stuff taken care of.

Please show us the equipment being used for this project. I'd like to build a shop soon and need to get a handle on what type of equipment to rent/use!

Made some more progress this weekend. Started the trenches for the foundations.

Dug down along the existing foundation wall (first picture).

Turned the corner and along where the new man door will go (second picture).

And turned the next corner to start along where the overhead door will go (third picture).

Corners take more time between moving the excavator and getting the corner all dug out straight. Straight lines go a lot faster. 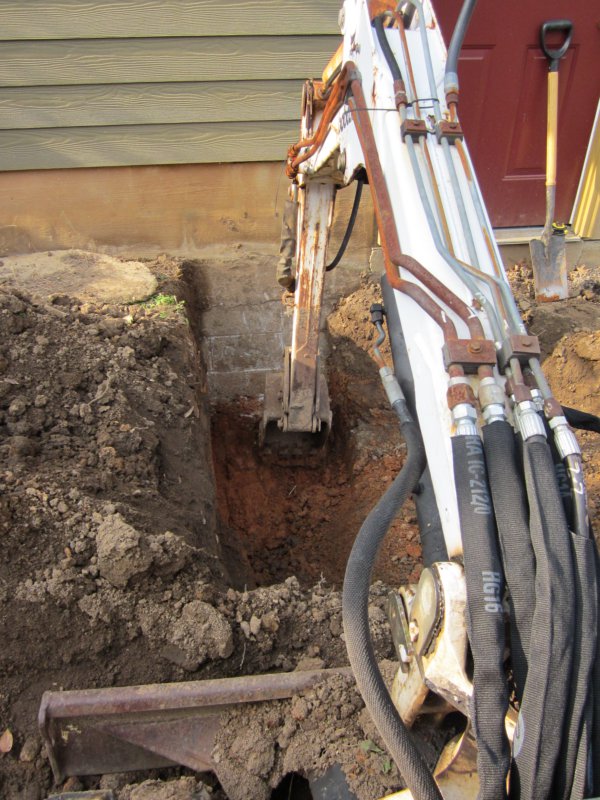 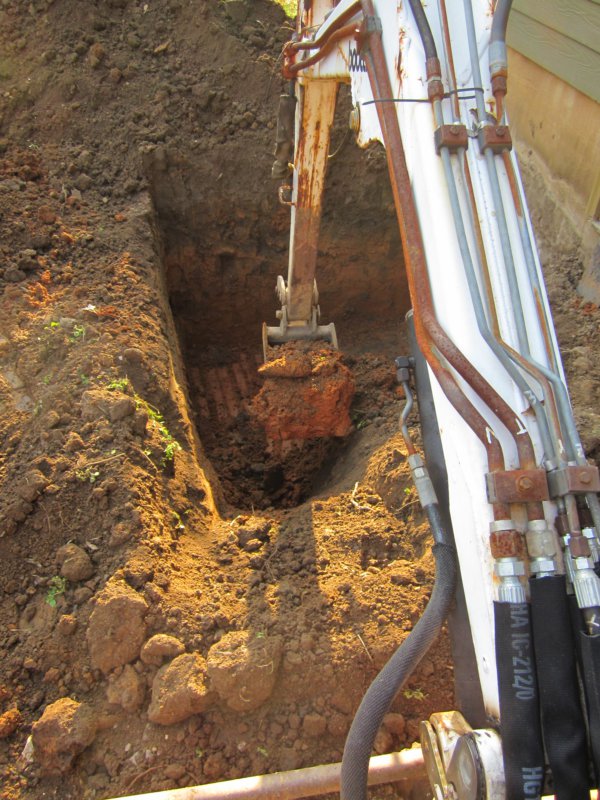 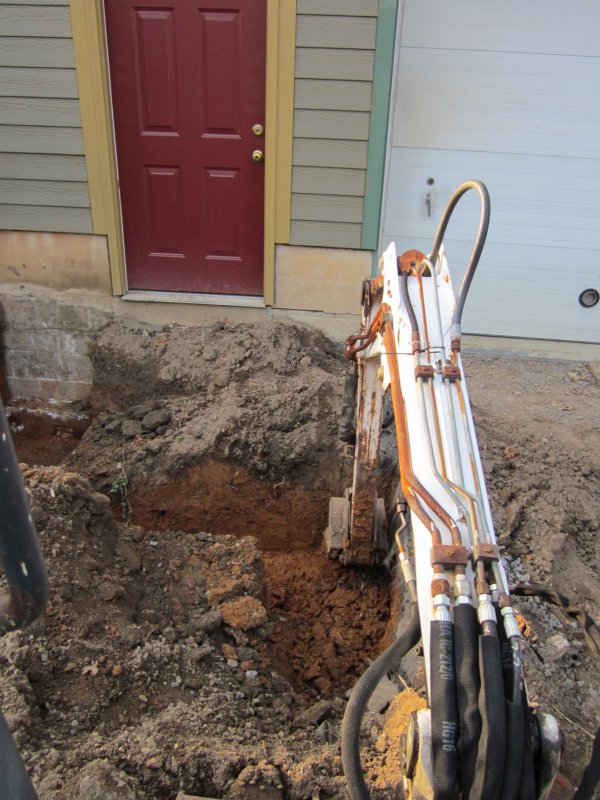 Finished the day out today by removing a Rose of Sharon that was in the way. Man did that thing have a tap root on it! Then there were all the shoots that had come off the main one. My word of advice for the day is to never plant a Rose of Sharon if you ever think you might take it out again! 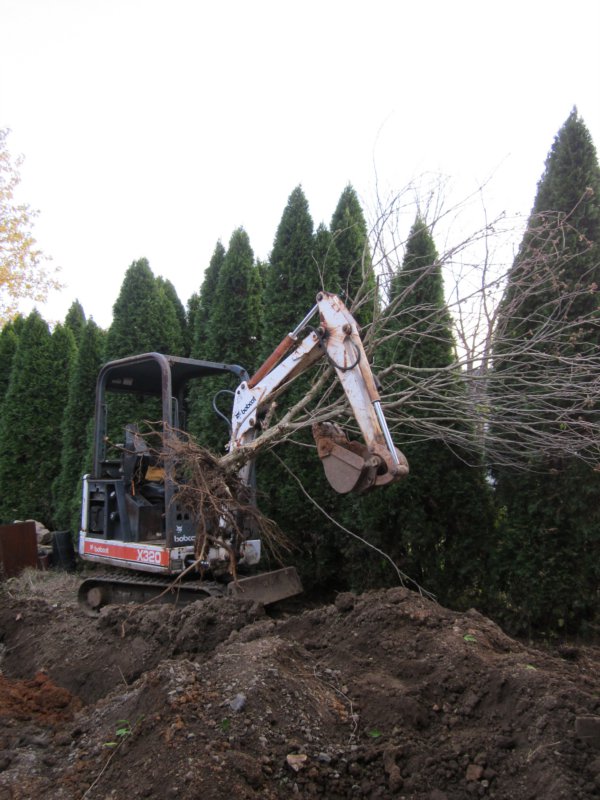 Slowly making progress as I have time. That it now gets dark before 5:00 pm really cuts into the available time to work. I should have considered springing for the lighting package for the excavator...

This is the back wall of the extension. When I first started looking into this, I talked to a guy with a TLB (tractor loader backhoe) and he pretty much said that between having the line of bushes (arbor vitae) and the electrical supply it was undoable to put a foundation wall in here. Basically, I'd have to take out the bushes and move the wall over to clear the electric.

I've been getting pretty good with the controls of this thing. It takes some skill to operate the bucket, stick, and boom all together to get a flat bottomed trench - as you bring the stick in, you have to curl the bucket up and raise the boom until you reach the mid-point of the swing and then start uncurling the bucket and dropping the boom as you come back to the machine. It is a bit of a challenge to master with the joystick controls. I have a newfound respect for the guys who used to do this with the old backhoes with separate levers for each cylinder!

When I built the workshop, I hadn't really thought about expanding it - hence the electric is where it is. It seemed to be out of the way at the time. If I had thought about expanding, I could have put this wall in with the rest of the foundation walls and it would have just been a garden wall. I did have the foresight to put the electric in a conduit in case I did have to dig near it. Much easier to work around than the bare cables.

As an aside, notice that the underground portion is 3" (what was required for the wire size) and then transfers to a 4" conduit before the two 45° bends and up the wall to the LB box. This allowed for much easier pulls through the conduit and more room in the LB to feed the wires through the wall. 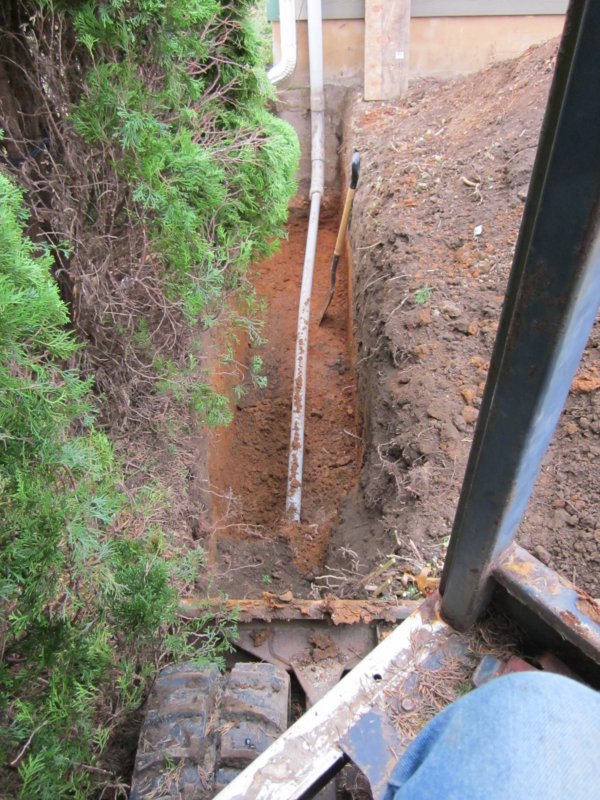 Typically, the issue that pits run into are with insurance. That's why you don't see them much anymore. The argument is that they can hold flammable/explosive vapors (heavier than air) when you're dealing with gasoline powered vehicles and such. You get into a whole bunch of ventilation issues if you go that way.

Down to the last corner. Going to finish that up today before Thanksgiving dinner! 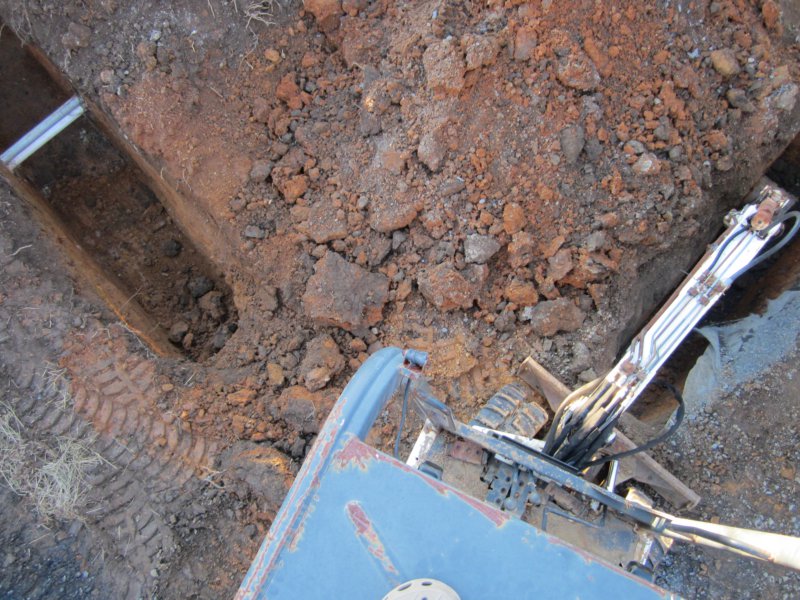 Had a bit of a setback this week. We got enough rain on Tuesday to wash some debris into the trenches and mud things up. Scraped the slop up for most of the trenches, but an area around the corner shown above was still a mess and I didn't feel like digging another foot of clay out. So I picked up some 50# bags of lime, mixed that into the slop, rented a jumping jack tamper, and consolidated things.

A century and more ago, they'd make mortar out of lime and sand. Portland cement mortar is a fairly recent development. The lime soaks up the moisture and consolidates things. Plus, once compacted, it is less likely to absorb new moisture.

Ok, moving along again. Footer inspection was this morning and everything passed. The guy seemed surprised that I knew what I was doing - particularly the rebar and that I had geotextile fabric under the existing stone driveway. He said few people did either one and commented that with a block foundation wall, if the footer settled it would just crack along the mortar joints. My reply, "But I don't want it to crack..." Reinforcing is cheap insurance. For a couple hundred bucks I can be sure nothing is going to settle.

As I mentioned, I ran into some issues with the wet weather making a mess of things. Mixed a few bags of lime into the slop and compacted it. That also helps future water penetration. Subsequent rain has just pooled on the surface at the bottom of the trench and can be mopped up. First picture I am lifting the tamper out of the trench at the end of the day.

The other shots are of the rebar. Three #4 bars continuous with #4 cross bars at 24" o.c. all tied together and set on 2" chairs. Also doweled into the existing foundation. Overkill, but as I said, cheap insurance. 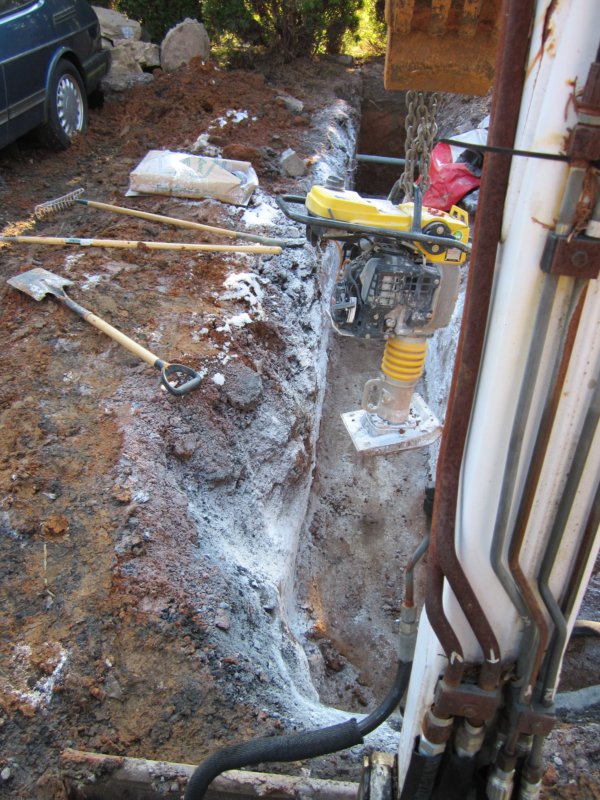 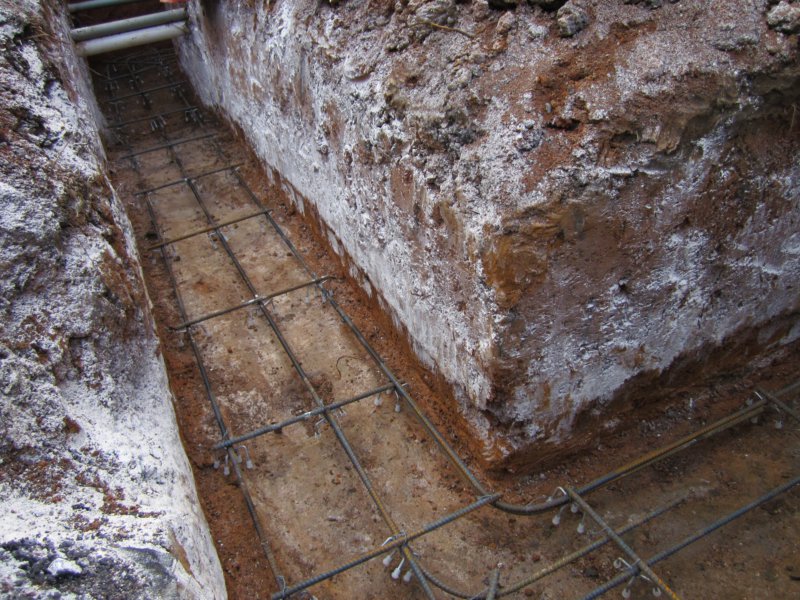 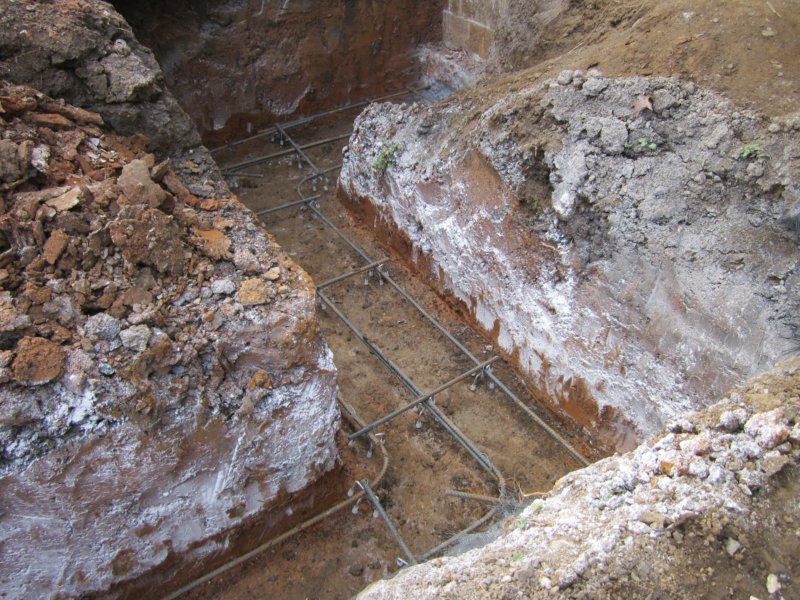 Pretty neat that you're not using any forms. But how will you level the footing?

I've seen that in areas were footers are shallower, they just dig everything to the same depth and then use forms. Bottom of the footer needs to be a minimum of three feet below grade around here, so that would be a lot of extra excavation. I also see forms used when they have a basement, when you're doing the excavation anyway. But for a stemwall like I'm using it is more typical to just do a trench the proper width, mark the sidewalls for the footer depth, and pour to the line. Also saves me the cost of renting forms since I'm doing this myself.
GET INVOLVED - Join the Blue Ribbon Coalition - www.sharetrails.org
’94 GMC 6.5TD K1500 4L80E Yukon SLE 209K / '93 Chevrolet 6.5TD K2500 NV4500 Std. Cab Longbed 183K
'85 Toyota 22R RN60 4x4 Std. Cab Shortbed 178K / '85 22RE RN65 4Runner

And just to show it isn't just for small scale projects, here is a commercial project I designed that is being built. This will have a 16" wide by 24' tall concrete block wall built on it. 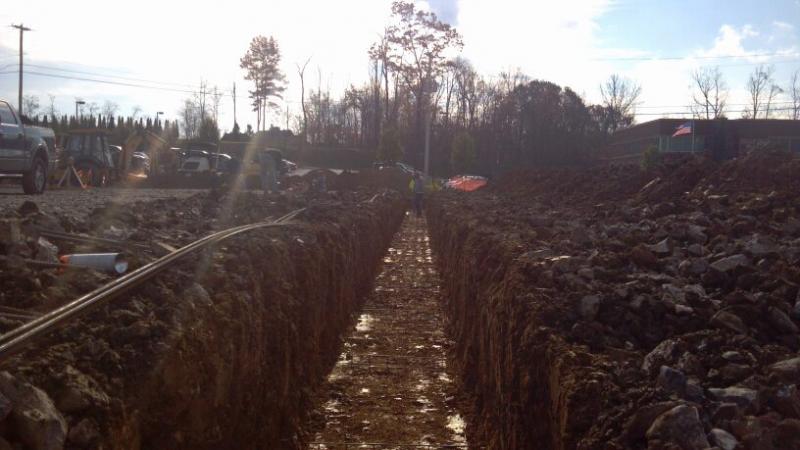 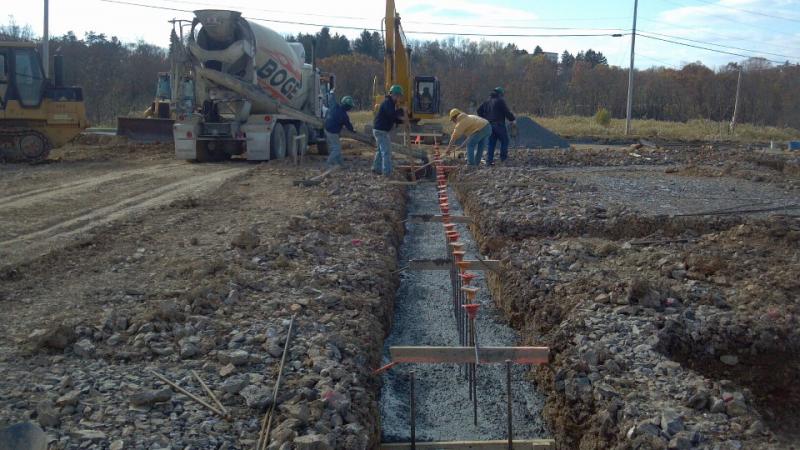 45Kevin said:
Pretty neat that you're not using any forms. But how will you level the footing?

Well maybe you will put forms in. I usually see them go in befor the rebar though.
Click to expand...


That's common around here where possible. Alot of times just tapping down a piece of rebar in the middle of the trench to the proper top of footer elevation every few feet will help.

Nice looking trench and rebar PA. That's one nice thing about clay. Sure makes a even secure trench.

PAToyota said:
Bottom of the footer needs to be a minimum of three feet below grade around here...
Click to expand...


Jeez. I've stood 18' tilt ups on less.
REPLICA GEAR SHIFT KNOBS
You must log in or register to reply here.