Disappointments today, unfortunately. Pulled all of the necessary parts to get down to the head. That all went fine, and this is an easy motor to disassemble. Plenty of room, most of the skin left on my knuckles. A life in Arizona helped, no rust to fight with.

The good pretty much ended there. My first indication that something was wrong was while pulling the manifold bolts. 14 mm working from the front, but I found the 2 closest to the firewall were a little bigger. 9/16 was a perfect fit. Studs came out instead of the bolts coming off, but no problem, right? Wrong, but I didn't figure that out until a bit later.

Moving on, as I took a better look at the head than I had when I adjusted the valves, I saw this lovely little area 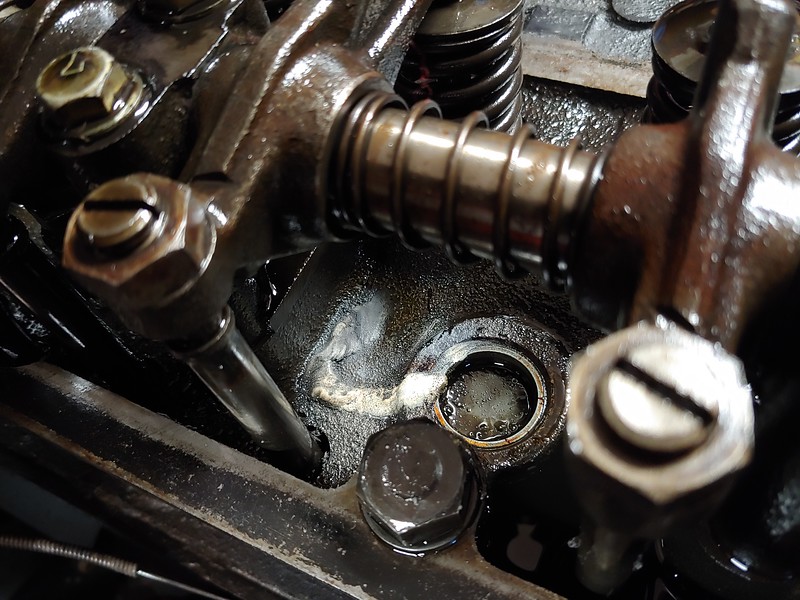 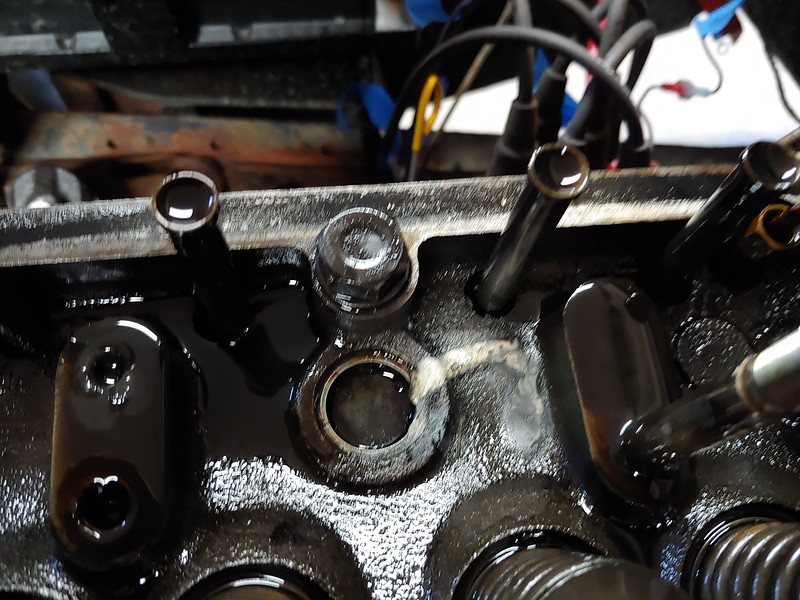 It would appear that I was not the first one to go about pulling this head...and the prior individual was a big fan of JB weld.

After a deep sigh, and the realization that this head was never going to go back on this block, I decided to start pulling head bolts and figured I would find a replacement head without too much drama. Start backing the head bolts out, and none of them had more than maybe 40 ft/lbs of torque. I guess the prior "mechanic" was afraid to stress the JB weld crack repair. Shady shade tree.

Loosened all of the bolts the whole way, and decided to have a beer and take a break. My buddy who was along for the ride and to help lift the monster out mentioned that the second we broke the seal, I had a non-running rig until everything was done, including finding the mystery head. If we bolted it back together, at least I could move it around and get it on a shipping truck if and when my house sells in this crazy market. This man is a genius, and is worth all of the beer he consumes.

We torqued down the head bolts. I put the rocker assembly back on and promptly launched the front spring retaining clip somewhere into my garage, prompting a 30 minute hunt before it was found.

Put the manifolds back on, and low and behold, the stripped out 9/16 SAE thread bolt on the rear wouldn't capture and head and bolt appeared stripped. Of course they were. Fortunately we had made a NAPA run and had a selection of permatex gasket maker. We'd used it liberally on the old gasket anyway, so I filled the entire hole with it. We'll see, but what did I have to lose? Pretty generous use on the water pump and thermostat housing as there were no replacement gaskets to be had today. But, at least the bolts were torqued to spec!

In the end, she fired up without incident. A couple mile drive found her in no worse shape than when we started. It was a rainy day of social distancing anyway, and a good dry run for the eventual real repair. Good times.

Anyone have a 72ish head lying around, no cracks or JB weld? 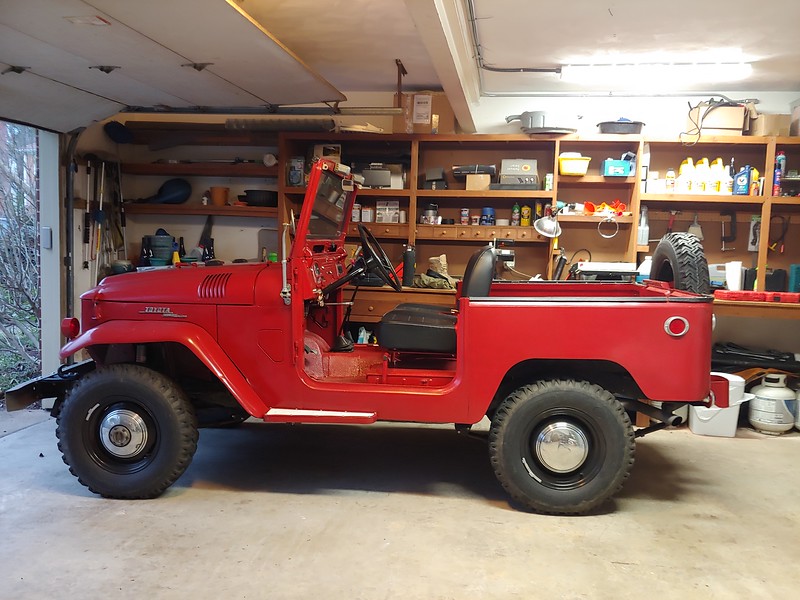 I have about 8 of those. At least one is rebuilt. 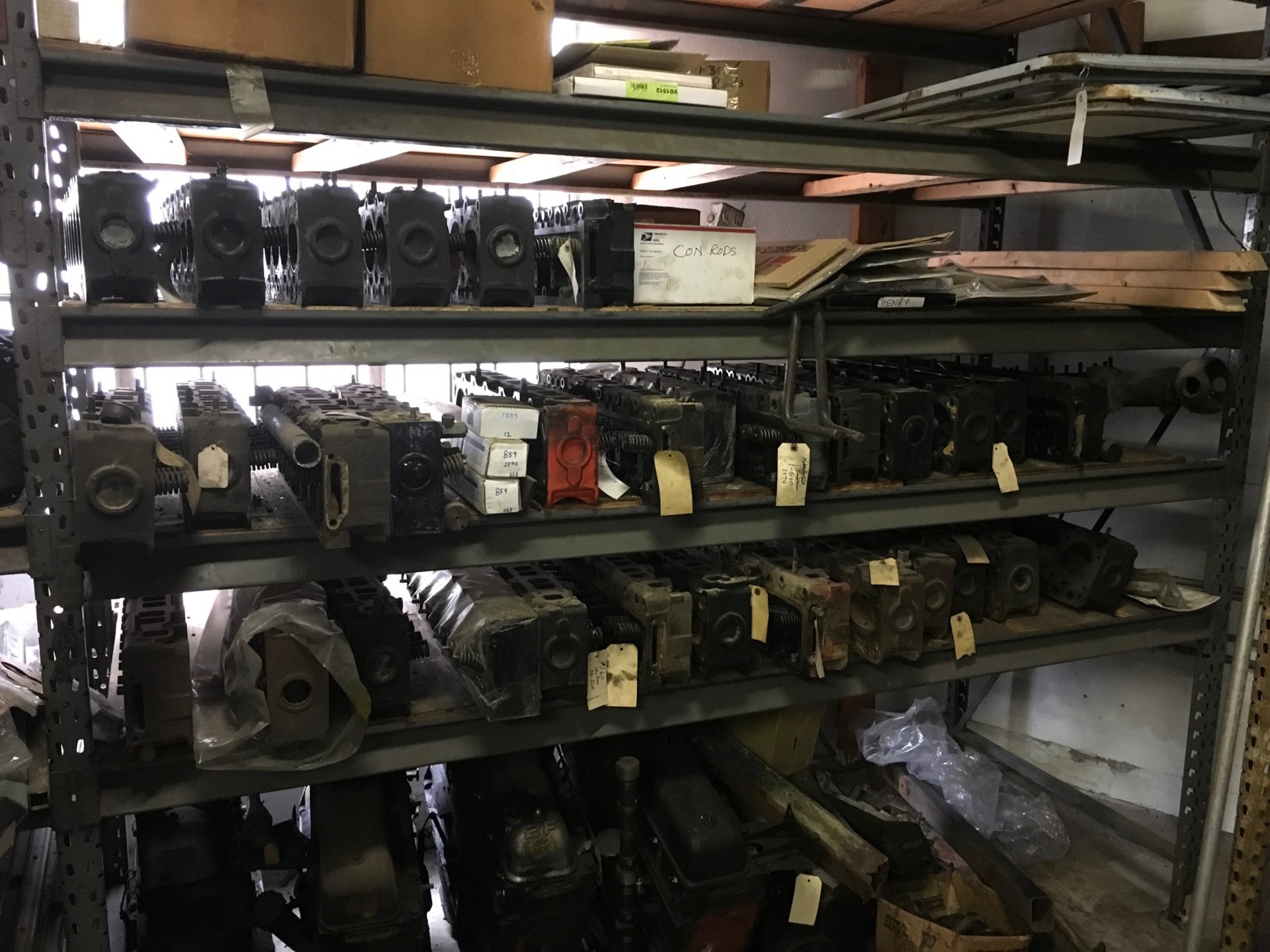 Thanks Mark @65swb45. I'm always happy to order parts from you, but not sure if the freight would make it cost prohibitive. Still, fully rebuilt and no surprises would be a big plus. If you haven't sent my order from Friday, maybe we could combine?
Last edited: Mar 22, 2020

May have found a head locally. I looked on the front of my head and found 60032 as a casting number. Head locally is a 60030. Do these interchange?

Compare combustion chambers.; I don’t remember off the top of my head. Does the 60030 have air injection ports?

65swb45 said:
Compare combustion chambers.; I don’t remember off the top of my head. Does the 60030 have air injection ports?
Click to expand...

Thanks Mark. I'll get some pics of the 60030. I was hoping to leave my current head in place until the other comes back from the machine shop, but will pull and compare if needed.

Overdue update. @matzell found me a 60032 head for a good price locally. I'm skipping part 2 on this and having him do the head for me at his shop in Richmond. @65swb45 sent me a full gasket kit, water pump and a plastic fan/spacer, so those went with it.

Since we're that far in, might as well do the rest of the needed refresh. @Tank5 had a good 3 speed cluttering a shelf, so that is now here and will go in to replace the current trans with a bad 3rd gear synchro. Rear main seal, oil pan gasket, clutch and a trans/t-case reseal while everything's out.

I forgot to take some pics, but maybe @matzell can grab a couple while she's torn down.

Cylinder head is off. Block looks good. Time to send replacement head off to machine shop. 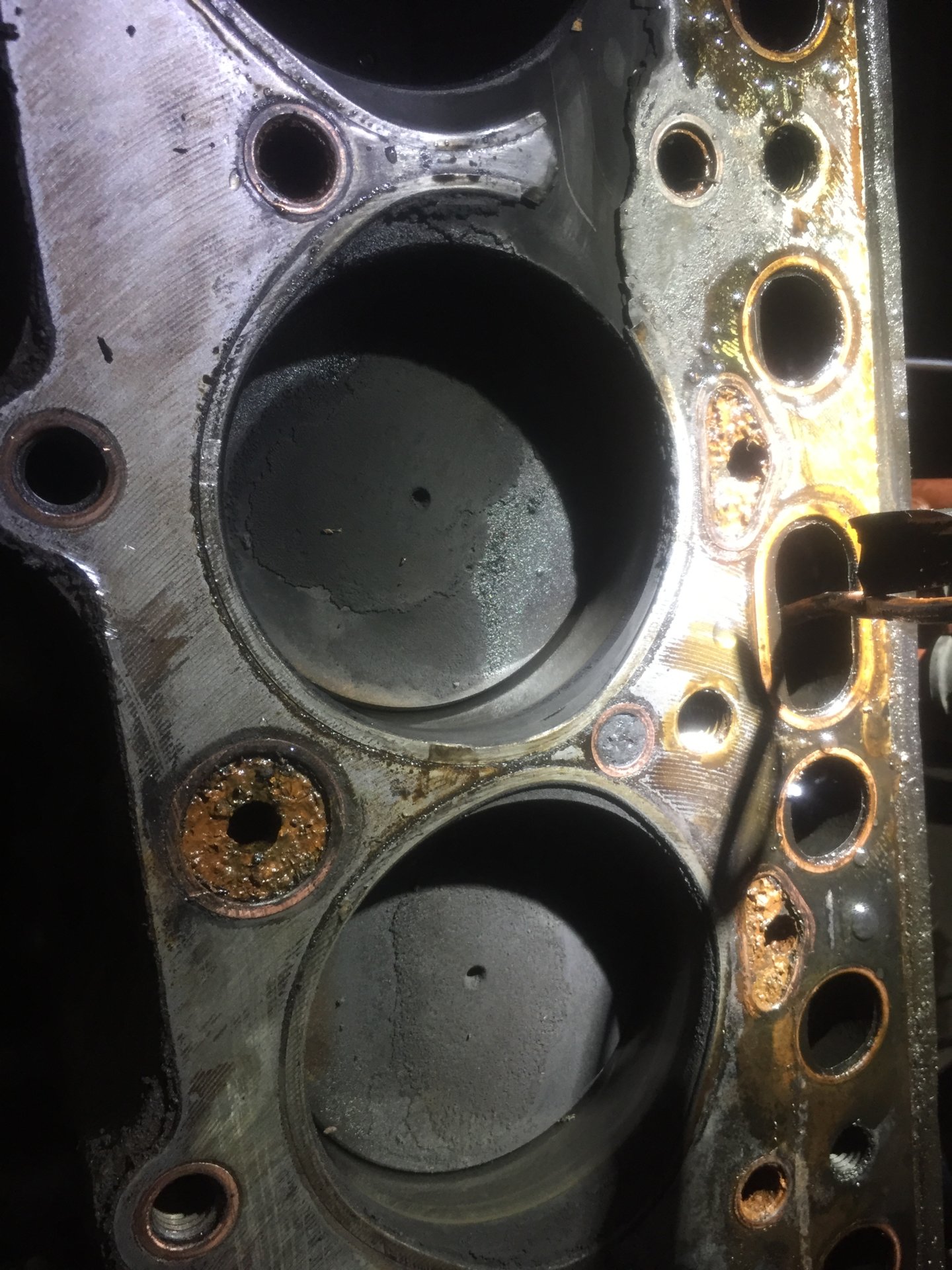 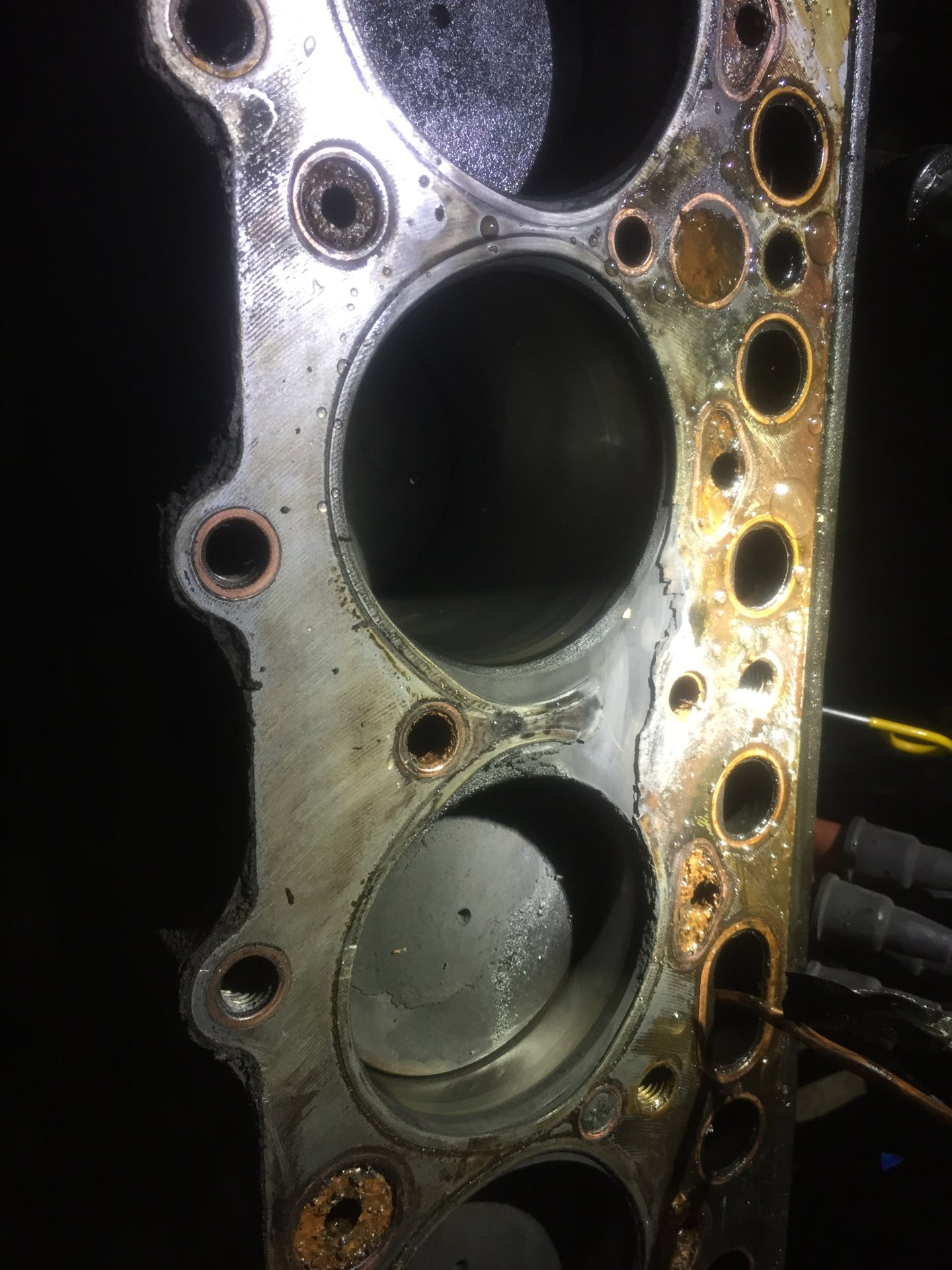 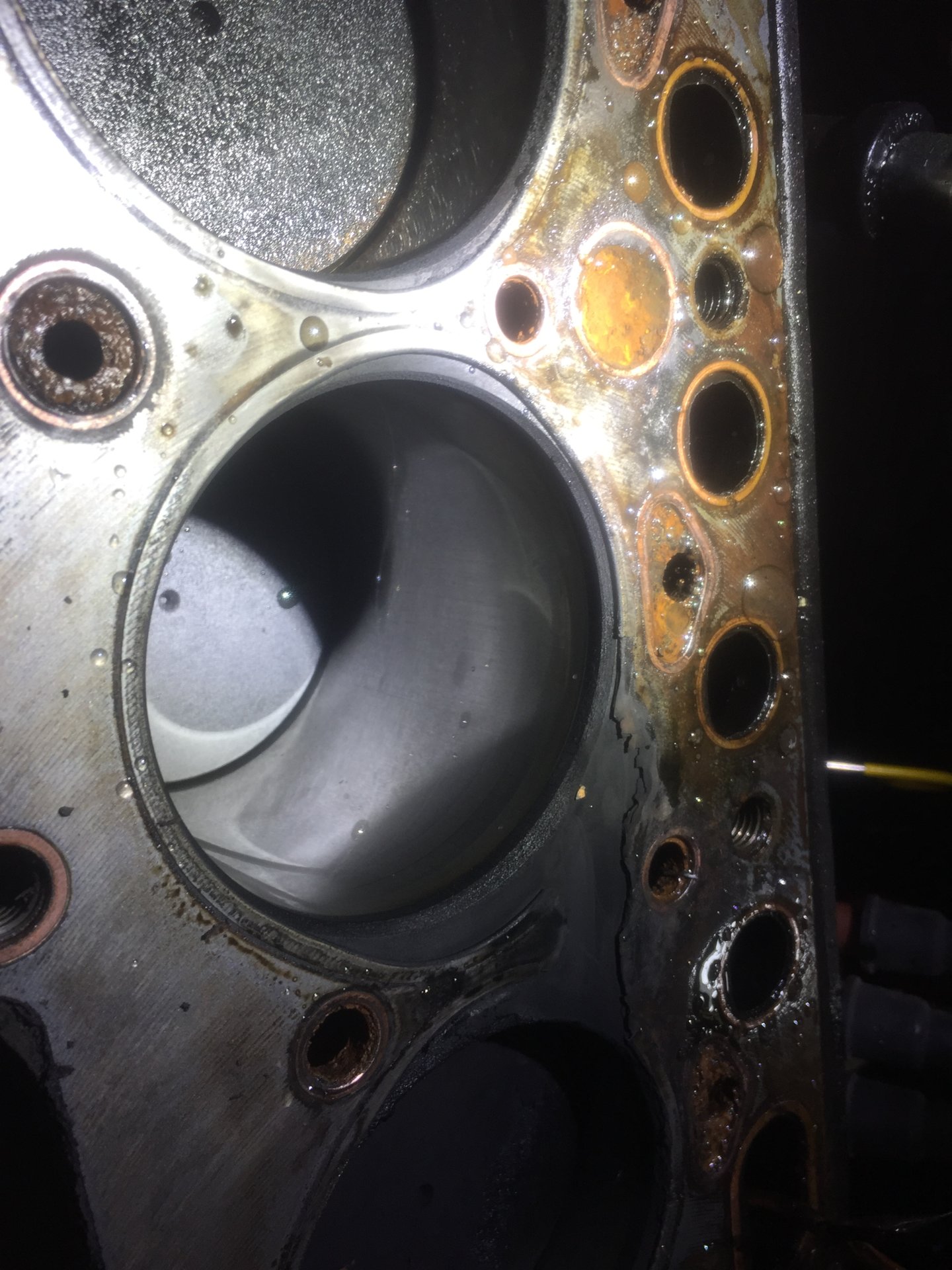 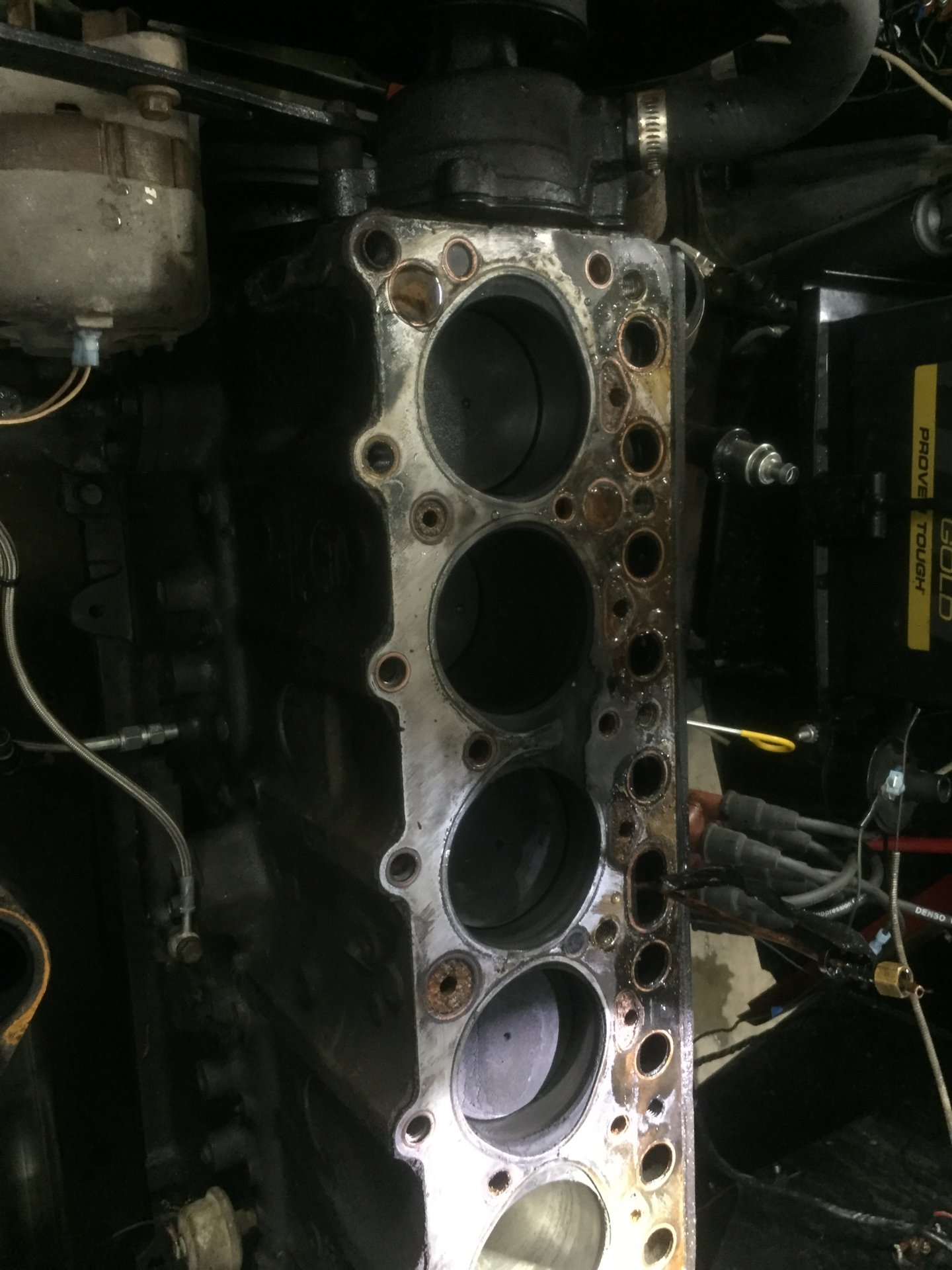 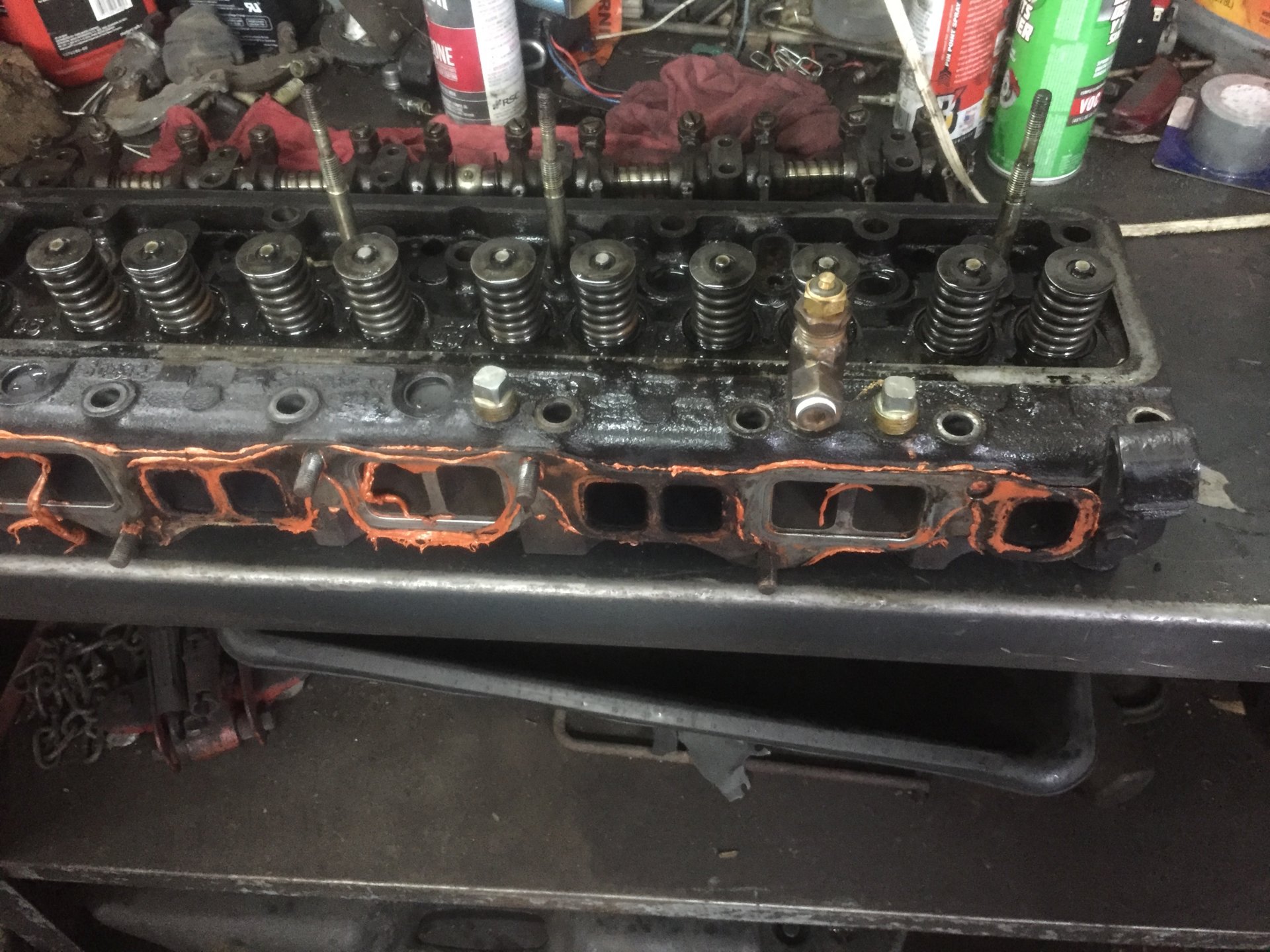 Update. Head number 2 made it to the machine shop. Unfortunately, that one had not one but 3 cracks. No love for the F motor. In the meantime, I found yet another head locally. 60031. Combustion chambers looked the same. A little surface rust from sitting in the Virginia humidity in a shed near the beach. 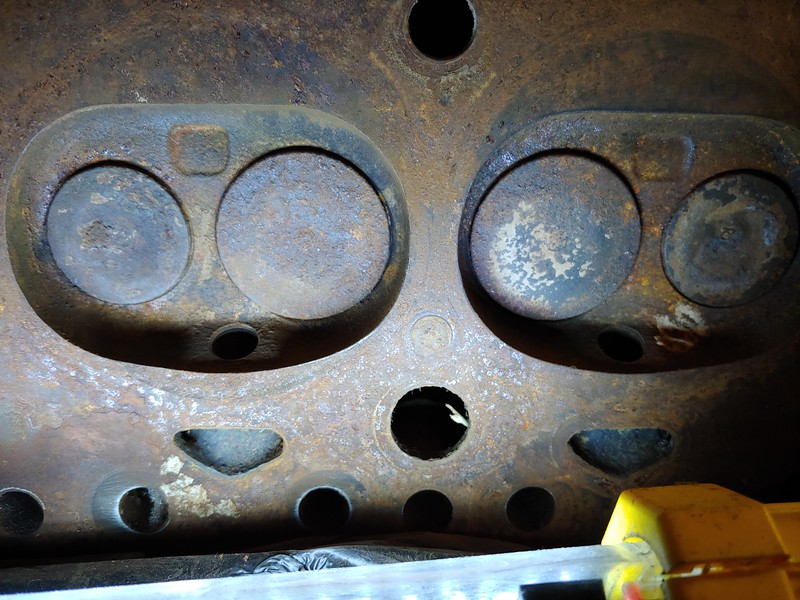 This was originally headed off to the machine shop for try #3, when this beauty showed up relatively locally. 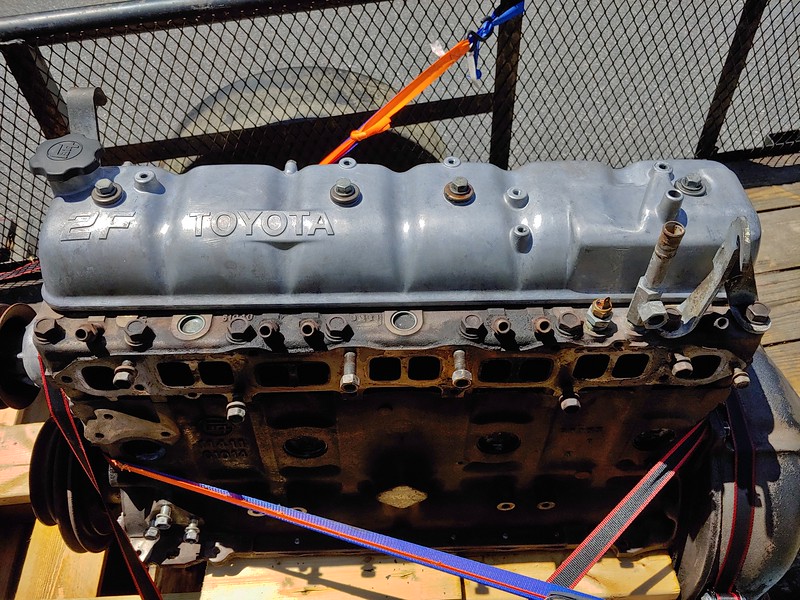 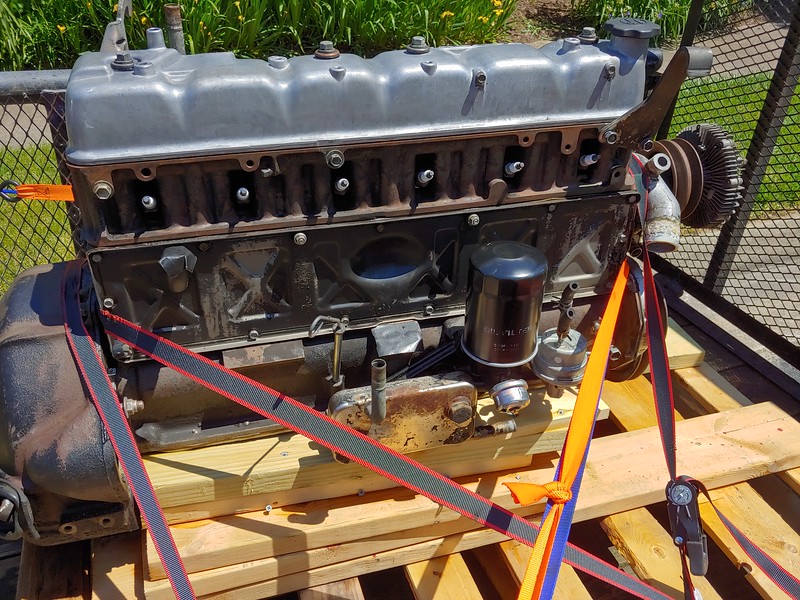 @FJ Noob pulled this out of an 85 FJ60 and it needed a new home. Looks like it lived a decent life. Oil galley plug done, fluids clean. Pics are after several rounds with a power washer.

@matzell has it now at his shop in Richmond, where my 61 has been patiently waiting. Drop in gets started tomorrow. New seals, new clutch, new water pump, fuel pump, etc. Going to dress it mostly in F motor trimmings.

Where were the cracks?

Looks good after a nice scrub down!

Dizzy said:
Where were the cracks?
Click to expand...

At least 1 involved a valve seat. The machine shop considered only 1 of the 3 repairable. Scrap now. Anyone need a rocker assembly or F valve covers?

2F striped and getting resealed before going in. A little trick I do is cover the spot welds on the inside of the oil pan with JB weld to help keep them from leaking. 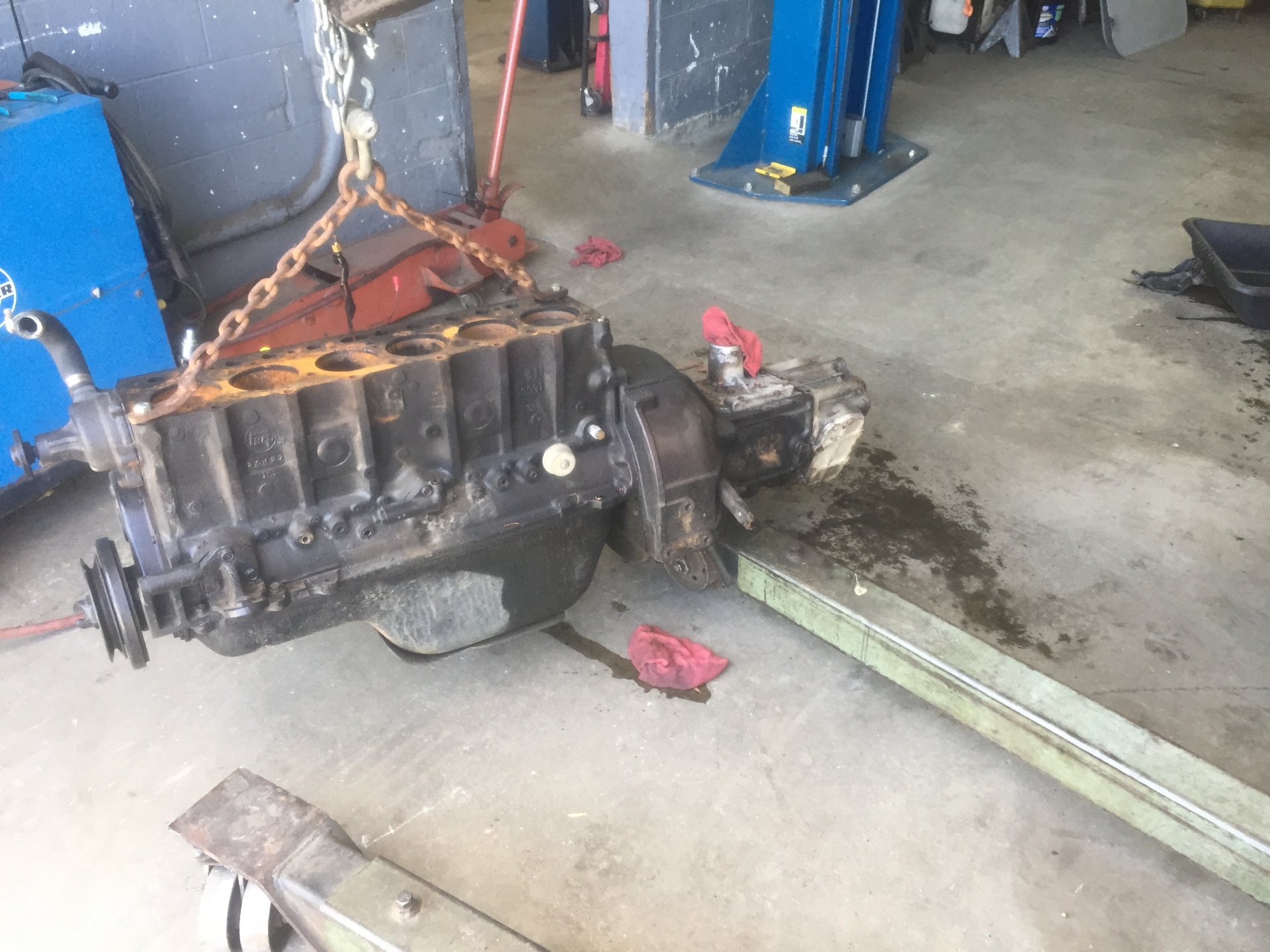 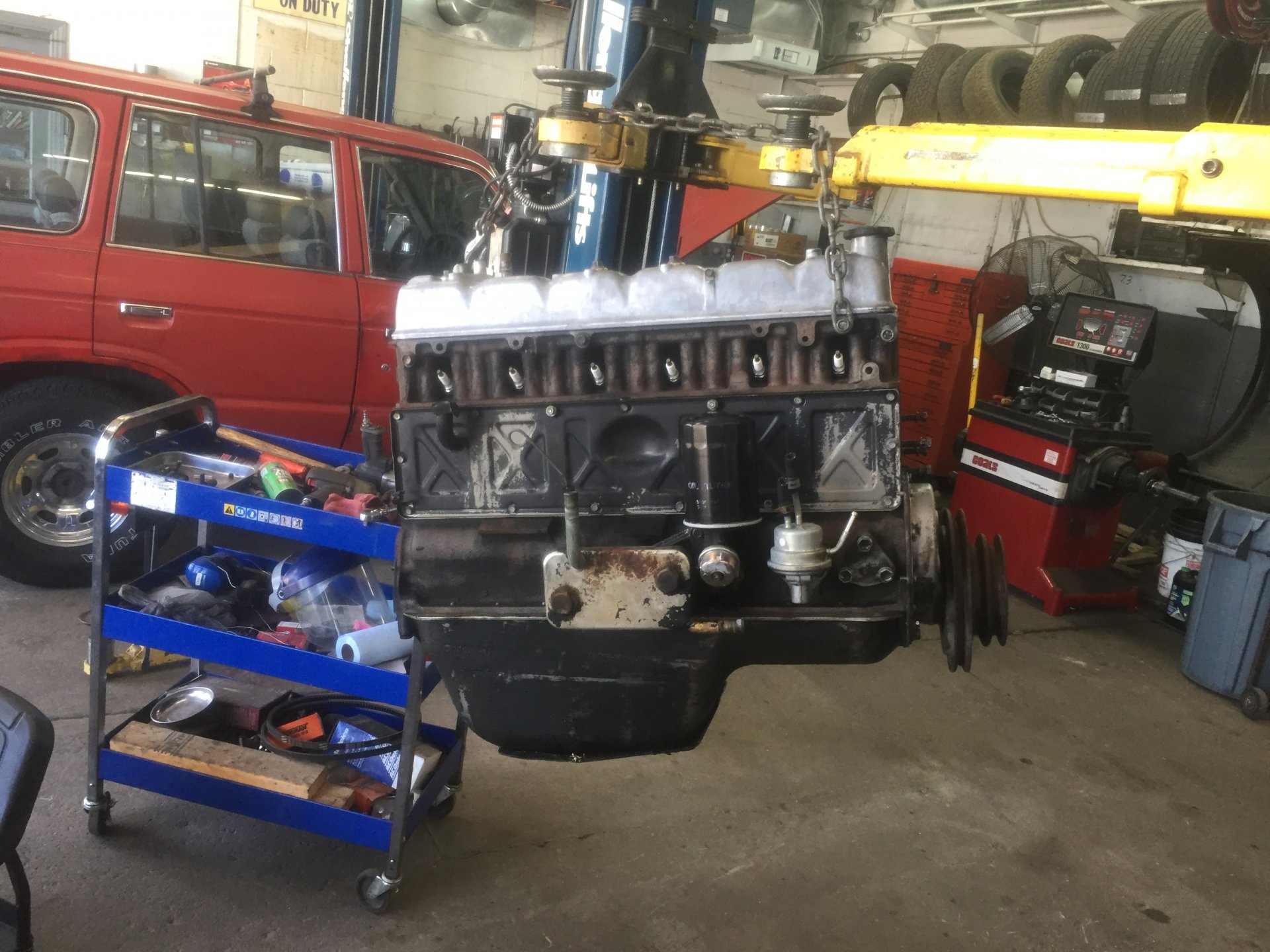 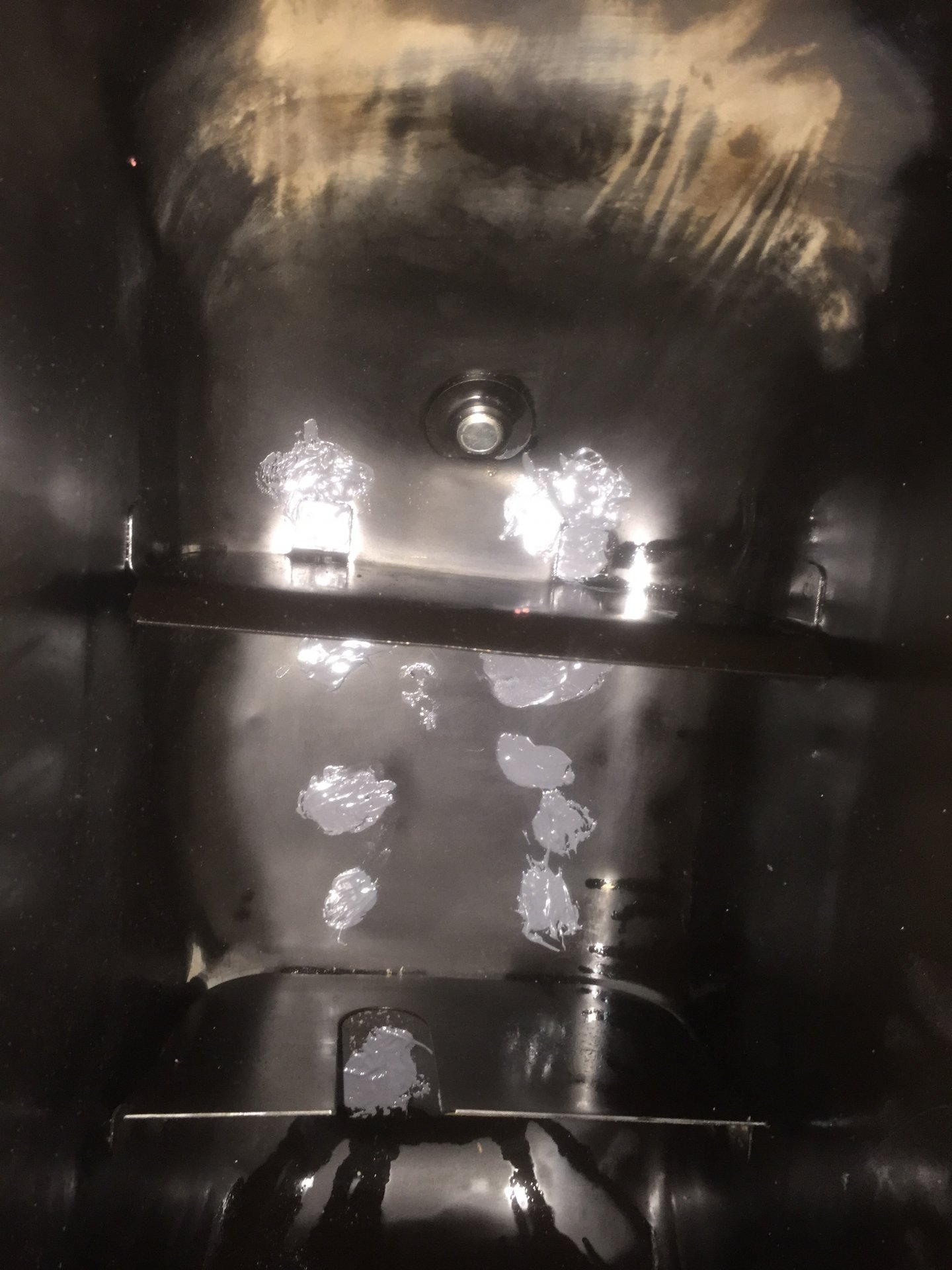 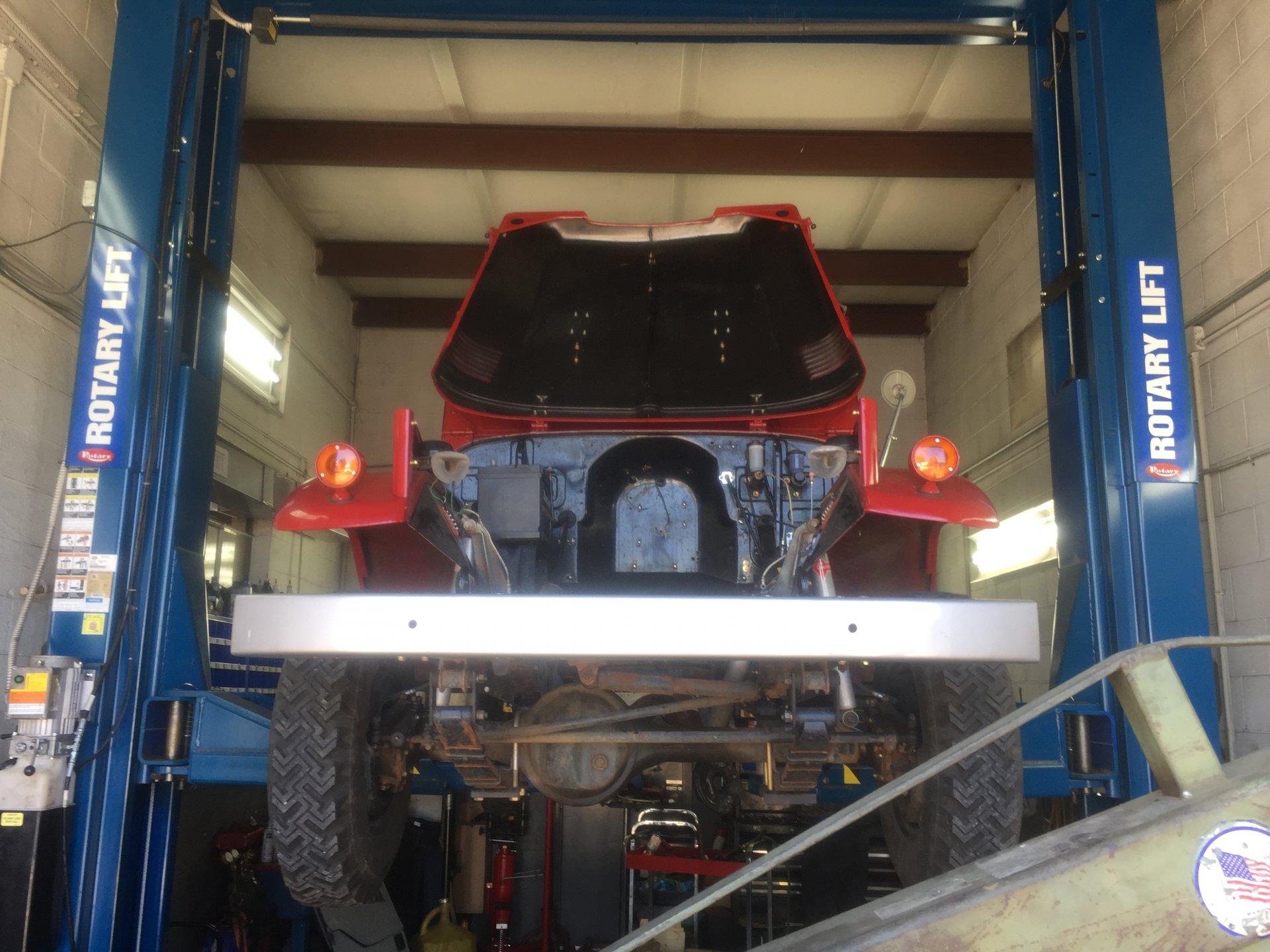 Rear main seal in, new oil pan gasket, flywheel back from machine shop and clutch installed. Plugging along between state inspections and other work. 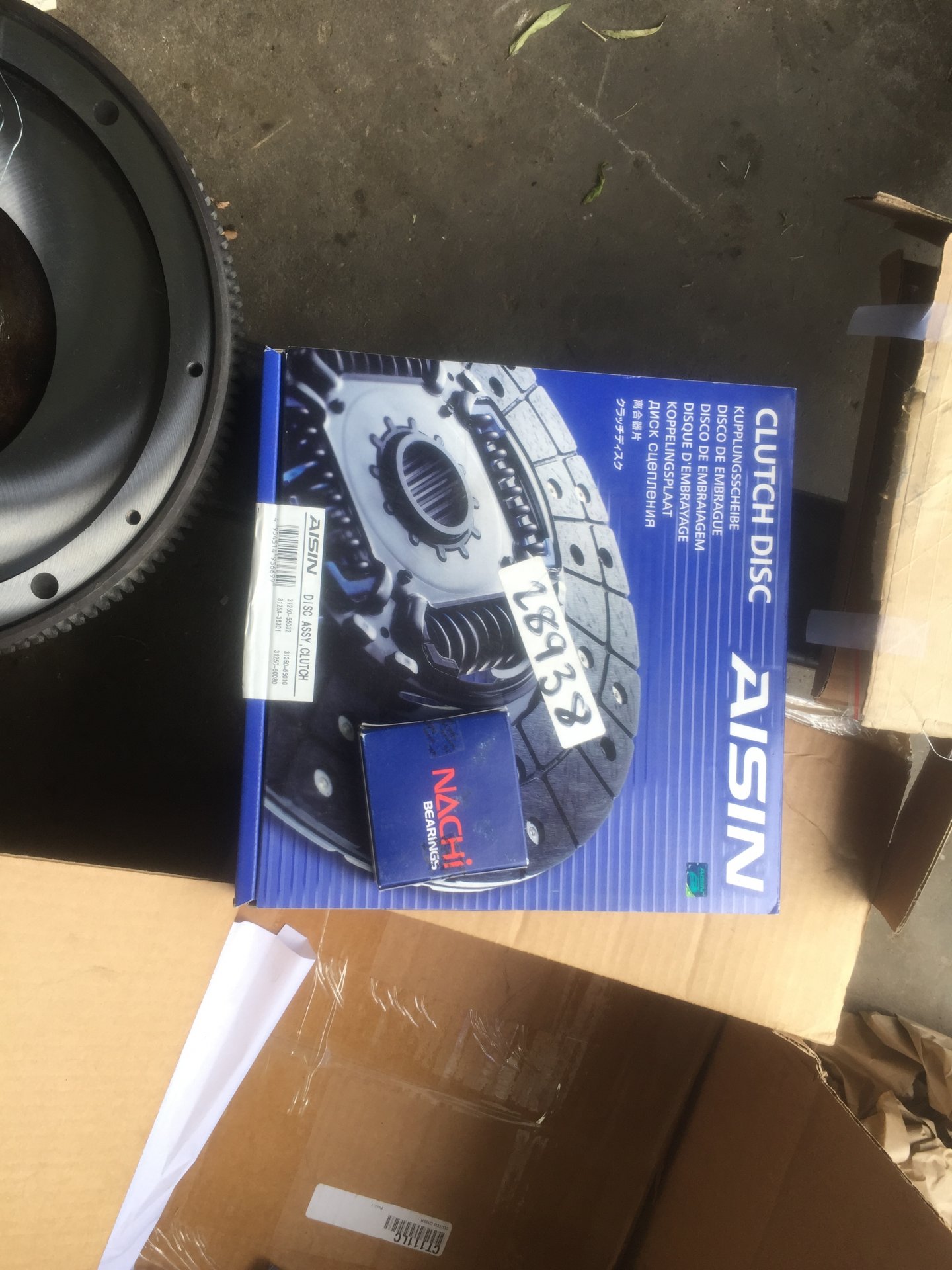 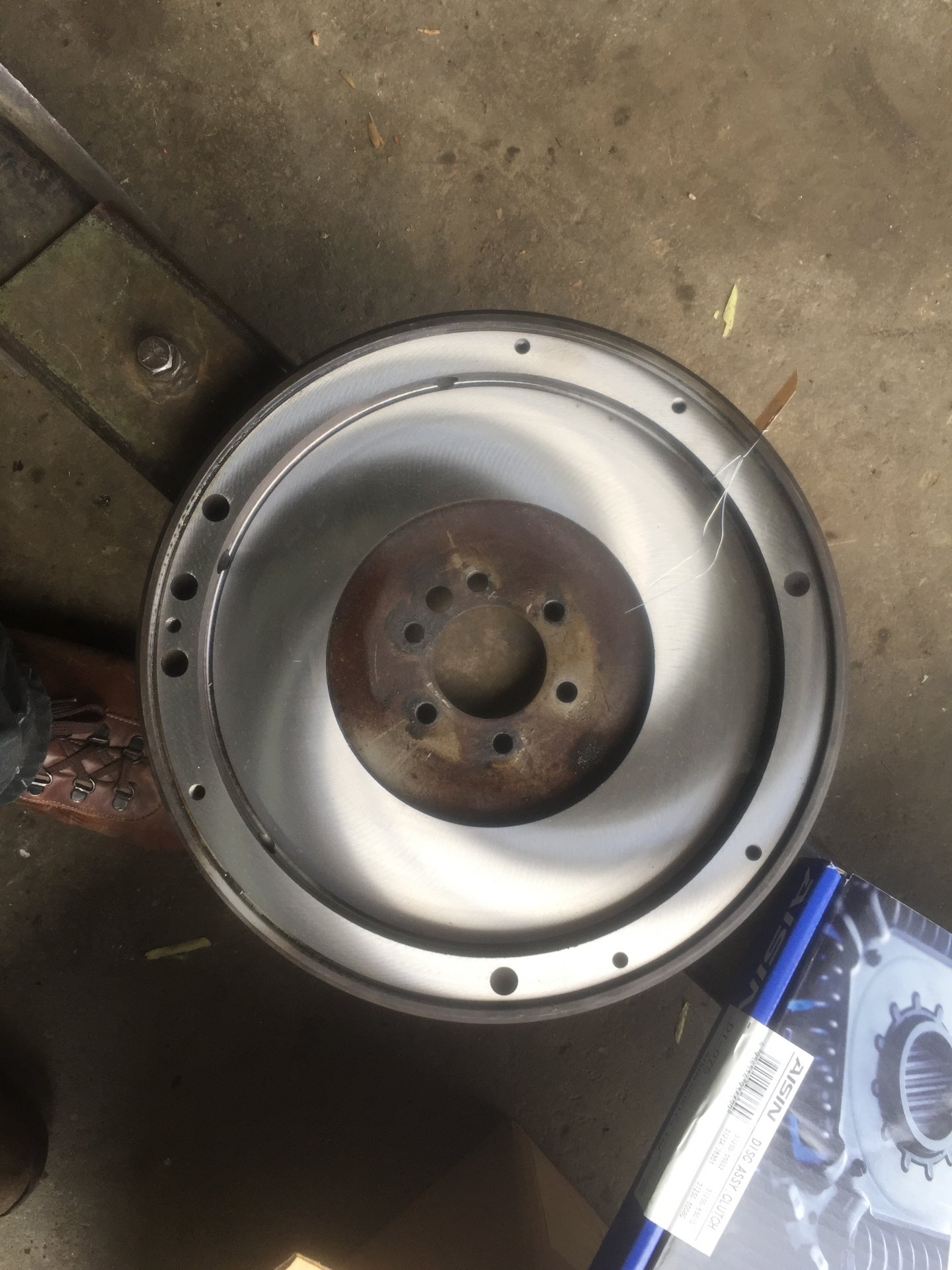 matzell said:
Rear main seal in, new oil pan gasket, flywheel back from machine shop and clutch installed. Plugging along between state inspections and other work.

Thanks Rob! Damn that flywheel looks pretty
Last edited: May 14, 2020

Glad to see it's moving along.

Trans and t-case are resealed and back together. Nut on back of t-case was not even attached and lock tab was not bent over. Engine is sitting back in place and new shoes on. I need to dress the engine but needed my 15k lift for another job. 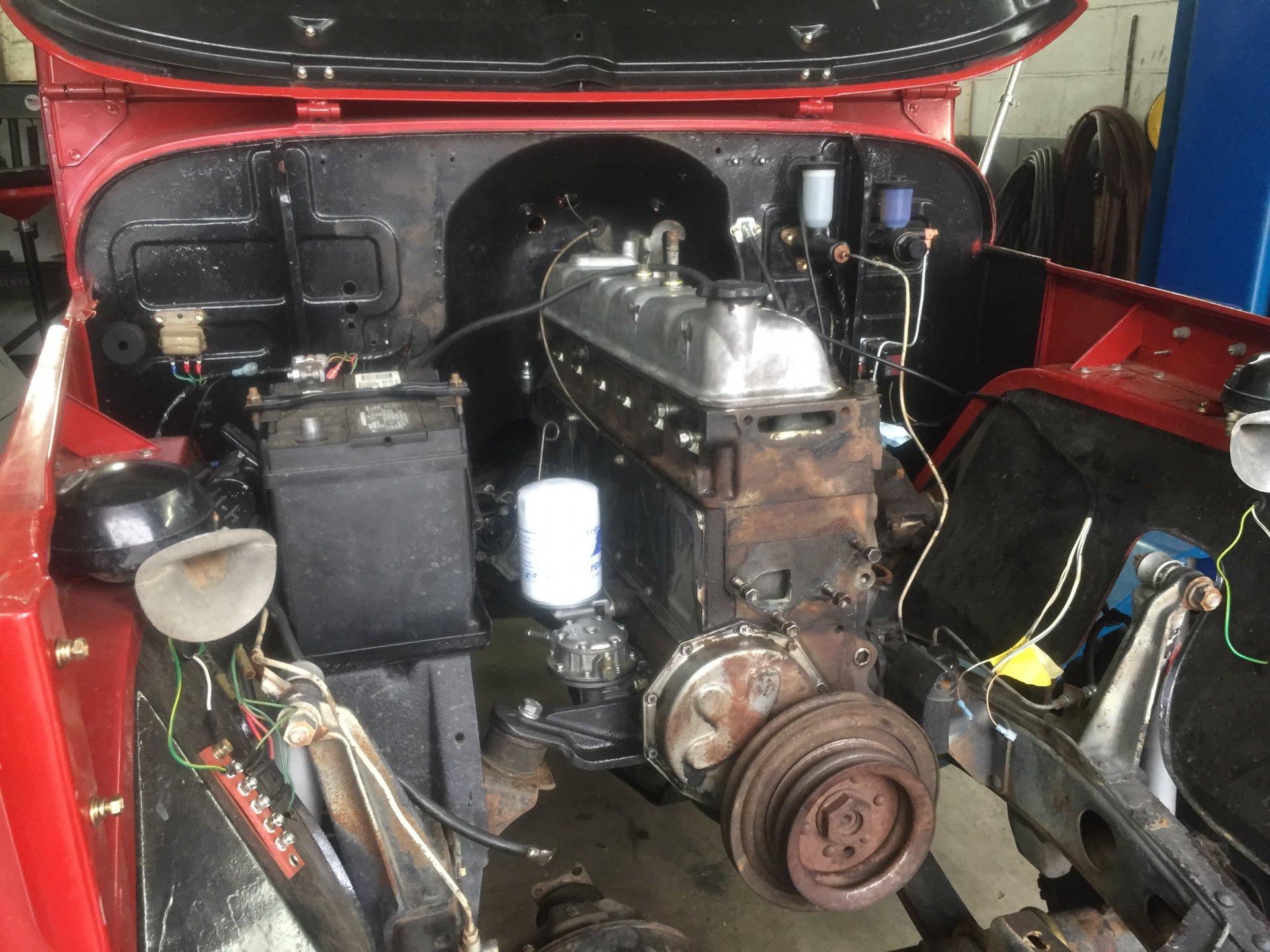 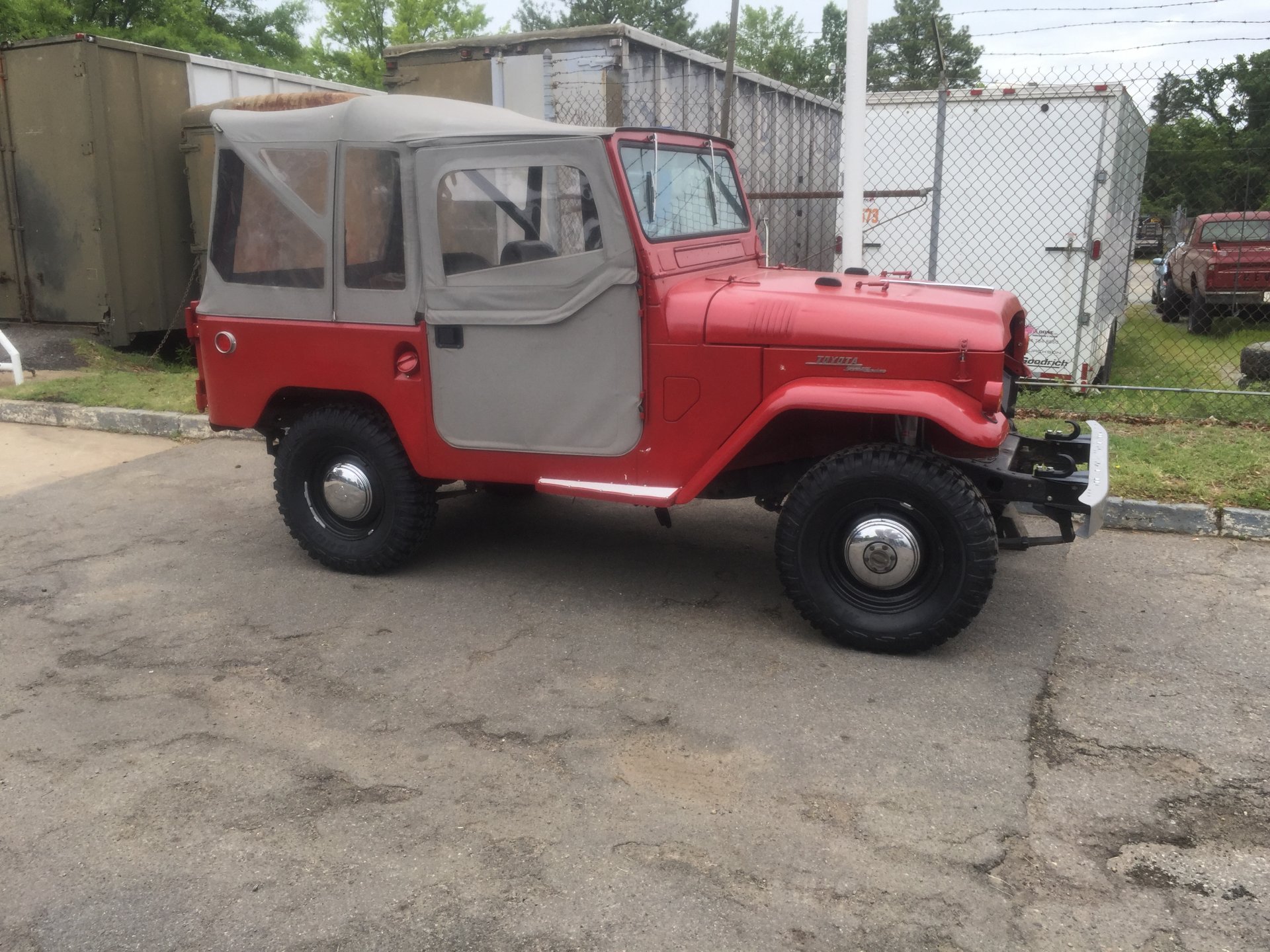 I made a little progress today. Hope to get more done Thursday. 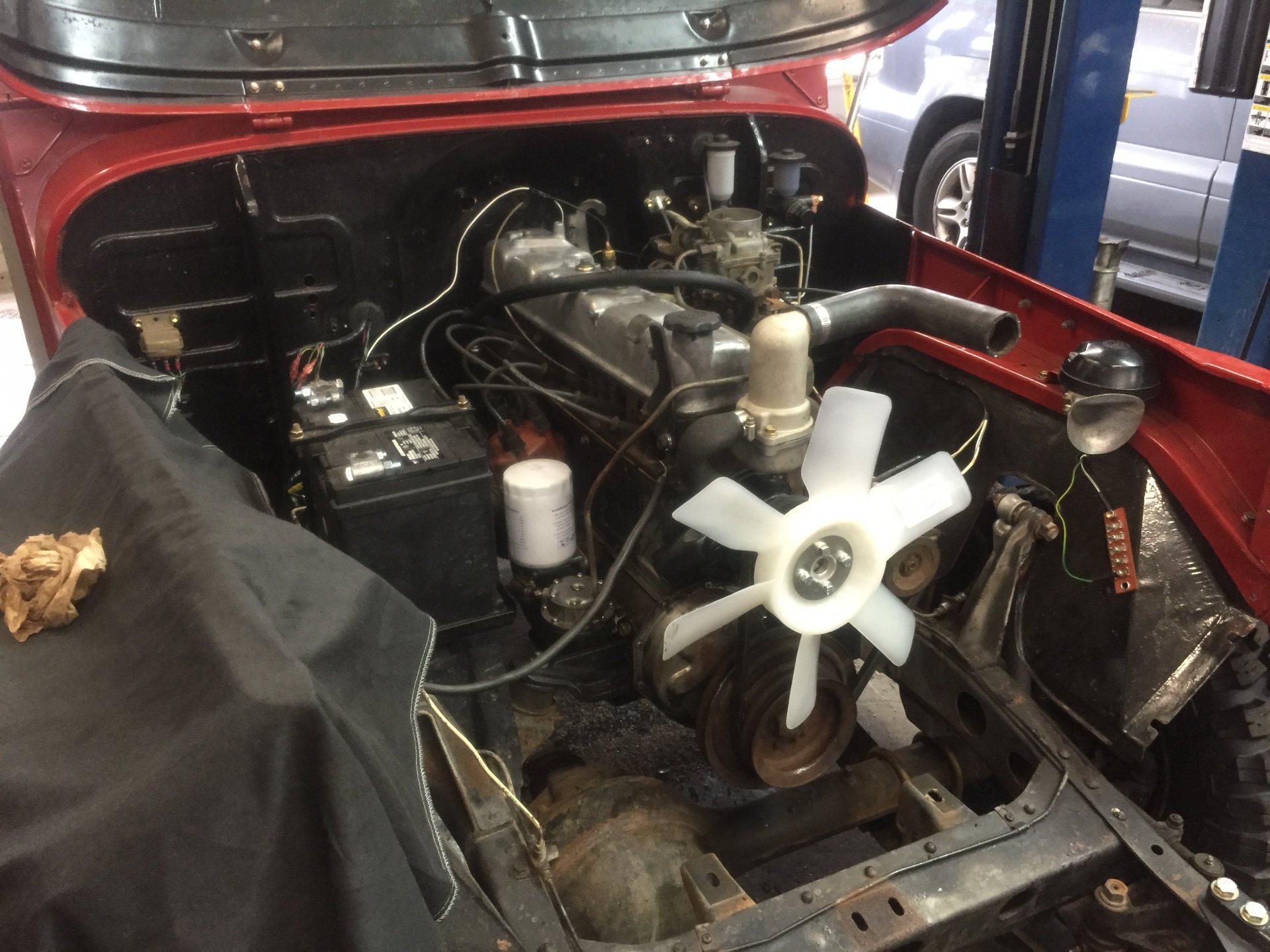 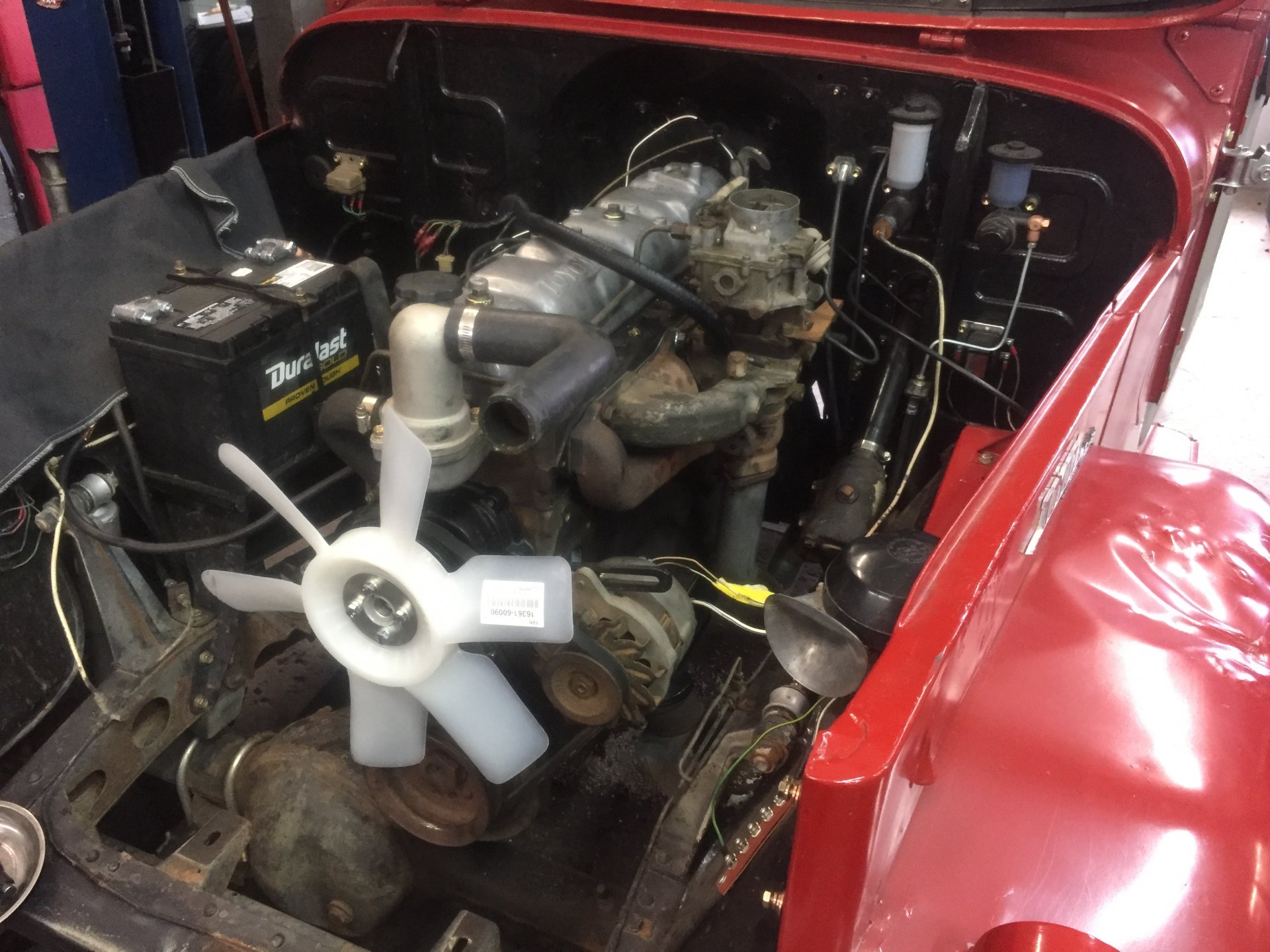 Thanks Rob. Can I convince you to get that sticker off the new fan? It's making my OCD twitch. Looking great!

All back together and running! 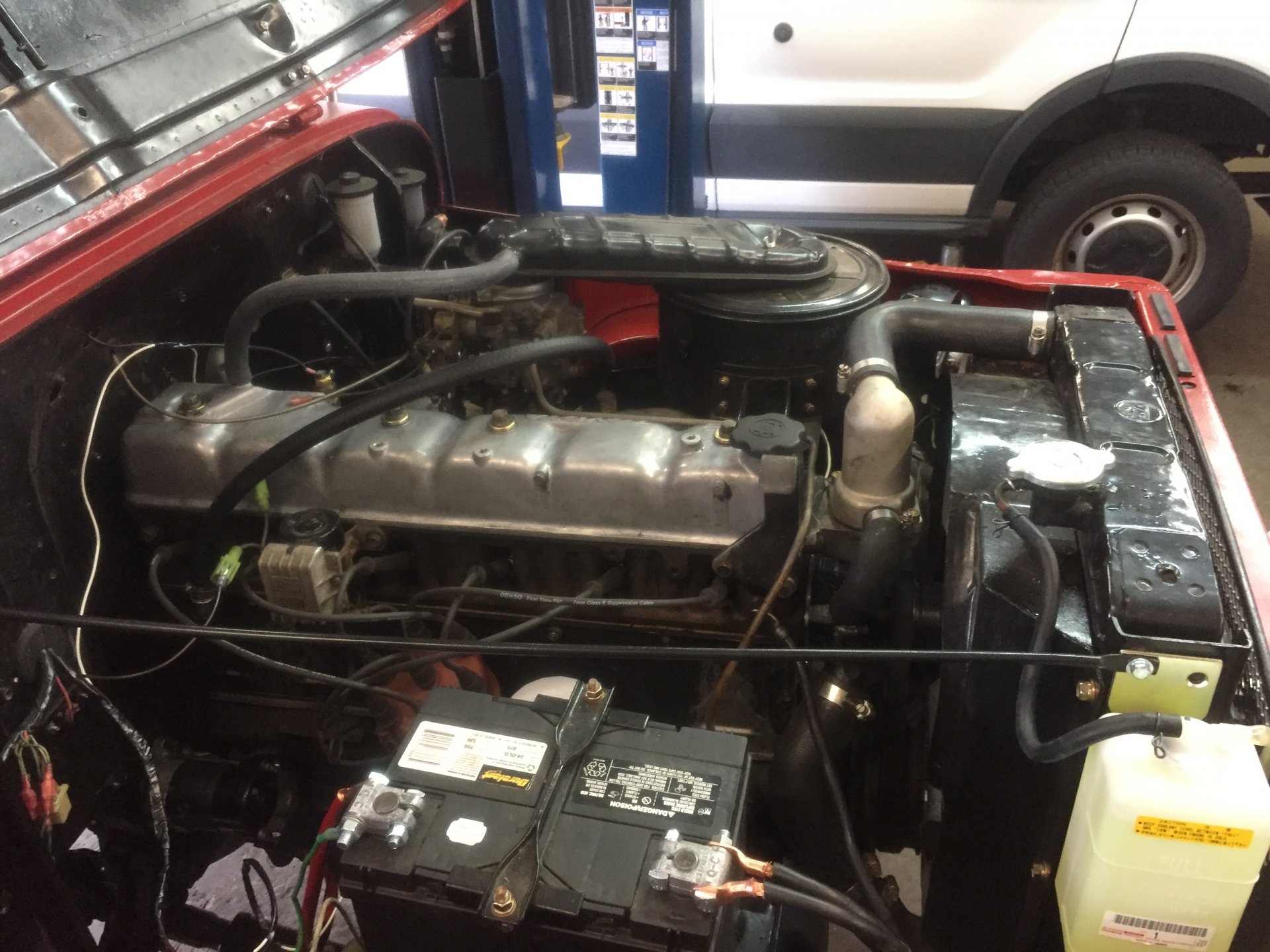 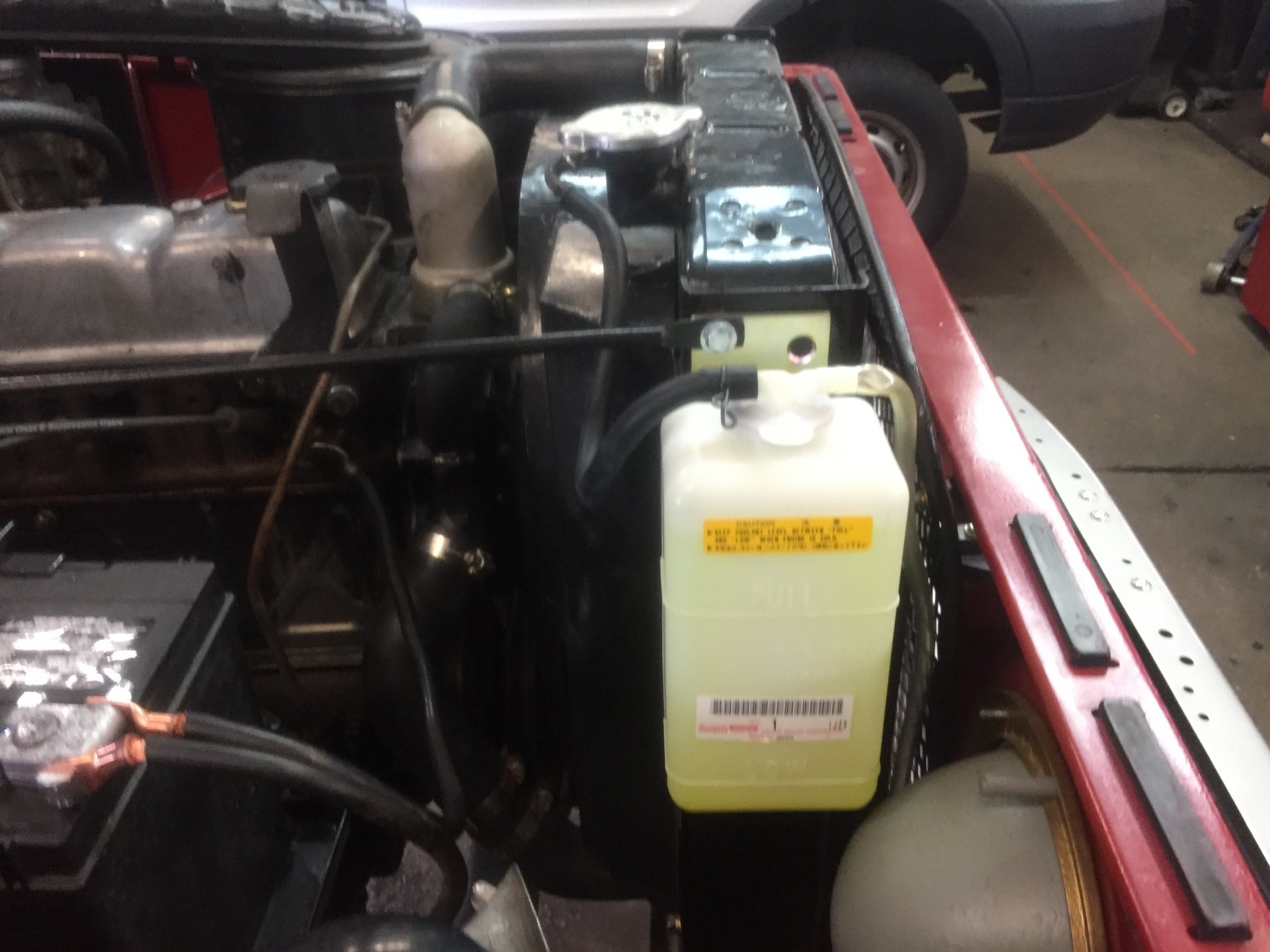 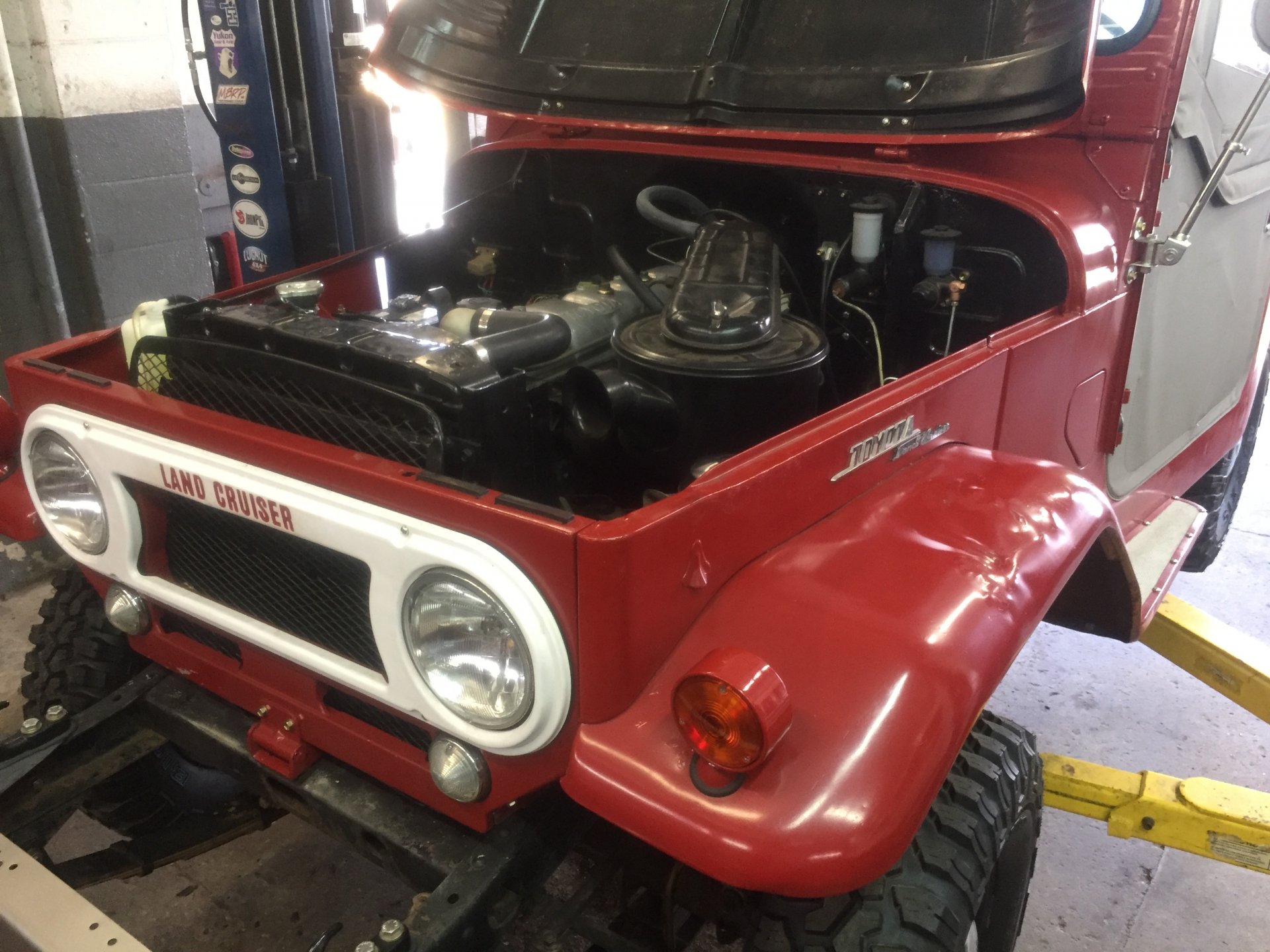