Project Stalled. Missing Part. Who's Got One? (1 Viewer)

Installing a four speed case in Bucky, the pig. I am missing a spacer that goes between the trans and transfer case. It is called an INPUT GEAR STOPPER. See pic: 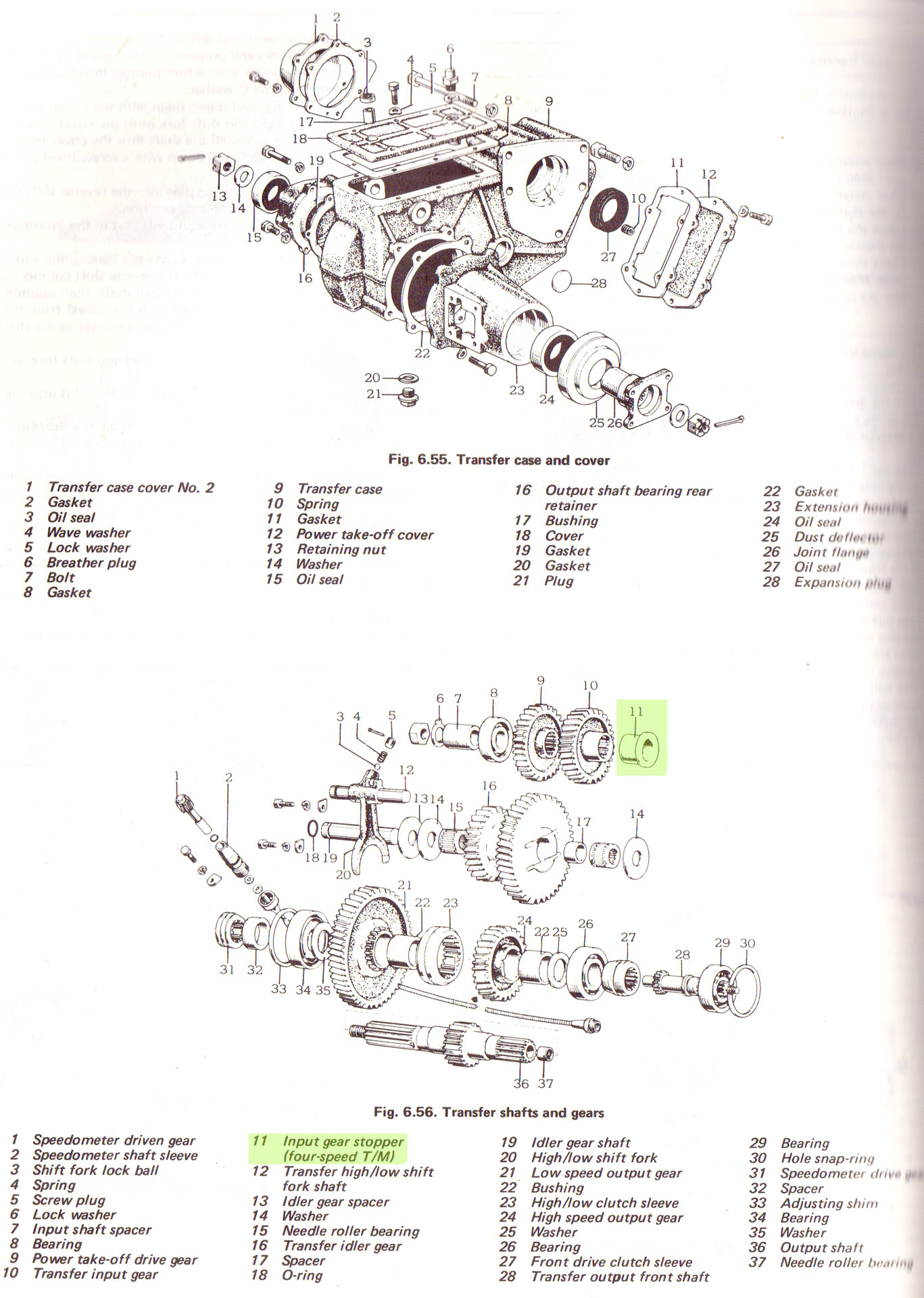 Without the spacer (gear stopper), the input gear binds against the inside of the case when everything is tightened up. Bucky had a three speed case behind the four speed trans, and the input stopper is not needed with a three speed case. Switching to the four speed case, I will have to have one. It would have been nice to know this before pulling the case and reinstalling without the spacer only to find that it doesn't work! Georg does not have one. Part is NLA from Mr. T. Anybody have this part or an old four speed and case that would be willing to let me rob it of a spacer? PM me if you do.

I pulled apart a 4 speed and 3 speed last month and neither one had the stopper. Did the 3 speed case split? what year 4 speed case do you have? 3 speed gears fit in a 74 4 speed case.
S

Looks like a pretty simple part if you could just find one to measure and copy.

I can assist in making one if the measurements can be found.

mwalls54 said:
I pulled apart a 4 speed and 3 speed last month and neither one had the stopper. Did the 3 speed case split? what year 4 speed case do you have? 3 speed gears fit in a 74 4 speed case.
Click to expand...

SeanLX said:
Looks like a pretty simple part if you could just find one to measure and copy.
Click to expand...

GLTHFJ60 said:
I can assist in making one if the measurements can be found.
Click to expand...

This is not a spacer inside the case. It is between the trans and the case. I posted this on the Pig forum as well. The folks there agree that it is a simple part and it could even be cut from a piece of pipe. I think the dimensions will need to be pretty specific. If I can get some specs, I’ll let y’all know. I think I will pull the case off and stack the gears, bearings and spacers on the shaft and see if I can come up with a measurement.

@Cirbo had a spare. Thanks, Jim! Transfer case is installed and all is well. Spins as it should. I’ll hook up driveshafts, linkage, speedo and parking brake tomorrow and take Ol’ Bucky for a nice, long drive.

I couldn’t find it. I was there yesterday and had no
Luck

I still think you paid a steep price brother. You've got a welding or fab credit on your balance sheet here if I can ever help.
You must log in or register to reply here.