Here is a new thread for the FAQ. with contributions from RavenTai and the Nak


RavenTai said:
I would baseline the PVC valve, grommet and both hoses on a new-to-you 80, they are not expensive all were well past done when I got my 96 at 100K,


The larger hose on the passenger side (I think called PCV hose #2) was cracked on mine and has been reported cracked by several others if it is so stiff it feels like a metal hose then it is time to replace it, it will crack at the valve cover shortly after that, same with PCV #1, the PCV valve itself can be checked by removing it and shaking it and making sure that the valve inside is free and seams cushioned by a spring but you are likely to crack the grommet pulling it out so probably best to just have the parts on hand.


As for a replacement schedule I am not sure, 100K and 8 years was too long but everything seams right for me with 65K and 3 years on the new parts, the hoses are stiffened some but not rock hard yet, maybe some of the other members will have an idea on time?
Click to expand...

The biggest problem in this easy job is not dropping some of the briitle grommet into the valve cover that will crumble as you try and remove. The Nak proposed a solution.


The Nak said:
When I changed mine I used a small knife to make three cuts in the grommet and removed it in segments. Here is a crude drawing of the cuts I made. I made the two cuts at the bottom first, removed that piece, then made the third cut and twisted the remaining two pieces out. My grommet was also very brittle, and I still had a small amount of breakage, but it seemed to work pretty well.

Both times I have done it, I have dropped part of it down the hole. I ended up using a hemostat and flashlight to find it and get all the pieces out.

This seems to put uniform force on the grommet, avoiding pressure spots that will crumble it. I've done this twice with rock hard grommets.

I wadded up electrical tape in a bullet shape and stuffed it in the grommet, left a long tail so when the grommet fell in I was able to lift it back up and get it with needle nose pliers.


That's my trick as well!

However: In my case it was indeed an easy way to pull the valve, but unfortunately the grommet stayed put. :whoops:

Had a similar problem on some older Jeeps I used to work on. My solution? Cover as much of the grommet as you can with the end of a shop vac hose. As you pull out the grommet, the shop vac will suck up any pieces that break off.
S

This seems to put uniform force on the grommet, avoiding pressure spots that will crumble it. I've done this twice with rock hard grommets.


In my case Doug, that caused an absolutely perfect split of the lower grommet. The good news is that it's pretty easy to get into the PCV chamber and get the rest of it out. I used some precision needle nose pliers, but like the shop vac idea.

I'm not convinced there is a easy way to do this. I've done this on 3 different trucks, and they all cracked differently. I say, whatever the method, make sure you have all the grommet. I also say, before attempting to even pull the valve out, have the new grommet in your possession. I made that mistake once as well. The MacGuyver for a 4 dollar parts run was pretty ugly.

What happens to the engine if you don't get all the grommet particles out?

SUMOTOY said:
The MacGuyver for a 4 dollar parts run was pretty ugly.
Click to expand...

MikePL said:
What happens to the engine if you don't get all the grommet particles out?
Click to expand...


I was wondering the same thing...

I just did this and tried to cut the gromet. Notice I said tried. The gromet went into 2 pieces into the valve cover. Fortunately the lip pieces broke away and fell toteh floor and I had 2 large chunks to get out. Teh other fun happened pullin the hose of which for lack of a better term desintigrated (SP) in my hand. So I replaced both of the top hoses. My wife had the last oil change done. Why is that important becasue the guys used the wrong oil filter, way to large, and I couldnt get it off due to the lack of space. I have to say that last night sucked all around. Well next is the phh and wont that b fun.

I managed to remove the valve and grommet as one piece.

1. Using a vice-grip jiggle the valve to loosen it a bit.
2. Using a flat-head screwdriver and a hammer gently tap the flat-head under the grommet lip on all sides, slowly loosening the grommet out of place.

Repeat these two steps and with some patience you should get the majority of the grommet out with the valve, if not the whole thing.
M

Also remove when hot or heat it up with a heat gun. Mike

Does anyone have a picture of the PCV valve - and/or a short description of its purpose in an engine?!

American by Birth, Texan by the grace of God.

mercfan said:
Does anyone have a picture of the PCV valve - and/or a short description of its purpose in an engine?!
Click to expand... 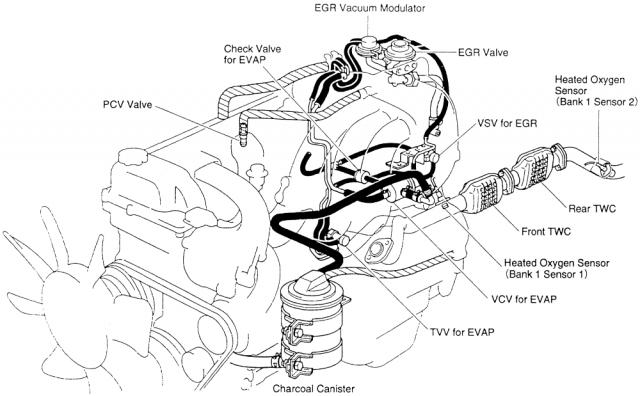 I was just poking around under the hood, looking at my EGR system, and noticed that the PCV valve is loose and wobbly. The grommet is intact, although hard as a hockey puck. I'm replacing the PCV asap, but it begs the question: it should be a tight, sealed fit shouldn't it?

I just changed mine and the new one on my "92 and it is very snug. Be careful getting the old one out if is is hard/brittle.
Last edited: Feb 14, 2011

American by Birth, Texan by the grace of God.

plutonius said:
The grommet is intact, although hard as a hockey puck. I'm replacing the PCV asap, but it begs the question: it should be a tight, sealed fit shouldn't it?
Click to expand...


Yes. loose and wobley is not desired, as it is not sealing anything in that case.

Yeah, it seems like it's due for an r&r. I'll update with any improvements if any...I've got an intermittent rough idle and maybe just maybe she just needs a new PCV.

Are you guys doing OEM replacement or another brand ?
You must log in or register to reply here.