Why does my 22re sound like it has some rattle clatter happening in the front end?

If the guides are fully intact, is it possible for the chain to be loose enough(either from wear or a malfunctioning tensioner) to have the chain clatter/rattle? Timing set has been allegedly replaced within the last 60k miles. Don't know the brand.

First start up there isn't any timing chain rattle. But shortly after pulling out of my driveway and hitting 3rd then coasting to the light, there's a light clatter/rattle on decel and while sitting at the light. Bring the rpm up a bit and it gets louder, then will go away...or maybe just gets quieter or drowned out from the exhaust.

Once the truck is warm/hot there is no clatter sound at all at idle, revving, or coasting. If I shut it down and restart it shortly after(say within a minute) the truck has no start up clatter and doesn't make any noises and runs as it was before. If the truck sits say 10 minutes, it has a bit of start up rattle then goes away after a 2 seconds. If the truck sits for say 20-30 minutes, this rattle goes on for an extended period of time (say 10 seconds) before stopping or it'll have start up rattle that doesn't really go away similar to what happens after pulling out of my driveway, then will go away when the motor is driven a minute.

when the truck is making the noise it is loudest just sitting at an idle at an exact rpm (say 1200rpm) and doesn't have a ramped up clatter noise on decel if you just snapped the throttle open and closed.

Truck runs mostly pretty mint. On hot start sometimes it misses the first crank and I have to hit it twice. Always been like that as far as I recall.

The extended rattle/decel clatter is recent in the last 3000miles (more so in the last few hundred miles, but I first noticed an a hmmm...that noise is new roughly 3k miles ago and only did it after hot and sitting and only sometimes, now it is pretty predictable and will do it cold and after pulling out of the driveway and will always go away once warm/hot) Before that it for sure only ever had the initial 2 second fire up clatter after hot and sitting. Not sure if these are even the same sound but it's worth mentioning. When I first noticed the noise I adjusted the valves and inspected the guides as far as I could see w/ the valve cover off. But now it's getting persistent enough something should be done if I expect this to be my daily driver without unexpected downtime.

How can I better diag this before replacing a timing set that may not be the problem? Can a water pump make these kinds of noises?
Last edited: Feb 26, 2020

Chain slack is taken up by the tensioner, which has a spring in it for initial tension, then the oil pressure creates the force to take up the slack. If you are up to it, I would replace the oil pump AND the chain tensioner. You could also do an oil pressure check, with a REPUTABLE MECHANICAL gauge (not electric).

could it be valve noise and time for r a valve adjustment?

KLF said:
Chain slack is taken up by the tensioner, which has a spring in it for initial tension, then the oil pressure creates the force to take up the slack. If you are up to it, I would replace the oil pump AND the chain tensioner. You could also do an oil pressure check, with a REPUTABLE MECHANICAL gauge (not electric).
Click to expand...


Oil pressure is 9lbs hot idle based off a gauge out of a professional grade test kit. Test was done on 5w30. Normally run 10w40 and thats currently whats in it.

So even if the guides are good the chain if not being tensioned properly will clatter/rattle?


bigredmachine said:
could it be valve noise and time for r a valve adjustment?
Click to expand...


Valves adjustment is in spec.

toyotaboy80 said:
Oil pressure is 9lbs hot idle based off a gauge out of a professional grade test kit. Test was done on 5w30. Normally run 10w40 and thats currently whats in it.

So even if the guides are good the chain if not being tensioned properly will clatter/rattle?

Valves adjustment is in spec.


Obviously 9 lbs hot idle is NOT good. I assume this was checked with a mechanical oil pressure gauge?

Pre 84 Trucks - 22r oil pressure specs - Anyone know what the specification for oil pressure on an early 22r is? I just installed a pre-84 22r from a 2wd pickup into my 1984 4runner, and it seems my idiot oil pressure gauge registers very low. I wouldlike to get a mechanical gauge and double...
www.yotatech.com

The piston expand at different rates than the block so for a small time they clatter as they heat up.
Every 22r ive seen does it

Nine pounds at idle is within spec. 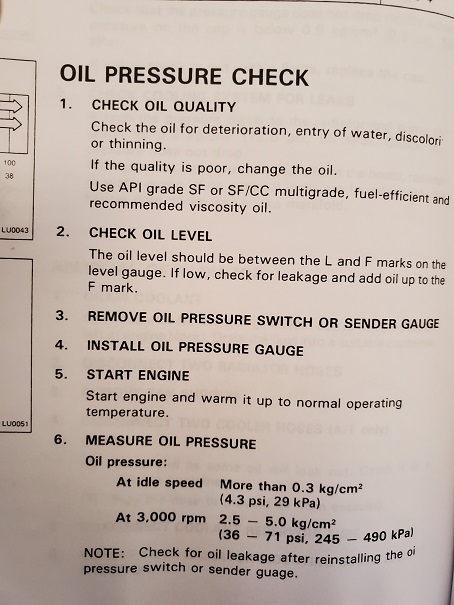 when cold, check all the exhaust connections including bellhousing clamp, heat shields, muffler as well as catalytic converter for rattle.
T

Nothing like trying to diag a sound you can't hear sitting on the other side of a computer. Since we're all walking around with camcorders and microphones in our pockets here you go...

Here's a "hot"ish-start....truck sat for 1hr before this start. Was hot prior to this start. Missed first crank...and also stumbled to life on the 2nd crank. Does that hot sometimes. Cold is always first crank with an authoritative "vroom" when it fires.

This is a continuation of the first vid after I shut the hood and got in the truck. Currently don't have a shift boot in the truck so I just pointed the mic at the trans tunnel.

Continuation vid still... by the time I backed out of my driveway the rattle was gone. Pulled back in. Popped the hood, and this is the vid. No rattle, but does sound kind of like somethings there... It's sounded like that for a long time. Chalked that up to standard flat tappet chain driven valves. Mostly I figure this is a pretty standard/healthy sound for a 22re? Shut the motor off after this vid.

Here's a hot start after 5 minutes.

Tried taking videos this morning on cold start and all that but it didn't make any noises today until after being hot-started. Go figure.
Last edited: Feb 27, 2020
T

I think my denial may be coming to a screeching halt here. It really does sound like the timing, doesn't it?

2hrs later went and flashed it up to go somewhere and it had the 2 second rattle on start up then quiet as a mouse no noise at any time... idk...somethings on borrowed time...

What are you running for an oil filter? This almost sounds like a dry start. A good oil filter will have an anti-drainback valve.

pappy said:
What are you running for an oil filter? This almost sounds like a dry start. A good oil filter will have an anti-drainback valve.
Click to expand...


Excellent point. Hope it's not a Fram.
T

Currently a Mahle filter on it. Wix before that. Toyota for all filters prior to that Wix....got me thinking now. I change the oil based on time rather than miles because it doesnt get miled out...

Cant remember if the noise ever happened on a toyota filter... wix for sure happened but cant comment on the frequency and cant recall frequency increasing with the mahle. Idk... only reason the mahle is on there is because I couldnt get a wix from where I got the mahle but wanted to change the oil and it was after hours at the wix shop.

Ive currently got 2 wix filters on hand though for my next oil changes.... but cheap enough to just slap a toyota in it right now and see what happens. Like i said, hard to pinpoint a time but I cant say I've always had the same filter on the engine. Its definitely a variable

I would slap a Toyota on there. There have been reports of six filters being bad over in the 80s section that would make me hesitant to run them.

The design placement of the 22re oil filter is, in my opinion, stupid (sorry Mr. T.). Since it points up just a tad it gives the filter a chance to drain. I've had Toyota filters drain back too, but not that much. On other engines (3RZ comes to mind) the filter points down, so there is no chance to drain back.

pappy said:
Nine pounds at idle is within spec.


Wow was that insightful. 4.3 PSI at warm idle is within spec. Huh. My truck warm idles right around 23-25.
You must log in or register to reply here.