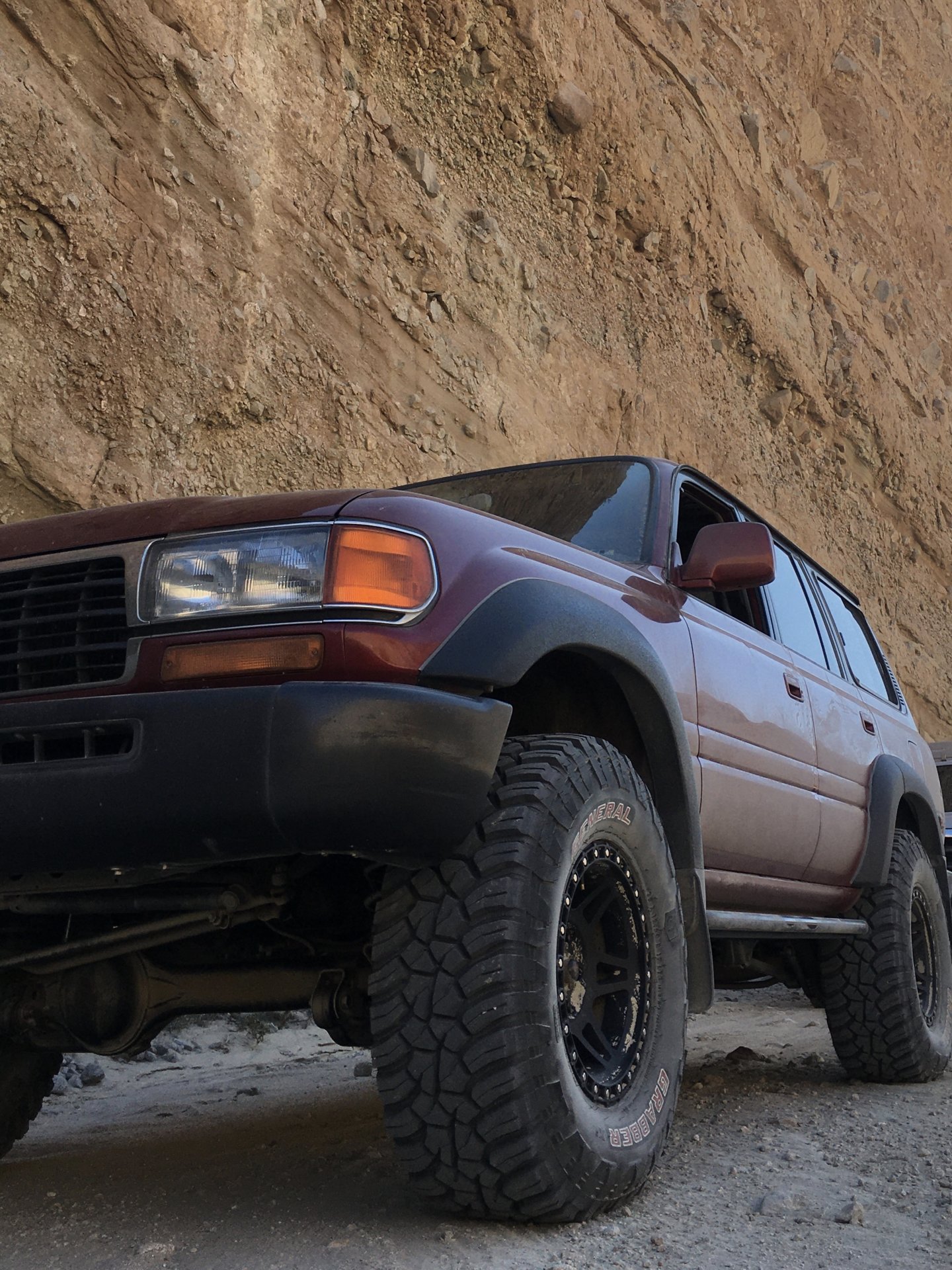 Another pic of the rig from Anza Borrego.

Setting up camp for the night! 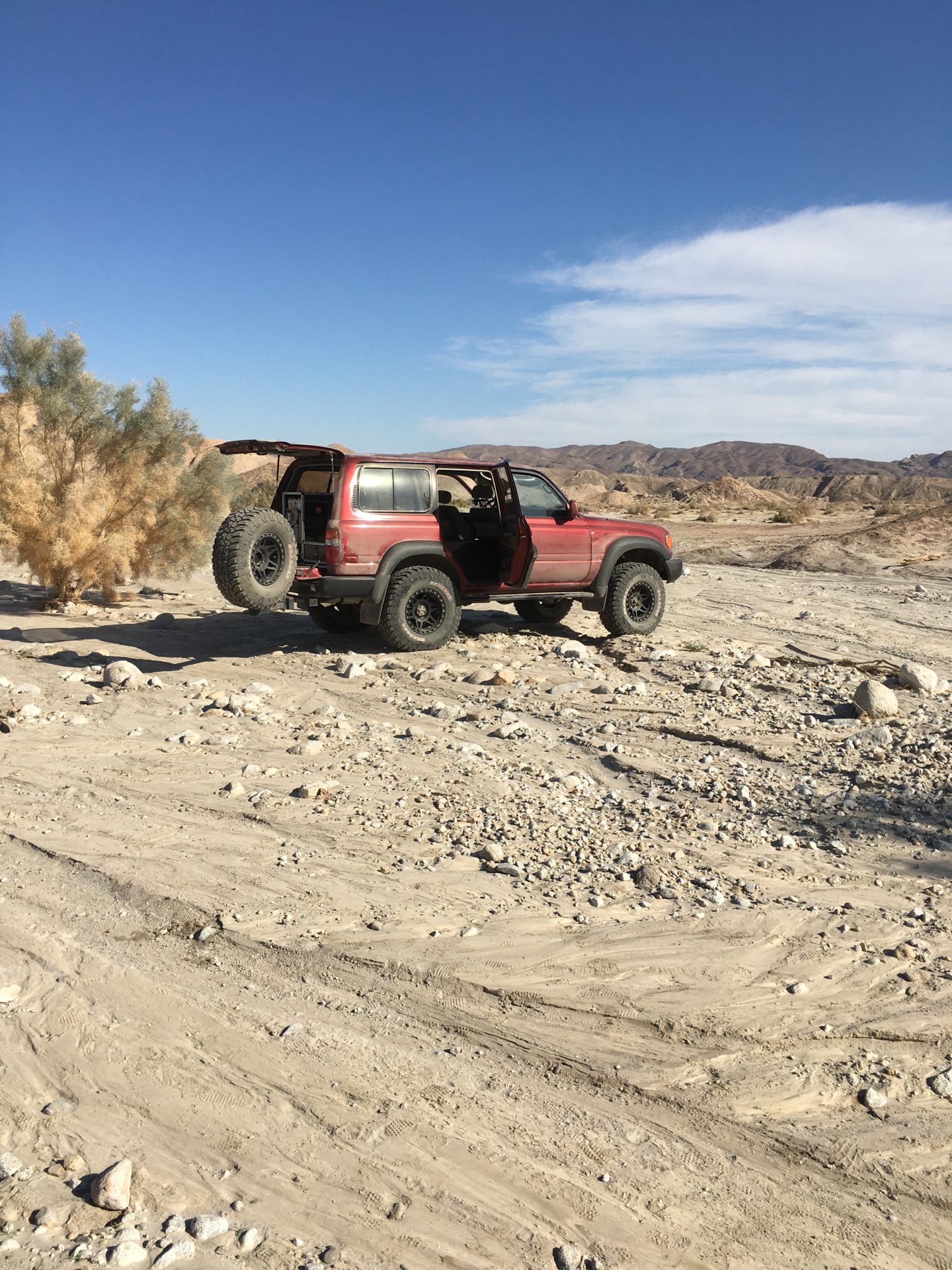 Making a bracket to hold my handheld ham radio. I purchased a battery by pass so I needed a channel where the cord could stick out the bottom. I'm going to paint it black and mount it on the back of the center console. I'll show pics of the completed project when I get there. 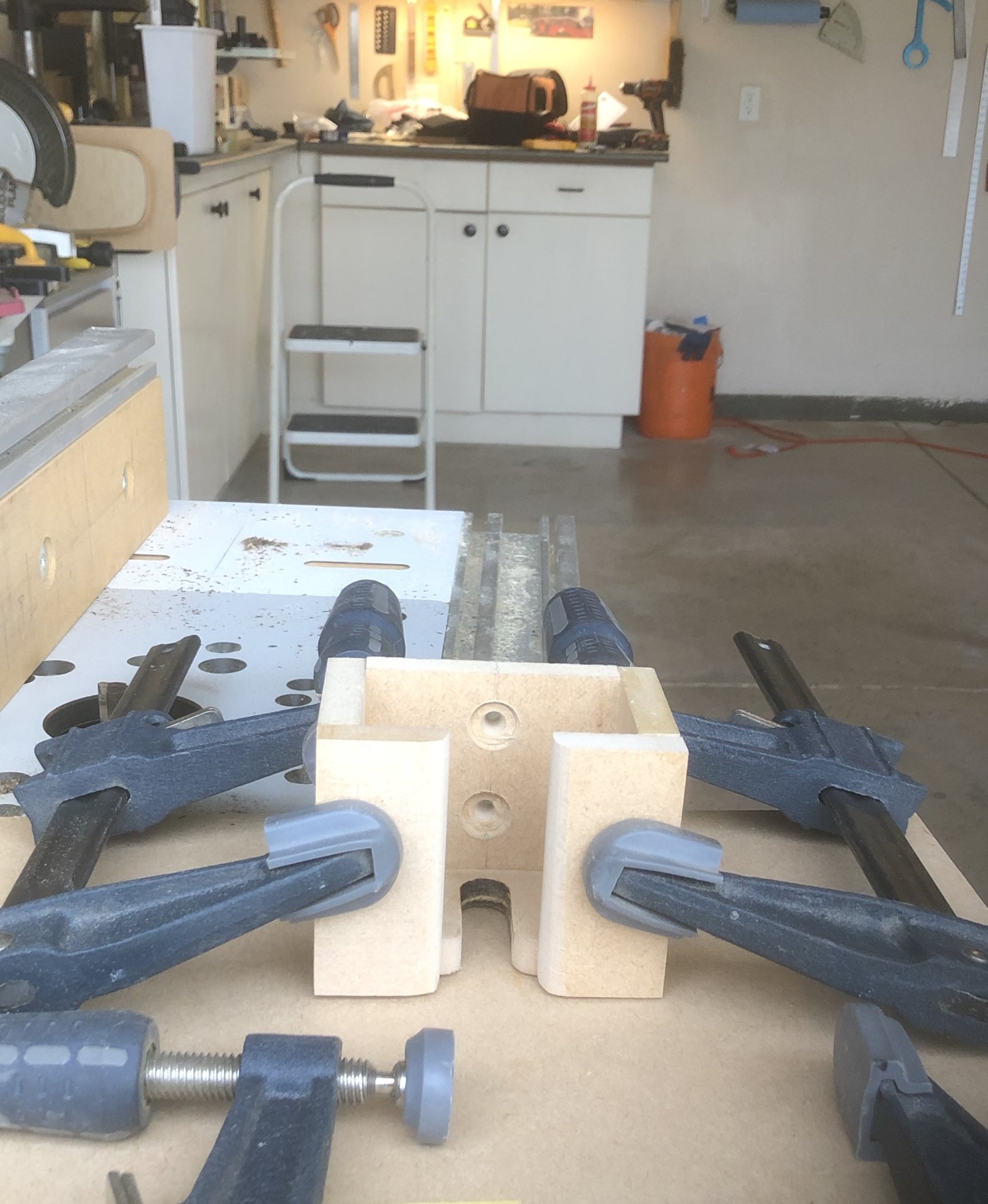 Here it is with the radio in... 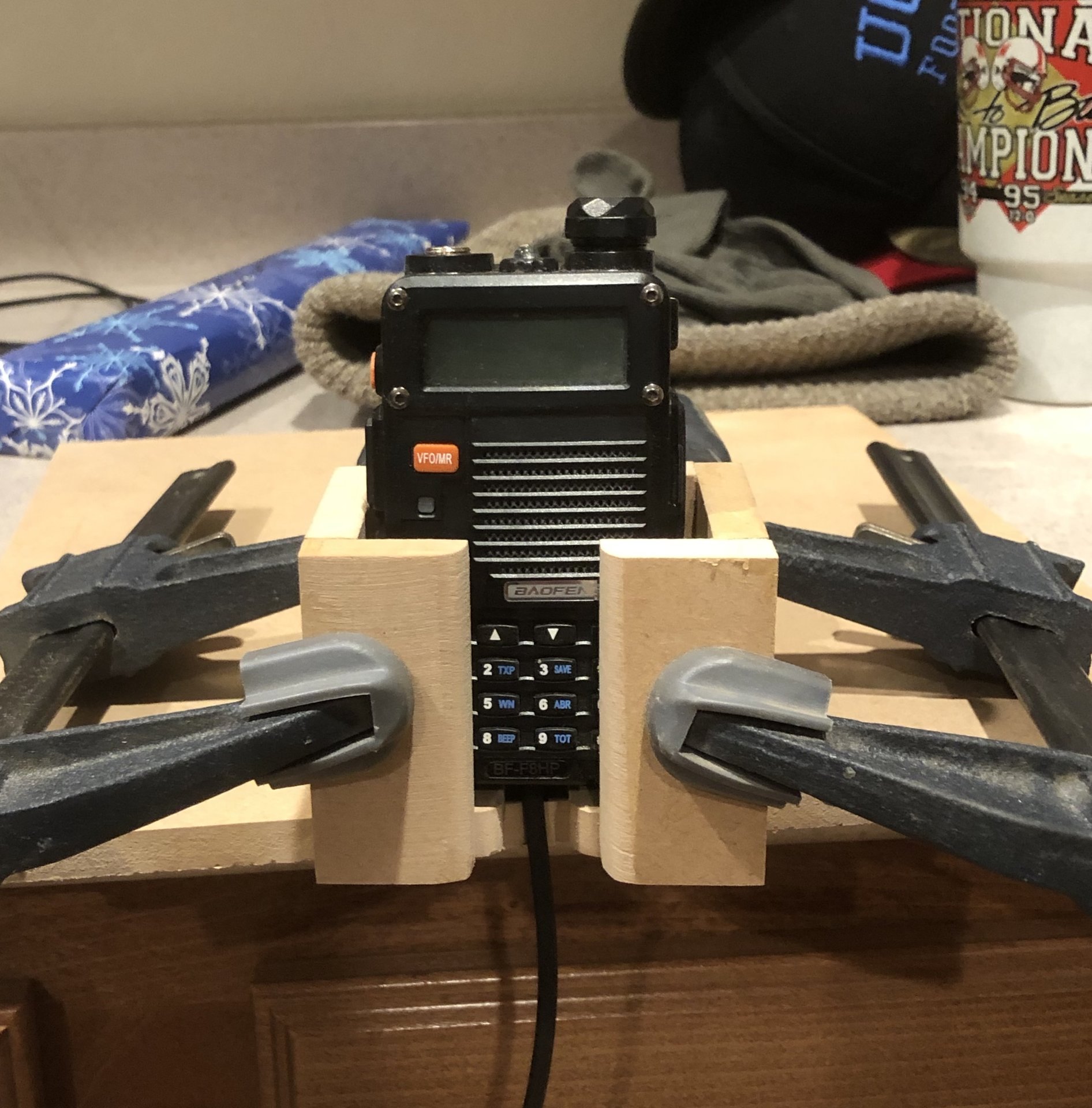 I added shore power to the 80 to keep the aux battery topped off. Ideally I would've added solar, but it wasn't in the budget. 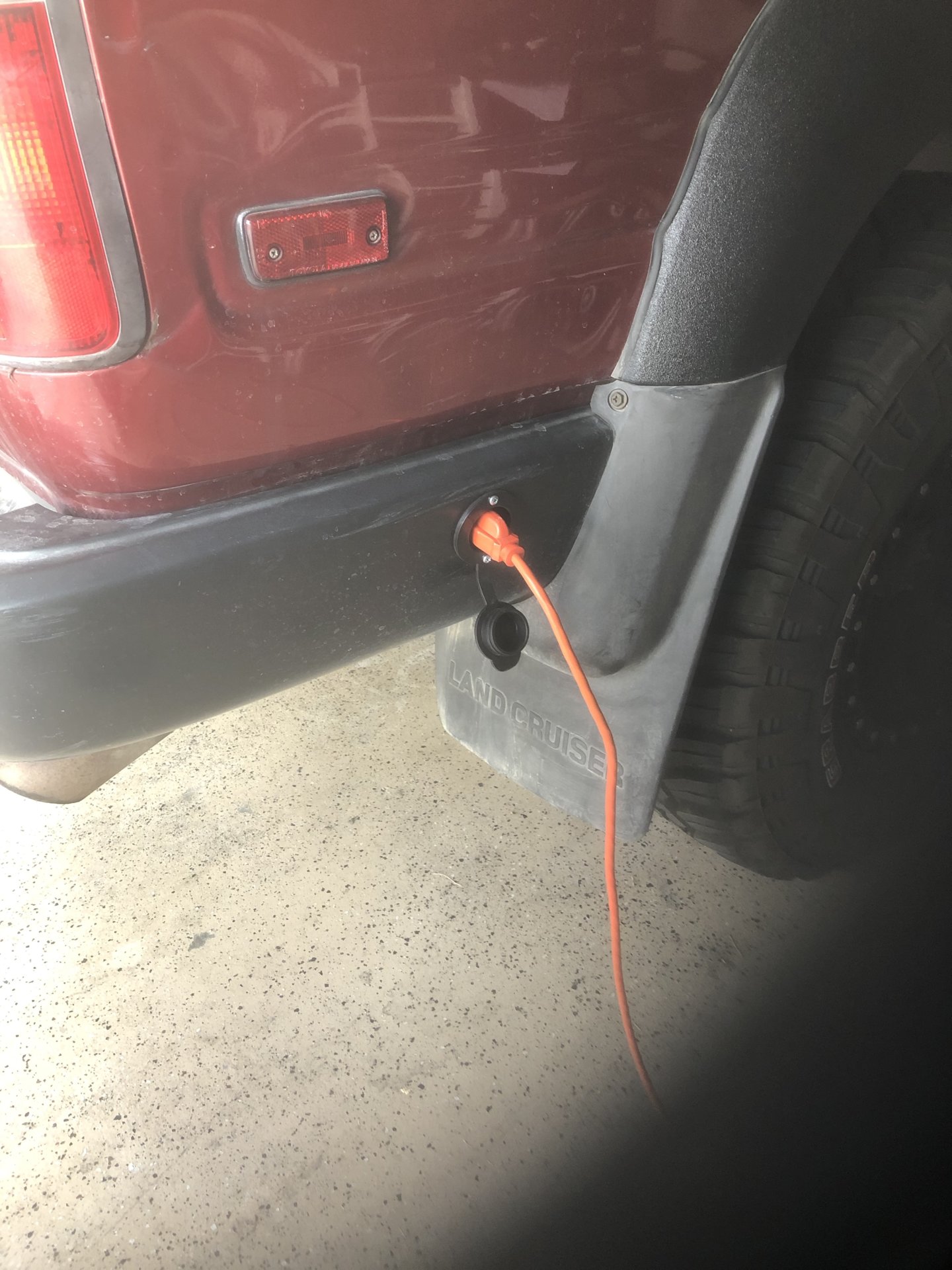 Being forgetful, I don't want to drive off with the 80 plugged in... 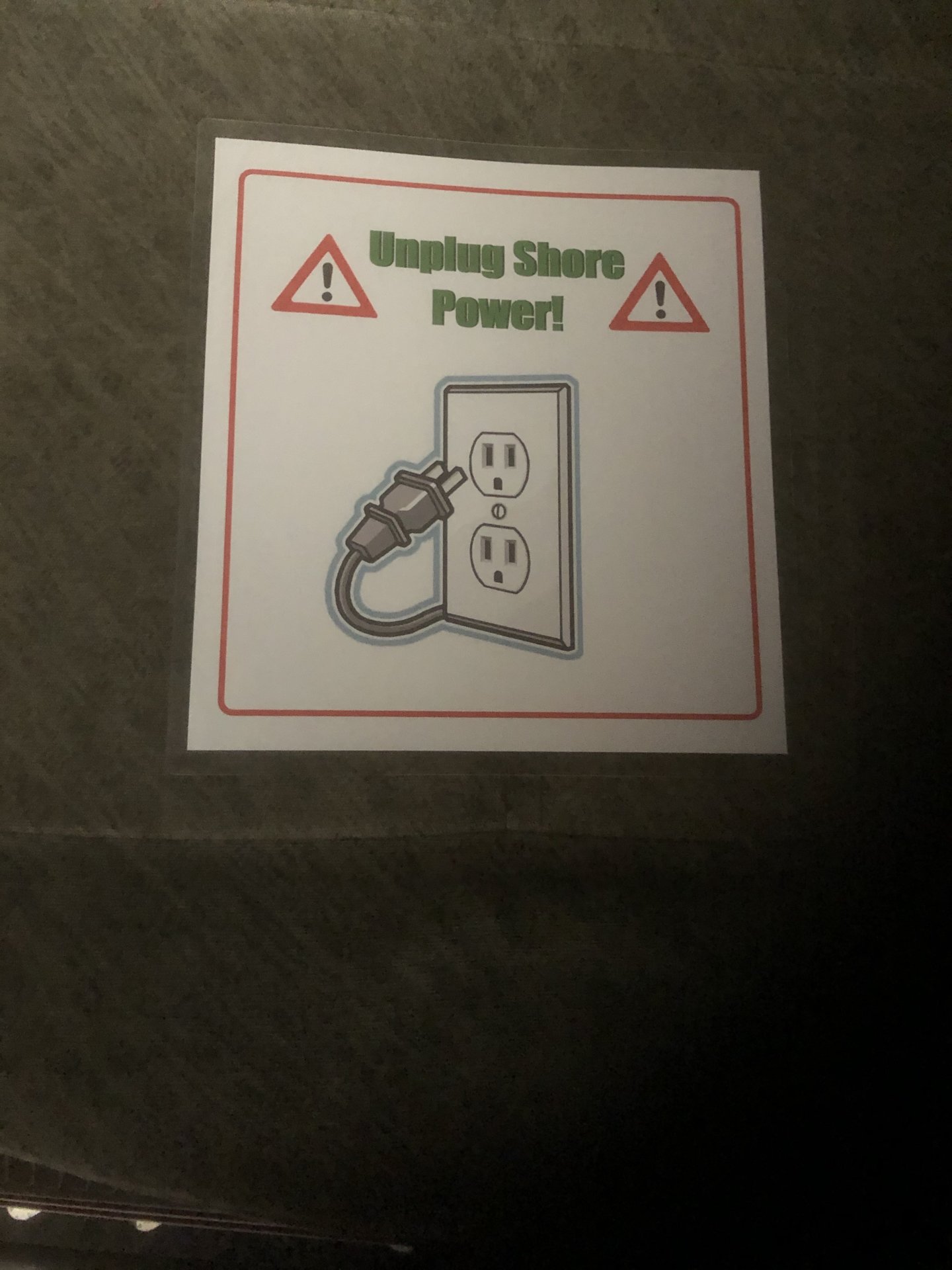 I could've used that on a few occasions

FJRanger said:
I could've used that on a few occasions

Believe you me, I will still probably drive off with it plugged in!

Doing a little wheeling in Death Valley for the new year. 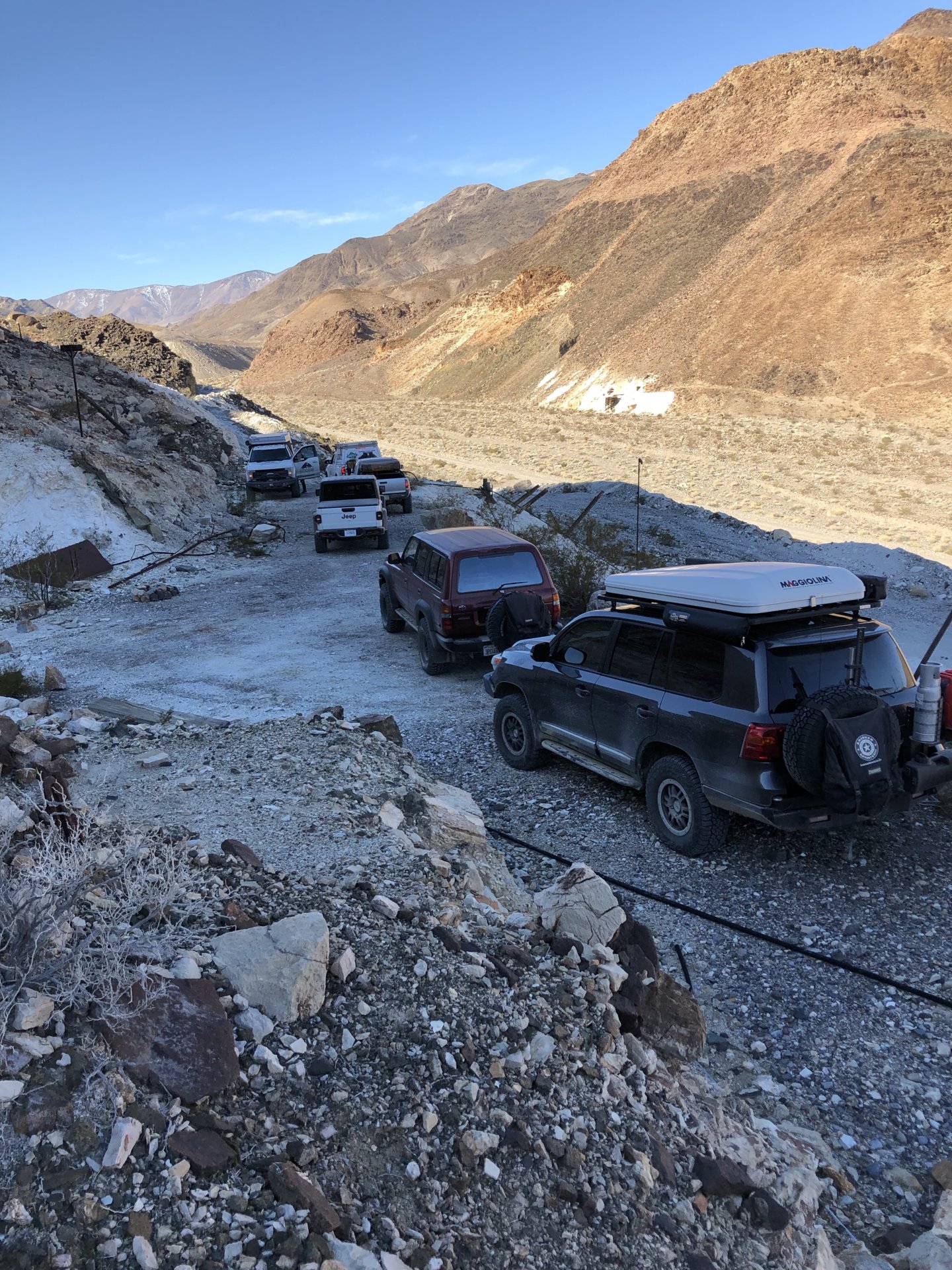 Day three of the Death Valley trip did not go as planned. Somewhere wheeling I lost the hose that goes from EGR modulator to the EGR valve. Now the 80 doesn't shift gears and can't go over 30 miles an hour. Limped it to Furnace Creek. Called a NAPA parts in Pahrump, Nevada that had a silicone hose that will work until I can get a replacement. Asked NAPA what time they closed and they said 5 PM. Race the nearly 2 hours to get there and arrive at NAPA at 4:45 PM. The place was locked up and nobody was to be seen. Had to get a hotel in Pahrump and hope that NAPA is open today. Fingers crossed....

Ended up getting the silicone hose from NAPA yesterday and cut and fitted it to the 80. It stayed on and then tested the vehicle. The initial idea was to run it up a short hill in Furnace Creek and put the tranny under load to see what happens. Drove it out of the gas station though and realized immediately power had not returned and the problem did not go away.

It was decided that four members of the trip (Death Valley Expedition 2019 or DVX19) would continue on and myself and another member (who had to leave early to return to work) would wait for a tow truck to take it to Ridgecrest to get repaired.

During this time someone in the group was polite enough to close my door with the keys in the ignition. Yes, it auto locked and I was locked out of my rig. I had a two hour wait for the tow truck with nothing to do. I could have been laying in the back and watching a moving, drinking an ice-cold beverage with snacks. Instead, I had to twittle my thumbs and watch time stop.

To keep up with the day I was having, at the precise time the tow truck company called to give an eta my phone died! Where was my charger? That's right, in my truck that I was locked out of. Thankfully, my buddy was with me and I was able to call them back on his phone, lest they cancel the pickup. He also had a charger and I was able to recharged the phone.

Today I talked to the auto repair shop in Ridgecrest and they determined the catalytic converters are clogged and need replacing. That explained to me why the hose from the EGR modulator to the EGR vacuum came off. The back blow from the clogged converter likely did it. Anyway, the repair shop wanted to use welded on CATs at a price of around $700 plus dollars. I looked and found bolt on CATs for $339 for the front and $269 for the back. It would shave about 2 plus hours of work and save me about $300 overall. The shop said that if I used different parts that they wouldn't warrant the work. I told them I wasn't going to drive 155 miles from my house to make a warranty claim anyways, I would use my local mechanic. (BTW mucho kudos to those that can wrench on their own vehicles.)
I ended up sending the link to the mechanic so he can look at it. If he doesn't like that, I found some weld on CATs at AutoZone that are California CARB compliant for $182 each. Either way, I am saving that $300!

Not sure how I missed this thread but nice work on the build so far! Coming along great. I love the Goose-Gear platform. I still need my second row so I just have the dual rear drawers in my 80. But eventually I'd love to add the rest of the platform when I don't need the middle row anymore. Anyway, had to respond so I can follow the rest. 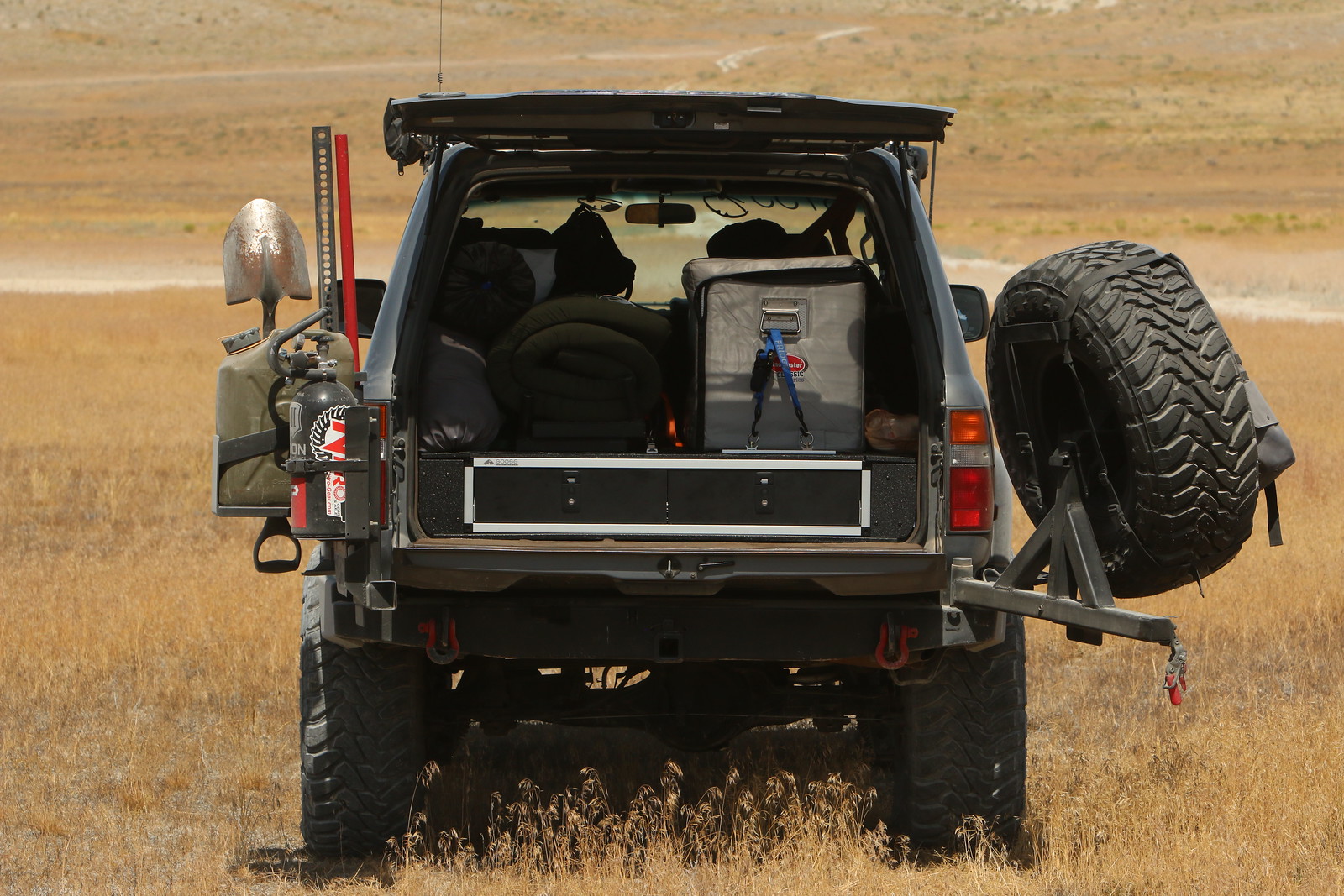 Box Rocket said:
Not sure how I missed this thread but nice work on the build so far! Coming along great. I love the Goose-Gear platform. I still need my second row so I just have the dual rear drawers in my 80. But eventually I'd love to add the rest of the platform when I don't need the middle row anymore. Anyway, had to respond so I can follow the rest.

You have a sweet setup yourself!

Did a little wheeling this weekend on Bee Canyon Truck Trail in Idyllwild. Had a good time, nothing too technical. 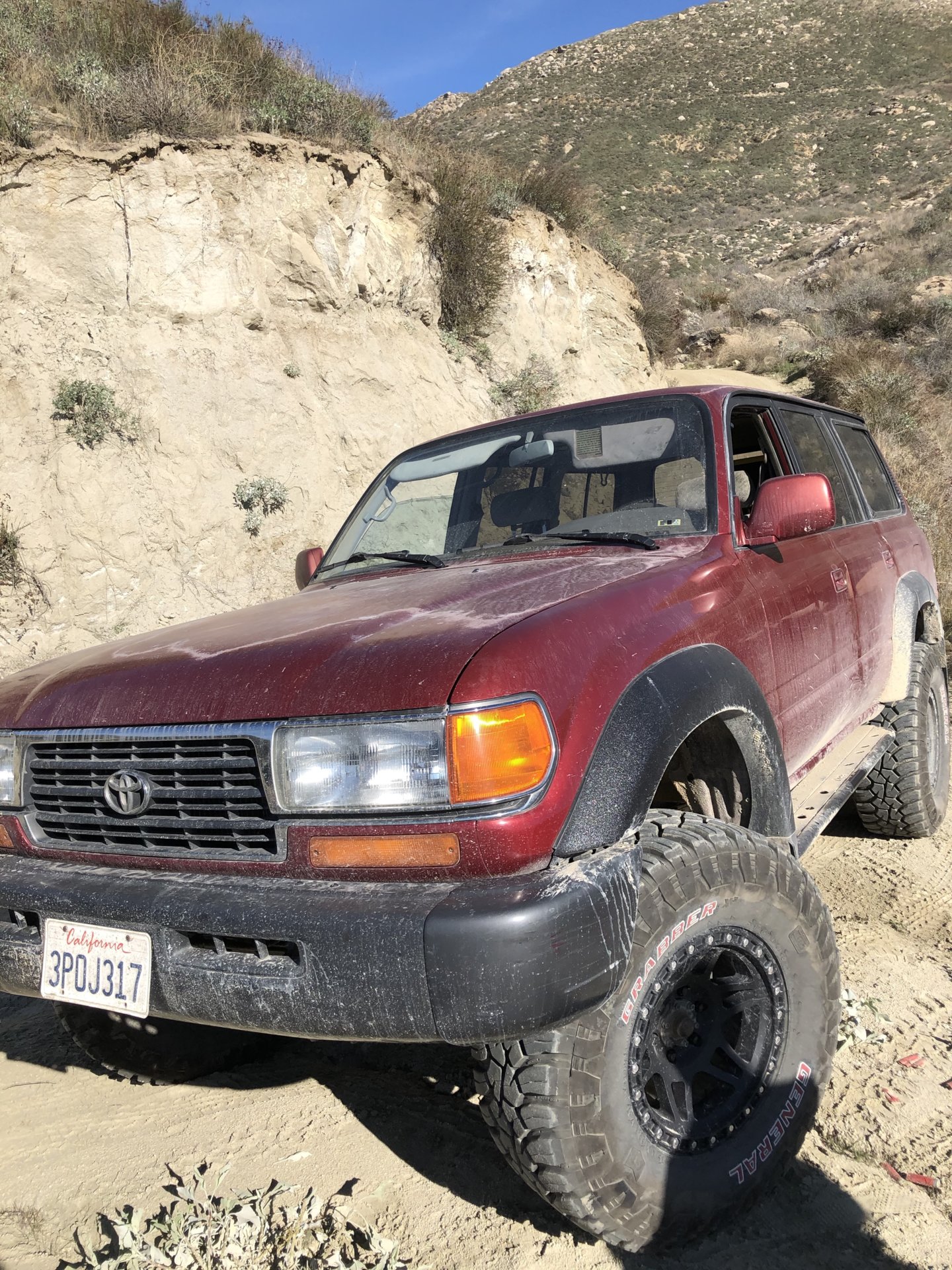 Today I did a little work on the GG 80. The 80 was not water tight. It was leaking from the driver's side door. I got a replacement rubber seal from @Deathvalleypaul and installed it. Problem solved.

Today it was time to to change the oil on the 80. For about a dollar more than Fram you can go OEM. Who wouldn't? 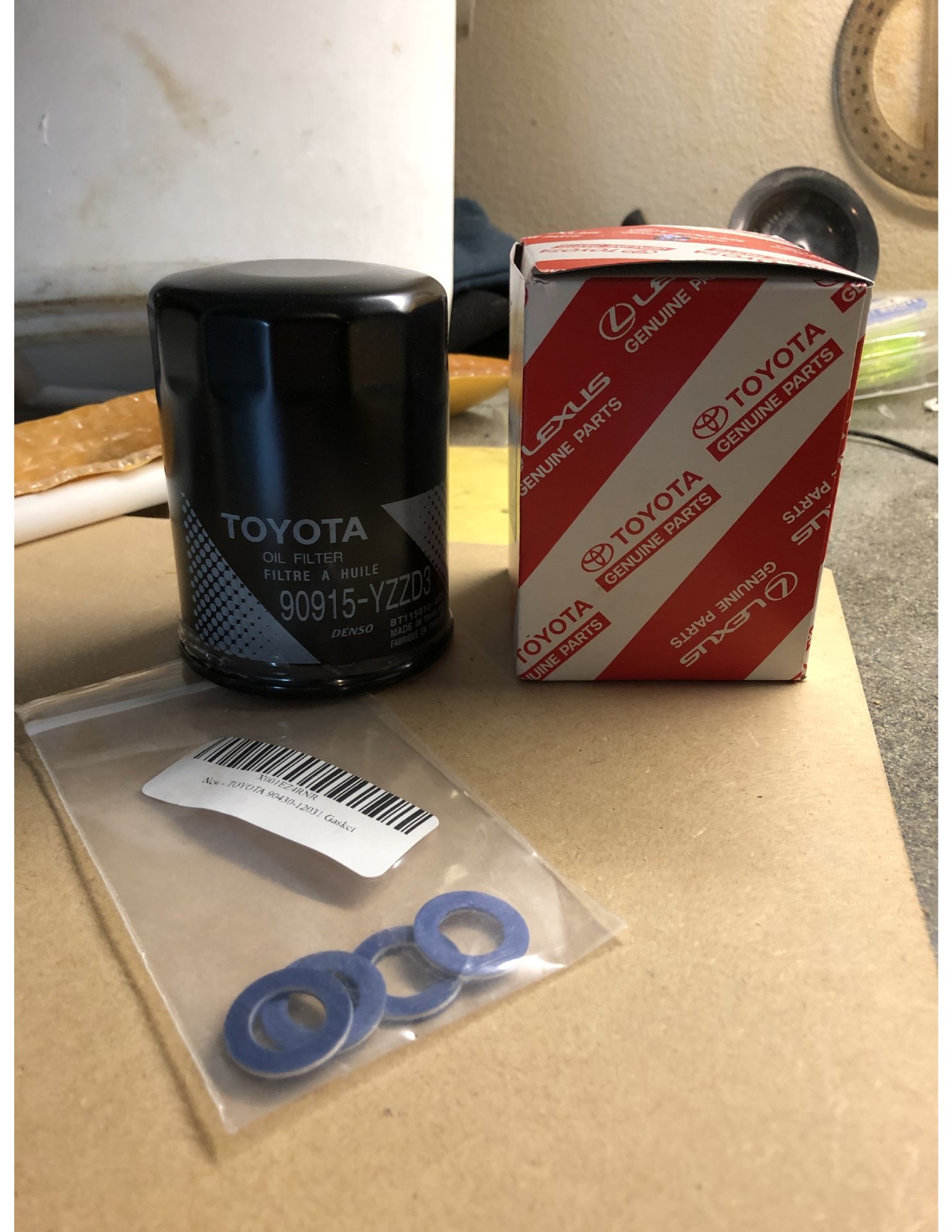 It's been pretty quiet on the Goose Gear 80 build lately. I just got something fixed that I've been wanting to get done for some time. When I bought the 80 you could not open the rear lift gate with the key. I would have to crawl into the back seat and open it from inside. Shortly after I got the LC I replaced the front passenger door because it had been damaged in an accident. Consequently, the only door that would open with a key was the driver side door. I was a little leery that it would fail in Death Valley or some other remote place and I would be have to break a window to get in.

So this week I finally found a lock smith that worked on cars. It seems most auto "locksmiths" only cut keys but don't have the ability to fix them. I took the 80 in the morning and they fixed the rear hatch lock immediately. They pulled out of the lock cylinder what appeared to be a ball point pen spring. With a little lubricant, the lock is as good as new.

While I was at work they re-keyed the passenger door lock to match the rest of the car. I have to admit, it feels nice to be able to open the passenger door and rear hatch with a key. I felt like a kid in a candy store. The little fixes like this are the ones I seem to enjoy the most. Fixing those things that happened as a result of neglect. These fixes aren't glamorous like adding a 270 degree awning or a Slee bumper, but make every day driving much more satisfying. Bringing the 80 back up to snuff is an enjoyable pastime.
You must log in or register to reply here.
Share:
Facebook Twitter Reddit Pinterest Tumblr WhatsApp Email Link