I definitely don’t like wiring....such a slow process. But I did get some good usage out of my Rhino 5200 label maker.

I got all my sensor cables routed into the shift console, ran power and grounds for all from the switched side of the center console fuse panel and calibrated the AFR wide-band sensor.

I also installed a switch in the trigger wire for the York so I can control the pump from in the cab or under the dash. 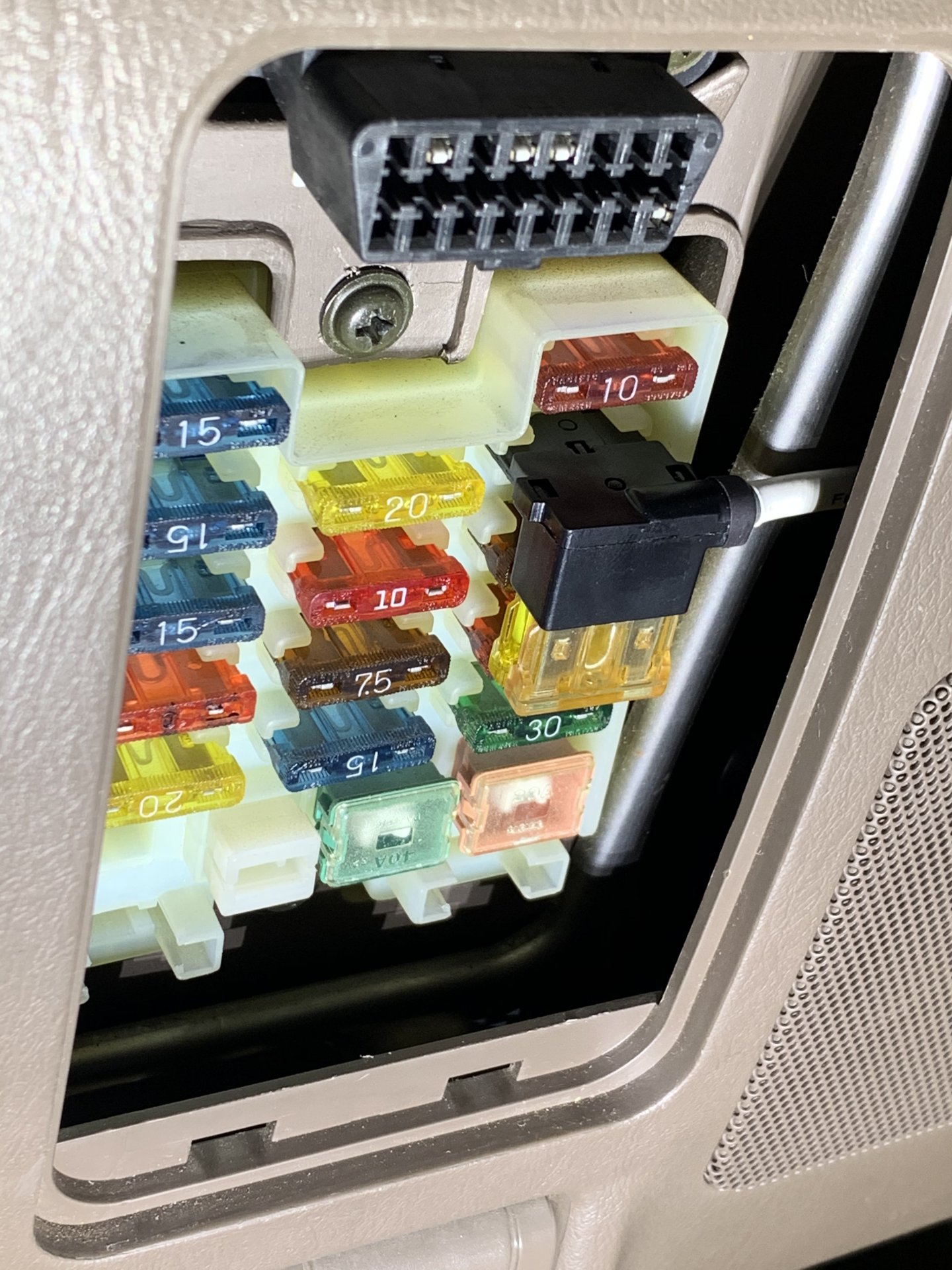 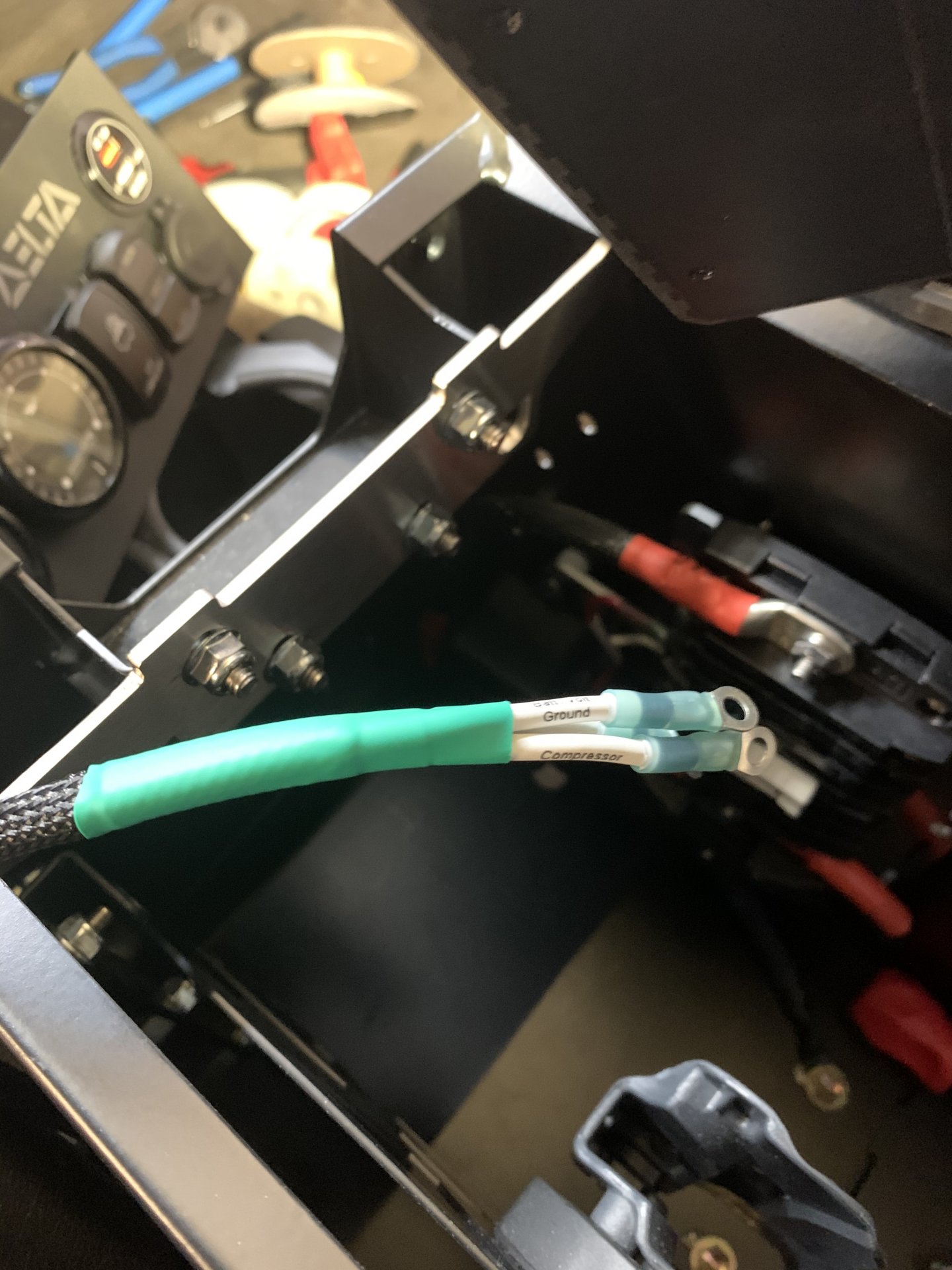 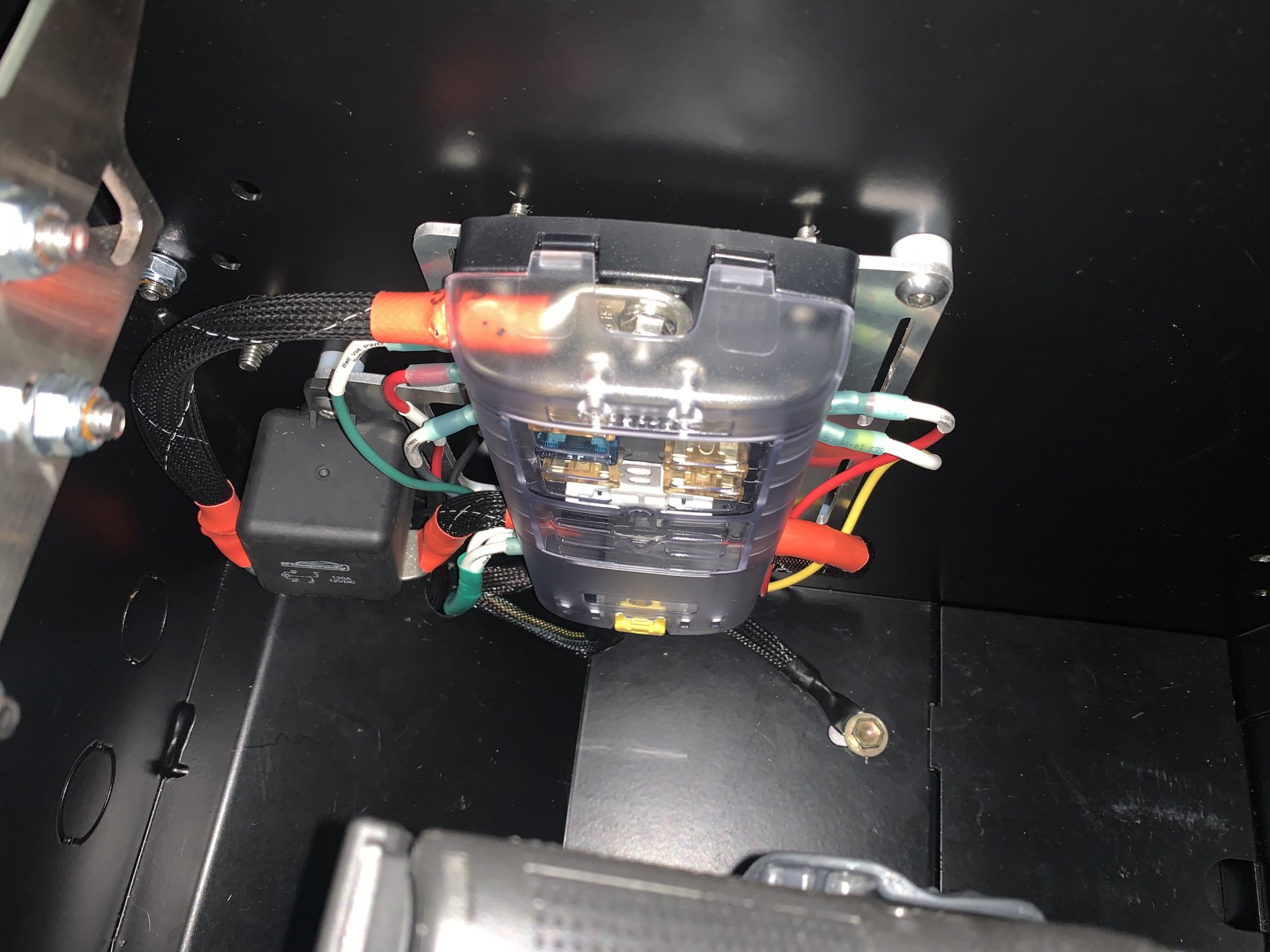 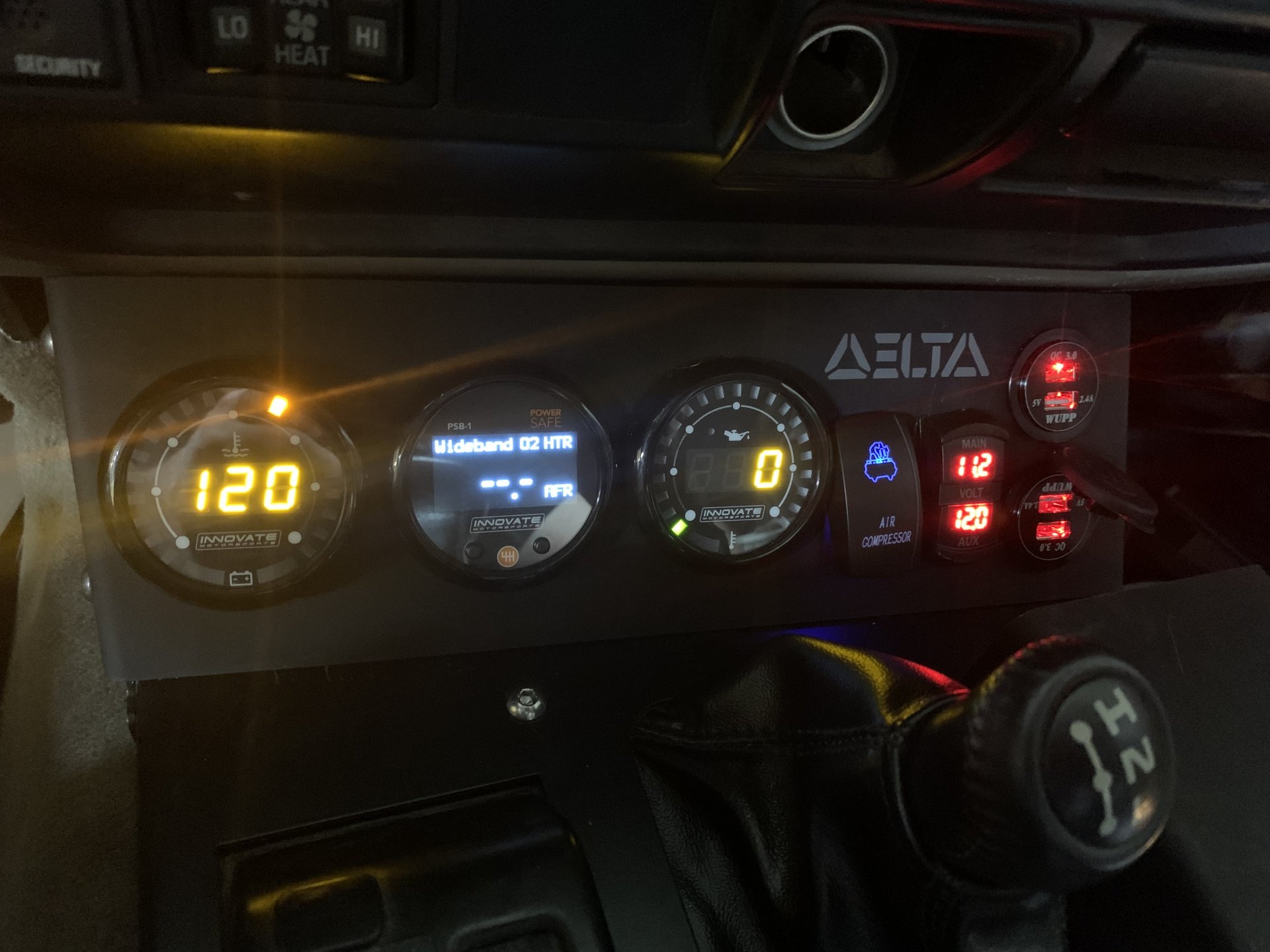 The Rhino kinda adds a little excitement to wiring now, doesn’t it? Makes it a little more tolerable

It definitely helps prevent the insanity from setting in. Now if only it could do something to make routing wires easier or reduce the oven like temps in the truck...running that heat gun certainly gets everything toasty.
Last edited: Jun 24, 2020

I finished up the console wiring on Wednesday and took the LX out for a quick shake down run. AFR readings were all good, but my temps were higher than I like. 212 after a long 10% grade, and 208-210 while sitting at traffic lights.

On Thursday morning I ran to pick up a few bottles of 15k and 60k CST from a local hobby store. Mixing those two 50/50 results in 30k CST. I pulled the fan and replaced the CST with the 30k, put it back together and took it for a long shakedown run. 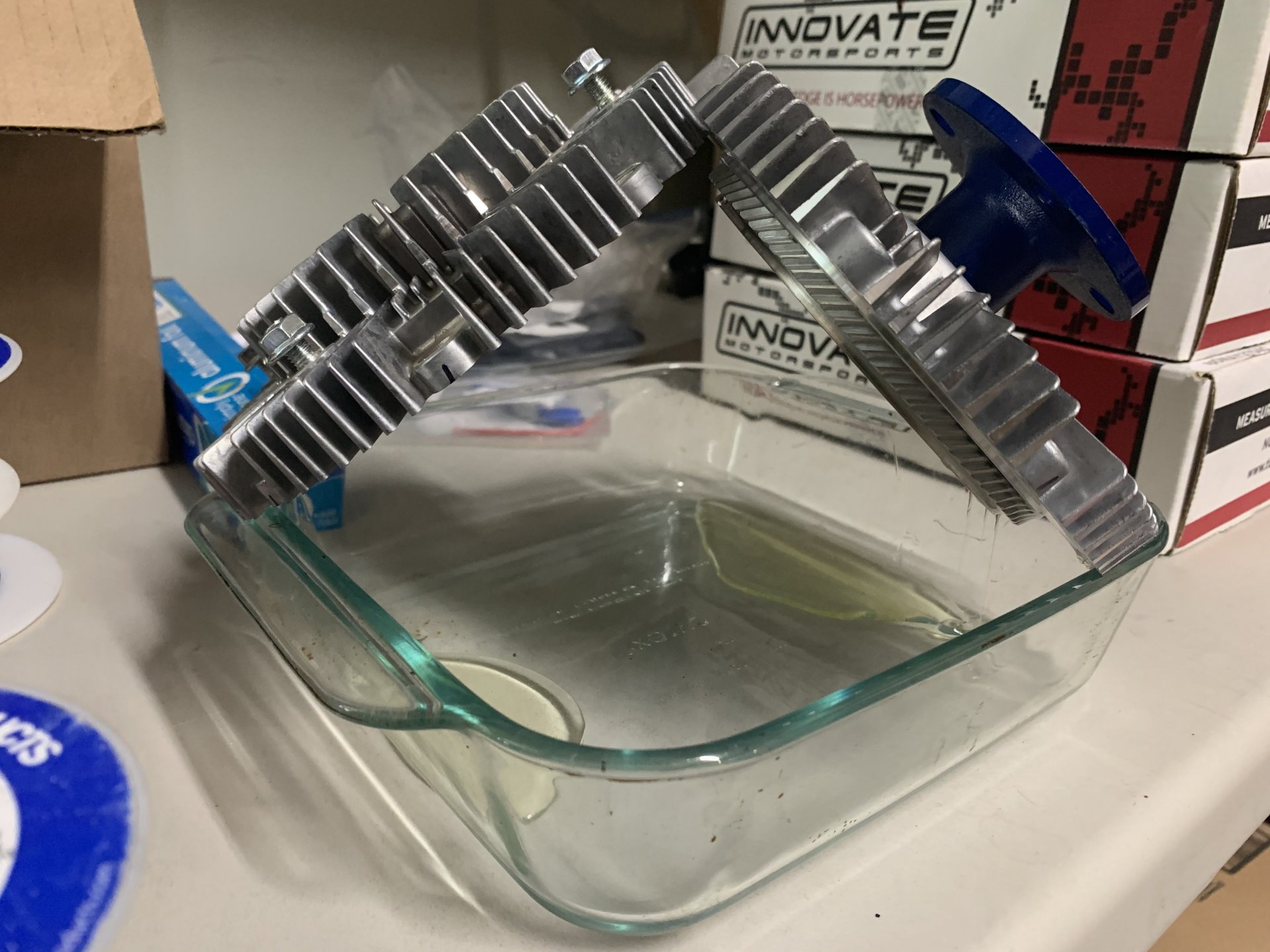 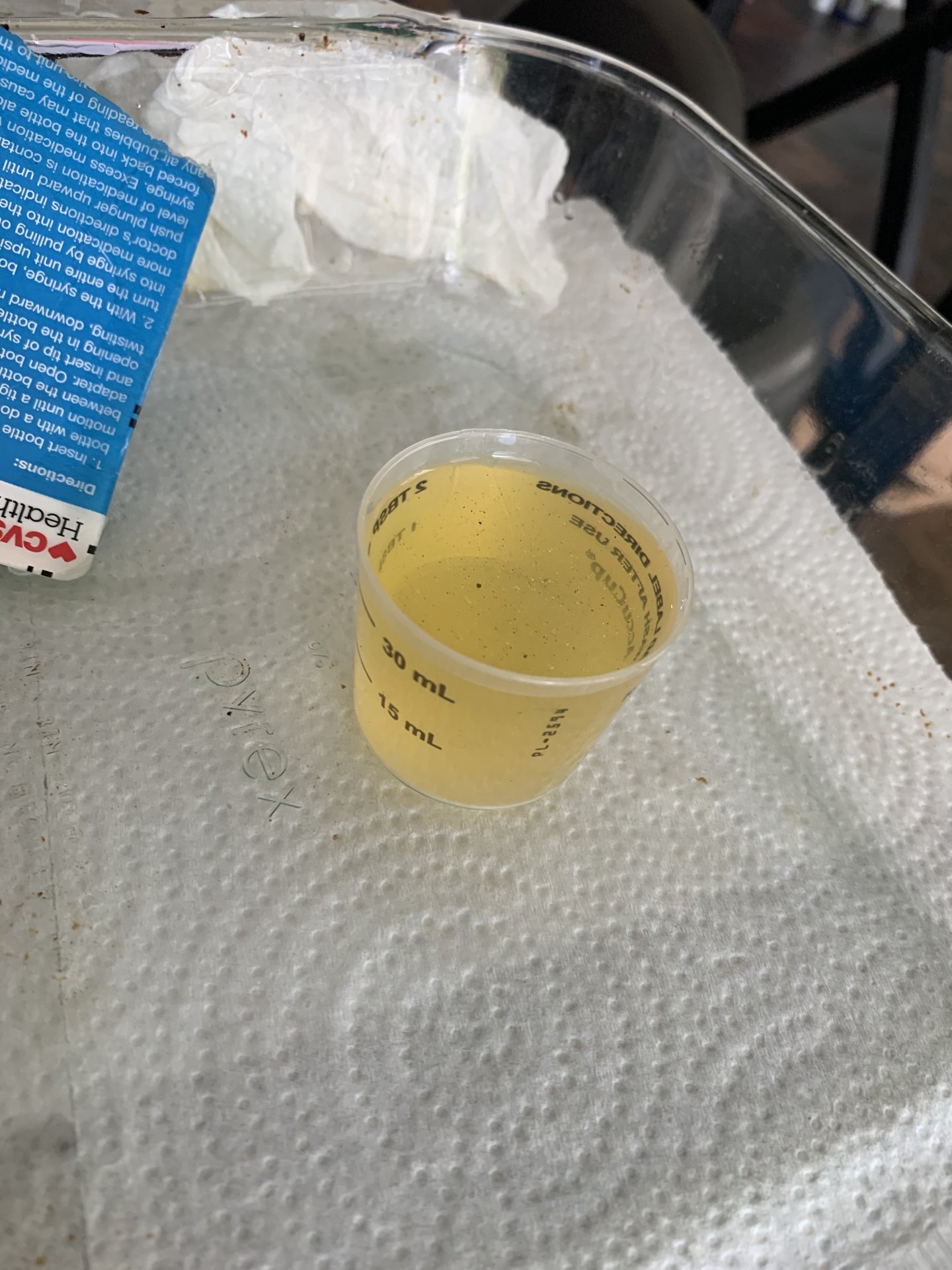 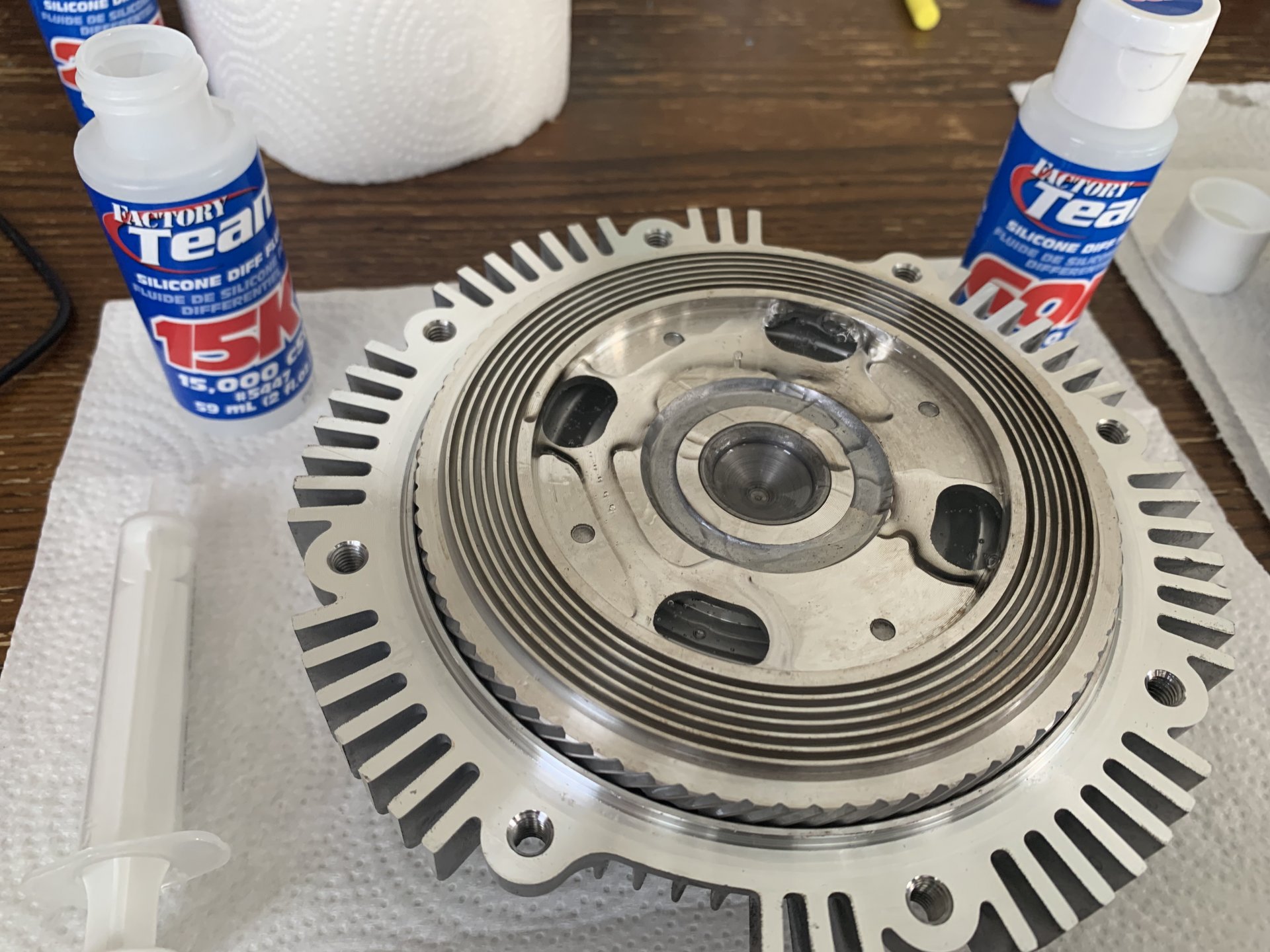 This morning as I was leaving to drive up to Boise I noticed a small puddle of motor oil on the garage floor...bugger. Turbo oil drain was leaking at a fairly good rate. The oil was leaking out between the hose and the heat sheath. I checked the 10AN fitting and flange bolts at the turbo and both were tight...albeit it’s was a total PIA to get tools onto those with the turbo in the truck.

Since it was Friday afternoon and I didn’t want to lose the whole weekend, I ran to a local hose supply shop and had them make me up a new hose. I was hoping to have them pressure test the original hose, but they said they couldn’t....I’ll do that later to see if it’s still good. 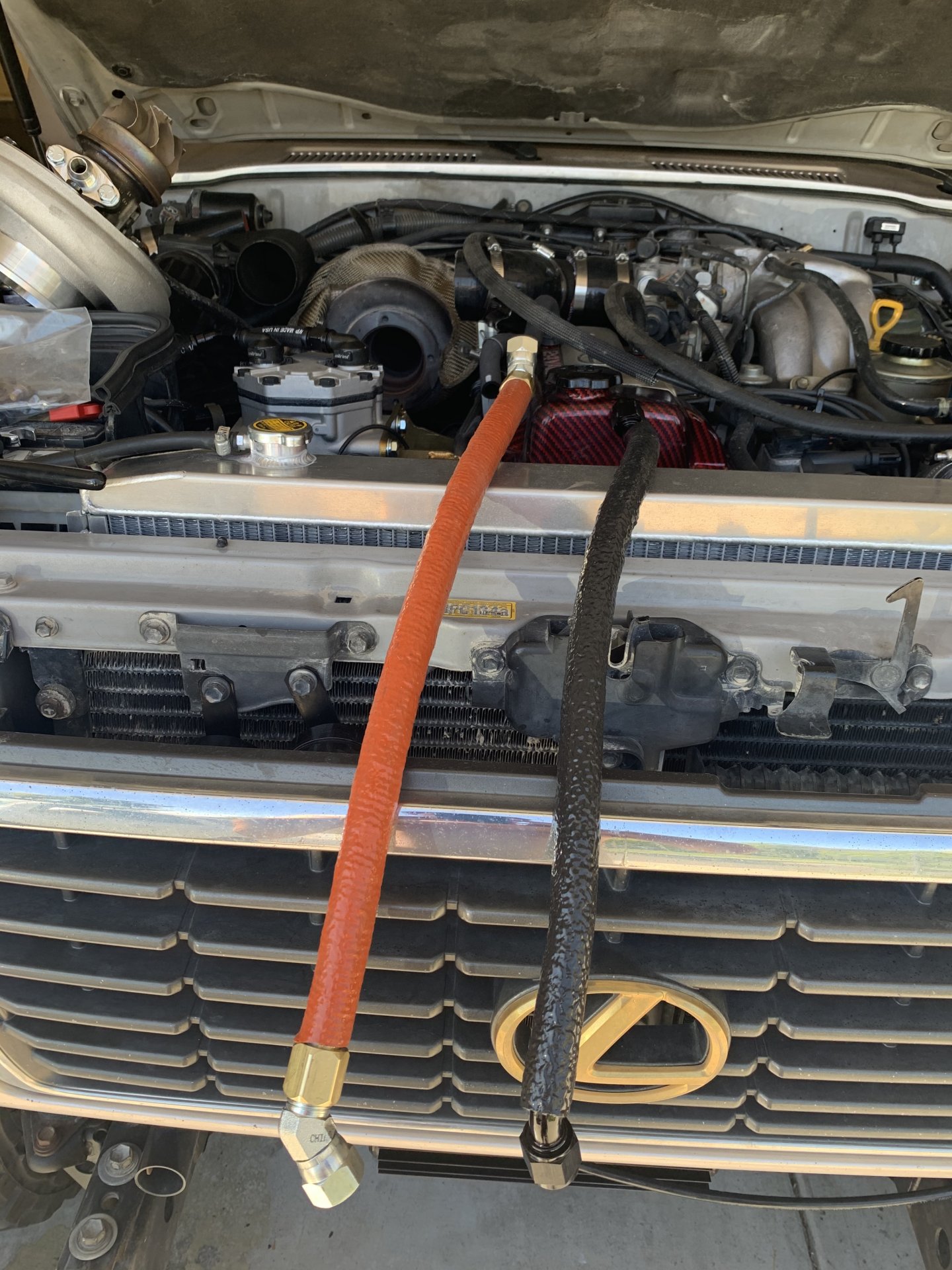 I separated the compressor from the exhaust housing so I could get a good look at the turbo flange and secure the new hose outside of the truck to make sure there isn’t a problem further up. I did it this way because it was less work that pulling the downpipe off. 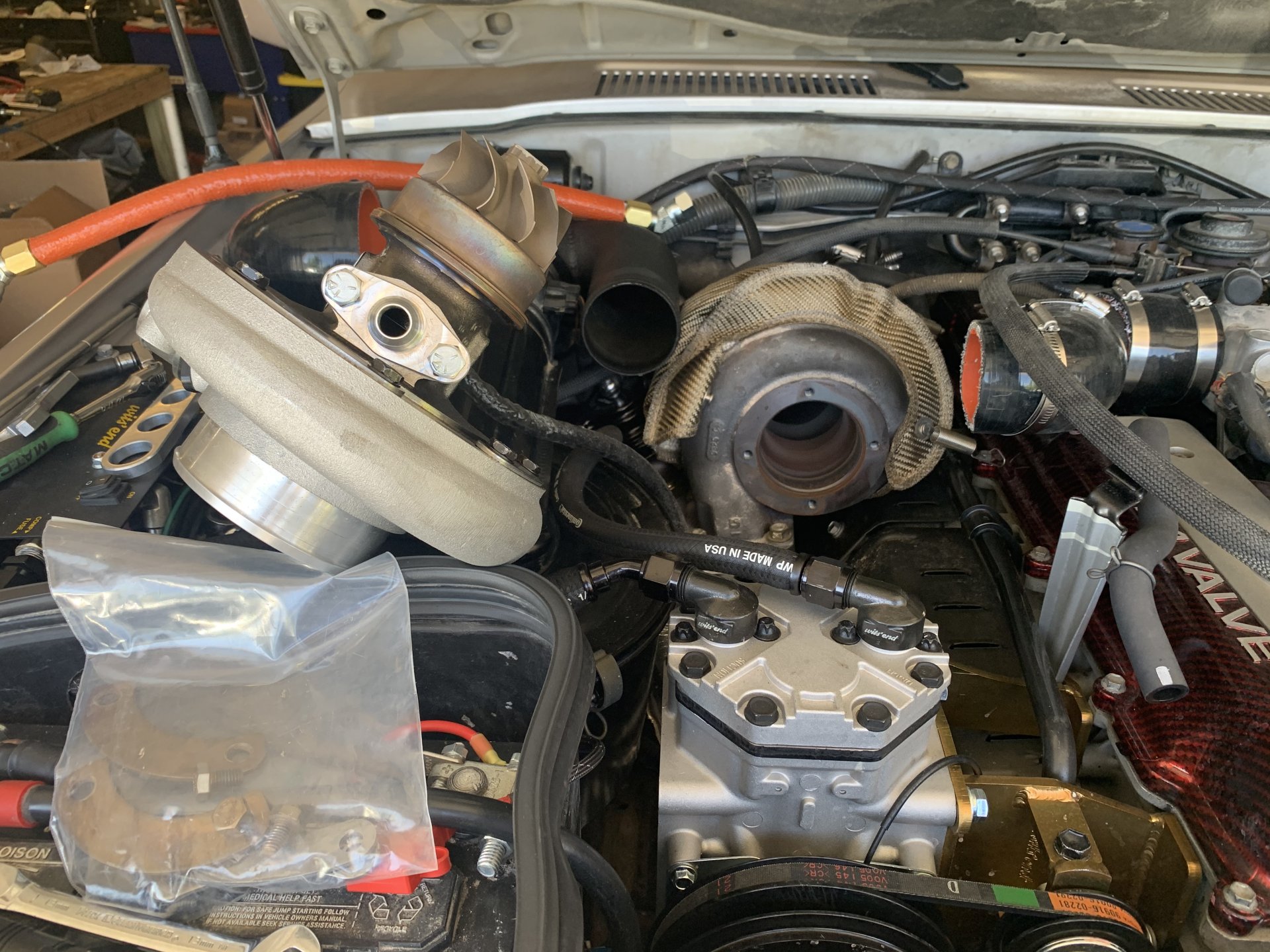 Flange looked good, no signs of leaking between the flange and the turbo. This leads me to believe either the 10AN fitting wasn’t tight enough or the hose itself has an issue. 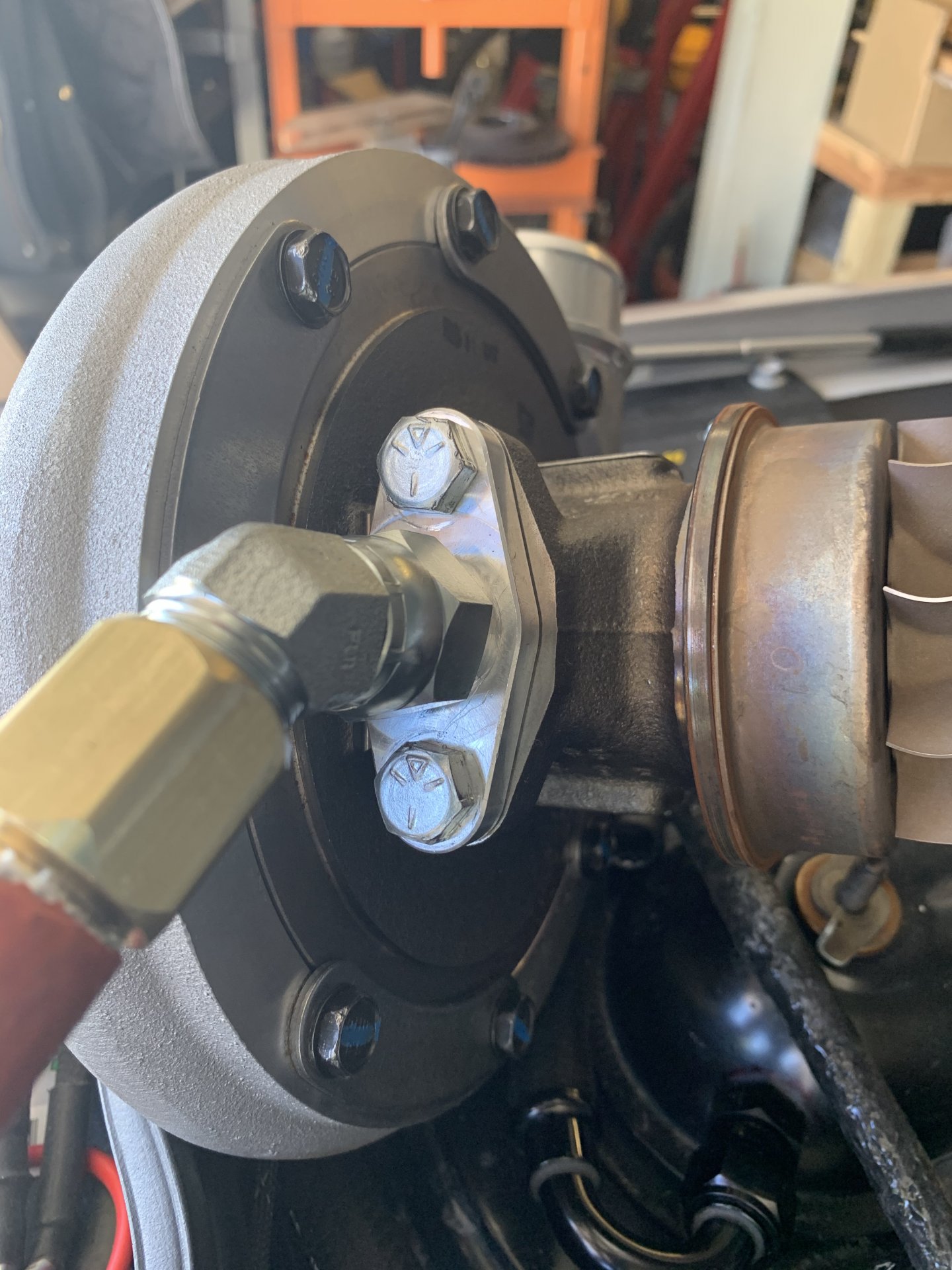 New hose went on, turbo went back together (that parts was not fun at all). Overall this job would have been a lot easier if I have NBA length arms, toddler sized hands and double jointed knuckles and elbows.

After putting it back together I let it run in the driveway for about 30 mins and so far no more oil leak. Fingers crossed that’s it, going to hit the road in the early AM for a few days camping in ID. 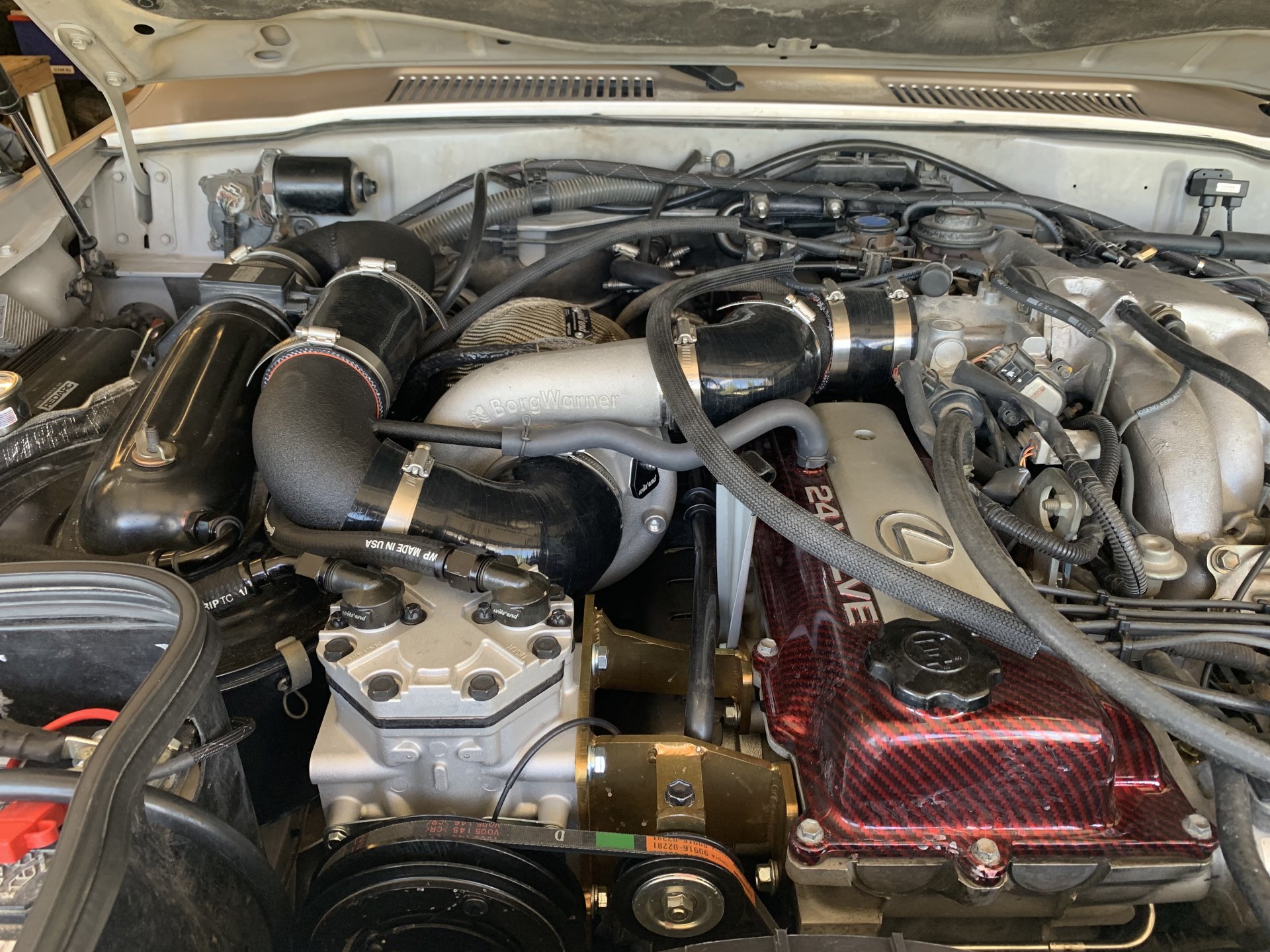 Brave man using that pan! I “borrowed“ the glass measuring cup to use for something in the garage years ago. Didn’t go over well.

Mr Cimarron said:
Brave man using that pan! I “borrowed“ the glass measuring cup to use for something in the garage years ago. Didn’t go over well.

I definitely got the look and a comment or two about what I was doing with her Pyrex. I used purple degreaser to scrub it out...took about 5 mins for it to break down the silicone...no issues.

Picked up a driver side fire extinguisher mount from @NLXTACY latest batch to match the passenger side one. Order up a few Halotron extinguishers and a pair of NB300 mounts. Same setup as I have in the Cummins. Got them all bolted in ready to hopefully never be needed. 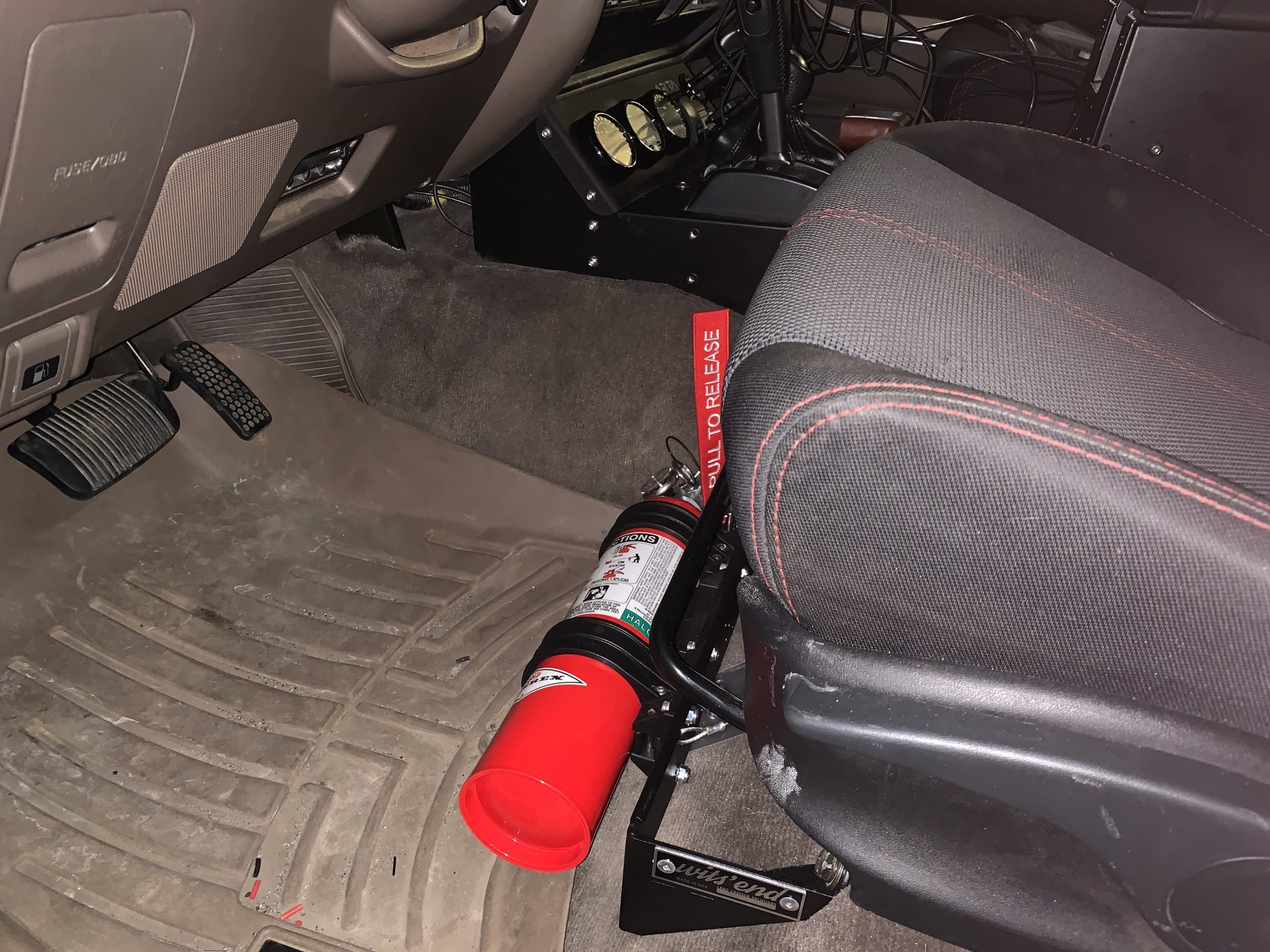 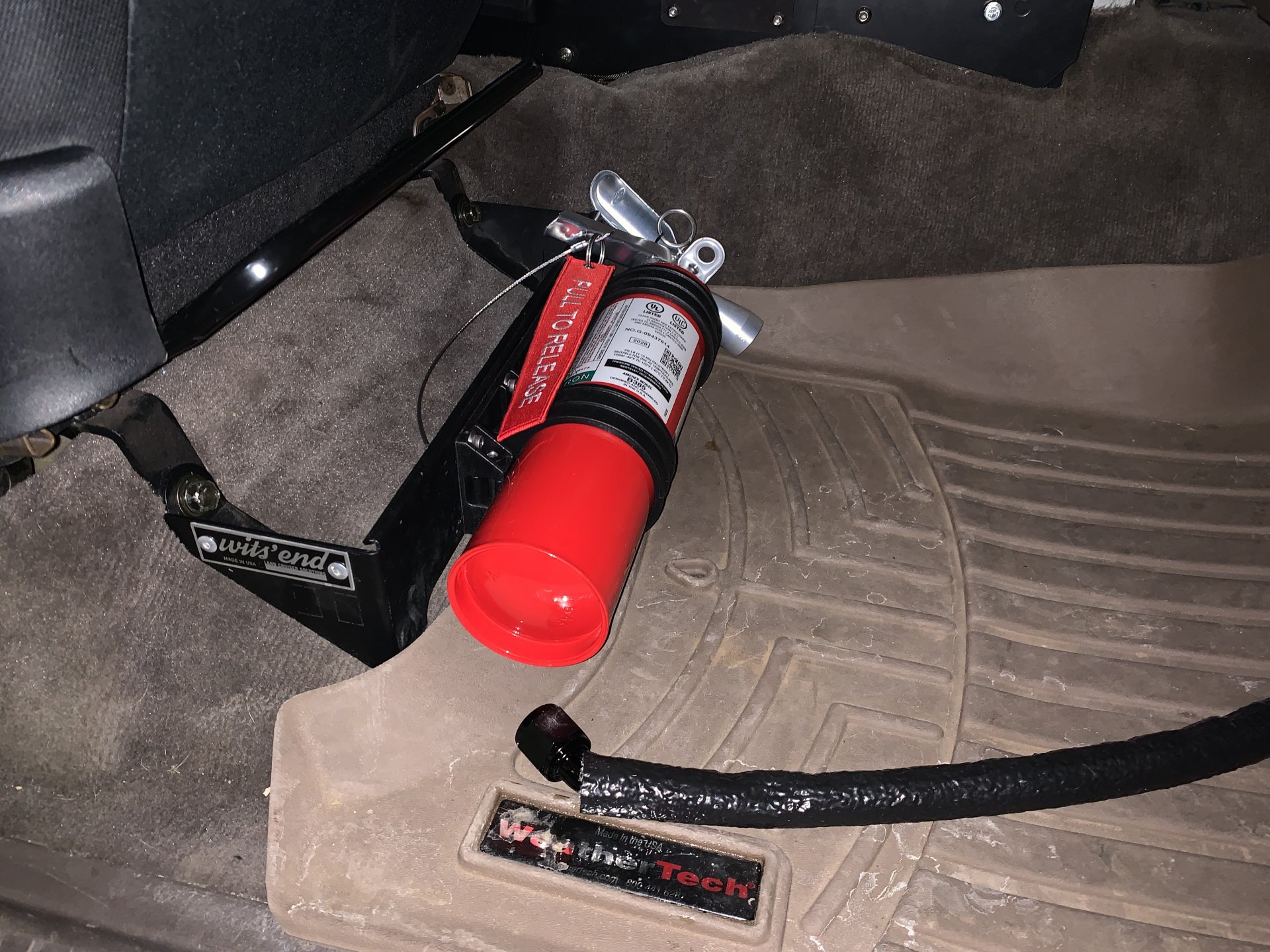 Just got back home after a successful trip up to Idaho for a few days exploring and camping with @Delta VS in the mountains.

Spent a couple nights camping by mountain rivers/streams and even woke up to snow on Monday morning. 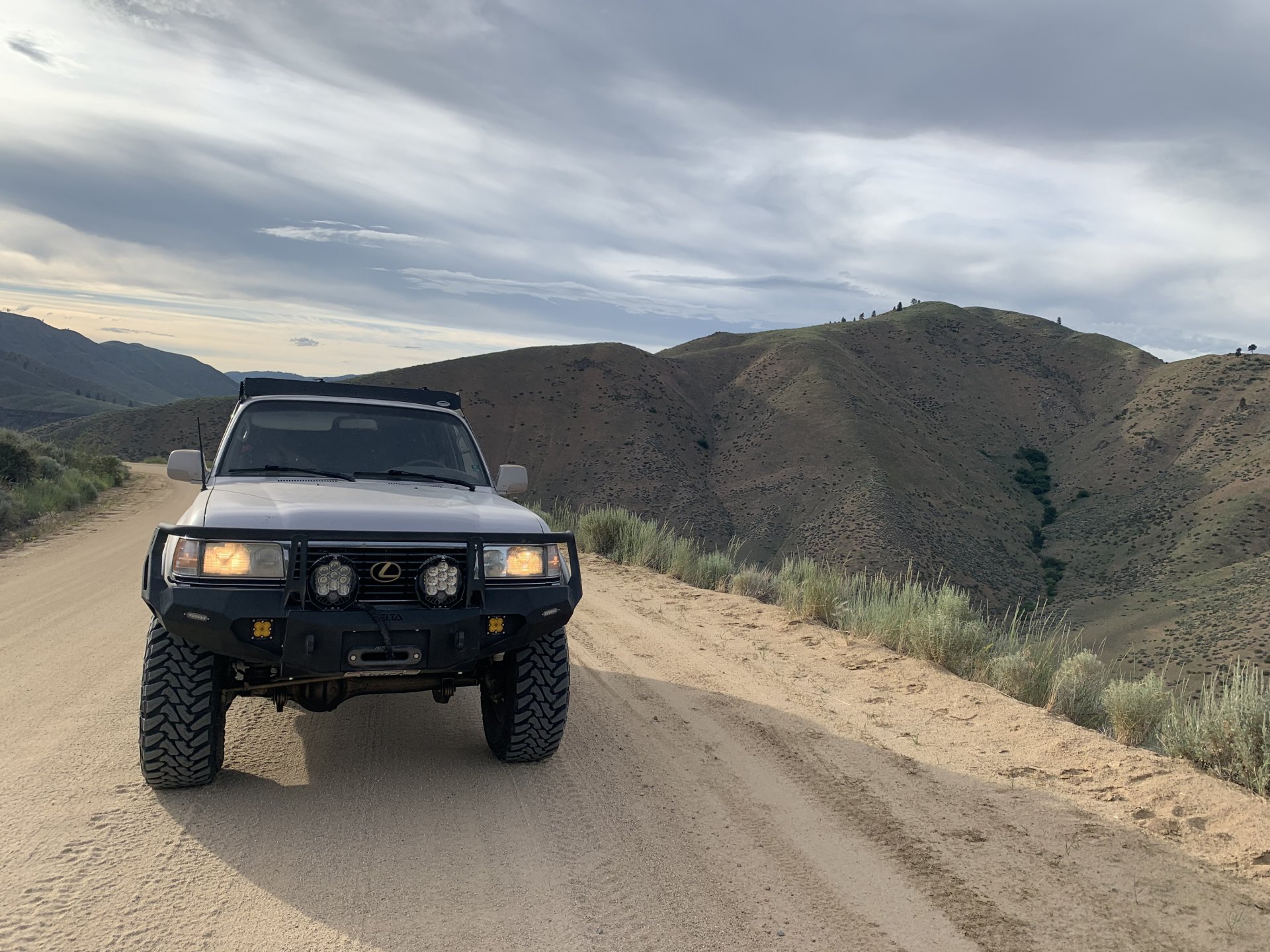 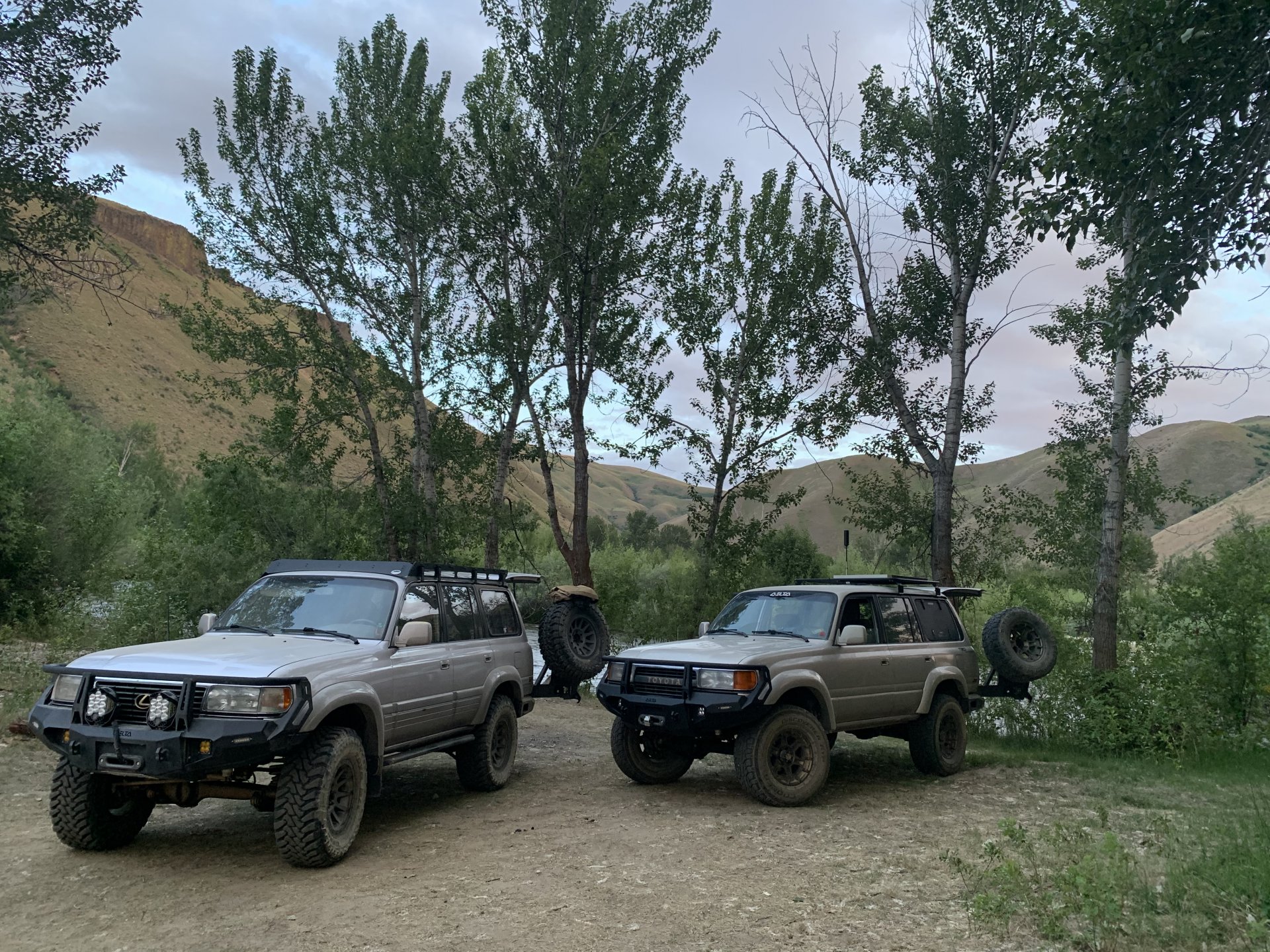 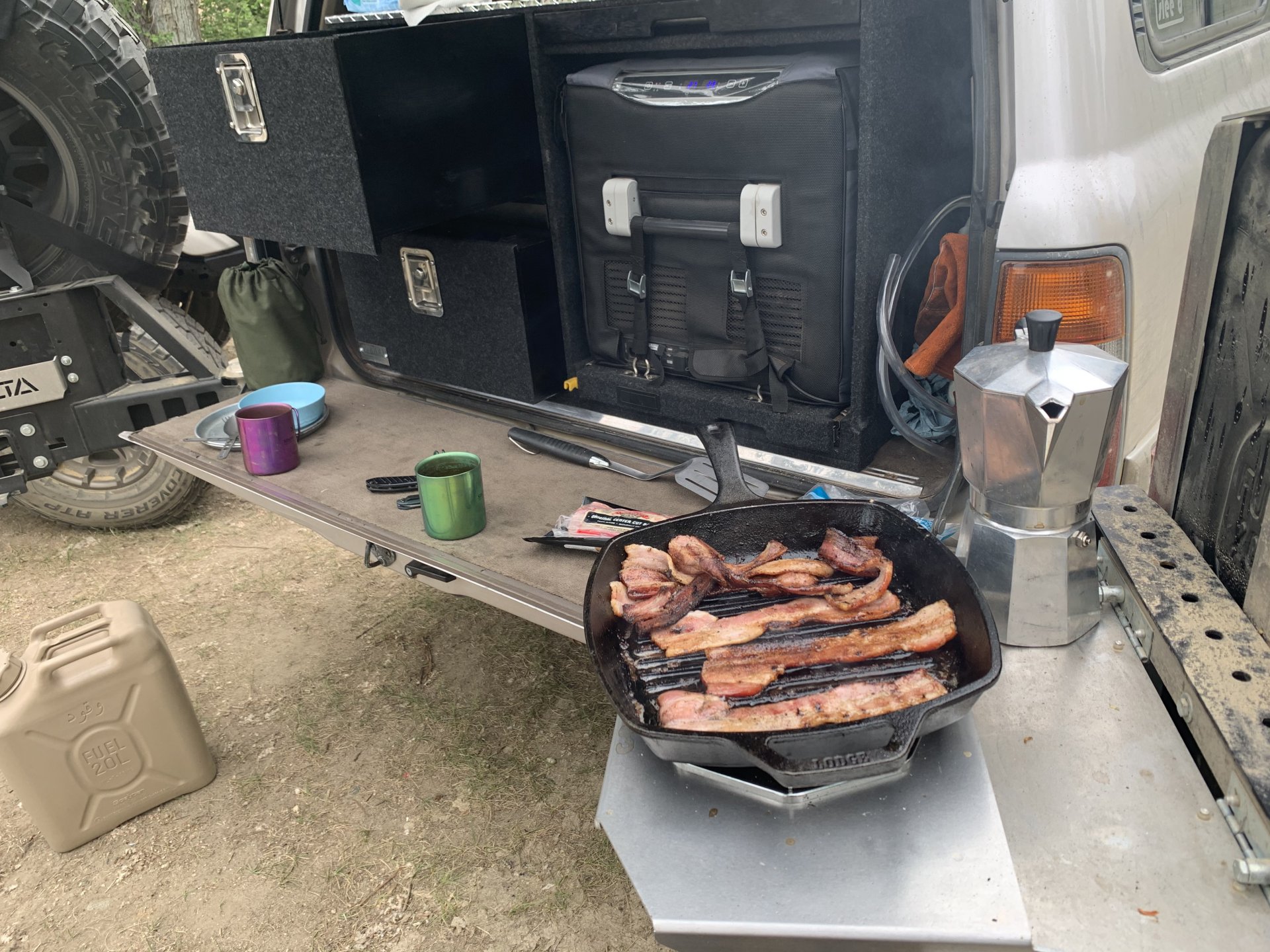 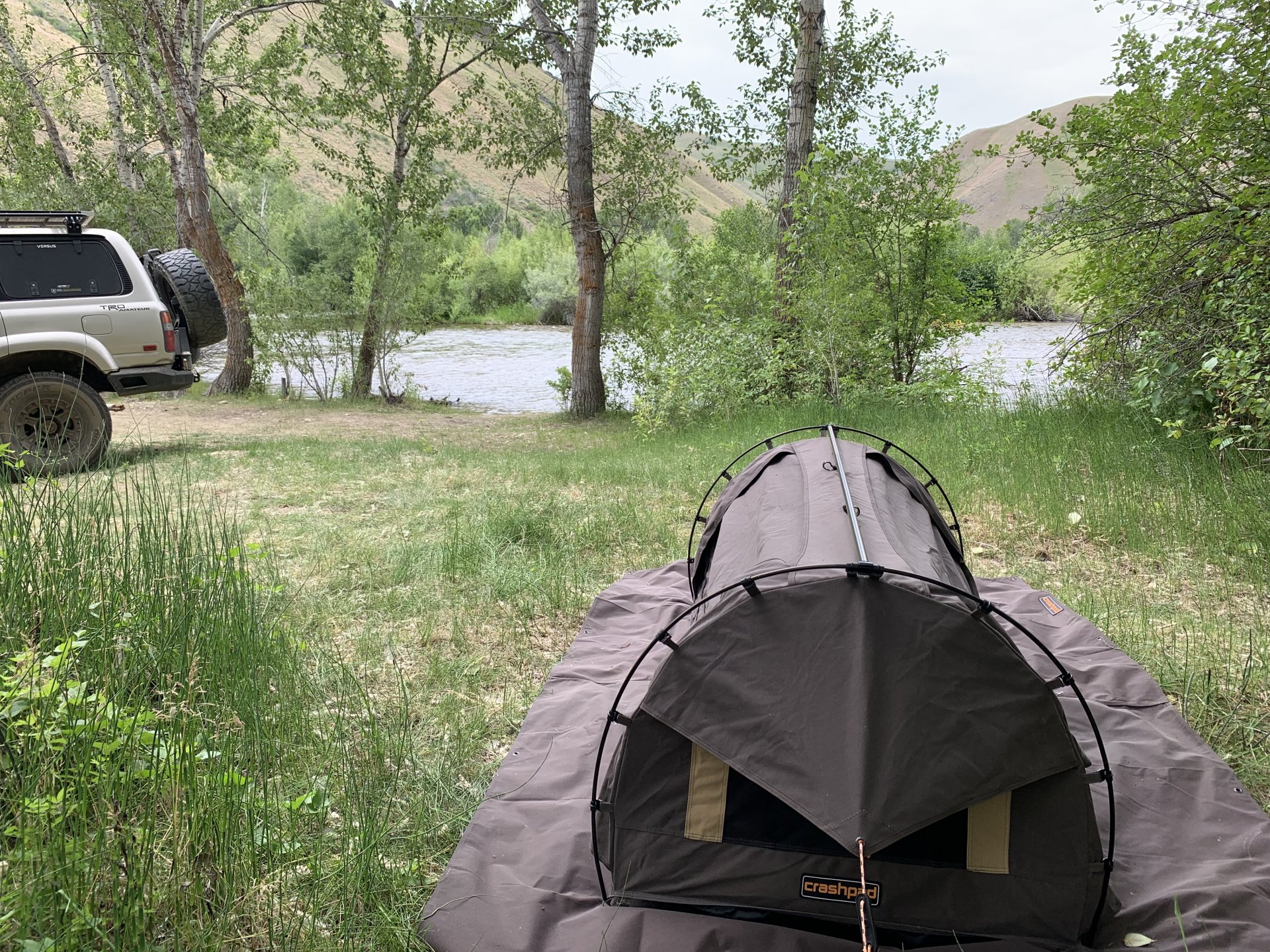 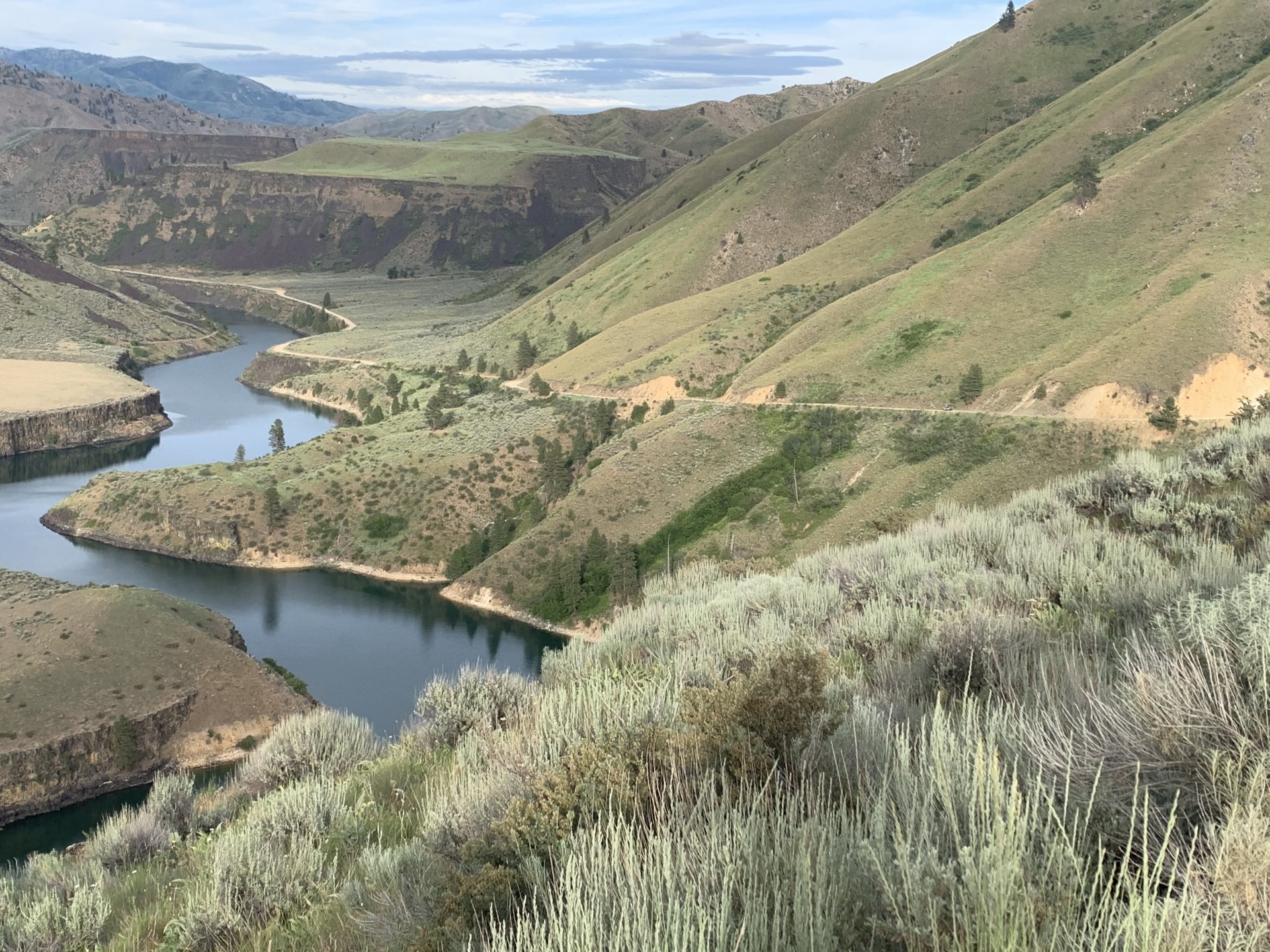 What a great spot and those @Delta VS bumpers look awesome!

scottryana said:
What a great spot and those @Delta VS bumpers look awesome!
Click to expand...

Yes it was a great weekend and these delta bumpers are pieces of art. I almost gave mine a real good test when a fairly large buck decided to leap out in front of me at speed. I managed to swerve behind him and avoid collision, but it was a game of inches.

Few more pics from this weekend. Dave found an old mining cabin in the mountains that we stopped at for a look around. 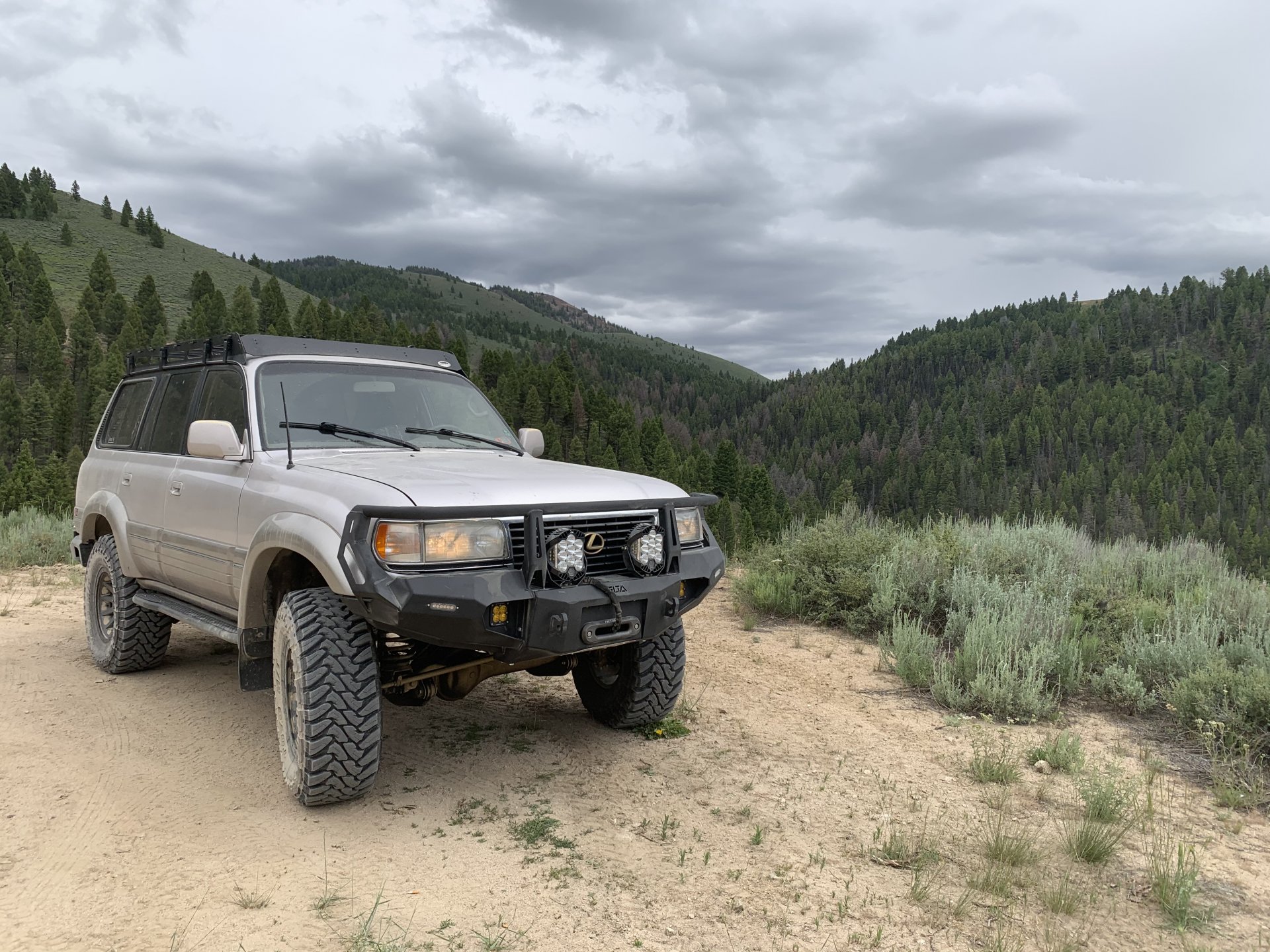 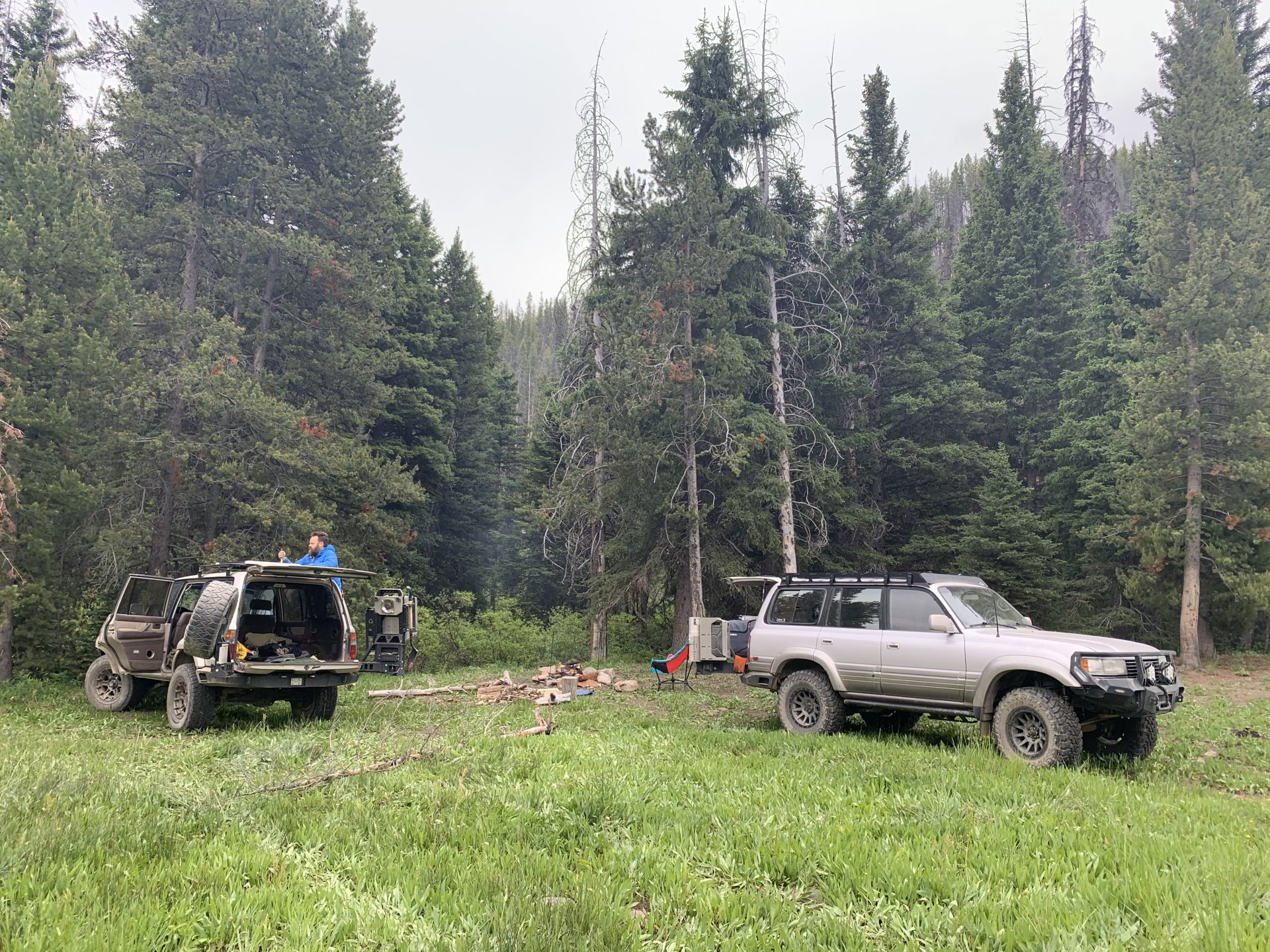 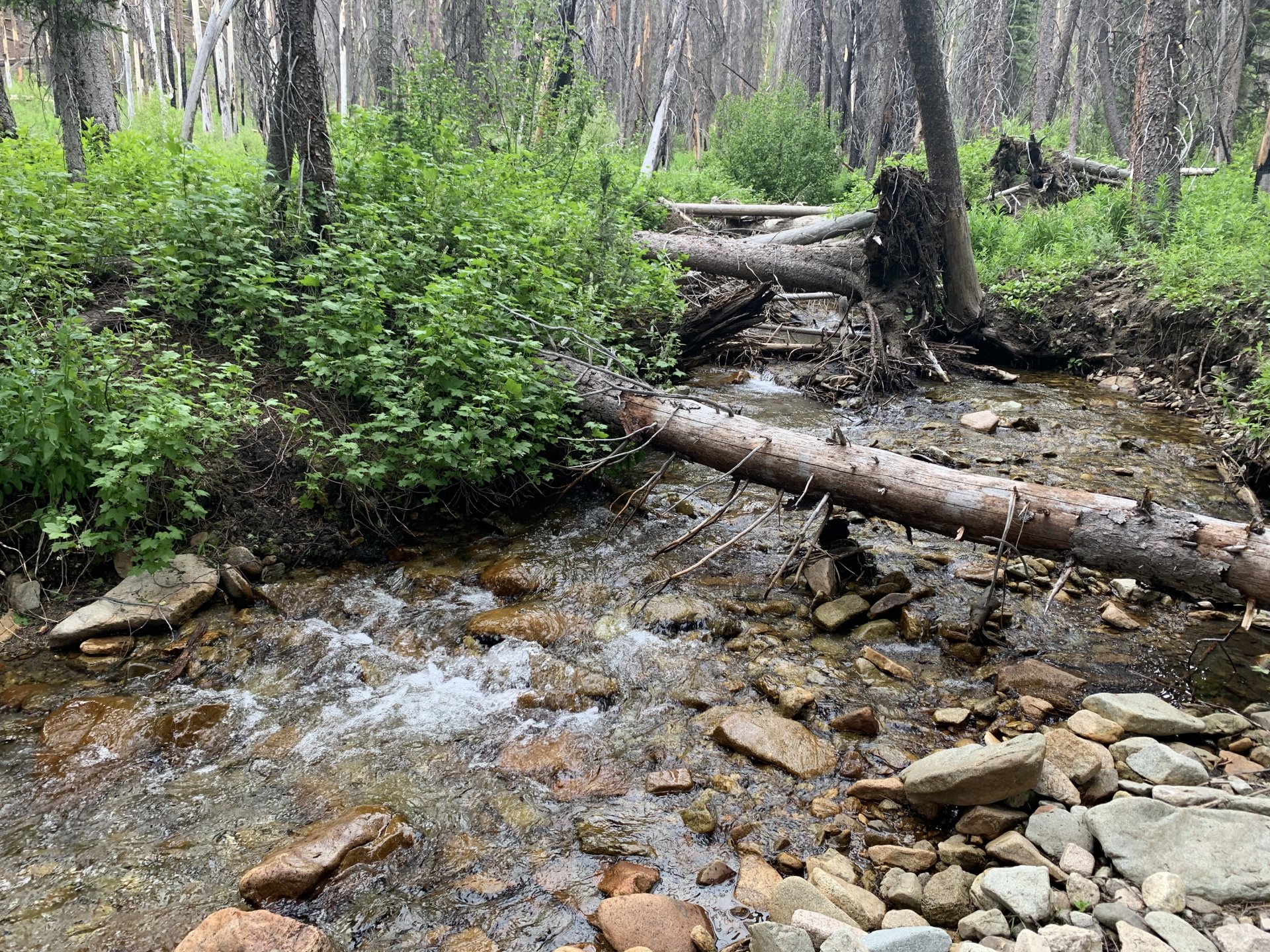 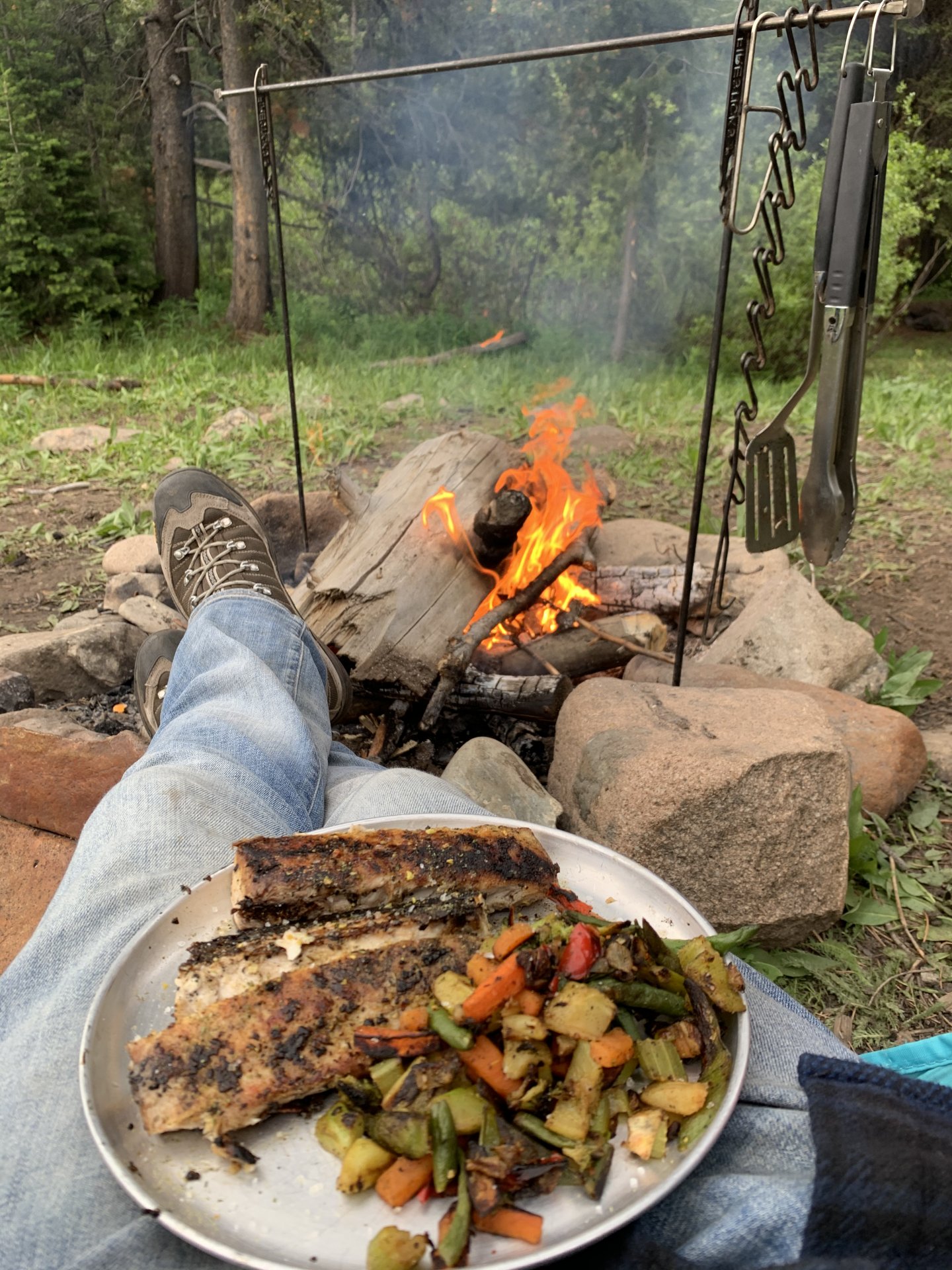 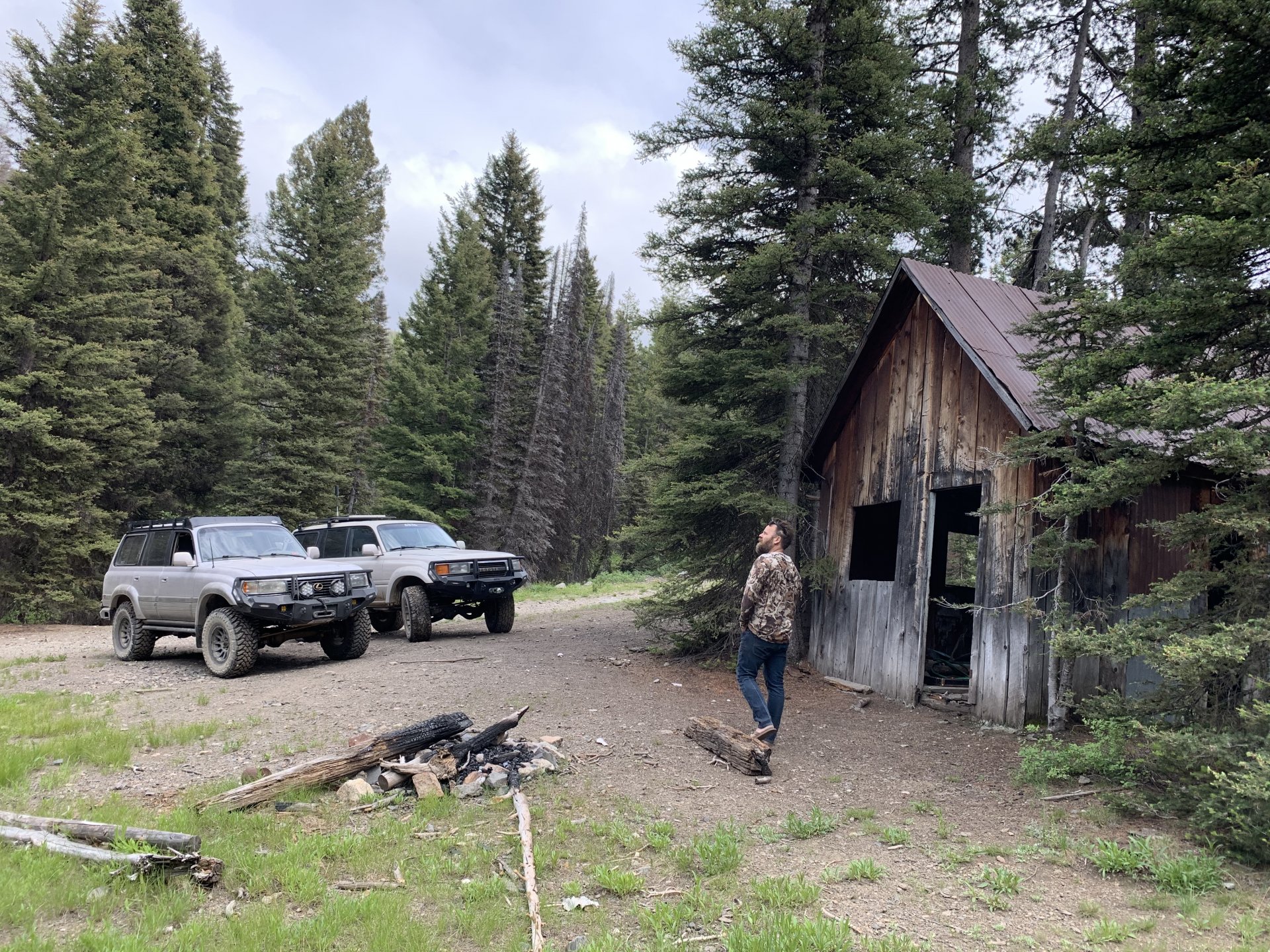 Great weekend Morgan! Thanks for making it up, and all the awesome food!

How is the turbo vs the SC?

asuddendeath said:
How is the turbo vs the SC?
Click to expand...

Once I get my under hood temps and coolant temps a bit cooler I will be able to flog it a bit more. So far from what I can tell the turbo has more lag (its a big turbo) whereas the SC hits instantly. The feel at highways speeds is fairly similar, but I also am not getting all the boost that I should yet. I maxed out at 5.7psi, but a usual pull won't see above 4.5psi. I should be able to increase that up to 7.25, which will likely make the highway pull on the turbo considerably more noticeable that the SC.

Where did you source the Crashpad swag from?

bj70_guy said:
he Crashpad swag from
Click to expand... 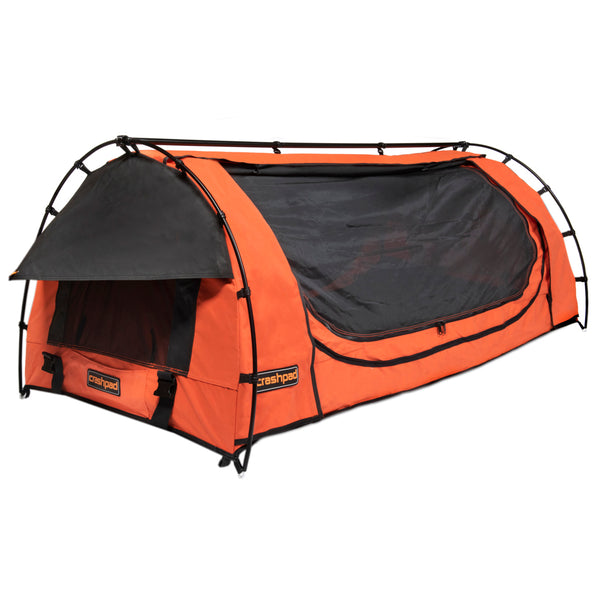 We have built a tough, durable range of single and double swag tents for camping, 4wd touring and fishing trips. Check out the range below to find a swag tent suitable for your needs.

On their website. Shipping to the US wasn't bad. Really good quality swag and it held up nice under rain and snow all night Sunday night/Monday morning.

We have built a tough, durable range of single and double swag tents for camping, 4wd touring and fishing trips. Check out the range below to find a swag tent suitable for your needs.

On their website. Shipping to the US wasn't bad. Really good quality swag and it held up nice under rain and snow all night Sunday night/Monday morning.
Click to expand...

I like my Kodiak swag but if its raining you better be under an awning or get in quick because all the rain is getting in with you. I'm sure the side exit ones are better.

Mr Cimarron said:
t if its raining you better be under an awning or get in quick because all the rain is getting in with you. I'm sure
Click to expand...

Yes, the fabric overlap of the zipper is over-sized, so protects the zip really well. we got a good soaking, water was pooled around the swag in the morning, but I stayed dry. I was attempting to wait out the weather before getting out of bed, but it just wasn't stopping that day. Was a cold 33 degree morning.
You must log in or register to reply here.
Share:
Facebook Twitter Reddit Pinterest Tumblr WhatsApp Email Link