I bought my 94' Cruiser almost a year ago and have done many upgrades to it over the course of the last year. It came time to do another round of PM and upgrades and being it is my daily driver I HAD to get it all done in one weekend. I called up Cruiser Dan and Cruiser Outfitters to get am all the parts and seals I would need to complete the job. My goal was to completely rebuild the axles, install 4:88's, new brakes and brake fluid all the way around, new steering ends and do a cut & turn on the knuckles. Ambitious, yes I know but I like punishment.
I have done several C&T's over the years and on my particular Cruiser I did not have any driveline vibrations, so all I really needed to do was correct my castor. I had some yellow bushings for it, but since I was tearing the axle completely apart I decided to fix the castor the right way.
I am not here to say bushings are bad or plates are a Band-Aid, that has been discussed numerous times in many threads. This is how I choose to fix the castor. The Cruiser drove just fine before, but I knew it could always be better.
So here we go, I started by jacking up the Cruiser and making sure the front and rear ends were level, I did the 4:88's in the back too so I had to pull the tires and everything to get to the back. I cannot stress enough that this step is very critical to get the center of the hubs the same elevation off the ground, if they are not the castor measurements will change. Spend as much time as you need here. 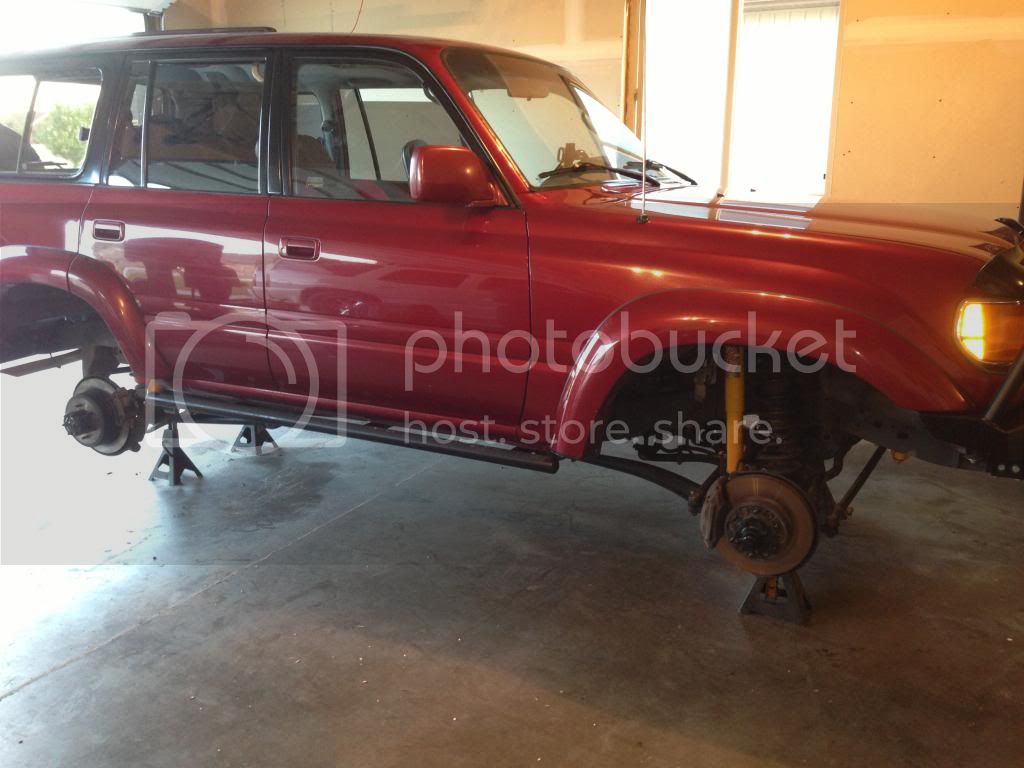 Next strip the axle down all the way to the bare knuckles, again I was doing the gears too so the differential came out, but is not necessary to pull out. 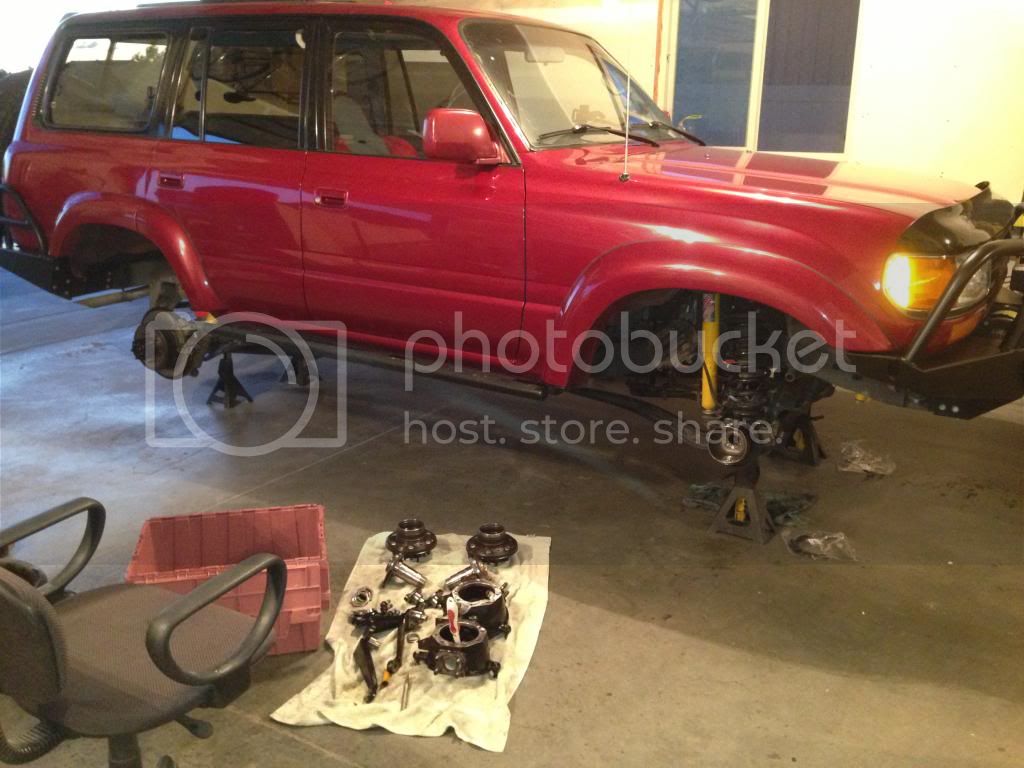 I then took some good measurements of where everything was at stock, pretty much what I figured it was sitting about .5*. 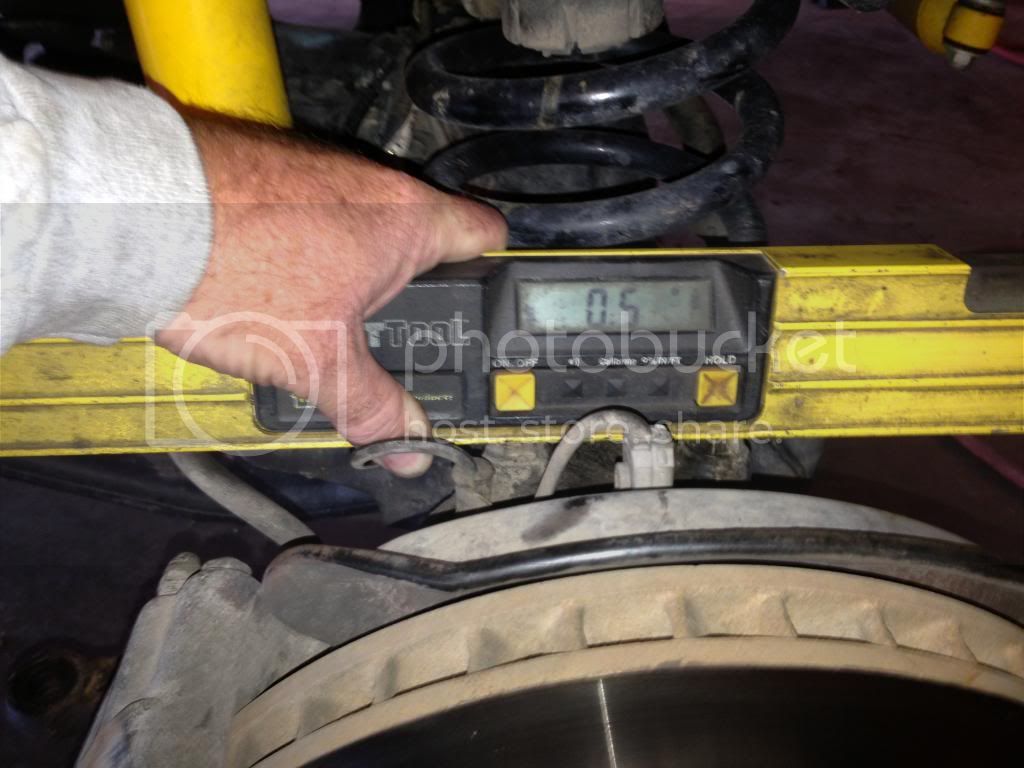 So with all my measurements written down it time to start cutting! Clean the area around the factory weld very good with a wire wheel. I like to make my cut just to the inside of the factory weld. You only need to cut in about 1/8" all the way around. I was able to use a cut off wheel on my grinder for 90%. 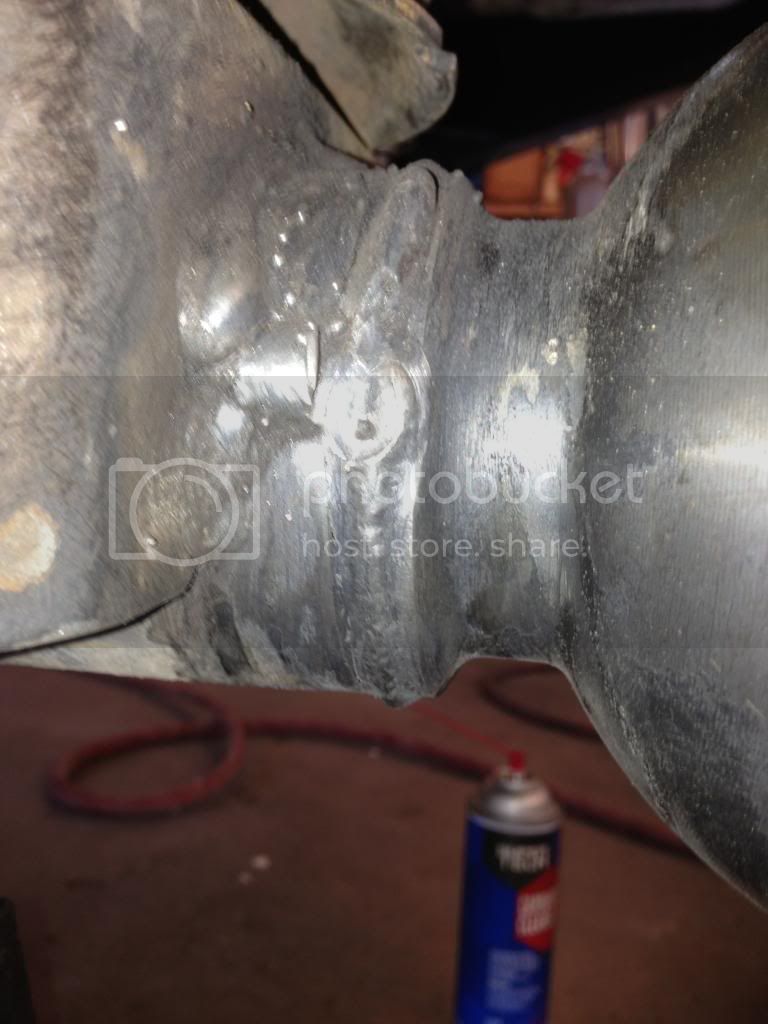 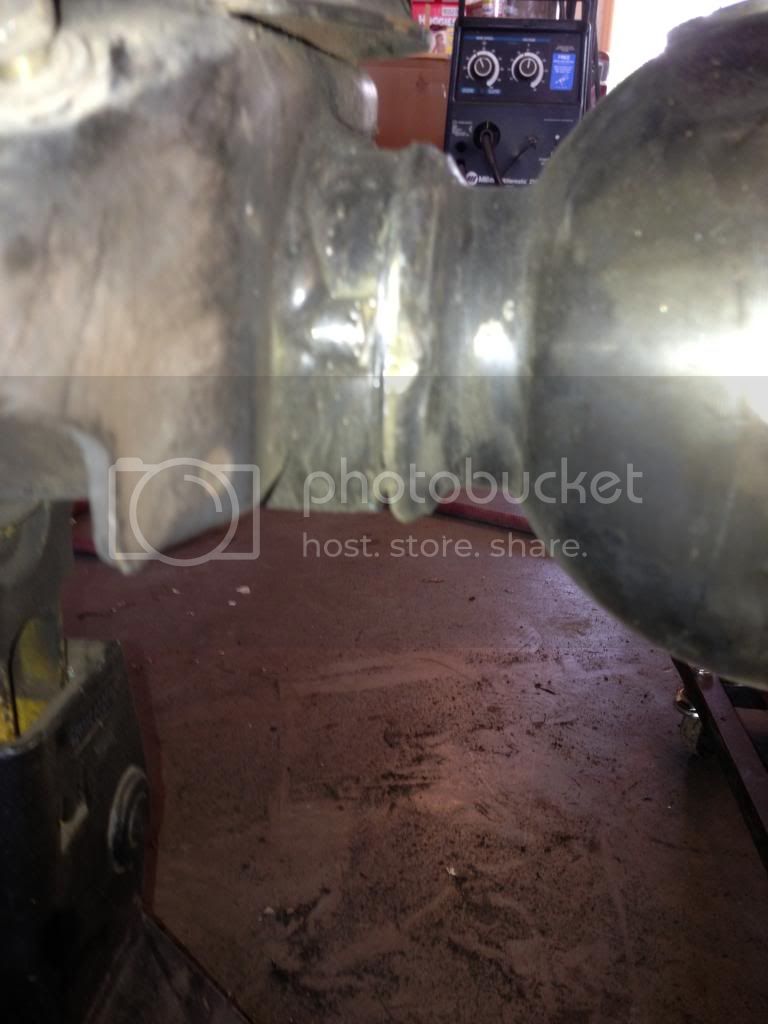 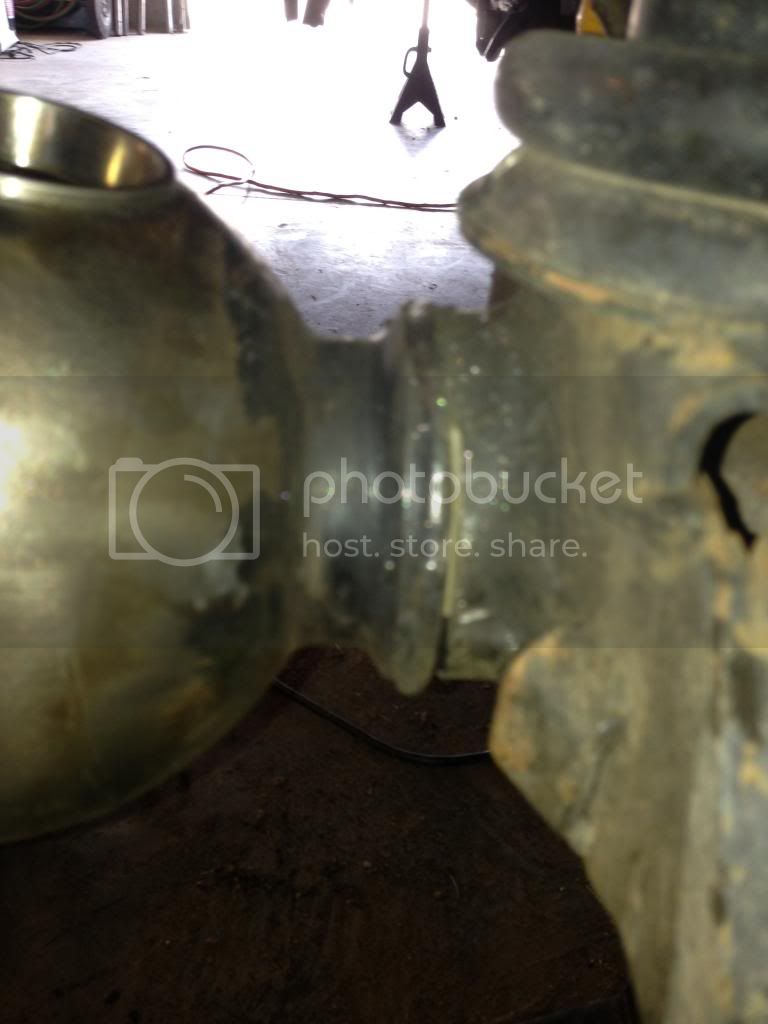 The top of the knuckle is a little more difficult to get to with the coil bucket there. I had to use my SawZall to get in there. This is where a good blade makes quick work! 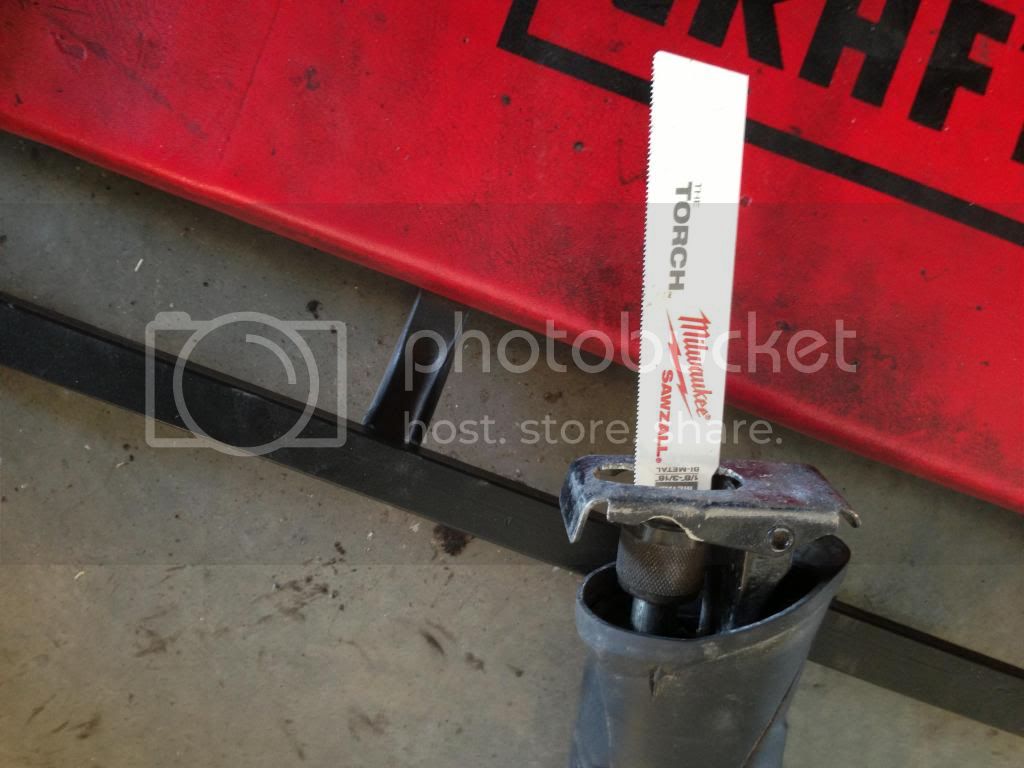 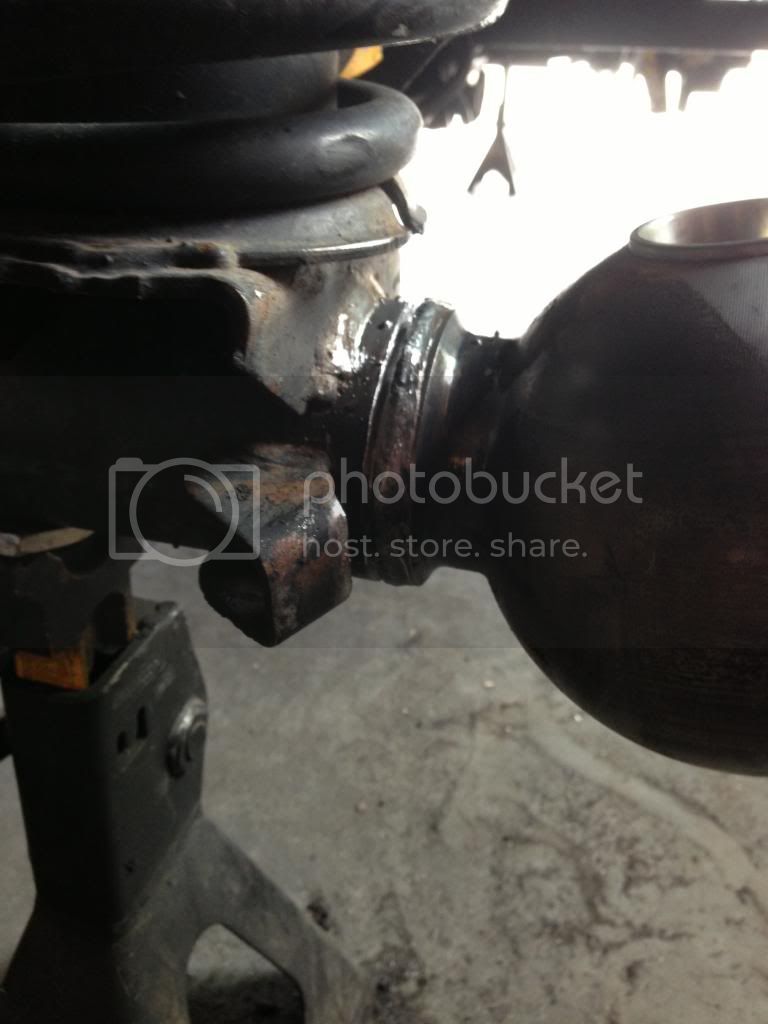 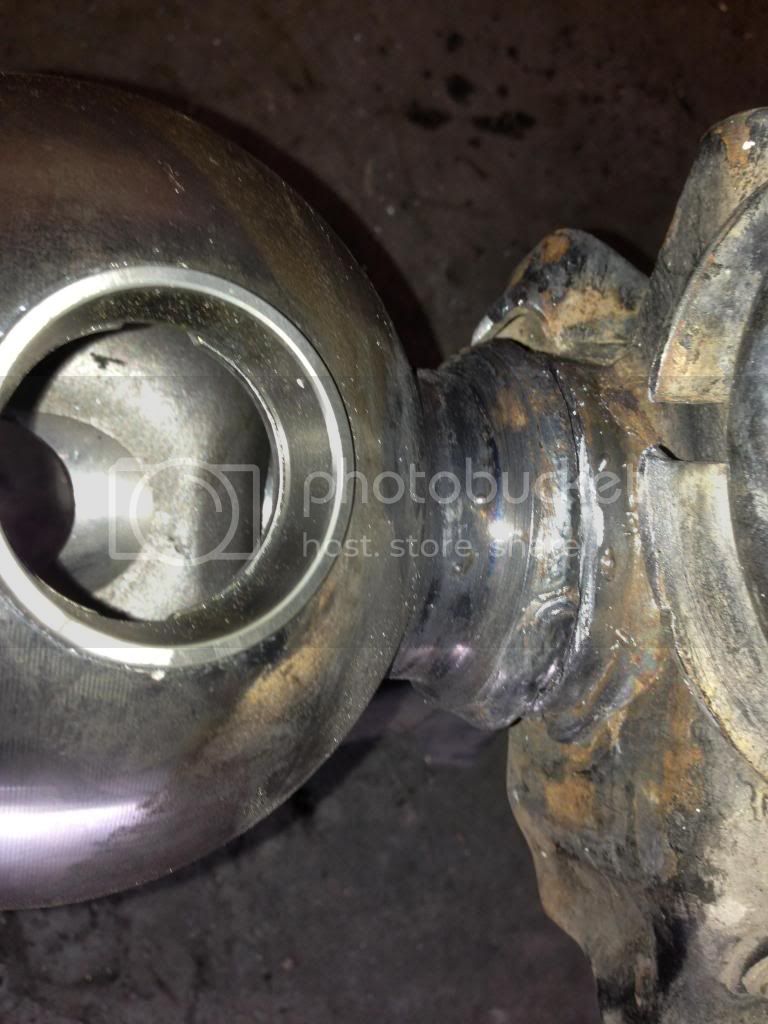 I like to take a chisel and make a horizontal mark across the cut so when I rotate the knuckle I can see how much I am moving it and I can compare to the other side. 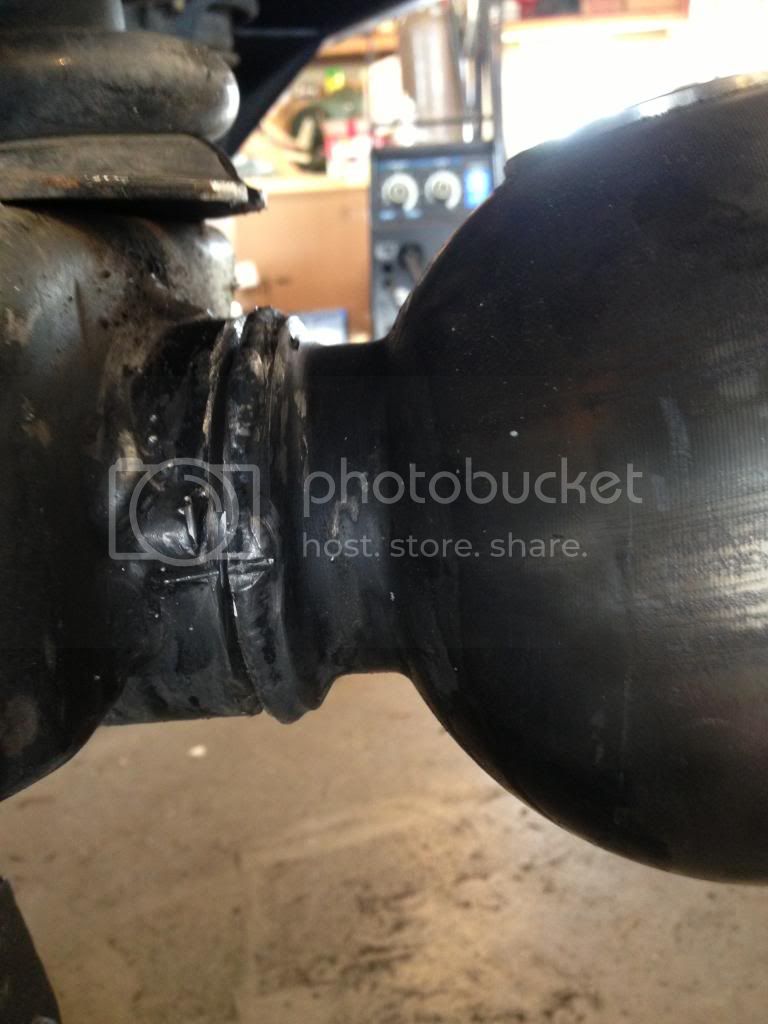 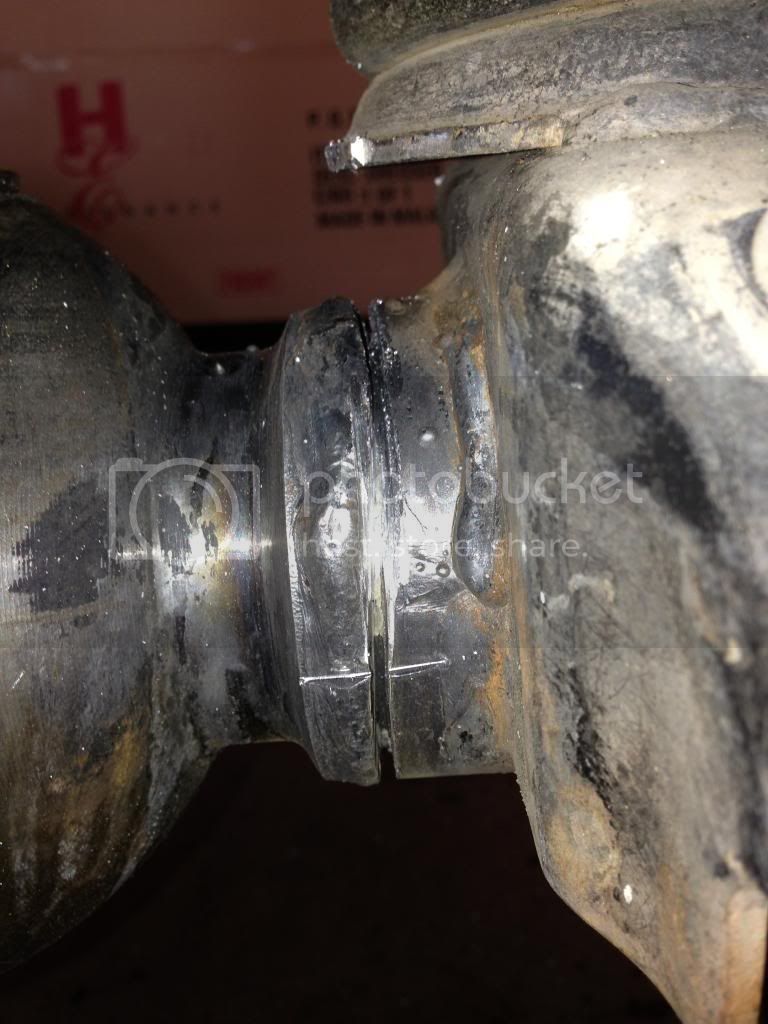 Next take a BFH and beat the knuckle back. I like to leave the trunion bearing races in so you don't damage the knuckle itself. I was replacing all the bearings so I was not worried about damaging the bearing race. I know the FSM says castor should be 2*-4* but with the bigger tires I was aiming for 5*. Plus 5* was as much as I could get without the steering hitting the control arms. I put the steering knuckle back on and put the tie-rod back in to check clearance and have something flat to measure off of. You can see how little you move the actual ball to achieve the proper castor. 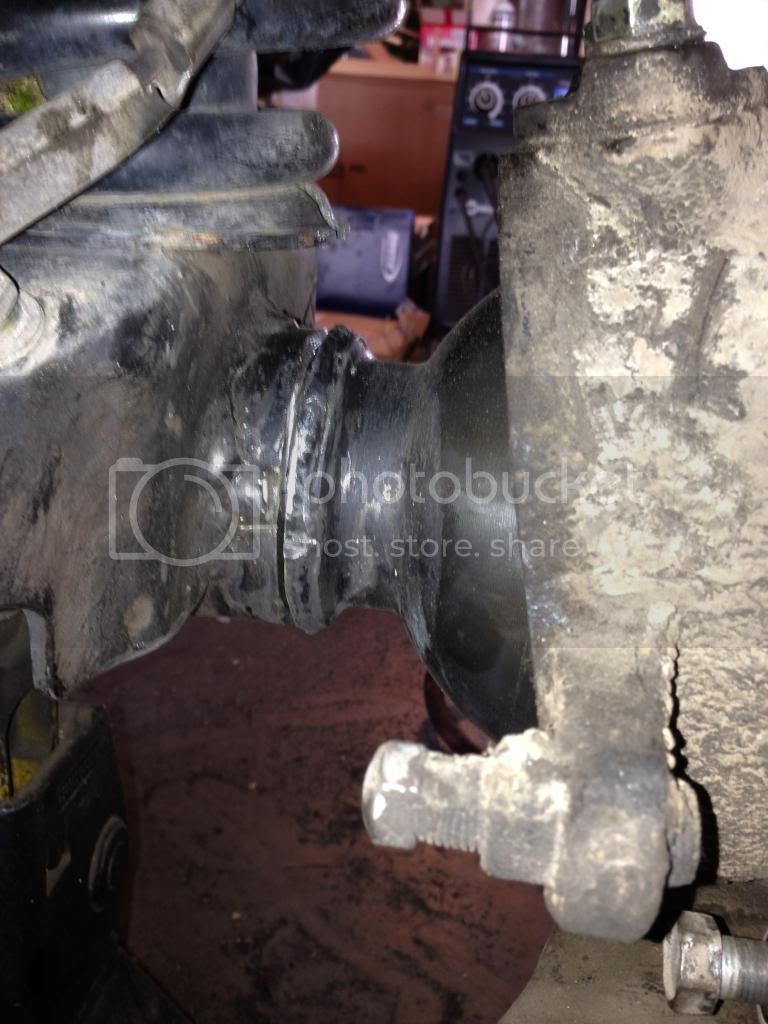 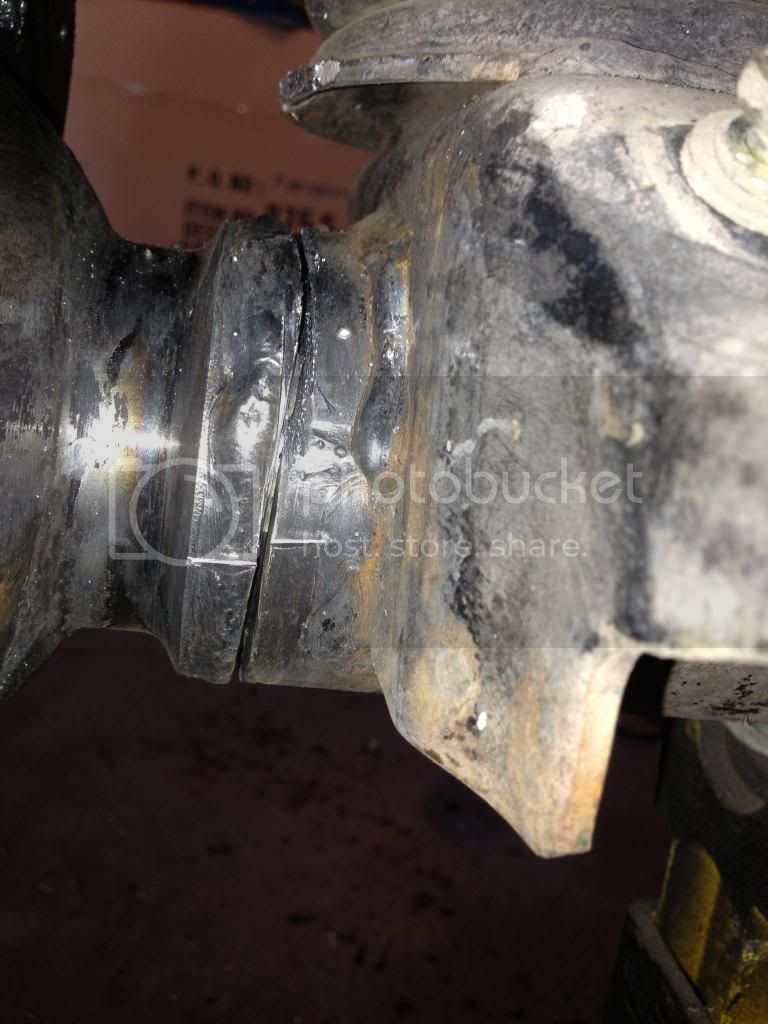 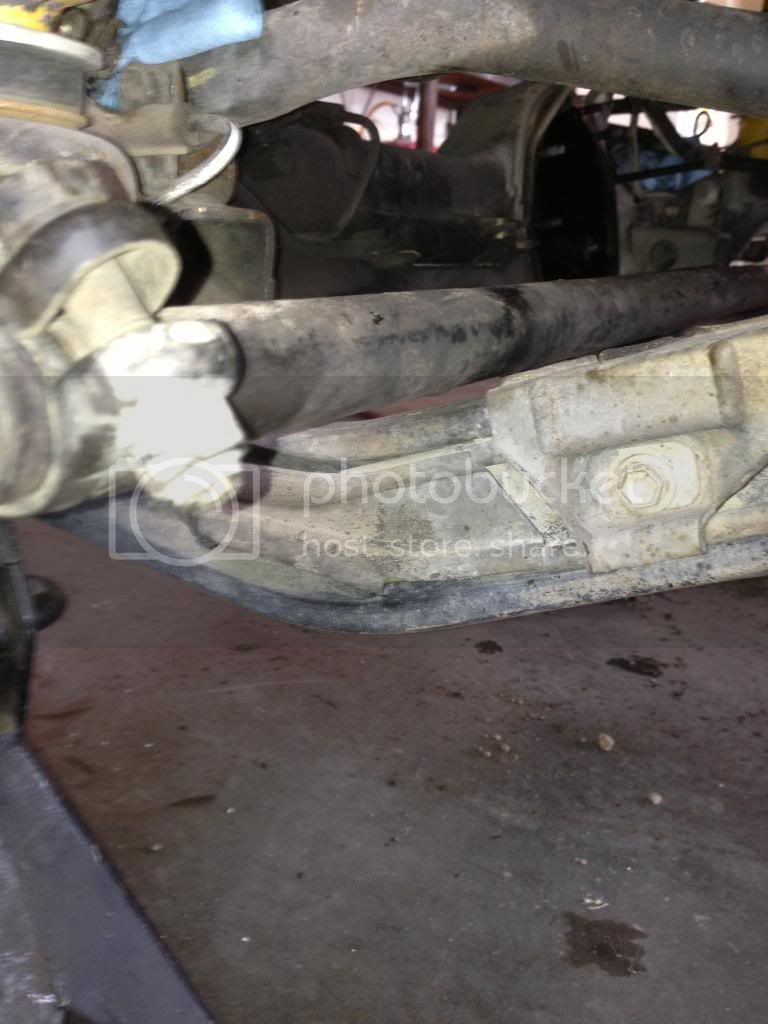 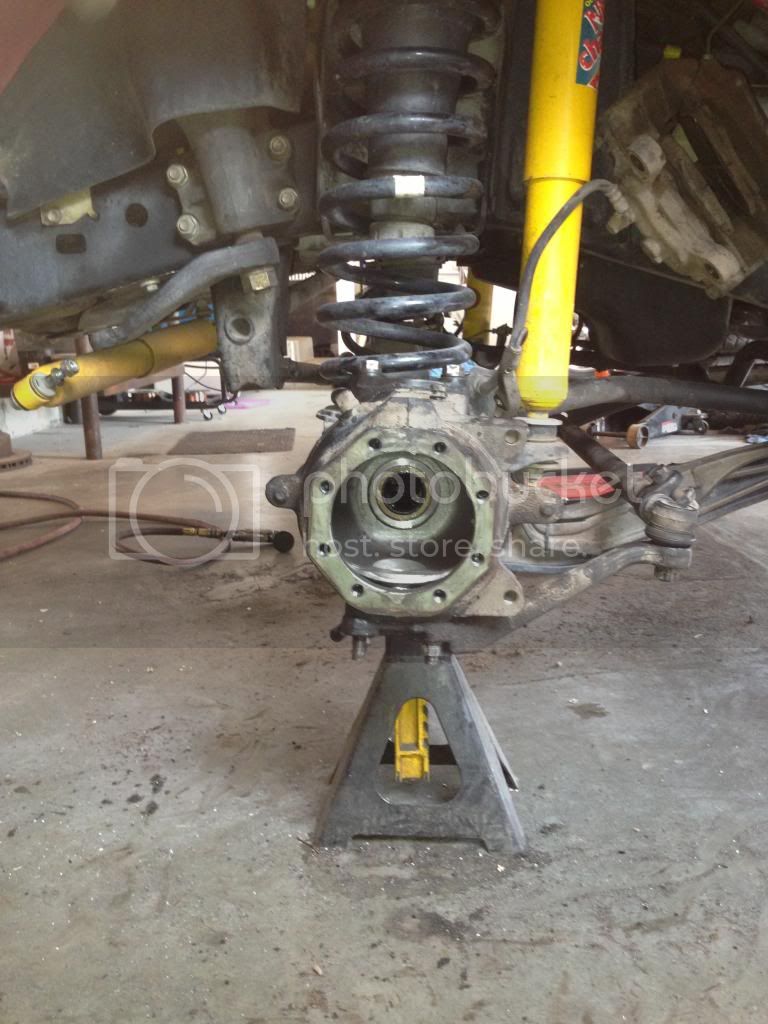 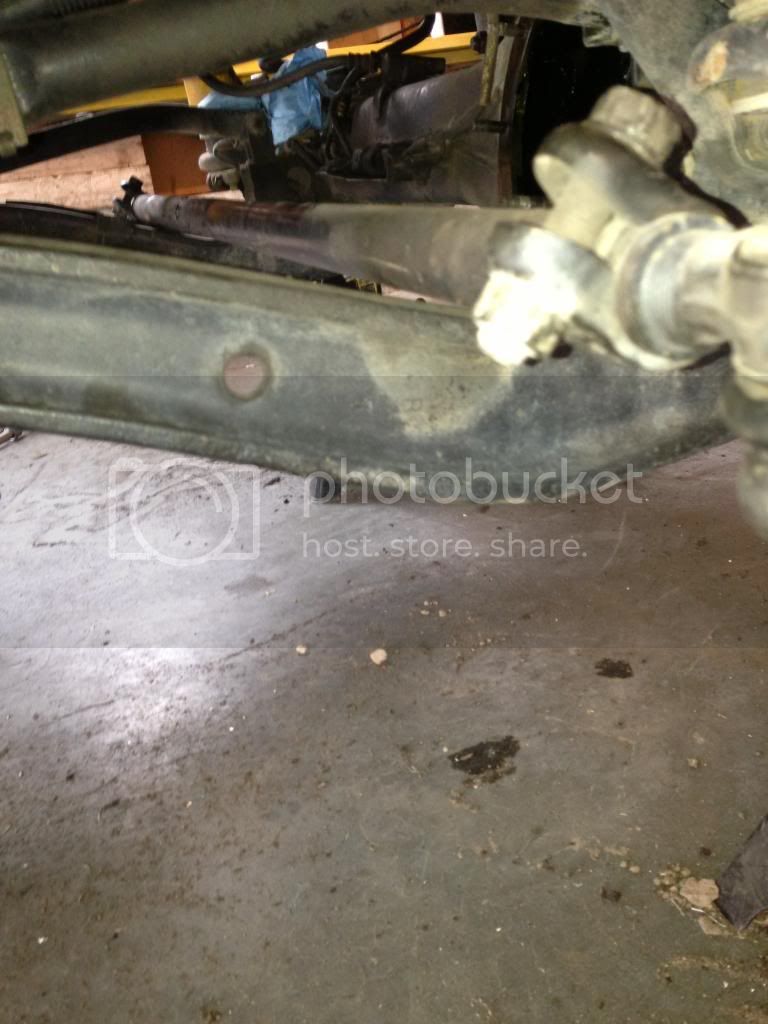 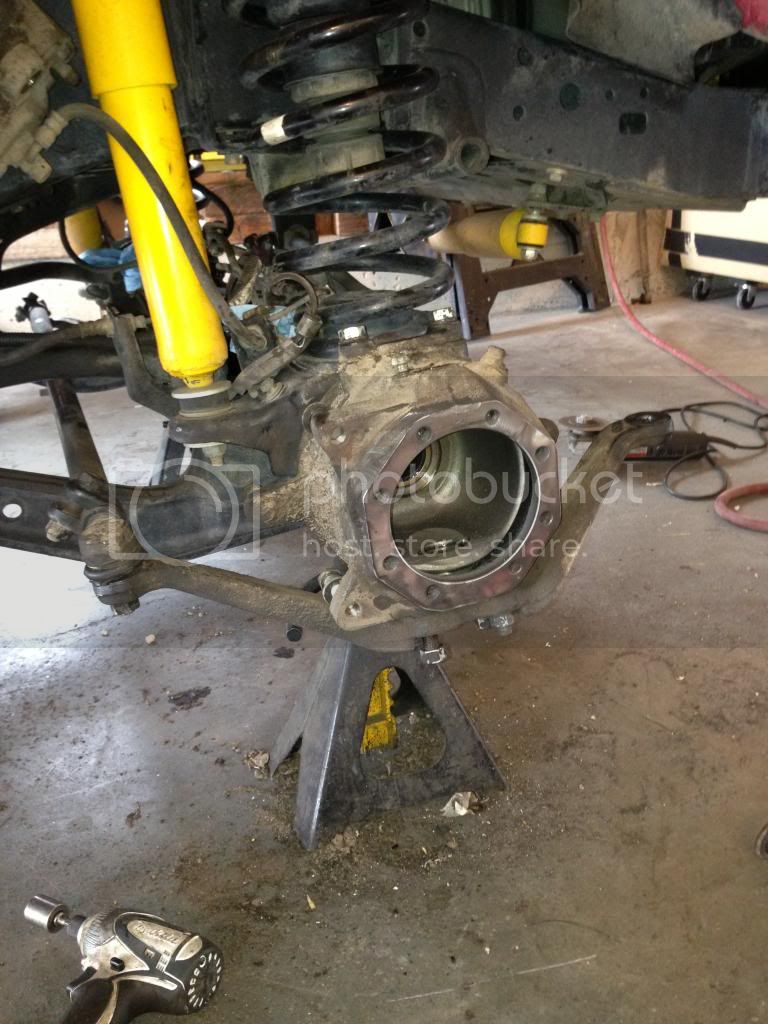 So it is time to fire up the welder and dial in your heat and speed. Then burn the weld into where you made the cut. I like to weld the ball in quarters doing two welds on each side at a time with a beer in between to let it cool down. 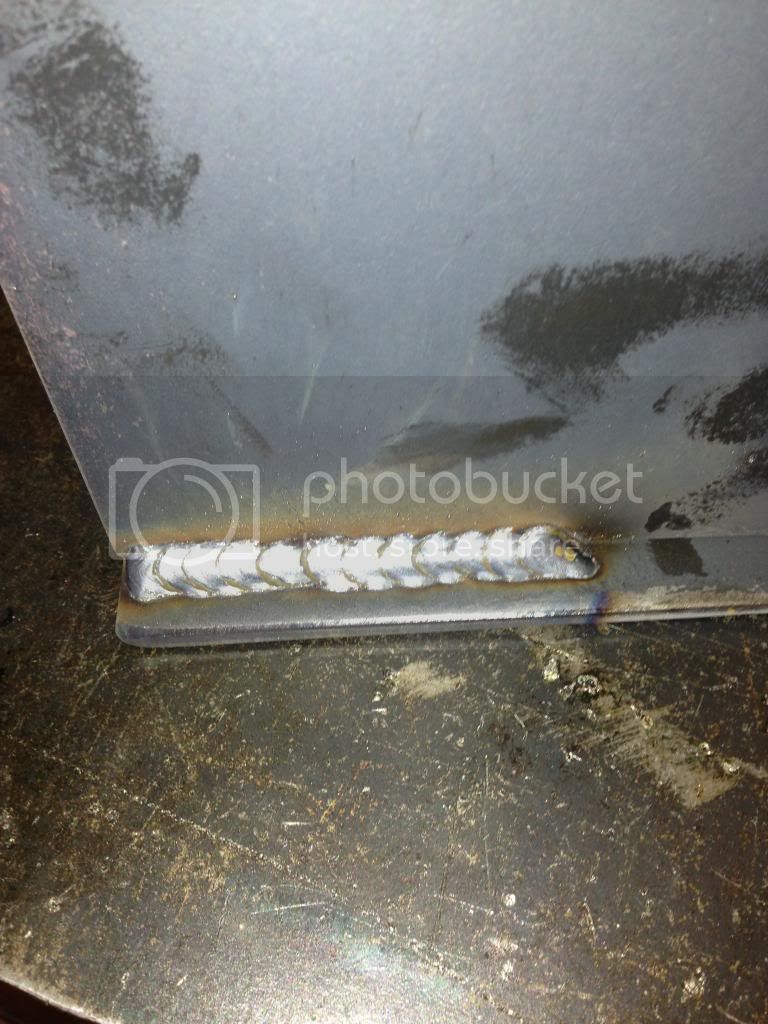 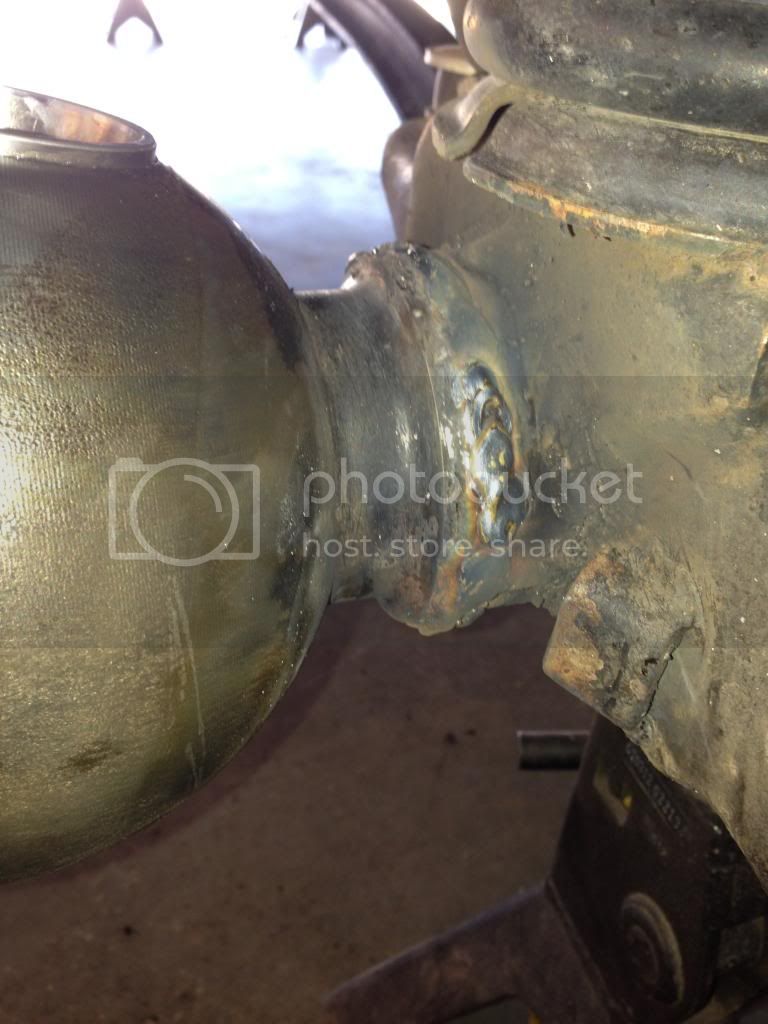 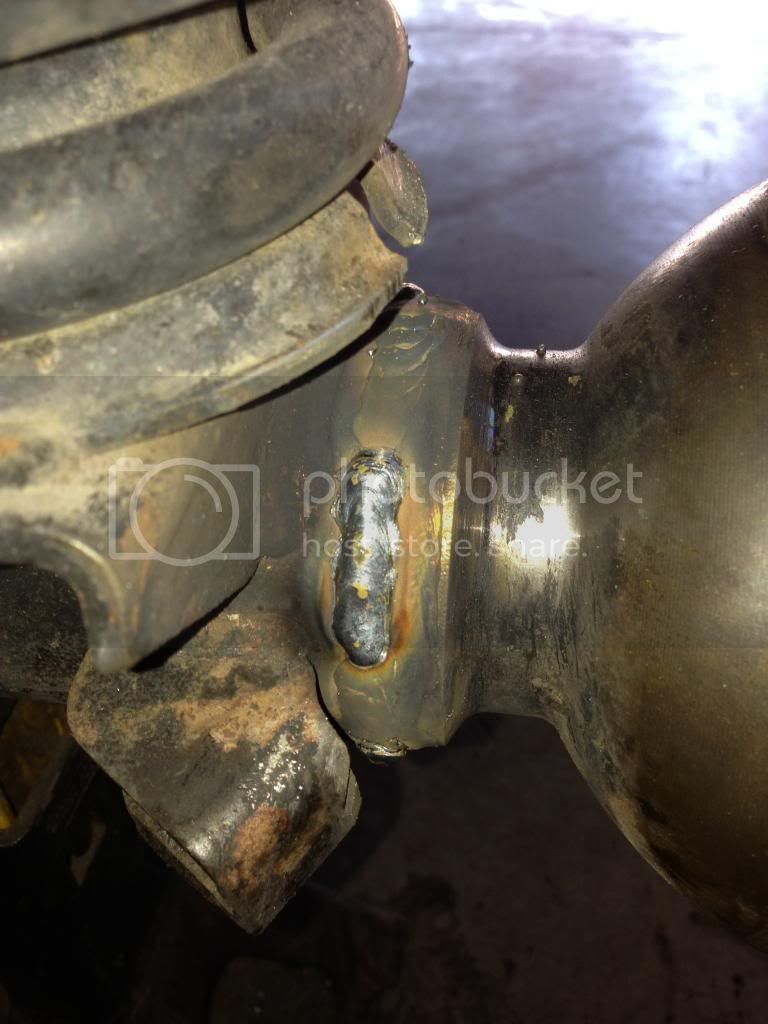 That is pretty much all there is too it. I took me an additional 3 hours once I made the first cut on the first knuckle. A lot of that time was spent taping it back and forth and comparing it to the other side and making sure it was perfectly vertical and matched both sides.
So final thoughts? Well worth it, it drives like my Yukon now and does not wander at all. The gears are great and the breaks kick *** now. Nothing was in bad shape, I just like to know that it will be good for the next 100k miles. It was a **** load of work to get done in a weekend and I am tired and sore, but that will all go away...
Last edited: Oct 3, 2013

Wow that is impressive, nice job! I haven’t seen this done on an 80 yet. From your write up it looks a lot easier then I expected.

Great job, made it look too easy! Now I just need somebody local to me to start doing it

Too bad the geometry is not such that swapping in adjustable control arms could fix the caster issue.

In any event it sounds like everything worked out to plan. Congrats

Newps said:
Wow that is impressive, nice job! I haven’t seen this done on an 80 yet. From your write up it looks a lot easier then I expected.
Click to expand...

It is fairly simple as long as you know what to measure.


jcardona1 said:
Great job, made it look too easy! Now I just need somebody local to me to start doing it
Click to expand...

Idaho is pretty local to Sacramento, lol. I actually bought my Cruiser from Sacramento.

Not really brave, after you have done a few dozen they are not scary.

Too bad the geometry is not such that swapping in adjustable control arms could fix the caster issue.

In any event it sounds like everything worked out to plan. Congrats

Yeah, its a lot easier to adjust on a Jeep, but I'll still keep my 80! Someday I may do a 3 link on her but it works very good for what I do these days.

I have done a few 60's but never an 80 until now. I don't like castor plate or bushings for various different reasons, mostly just because I am like that. I had to take the axle apart to do the gears and brakes and bearings and everything else so this was just as easy for me to do and I didn't need to spend any more money on plates or bushings. I like the stock bushings and the way they ride and feel.
I'm not saying that castor plates are bad or wrong or anything else, I just choose to turn the knuckles since I have done this many, many times on other vehicles and it was easy for me.

That's a lot of work. You could of just slapped on a set of castor plates and got the same results. And it
's reversible too. Castor plates work. A million people will tell you so.

Wrench said:
That's a lot of work. You could of just slapped on a set of castor plates and got the same results. And it
's reversible too. Castor plates work. A million people will tell you so.
Click to expand...

I'm not going to argue if castor plates work or not, go argue in one of 10,000 other threads about them.
A lot of work? It took me an additional 3 hours to do this and that was having a few beers in between. How long did it take you to put your plates on? Probably not 3 hours, but I bet two, so what is an extra hour? If you had read the whole thread you will see that I also installed gears and rebuilt both axles so I was already there.
To me castor plates are like an aluminum drive shaft puck extension, sure it works, but I would rather just pull the shaft and have it lengthened...
This is reversible? I could take it all a part again and put it back. The thing is I don't plan on changing anything on the Cruiser in the future, I like how it works and drives now.

Nice job! How does it compare to the caster bushings? Any noticeable difference?

What's there to argue about? Castor plates simply work. And work well.
It probably took me about an hour to install. Real easy. And the results are great!

Hats off to you for doing this. I am constantly in awe of some of the skills of people on this site. I think if I tried it I would never get everything lined up right and my axle seals would be forever short lived, but I am a bit of a nancy when it comes to getting that far into mechanics. I am pretty comfortable with wrenches, but this? Me thinks not and the roads are safer with me not trying it.

The big advantage of this is that you de-couple the pinion angle from the caster so that you can get caster back without changing pinion angle.

sleeoffroad said:
The big advantage of this is that you de-couple the pinion angle from the caster so that you can get caster back without changing pinion angle.
Click to expand...

Good point. That is a huge advantage.

Another advantage is price.... Free! Plus you don't have to worry about drivability, vibrations, driveshafts, etc. which could turn into additional costs.

With that said, no way I'd attempt it!
Pat

It's not free. You need a grinder, sawzall and a welder. Which cost way more that castor plates will ever cost.

^Yup! All of which he already had I'm sure= Free! Wait, I guess he used up a cutting disc and paid for the electricity during welding.

You win. Plates are BEST.

^There's no such thing as a free lunch.

Wrench said:
^There's no such thing as a free lunch.
Click to expand...

Dude seriously, go threadcrap somewhere else. You're adding nothing of value to this thread other than your bitching and whining.
You must log in or register to reply here.

Turn signal what to test next?