Is my THROW OUT BEARING THE WRONG WAY ROUND? (1 Viewer)

Is there a right side and wrong side to the throw out and is mine the right way round?

or will it wear in and stop making noise 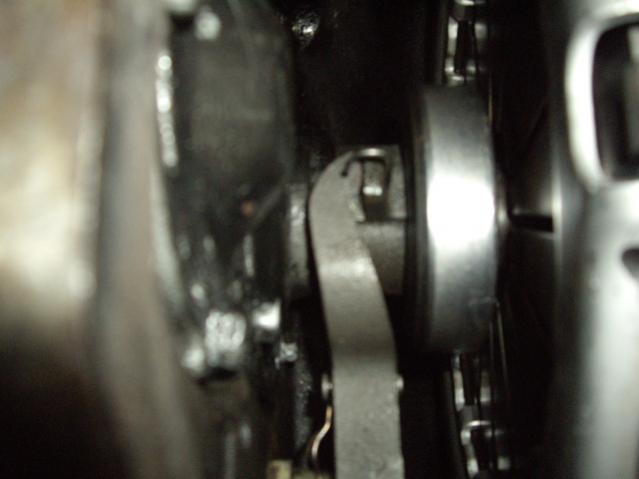 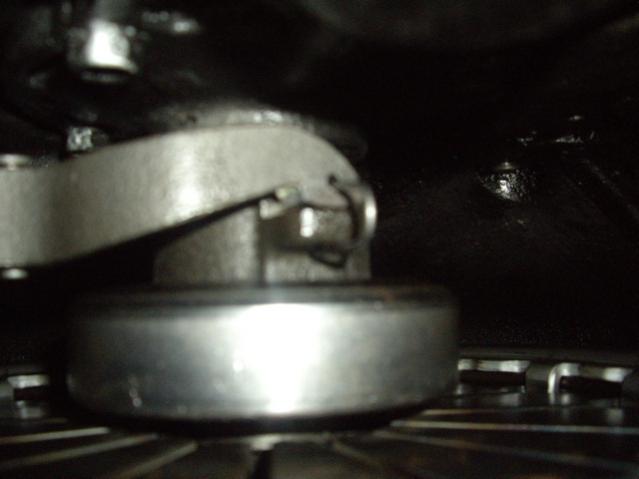 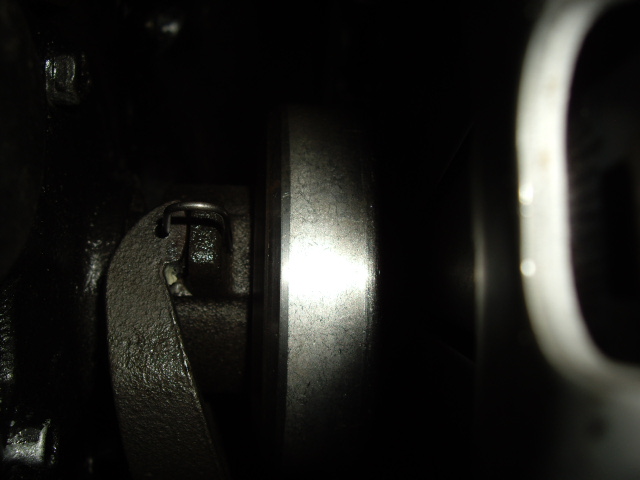 I am in the middle of a clutch job on my 78 and there certainly appears to be a 'right' way.

I made sure that I put mine on hub in the same orientation the old one came off.

Is is the fork attachment side (post 9, picture 10) . Hope this helps.

mine looks black on the smaller side toward the hub


I am wondering if one side is a special surface as it does not seem right to go metal to metal on a spinning assembly but I dont know?


I am also wondering if it could be an adjustment issue?

Sure you have the correct combination of parts here Man?

Looks like theres insufficient clearance between the fork and front brg. retainer (red line in pic).......... 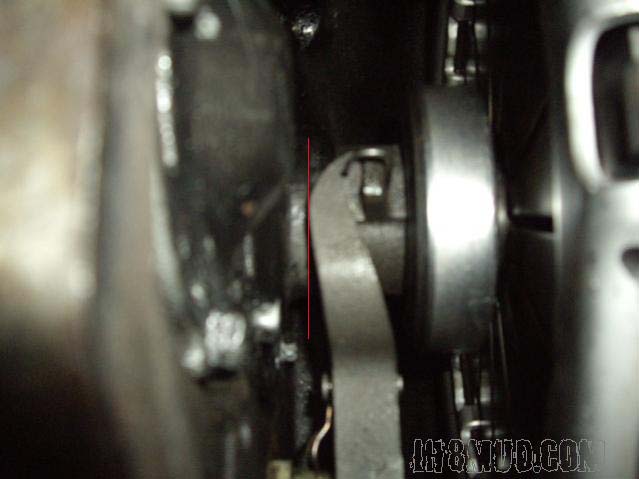 It looks like you have it in right ,However you may have the wrong clutch,maybe you got a short throw presure plate and it rubs when bottomed out.

Another possiblility is that my old throwout bearing was way different than the one I purchased to replace my 1976 bearing..... The new one is thicker and has a rounded edge on the face vs. the old was flat. I was doing a conversion so I dont know but I think if I wasnt the new bearing would have been to thick?????

There definitely is a "right way around". And that looks the "wrong way around" to me.

(But hard to tell for sure.)

The bit that hit the fingers should have a circular "raised ring" around its surface. (Sorry - I'm not describing this well - A crossectional view would show that the surface is convex.)

(That rounded-ring-surface looks to me like it faces the rear in your photos rather than facing the clutch fingers.)

But to put it on the wrong way around you would need to have had your mind in neutral (or drunk way too much beer)! Because when the bearing contacts/hits the fingers the contacting surface must spin with them.

And if it is the wrong way around the non-rotating part of the bearing will hit the fingers (causing wear and noise).
Last edited: Mar 15, 2009

I could not feel any raised portion on either side

I think this may be a slightly different design but I am afraid it is the wrong way round but I dont want to pully the tranny and flip and find out that is wrong! The manual I have is not a lot of help it has a line drawing that does not really show detail and there is no warning to put it right or wrong way

so what do you think --that black side toward the pressure plate?


I am thinking what a PITA this all was doing by myself ---the seat frame, gas tanks, tunnel tranny arrrrgghhh, they all fought me going in 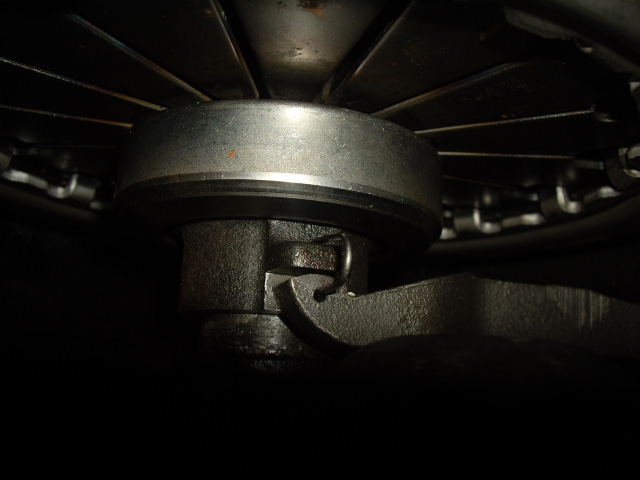 cant remember which is which now---short or long for the four speed? I think I tried the old one for S&G's and it didnt work and then I put the one I ordered in 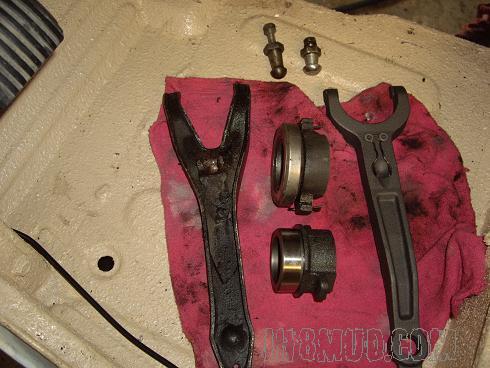 bsmith123 said:
I changed from a 3 speed to a 4 speed and replaced it with new parts all the way through

The 3 speed ball was a lot shorter

Looks like a miss type. I am pretty sure the 4 speed pivot ball is the short one is it not?

uuuuuhhhhhh? I guess I should of labeled them in the pic

But to put it on the wrong way around you would need to have had your mind in neutral (or drunk way too much beer)! Because when the bearing contacts/hits the fingers the contacting surface must spin with them.

And if it is the wrong way around the non-rotating part of the bearing will hit the fingers (causing wear and noise).


grant5127 said:
Sure you have the correct combination of parts here Man?

Looks like theres insufficient clearance between the fork and front brg. retainer (red line in pic)..........


Anyone got the same bearing in their's? looks like some think it is okay and some not

Need to get your s*** together inside the bell-housing or you'll end up with a bearing like in the pic below.........

Impressions worn into the surface due to miss-configuration (drive-ability problems)...... = short-lived, do it over syndrome........ 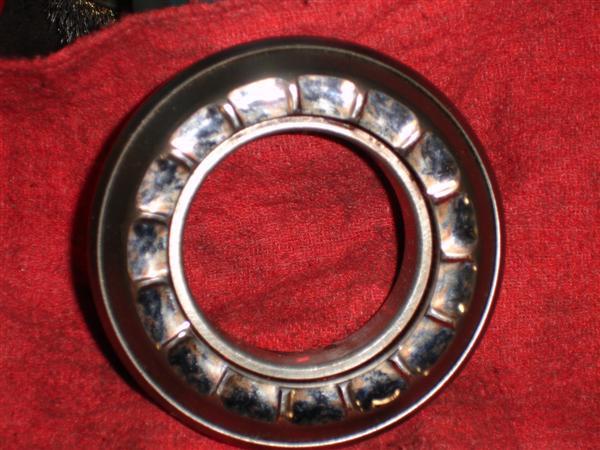 After seeing this pic it is on backwards

grant5127 said:
Need to get your **** together inside the bell-housing or you'll end up with a bearing like in the pic below.........
Impressions worn into the surface due to miss-configuration (drive-ability problems)...... = short-lived, do it over syndrome........

Thanks
Exactly! Just want to be sure what the prob is and for sure dont want to see a $400 job down the drain despite the pain factor. You mentioned the pivot? I have the short one and the hub appears the same as one in the FAQs--that is new too. Are you seeing anything else?


What was misconfigured to cause the TOB damage in your pic---was it in backwards? Pivot?

One more thing---The throw out bearing is supposed to ride free of the fingers? Not up against them and spinning constantly--is that right


so the black part ---is that the pressure ring?

yeah it looks ugly---you sure on the wrong way round? I am inclined to agree but want to be sure and get a few opinions saying the same and make sure I havent overlooked anything ---been 30 years since I seen a clutch out and then I was just helping

Ok I hope these help because I walked 4 miles bare foot in 4 feet of snow to get them!! 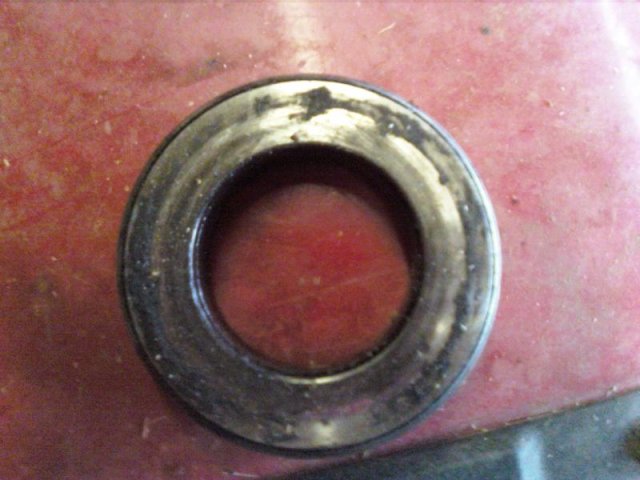 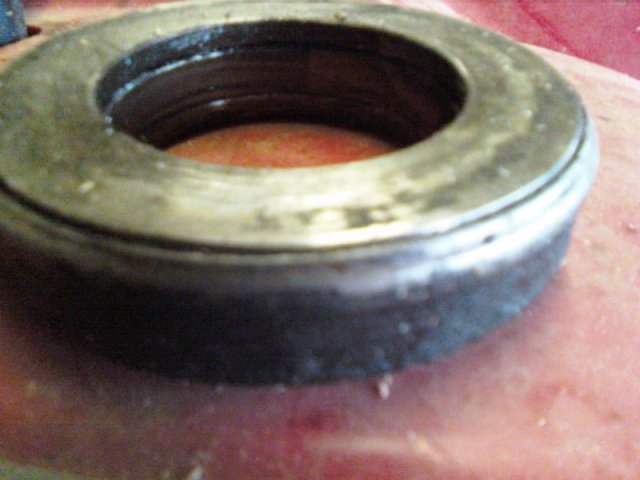 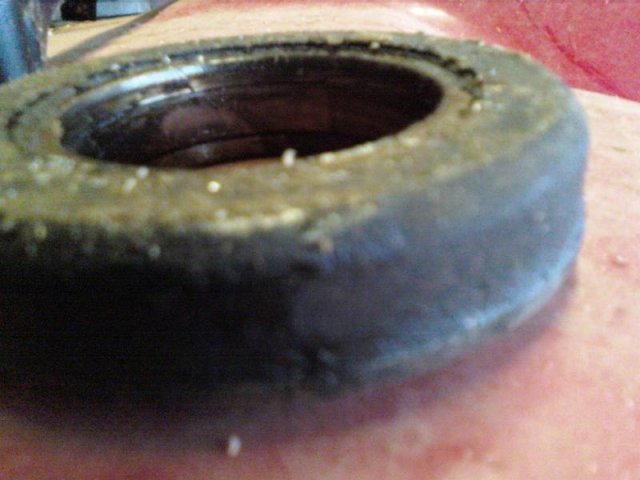 It is a nice smooth roll off of a factory bearing to the fork side. It is a wierd bump on the side that goes to the disc.. well atleast on a 76 factory one. The short one is for the 4 speed. It sounds like you have plenty of them but if you need another I still owe you a favor. My pics suck but maybe they will help and if not I can get better ones tomorrow. By the way this is the flat bearing that I mentioned in my first post the new one I bought has a weird rounded side like a bump that contacts the fingers and was thicker if I remember right which I thought might help for my conversions POSSIBLE engagement issues. 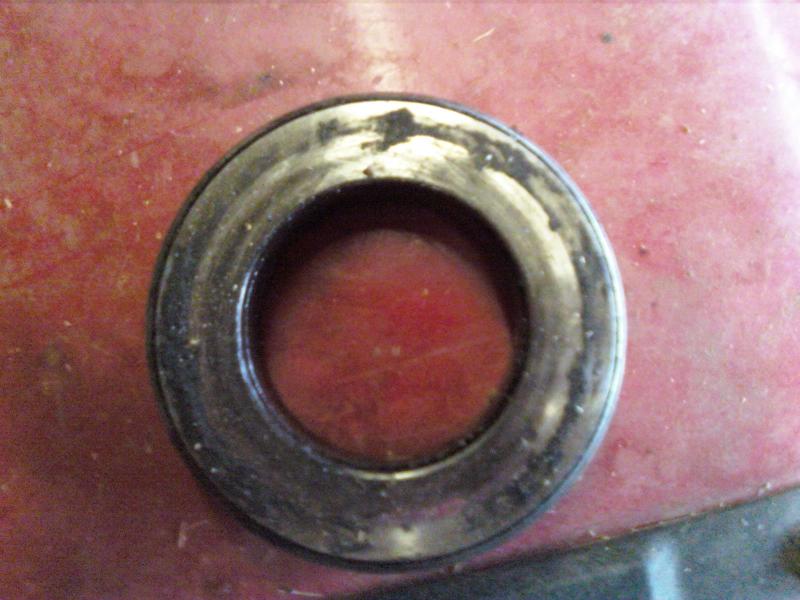 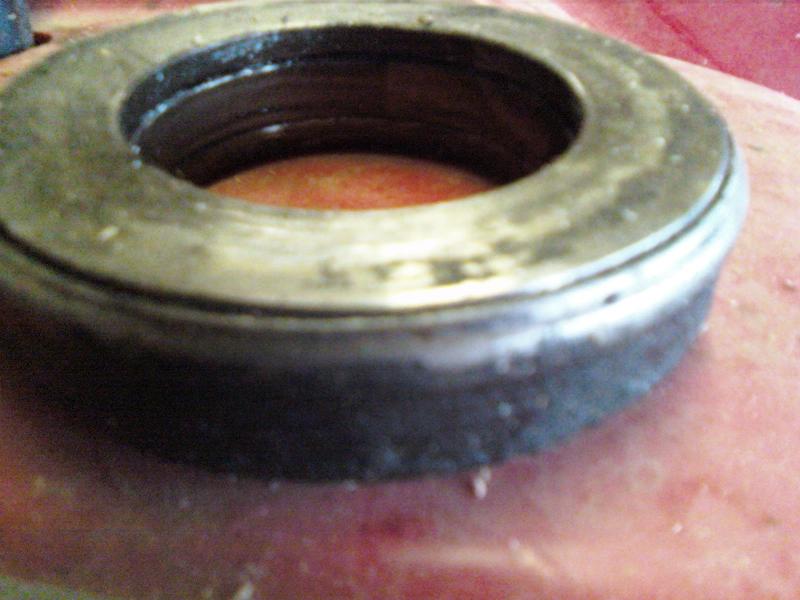 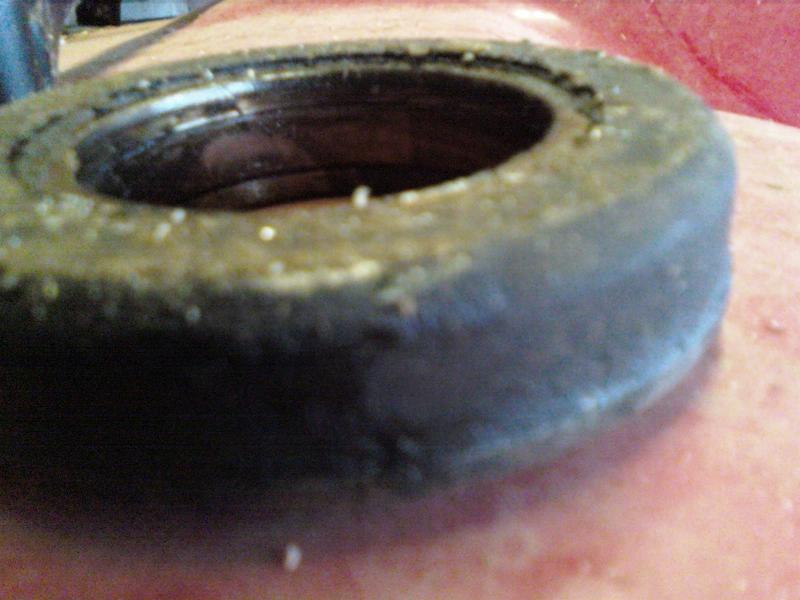 here is the weird one i mentioned 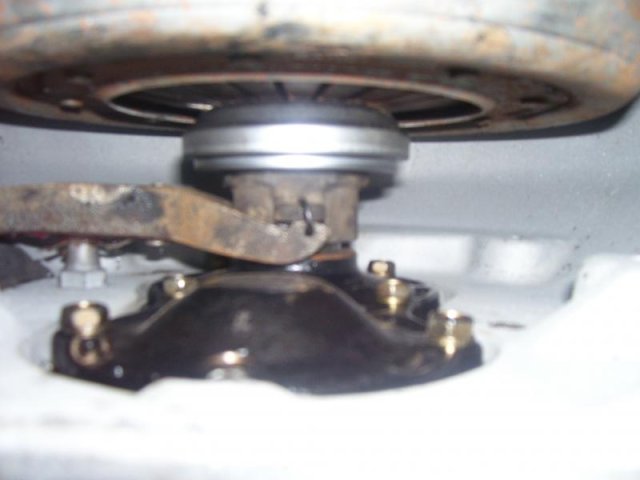 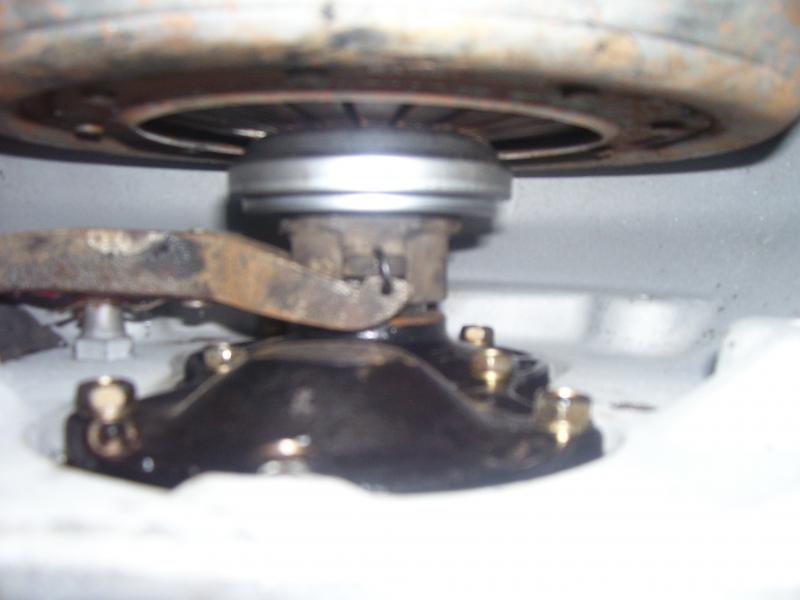 Yes, the throw out bearing should not be touching the clutch fingers when your foot is off of the clutch, otherwise the TO bearing will spin non-stop and wear out prematurely. Make sure you adjust your pedal height and clearance under the dash according to the FSM and then adjust the freeplay of the TO bearing using the rod & nut on the slave cylinder. Also make sure you have a good strong return spring on the lever so it cant let the bearing drag.

Dumb question, but when you reach up in there can you freely spin the TO bearing? It shouldnt spin freely like a bicycle wheel because of the grease in it, but it should be real easy to turn with just a finger. Sometimes the TO bearing will get damaged when its being pressed or pounded onto the carrier.
You must log in or register to reply here.

How to tell bad bearing in steering wheel