The Wix Model 24801 Air Filter Monitor is designed to indicate air flow restriction through the air filter on fuel-injected gasoline or diesel engines. 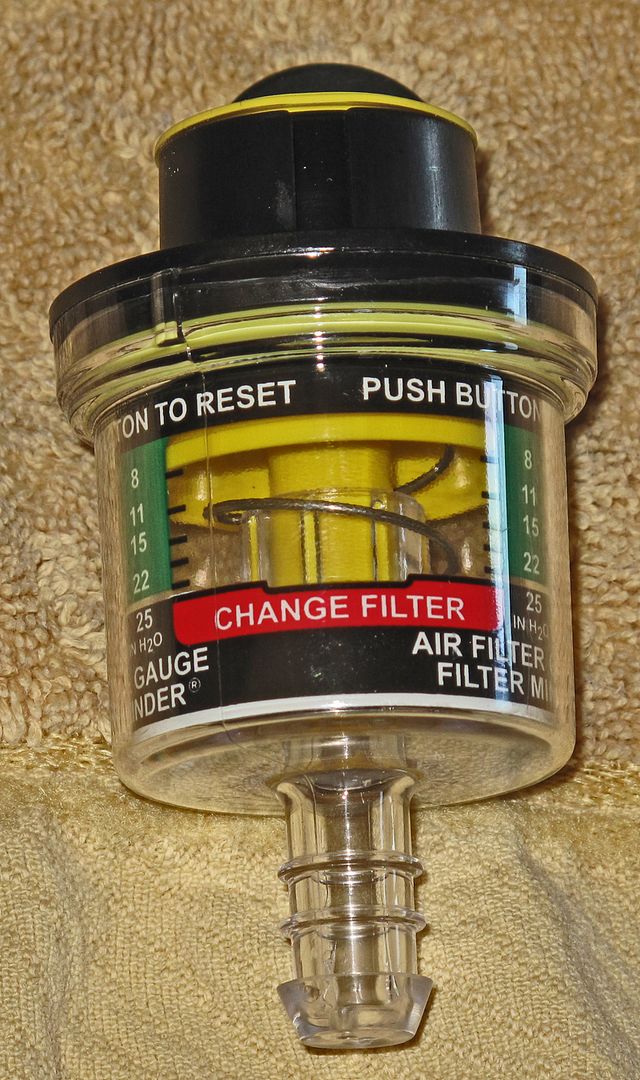 The monitor is just a vacuum gauge that "locks" the maximum vacuum value until reset by pushing the yellow button on the top of the monitor. As dirt accumulates on the air filter, vacuum increases. When the gauge indicates in the red - time to replace the filter.

The monitor can be mounted either horizontally or vertically on the clean side of the air filters. 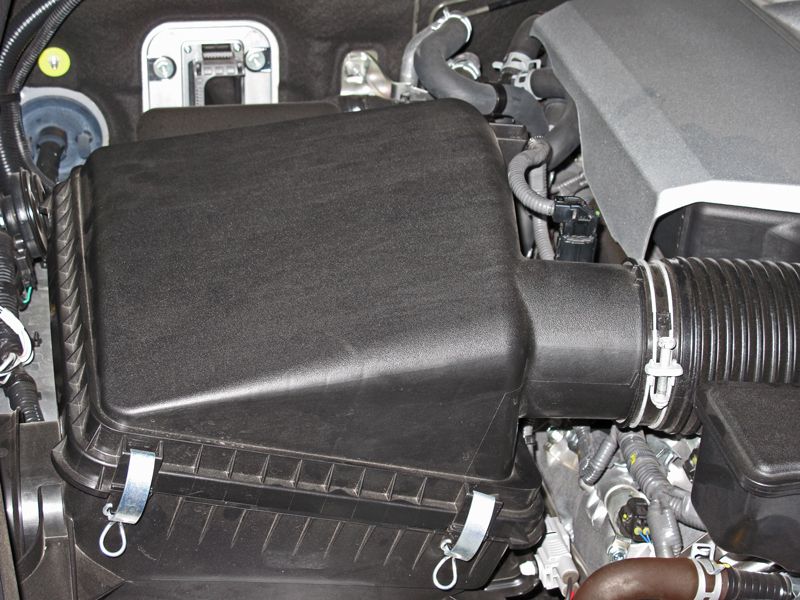 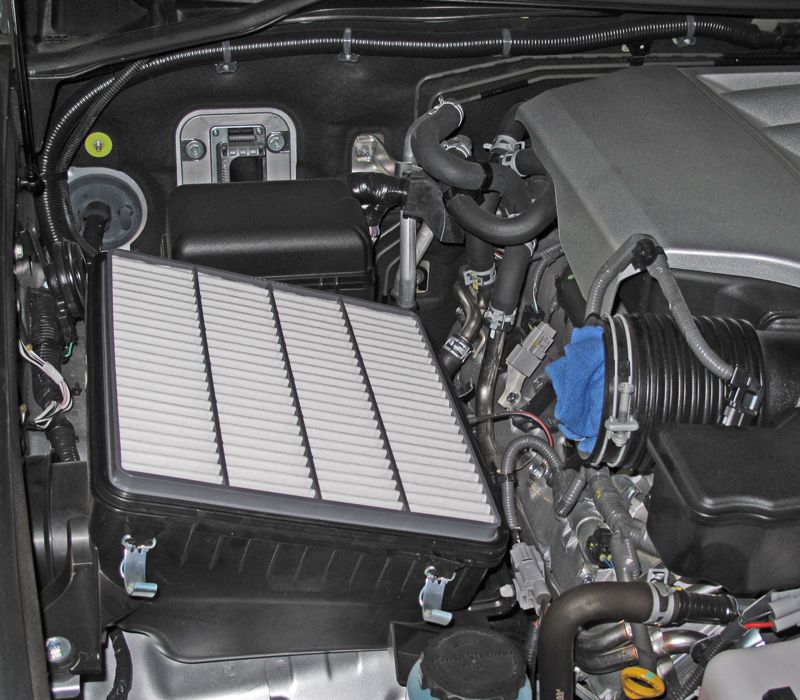 Here's what the upper filter housing looks like after removal: 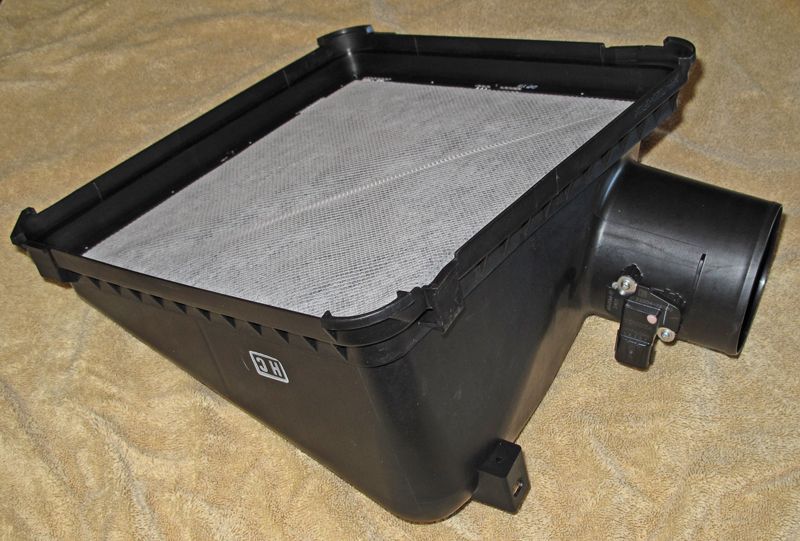 Note the permanent post-filter that is part of the upper filter housing and is positioned after the replaceable air filter element.

Next the MAF sensor should be removed by removing two small Philips head screws. 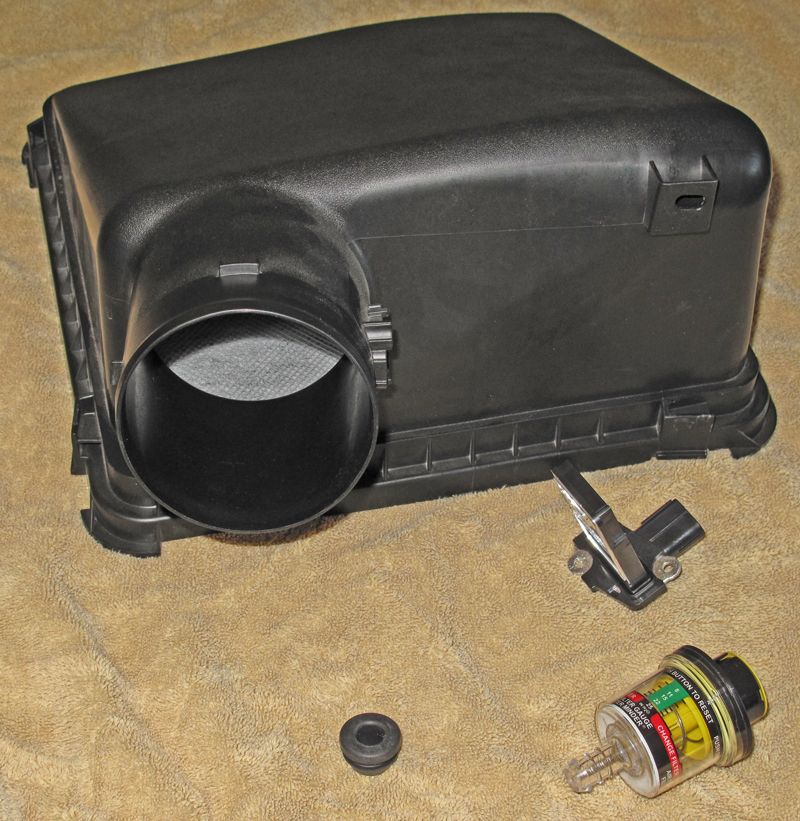 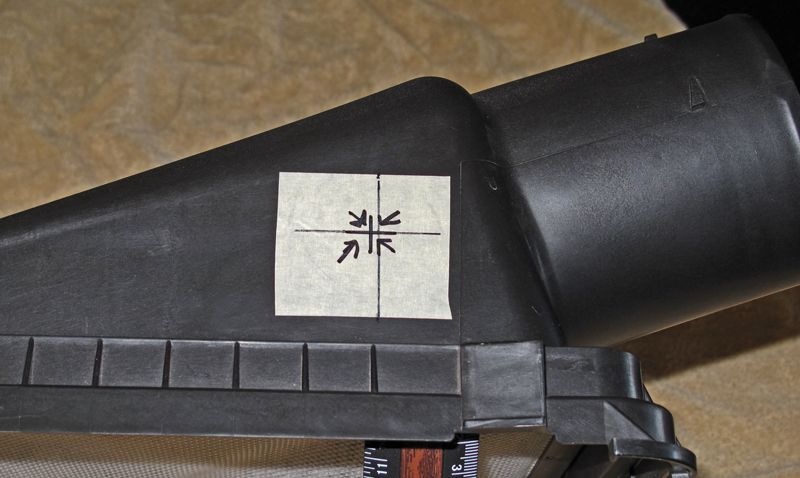 I used a spade bit and cut the hole. It is very important that you remove all little plastic bits that may fall into the filter housing. That is why I removed the MAF so that I could reach in and grab the large bits and also "flush" the interior of the filter housing with an air gun to make sure there were no residual plastic bits.

Here's a pic of the drilled hole, the 11/16" spade bit, the monitor and its grommet. Also included in the pic is a tube of K&N Air Filter Grease which is used on the grommet to allow it to be inserted into the hole in the housing easily and provide a good seal. The grease is also used on the shaft of the monitor that fits into the grommet for the same reasons. 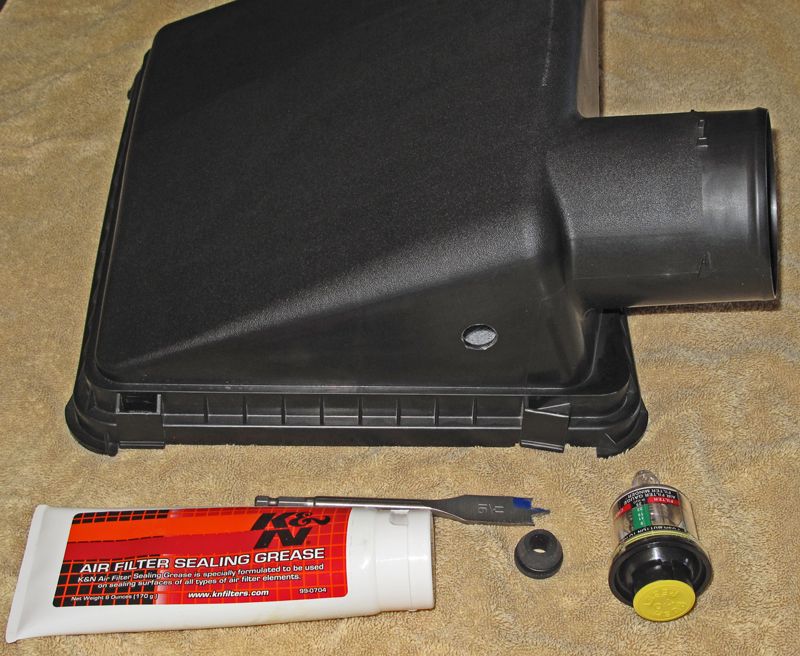 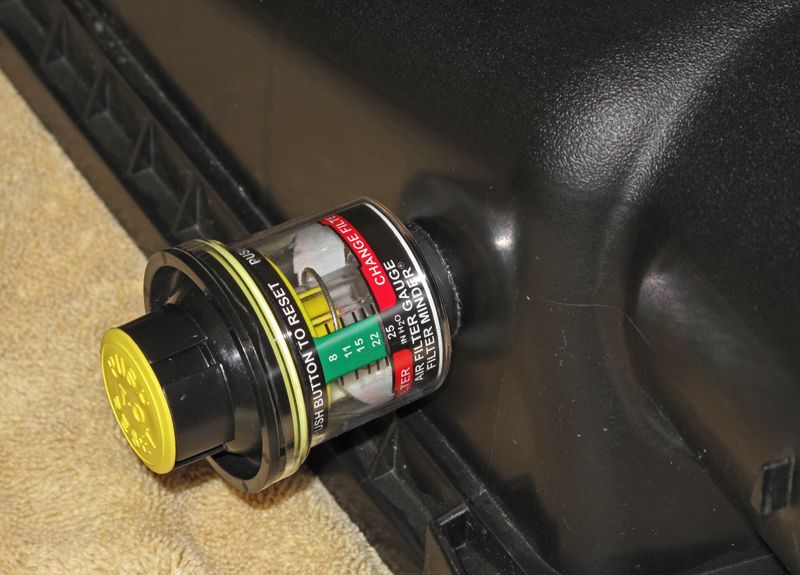 Re-install the MAF on the housing, connect up the intake tube, MAF clip, MAF wire holder and the 4 clips holding the Upper filter housing to the lower filter housing and the installation is complete: 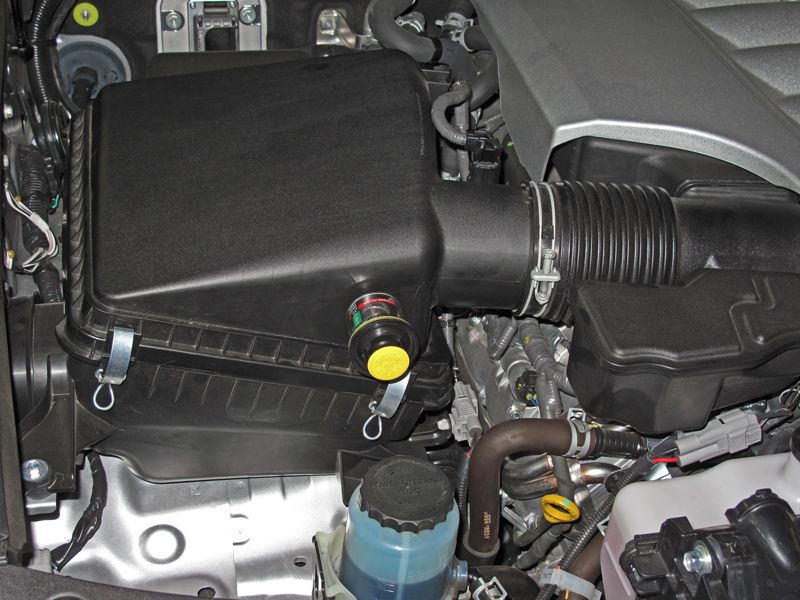 Wix advises that there may be some restriction indicated by the gauge even with a new air filter when used under a "full load condition." This is normal. To determine if there is any restriction caused by my stock setup with a fairly new (<5,000 miles) stock air filter, I did an uphill 0-90mph WOT stint that should have revealed any restriction.

After the run, the gauge still indicated no restriction: 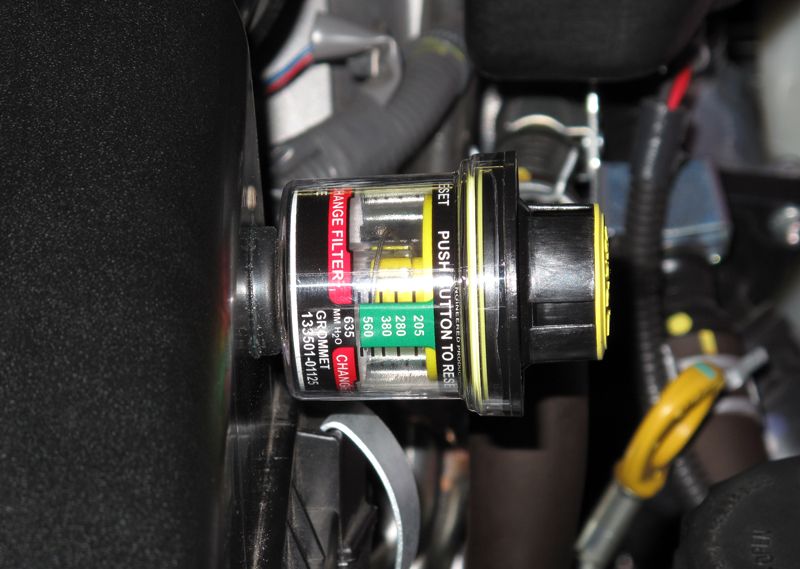 The Wix Air Filter Monitor is inexpensive, easily installed, provides a valuable indication of possible air flow restriction without having to take anything apart and it is made in the good old U.S. of A. What's not to like?

Hope you found this interesting/helpful.

x2. Thanx for the write up.

x3 gaijin! Although not a 200 but a 100...I was going to install one of these last year and, well, forgot! So thanks for the reminder

It will be interesting the life of the 200 air filter. I have a friend with the same monitor on a 80 series and based on the gauge the air filter is still OK after 2 years of wheeling.

wonder how a turbo setup will affect the monitor if so ..

These come with TRD Airboxes. The one on my Supercarged Tundra doesn't trip with the stock filter.... but the air cleaner assembly is large (same filter as the 200). The gauge will only show restriction if one exists upstream of its location. So if your air cleaner assembly is restrictive to the turbo, be that from dirty filter, a filter that is too small, or an air box that can't flow enough, the gauge will show it.

Tapage said:
wonder how a turbo setup will affect the monitor if so ..
Click to expand...


Whether Turbo or not, all this gauge is doing is measuring/recording any vacuum created after the air filter.

Should still be beneficial with or without a Turbo. After all, we are not talking about Manifold Vacuum, but rather vacuum inside the air filter housing.

Thanks got that clear as MUD 2 on my cart now

radman said:
This thread needs to be bumped to 2020!

Also, @gaijin, I've seen you recommend a k&n part number 85-2445 instead of the Wix 24801. Are they same same item only rebranded (similar time the US air filter vs the Japan part number)?
Click to expand... 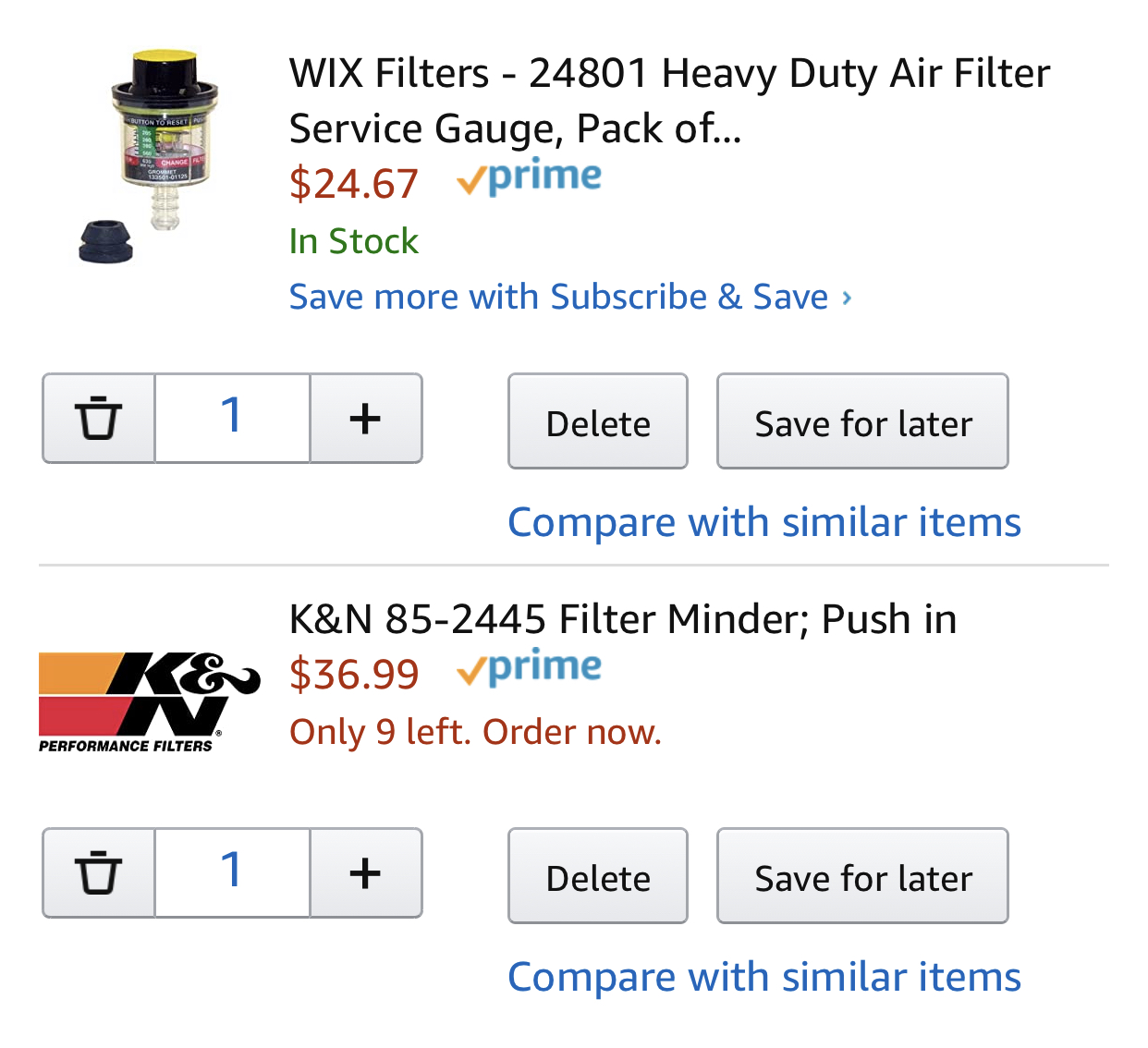 radman said:
This thread needs to be bumped to 2020!

Also, @gaijin, I've seen you recommend a k&n part number 85-2445 instead of the Wix 24801. Are they same same item only rebranded (similar time the US air filter vs the Japan part number)?
Click to expand...

HTH
You must log in or register to reply here.