A little over a year ago I was checking out Facebook one night when I noticed that a family friend had decided to auction off her late fathers 1974 FJ40 Land Cruiser the next day. It was an emotional post about how her mom had finally deciding to part with some of his favorite things, so it made me more than a little sad. I knew her father, having attended college in the small town where they lived and through my new family. He was a great man! One of the nicest people I had ever met, and a great college professor at the rival college across the highway. Google Ouachita Baptist University vs. Henderson State University, or pick up last months Sport Illustrated Nov. 2019. The battle of the ravine is one of the oldest rivalries in the country. So despite teaching at the wrong college, I really liked him. I would occasionally see him driving the LC around town, and he always seemed so happy. I envied him for having such a sweet ride.
In passing later that night I mentioned to my wife that our friend was planning to auction off her dad's Land Cruiser the next day, and showed her the post and pictures. My wife's younger sister had been best friends the friend making the FB post, and my sister-in-law had actually driven what they called the "green machine" in high school. They would cruise the LC to Sonic, and my sister-in-law would drive, because her friend couldn't drive a stick shift. I went to bed that night wondering what it was worth, and what It would take to restore the 44y/o truck. The next day I woke up still thinking about the post and the LC. I decided to do a little research to find out what it might be worth. Everything I could find online was all over the place. The range was 15 to 60,000 based on condition. All I had to go on were 2 pictures on FB. My wife was on her indoor cycling trainer doing a 2 hour training ride, when I mentioned in passing that the auction would be staring soon. I got busy doing something after that and forgot about the auction. An hour later I noticed that my wife was talking loudly on her cell phone while still riding her bike. I went to see what was going on, and she told me she was in the middle of a bidding war with some guy over the Land Cruiser. I was shocked! I asked what the last bid was, and when she told me I was shocked again!!! I immediately starting making the sign for stop now. You know the hand to the throat back and forth. I was too late she had already decide this was a competition and that she was going to win at all cost. I could see the crazy look in her eye, and it scared me. As the price kept climbing, I kept telling her stop that it probably wasn't worth the price they were at. As you can guess she won, or did she? After the bidding was over she was on the phone with the friend, and she was in tears. She told us both how thankful she was that the LC would be staying with someone she knew and could appreciate it's history.

A month later I was on my way from Nashville Tennessee to Arkadephia Arkansas to pick up our LC. On the drive I spent some time praying that it would be in great shape and somewhere close to worth what my wife paid for it. When I arrived to pick it up, it was in pretty good shape. Running, drivable, and the rust didn't seem to be that bad. I got to spend time with my friend and her family, and to talk about the history of the LC. It was a great day! After getting back to Nashville I got to inspect our new truck more closely. The good news was it ran well enough to get it off the trailer and in the garage. The rust was in all the usual places, but didn't seem to be too bad. Everything worked lights, gauges, original radio, and heater. I spent the next few months doing as much research as possible and trying to find local LC owners to talk to. IH8MUD was, and has been an invaluable tool during the last year of research and connection to others. I was able to locate a great group of guys here in the Nashville area with years of experience and knowledge. @Rainman @Vae Victus @oldschool4wheeling.

Flash forward to this week. This week I began a partial restoration project of the "Green Machine". The plan at the present time is to get it running and mechanically sound, so I can enjoy driving it for a while before eventually doing a frame off restoration. My sister-in-law will be here for Christmas in a few weeks, and I'd love for her to be able to drive it again after 30 years. I've learned a ton in the last year, and have enjoyed reading many of your threads from start to finish. Thank you all for answering questions that you've probably seen a thousand times, and for sharing so much you your builds with me. We've been a Toyota family for many years, and at present we have a 2018 Camry Hybrid, 2017 Tundra, 2014 FJ Cruiser, my oldest son's 2008 Highlander Hybrid hand me down, another son with a 2015 Tacoma, but the LC has become the crowning jewel of the collection. I will try to keep this up to date over the next few weeks 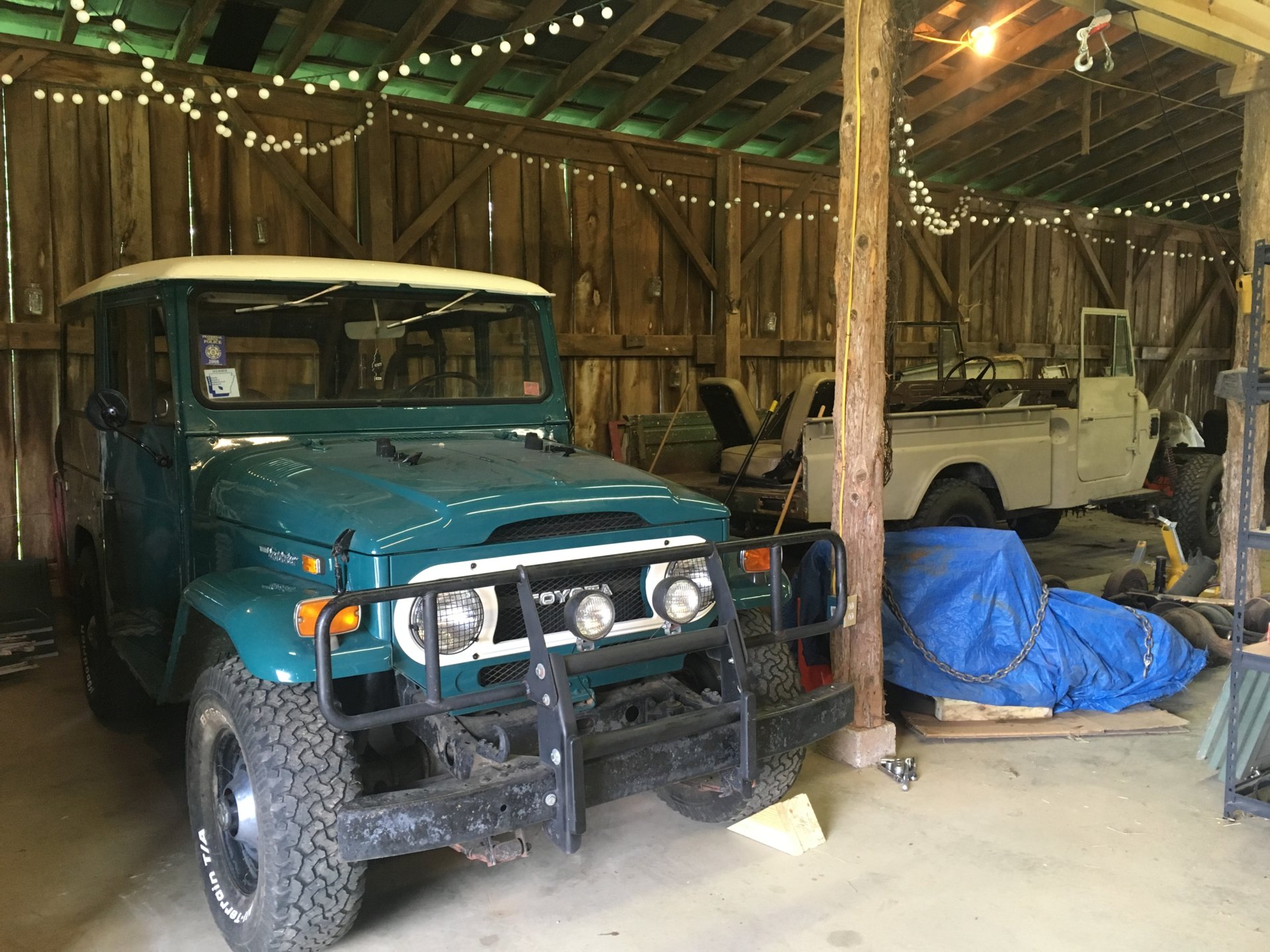 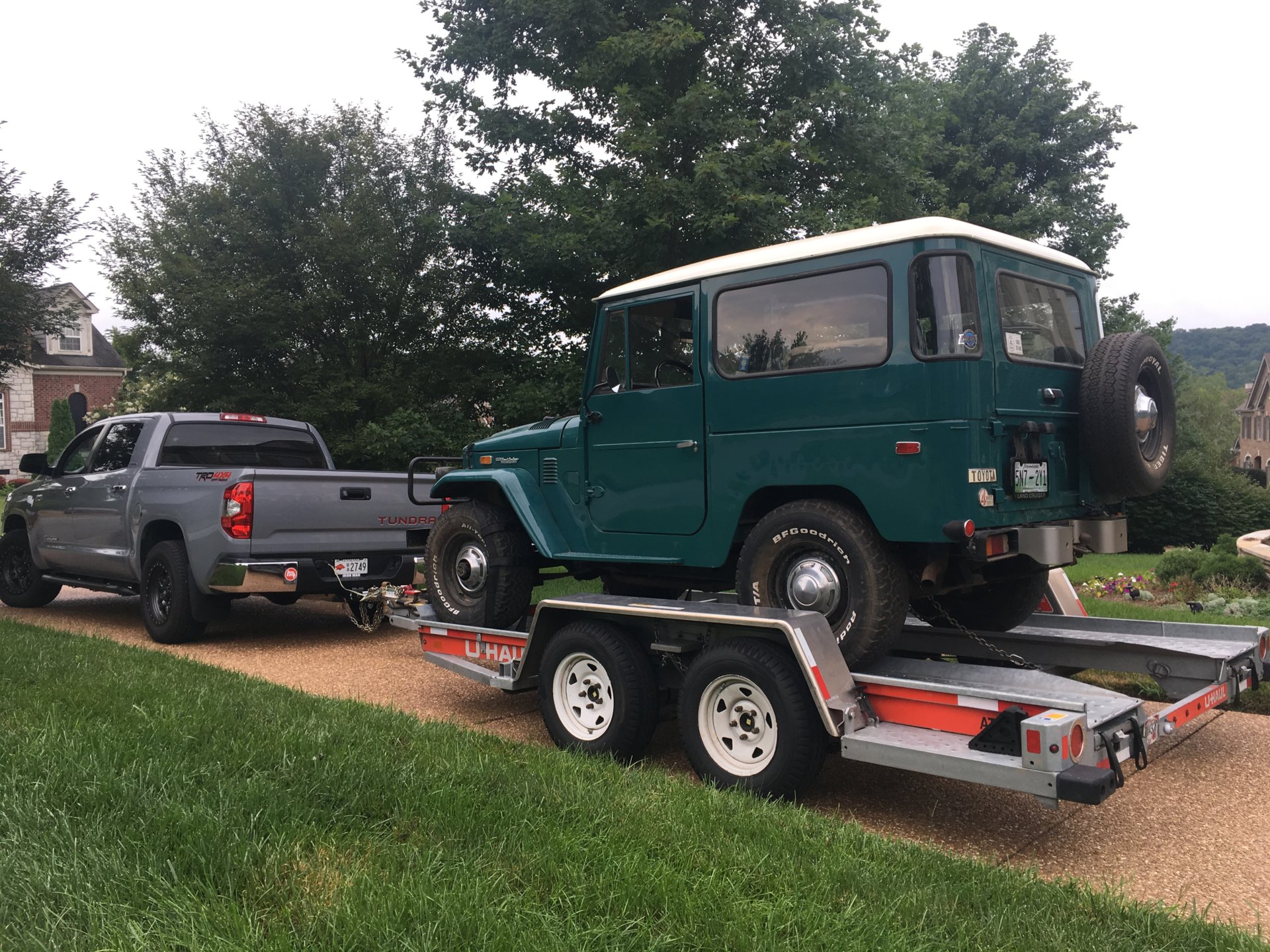 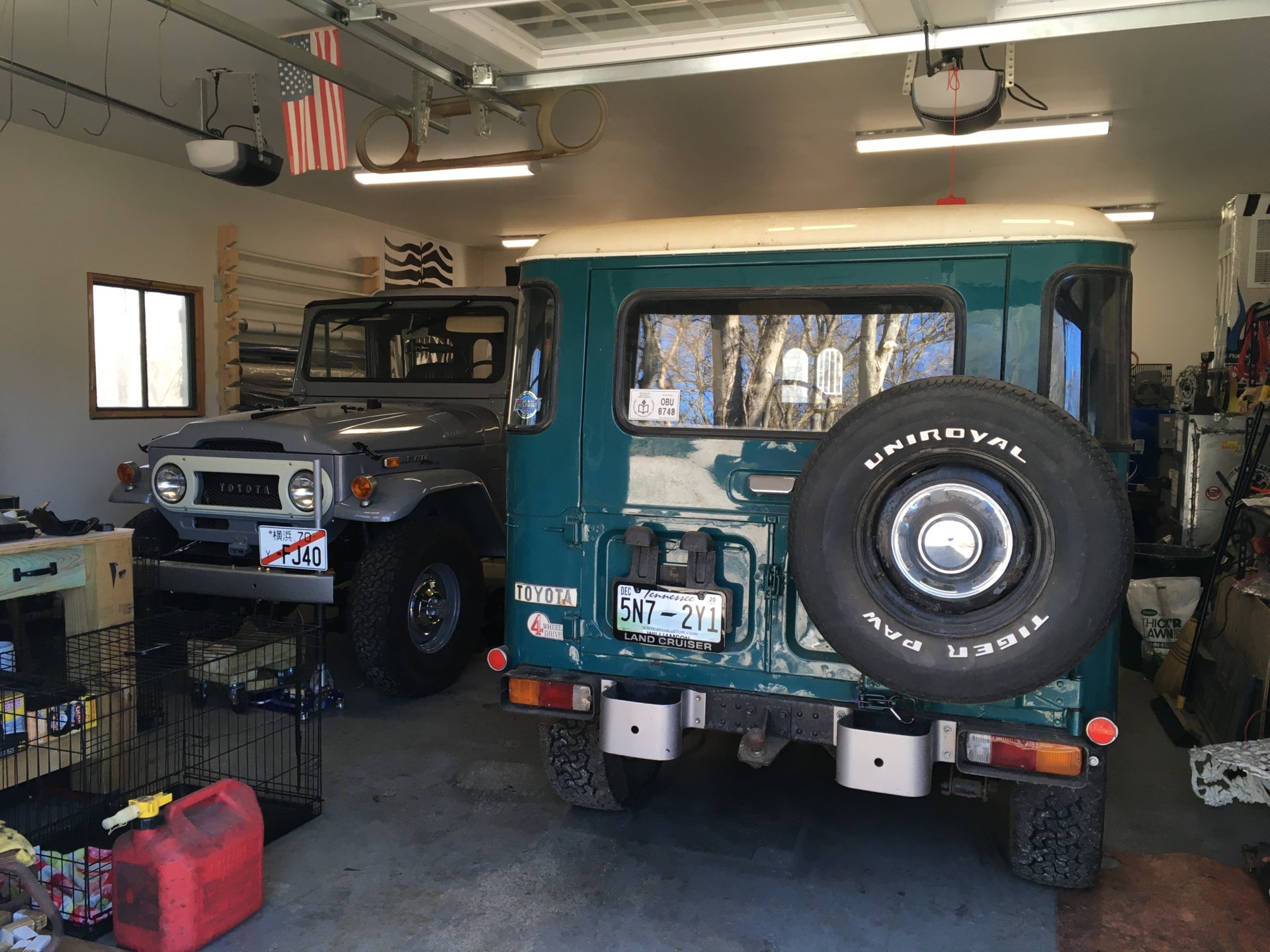 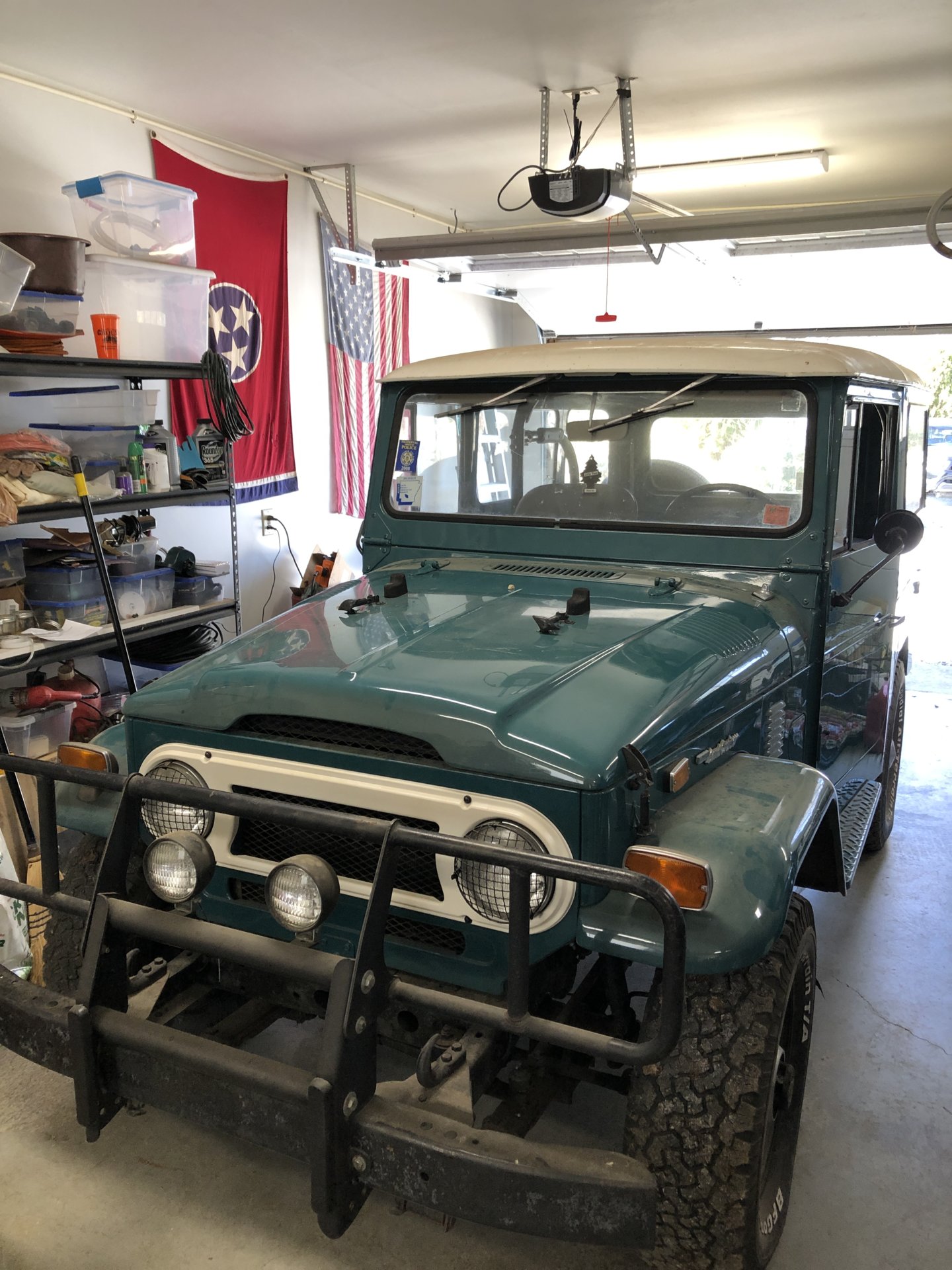 i'm not convinced that you're familiar with what "rust in all the usual places" is.

Actually, he is. It's not not bad enough to see it in the photos. It is in decent shape but will need some serious love eventually... Which is the plan. The last two shots are in my garage bunking with STPCHLD. Just barely scratched the surface but will be working together on it over the next week or two. This will be fun... For both of us.

brian said:
i'm not convinced that you're familiar with what "rust in all the usual places" is.
Click to expand...

It's there, trust me! Don't let the shiny pant over rust fool you.

Who’s other cruisers ... they nice as well
... didn’t see you mention them

JohnnyC said:
Who’s other cruisers ... they nice as well
... didn’t see you mention them

I left @Rainman hanging. Wasn't sure how much to mention about his projects. It does still have the original F.5 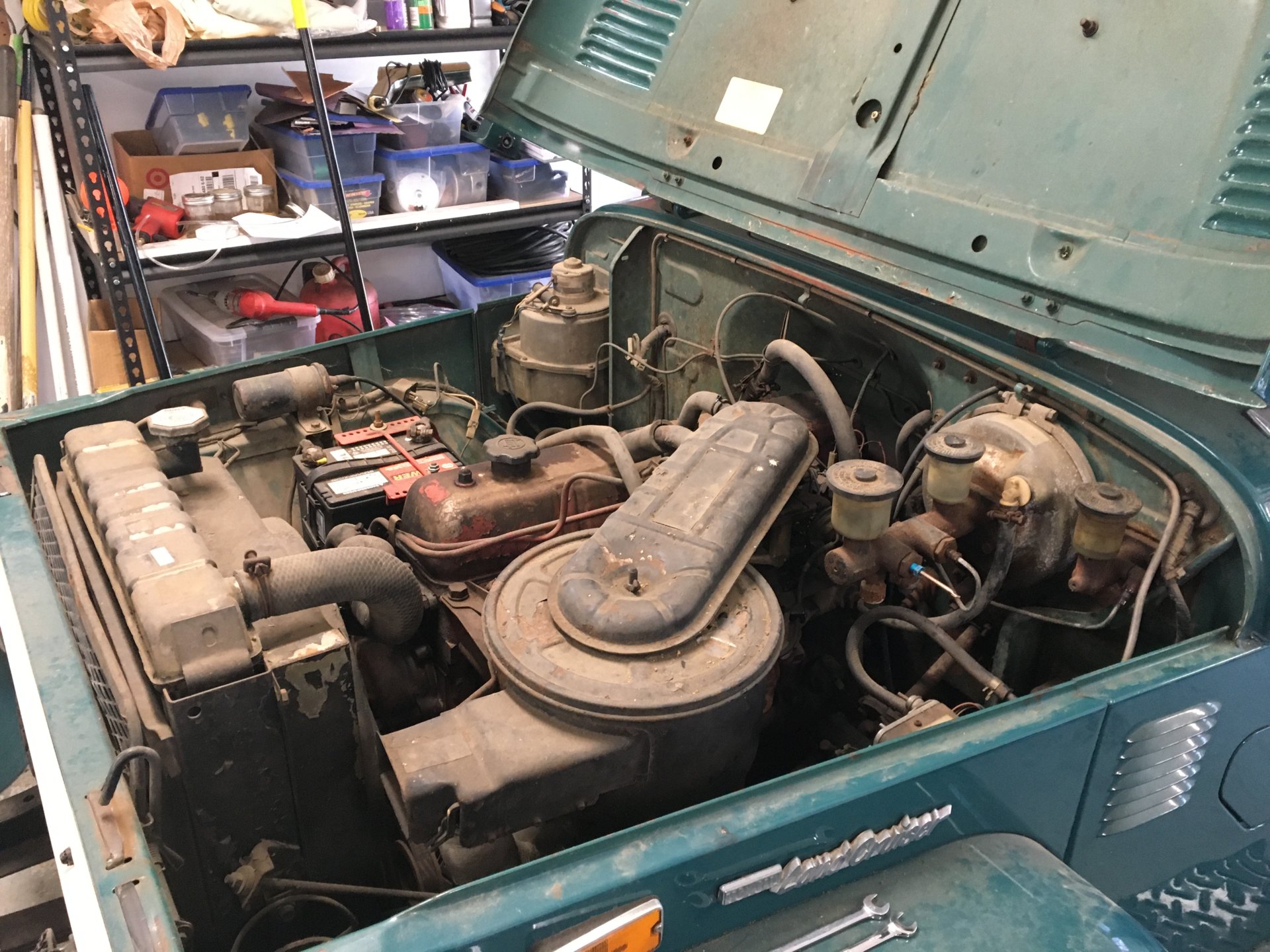 Looks like an fj45 in the background in your first picture. Wonder if that’s for sale?

tjhaga said:
Looks like an fj45 in the background in your first picture. Wonder if that’s for sale?
Click to expand...

It probably will be someday after @Rainman finishes restoring it. He plans to start on it after he finishes the gray one next to mine, build thread STPCHLD. It's amazing and where I hope mine will be someday. I'm sure He will make the 45 just as impressive!
Last edited: Dec 8, 2019

Both the grey FJ40 and the tan FJ45 builds are in my signature below. If you're interested, check them out. As of this moment, GRNMCHN is in line for a complete go through. But that's at least Chapter 2. If I've only learned one lesson in life, it's: "Anything can change in a heartbeat." So no promises.

When I said in my initial post that I was starting a partial restoration of my LC, I miss spoke. @Rainman and I are starting the first phase of what will hopefully be a complete restoration of my LC. When I started searching Mud for local LC owners @Rainman was the first to respond to my questions about middle Tennessee LC owners. He invited me to a social gathering where I met several really good guys that have answered a million questions for me. Most people on Mud know @Rainman as the brake lines guy, but he has been building cruisers for most of his adult life, and I asked if I could help him whenever needed just to learn and gain some realtime experience. Over the last year I've helped him with the resurrection of STPCHLD and built a little sweat equity in the process. Rainey is now helping me get started on GRNMCHN. Next in the que will be the 45 pictured in the background of my first picture. All of Rainey's builds have great back stories and that one will has one you don't want to miss!

Neil got his first successful drive around the yard and then to the muffler shop yesterday. One pumped up guy! The clutch works for the first time. The brakes are all but adjusted now. Within a few hours, the exhaust will be complete. Sure enough, the shop ran the exhaust the same stupid way the PO's shop did. Right under the skid plate after I told them it was run wrong. He actually said, and I quote, "You will be very happy with the results. I promise." When Neil went back to pick it up, it was done.... Wrong. So it went back in for a redo this morning. I'll be picking it up soon. Neil's sister-in-law will be here in a few days and the goal was to have her be able to drive it again after all these years. We're damn close!

Just found out you can't upload a movie file. Images to follow later. Neil is most definitely out of town for a few days. Way out of town...

Man. 1 step forward, 1/2 step back. I can't believe this wasn't known when purchased but the exhaust manifold is TOAST. It's got such a huge leak that the truck is just as loud with the complete exhaust as it was without any of it. I'm serious!

Anyone able to confirm that an F motor manifold will fit a 1.5F? I'll check it out tomorrow and see if I can prove it. Because of STPCHLD, I just happen to have one.

OK. We got the one step back returned. I pulled the trigger and yanked the near perfect manifolds off the STPCHLD, the rebuilt Toyota carburetor, the new fuel line, the new exhaust pipe, AND the renewed air cleaner housing and plenum. The dead engine in the 3/70 has some awesome parts it won't need anymore since it's toast. Selling the lot to this project but don't know the price yet. What's debt between friends... I just need to pull the muffler and tail pipe and stack it back up. Then we'll start her back up. Maybe Monday.

Neill even said, "It kinda looks like a silk dress on a pig!" After he drives it for a while, it'll be a good start for chapter 2. 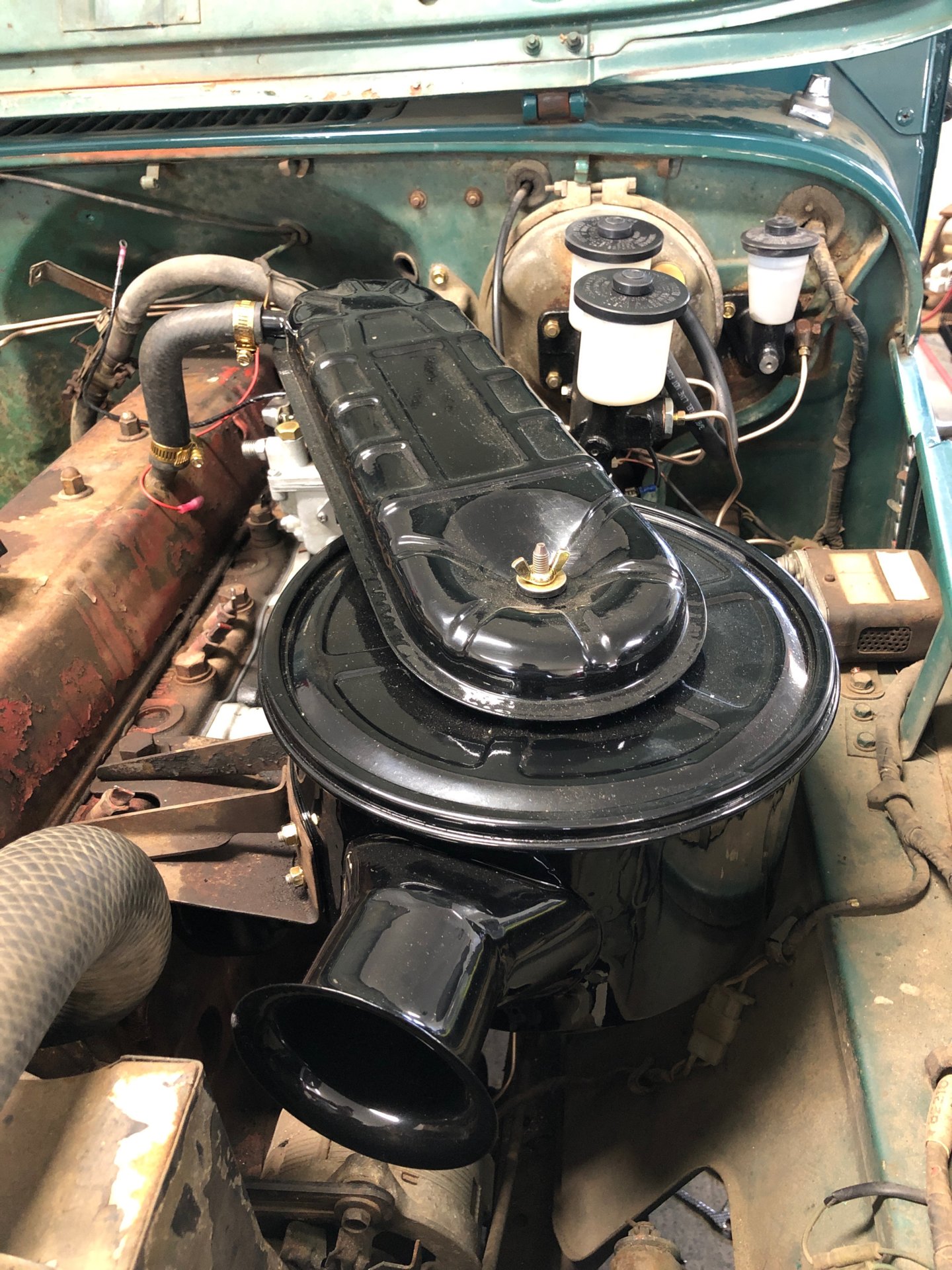 But I just got the word earlier today that Neil is pulling the trigger for us to do a "Just like STPCHLD" build. That means, no holes barred and off we go possibly next week. We'll be tearing the whole truck down and sending off the engine for a good refreshing rebuild. I guess this means a new thread called Episode 2? Maybe Neil will chime in.