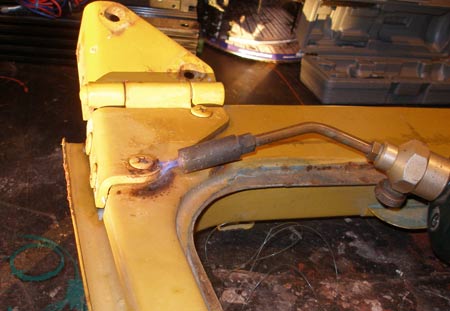 Got 7 of the eight windshield bolts to come out by heating them up and using an impact screw driver. The last one had to be drilled out and tapped after it's head broke off. 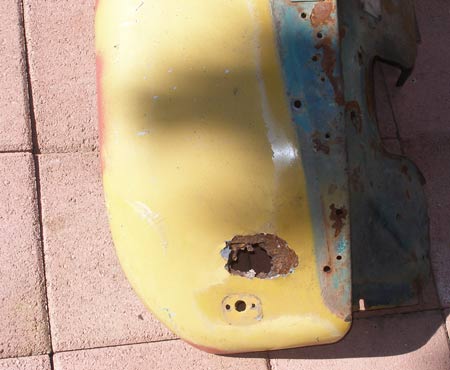 Both fenders had rust holes under the bubbles, where the turn light support mounts. 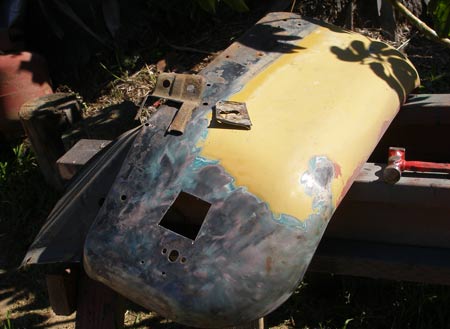 This fender had to be hammered out because of the accident that netted me my air lockers. Link to accident pictures. 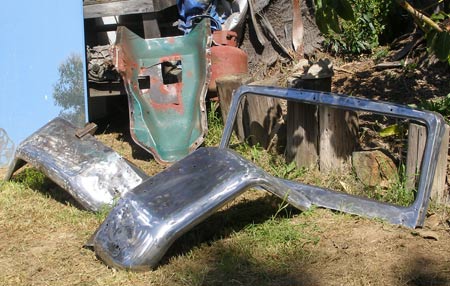 After rust holes were replaced with metal, and every thing wired wheeled down. That windshield frame has lots of edges and I am sure my neighbors are stoked I'm done with this part.

Thanks to DomSmith for stopping by and giving me some good words, and best of all a 6 pack. 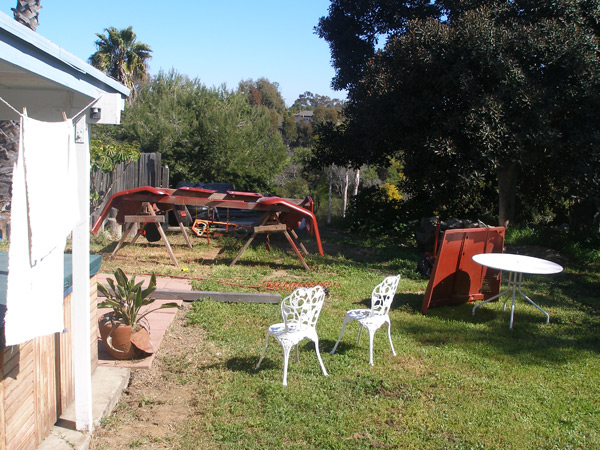 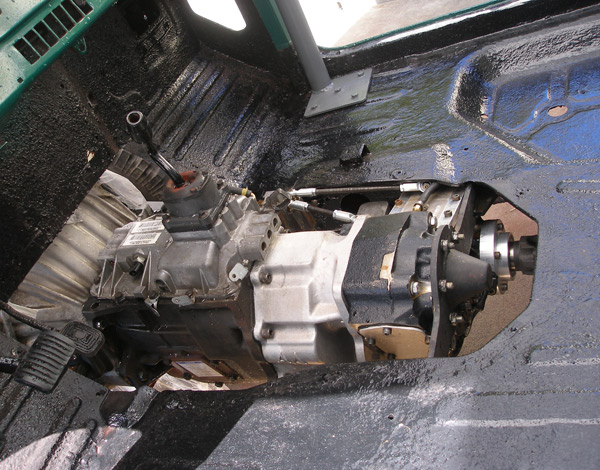 me mad looking at the fresh Orion.

just the bottom of the transfer case is poking below the frame line. Drive train is tucked up nicely. 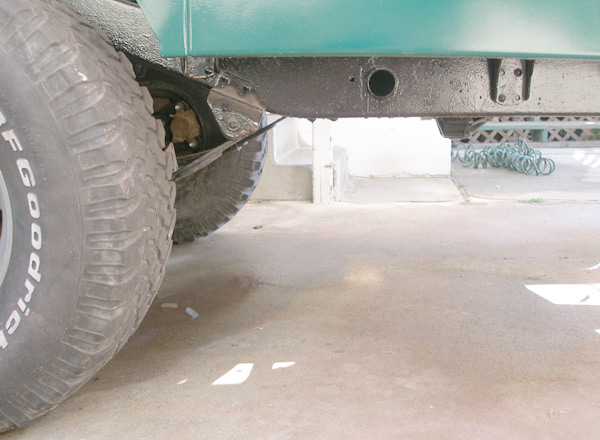 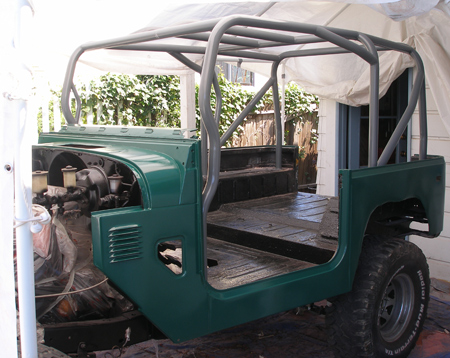 One Windshield hinge pin was broken at two spots, allowing the hinge to pivot, the other one would pivot. The one with the broken pin was easy enough to separate into the two main hinge parts, but the pins left in the hinge would not press out, even with prolong exposure to heat. I ended up drilling them out. The centers pressed out with heat, after the bushings melted, but still was not fun. The Hinge that had the solid pin would not press out at, all, had to drill at both ends to get it apart 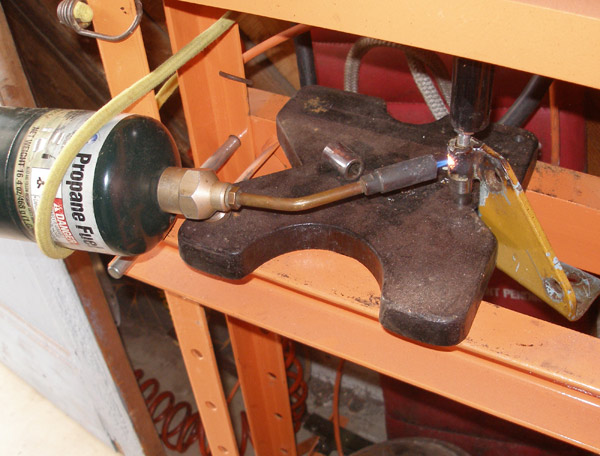 After hours of work, this is a very satisfying photo. 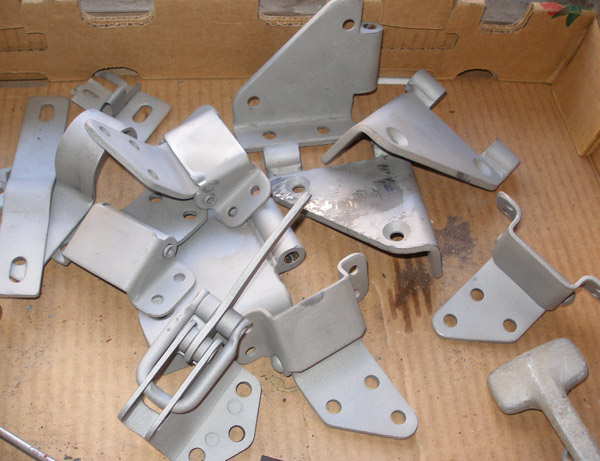 The guy who sometimes sells brass bushings on Ebay is sending me enough bushing to do the doors & the windshield hinges.


On to the fun stuff. The shifters for the orion hd, are blocks with holes, in them, and shifting shafts. I have seen photos where some put a tack weld on to hold it in place. I decided to drill a hole, and weld on a nut, then use a bold and extra set nut, to secure mine. I had at first treaded the drilled hole, but did not feel there was enough thread. 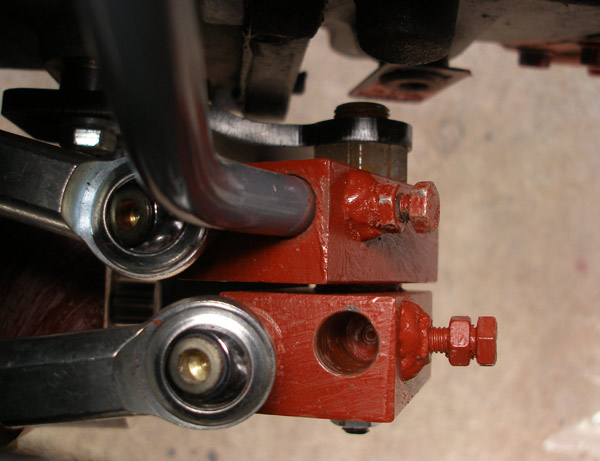 Doing this allowed me to adjust the shifters as I went to get the best line up with the existing hole on the trans hump.

I decided to paint the shifter shafts the same color as the cage. 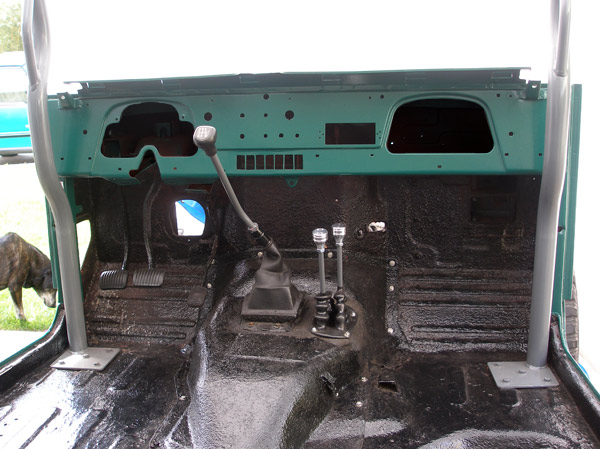 thats real nice work you're doing there
thats probably why i like these jeeps and want one.they are all meatl and none of the plastic shyte.

i will be welded to this thread.well done

and black smoke to the sky

Just amazing! You're like one of those build shows that make people feel like they can build anything. Then reality sets in after you have taken everything apart, then ya sell it because you can't put it back together. HA HA! Outstanding work...
1976 FJ40 with an 86' 2F, rusty stock. Needs lots of work and upgrades

that's about it.
1966 Bronco halfcab that I will give you to do my body work!

alwayscme said:
Just amazing! You're like one of those build shows that make people feel like they can build anything. Then reality sets in after you have taken everything apart, then ya sell it because you can't put it back together. HA HA! Outstanding work...
Click to expand...


It comes down to knowing yourself and your staying power. This is not my first large project. It is my first large fj40 build. I have always been one to finish what I start, even if there are bumps in the road. If you are accustom to not finishing projects, make sure you keep your day job where you have a boss that can be your mom.

Thanks for the support, and I hope to document this as well as I can so maybe those who are thinking of starting a large project like this, see allllll the pain involved before they start, and more importantly, I hope to help others when they hit some of the same pitfalls I have.

lookin good, what do you plan to do for an ebrake, since the HD version doesn't have a rear drum?

How did you get the drivetrain tucked up that high? I'm jealous. No body lift, right? Any floor board mods? I have a similar drivetrain and it hangs down about 4-5 inches. Does the orion hd tuck up a lot higher than the stocker?

Noah - Line Lock for now, and maybe a wheel chock. Along with new exhaust, sliders, and stinger, those are all things to contemplate after I have it up and running.

Senor Aguas - My engine sits as far forward as I could get it, I was able to keep the rear crossmember. The Orion is about the same specs as the original TC. The rear AA support bracket is very very close to the bottom of the tub, I did have to notch out the little lip, that bends down around the trans hump opening, so it would not touch.(it was not touching after I put in the new body mounts, but cut it it just incase). I have had someone say it's too close because it would add noise.
I never noticed it over the old screaming TC, it was always loud. I also took about 3 days of realigning the Drive line, before I welded in the mounts.

Nice Job, how do you manage to get all this done in your driveway? Must take a lot of patience..... From your neighbors...
68 FJ40​
FJ70 Disk Brakes/Aftermarket Electric Fan​
Power Steering/ 1FZ-F engine,Series 70 Gearbox​
Frame off started on 12/28/2009 and still going​

jtoro said:
Nice Job, how do you manage to get all this done in your driveway? Must take a lot of patience..... From your neighbors...
Click to expand...


NO HOA . Old neighborhood. And I am not doing it every day. The worse of it was when doing the cage. The guy right next door, on a hot weekend day(when everyone has their windows open) did make a request that I kick back for the afternoon. We are on good terms so it was not a big deal and I understood. I mostly work on it during the week, so not too many around during the day.
CA - San Diego Cruisers

Excellent build man, thanks for the read!

Spent most of the day putting together the head lamps. I had a spare set of head lamps. To reclame the adjuster bolts, I melted the threaded plastic inserts, then cleaned up the treads. Also the rubber groments were in good shape too. 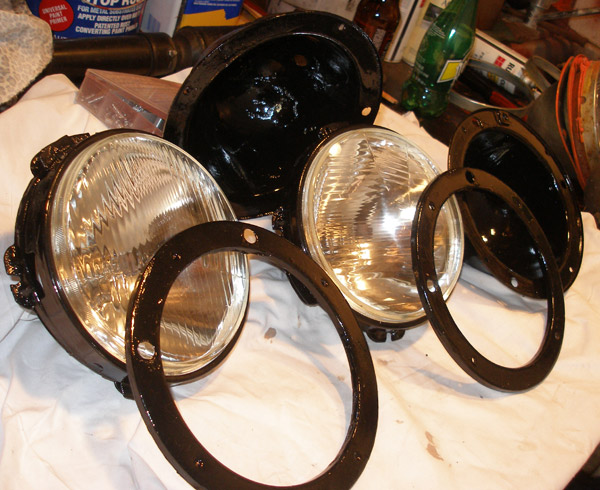 I like how the early front bib's head lamps, rears are enclosed, unlike the one originals from my 73. The one on the right's, head lamp connectors were extreamlly weatherd from being exposed.

Here I am starting to get ready to start making my wiring harness. I have a fuse box out of a S-10, lots of connectors, shring tube, and mucho new wire. 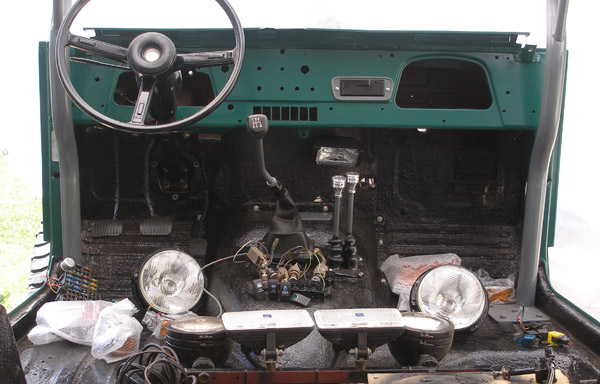 Here is a basic digram I had to make to mate my 3 different Years lights & switches & s10 fuse box, and side marker lights that also work as turnsingles. The rest of the wires I can run from other made diagrams in the tech section, but I had to make one of my combination of lights and switches. 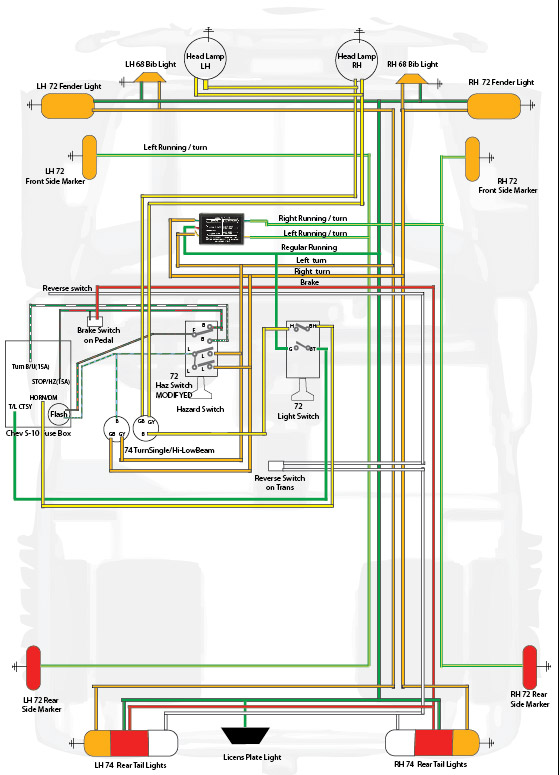 To make the side markers work as turn singles, i am using a 3 to 2 relay.
Curt Manufacturing I-24 - - summitracing.com

The front bib lights were wired to use only the running lights, even though a two filament bulb can be used. So to have the bib lights be used as running lights and turn singles, I Cut the ground wire and ran it inside. With a little solder and a test it works fine. I will ground the light off its mount nut.

two more weeks until I go up to LA for SOR sale, and get windshield. Should be able to drive then.

When I put the front end together, I cut out Polyurethane strips from a sheet I bought from here: Polyurethane 95A Durometer Precision Sheeting - US Plastic Corporation
I got the $40.00 piece. Will be plenty to do all hinge to body areas.

I ran it where the bib meets the side apron, and fender. Also where the fender meets the tub. Also cut out a rect for the bib hinge mounts to the bib and frame.

And got some gauges.

Everything looks amazing, nice work!
I had to stare at them for a long time but I finally decided that I really like the gauges. It'll be cool to see them installed.
Where are they from?

AndyM said:
Everything looks amazing, nice work!
I had to stare at them for a long time but I finally decided that I really like the gauges. It'll be cool to see them installed.
Where are they from?
Click to expand...


I could do without the "Power" text, but was the best set for my eyes that I could find, with an electric speedo. The speedo came with an adaptor, so if you don't have a built in sender unit, like I do on the orion HD, you can hook up your speed cable to it. To set it, you hit a button, drive a mile, then hit the set button again. Therefor if you change tire size, or gears, you can reset your speedo.
http://store.summitracing.com/partdetail.asp?autofilter=1∂=SWW%2D82246&N=700+115&autoview=sku
Last edited: Apr 30, 2008
CA - San Diego Cruisers

Last week, I fired up the engine. It said, " coff, sputter, backfire".
I checked my plug wires, and I had two swapped. Fixed wire order, fired it up. Much better, but almost immedialy I noticed my harmonic balancer looked odd,and was rubbing the timing cover. Cut power, and took a closer look. It had started to come apart, and was sitting crooked. The motor is a crate 4 bolt main, with about 40k on it. The balancer was some old part from I cannot remember. So, ordered a new one, rented a balancer installer tool from Kargen, and replaced it. I had to take my radiator out again, but no big deal. I was mad at first, but am now happy it happen during test fire, and not later on test run. The engine purrs now, and wants to power to wheels.

fj40_73 said:
two more weeks until I go up to LA for SOR sale, and get windshield. Should be able to drive then.
Click to expand...


Change of plans,
Local Glass shop is going to cut a piece out for me. I brought the frame down to their shop yesterday and they said they would cut one out and install it for $100.00, if I get the weatherstripping for it. Having the windshield frame off the vehicle makes it easy for them to work with.

So I called up cruiserDan and put the weatherstripping and key on order at a great price. Once I get that, I'll take the frame down and get the glasss cut. The whole thing is going to cost me less then if I would of driven up to LA and gotten just the glass at sor. That's not even adding in the cost of the weatherstripping & installation.

Also just placed on order a 4+ Swing Away Tire/Cooler. Been debating making one, but I have no time and I don't want to be driving around with out a spare.
Last edited: May 22, 2008
CA - San Diego Cruisers

FJ40_73 Build Thread
You must log in or register to reply here.

Found my oil leak - or did I? (ultraviolet dye pics in thread)
2