oops got all excited with the finger.
here is the pic. 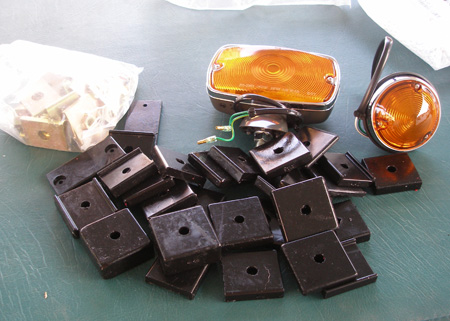 
good luck getting a hold of him. I called and email him numerous times a few weeks back and never got a response. So I made my own out of .25" aluminum. Looks awesome. I will post a pic tomorrow. I am sure from the looks of this thread that you have more than enough skills to knock one out. Great work on the 73.

Thanks for the info, I got one at a good price on ebay, eventhough I have to polish it up, because of shotty production.

Looking good bro. Keep it up! It looks like you've got a lot of work a head of you still, but you seem to be tackling the problems quickly and thoroughly.

I'll be lingering on this one!!

This is great keep up the good work and pics. Thanks for sharing 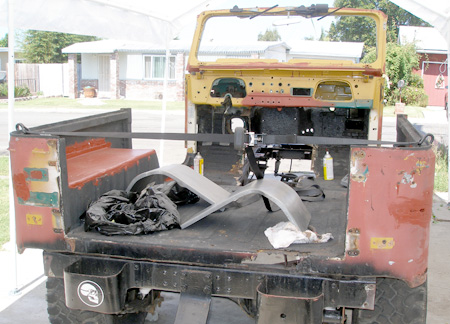 I measured up the rear gap, and sinched it with a strap to meet speck. 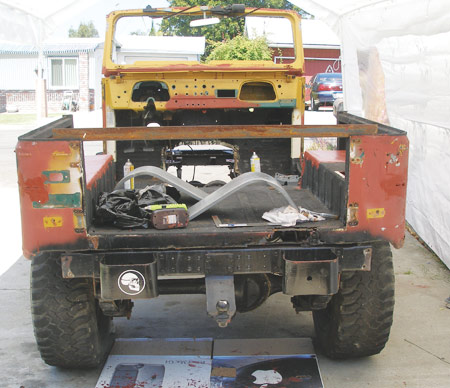 I bolted up a thick angle iron and removed strap. 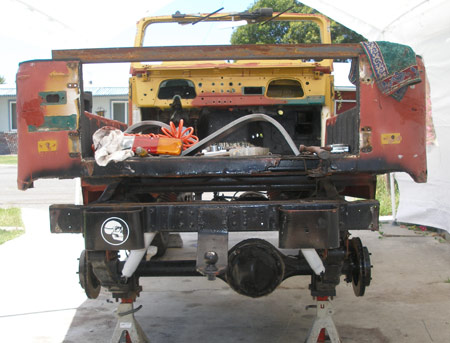 After that I unbloted, and sawzawed off my existing body mount brackets, and set the rear tub up a bit on 2x4s. Frame will come out from under body, after I finish up the body work. Trying not to look too spread out in the Driveway. 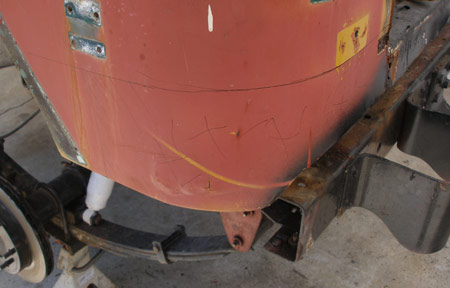 Here I have drawn out my cutting marks. 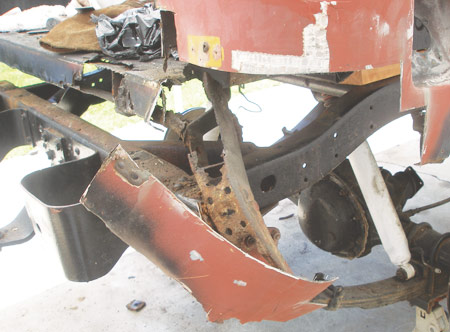 Crap... this was after cutting off the Right , side, support is rusted out. Another thing to make... 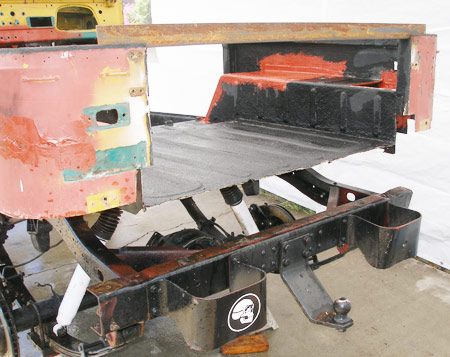 
As I started to make my new support bar for the rear, my crap ass Harbor freight stuff started crapping out.
First the elect shears. Got another one, and it broke too. Returning all, and have a good pair on order, that are made
in the USA, and have a cheap replacement blade.
The problem was most venders were out of these, but the manufacture said, they are still producing them. Must be slow on a production run. but found one.
http://www.tools-plus.com/kett-kd440.html

Then my air system started to crap out. My big ass tank compresses to 180, and all my lower rated crap broke.(hah, go figure.) Ordered a new main regulator, and a new quailty filter form Granger. 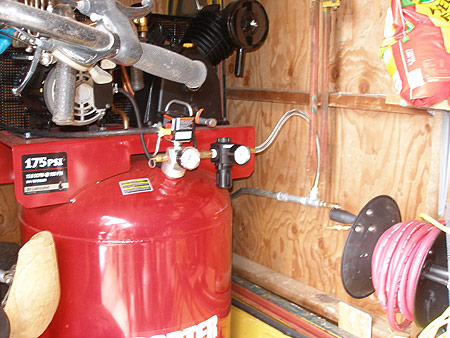 Compressor out in shead. 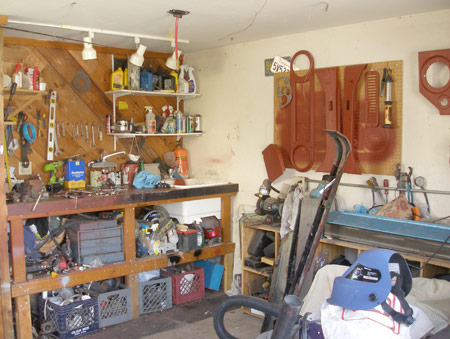 Now that air is back, I can do some work. But I also have a work load next week, so see how it goes.

Massive Love Hate at this Point. But I tried to order a Metal tech cage thurs-fri, but they seem to be out 4x4ing or something. Will order next week.

Looks good! I wish I had some fab skills like that. I ended up paying the cash for the SOR split case P-Brake kit but not sure that would work for you (aside from spendy). I don't know anything about the Orion. I did have some custom exhaust built in the last few months that run inside the frame rails you might want to take a look at. I'm in South O just let me know if you're interested.

DomSmith said:
Looks good! I wish I had some fab skills like that. I ended up paying the cash for the SOR split case P-Brake kit but not sure that would work for you (aside from spendy). I don't know anything about the Orion. I did have some custom exhaust built in the last few months that run inside the frame rails you might want to take a look at. I'm in South O just let me know if you're interested.
Click to expand...

snuck out side for a few hours today. Decided since I am waiting on my electric shears, I would start in on the Dash.

I have three ARB switches, and have ordered 4 more switches just like them from: http://waytekwire.com/ for a total of 7 switches. Some time ago I welded in a plate at the stereo hole. I put my dash pads on, and made a template, with illustrator, that would just fit, 7 switches, in that space. 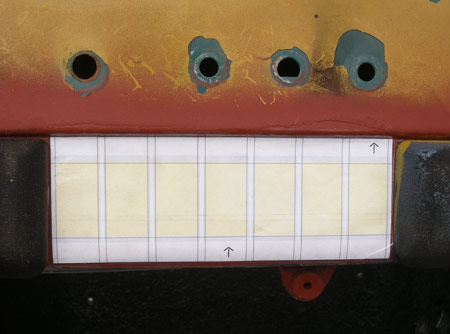 Here you can see I have taped my template on, and did a double check before cutting. 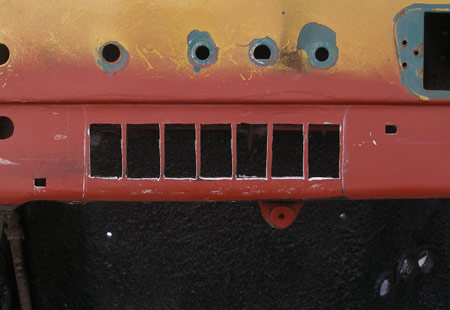 My cuts were not perfect, but, well within tolerance. I was suprised at the strength of it, being that the slits are thin, but it is 16g, metal i put in there, so that must be why, and because of the overall structure. 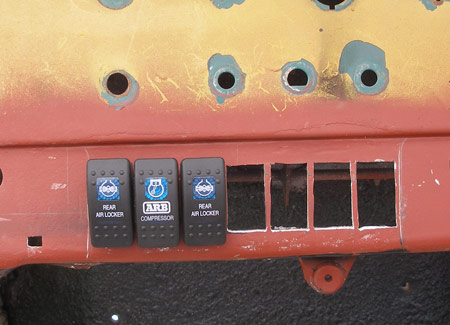 the switches just fit, with a tiny bit of space in between them. 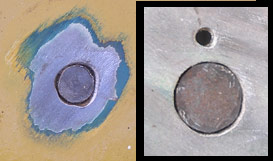 After that, I ground up some circles to weld in, to fill in about 4 extra holes the POs had put in. I should have a good picture of dash this week. Thanks for watching!!!!!

amg2y took me up on the free drum brake parts.
They are spoken for now.

soo, we have had good waves for the last two weeks, so not much work got done. 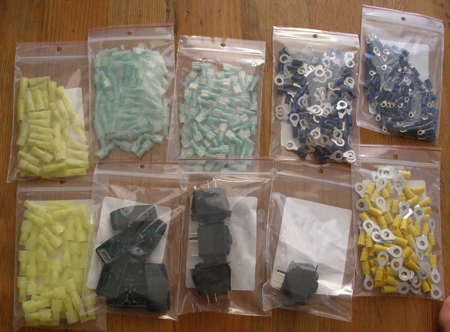 Got a delivery of switches and connectors. 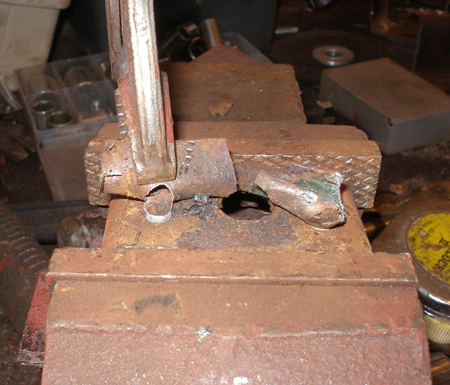 I decided to reuse the supports, in the back channel. I cut them out, and found the best way to get the old material off, was to use vice grips and twist.

My bend press will only bend so much, and I am running low on metal, so I ended up making the rear channel, out of three pieces. You can see in the picture the supports bars I slavage, from the orginal. 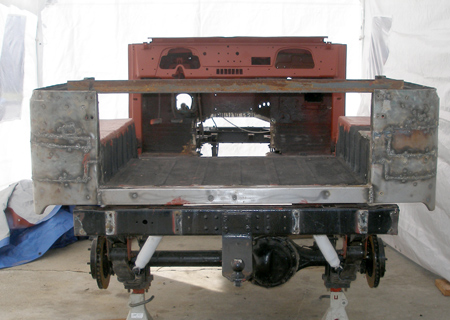 Here's the back end stitched up. After I finished this I had enough metal left to make the corners for the rear support bar. 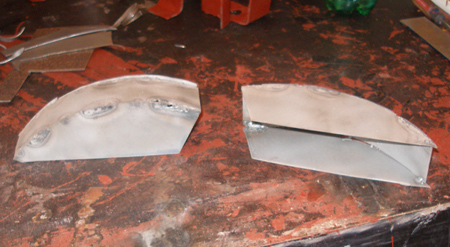 amg2y said:
I got all the parts yesterday. Thank you very much.
Got my drum brake fixed and I don't have to double pump the pedal anymore. Thanks, amg2y 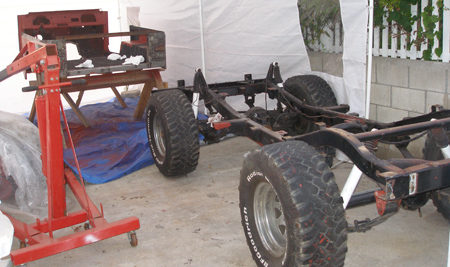 Rounded up some nabors to get the tub off the frame.

After I wire wheeled the top of my frame, and high pressure blasted it, I had to picked up my inspected NV4500 and Orian HD transfer case today. AA bolted it together for me, so what I did was: 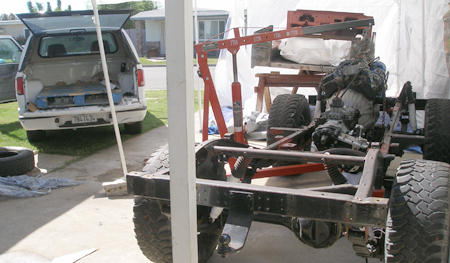 Hoist the engine up to the back of the tail gate, and bolted the trans to the engine. Then I swinged it all around and onto the frame. Yea, nobody around to help today, but no problems or strains. 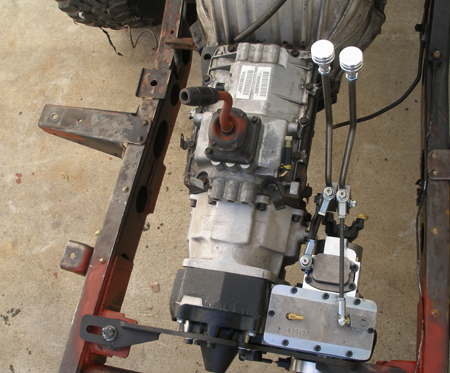 Here it is sitting on my frame. 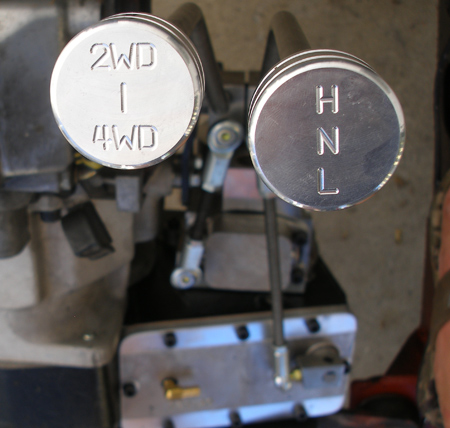 Close up on the shifter knobs they provided for the twin shifter. 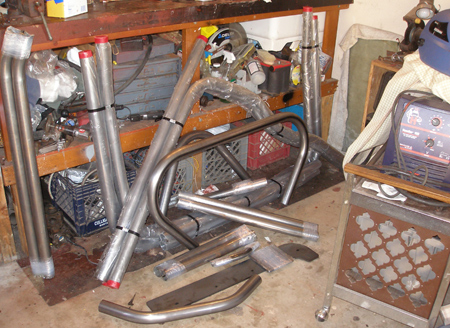 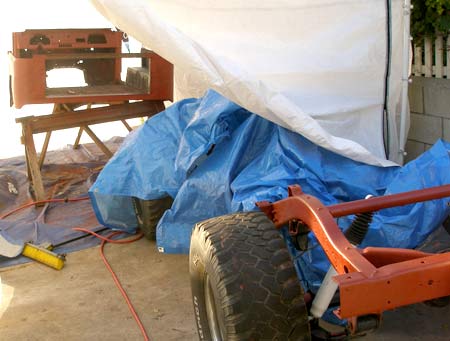 Too bad I don't even have the tub back on the frame yet.
I think by monday next week, I will be able to start in on the cage. I don't think I will put on the hood loop or stinger until I get a winch, and decide how to mount it all.

I have decided I will not be done in time to make it to Surf N Turf this year. I don't want to rush, and I want to enjoy this now that I am past the major damn body work.
Oh well, three years in a row is not too bad for SnT.

Thanks for sharing all your hard work with us!

That Orion HD t-case is pretty damn badass! But, the body work you showed is even more badass!

Looking forward to the rest of this thread!

Thanks for sharing all your hard work with us!

That Orion HD t-case is pretty damn badass! But, the body work you showed is even more badass!

Looking forward to the rest of this thread!

Thanks for the support, that body work, almost did me in. Glad to be past it.
You must log in or register to reply here.