I caught the Land Cruiser bug several years ago. Always knew Toyotas were extremely capable 4x4's but really wasn't a LC junkie until the last 3 or 4 years. I have owned 4wd mini trucks and 4runners off and on for 30 years.

Anyway, purchased my 2001 Land Cruiser in October 2010. One owner soccer mom car with 137k on the odometer. I have fixed the easy stuff like antenna, rear wiper straightening, etc but did my first mod about a month ago. I have been waiting for nice weather to take pictures.

I removed running boards and bought a 30mm rear spacer from Slee and cranked my factory torsion bars 13 rotations. I refinished my factory 16" rims with Duplicolor graphite and ordered a set of 285/75-16 BFG AT Load range D from Tirerack.com. I think I am pleased how it has turned out so far.

I know that my CV boots have let go on both sides so I am thinking about new boots and clamps and possibly the Slee front diff lowering kit. 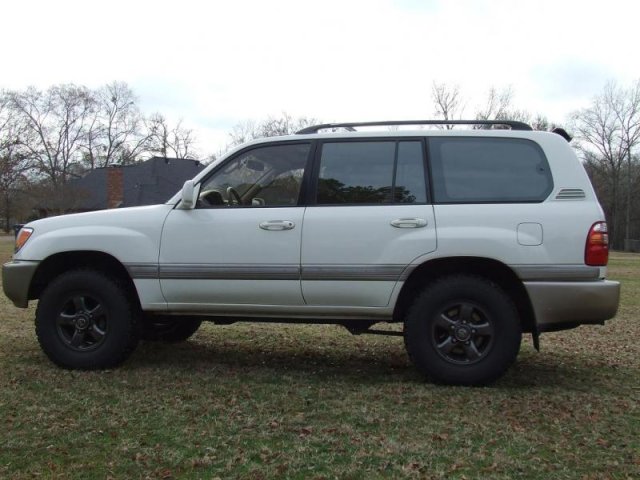 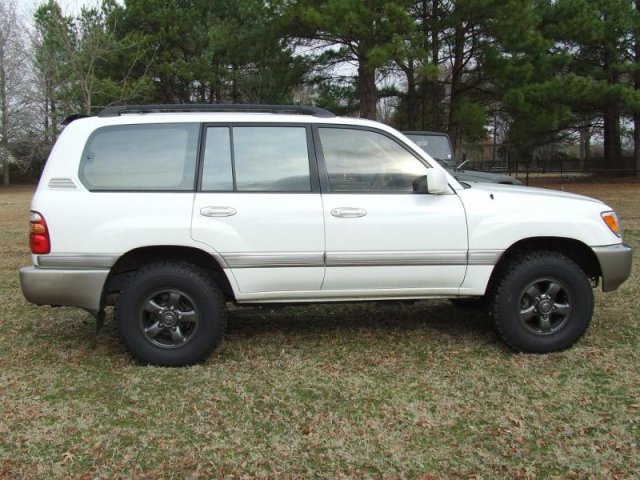 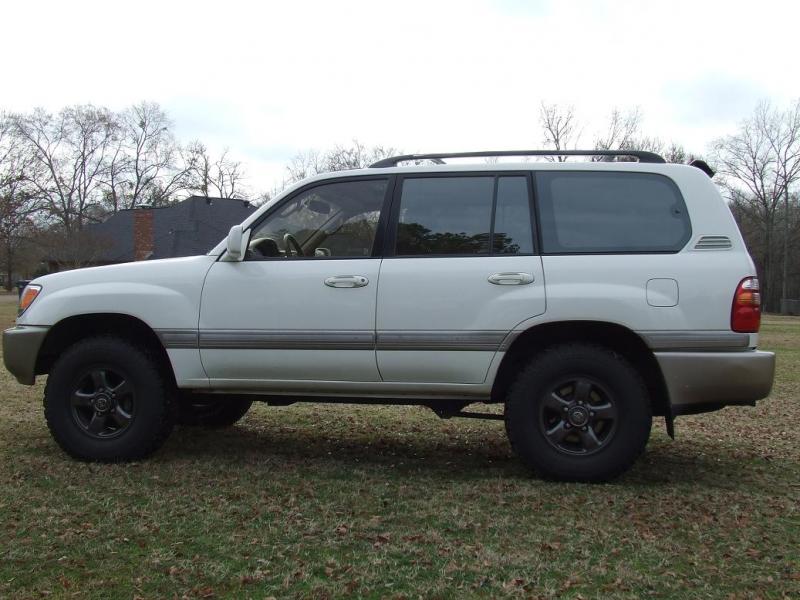 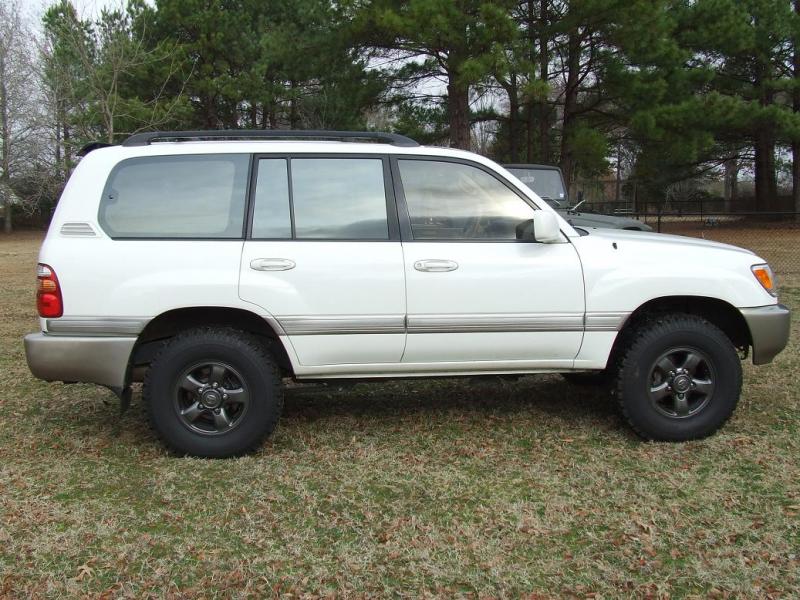 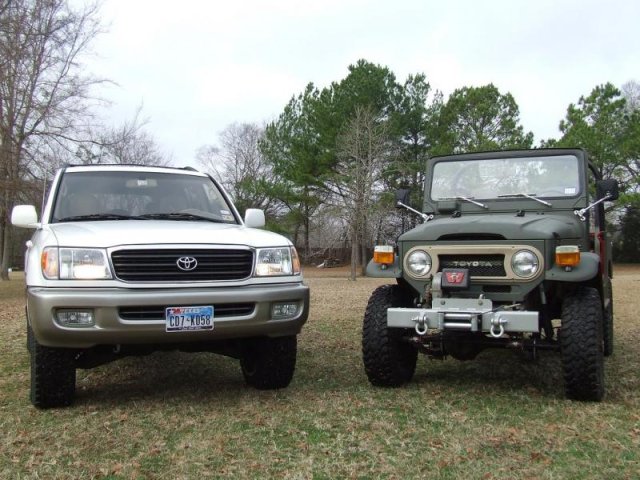 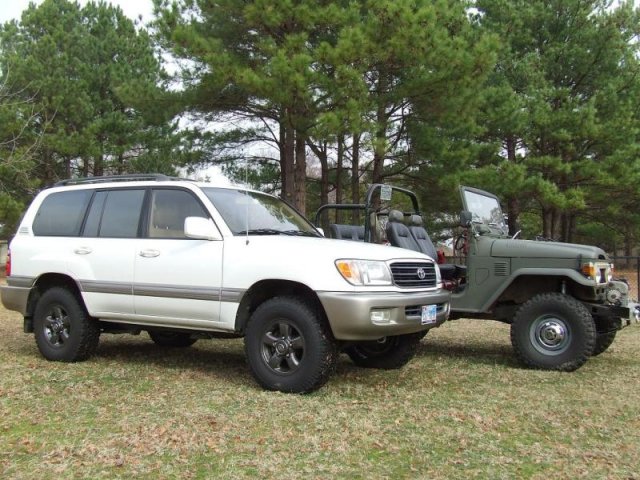 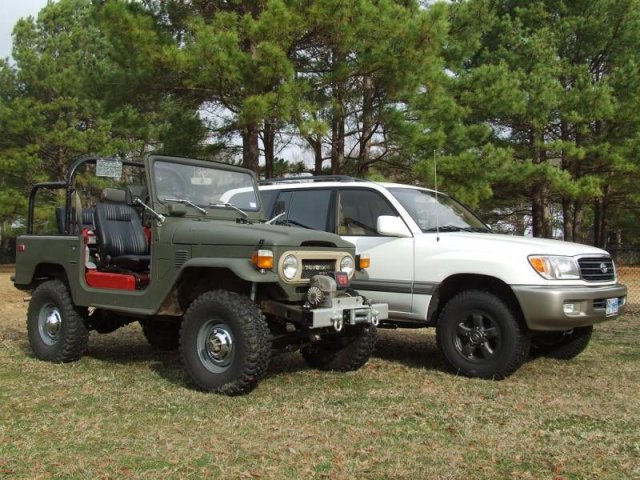 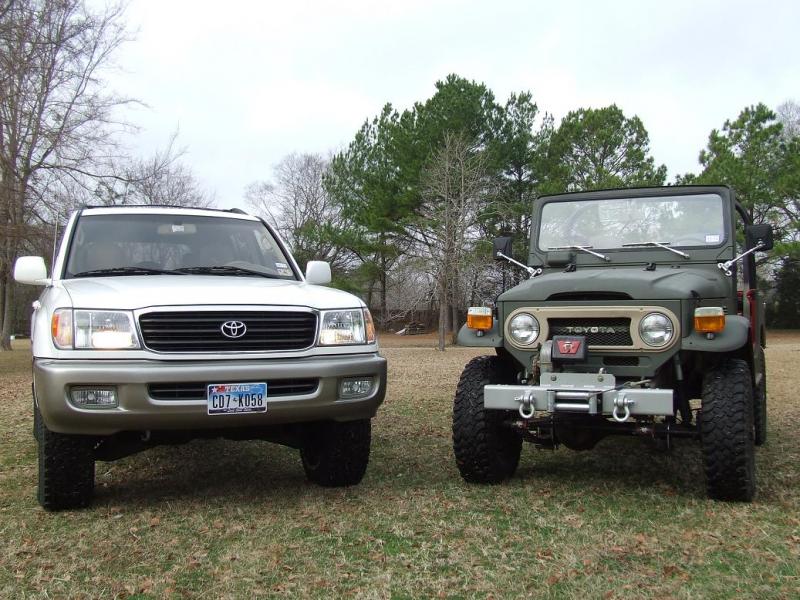 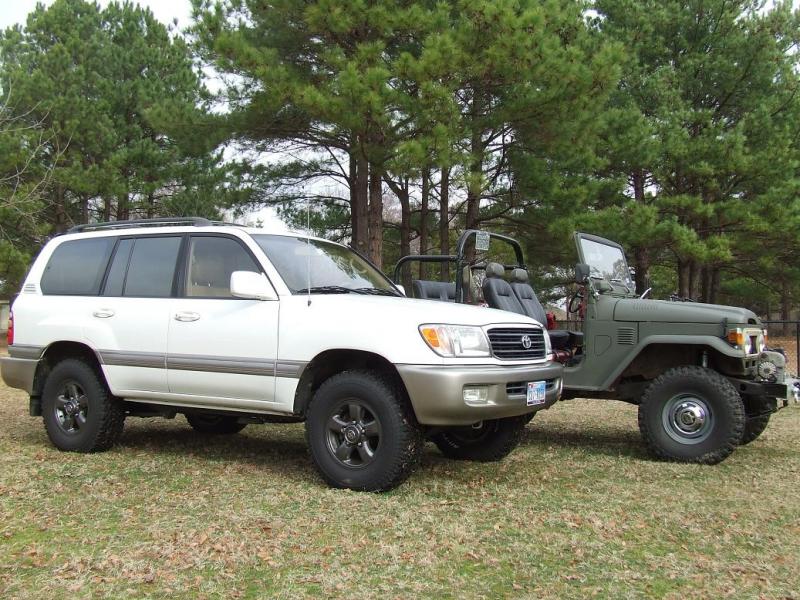 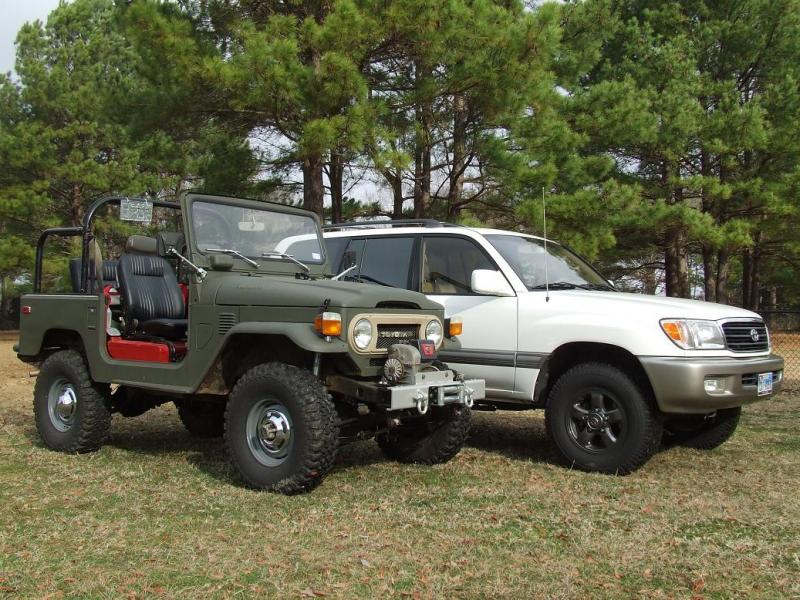 Looking good man! I love the way your wheels turned out, thats a nice color. Let us know how well it holds up.

farinvail said:
I had a 40 that same color scheme.
Click to expand...

. It is originally Freeborn Red. The olive drab is just keeping it from being an eyesore till I can paint it correctly.


TheFuzz said:
Let us know how well it holds up.
Click to expand...


I talked w/ yoter100 about this and he did his about a year and a half ago. He said it has been through sand, mud, snow and has held up well. I did mine the same way and it appears like it will be fairly tough.

I probably leveled/lifted my front end by about 2". Since my cv boots are now leaking, should I do the Slee diff lowering thing? Or will just new boots and clamps and grease do the trick?

I don't think my cv boots were actually damaged. I think when I cranked the torsion bars it changed the angle enough that it forced an amount of the lubricant to be pushed past the bands on the boots.

Wheel paint is holding up very well after 10 months. I am still happy with that decision.

I did go ahead and do the Slee Diff drop and I am very pleased. I am not sure mine needed it but I feel like it is an ounce of prevention. I have probably put 20k miles on it since the lift and diff drop. No more leakage.

LOVE that 40... thanks for posting the pics I have the same colour scheme on my cruiser and have been thinking about the graphite wheels for a while now.... my worry is that they make the wheels look very small in comparison to the large white body and are far more suited to the darker colour 100's

Looks great...both of them. I did my wheels in the same paint and they are getting pretty scratched up. I would hate to see what they would look like if they still had the OEM coating. Nice to know that a few hrs on a Saturday will fix them right back up.
2002 100
2005 LX

Thanks for the update, Cope. 20k miles in a year though? WTF do you do for a living?
-Fuzz

did you still have drop travel at your IFS .?
HJ-60 2H-TI Tencha
VDJ76L-RKMNYV - Cleopatra
Cruisers on my mind, blood and soul !
Join us at our local Panamá Off Road Forum
if you are achieveing the max boost then it isn't the boost that is going to kill your engine... it is your right foot.
B

TheFuzz said:
WTF do you do for a living?
Click to expand...


I am a construction contractor and have projects going all over the county. I think most of my miles are from my 16 year old son playing select baseball all over the state every weekend and when we are not playing baseball we are at the hunting lease working. it is 275 miles away.


Tapage said:
did you still have drop travel at your IFS .?
Click to expand...


It probably doesn't have the travel that it did have but I am not using it hard off road. I use it on ranch roads is about as hard as it gets wheeled. When I bought it, I was trying to get rid of the soccer mom look. I needed it to look like the world class off road rig that it is. I just couldn't cost justify the new TB's until I put some weight up there.


My TB's are not maxed out. YMMV. If yours are, it is not a huge problem, just search for "reindex torsion bars". You should come up with something. I read a lot on it just in case I had to do it. There is a lot of good info on MUD if you search.
When I first lifted it I did not do the diff drop. I was worried to death that it was going to tear my cv boots so I final just ordered the kit. It gives me great peace of mind knowing that my axles are running very close to factory instead of a more acute angle. Plus, if I ever do go to a 2.5" lift with new TB's I already have the diff drop in place. And yes, the spacers for the rear 80 are the same.

I guess I better update....

I just drive my LC and mostly use it like it was meant to be used. I have put 52,000 miles on it since purchase in Oct 2010. That is about 22,000 miles per year. This thing has been almost flawless. I have changed the oil and that is almost it. I put in all new front wheel bearings about 10k miles ago but that is because I had a local shop put new rotors on and I'm not sure they got everything back in correctly. It was just one side that started making a racket so I ordered all new bearings and seals and did both sides myself.

When I got it with 137k on the clock, it did have a sticker under the hood for the timing belt but it was not a Toyota sticker. So at 180k I started researching what all parts I needed to do the TB myself. I ended up ordering almost $1000 worth of OEM parts from Sam Stewart at Lowe Toyota. I wanted everything I touched under the hood to be new.

Here is a pic of all the old parts that came out: 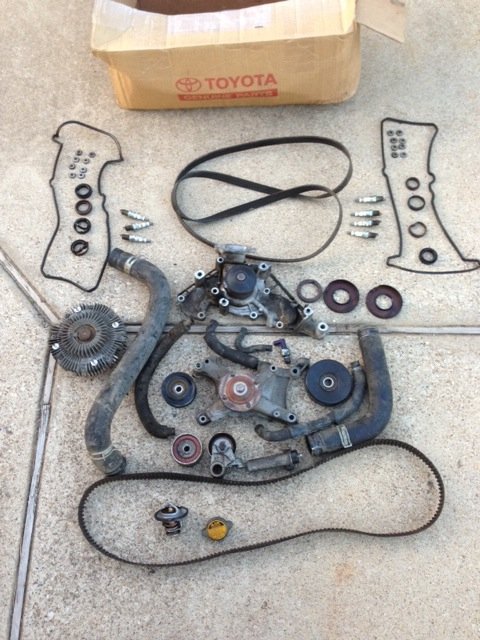 I think those spark plugs had a 190k on them. I ended up taking it to a mechanic that I really trusted to do as good a job as I would do if I had time. When he started replacing the valve cover gaskets and the seals and grommets that go on the valve covers, he called and asked if the plugs had ever been changed? I said not that I know of. He said he thought they were originals and that is what he put back in. NGK iridium.

I am ready for another 200k now 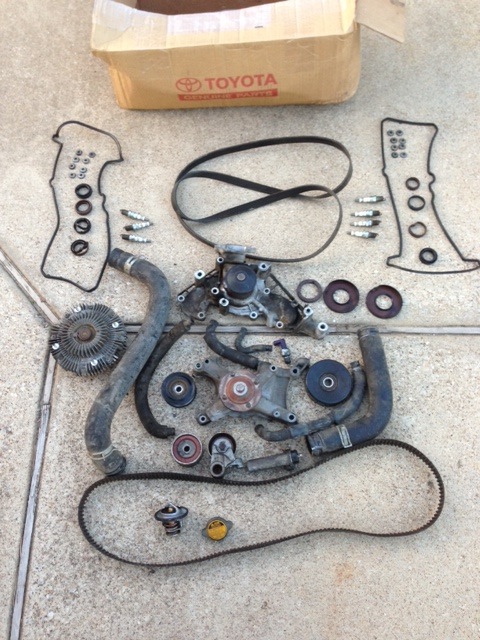 Replaced both front axles today with new OEM units. I have had a torn boot on my drivers side for about the last 10k miles or so. 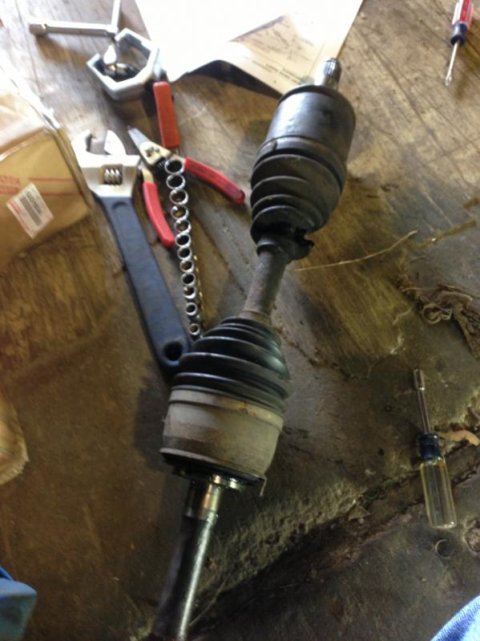 I knew it was torn 6 months ago but decided that the originals already had almost 200000 on them so I made a decision to replace instead of repair. Here is the two new ones.... 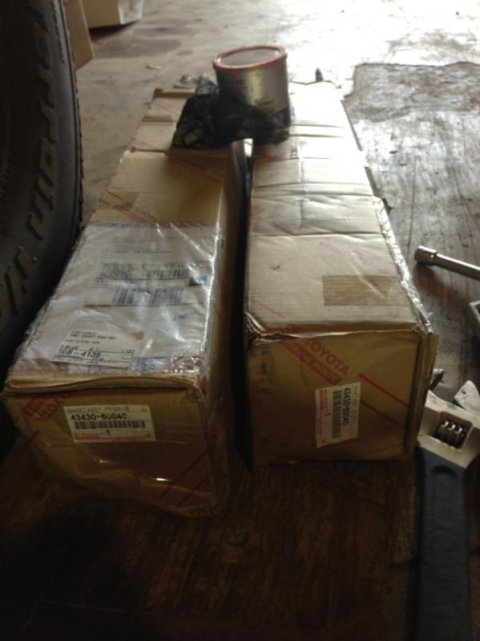 First side took about 1:45. The passenger side went in in about 50 minutes. Just figured out what we were doing on the second one I guess.
Here is a pic all buttoned back up.... 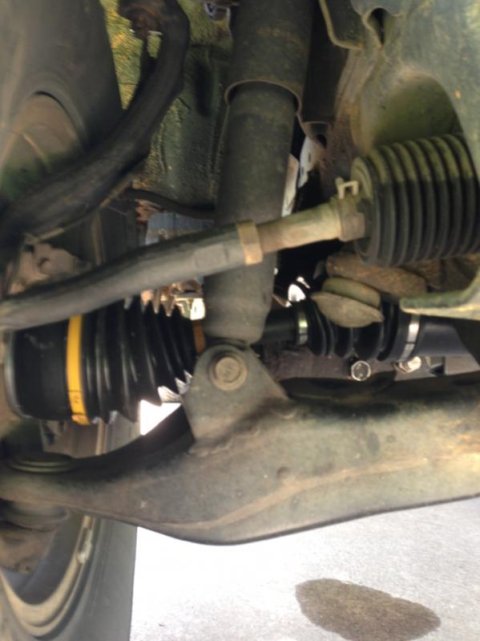 Sent from my iPhone using IH8MUD 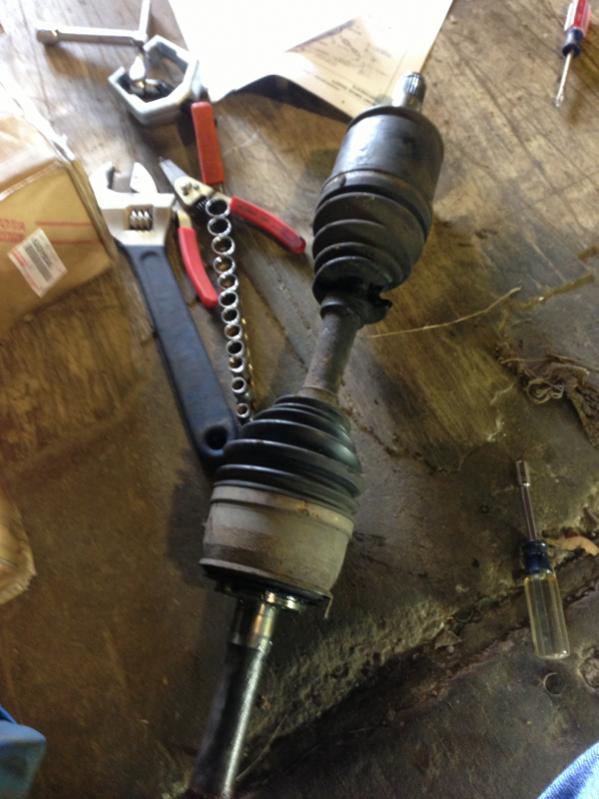 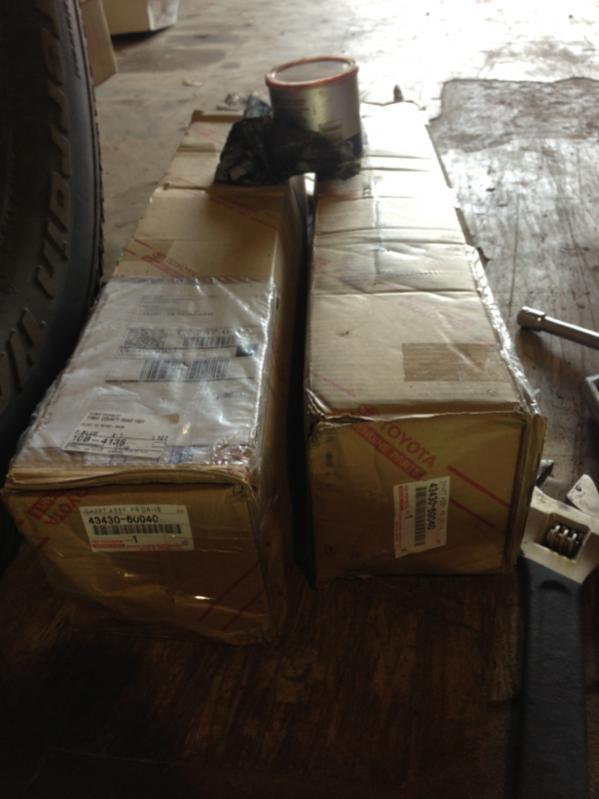 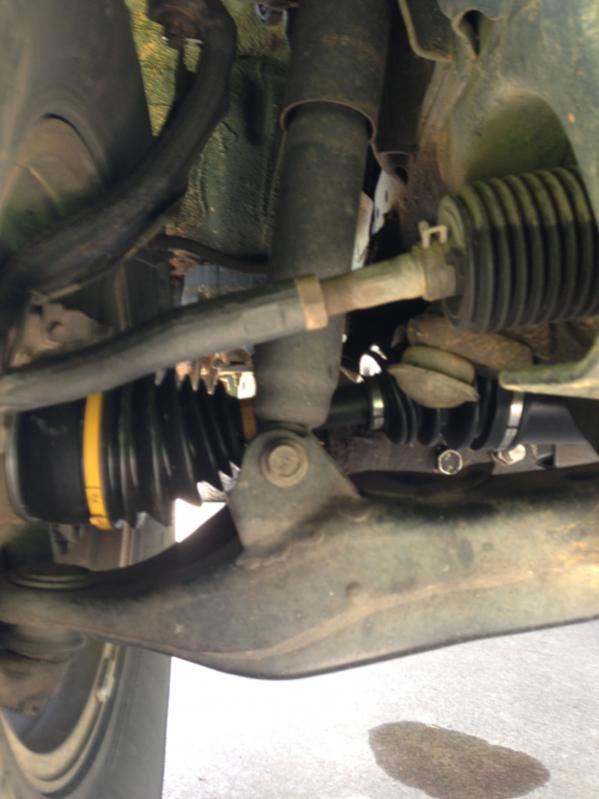 TRDdrew's build thread: lets build this one to keep
2