In general it’s a better value to me bc I don’t mind beating on it a bit and it getting trashed on hunting/road trips. I’m way too up tight about my cars to beat up an expensive beast like a 200.
2000 LX 470, AHC Disabled, Ironman Nitro Front Shocks and TB's, Dobinsons Progressive Rate Coils, Bilstein 5160 Rear Shocks, 285 Falkens, ARB Sahara Bumper, Slee Sliders, the rest is stock
2012 Tacoma 4door, TRD Pro, Allpro (RIP) Front and TCase/Exhaust Skid the rest is stock

I would love to get a 200, but for the price it’s not happening. I love my 100 and probably won’t get rid of it. I feel confident that I can work on it and since it’s not $60k+ I don’t feel bad about making a mistake here and there.
It really feels like a huge upgrade from the 92’ 80 that I used to drive 10 years ago.

I will say the wife doesn’t love it though. She prefers driving her VW Atlas which handles more like a car really. We don’t do enough off pavement yet so maybe that will change.

I've told this story before, but we bought a 100 series in 2016 when we moved to Colorado. We brought a 1989 FJ 62 and a 2005 Nissan Frontier 4x4 with us. Both great trucks, but at that point we had a 6 month old and the car seat didn't fit well in the Nissan and FJ62 wasn't a suitable daily for our needs. Coupled with the fact that 100s in the Hills (RIP) was now in our backyard, we picked up the 100 series. I bought my 100 off the forums from @torfab who had found one, fixed up for himself, and was moving it to do something different. It's been a great truck and it's an absolute looker. With HIH now done, I've been thinking more and more about moving on from the 100 - it's been a great truck, but it seems like OEM parts are starting to get harder to find / discontinued and I worry about long term support at this point. When/If it's time to move on, I'll be looking for a 200 (probably can't afford) or a GX460.
1989 FJ62 "Elsie Mae"
1998 UJZ100 Name TBD
J

Let me chime in here: I have 99 LX with 310k. Bought it in 2010 and it’s been my DD since. I’ve done a ton of work and PM to keep it riding/driving like new. I just recently bought a 2021 Ram Power Wagon. The new tuck has all the tech and is everything I’ve wanted in a vehicle. That being said, I’m having a hell of a time parting ways with my 100. So much so, that I’m contemplating selling the new truck. That has to say something about these vehicles.

clrussell said:
Honestly I told my gal if we end up with another kid we are getting a van

If I had the cash or means to finance a 200 I would for the ease of car seat installation and more power/bigger.
But here I am. 100 has been down for a few months but every time I get it in I momentarily forget about all it needs because it rides and drives like nothing else i've driven. Buy what you can afford and accommodate however necessary.
-1999 Hundy 306k in need of some lovin
-2001 Tundradaily, 285k 2wd and rust mods
-1984 FJ60: Father (landschooner)'s truck- begging for mercy
Gone 1994 4Runner ,2000 Hundy, 2000 Discovery II, 2000 ES300

Dollar per dollar the move from 100 to 200 as of today's market is absolutely not worth the upgrade IMO.

Having said that... that isn't the reason why I don't get a 200. It's because the 100 just has so much more character to me and still is very serviceable from a tech standpoint, its nimble, it doesn't feel heavy and has just enough power, since I don't tow much. I also fear the slow discontinuation of parts, but we have a lot of vendors looking after the 100 series, creating replacement parts as things start to fail. This is the backbone of the forum, you could say that about the 40 as well, parts seize to exist but there will always be someone willing to source or create replacements for vehicles like this.
2001 LC, 3x locked w/98 locked axle & front TJM air locker, ARB Dual compressor, ICON Stage 1 F/B, ARB Deluxe front bumper, Dissent rear bumper w/jerry can, Dissent aluminium skids, TT tailgate & control arm skids, OPOR Sliders, 2.5" lift, EMU Wings Glass L/R. Prinsu rack, Blue Sea Dual Batt setup and smitty winch. Builds - Savirc Aircruiser build

Roosevelt T said:
Only thing better about the 200 is the front suspension design.
Click to expand...

- Hit me up if you need Techstream access in Atlanta
- Link to Toyota/Lexus FSM's - Toyota/Lexus FSM - plz use search to look for your car's FSM - https://t.me/ToyotaFSM

is the NLA of parts really starting to be an issue with the 100 series? Luckily i haven't had to replace much since getting mine last year, but that worries me. My 22 year old 100 feels better than most modern cars to me

My 100 series was a great vehicle for me. I went to the 200 series as it was a better tow vehicle for my camper. The 200 is overall nicer more comfortable, more power with neat add on's like the Cool box

I also wanted the 200 series after seeing Kurt Williams race Monica for several years and it never let him down.

My daughter Sarah still has her 100 series going on 10 years now and it still works great.

If not, then the 100 series is a great vehicle

To me, the 200 series is the best Land Cruiser I have owned 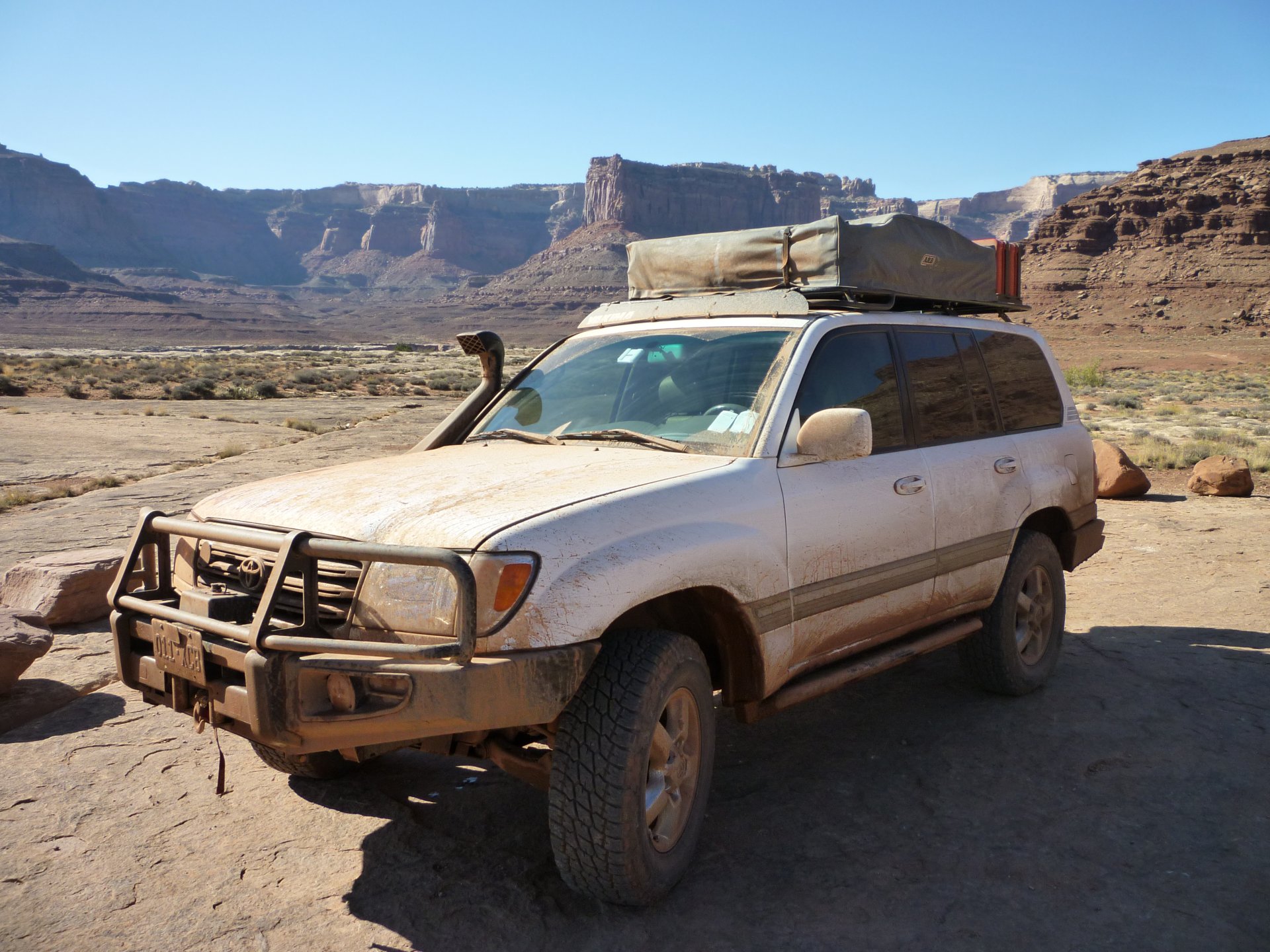 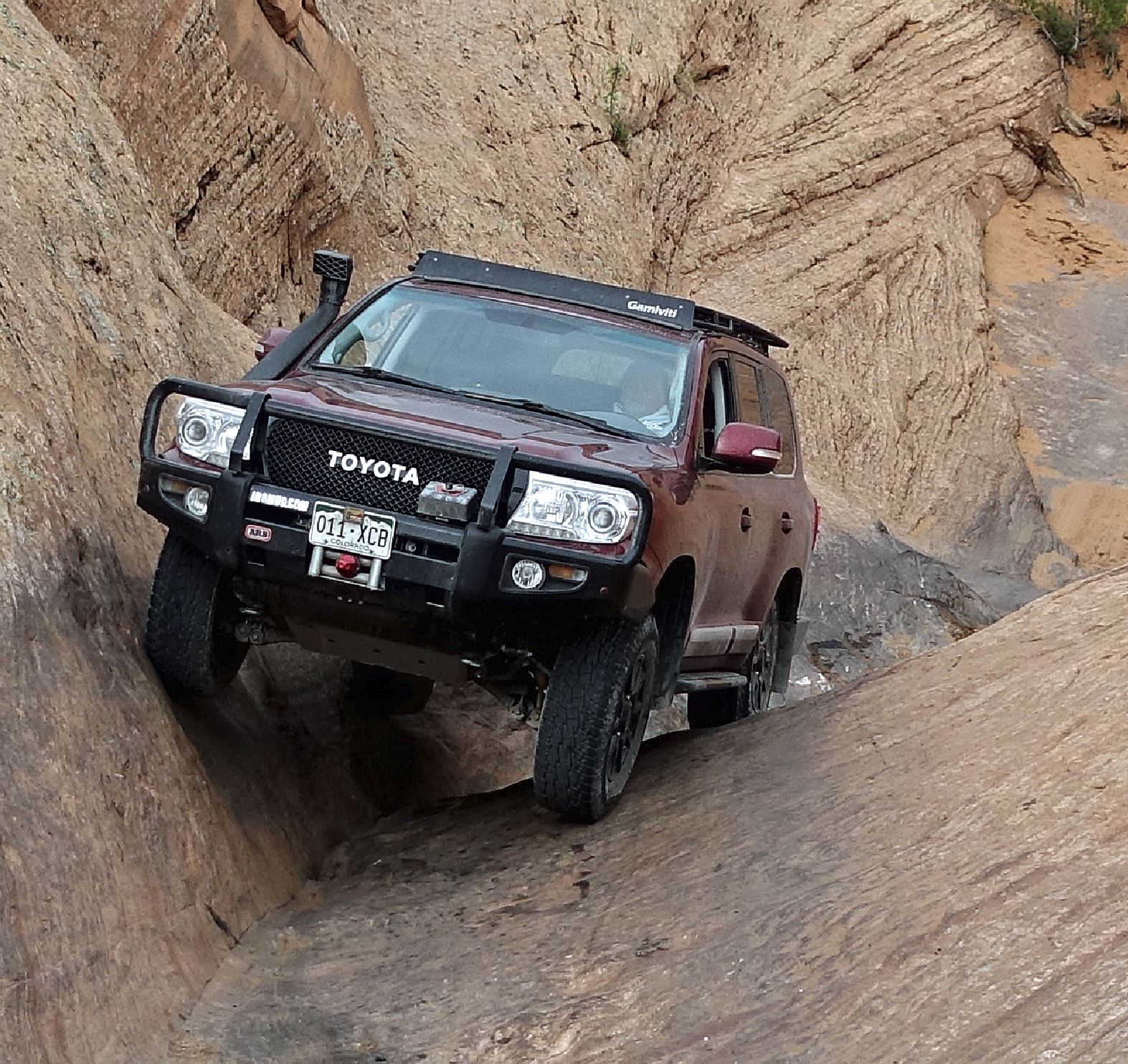 FJ60LC said:
is the NLA of parts really starting to be an issue with the 100 series? Luckily i haven't had to replace much since getting mine last year, but that worries me. My 22 year old 100 feels better than most modern cars to me
Click to expand...


Hopefully 3D printing can help with some of these scarcities

"And the days that I keep my gratitude higher than my expectations
Ah! Well, I have really good days." Mother Blues - Ray Wylie Hubbard

Sure, total external dimensions it's "only and inch or two" but it's just beefier in general. Was just looking at some 200s parked next to my LX yesterday and noticed for instance the hood is a good 3 inches taller and the beltline as well. The front of the headlights and grill come almost out as far as the bumper where on the 100 the bumper is much further out.

And it's approaching 800lbs heavier stock for stock which just means the 200 is going to need bigger tires and everything else further expanding the weight difference.
2007 LX470 Supercharged Super Cruiser
1996 Land Cruiser EVJ80 electric conversion

BnvS said:
C'mon that 5.7l gas guzzler is not too bad. Also KDDS is not bad either. A little complicated but I think it works as keeping the suv planted when necessary and not when necessary.
Click to expand...

KDSS is totally unnecessary, IMO. Yeah I'd take a 5.7 if it was in my 100 from the factory but I'm loaded up with a heavy truck and never care for more power. Better gas mileage on the other hand... But the 5.7 / 200 wouldn't get me that.

Why is half my gas tank cover colored like this?