Where have you mounted your Hi-Lift Jack?

So, for the many years before I actually bought an 80, I looked at other people's and formulated all sorts of ideas about how I would want mine to look and about functionality. I finally bought one (see owner's registry thread) which I chose specifically because it was already modded almost exactly how I would have done it if I had started from scratch (except I would have insisted on better workmanship).
With one major difference:
I've always told myself that I would never have an exterior mount for my hi-lift jack because of dust, mud, rain (rust), etc. I want my jack to be protected from the elements and to be confident it's not going to stick or jam at a crucial moment. They're bloody dangerous to use, and I want to make sure it's well-kept and maintained. UNFORTUNATELY, it's too tall to stand up vertically in the boot (trunk) near the door AND I don't want it pushed up right behind the rear seat - If I need it and I'm fully loaded in the back, I don't want to have to unpack EVERYTHING to access it.

What other options are there? my old man's got his mounted on the side of his roof-rack above the door, but it rattles a lot, which bothers me. Mine is currently mounted on top of the main bulk of my ARB bullbar, but it's obviously exposed to lots of dust and rust there.

Do I just get a waterproof canvas cover made and leave it where it is? I'm curious to know what other members have done.

Tie it down with the rearmost tie downs under the rear carpet mat or a rolled up blanket. This won't affect daily grocery getting duties negatively. Have an exterior mount available for big trips or when cargo space is an issue. Keep some silicone spray in the truck and lube it every so often if you are worried about the affects of an exterior mount. With lube, the jack should be reliable.

I always use the blanket because it stops any rattles and with the excess blanket I will cover the cargo area in case of any spills to keep the carpet clean.

TioChachie said:
I always use the blanket because it stops any rattles and with the excess blanket I will cover the cargo area in case of any spills to keep the carpet clean.
Click to expand...

Good plan. Might just end up doing that.
There is a good canvas place near where I live and I know they can make quality waterproof covers for the exterior mount. Blanket option is obviously cheaper!

Mine's on the roof with Quickfist clamps. No issues so far.

Hilift makes a neoprene cover for the jack assembly. Mine has faired ok ~ $20

robertaleon said:
Hilift makes a neoprene cover for the jack assembly. Mine has faired ok ~ $20
Click to expand...

D'you have a photo? Did you buy it online? Link?
B

I let others carry them for me.

IMHO these jacks are way too heavy for a Quickfist clamp to safely hold in an accident. It might be fine in traffic or on the trail, but in a freeway accident there is no way a Quickfist will prevent it from becoming a lethal missile.

bicycleagent003 said:
IMHO these jacks are way too heavy for a Quickfist clamp to safely hold in an accident. It might be fine in traffic or on the trail, but in a freeway accident there is no way a Quickfist will prevent it from becoming a lethal missile.
Click to expand...

I'm with you. I drilled two holes in my bumper and mounted allthread to it to hit the holes on the jack. Then just threded two nuts on them after sliding the jack on. Drilled a hole in each peace of allthread just above the retaining nuts. One has a clip other has a cable lock through the hole so nuts can't back off.. Been on there for two years now. 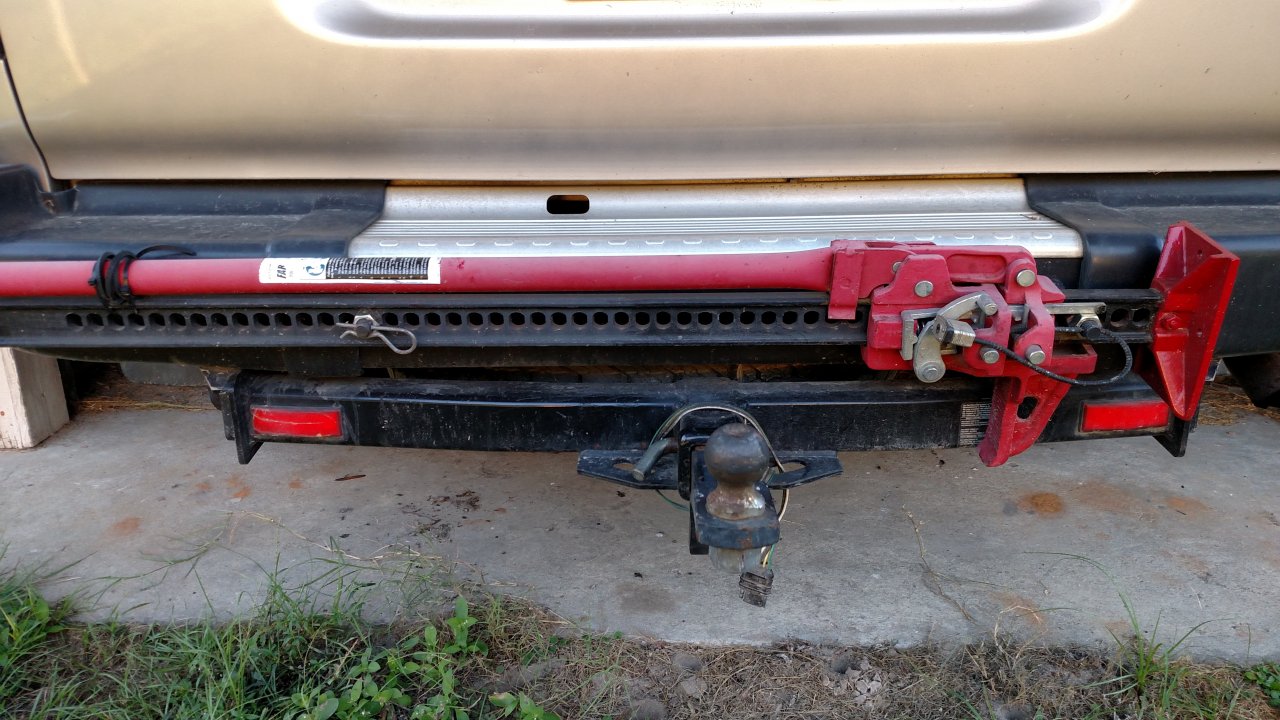 Mine is only on when I am heading to the woods. Easy to get to on the inside of the MT bumper stinger. You can see the neoprene "boot" that covers the mechanism from mud. Keep it oiled and it can be outside, no rust issues. 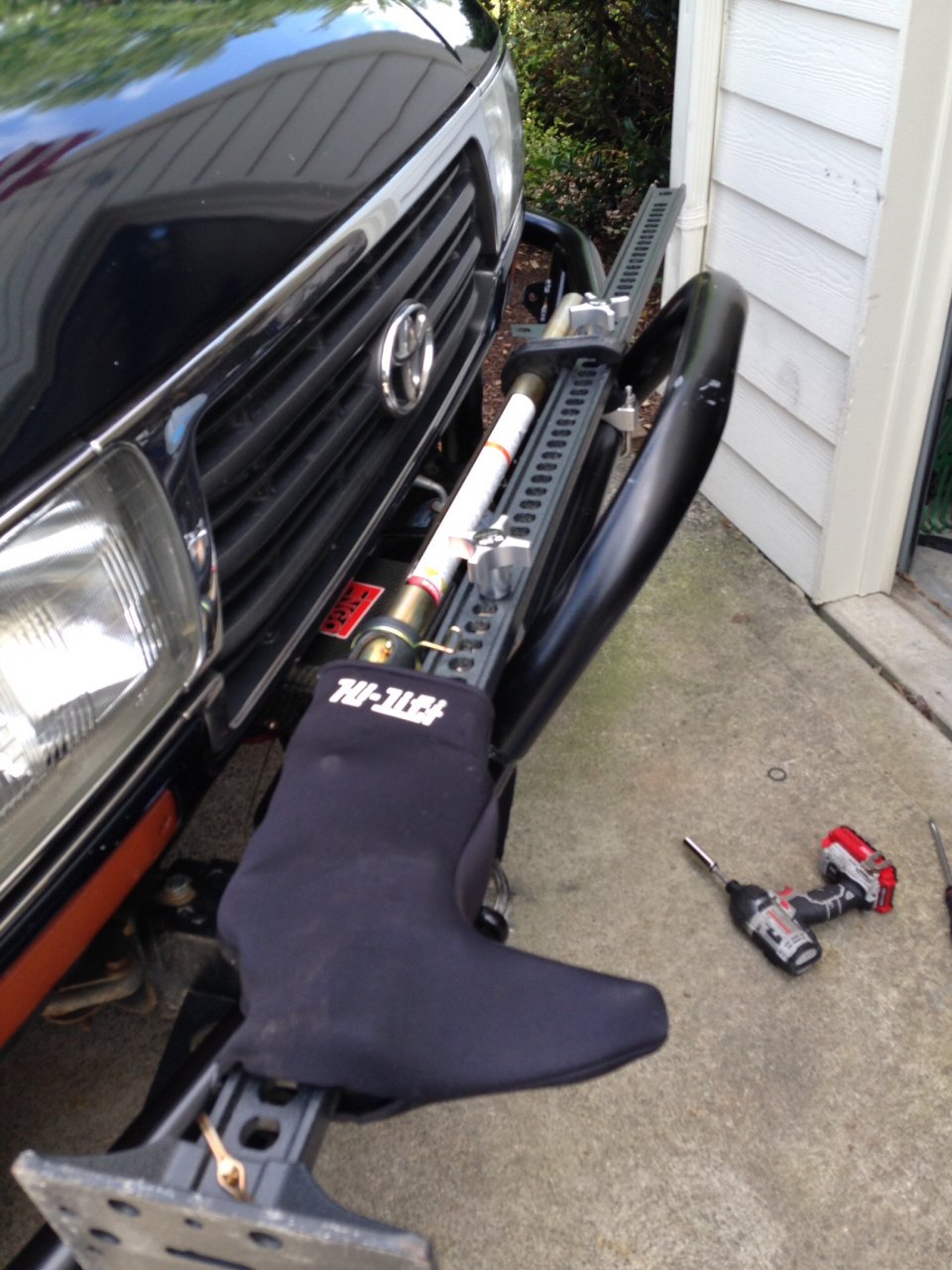 On the front using hilift mounting brackets. Only gets put on when heading out. Clean it and oiled whenever I get back.

bicycleagent003 said:
IMHO these jacks are way too heavy for a Quickfist clamp to safely hold in an accident. It might be fine in traffic or on the trail, but in a freeway accident there is no way a Quickfist will prevent it from becoming a lethal missile.
Click to expand...

Any opinion on whether bolts through the Yakima Q19 or whatever clamps, then through the hi-lift on a factory roof rack would be enough to hold it in a similar situation? My gut is telling me no but it may be my OCD shining through..

I use to have mine on a custom mount of my ConFer rack mounted over the hatch. It was a perfect location I felt. Out of the way, centered, but heavy. Never an issue and zip ties were all that was needed to keep it quiet. Now it's mounted behind my tire on my IPOR bumper. Still a good location. I squirt it once a year with silicone spray and use it when it's needed. Zero issues.

I would recommend against keeping them on the front bumper. The ARB is already unfriendly to pedestrians, and the Hi-Lift could seriously injure or kill someone (possibly you!) if it takes to the air. I think that a rear mount is the most feasible option - I don't see much reason to keep them on the roof rack. And if you want a cheap solution for a jack that never gets used, you can choose the college kid solution - spray it down with silicone and wrap it in saran wrap.

Location
Valley of the Dirt People, So Cal

I have mine mounted on my Yakima roof rack. I have the neoprene cover, which I remove from time to time and oil, spray with WD40 and then recover. It's on the passenger side so I can safely access it on the side of a busy highway. This is actually the second vehicle it's been on, and to date it's never been it issue. Its on my PM list.

My shovel and ax are on the other side. I keep the metal parts painted and lightly oiled, but the handles get severely weathered and break. Even really good ones do and cost as much as the the jack. THAT is more of what I'd like to hear about. I just took them down yesterday and have plane to lightly sand them, and either rub on, or spray on some kind of protection.

I have an IPOR rear bumper with an attachment for mine on the ladder swing out. I have had it on the side of my full size Wilderness Roof rack but it seemed to be an invite for potential crooks. I have since moved it to the inside of the roof rack with the same mounting hardware, very secure and somewhat out of site...

Tung oil or linseed oil has always served me well for exposed exterior wooden handles. Linseed works well on the exposed metal but I would NOT put the linseed in the moving parts of a hi-lift.

I spray down rust prone items like jacks with LPS. Good stuff.

To add to my previous post, I agree with most comments. The jack is extremely useful, and can dangerous at times if misused. Besides mounting when you go on trails (I don't put it out on the road, leave at home otherwise) where you can get to it easily when you need it, I would recommend taking any classes on its proper use for lifting, recovery, winching. I have taken them at various venues (Expo, American Adventurer, etc), and it is a great tool and can get you out of a bind in a jiffy, needs minimum maintenance.
You must log in or register to reply here.
Share:
Facebook Twitter Reddit Pinterest Tumblr WhatsApp Email Link