Did some cosmetic work on my rear leather seats. Over all seats are in decent condition but had some areas of fading and wrinkling that were deep and starting to wear away some of the color. I only focused on the wrinkles and areas well worn where the leather dye was missing off from constant rubbing. I found some products that can patch and fill these areas as well as some leather dye, that is very, very close. From what I've read, over the course of the next month or so the color darkens slightly which should make it a great match! Loving the new look so far and having it not showing its actual age like before!
Sorry I don't have any true before photos. The white stuff is the leather filler which looks and feels just like the leather once it's all said and done.

This is the company I used to locate color by sending them the info (color codes) found on my door tag.
Seat Doctors Mobile Vinyl and Leather Seat Repair 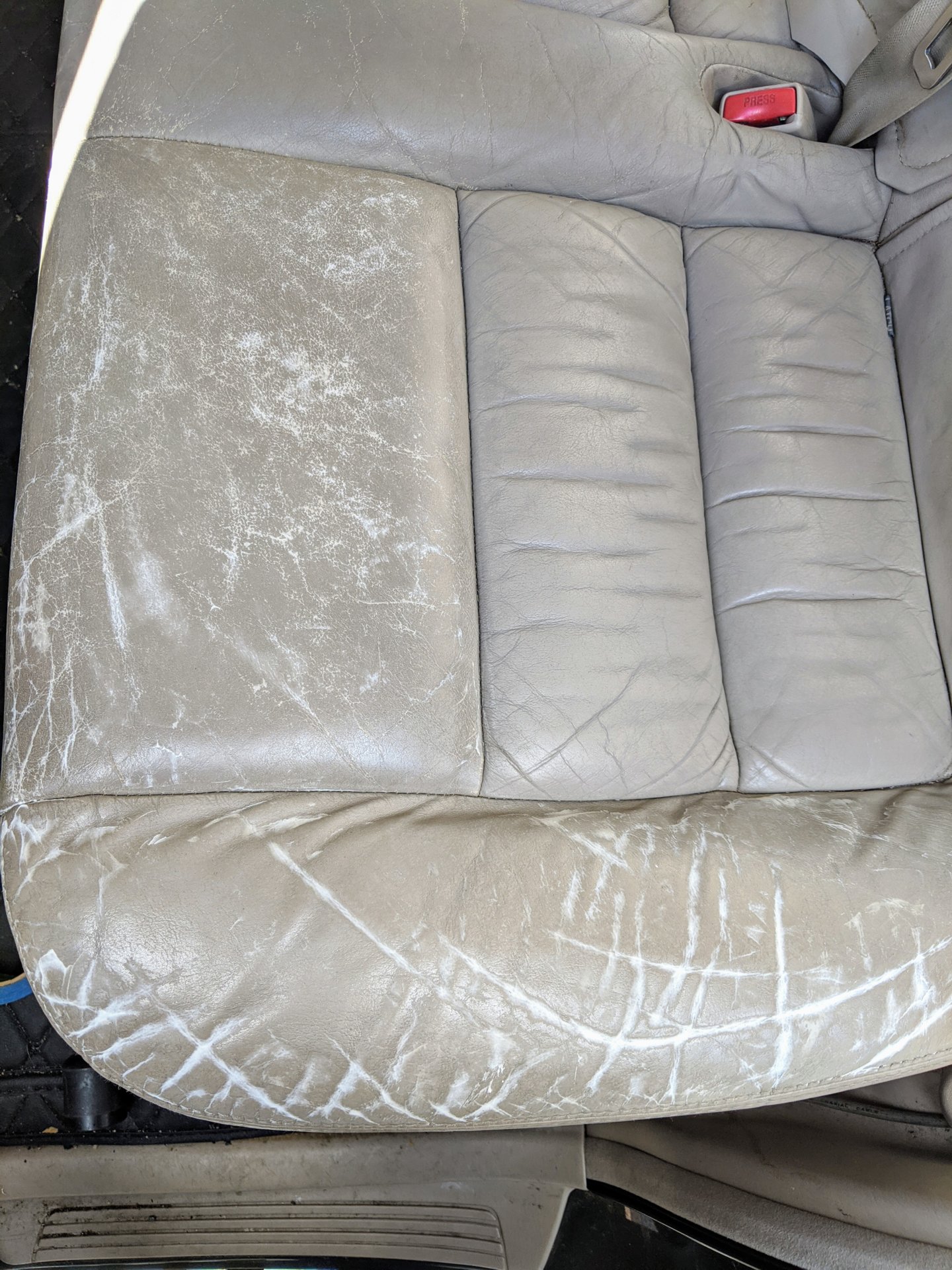 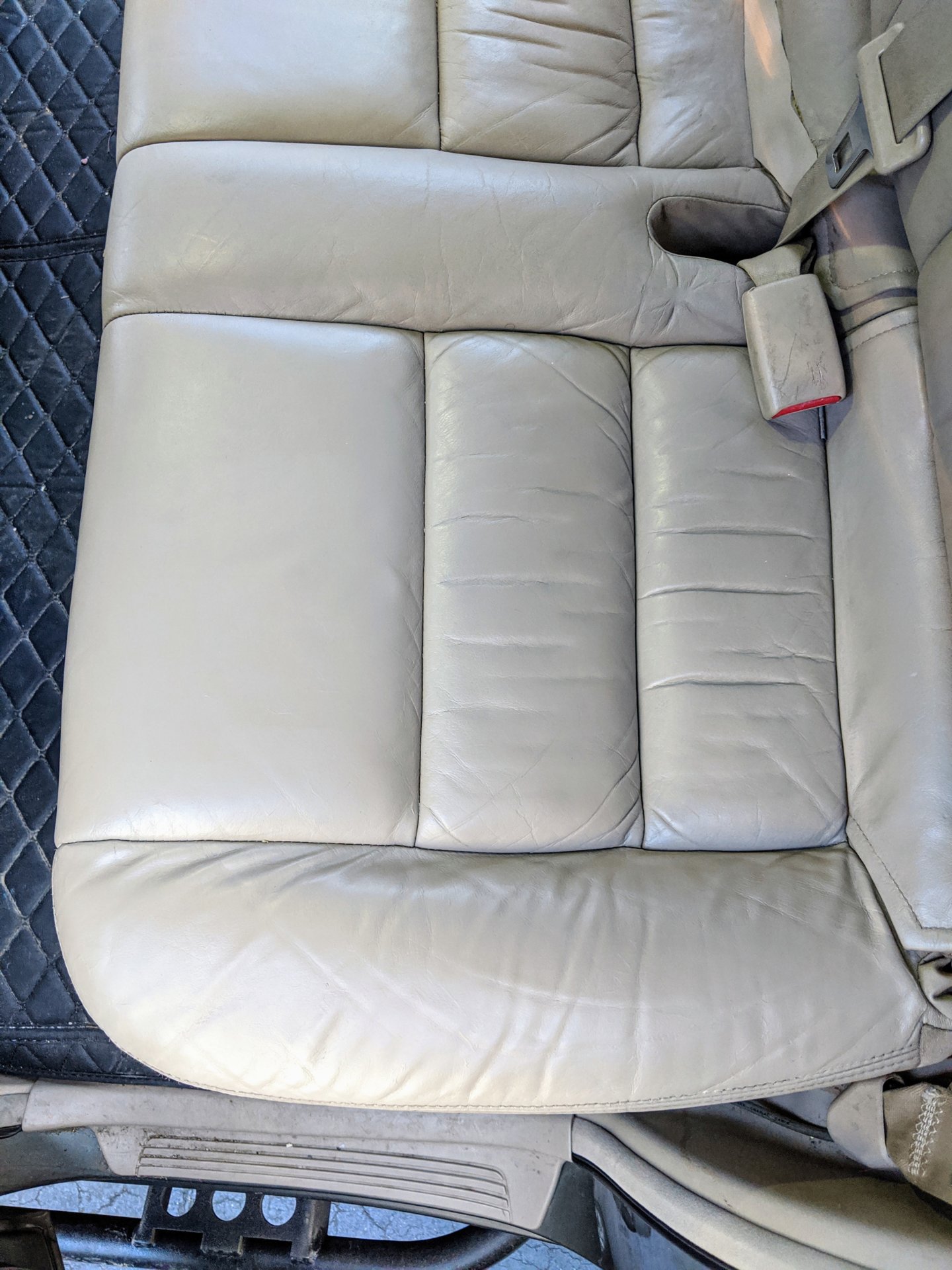 up5799 said:
Looks great where did you get the steel hubs?
Click to expand...

The wheels are Toyota P/N 42611-60D30. 16x6, 0 offset. Got them from Cruiserparts--ROW 70 series takeoffs. Pretty sure they sold the small stock they had, though.
In case you were actually curious about the hubs themselves, those are the same ones we all have--most folks have theirs covered.

What are your thoughts on those Diode Dynamics lights? I'm looking at new options for my bumper lighting and considering the DD or Baja

geanes said:
What are your thoughts on those Diode Dynamics lights? I'm looking at new options for my bumper lighting and considering the DD or Baja
Click to expand...

Dibs on your current Lumiteks if you upgrade!

Picked up used front seats for $380 from a wrecker, mine are trashed. I’ll post some more pics when I trade them out.

what is the best way to clean leather and condition it? (Put the lotion on the leather 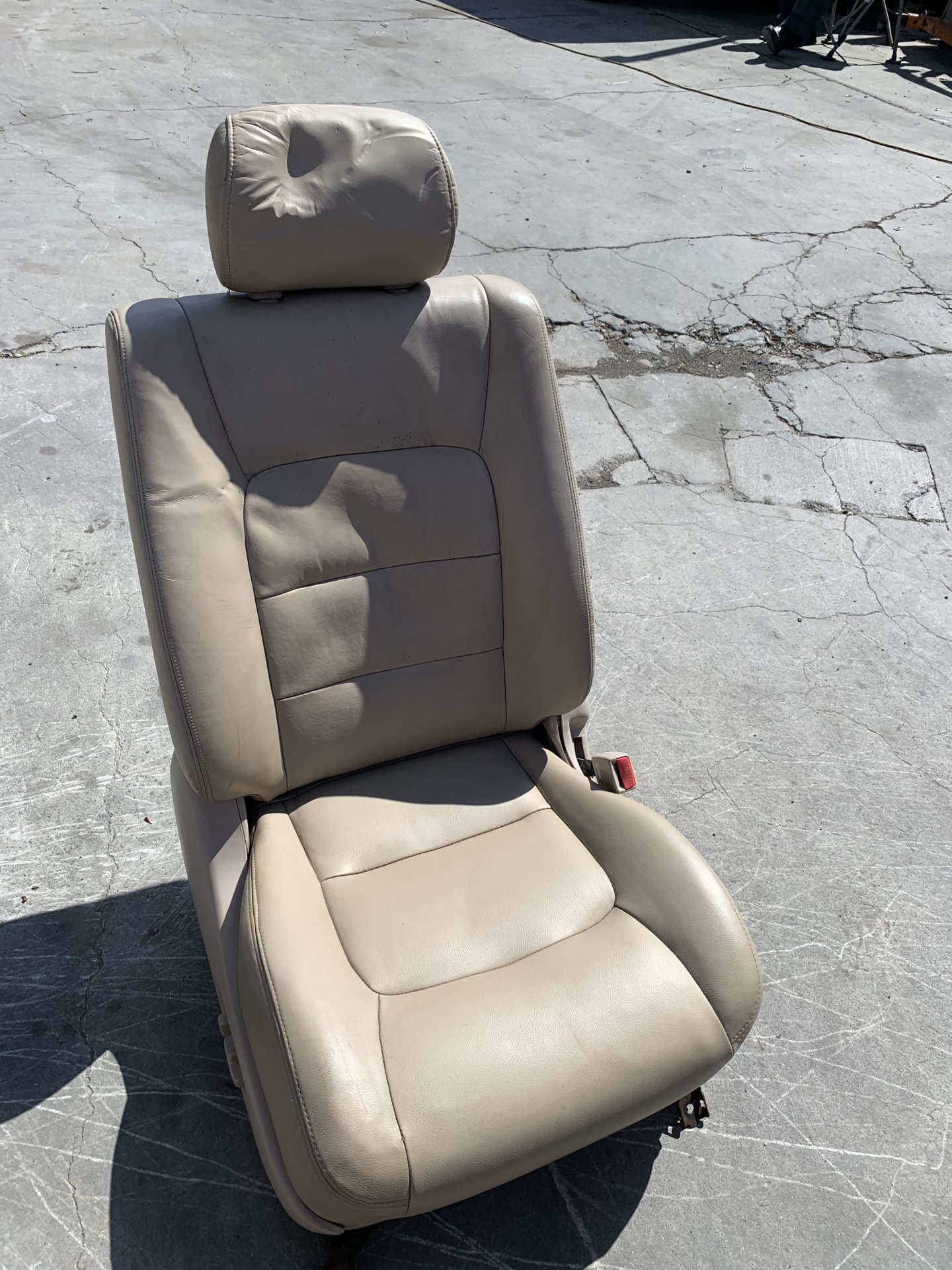 Did you cut this yourself, or buy a prepared piece? I’ve been considering doing this since I bought my white LX a year ago.

All new rotors. Powerstop. Replaced the pads with OEM. Also replaced the rear driveshaft searching for the drive/reverse clunk. @geanes great suggestion. So much easier to replace the whole thing. my tech didn’t even remove the skid plates.

It helped, but it still clunks. I’m thinking to check the diff bushing next. No real pictures. 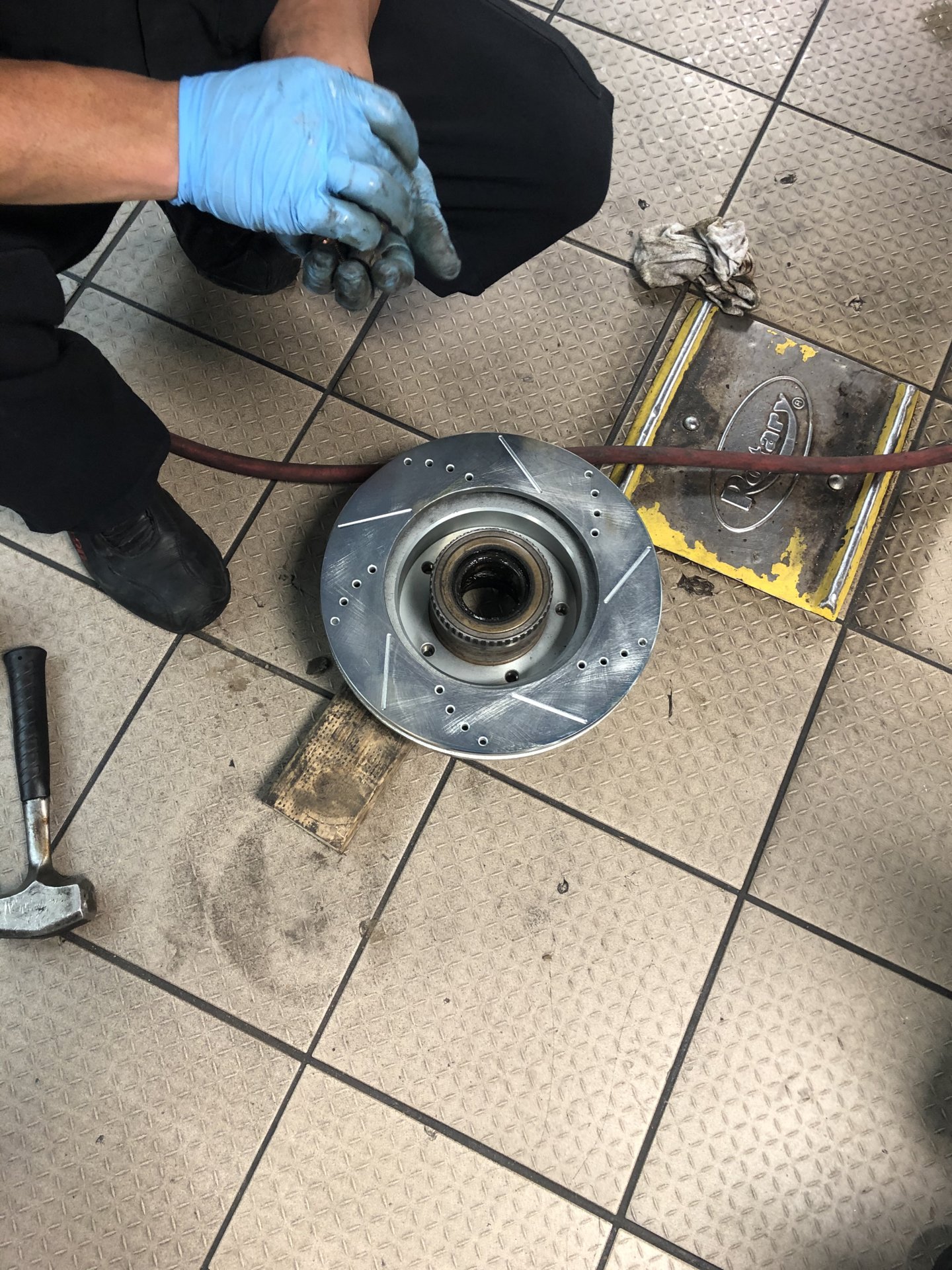 What a terrible situation - we know firsthand the damage salt water can do to a vehicle. Glad you and your truck made it out OK.

Florida might not have much mud but I found quicksand and saltwater. Thank goodness the tide was still going out. A good friend with a skid steer cane and rescued us. We almost winched out but the connection to the battery got so hot it it melted. So happy to make it home. Does anyone in here have a wheel winch? I guess I blew a relay. No headlights, blinker or radio but my running lights and brights work. She’s all cleaned up now and has slight PTSD from me driving

Blake100 said:
Back from the body shop thinking there was NO way we could get the paint to come back to life. The body shop owner and I were both surprised how good it turned out.

- Grille painted in high gloss and satin black
- Micro sanded to bring the sun faded paint back to black
- Was able to get the sun baked pin stripes off!

This truck is gorgeous 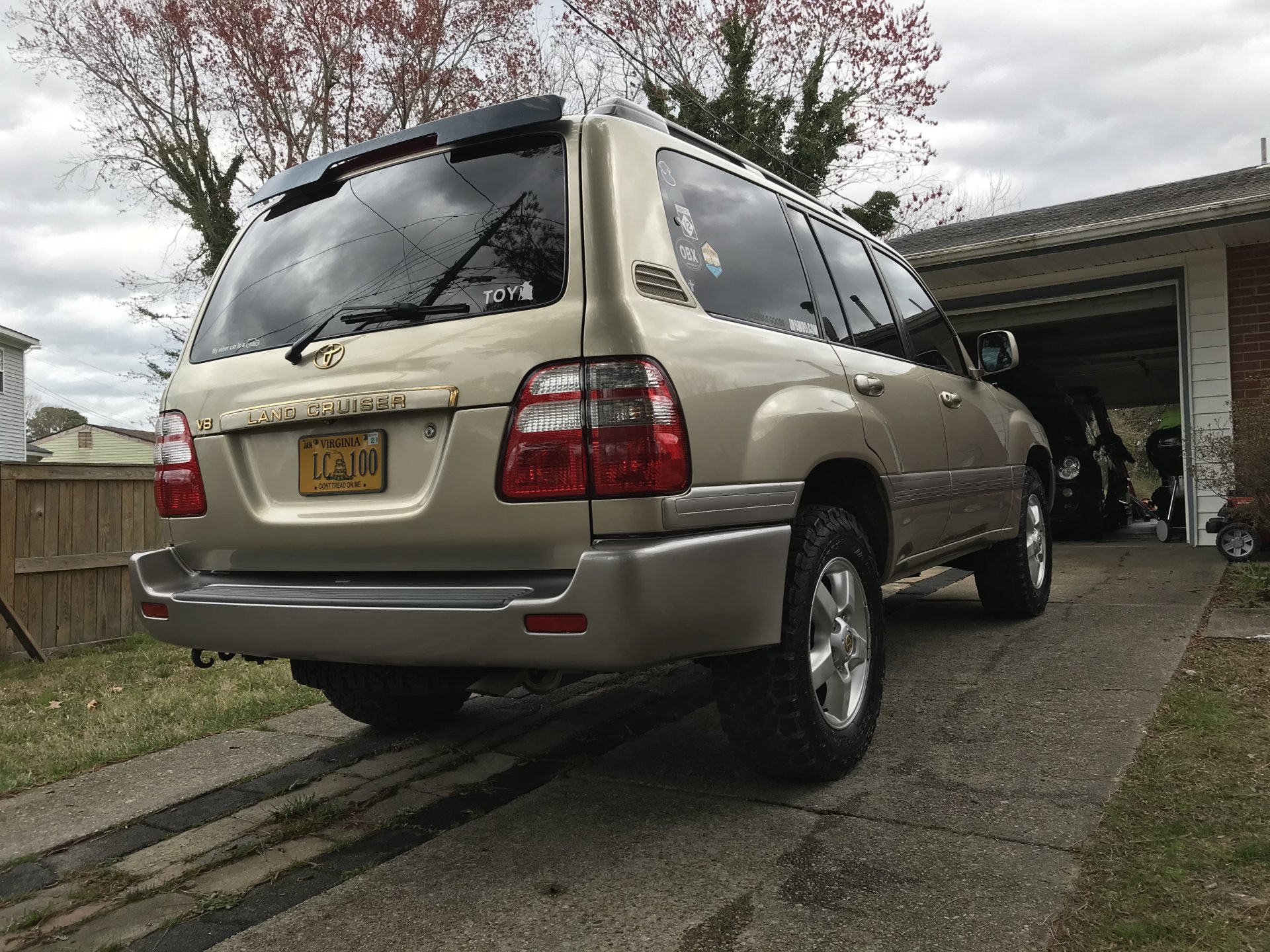 Used roof box for the snowboards 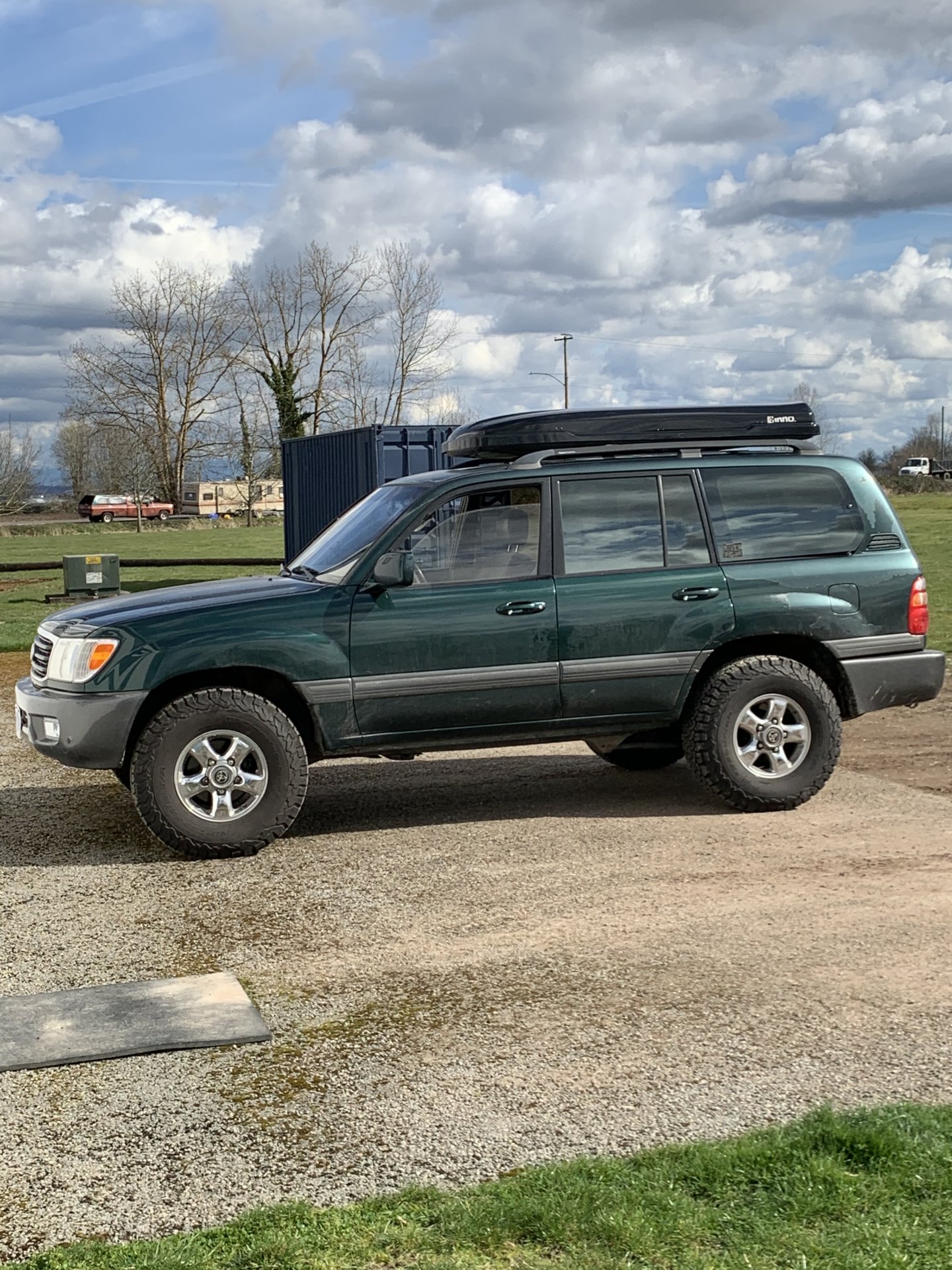 brando1 said:
All new rotors. Powerstop. Replaced the pads with OEM. Also replaced the rear driveshaft searching for the drive/reverse clunk. @geanes great suggestion. So much easier to replace the whole thing. my tech didn’t even remove the skid plates.

It helped, but it still clunks. I’m thinking to check the diff bushing next. No real pictures. View attachment 2228306
Click to expand...

Have a look at your engine mounts and the transfer case mount. The later sorted my last contribution to clunk after I attended to usual driveshaft work.

I had to replace my hood struts again this evening. The last pair I put on were StrongArm but they only lasted 2.5 years. I was hoping for better results.

I decided to save $15 and went with some Chinese made struts with good reviews on Amazon. Hopefully they last longer than 2.5 years. But at $20 for the pair, I won't complain if they only go 2 years. 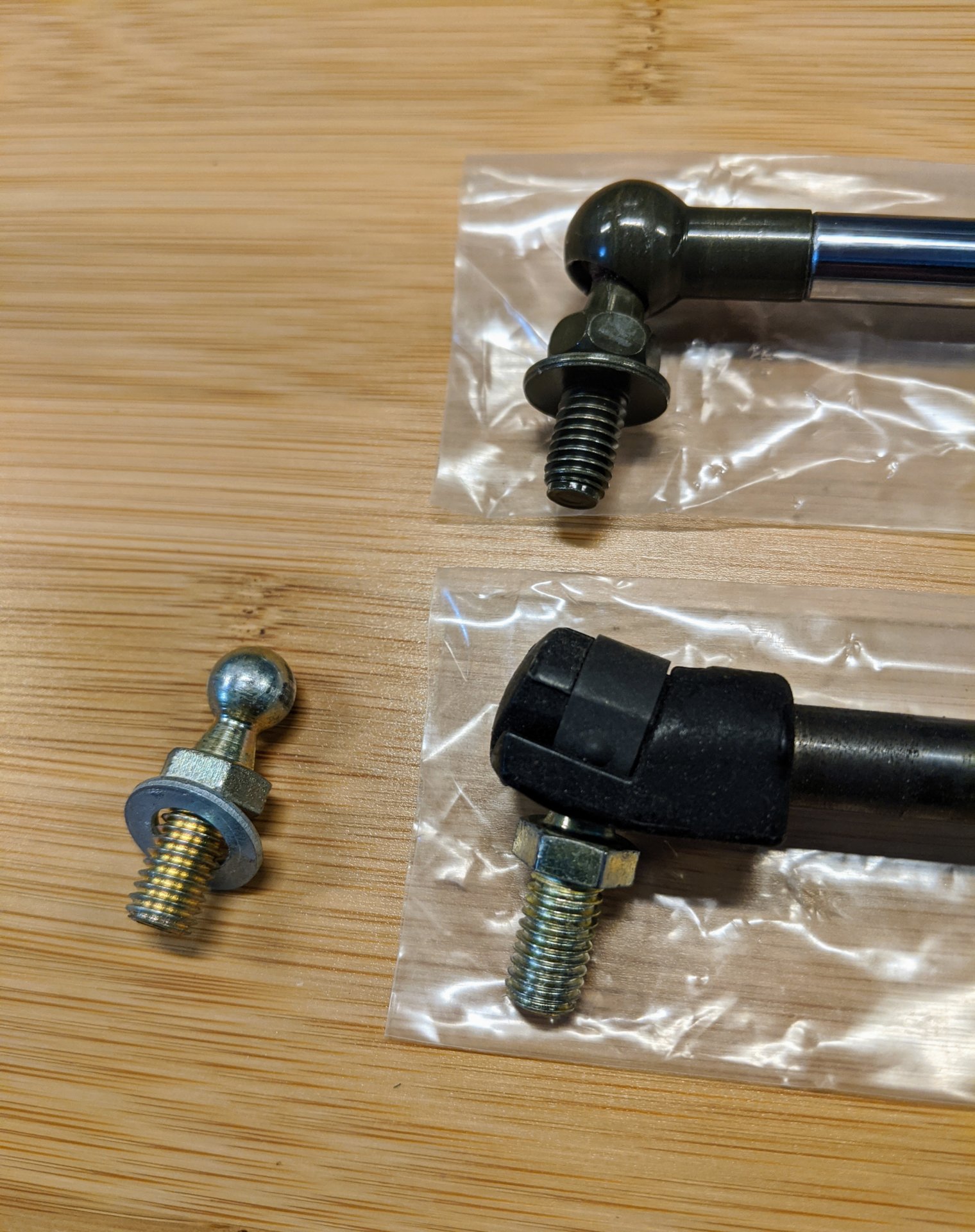 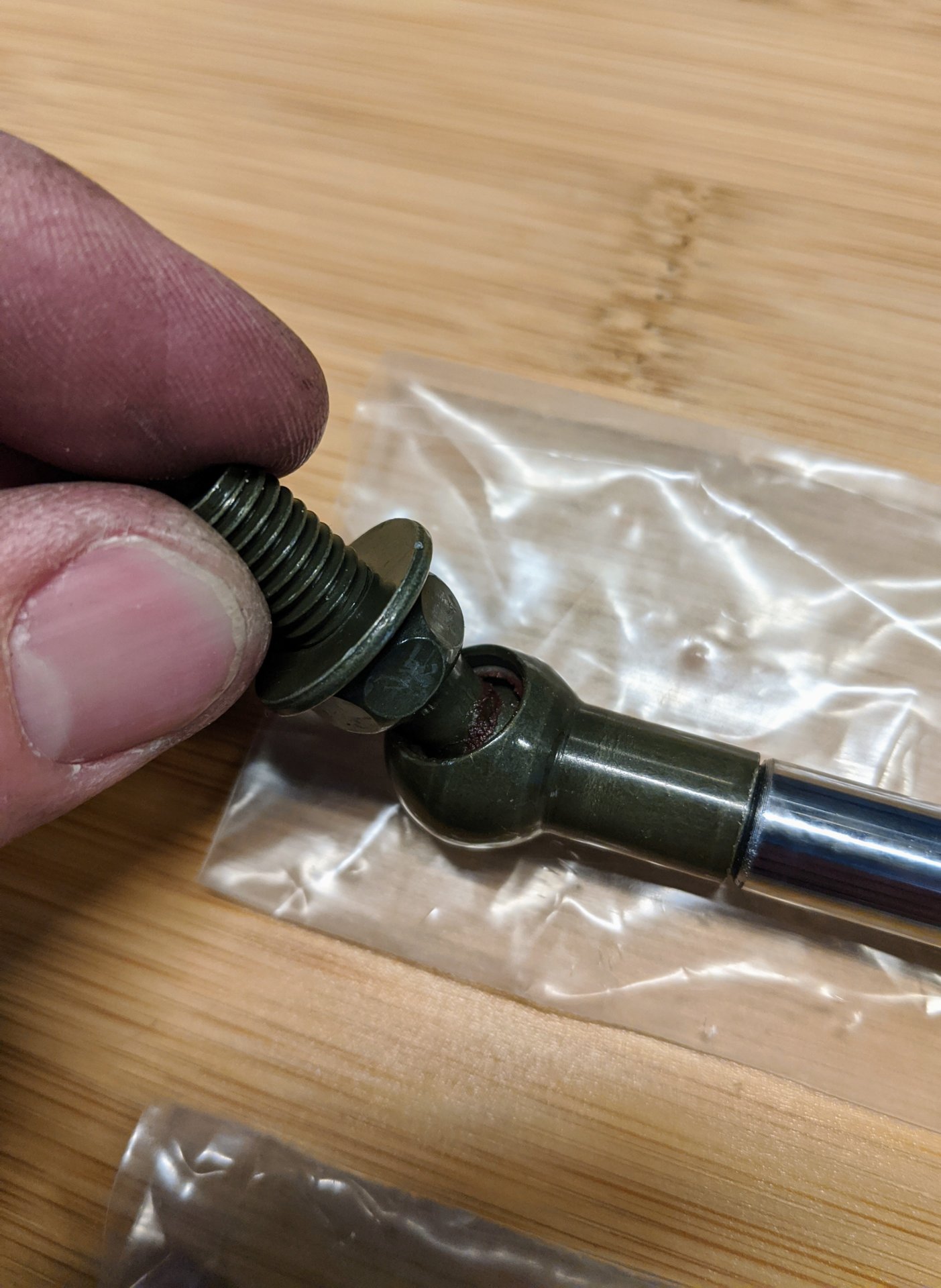 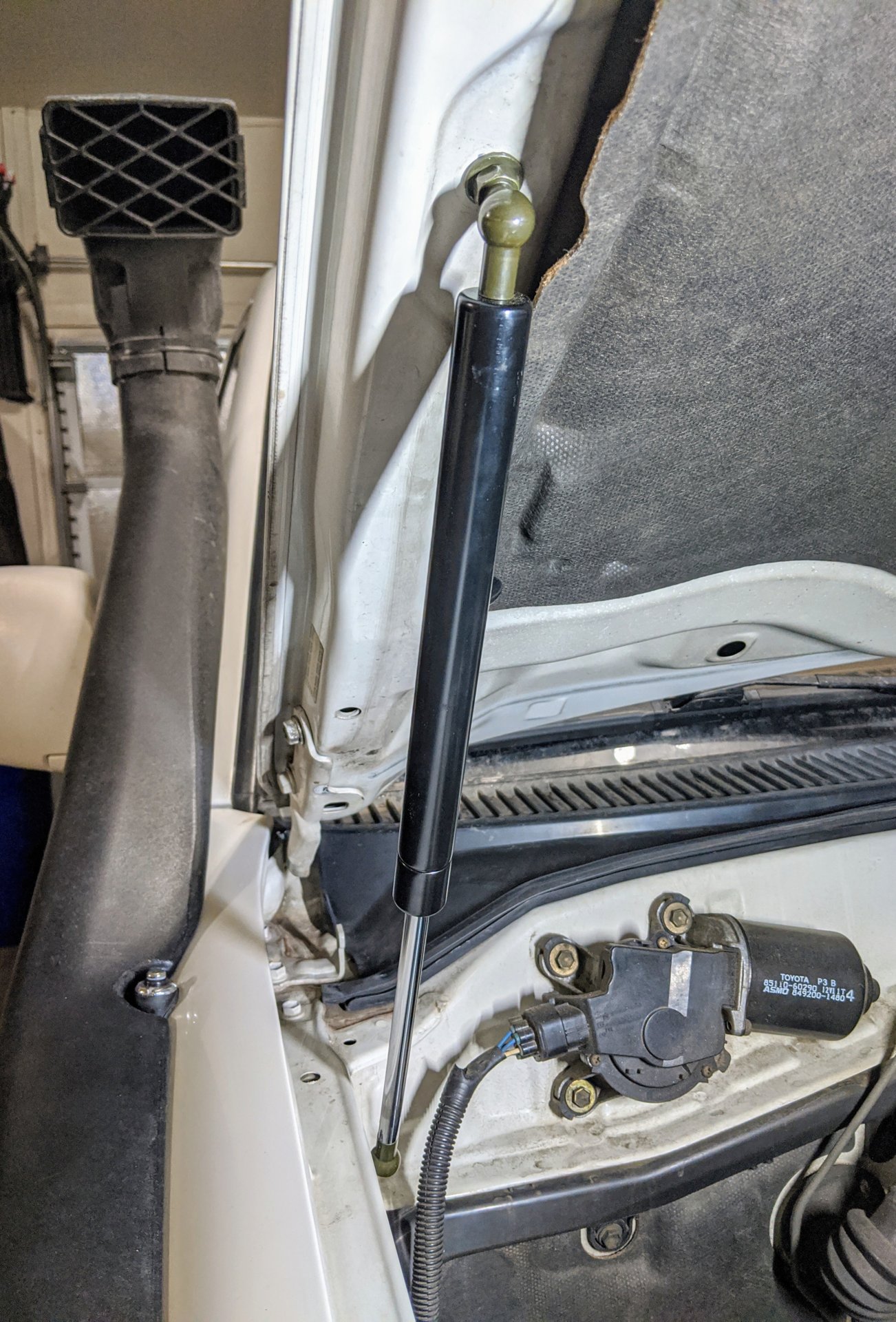 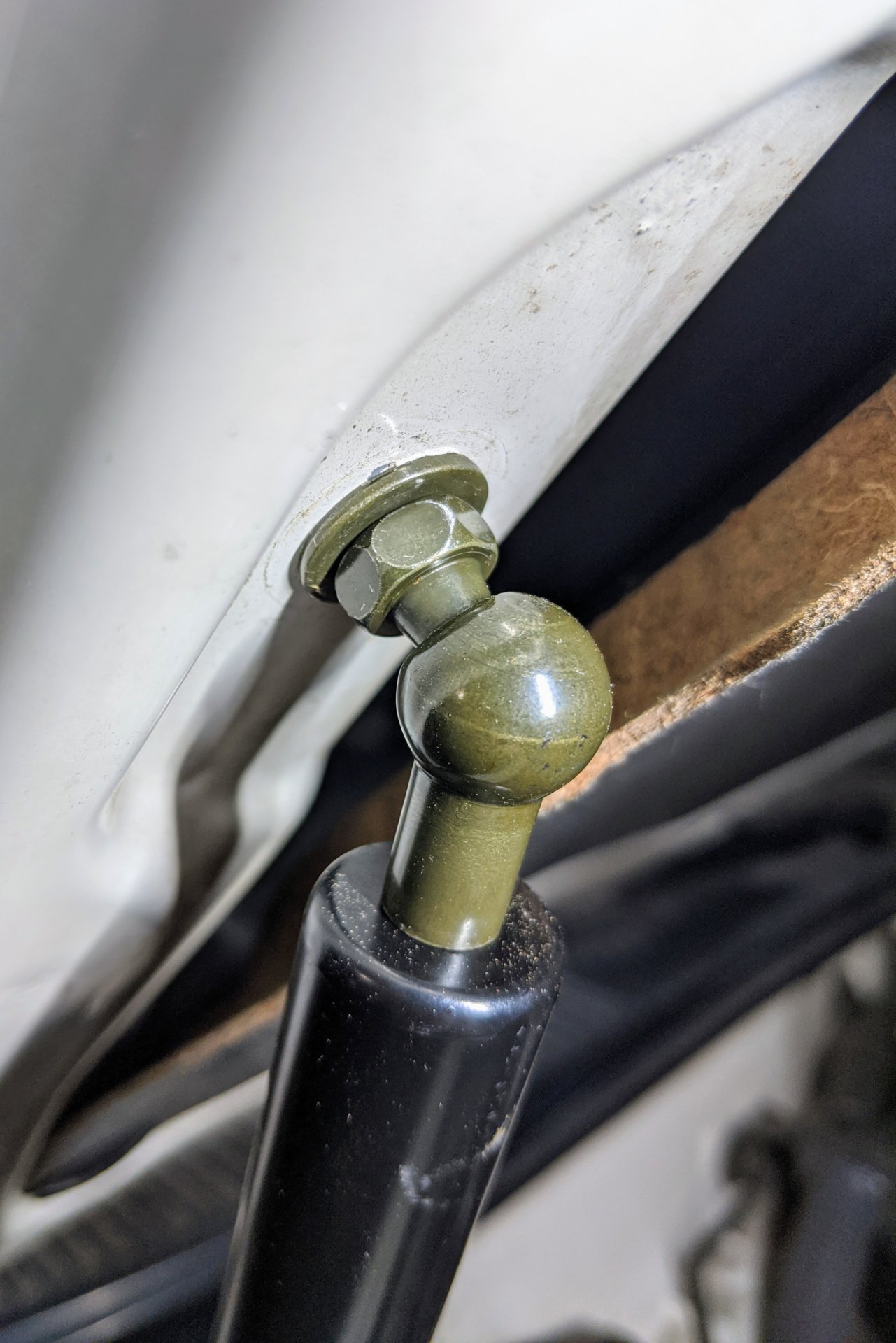 What brand do you guys use and what kind of lifespan do you see?

TheAshenWolf said:
I had to replace my hood struts again this evening. The last pair I put on were StrongArm but they only lasted 2.5 years. I was hoping for better results.

I decided to save $15 and went with some Chinese made struts with good reviews on Amazon. Hopefully they last longer than 2.5 years. But at $20 for the pair, I won't complain if they only go 2 years.

What brand do you guys use and what kind of lifespan do you see?
Click to expand...

Advance Auto originally sold the brand with the blue label. I'm running a set in other cars that I bought almost 7 years ago. Still going. The had a three year warranty at the time. I noticed they are selling StrongArm now. I might try to find another local company selling the blue label brand with a 36 month warranty for the next time I need lifts. I've had a set of blue labels start to go weak about a month before the warranty ended. In that case, I would take this in for an "in store" exchange. 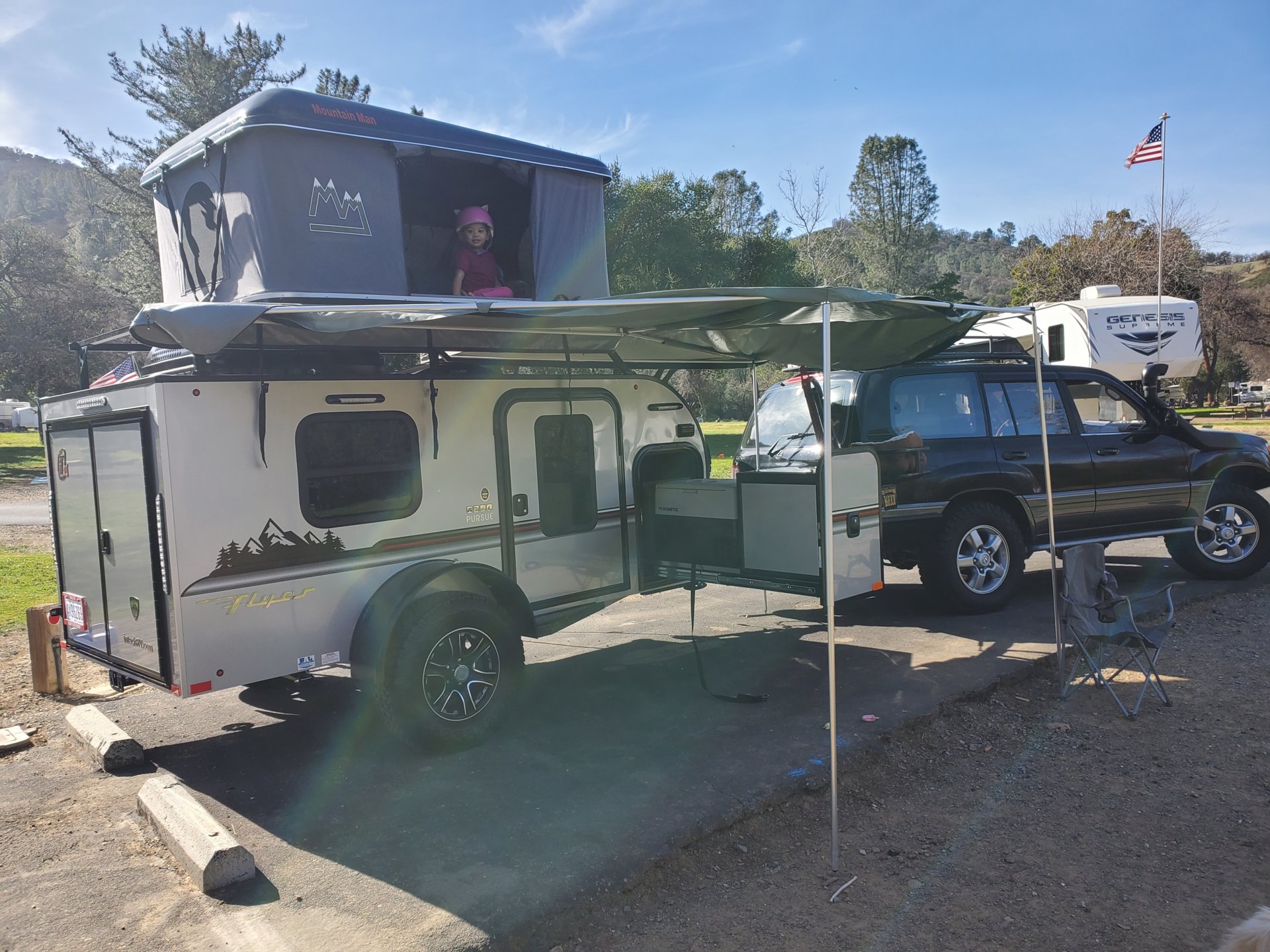 Albeit registered sometime ago for my 40 series I do now post something related to my 2002 LC 100 1HD-FTE sweet...
Got the rig about a month ago and, as everybody else, started making countless plans about the mods I'll do to her. And, of course, first thing first: replacing the lousy headlights.
So, ordered a pair of HID's on ebay, Depot made stuff.
Installed them with almost no issue except an inverted polarity of the left headlight's plug. Yet is a bit bizarre as both headlights' plugs seemed to be inverted (mean the polarity against signs on the plugs) but only the left one was indeed not working when connected and had to open each plug and reverse cables. Easy but delicate task although needed steady hands which I didn't have... Probably because I was sober.
All good, stuff fixed, working like a charm comparing with the OEM's: 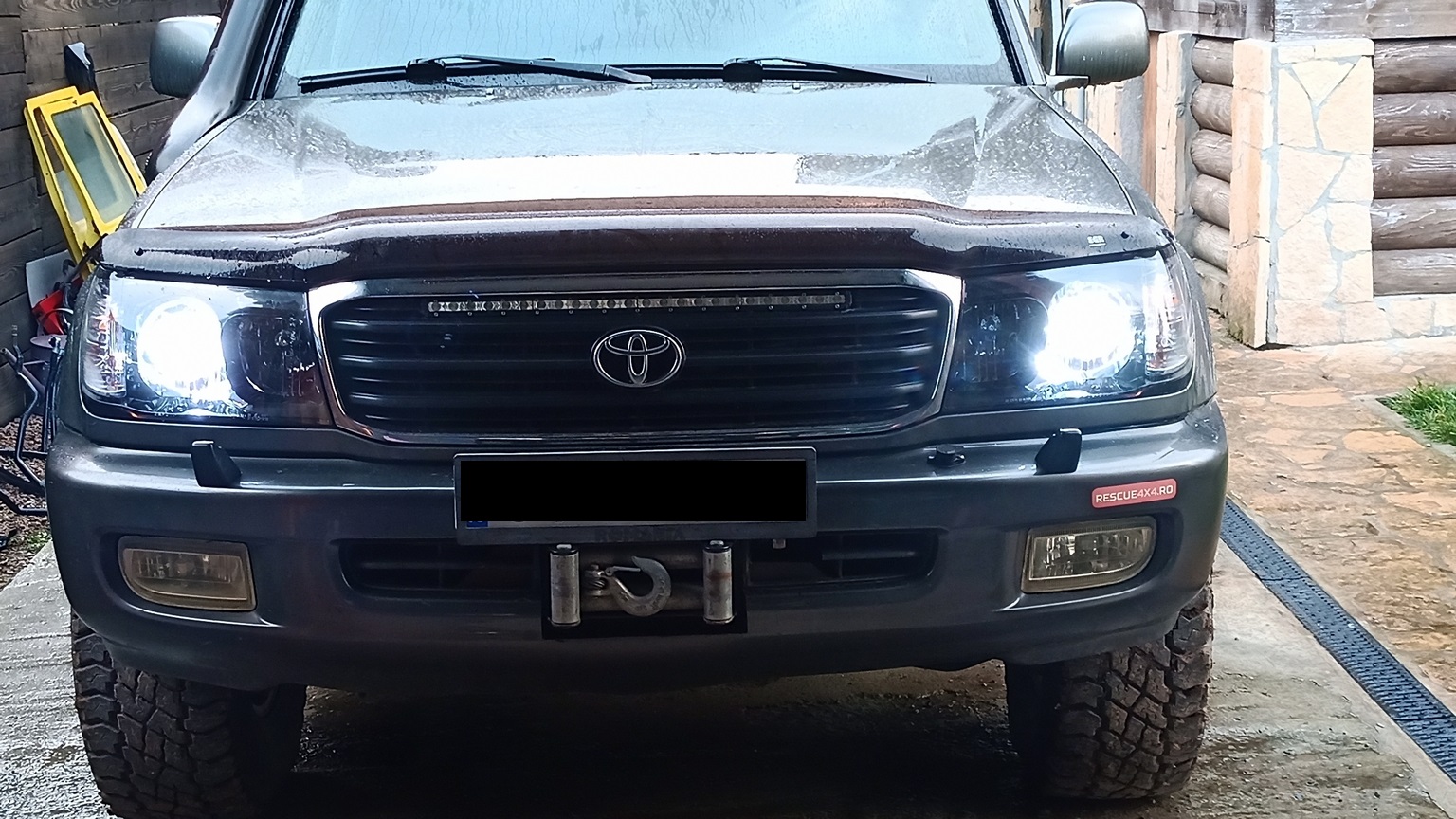 Once the daylight went away, started to empirically adjust them because, you know, now I had real lights and had to fully enjoy'em... For this I took real care about the warning sign sticker on headlights. Great that my Engrish is good so had no trouble understanding the warning: 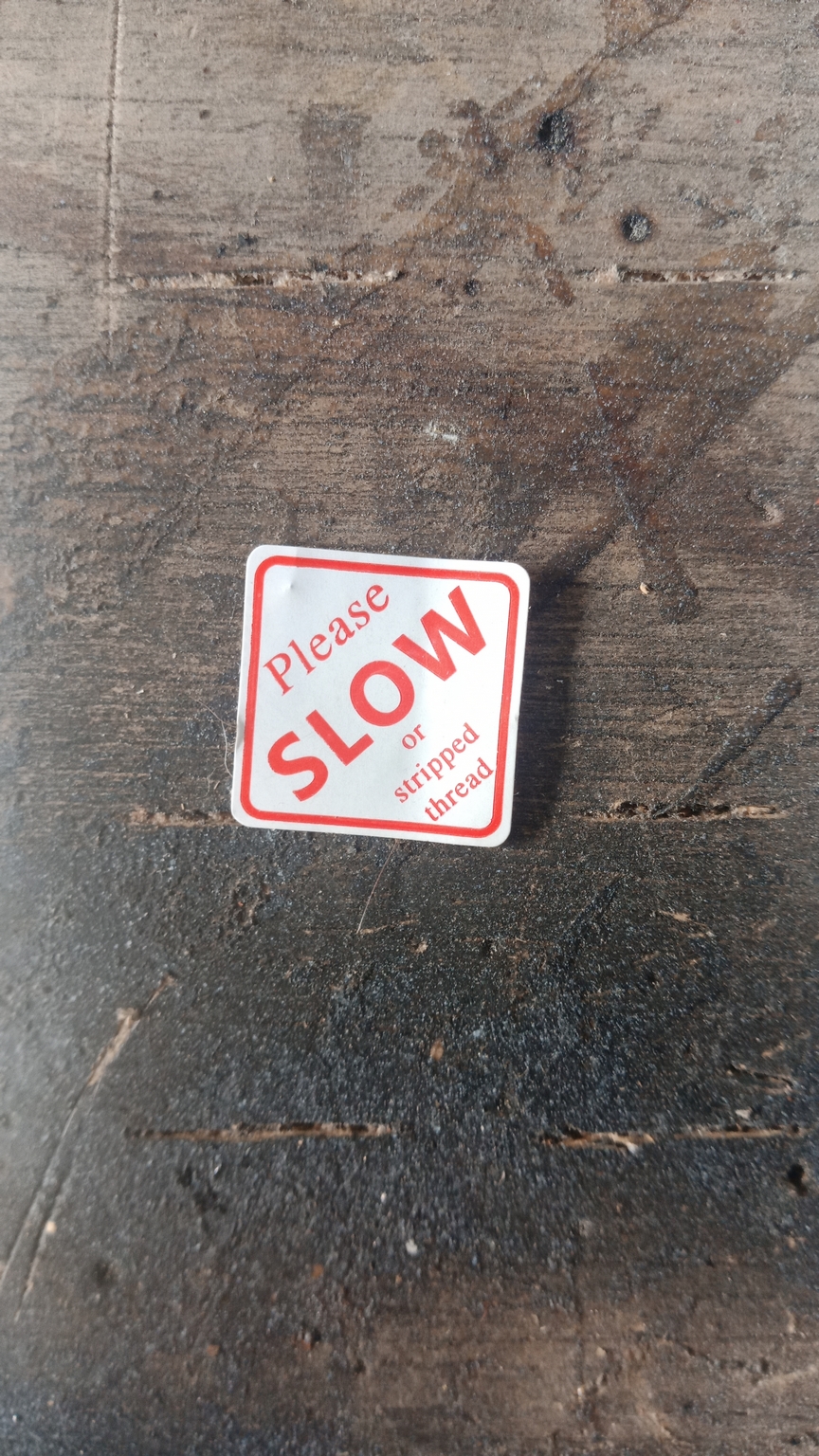 Got them at the height I thought would be just fine, against the garage's closed horizontally striped rolling door as guidance, and went outside for a test. realised that they are bit too high and might, actually would, disturb the non Toyota owners driving on the other side of the road.
So, went back and tried to readjust. It was then when I realised that my Engrish is not that good, though... Of course, after I leveled them down I thought they're too low and tried to get them up again. Damn, no chance at all, seems like the sticker applying dude was right: "...or stripped thread". Didn't know what thread was he talking about nor saw the exclamation mark....Actually the problem was with the left one.
It was close to midnight and I was just like that close to get them out and fix the issue. But I remembered I was sober and left it for the other day. Back in, I decided to deal with the sobriety....
Next morning, nice weather, coffee done, let's see the whatabout....
So, here's a short tutorial about fixing the low level of Engrish and the thing with "...or stripped thread".

First, look for the two screws located on the signal part of the headlights' and take them out: 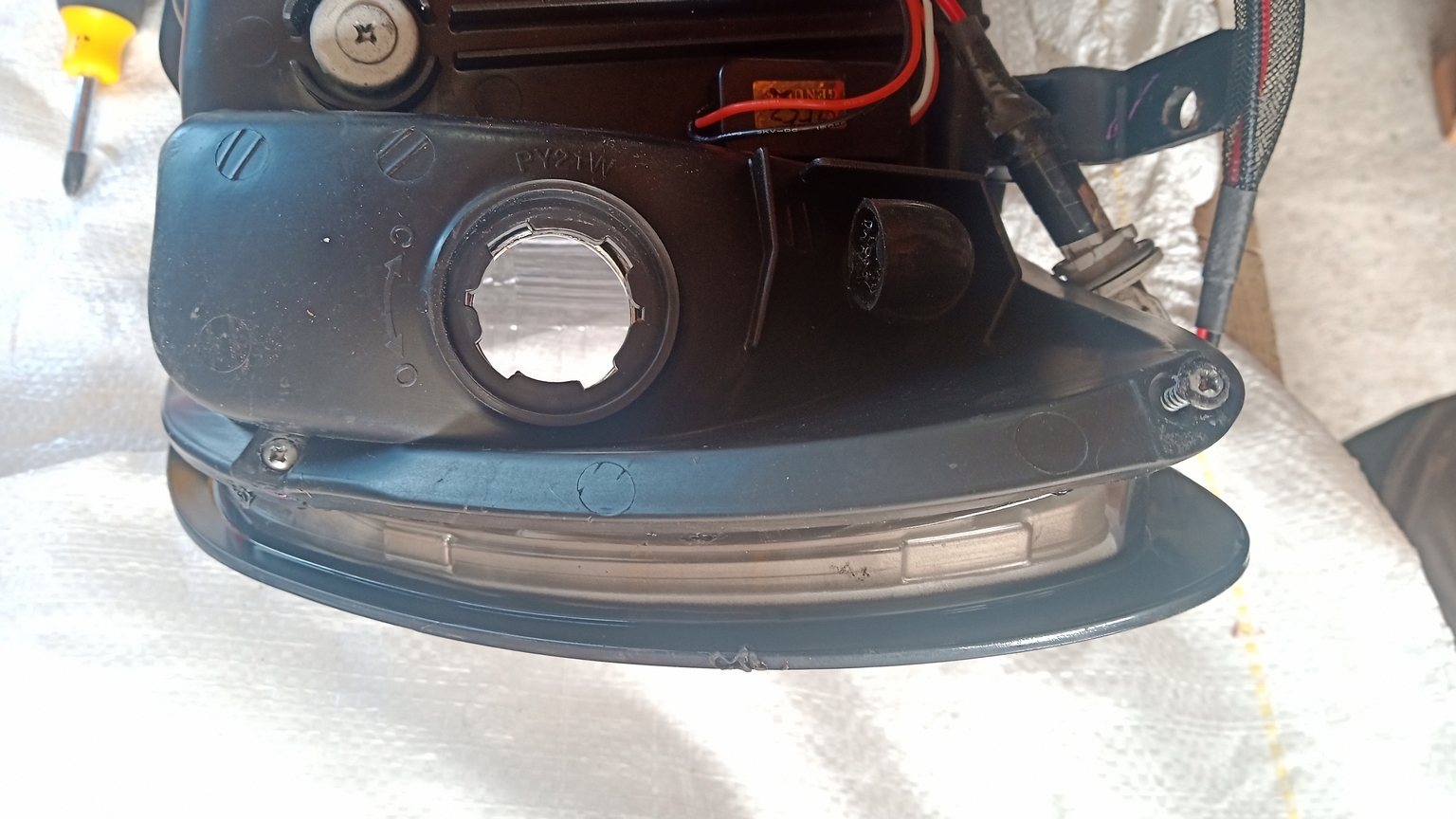 Then, heat the blower at medium temp (mine was set at 5 out of 9) and start to uniformly heat the edge of the headlight, starting on the high beam side/straight one. Once about 20cm heated turn off the blower (careful where you put it) and start to easily take apart the glass from the body. Breaking them apart just a couple of mm is just perfect, continue along the edge with such small steps. If you're careful enough you won't make a huge mess with the sticky bonding glue.
Once front glass has been separated look for the two adjustments screws/captive plastic nuts.
Gently totally unscrew both bolts and, forcing a bit the lens outside, use the pliers to get out the plastic captive nuts (they are the culpable for the ”stripped thread”. 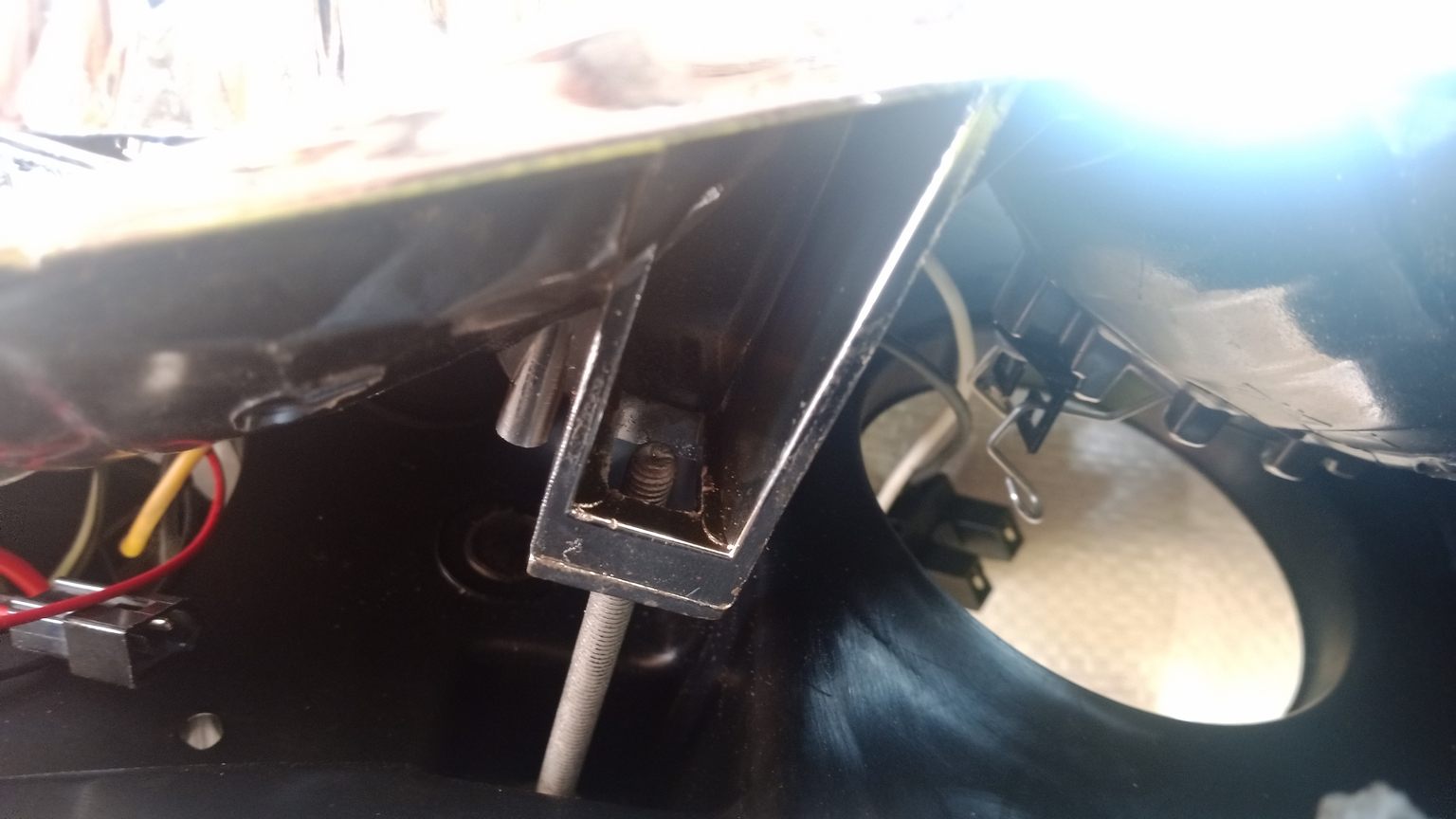 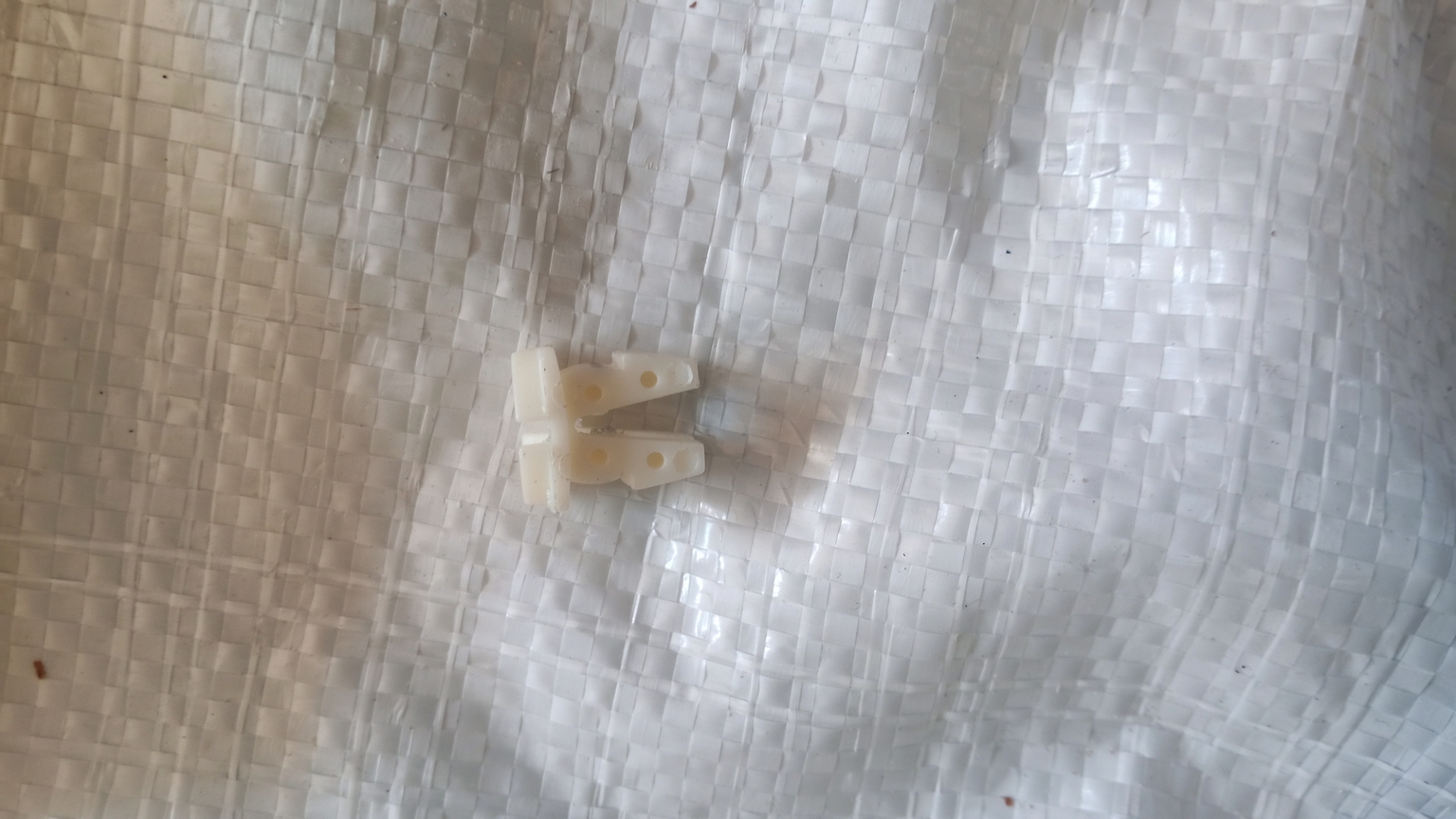 Use the 8 mm drill to bore a bit deeper in the plastic nut ~ at the same height as the 5mm nut you're going to insert into them. Better a bit less, as the additional material will encase the metal nut.

To be continued as I cannot upload more than 5 pictures.....
P 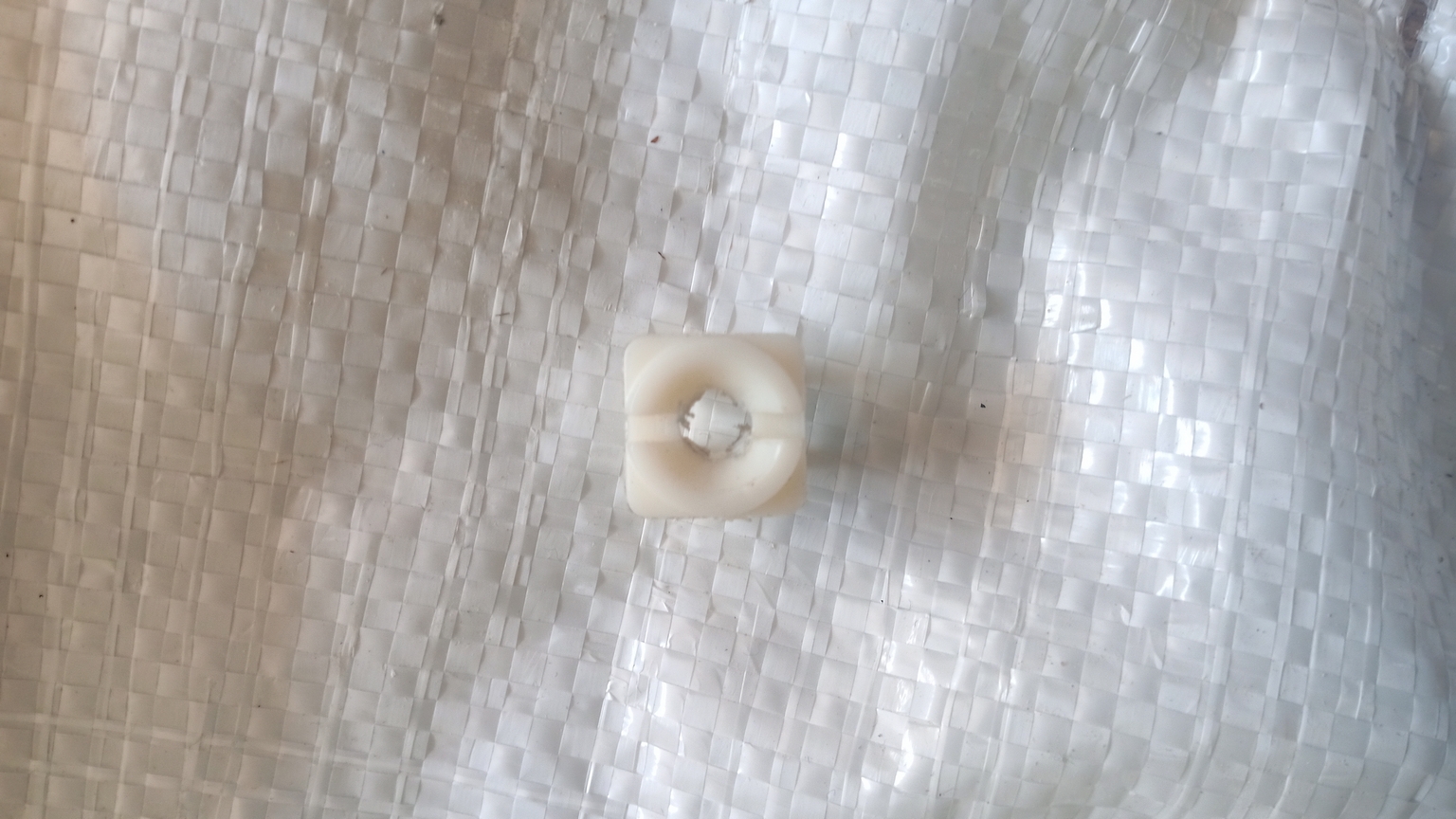 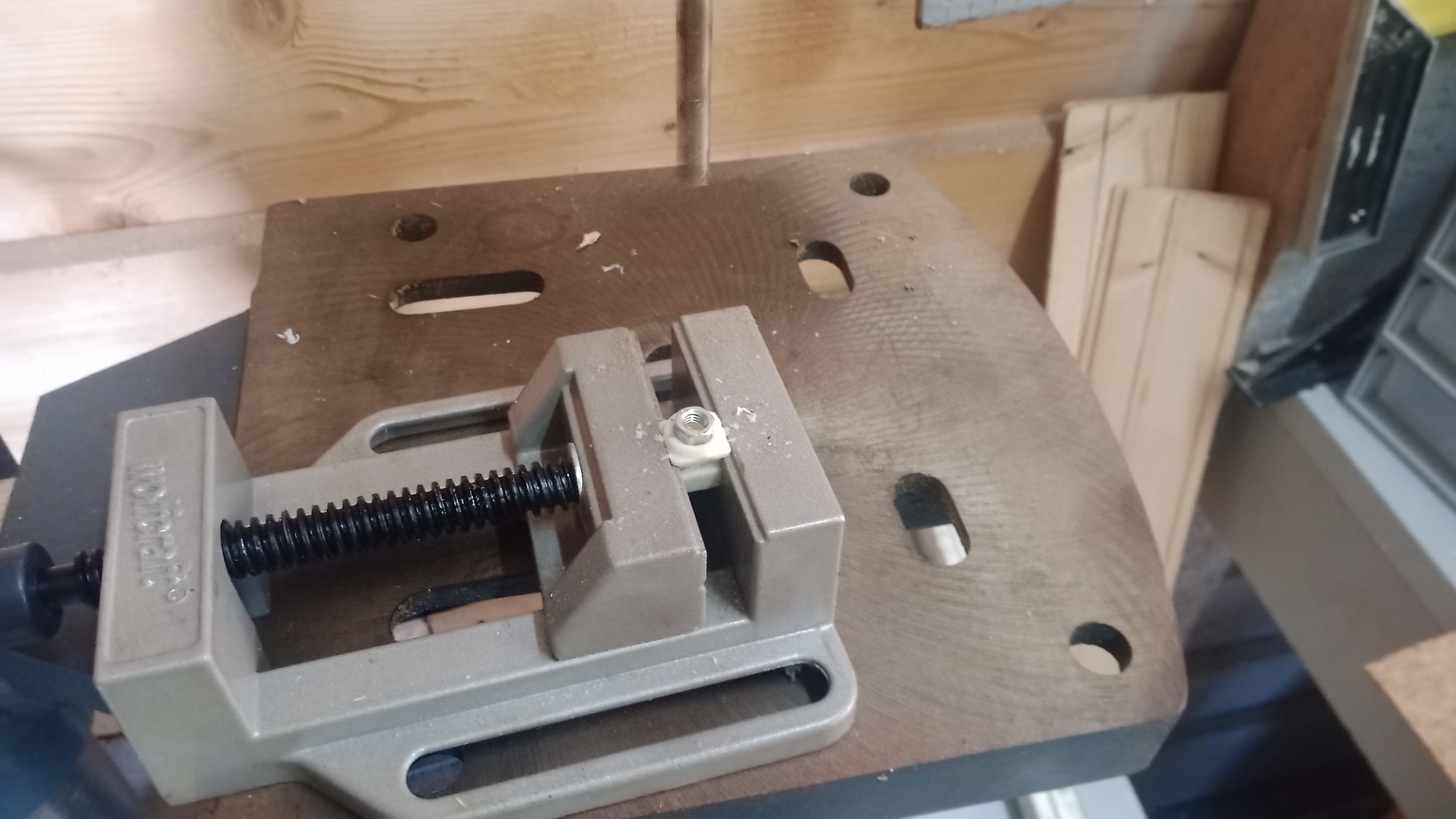 Once plastic nuts bored get a 5mm bolt, screw in the nut in such a way that they go past the bolt's end something like 1mm, handle it with the pliers, turn on your heat blower (I went at max 2000W for 60 secs), heat the nut and then carefully place it on top of the plastic nut, in the pre-drilled hole, as perpendicular as your shacking hands would allow it...
Do not rush unscrewing the bolt, let it cool by itself or pour some water on it. Once the assemble cooled down you can unscrew the bolt and, if the case, clean up obstructing melted material (or use a 5mm thread drill to clean it).
Here's the final result: 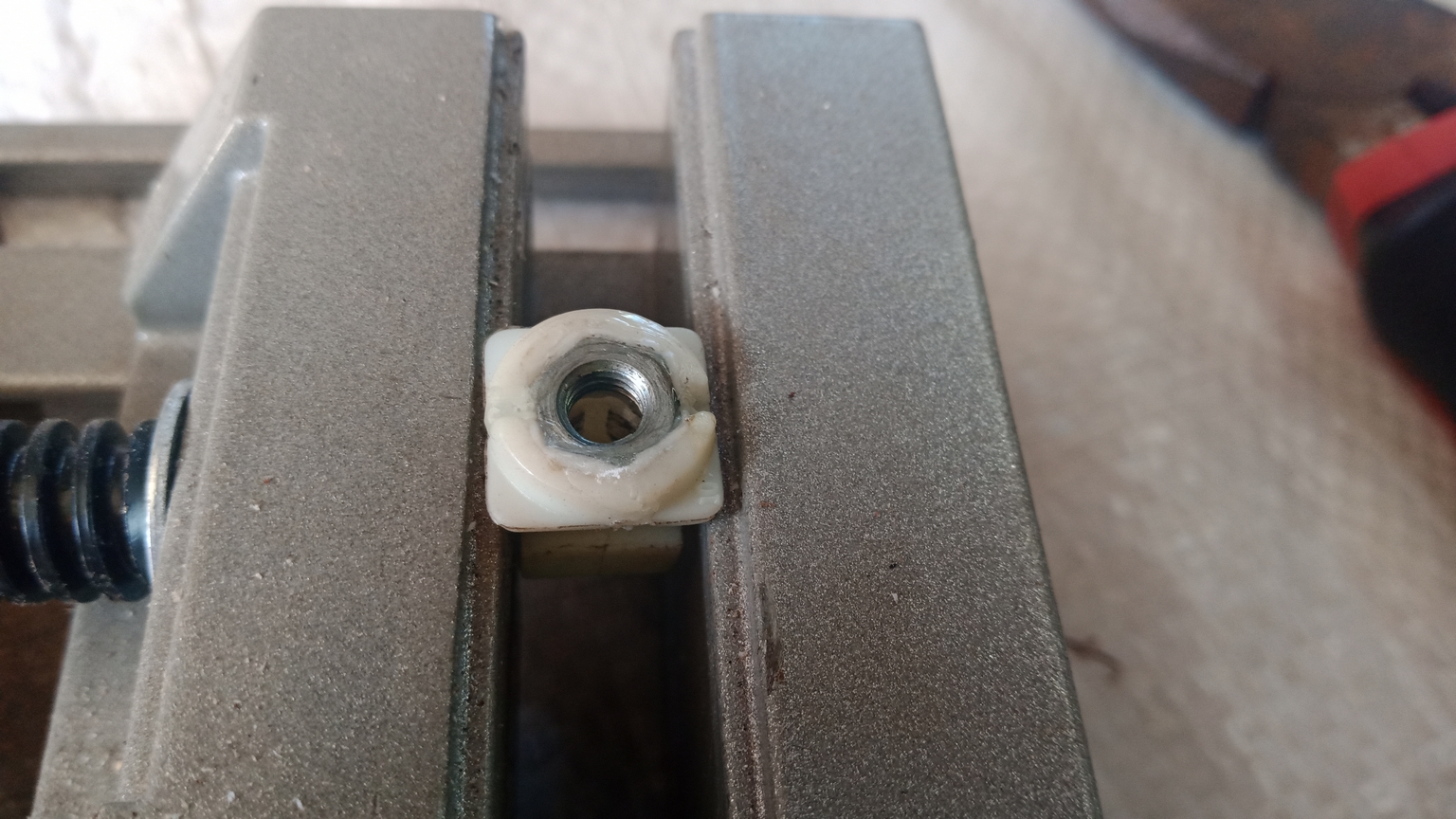 Adding some acrylic glue might assist to definitely lock the nut in place albeit the melted ABS(?) around it would be just enough.
Once all plastic nuts fixed (I have decided to do the other headlight) fix them back on.
I found it to be easier to first fix the nut on the vertical adjustment screw and then force it, by gently pushing the lens against the plastic nut, and then fix the horizontal adjuster.
Once everything in place get the front glass and just fix it, without trying to push it back into its slots, as to perfectly match with the headlights body.
Then, use the heat blower at the same medium power to warm the edges. Now go the other way around, first heat the signal sign side first and then go along around the hole headlight. You'll see that once heated it looks like the front glass, by itself, goes back to its right place. You might need to slightly press where things are bit stubborn but that's no big deal at all.
Now, you have it: nice headlights with proper adjustment screws and nuts. And the next level of Engrish understanding, too.....
Already tried them, up and down several times, they work with no failure.

L.E.: did the rough adjustment on her older sister's nice butt as a guide... 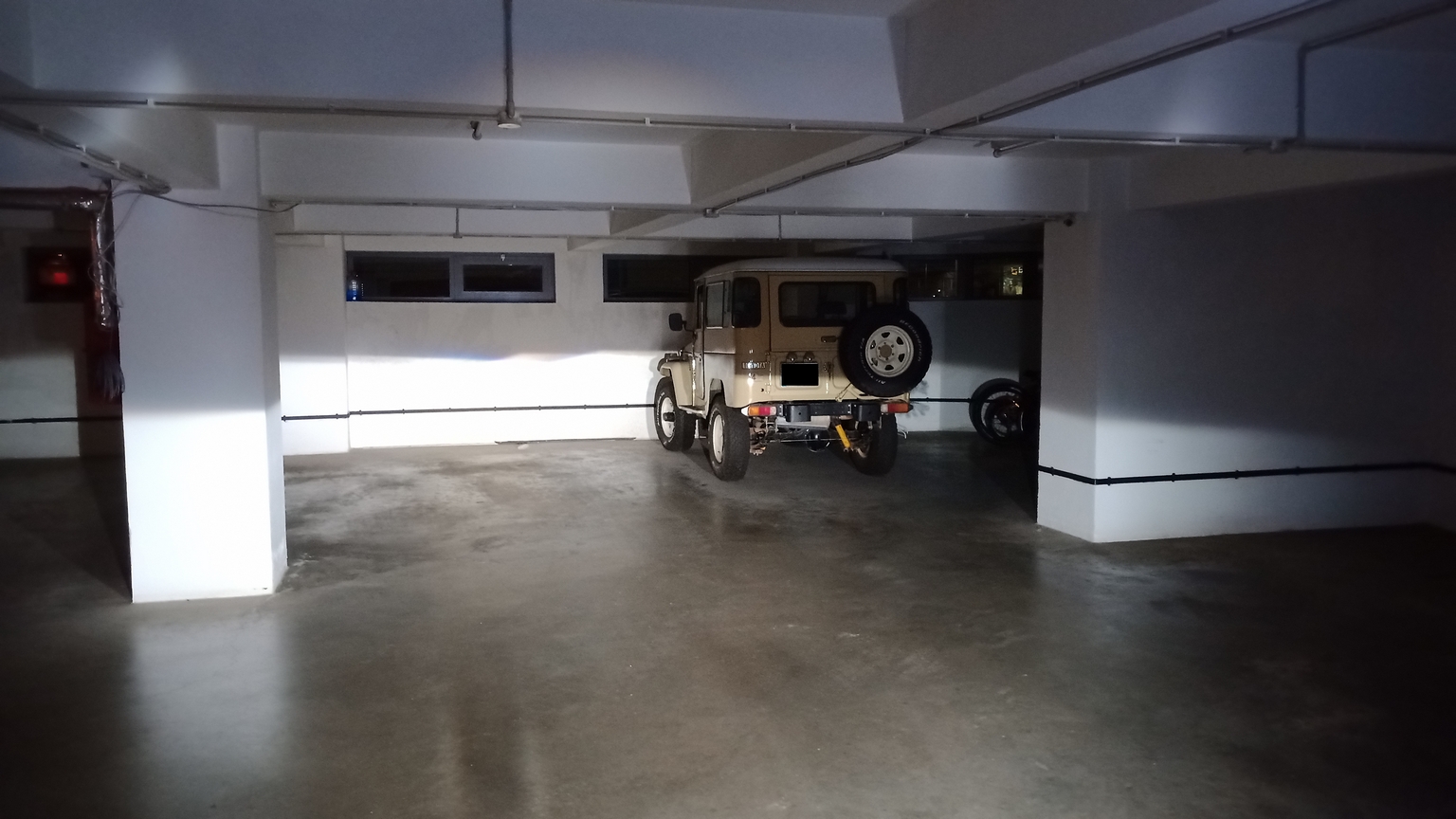 
Is that painted, or vinyl material? I like it!

Replaced my radiator, 2007, 200K miles OEM unit. I'm gonna go ahead and blame it on this rat, there's no way a 100 series rad would leak at this little mileage. Top looks new and not browning either. 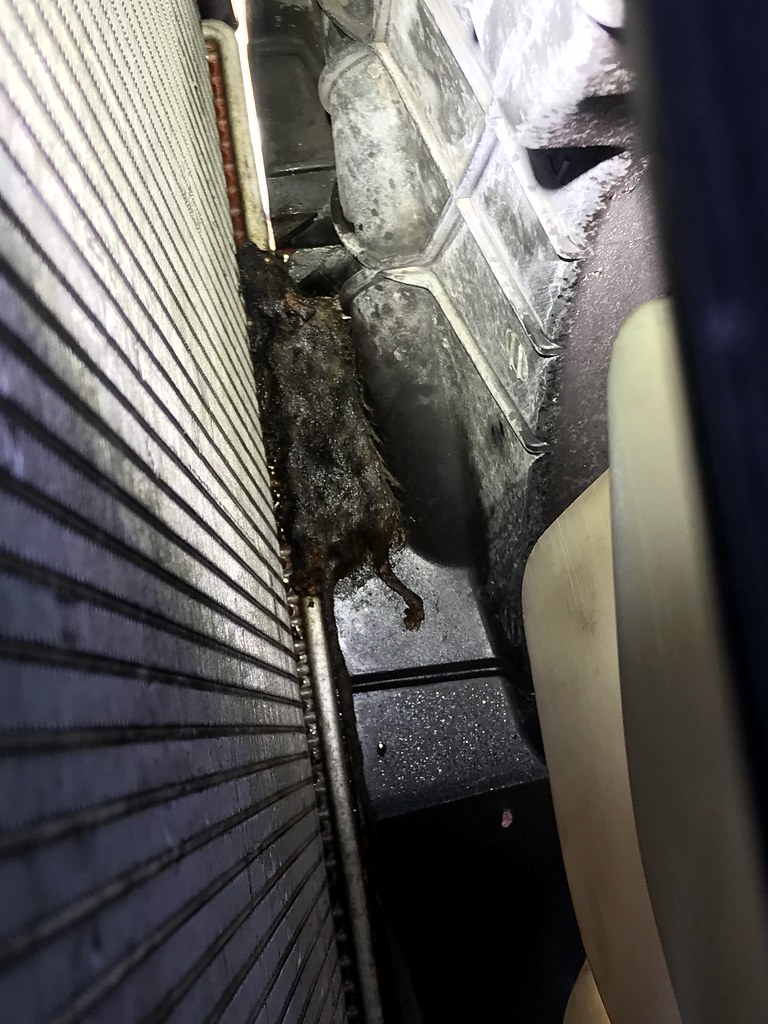 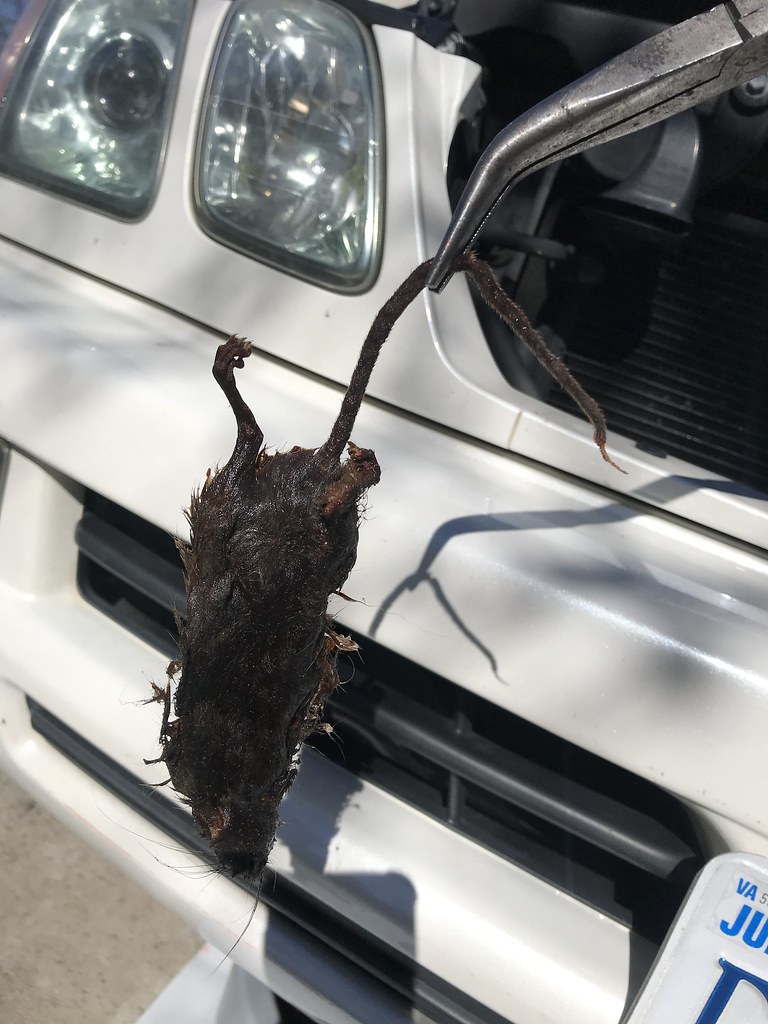 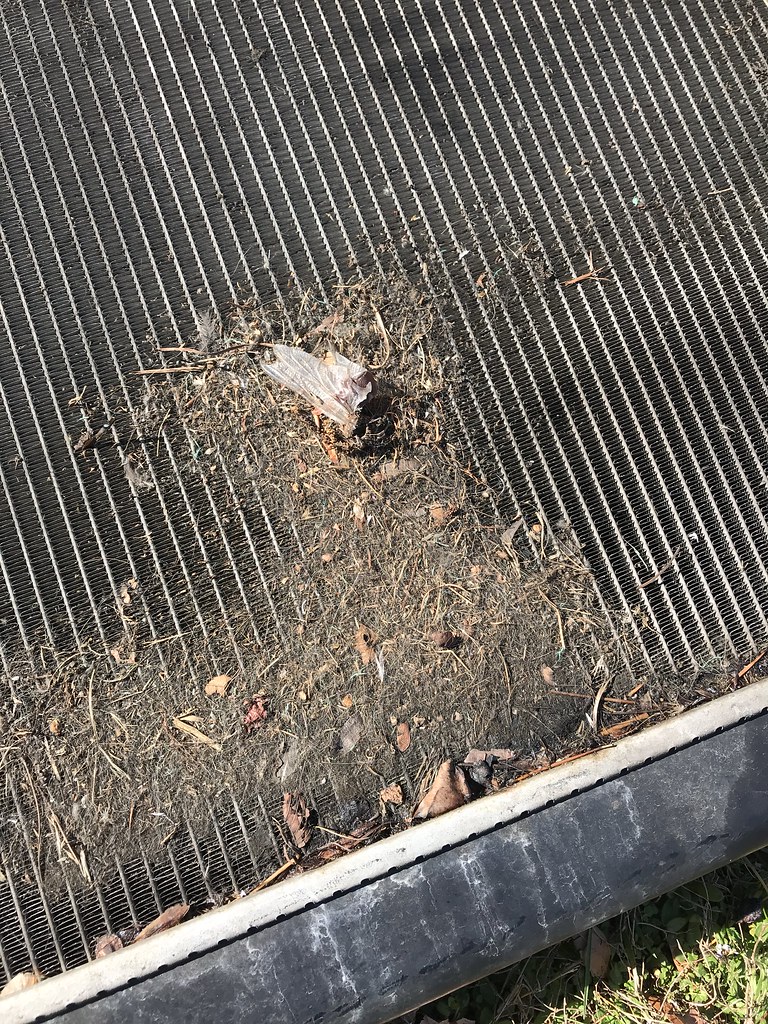 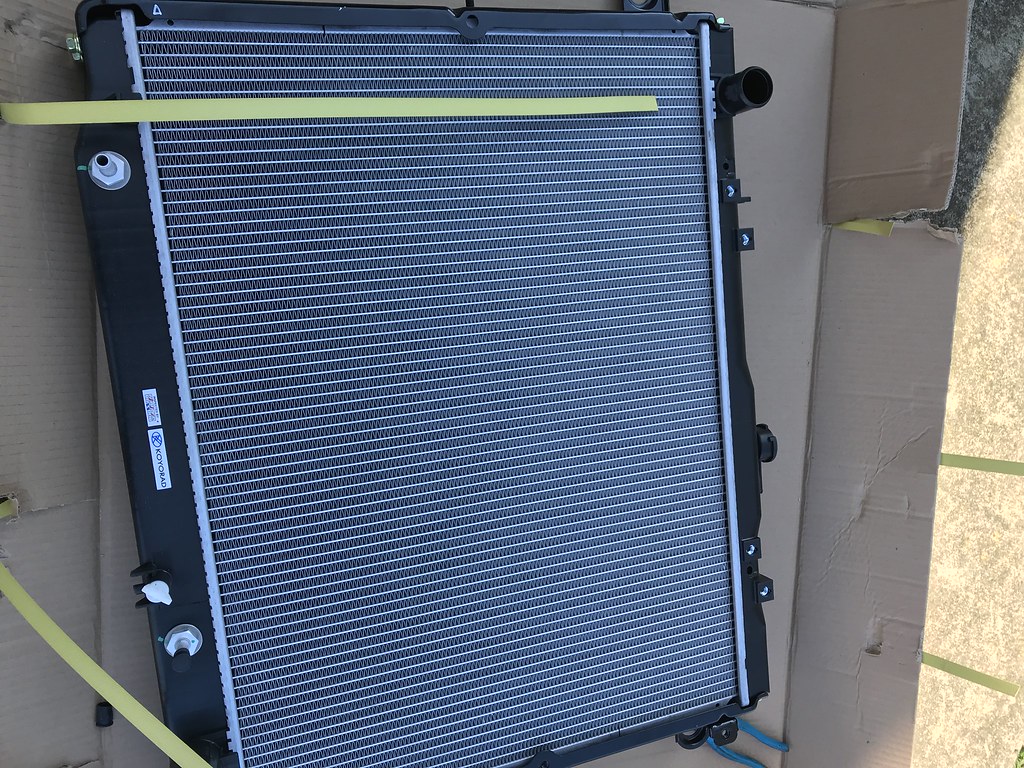 It's such a joy wrenching on this truck without rust, everything came out so easily and i didn't get tetanus. I didn't even curse once, and this job is very simple, a few bolts and just pull it straight up.
You must log in or register to reply here.