Speaker Pod Install....the way I did it.

Thought I would post up a quick summary of my install on the speaker pods I've been bringing in. I did mine a little differently because I'm really particular about speaker grilles.....basically, I can't stand them.

Disclaimer number one......I am NOT a stereo guy. I hate stereos. I dread working on cars that have systems in them, I feel bad for people that have to install them and I could write a book on all the hack stereo installs we've seen on cars in the past 20 years. So....not a fan.

The speaker pods come with instructions and I found them to be really accurate. Again, mine was a little different because of the grille setup.

First things first....order some new door panel clips. My doors had 12 each. I had some leftover from an 80 series door panel rebuild....I used them and I shouldn't have. The ones on my door panels were a ball and socket style...I used one piece ones. They did not come off very easily(I had put new clips on my passenger door a while back to tighten it up...it had 4 clips holding it on and some screws....nice). When I went to remove them....they were far too hard to get off and the fiberboard ripped even with our door panel tools....not a huge deal. New clips held just fine in the panel.

Clips I bought after the fact....this is what my panels had....well at one point it had them. There weren't many left. I got these on ebay. 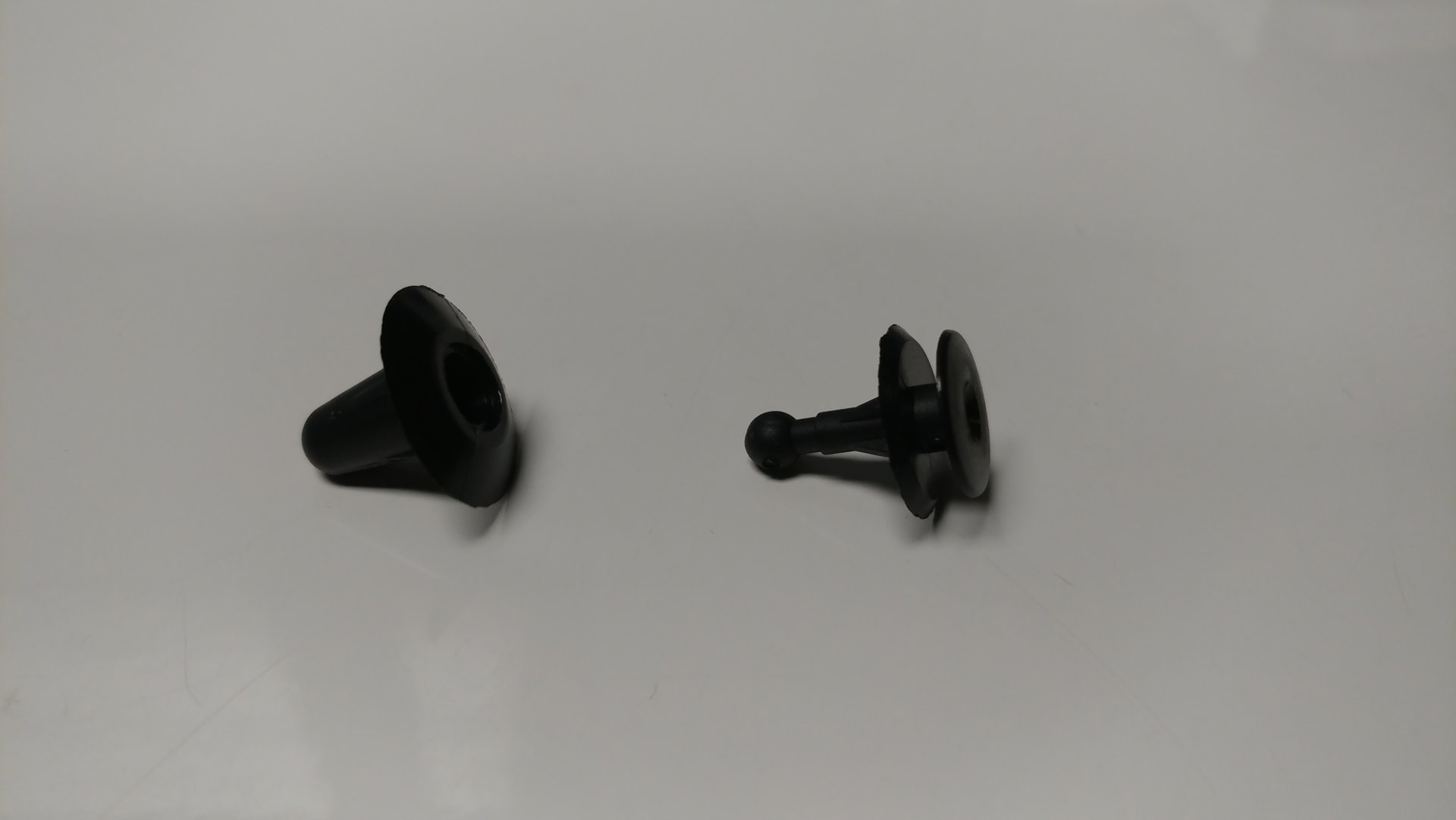 These are the clips I had.....the interior going in my next 79 from a 2012 76 had white versions of this....I got these on Amazon. These shattered when I tried to remove them. Almost like they were brittle....where as the OEM ones were more pliable. 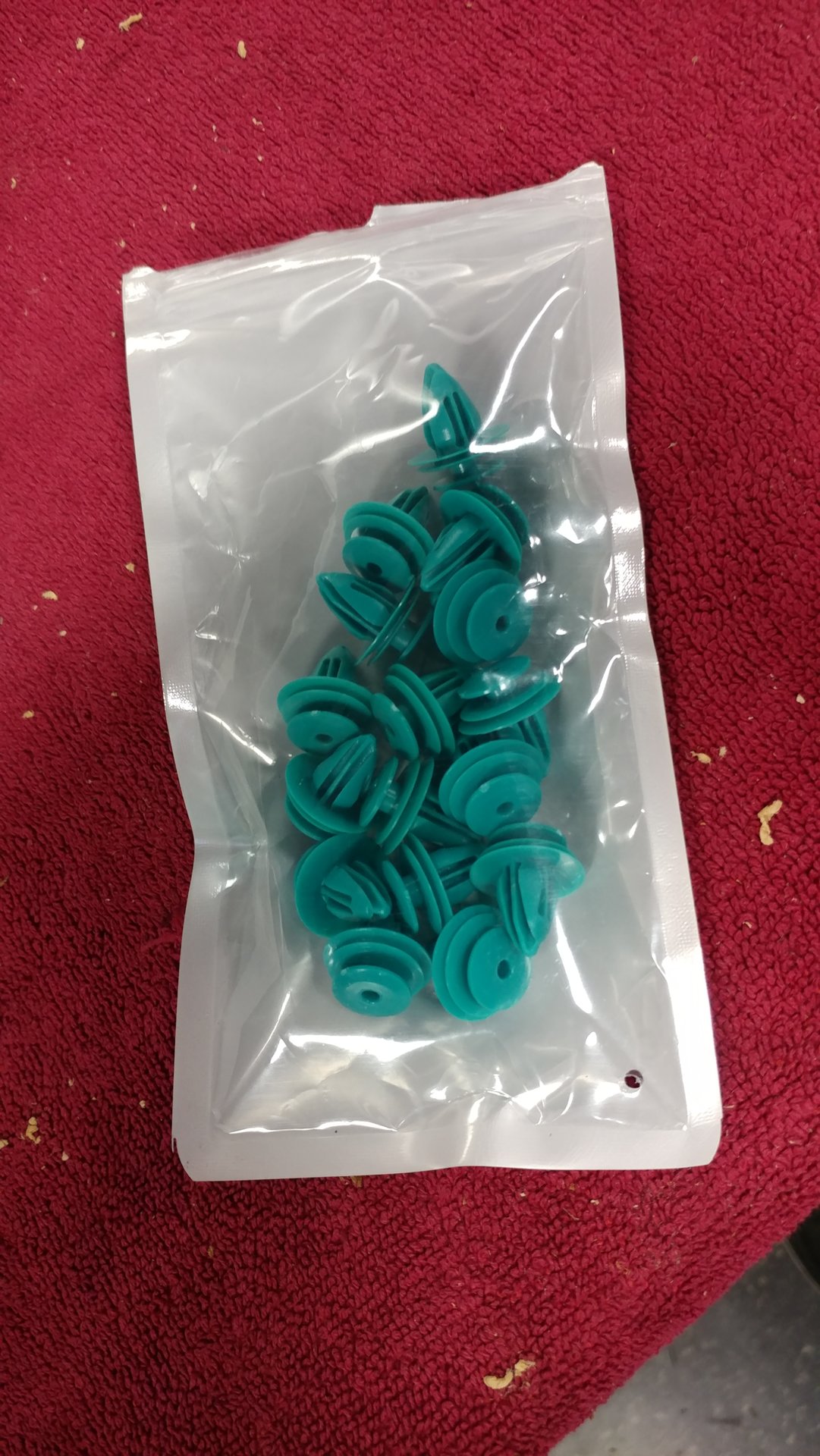 No clips? Run it home with self tappers......a stereo installers best friend. 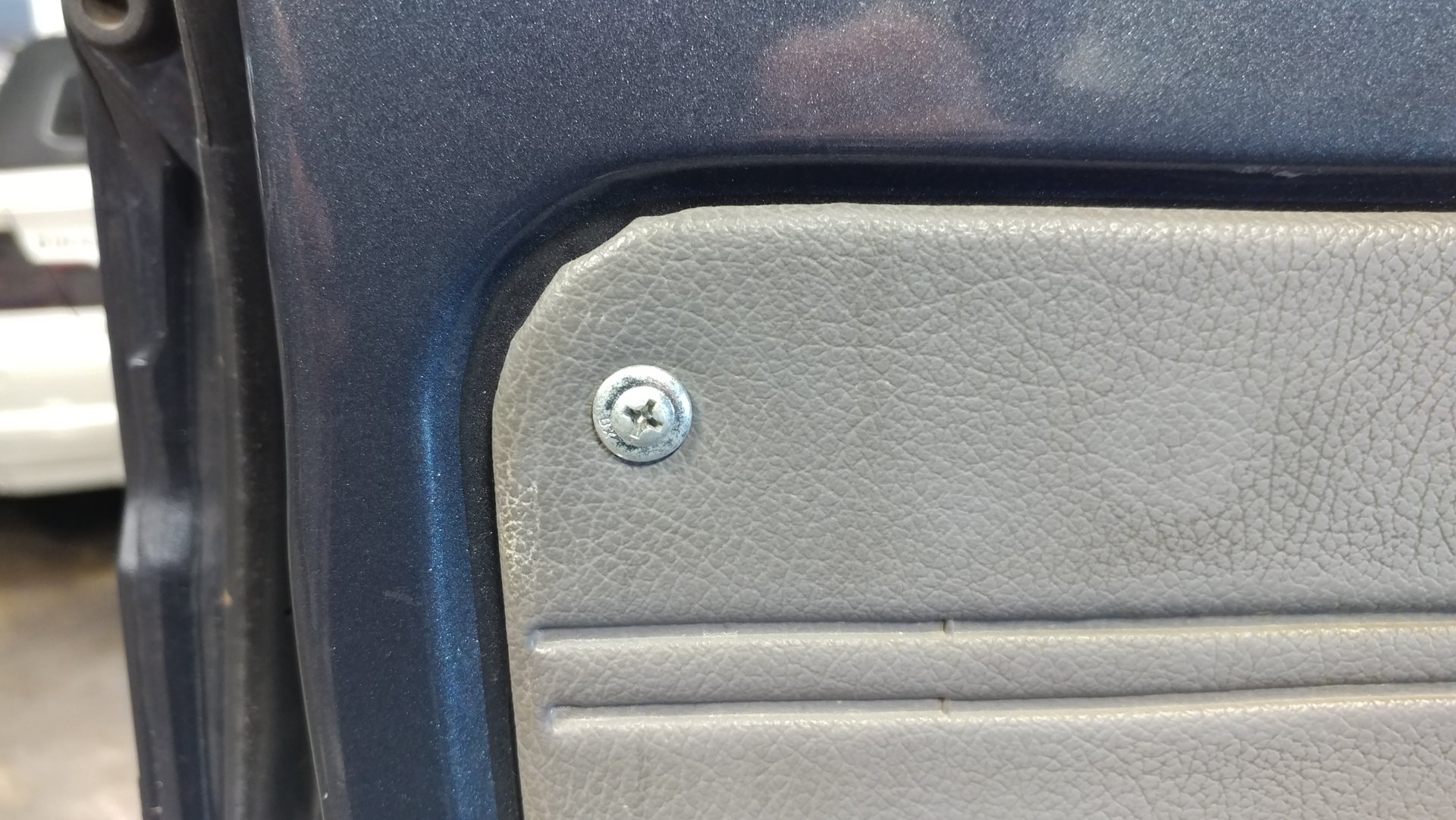 A dirty and worn out panel on this girl. 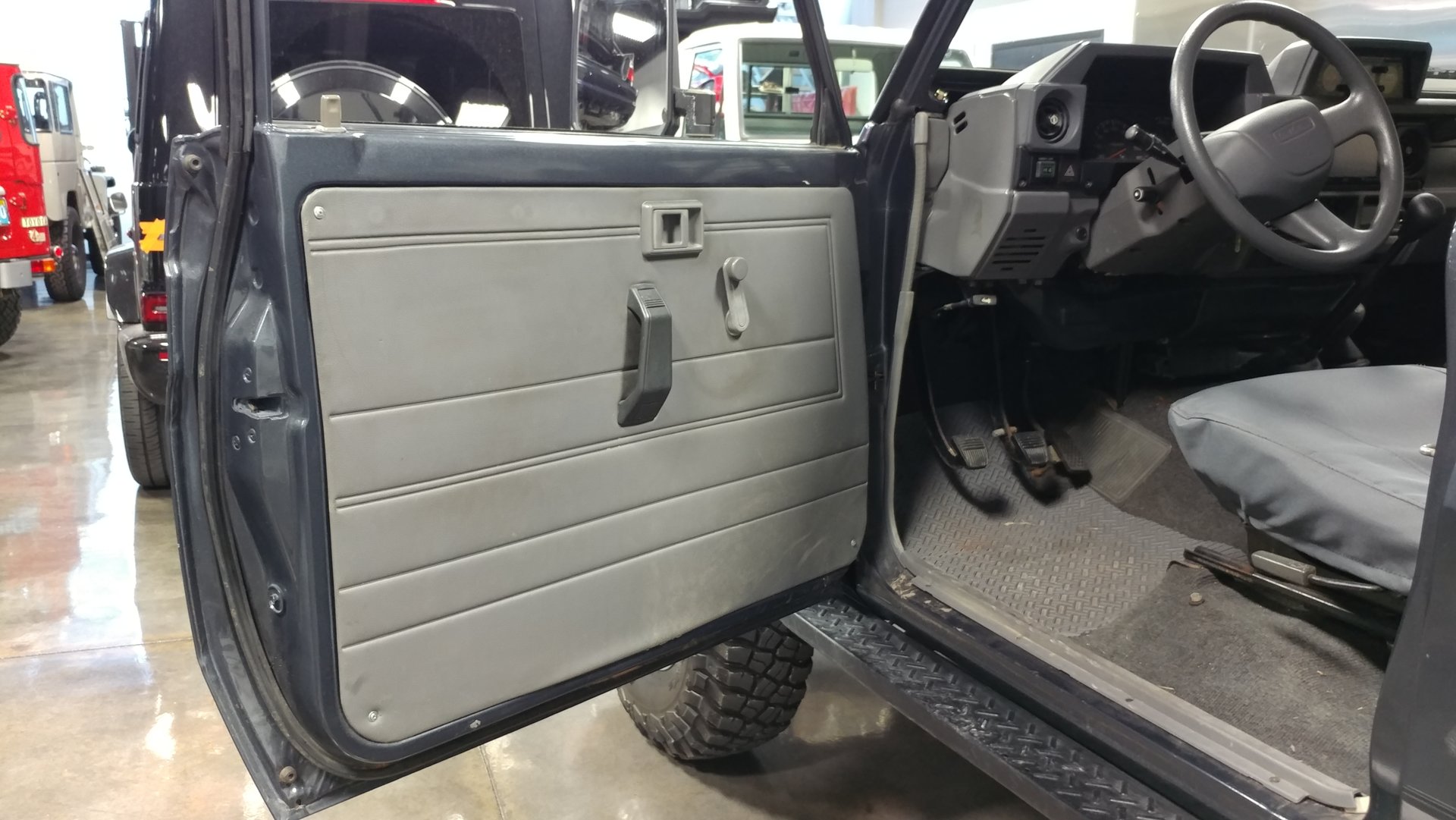 Panels are easy to get off.....if you've never tried the rag trick to remove the window crank, try it. Just make sure you keep an eye on that clip.....when it flies away...it's gone. 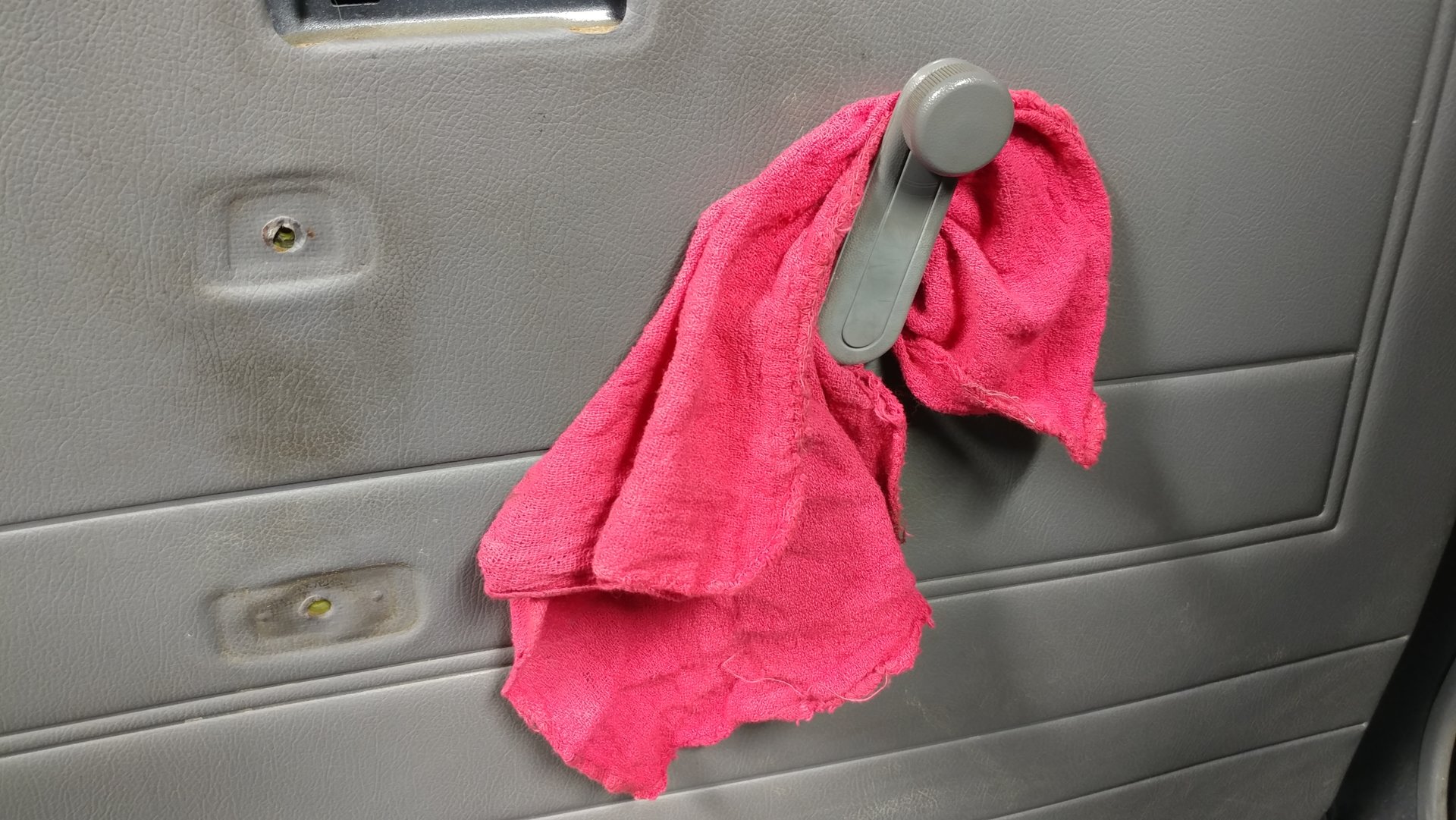 The instructions cover the rest of the steps of this phase really well. I cleaned my panels with some Simple Green and a brush...looked really good. I taped mine out per spec(15mm back from edge, 10mm from bottom....I think that was the measurements). I didn't bother using paint on the pointy inserts....pressing down hard enough on the speaker pod made 14 perfect little indentations. I marked each one of these with a Sharpie so I could see them. Maybe that is why they use paint. It's not rocket science. 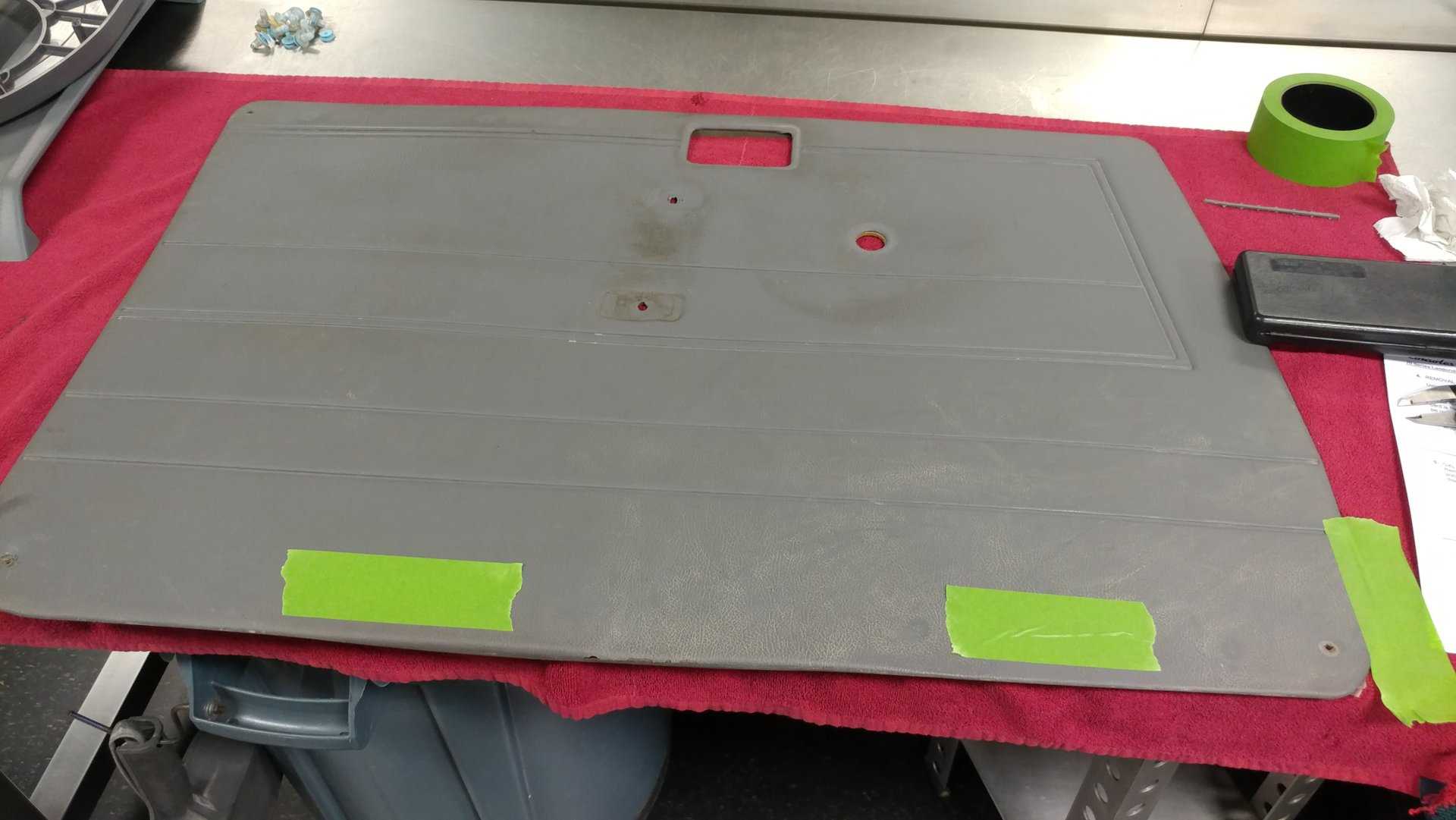 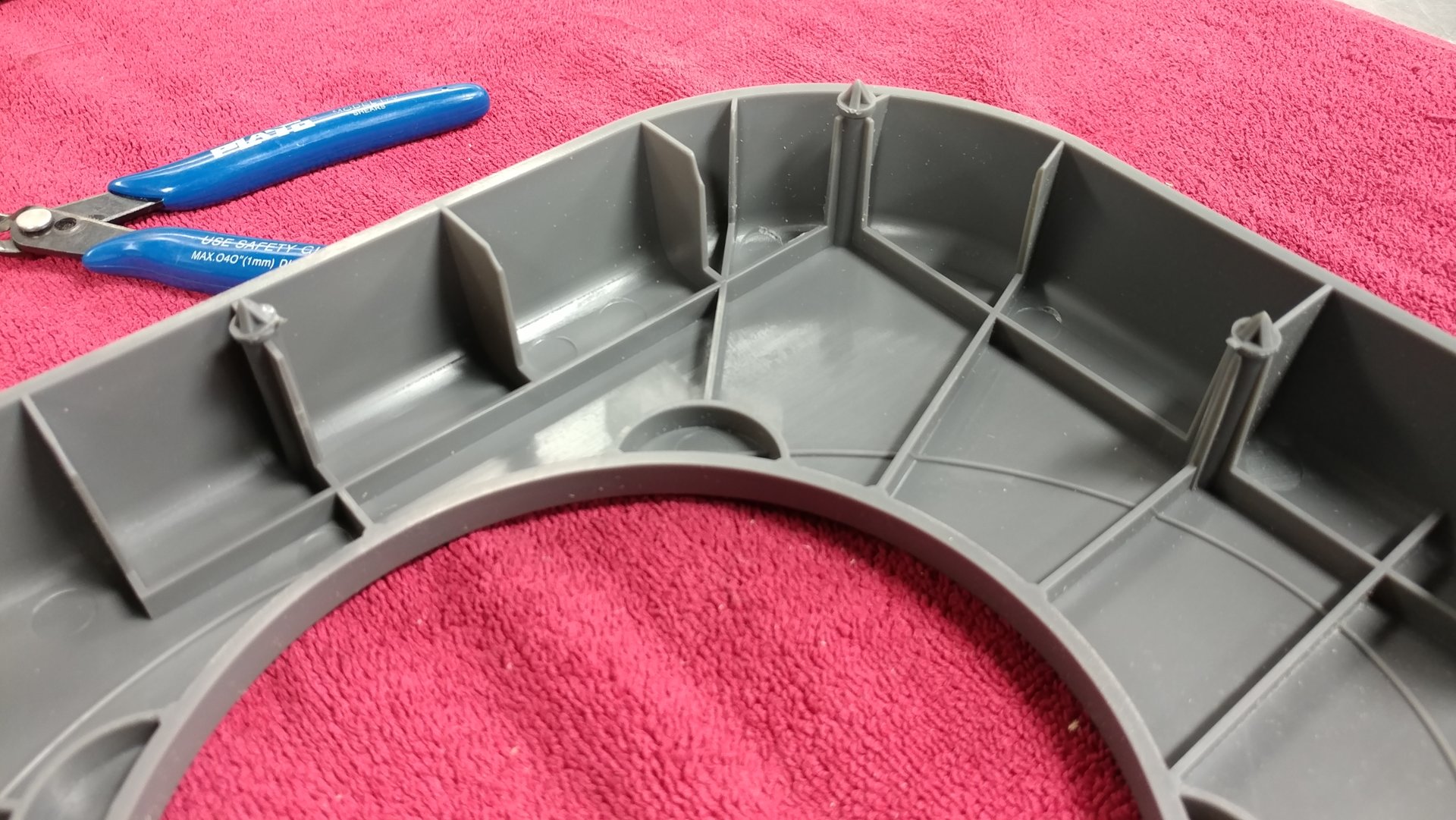 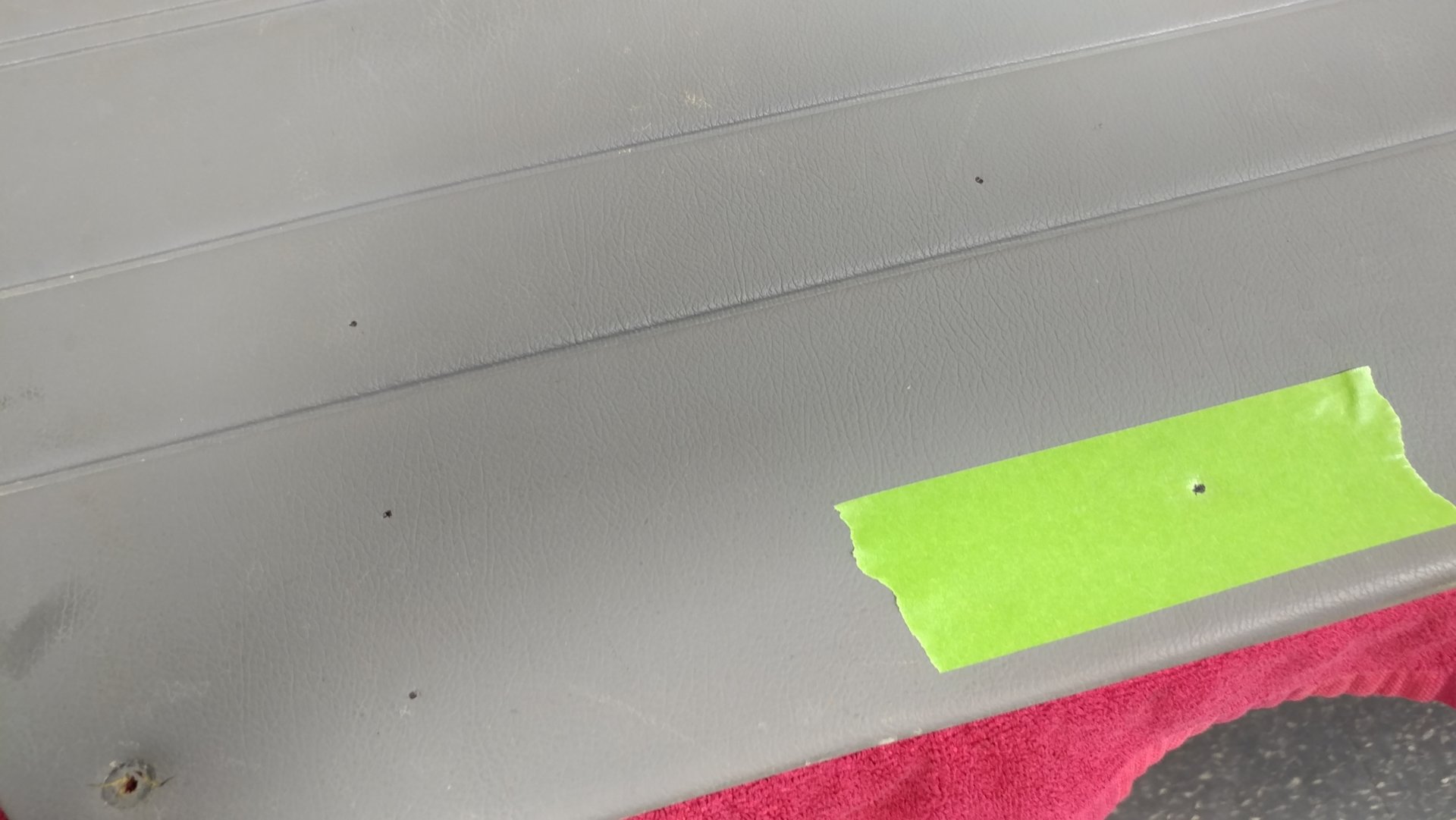 Now this is where my install differs from the instructions. Because I was stuck on using an OEM grille from an 80 series front door, I needed to mount my speaker to the MDF insert and then mount the MDF to the door panel. You're supposed to mount the speaker on top of the plastic pod....INTO the MDF insert....then the grille snaps on to the speaker. You can run a larger speaker obviously with this setup.....they don't protrude deep into the door which can cause all kinds of issues.

Because of my OCD with the grille, I ran a 5.25" speaker. Turns out, I think I could have run a 6.5" shallow mount speaker the same way I did mine....sandwiched between the plastic pod and the MDF insert. Kind of hard to explain. I'll do that on my 79 as soon as the oak colored grilles arrive(oak is NLA.....so I went used ones).

Speakers I went with.....local stereo guy I knew had them for cheap. 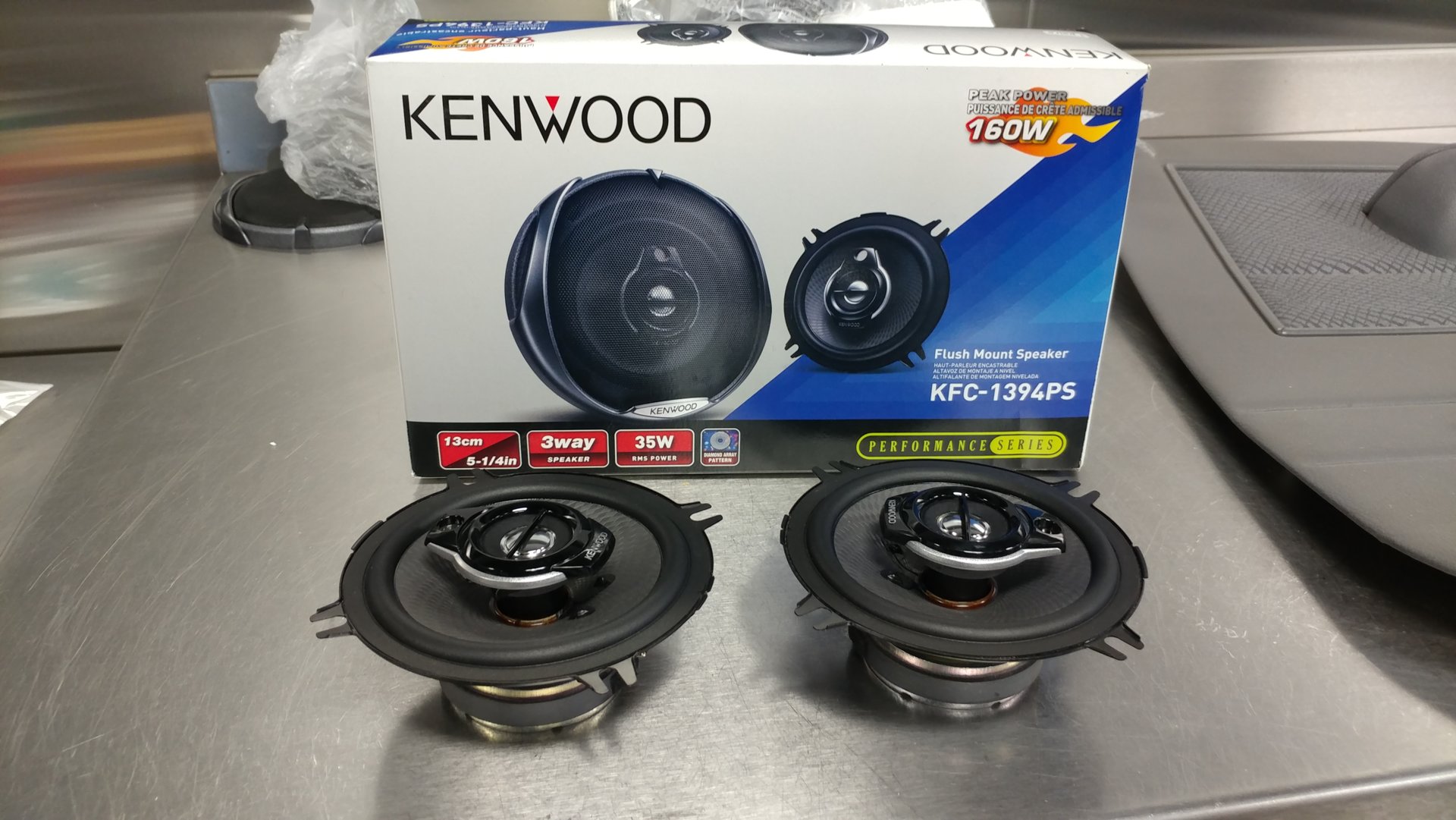 So this is how I mounted them onto the MDF insert......self tappers! Felt great. Maybe I am a stereo guy at heart... 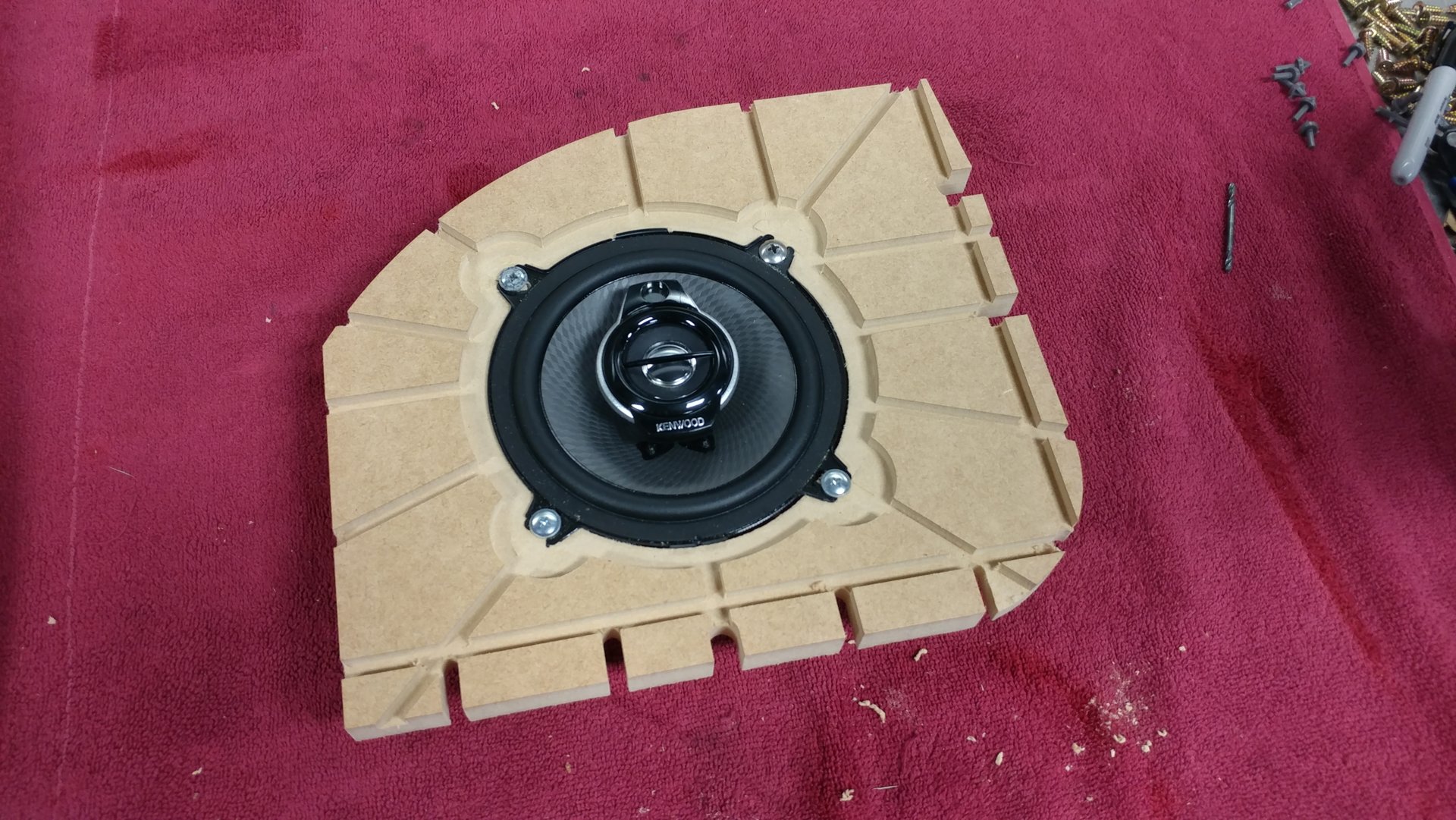 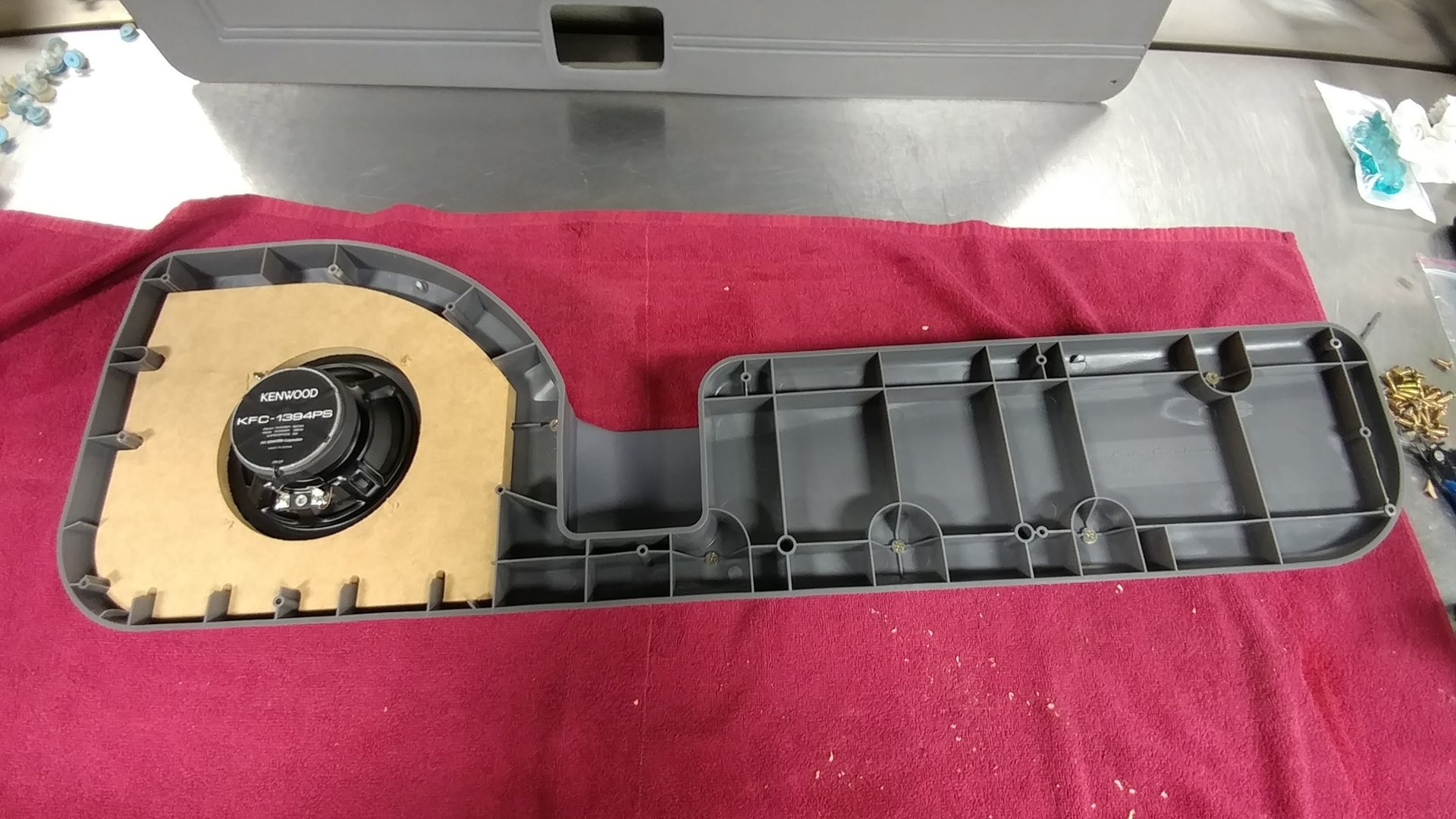 At this point, I put the storage pocket on the speaker pod and installed it on the door panel.....all the screws this time since it isn't coming off after this. 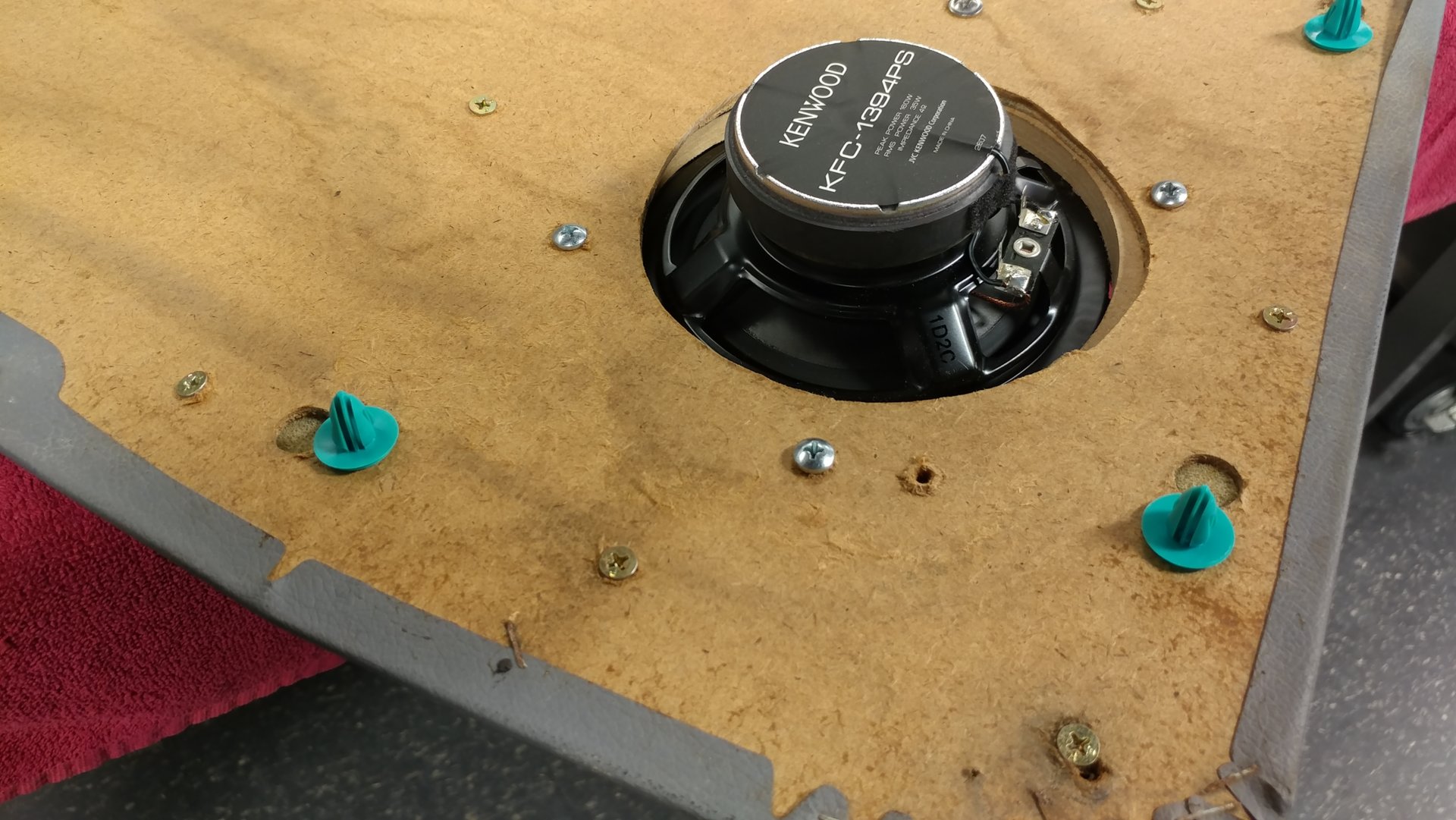 So at this point....you need to make sure all clips are removed from the back of the door. Place it up against the door and see if you have any speaker interference. Because I never believe instructions and/or I rarely read them in their entirety, I didn't hold the panel up WITHOUT the speaker installed to see what metal would need trimming. The instructions go over this pretty well.....but who needs instructions. Turns out I could see what I needed to trim so I just cut it out and all was well. I could have probably just bent he sheetmetal back. I like cutting metal though. I have a lot of tools that cut metal.....nice to use them.

Pro tip......don't cut sheetmetal when the window is down.....wind that sucker up! 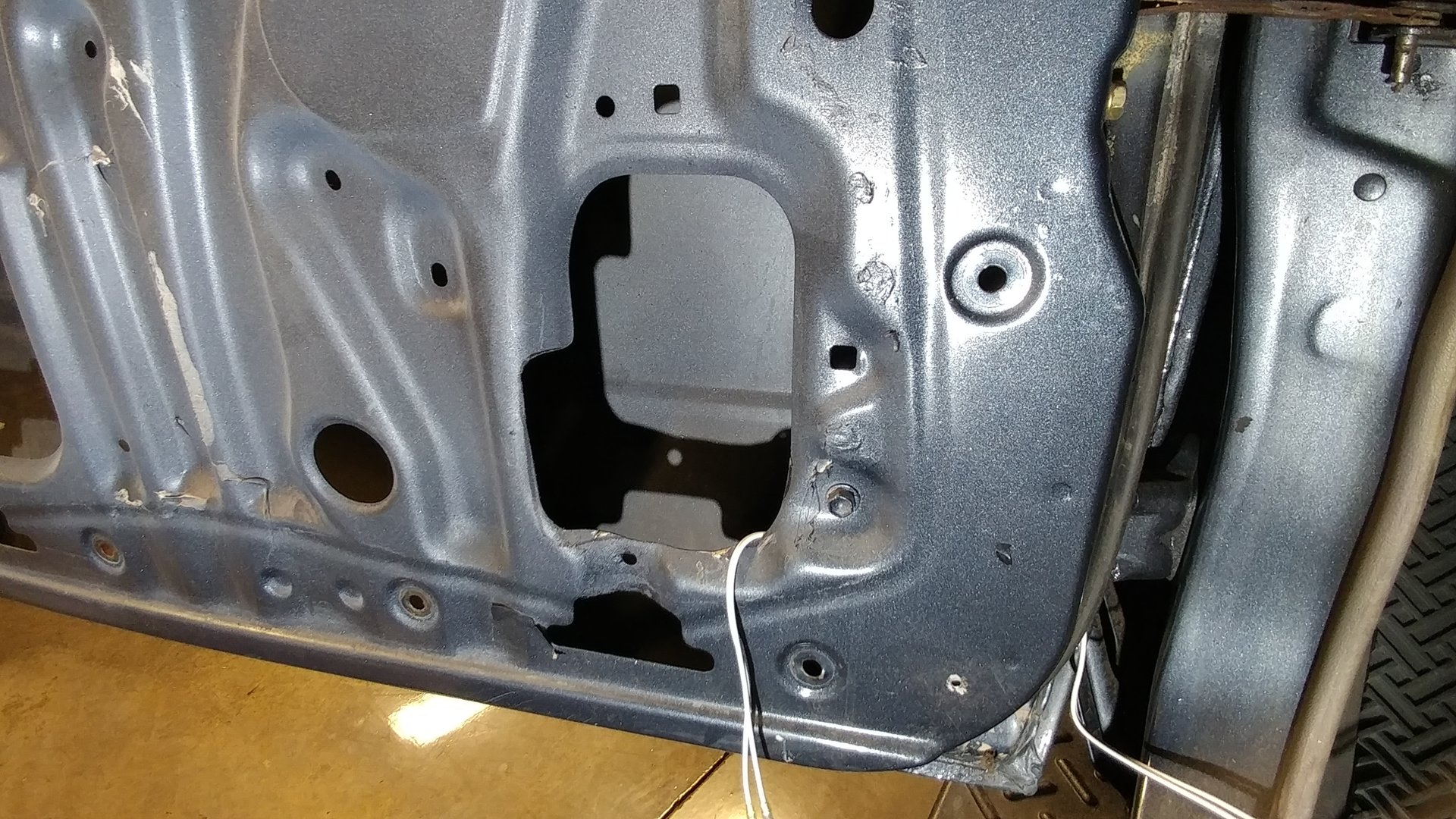 At this point I ran my speaker wires so I could plug in when I assembled it.

My truck had no vapor barriers....I added them. Had some Dynamat(even more proof I'm a closet stereo guy) so I added some of that in the door. I had a guy that worked for me briefly....he was a REAL stereo guy. He made his vapor barriers out of Dynamat. I did that on my 80 and the sound out of those door speakers is amazing. Cool idea. I'm sure all stereo guys know this trick. 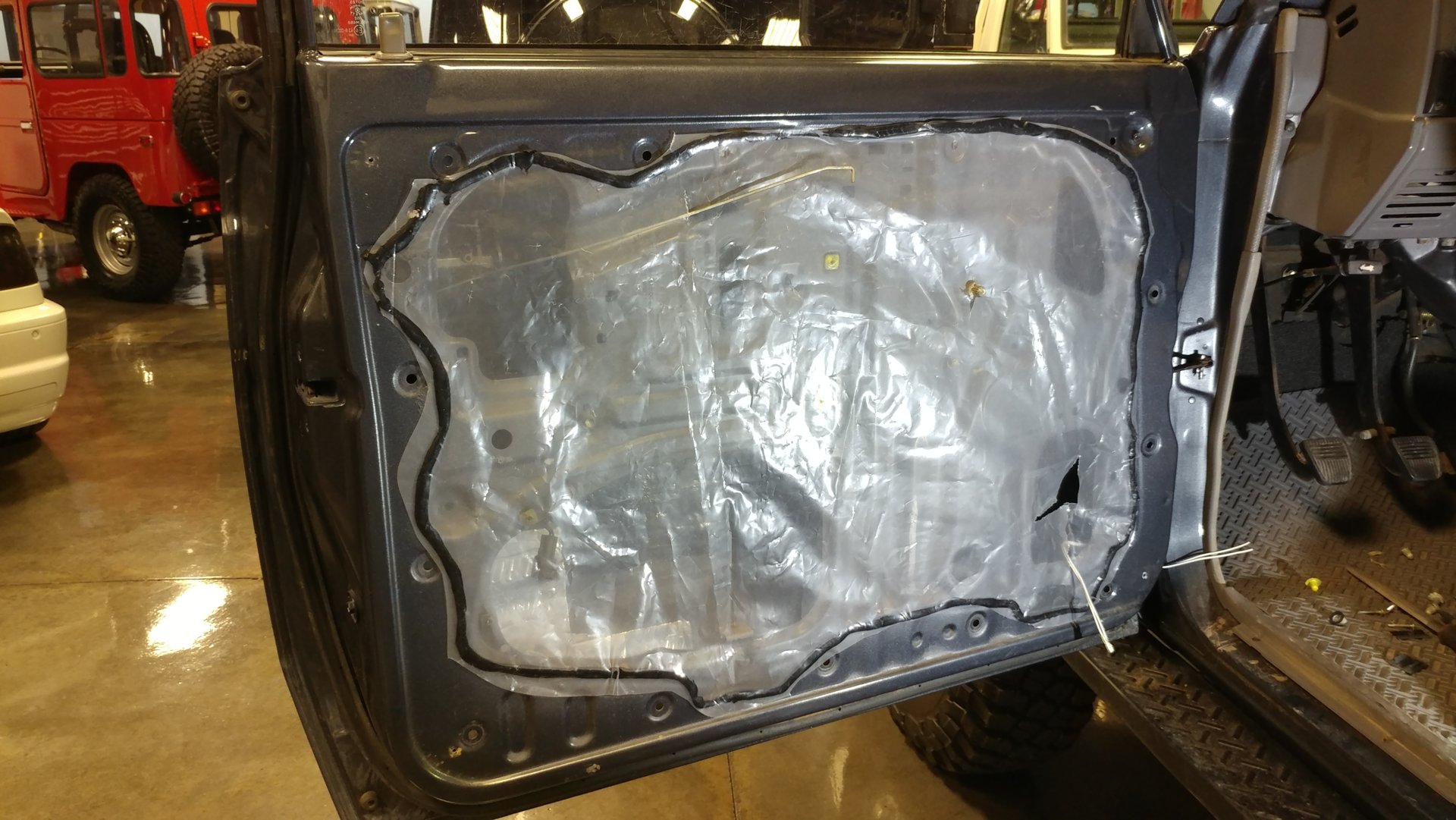 Found what I think is an door lock actuator. No power locks on this rig though. Maybe it had them on it at one time? No idea. Had wiring harnesses in both doors....not plugged in of course. 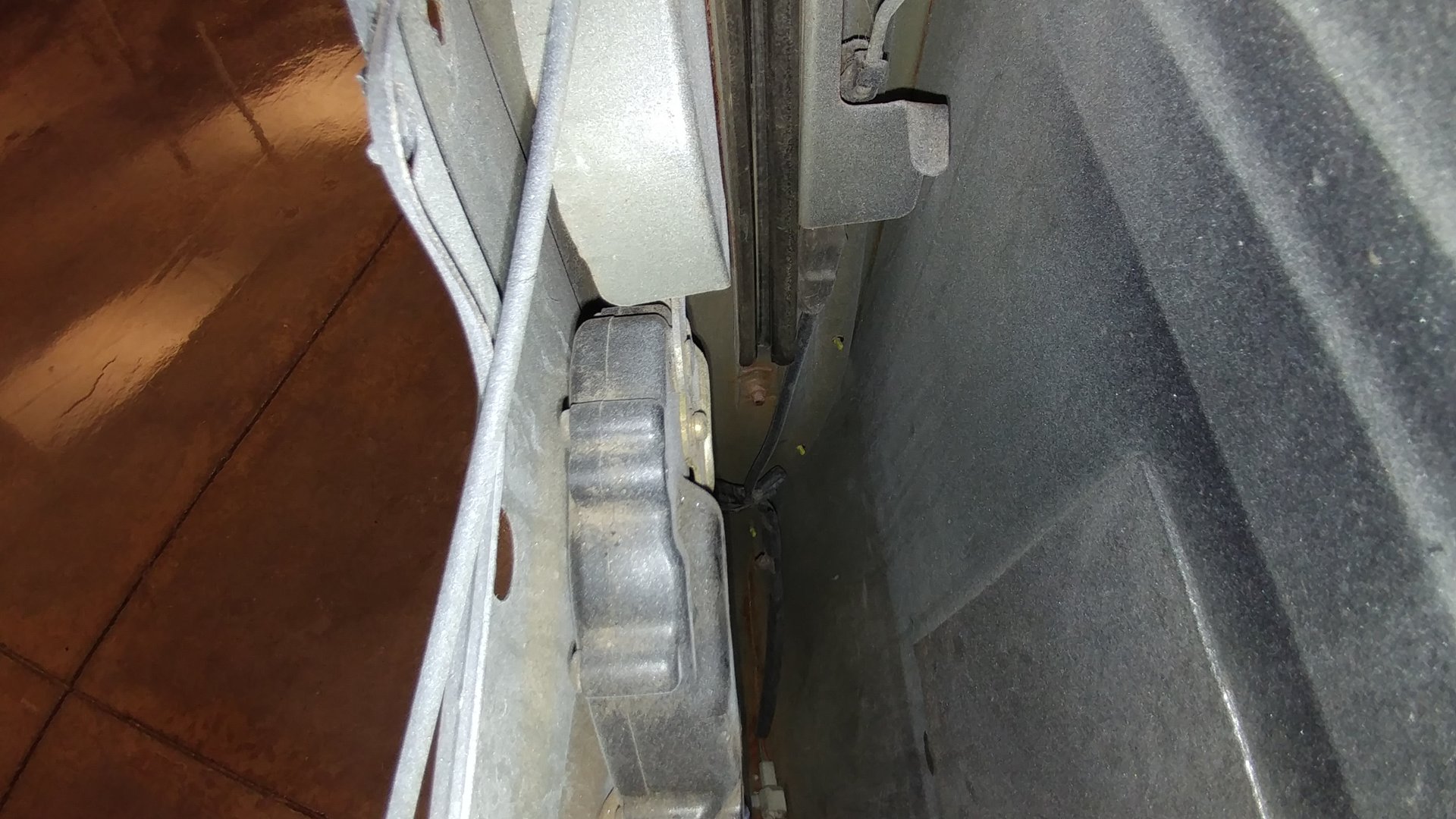 I had purchased all new handles, screw covers, bezels and door winders.....my stuff was old and dirty. This stuff is cheap and easy to get. 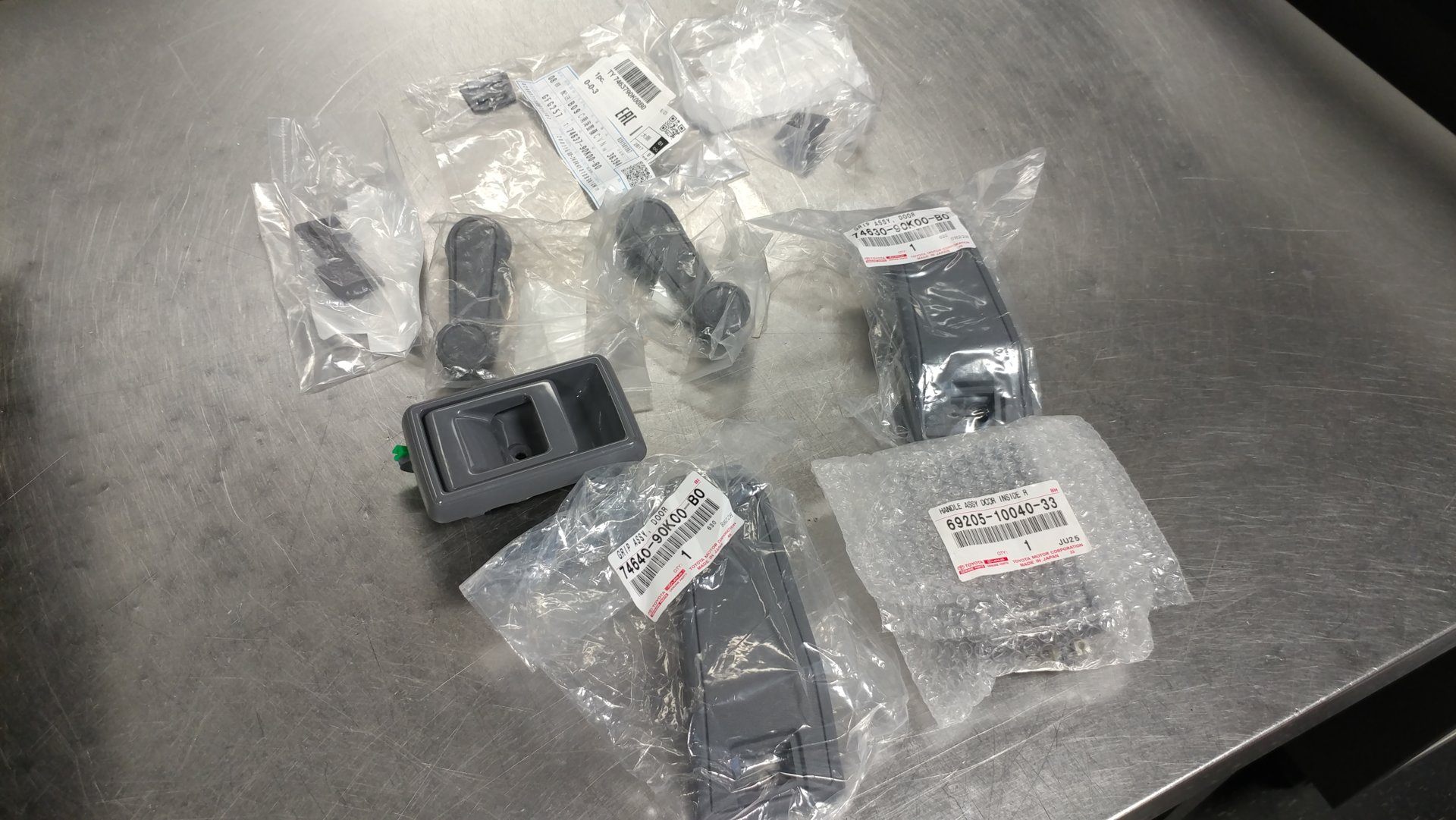 Plugged in speaker wires.....lined it all up and popped it on. Very satisfying to snap in a door panel with new clips.

In this pic, the grill is just pressed in...not fully seated.

I'll post up a follow up on this thread with that process....passenger side needs to be done. I had only bought one grille to make sure it fit. Had to wait a bit for the other one to arrive. 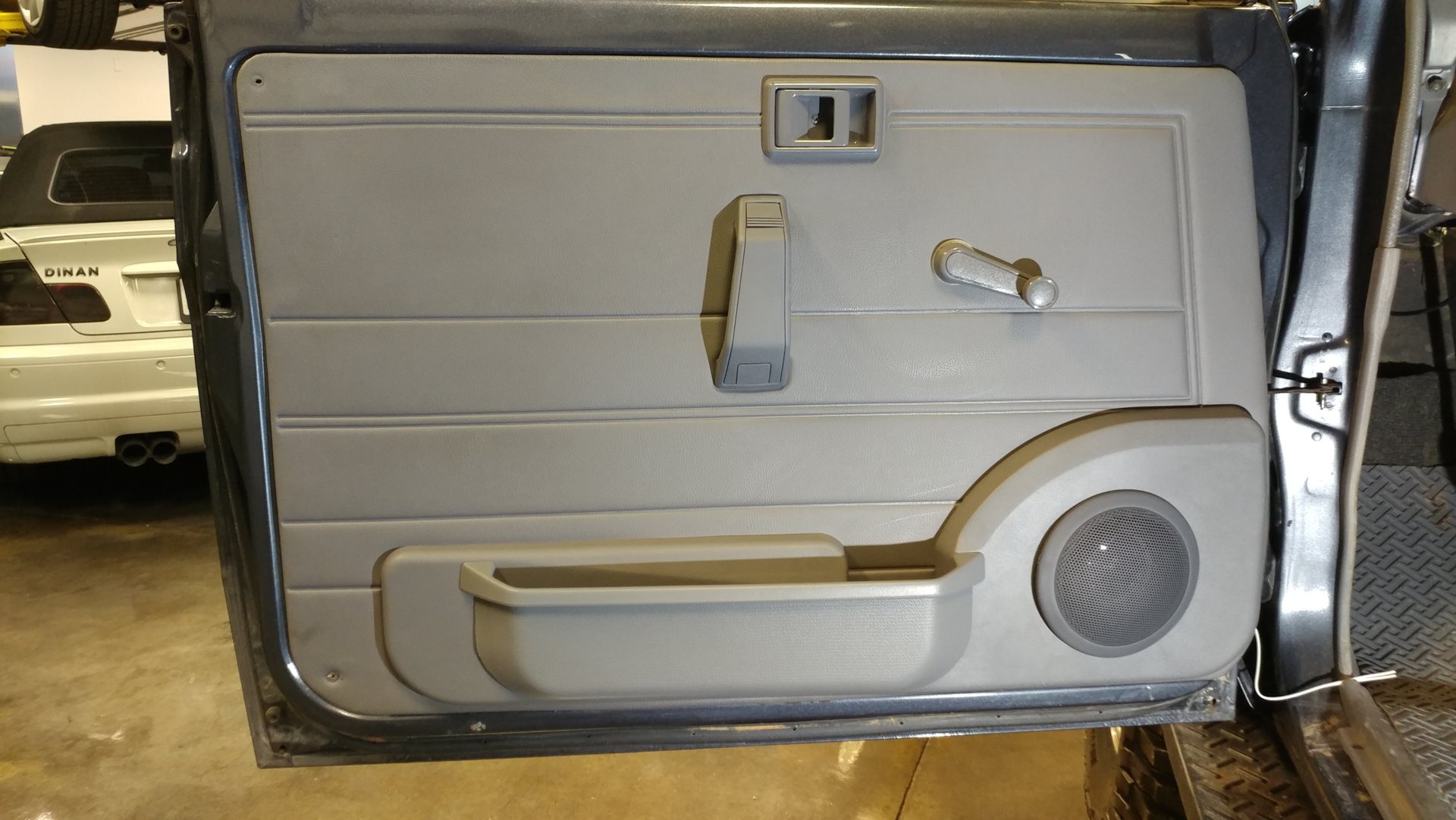 Confirmed....water bottle fits. This is important. 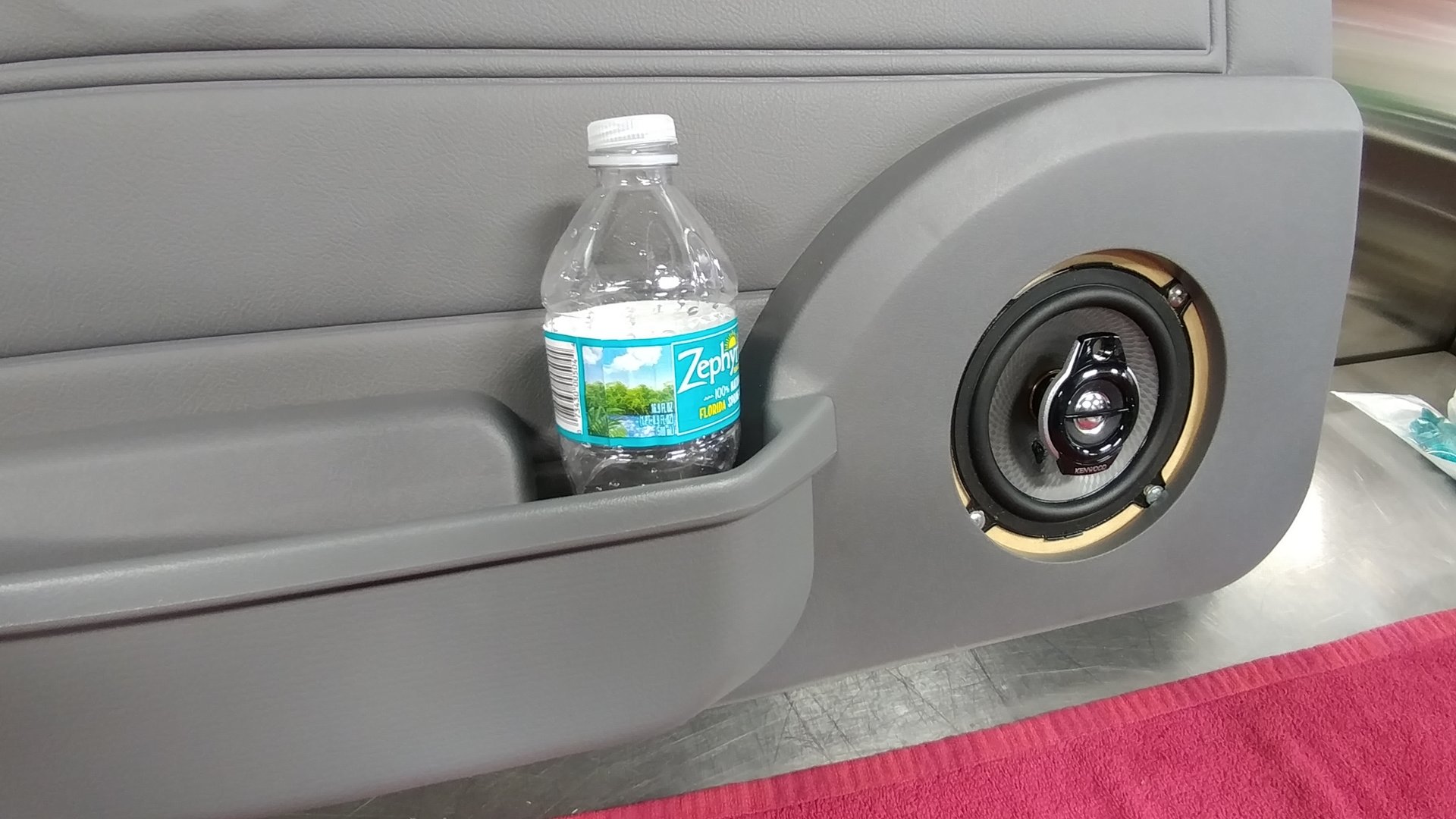 Very nice installation...
Thank you for showing the part numbers for the door handles and opener.
Do you happen to know what the part number is for the plastic door card fasteners ?
1993 PZJ75 R141F

CharlesHS said:
Very nice installation...
Thank you for showing the part numbers for the door handles and opener.
Do you happen to know what the part number is for the plastic door card fasteners ?
Click to expand...

Where are you sourcing those speaker pods from and for how much? I have been wanting to go this route with mine but hadnt seen anyone do an install. Looks god btw.

Where are you sourcing those speaker pods from and for how much? I have been wanting to go this route with mine but hadnt seen anyone do an install. Looks god btw.

I put speakers directly into HDPE door cards i fabricated but less than happy with the results
Click to expand...


I hope to be able to install the pods on my 79 this week....with the bigger 6.5" speakers but still hidden behind the OEM grille. Thinking the 6.5s will sound really good. I bought some shallow mount dealios to test.

howd you run the wires? Can you take a pic of the stock wire grommet location? both door and body? You have prewired goodness, mine does not
Andrew H
1990 Hzj75 Troopy
2004 SASed Nissan Xterra (SOLD)
TLCA #23712

AndrewHadji said:
howd you run the wires? Can you take a pic of the stock wire grommet location? both door and body? You have prewired goodness, mine does not
Click to expand...


I'll make sure that I take some pics of the 79's install since it will be similar to the wiring(lack of) in most of these trucks. My 73 is weird...not sure what it had in its doors but it was easy to run wires.

AndrewHadji said:
howd you run the wires? Can you take a pic of the stock wire grommet location? both door and body? You have prewired goodness, mine does not
Click to expand...


Got around to the 79 series yesterday....this is where we popped a hole in the cab to feed the wires out to the door:

This is the driver's side with the kick panel removed. We drilled an 1/8" pilot hole in that middle square, then drilled for the appropriate grommet. Fed the wires thru and all is good. Just noticed that in this pic you can see the whole just peeking out behind that weather strip. This is a different whole from where the instructions say to go. 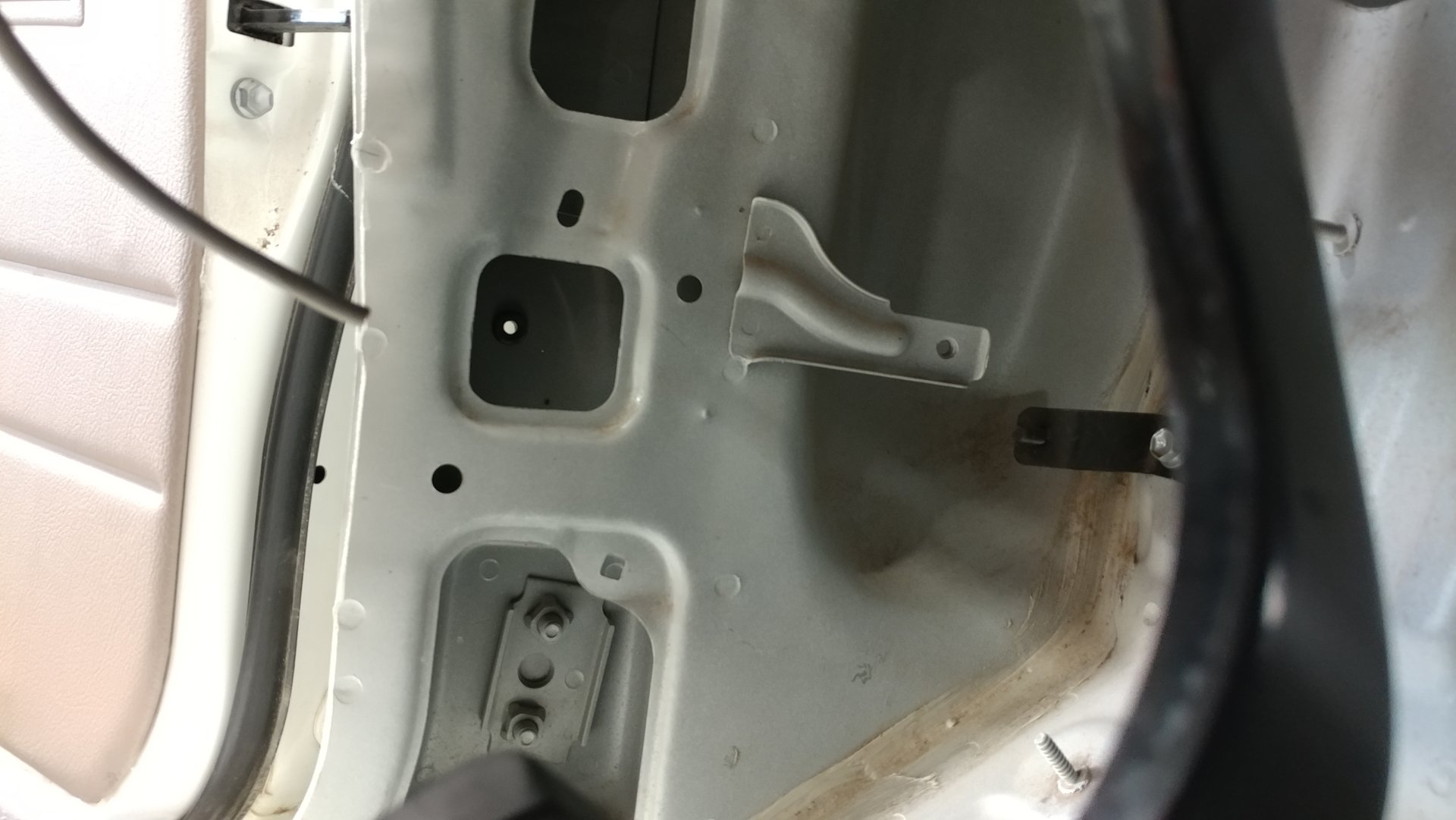 Close up of the whole with grommet: 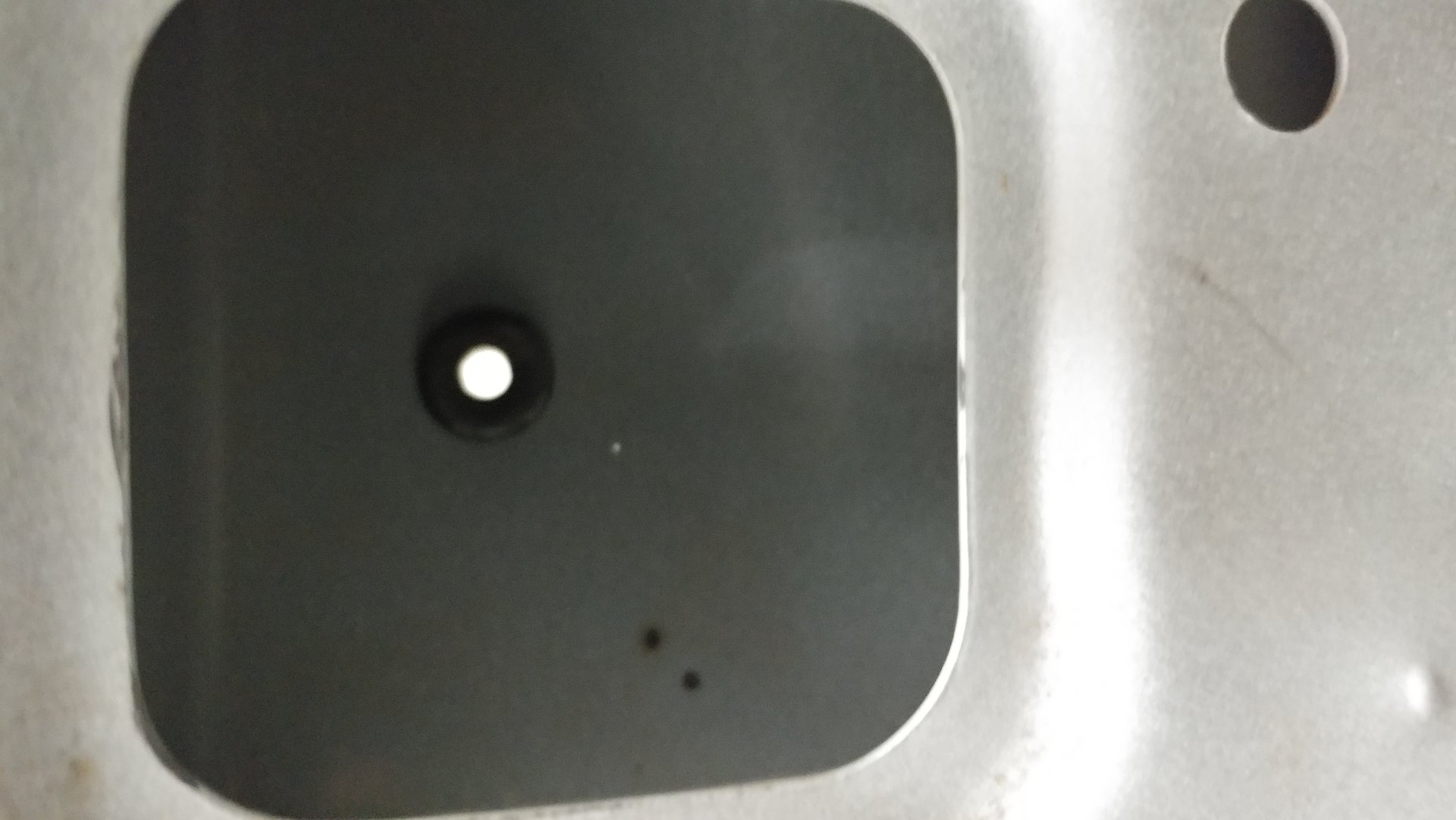 Used a tech flex braid to cover the wires....

You can see the bottom hole that can also be utilized. I would bet that not all trucks have that upper hole in them like what I used. Seems only the bottom one is referenced. 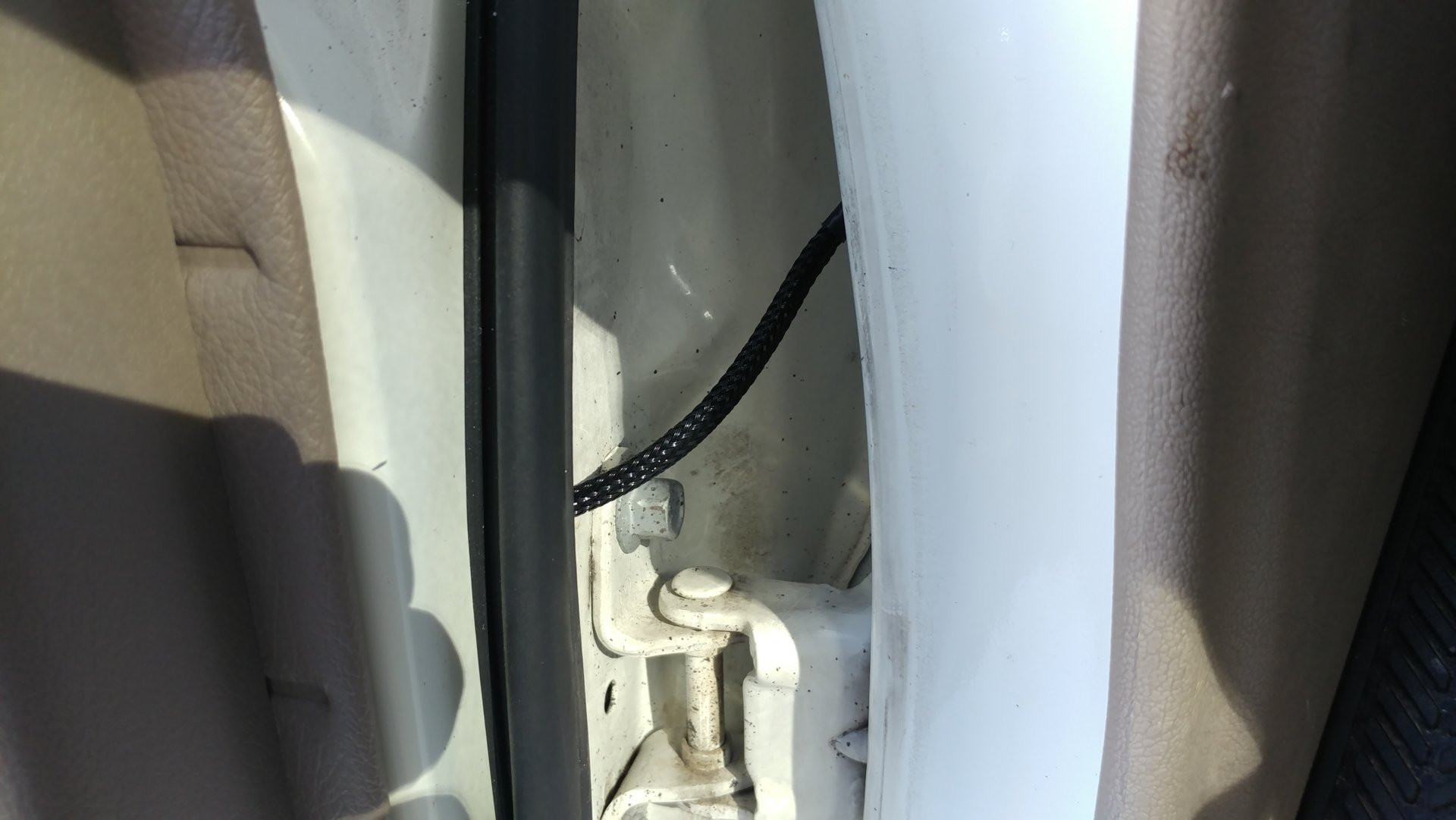 L
Removing snorkel without breaking it