77CruiserDog said:
After my lift on Falcor I put in 4 degree shims and it made a world of difference. No more random wandering on slightly tracked freeway sections, return to center felt better and virtually zero bump steer. I really like the ones that Valley Hybrids offers, they're super high quality.
Click to expand...

Hokie LX said:
Some pics from the rebuild.

Seems to run alright. Going to get a vacuum gauge to dial in the tune as much as possible. It's amazing how much better the driving experience is with the H55. So much better on the highway and around town. GPS was 85mph here and it was cruising happily with more in her.
View attachment 3018107


Also snagged one of the Napa tire trash bags to try out for GSMTR this year. At $28 it's hard to not give it a try. After all, it's just a trash bag. Seems well built. Good quality straps and clips, drainage holes in the bottom, cinch cord on top of bag, side and front pockets for extra bags or other things. I picked up an awning as well for $85 but will try that out later as I don't have a rack yet. It may go on my motorcycle race trailer until a rack gets added to the 60.

I also picked up a gas can as well to carry some extra fuel.
View attachment 3018109
Click to expand...


Link to that bag?

Already ordered from the wonderful team at CB/VH along with some longer pins. Just got my shipping label actually

HemiAlex said:
Link to that bag?
Click to expand...

It was $28 with my AAA discount. Holding it in my hands, it feels solid and a fantastic deal for $28. Will report back on how it holds up after a week at GSMTR.

Few updates as of late. Been busy getting the truck ready for GSMTR next week.

Completed my desmog with a new BVSV(1) valve from Toyota and plumbed it in. I also replaced the carb secondary diaphragm after talking with @mattressking and it's a good thing I did. My old one was very hard and didn't move too well. When I had it apart originally, I figured that's how they were since the carb was "recently rebuilt" but again, it wasn't really rebuilt, or it was poorly rebuilt. @mattressking also was talking to me about the mechanical opening spec for the secondary and I adjusted mine there also. Mine only opened 1mm mechanically and so I adjusted it to 2mm. I haven't driven the truck yet but between that and the diaphragm change, the truck should drive a lot better! 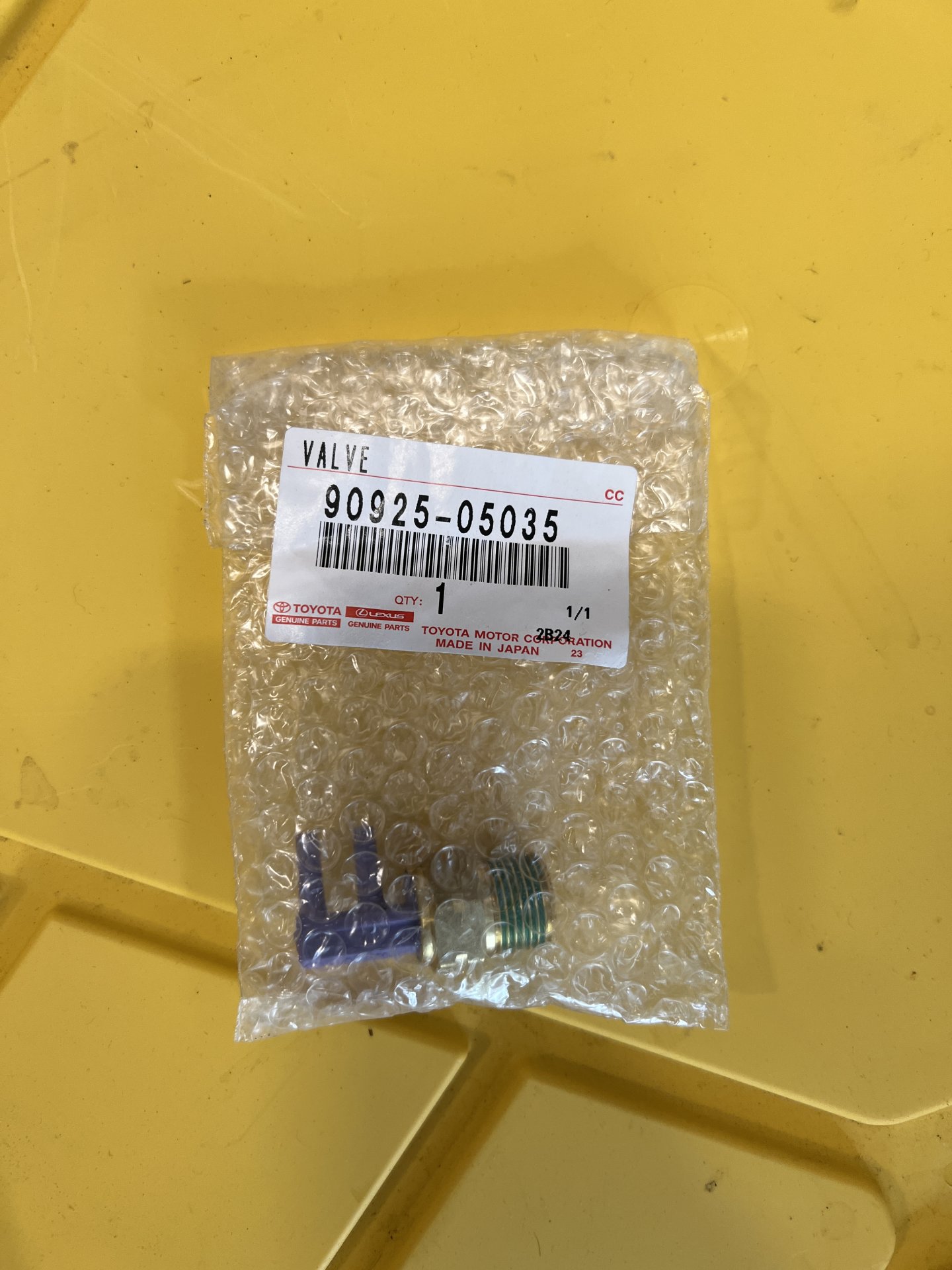 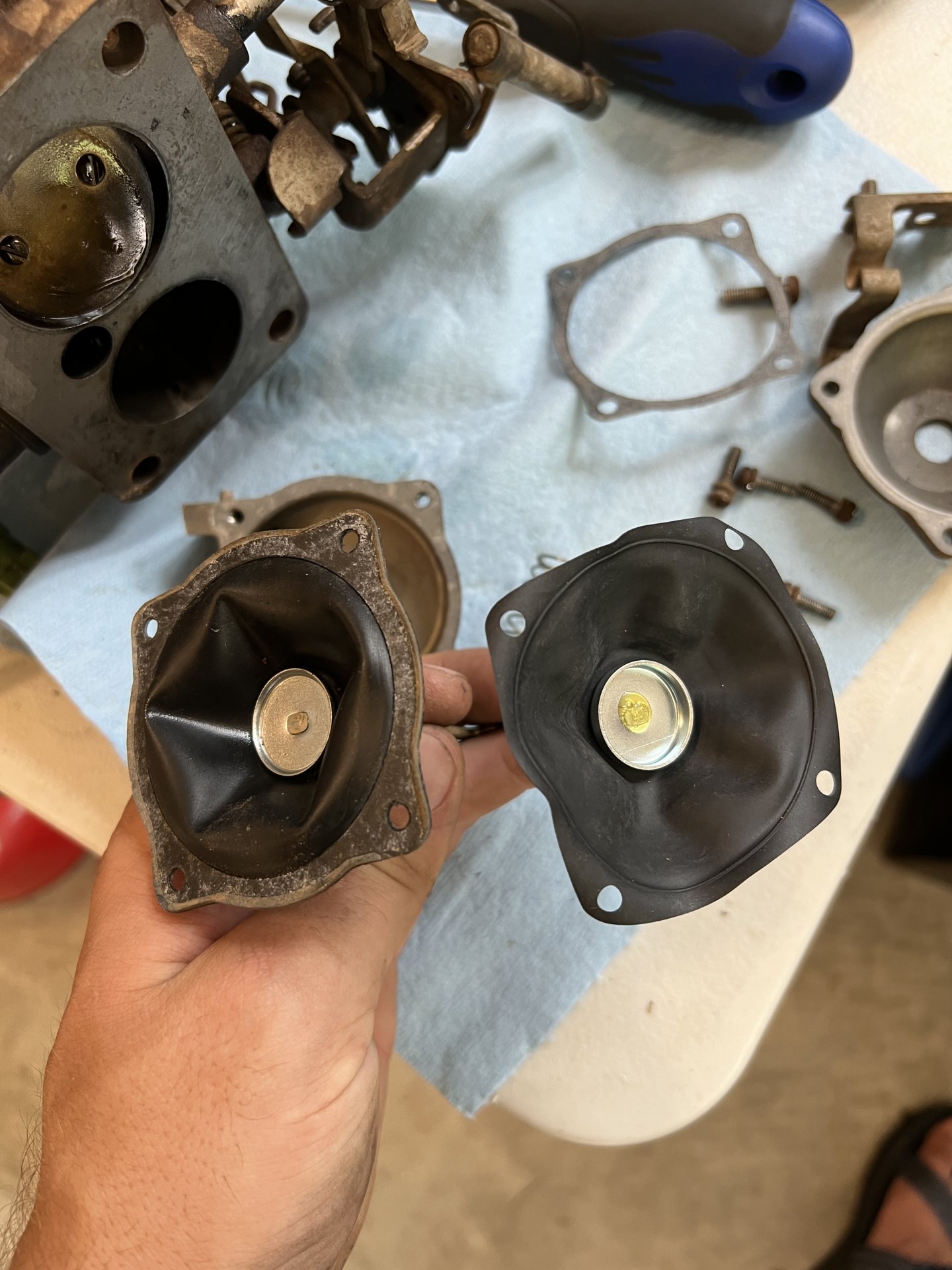 Then worked on finally wiring in my fuse block and other items. I have a M8000 winch and couldn't find a good amperage rating online so I wired it to through a 250A breaker. If it keeps tripping, I'll change it for a higher rated piece.

I used the @CruiserTrash bracket which is a great piece! 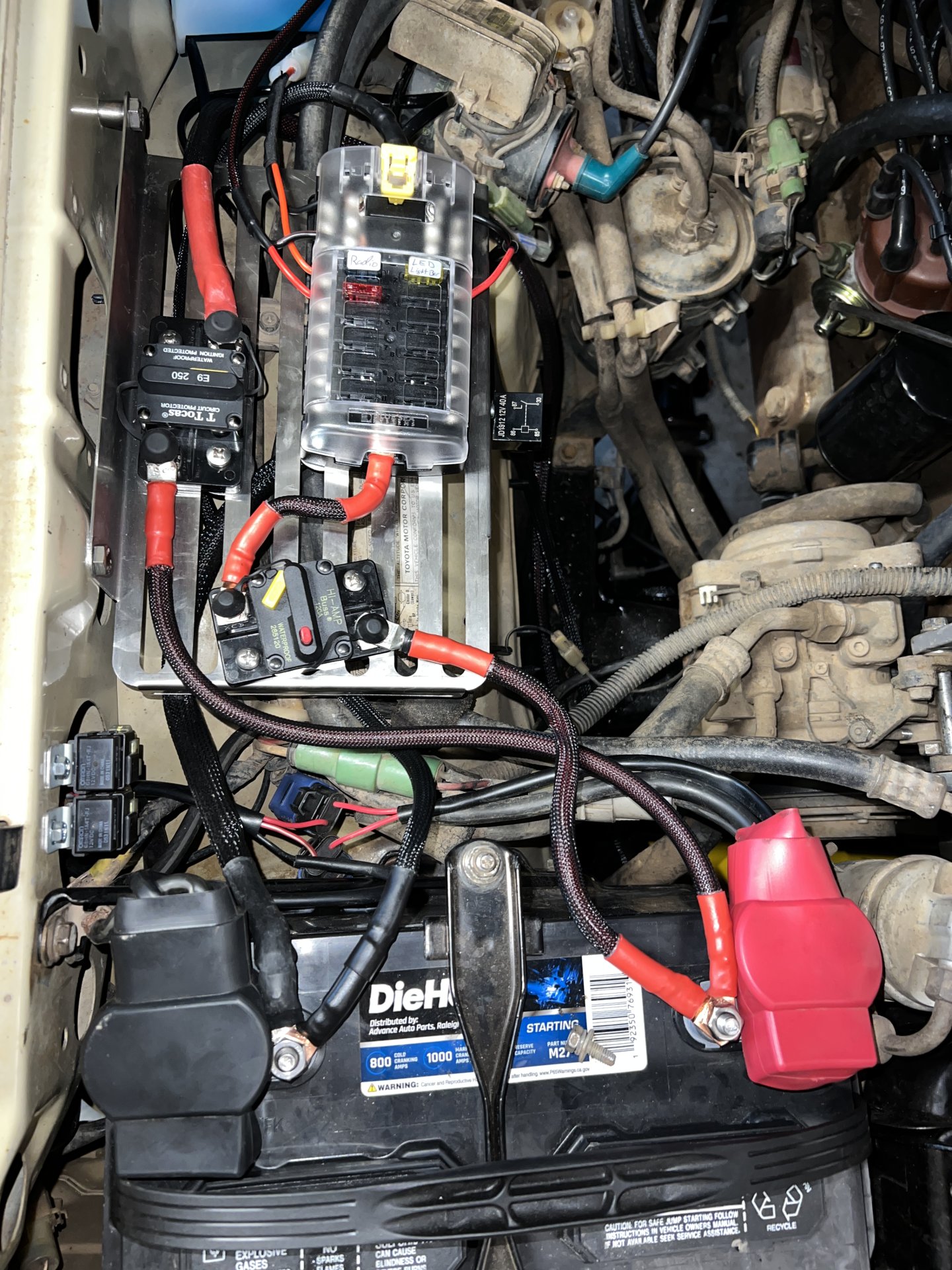 Then I added a *gasp* light bar 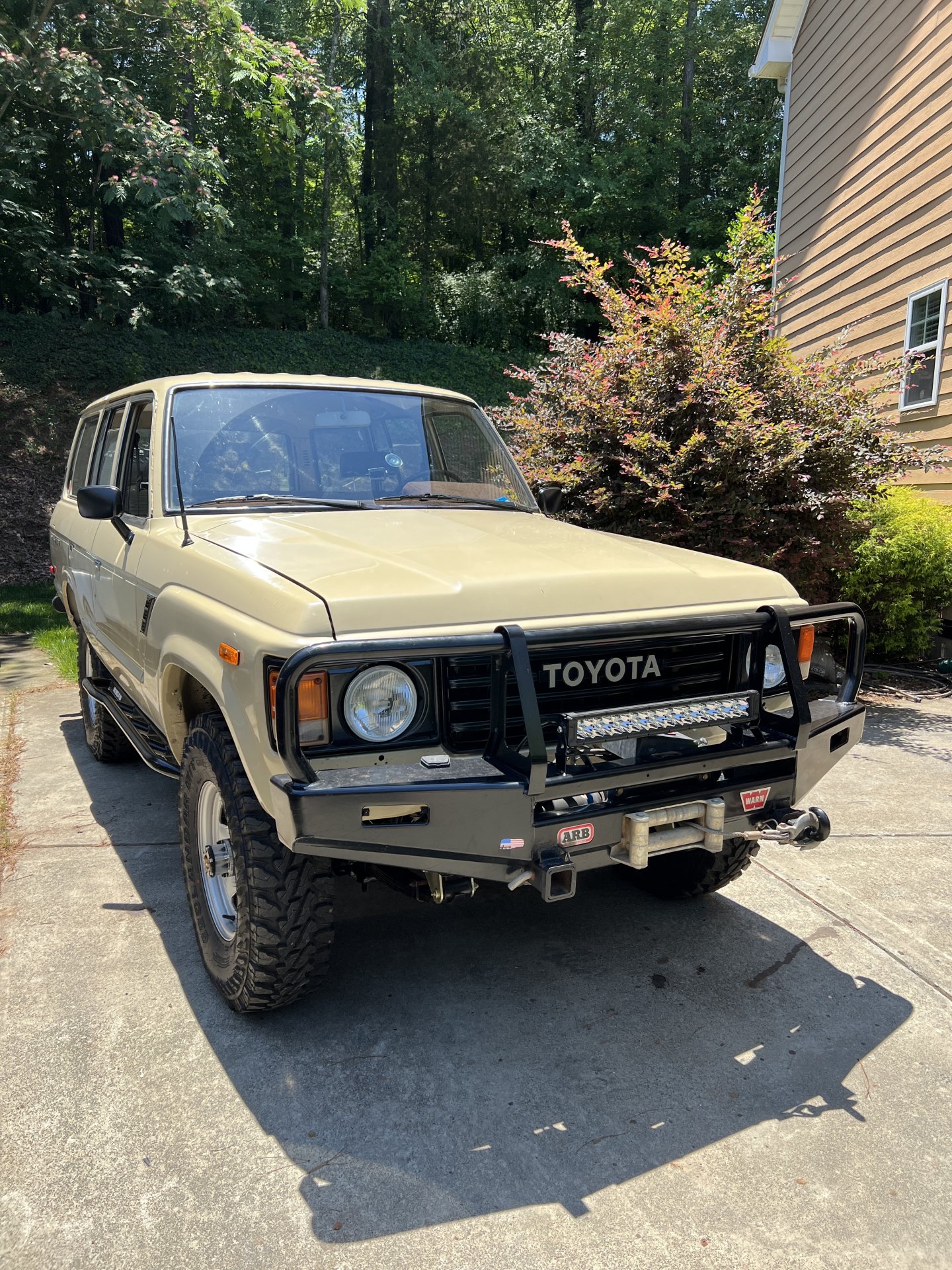 The light bar took the place of where the winch controller was mounted so @GLTHFJ60 was kind enough to cut me a relocation bracket on his plasma cutter. (Just test fitting here, yes there will be 4 bolts) 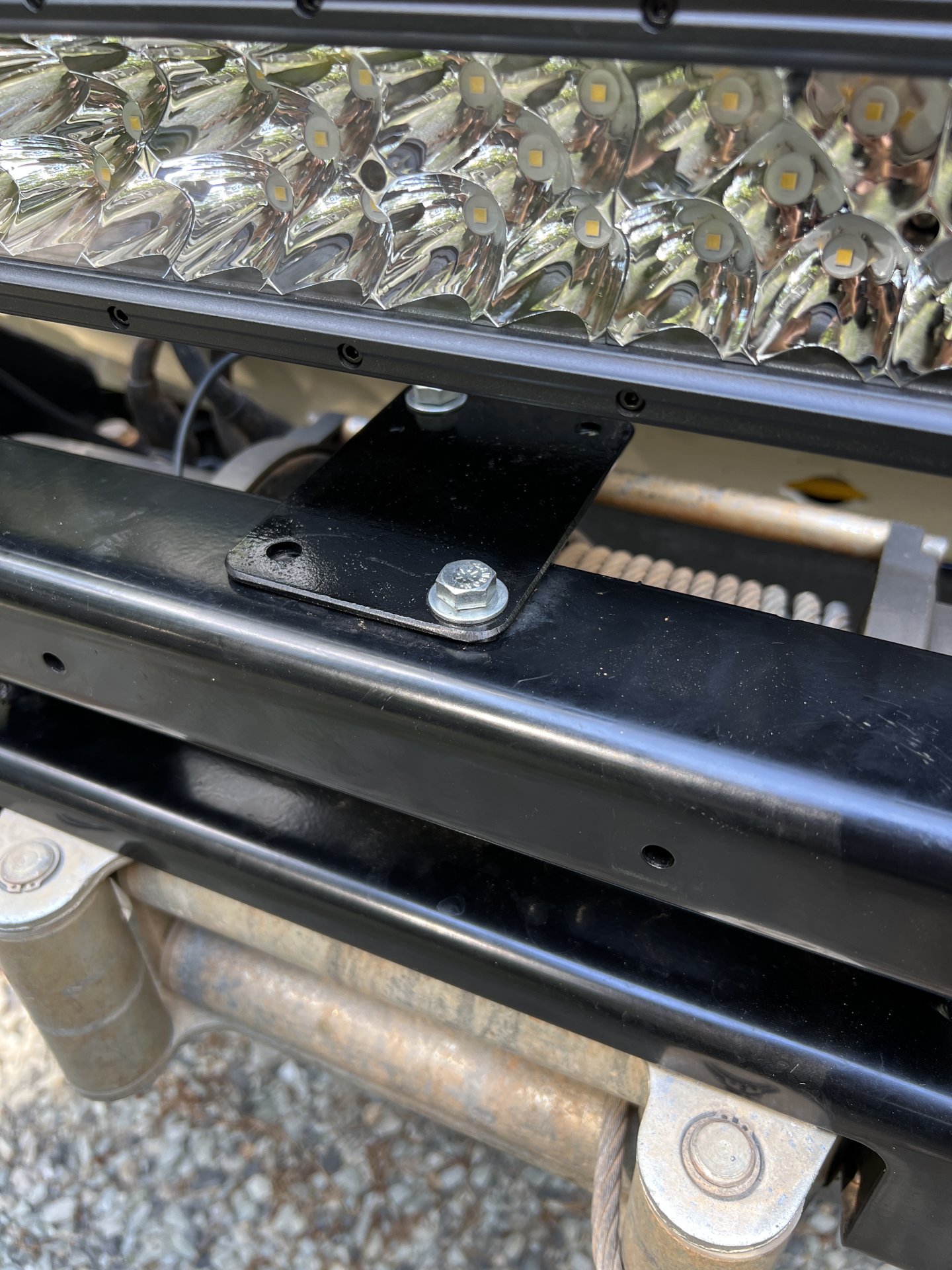 Added a Cruiser Head switch plate from @ChaserFJ60 to the ash tray cutout. Then I wired in some USB ports to replace the old cigarette lighter receptacles which were tacked onto the bottom of the dash. I also added the light bar rocker. 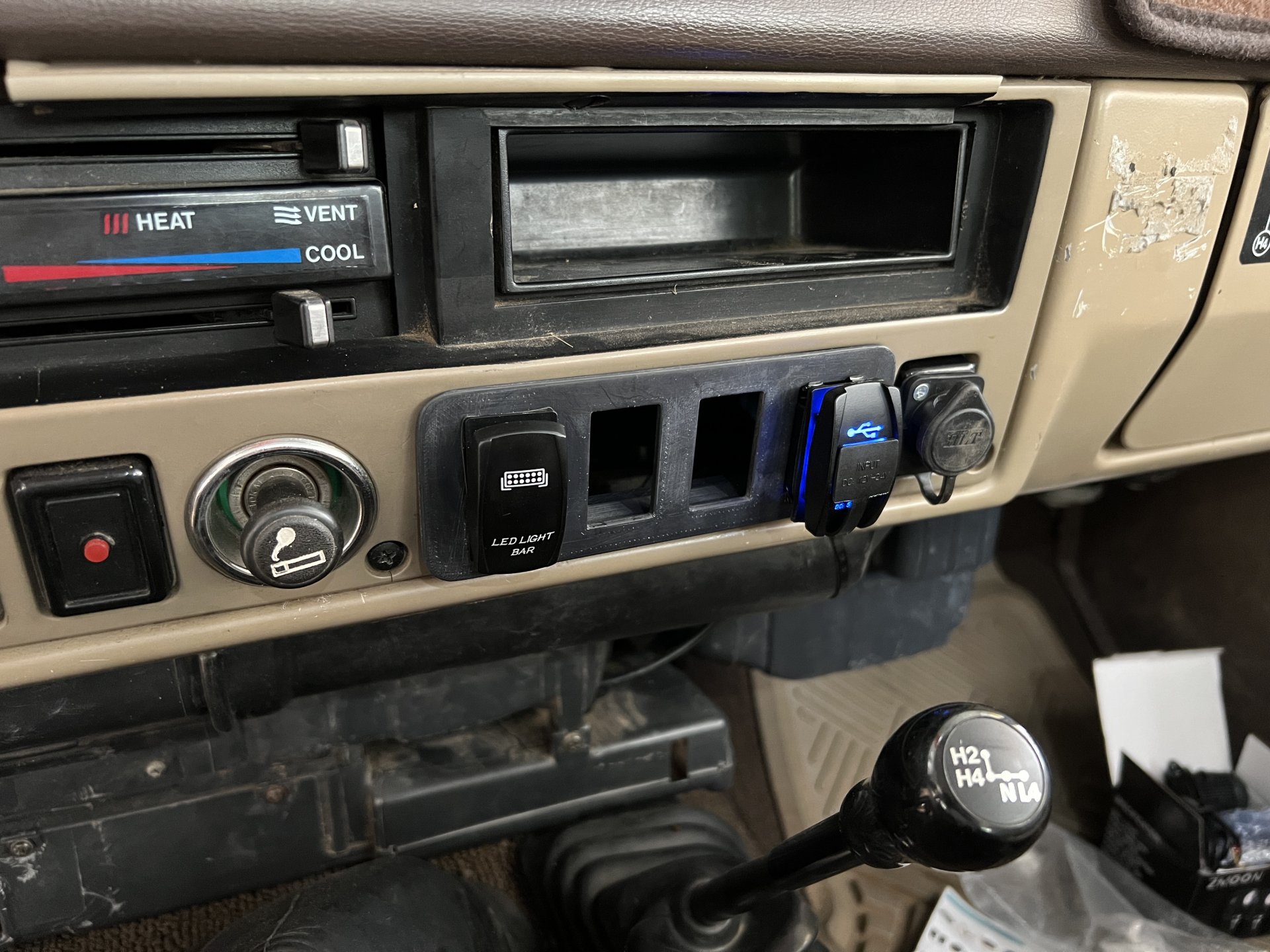 I then wired in my 40W Midland radio. I ran a RJ45 extension cable up to the dash so the handheld can be mounted easily on the dash and unplugged when not being used to clean up the interior a bit. 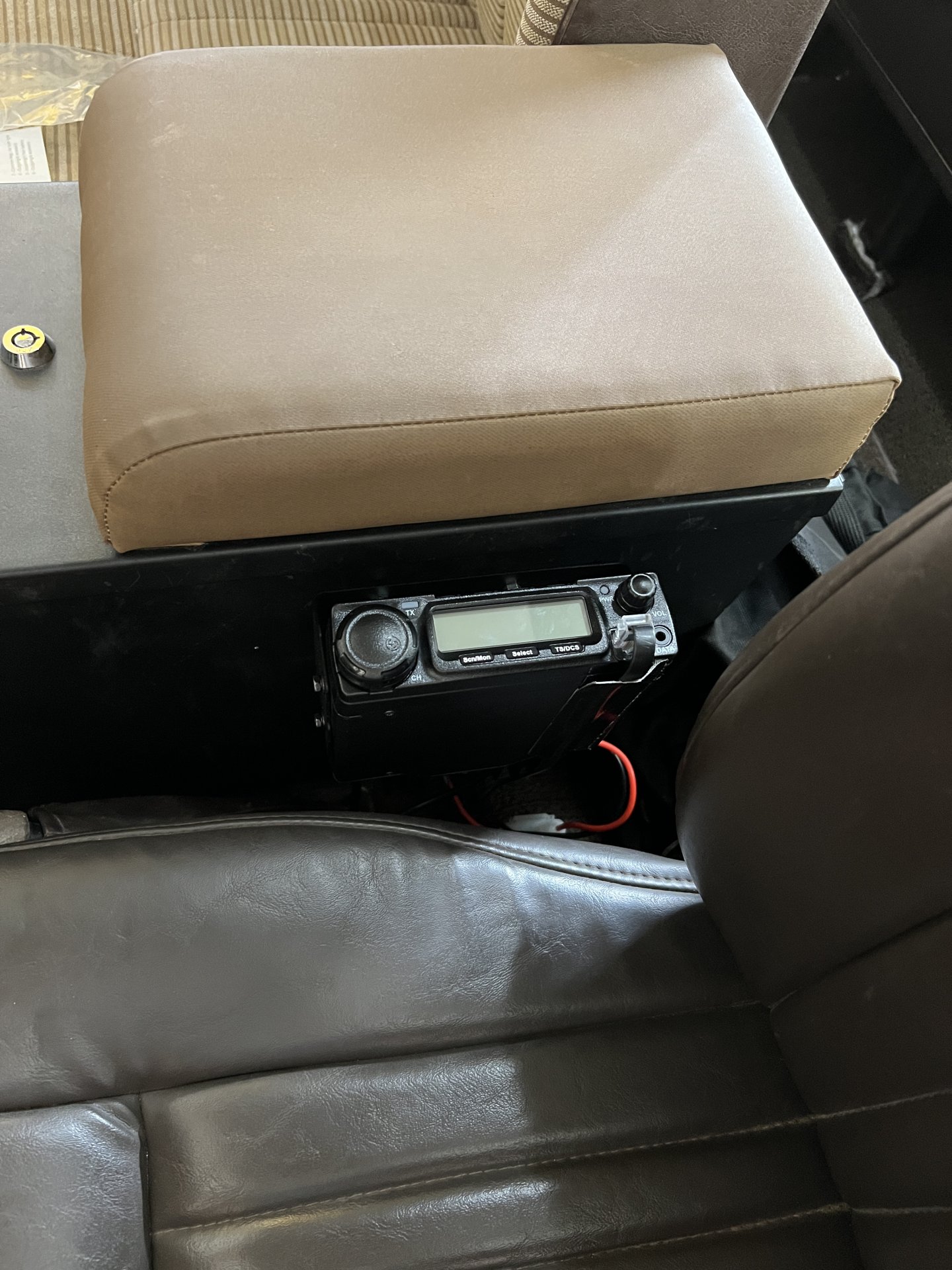 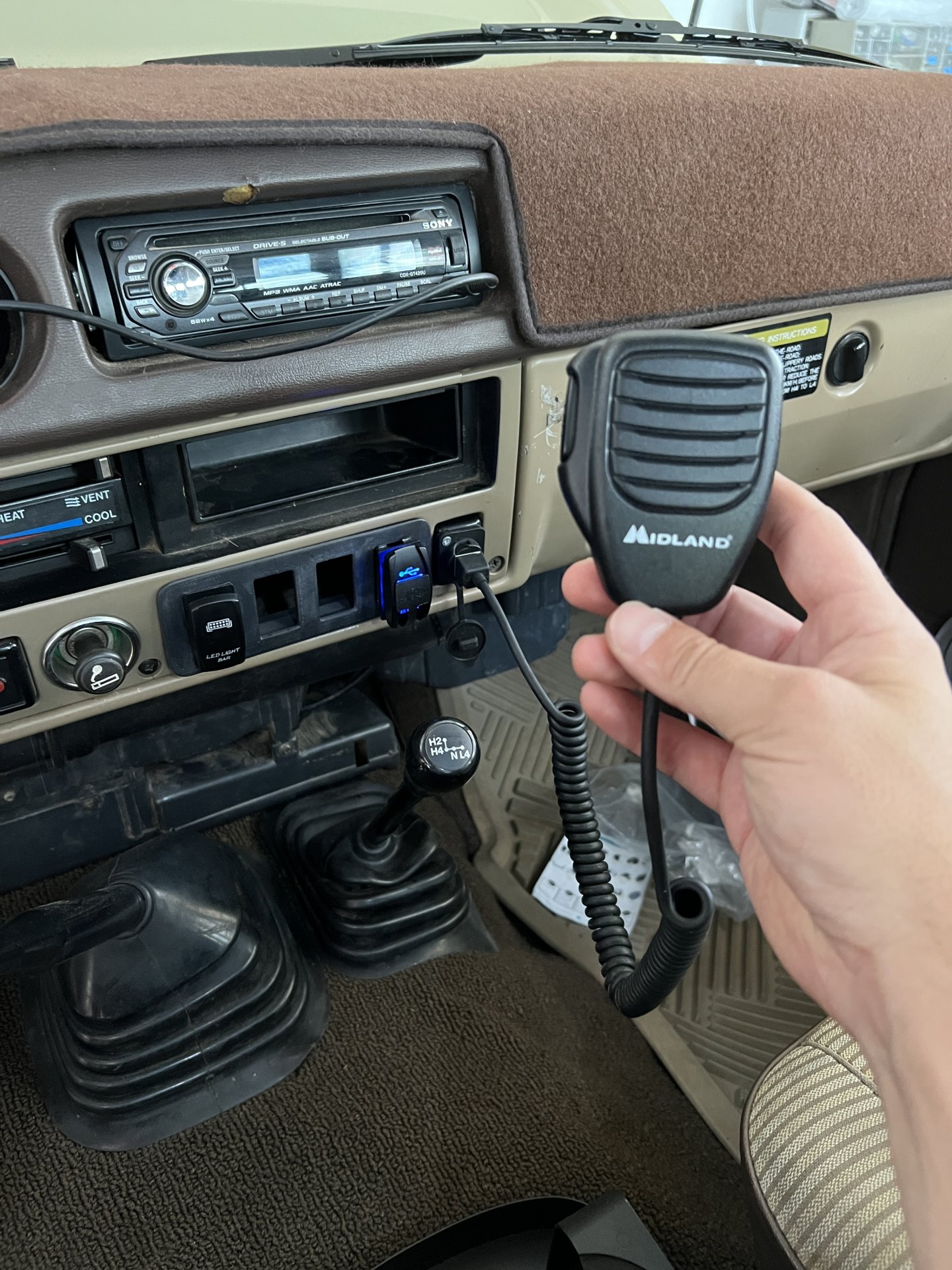 I still need to clean up and tuck the wiring for some items but it's all in now! 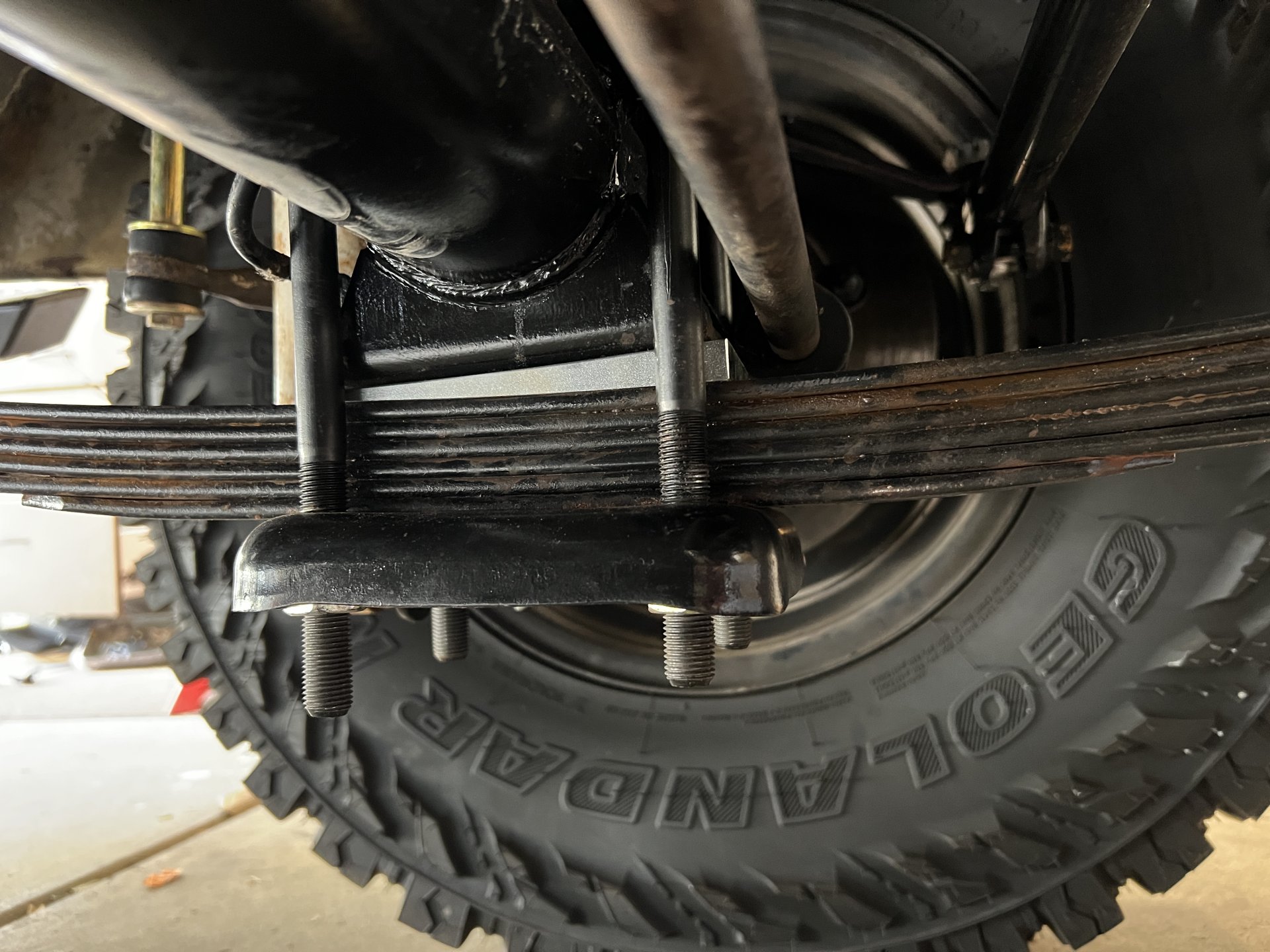 @Hokie LX glad the bracket worked out for you. PM me some feedback if you get the time.

How’s it drive with the shims?

77CruiserDog said:
How’s it drive with the shims?
Click to expand...


I just drove it to an event this evening and it definitely tracks better with much less input needed side to side.

Hokie LX said:
I just drove it to an event this evening and it definitely tracks better with much less input needed side to side.
Click to expand...

Got the truck converted from R12 to R134A with new o-rings and a fresh charge. Prior to doing this, I verified the compressor engaged, idle up worked, and the light on the dash worked. However, I don't think there was enough pressure in the system to activate. After the charge and conversion, it works great! 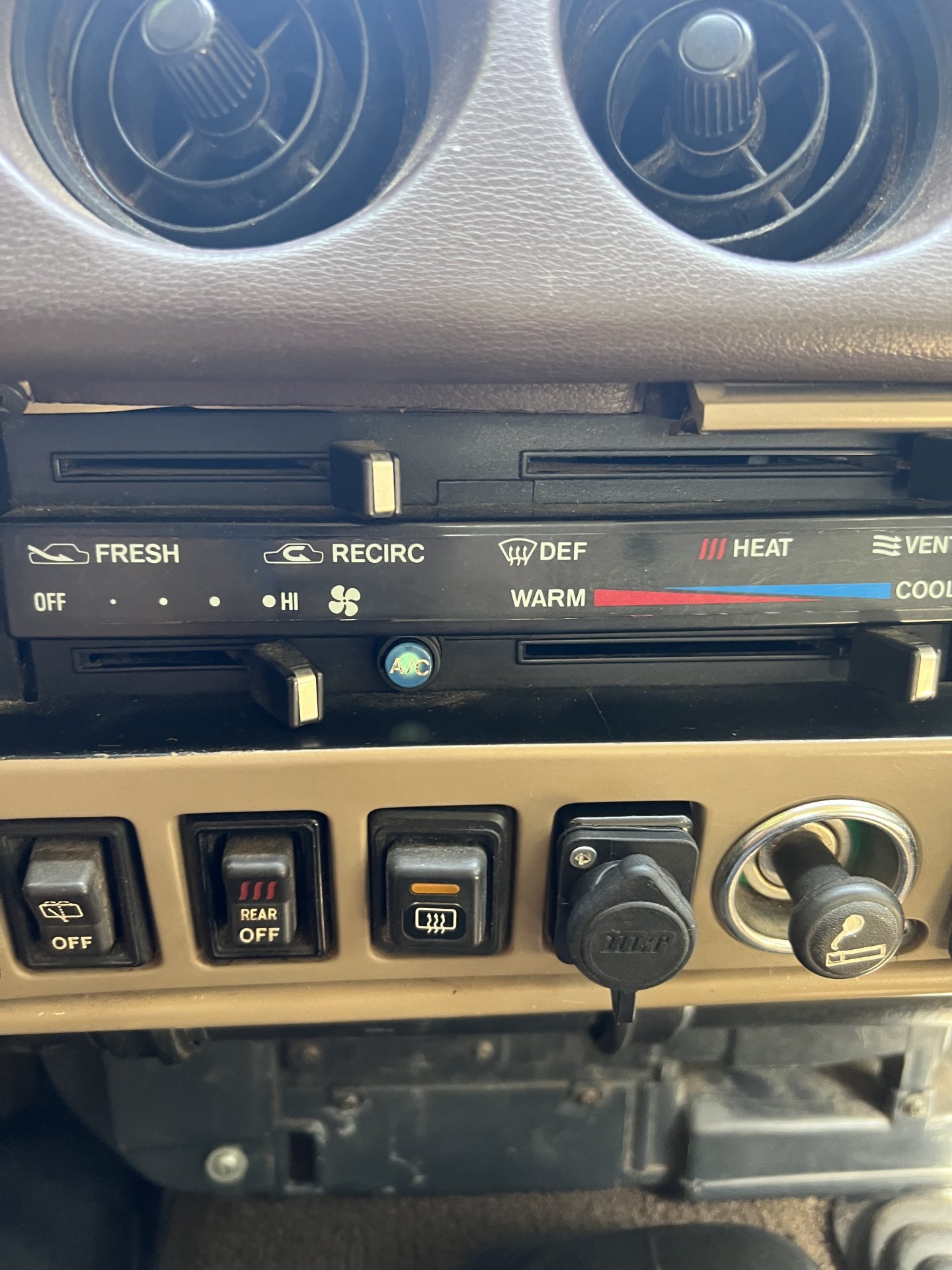 First road trip in the 60 since redoing basically every system in the truck. Road tripped 400 miles to GSMTR and truck ran great at 70+mph. Ac works well enough but I may do an electric fan to help it out since it’s still not working as well as it could be but then again it was 100* today.

Also built a rear platform/drawer setup for the trip. One big drawer and dedicated cooler/fridge spot. The board behind the cooler is another compartment as well. Gave it a coat of stain and called it a day. Still need to find a way to do an extended platform to sleep on but that’s a project for when I get back. 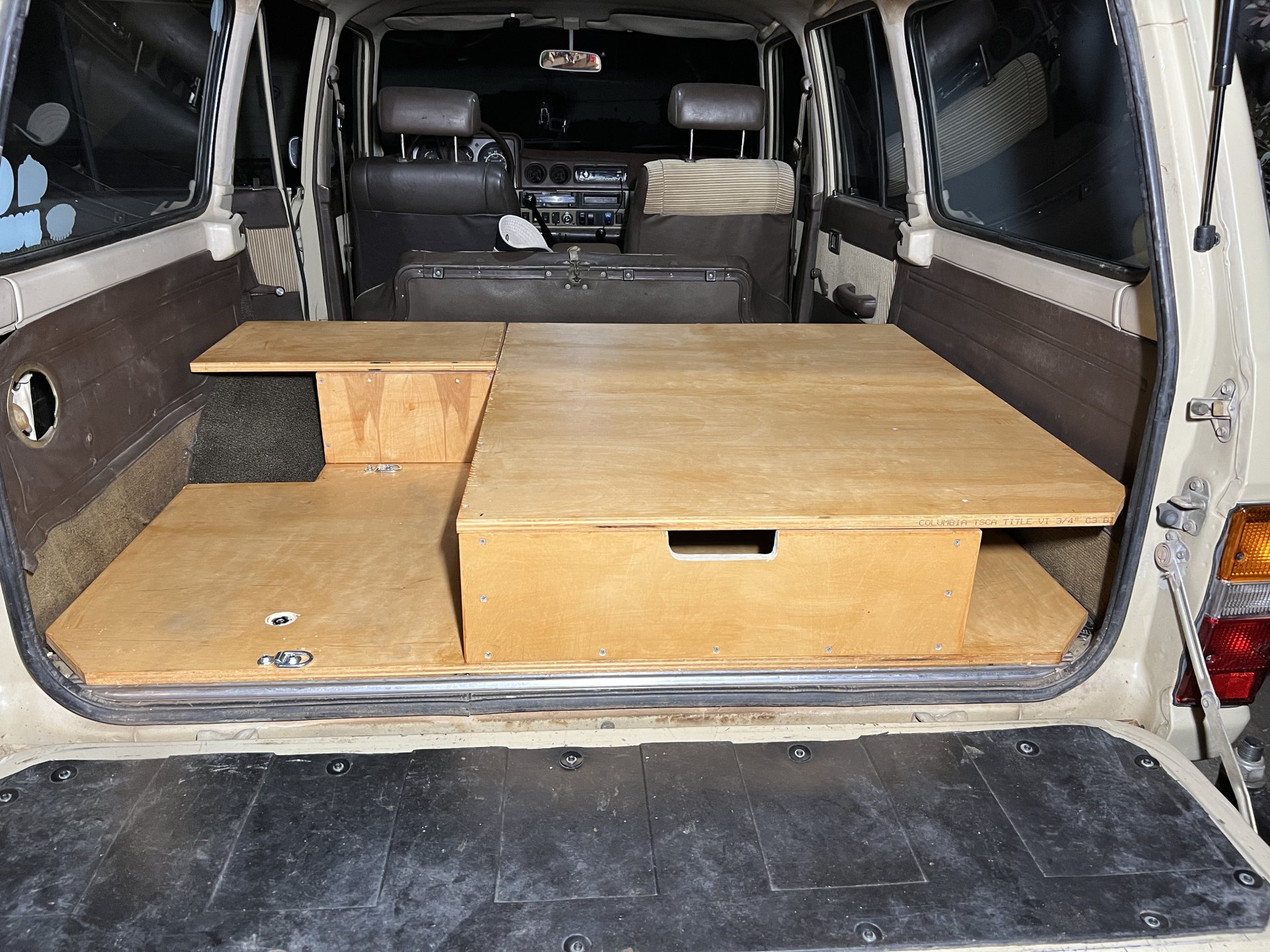 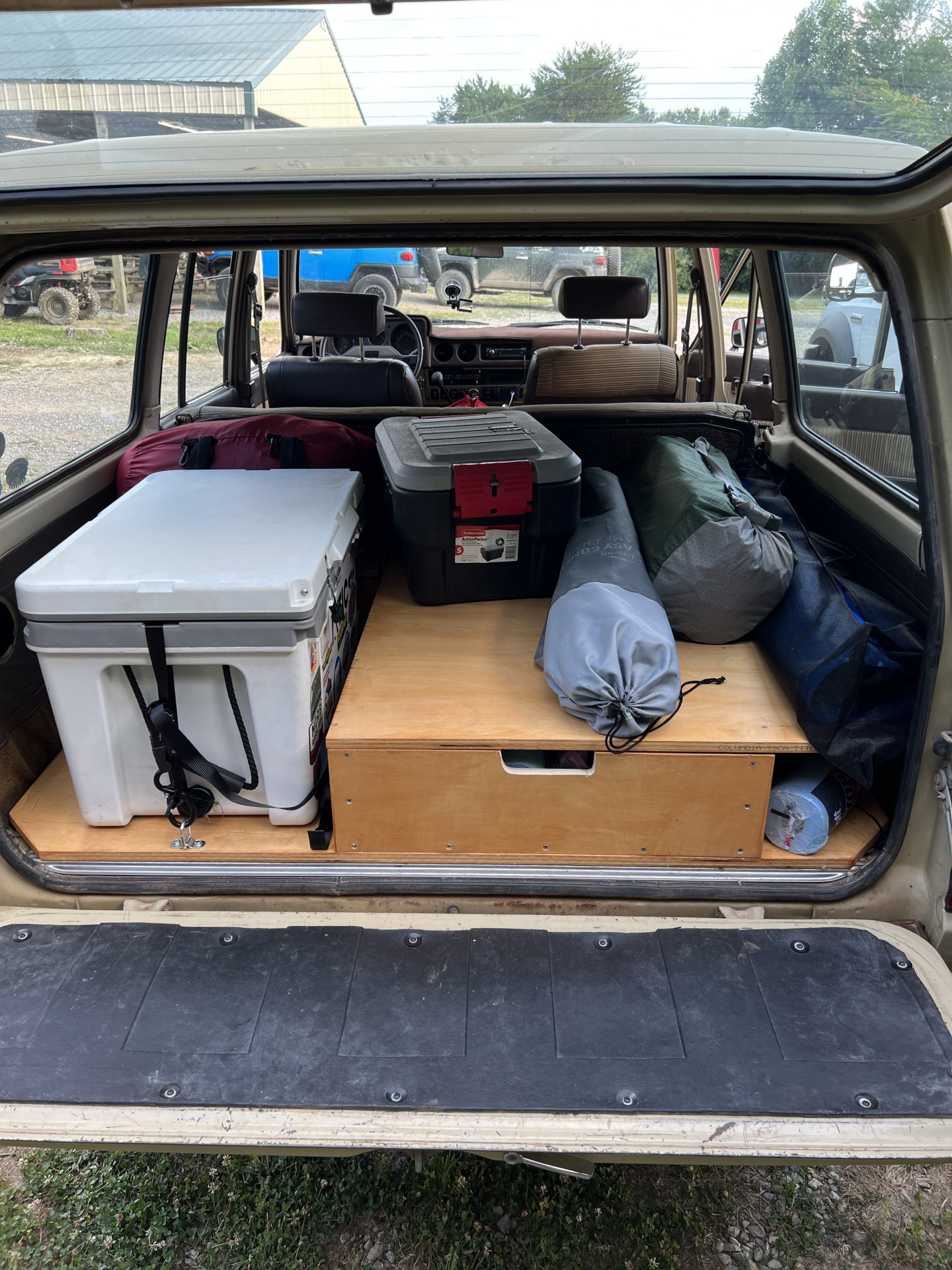 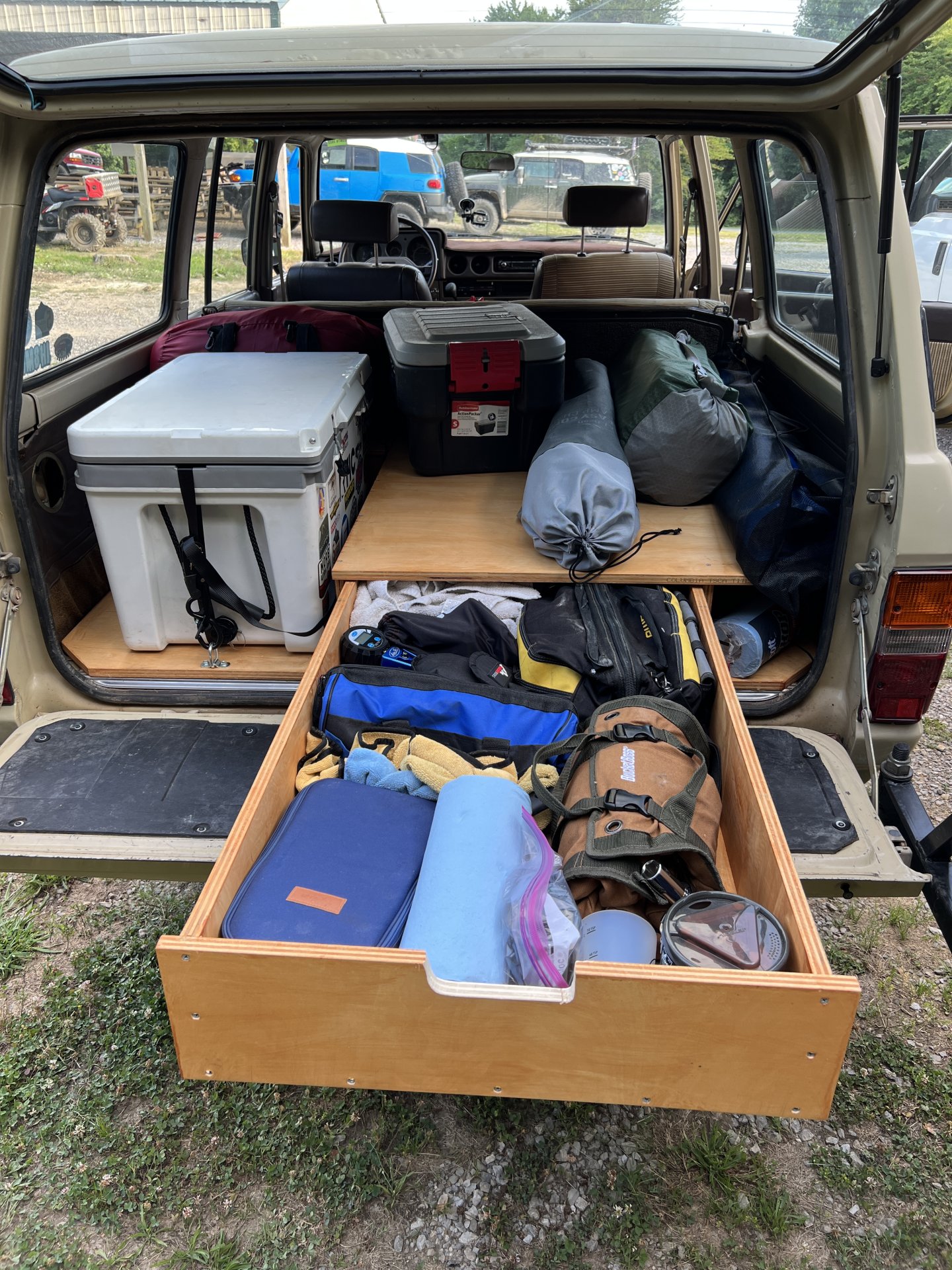 Day 1 wheeling the truck was a success. With having every system of the truck apart over the past couple months I wanted to do a couple shakedown trails and make sure everything was good to go.

@GLTHFJ60 and I went out and did 2-3 trails and the truck did great! Only issue was a clogged rear diff breather which was an easy fix.

Excited to get more trail time under my belt in this truck as the week goes on. 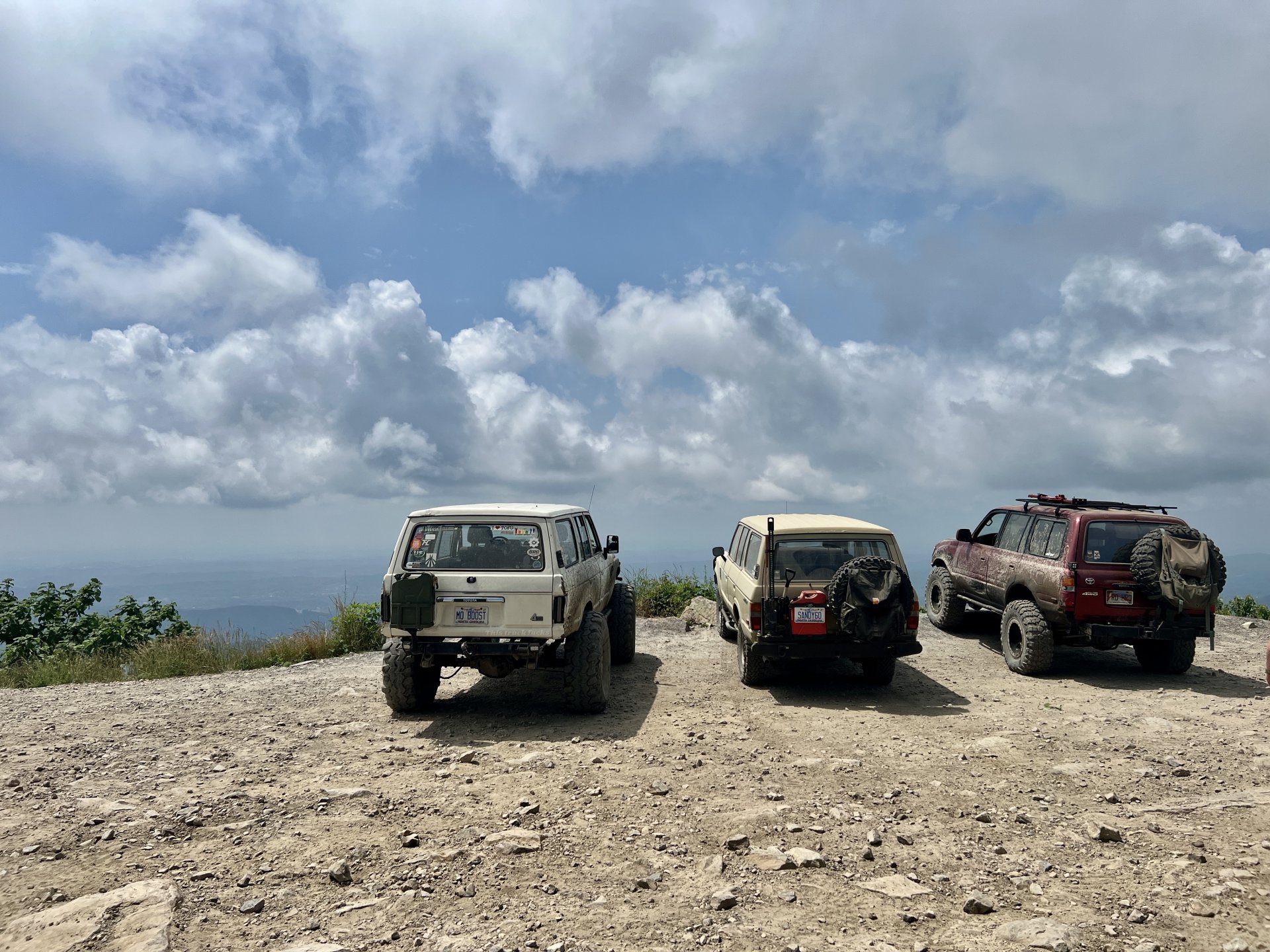 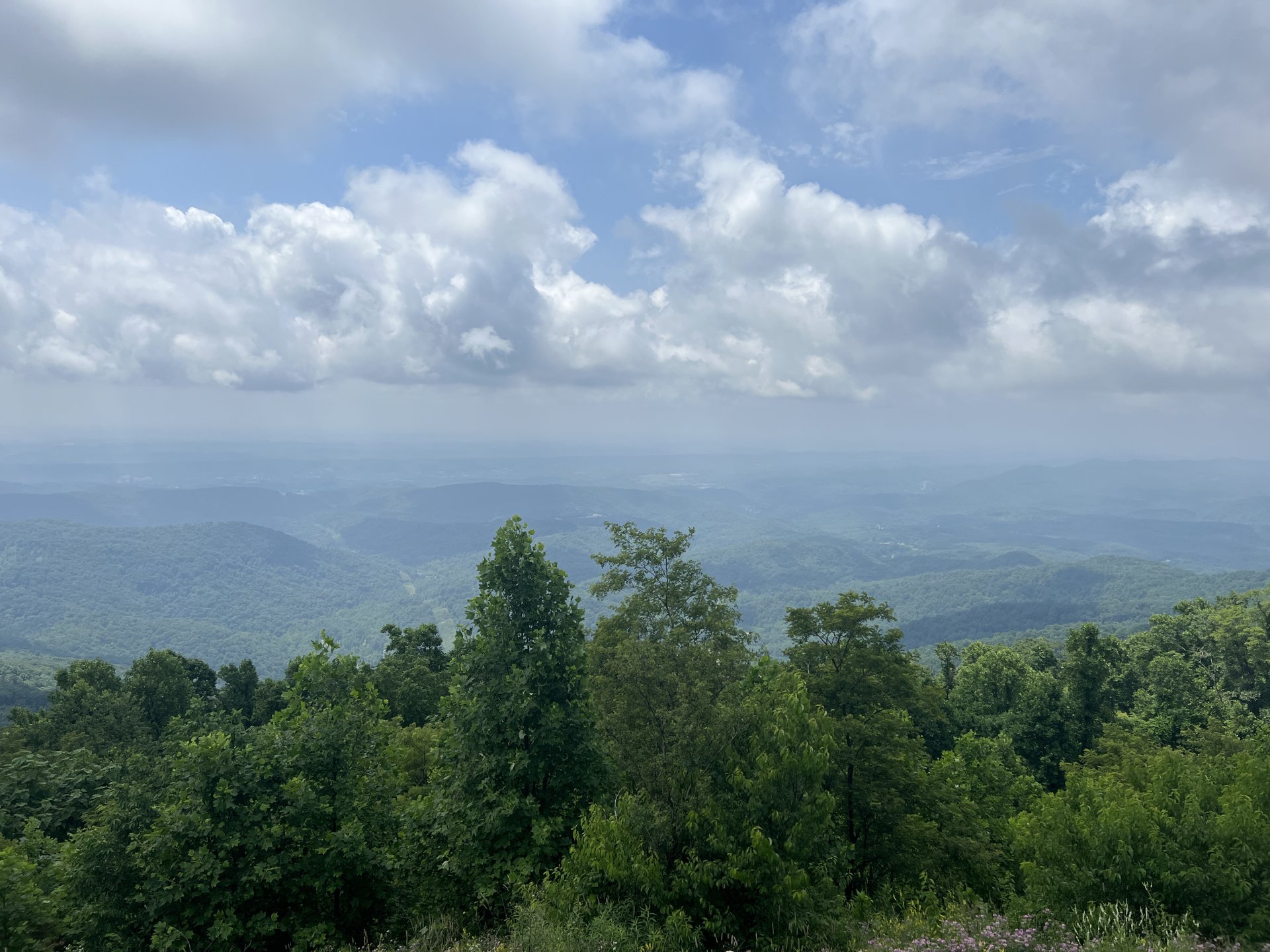 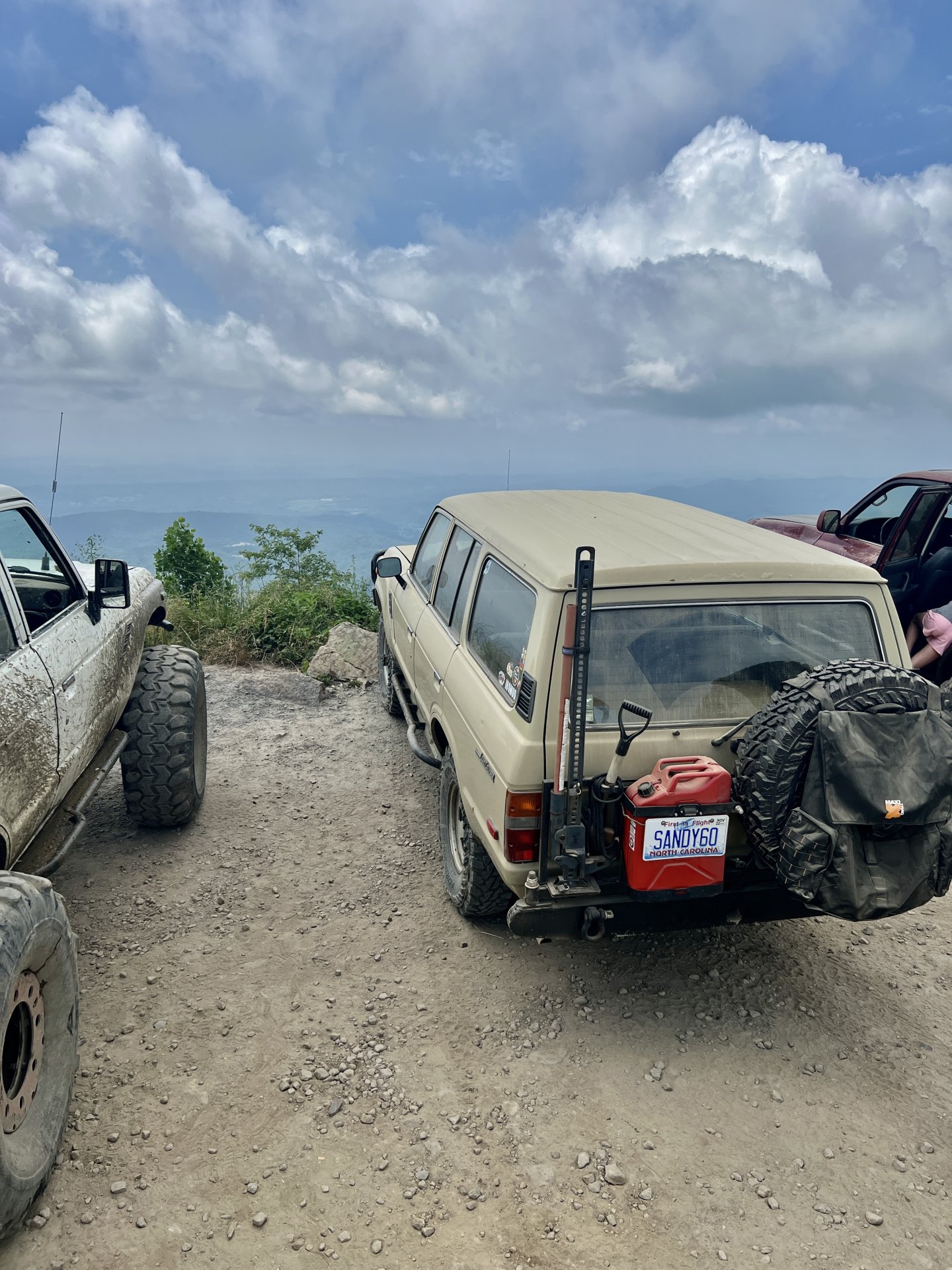 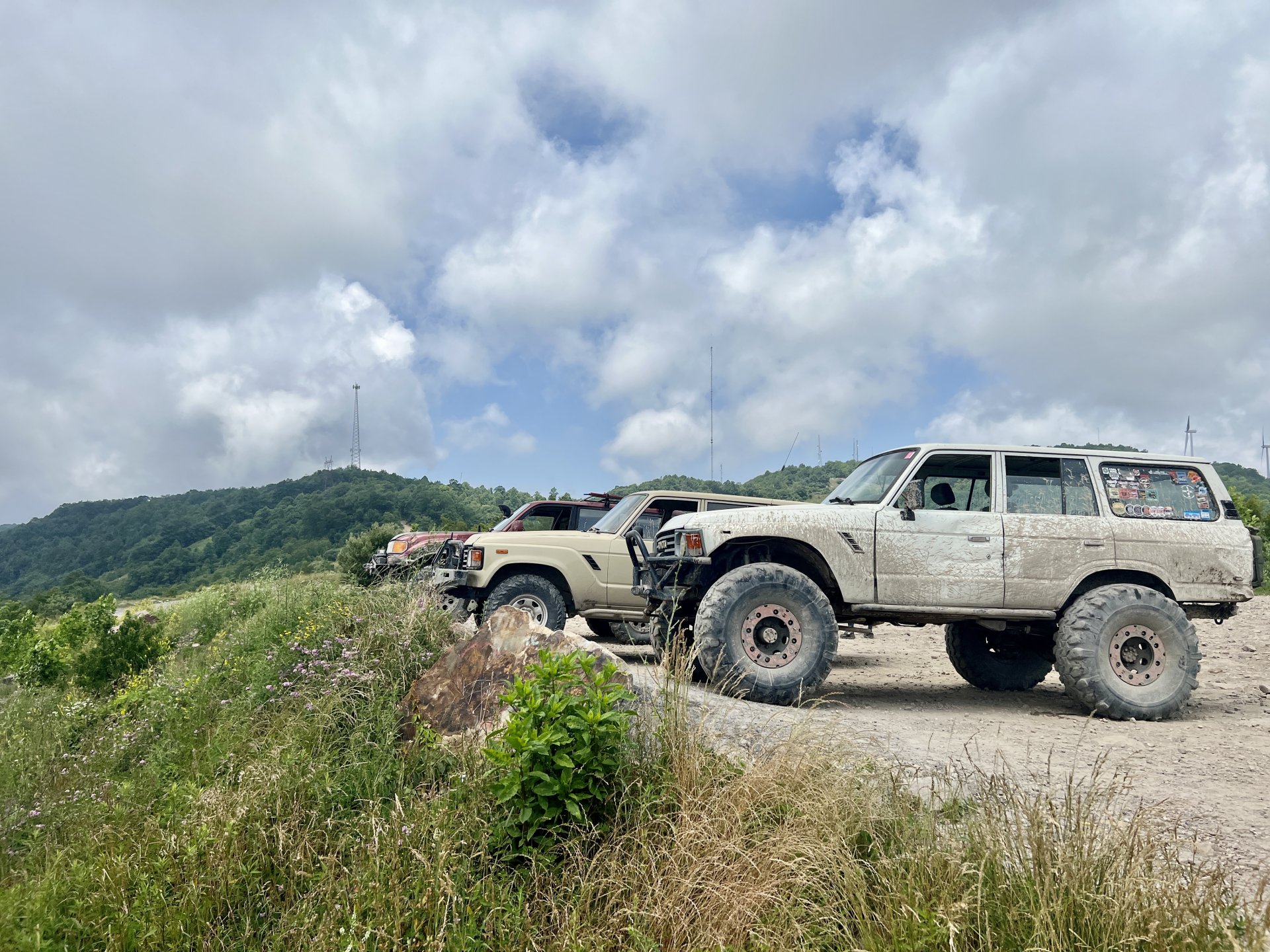 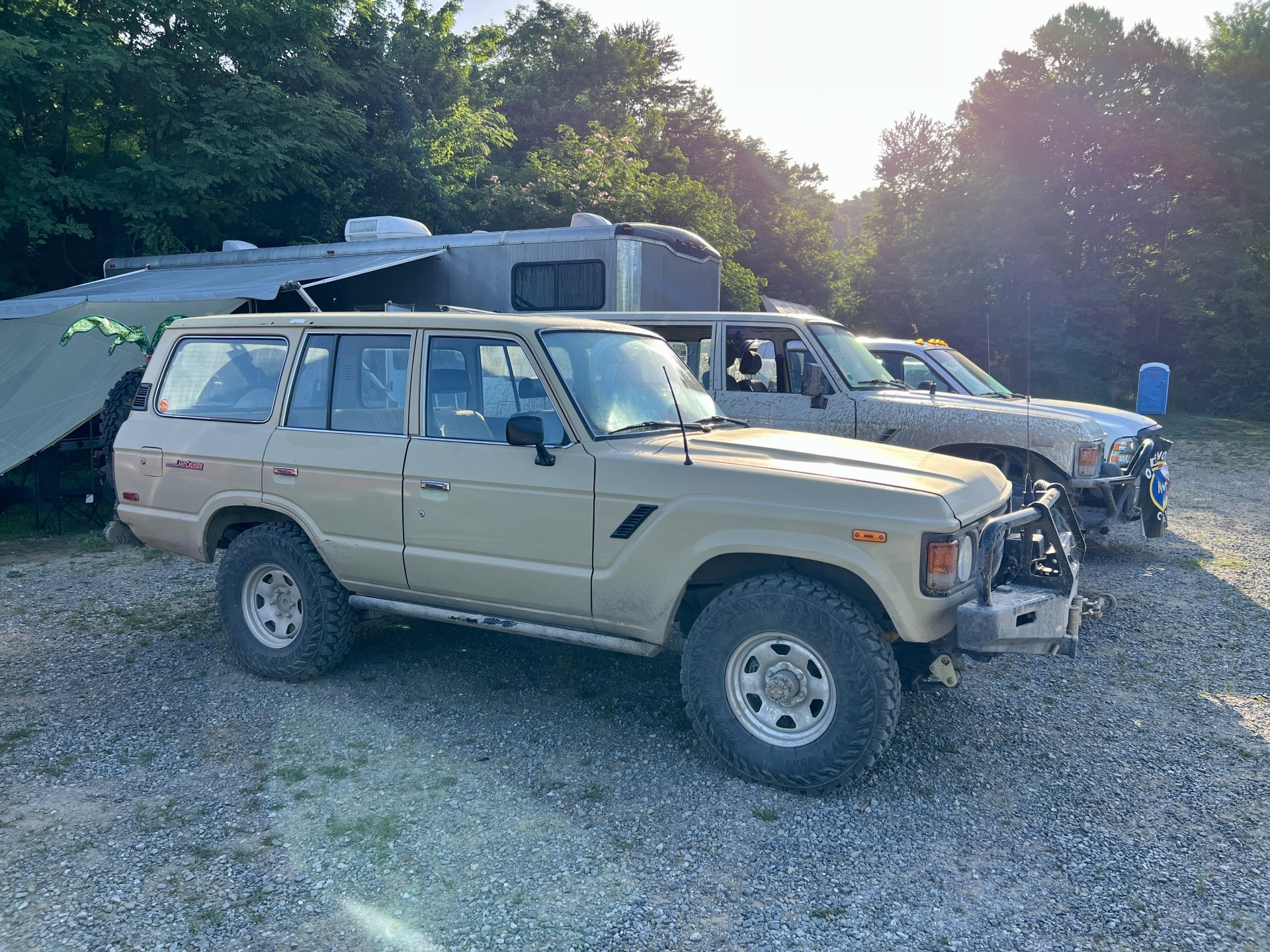 So I just read this thread front to back. I have to say I am super impressed with how much ground you have covered since getting this truck. Really nice work. Truck looks amazing and you have done a great job documenting what you did with part numbers etc. You should be really satisfied with how far this truck has come. Really enjoyed the read. Thanks.

Gretsch said:
So I just read this thread front to back. I have to say I am super impressed with how much ground you have covered since getting this truck. Really nice work. Truck looks amazing and you have done a great job documenting what you did with part numbers etc. You should be really satisfied with how far this truck has come. Really enjoyed the read. Thanks.
Click to expand...

It’s been a fun project and I’m happy with how it’s come out so far. This trip is making me like the truck even more since it’s finally going wheeling.

GSMTR was a huge success and a ton of fun. The truck drove over 800 miles at 70mph+ on the highway and did days of trail riding with no issues. I'm really happy with how the truck has come along and how it performed. Was a lot of fun to get the truck on the trail and break in the sliders.

I also got to meet some folks that I'd talked to here on mud and on instagram which was cool. Definitely looking forward to next year's event!

Also didn't hurt that I won a Rigid light bar at the raffle! 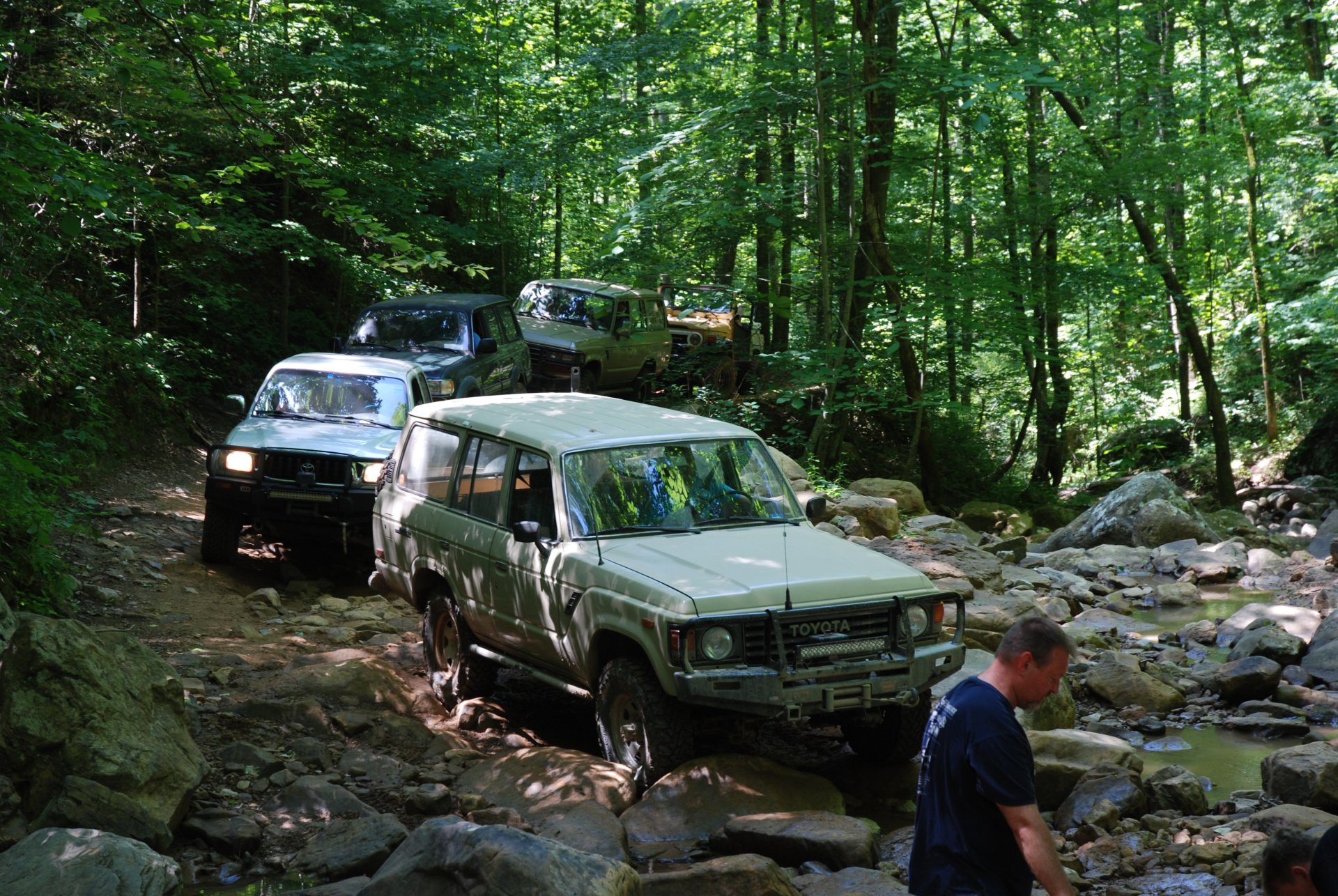 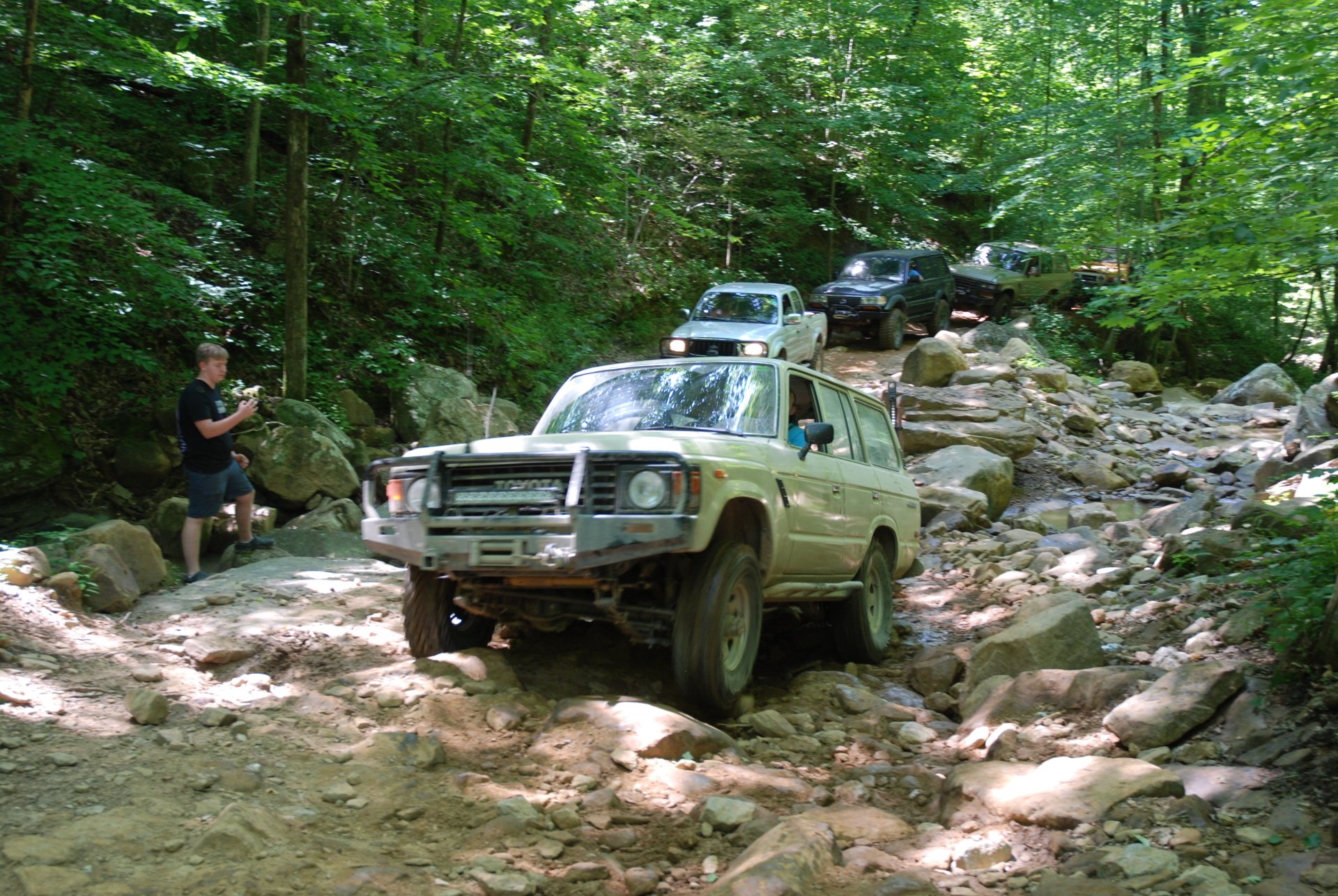 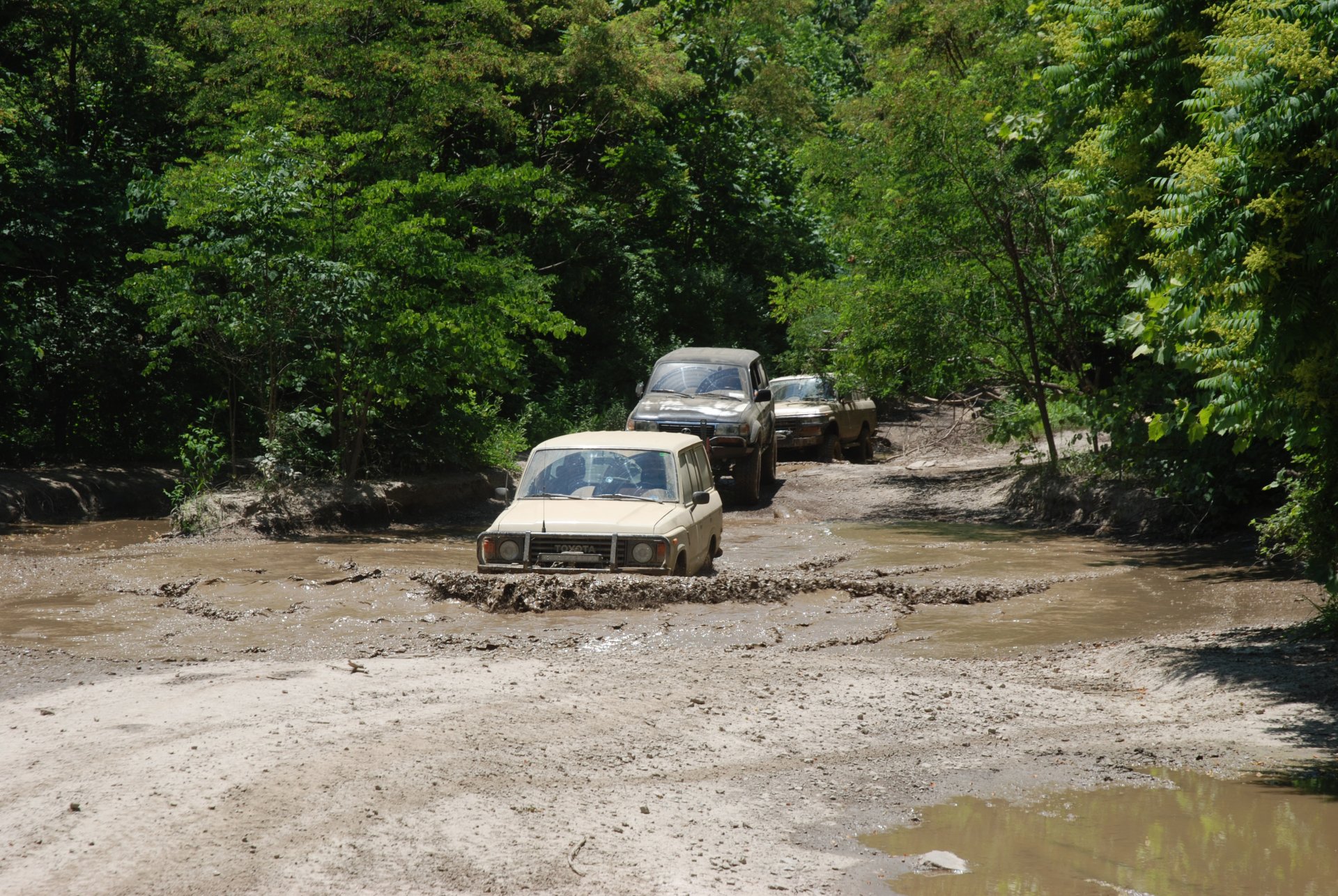 Sandy hanging out with Camo and Moonshine at camp. 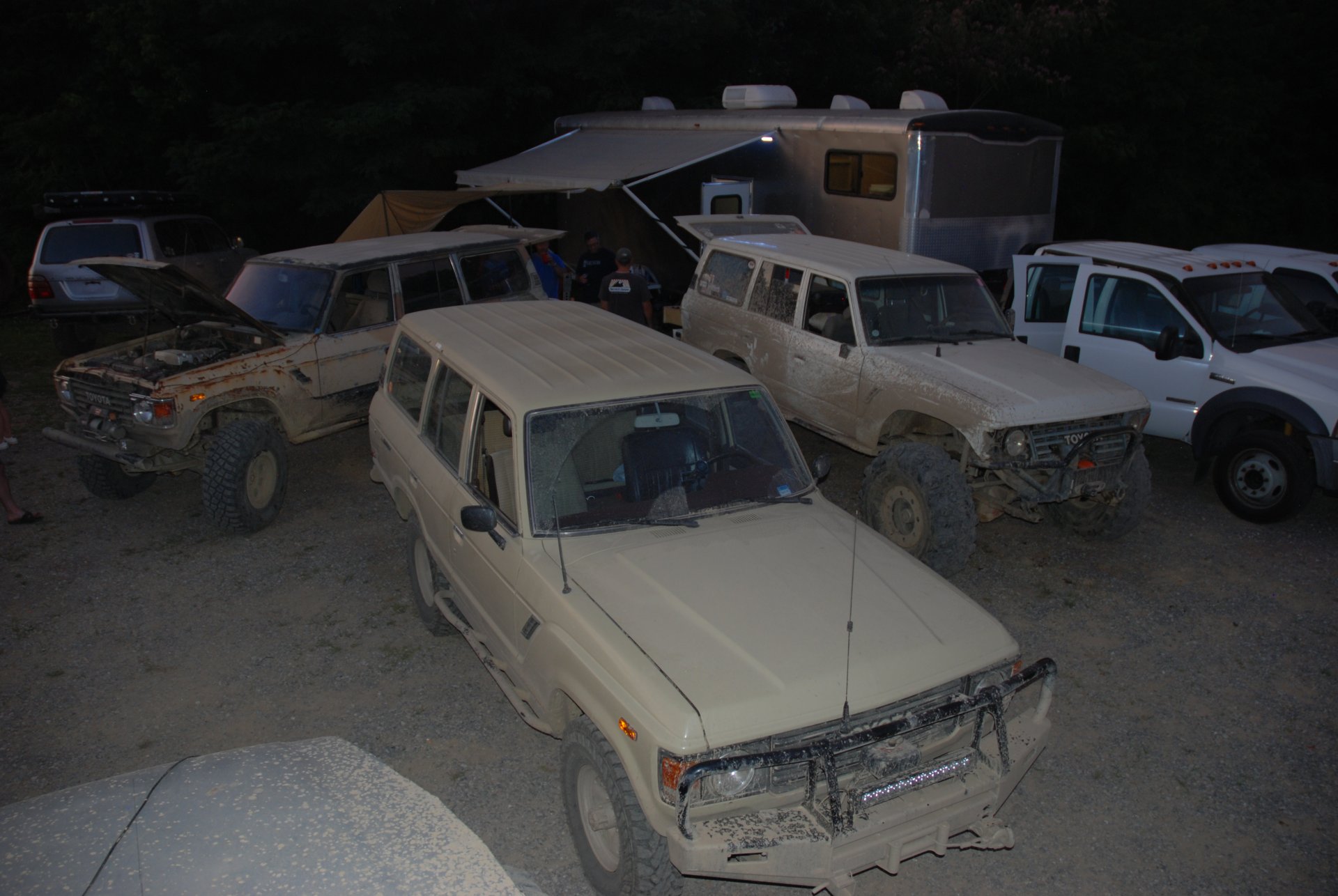 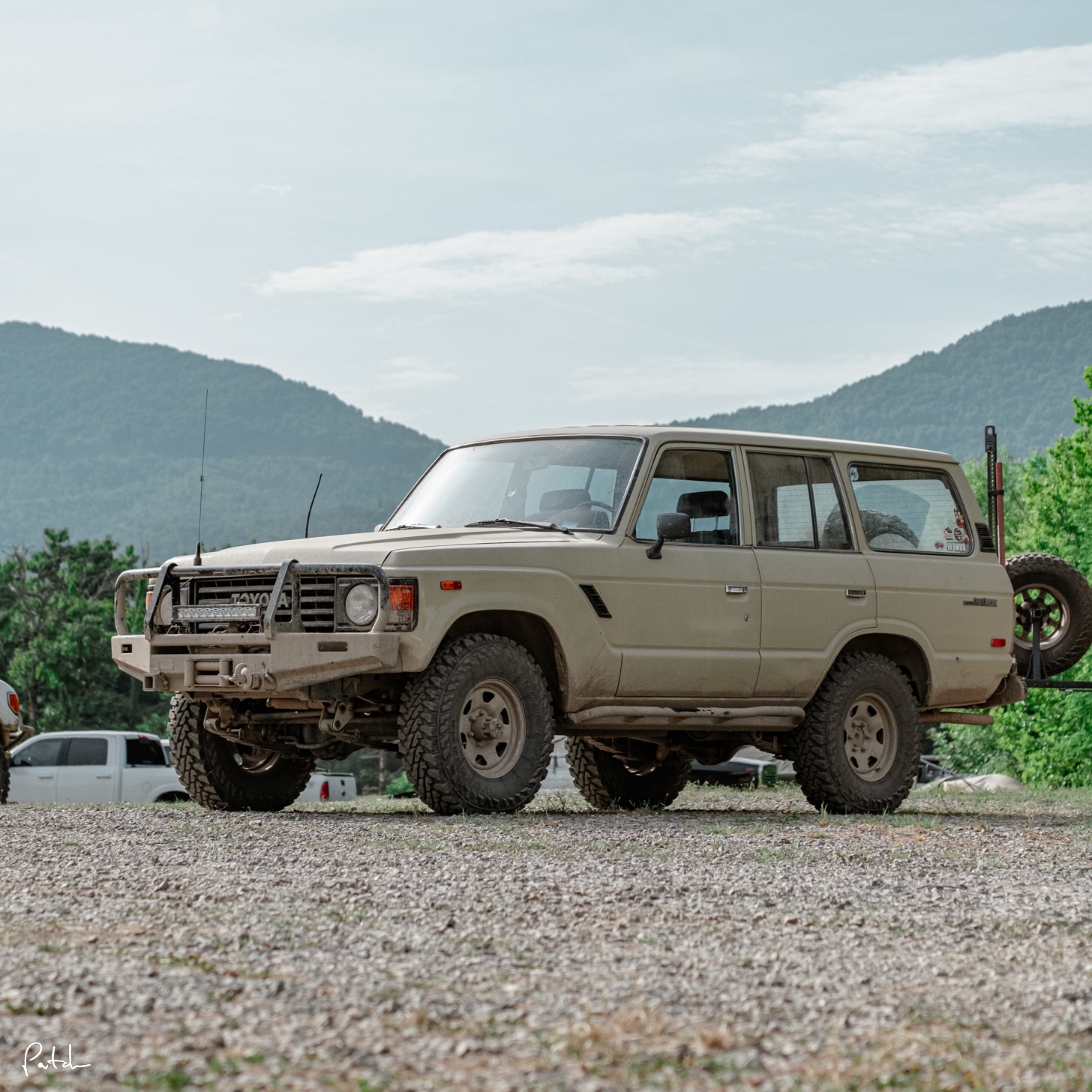 That last pic is mag worthy!

Man I've been trying to get a feature for a while 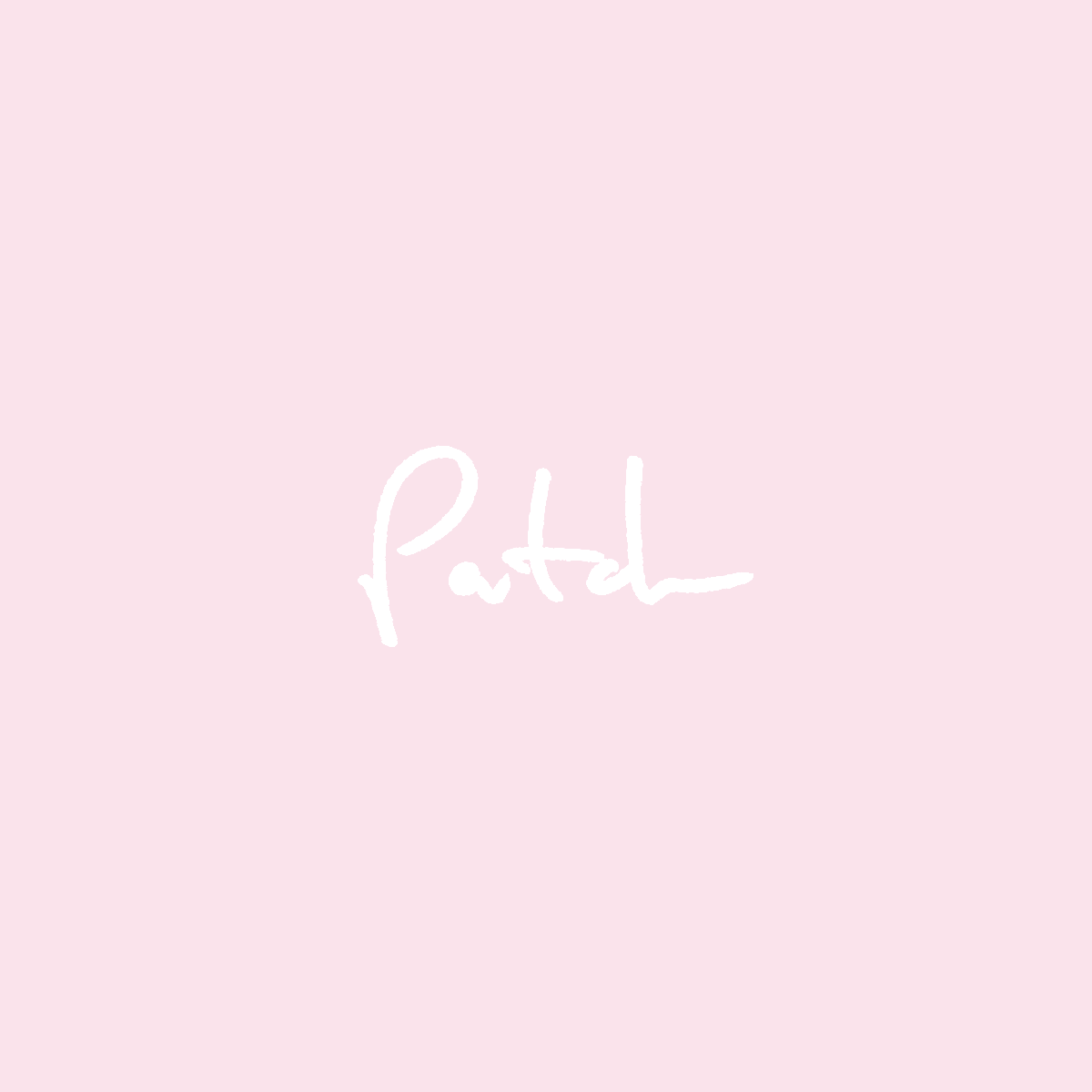 Anyone know anyone at TLCA or other orgs?
You must log in or register to reply here.