I finally got my new exhaust on yesterday. I attempted to do the job myself, but ended up taking it to an exhaust shop to be welded. I went with a Walker 18251 SoundFX muffler (21" can, 2" in/out) and a 2" direct fit walker tailpipe section. Because I already had a custom flowmaster 2 1/2" dual exhaust, the walker wasn't a direct fit, but that's not Walker's fault.

The truck is factory quiet again, and with the new Denso O2 sensor no more fuel / exhaust smell. Unfortunately being able to drive the truck uncovered a new problem. The clutch, which releases at the top of it's throw, is slipping under heavy load. I adjusted it the pedal per FSM, bled the slave cylinder and replaced the clutch master. Still slips. So today I ordered a new Aisin clutch kit and Sachs flywheel. On the plus side, my final BFG tire showed up today, so I should pics with the new tires / wheels up today. I hope.

Another positive was I sold all the components from the 90s/2000s stereo that came in the truck for $490 on eBay. Turns out the Phoenix Gold Amp is a collectors item now, same for the Eclipse EQ. 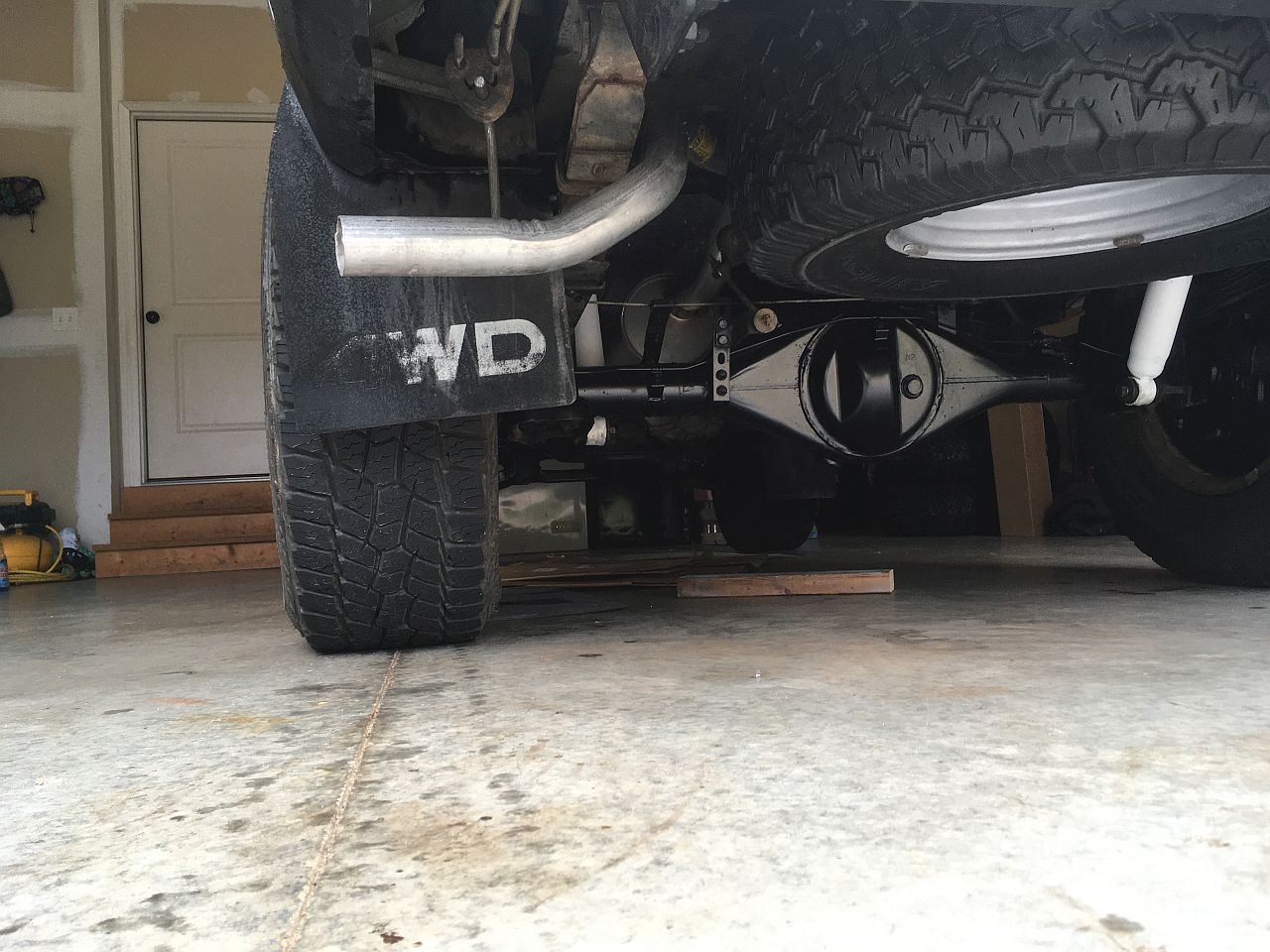 Finally got the new BFGs mounted on the SR5 wheels. This is easily the single best appearance mod and really improved the look of the truck to what I now consider, pretty sweet. 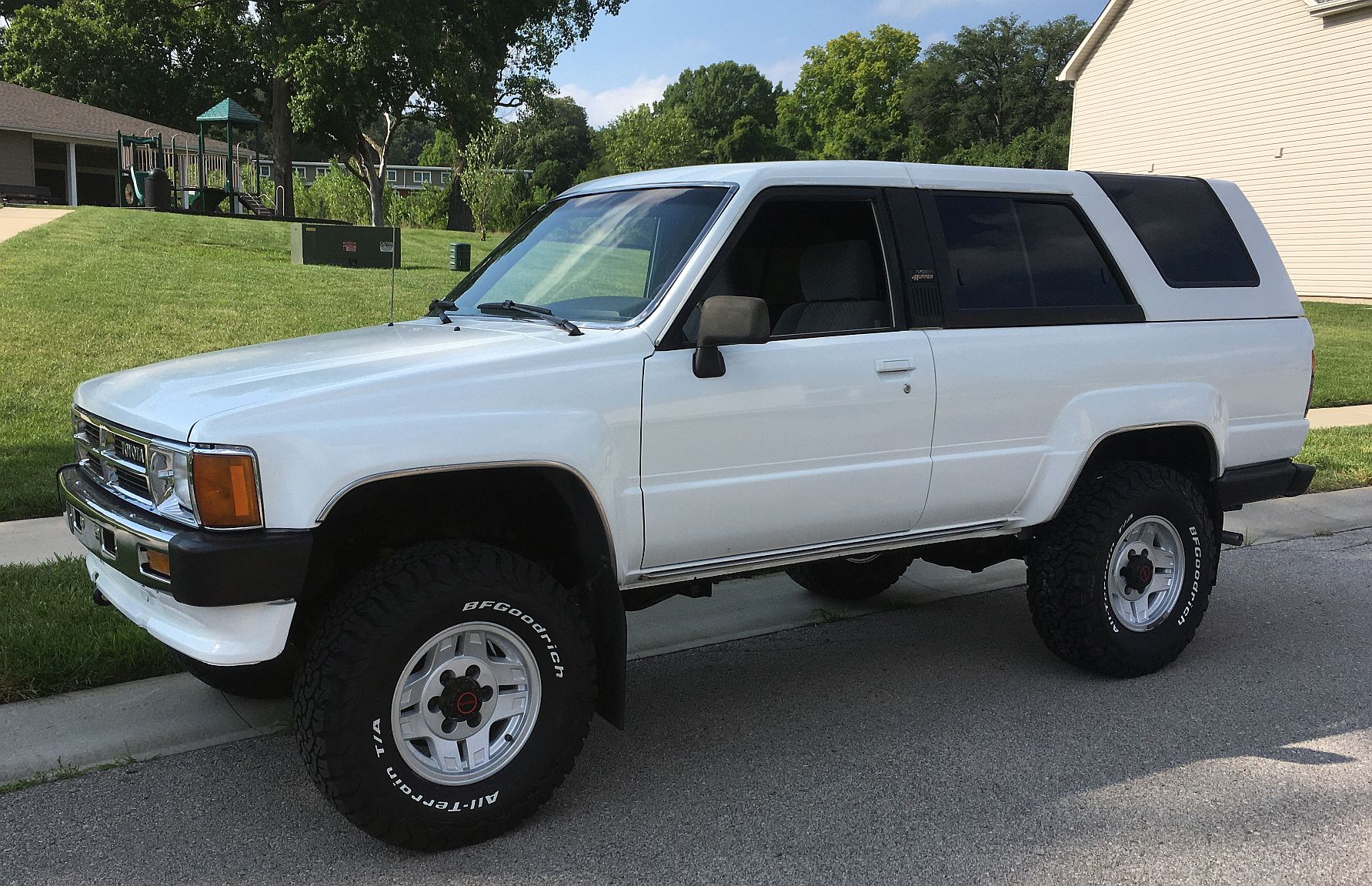 That is beautiful! Perfect!

Put in some quality time under the truck on Saturday and Sunday. New Aisin clutch and Sachs flywheel. Whoever can do this job in 6 hours is a beast. It took me at least twice that long working solo. Of course I took my time cleaning things and painting things that needed to be touched up. I also lucked out and borrowed a transmission jack from a neighbor. I don't think I could have done the job solo with just a floor jack. Pressure plate and flywheel were heat scored and in pretty bad shape. Friction disk was to the rivets in places. 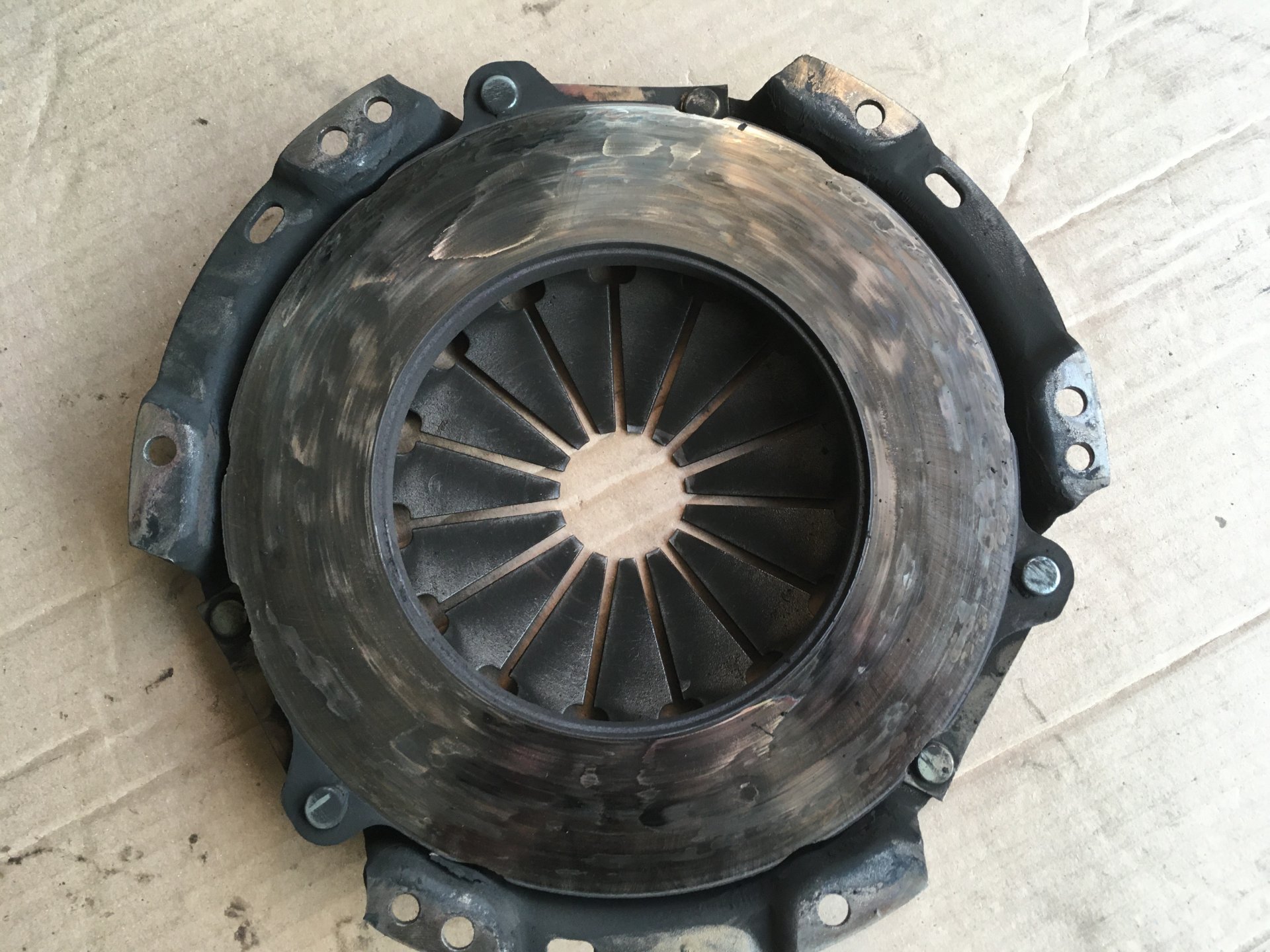 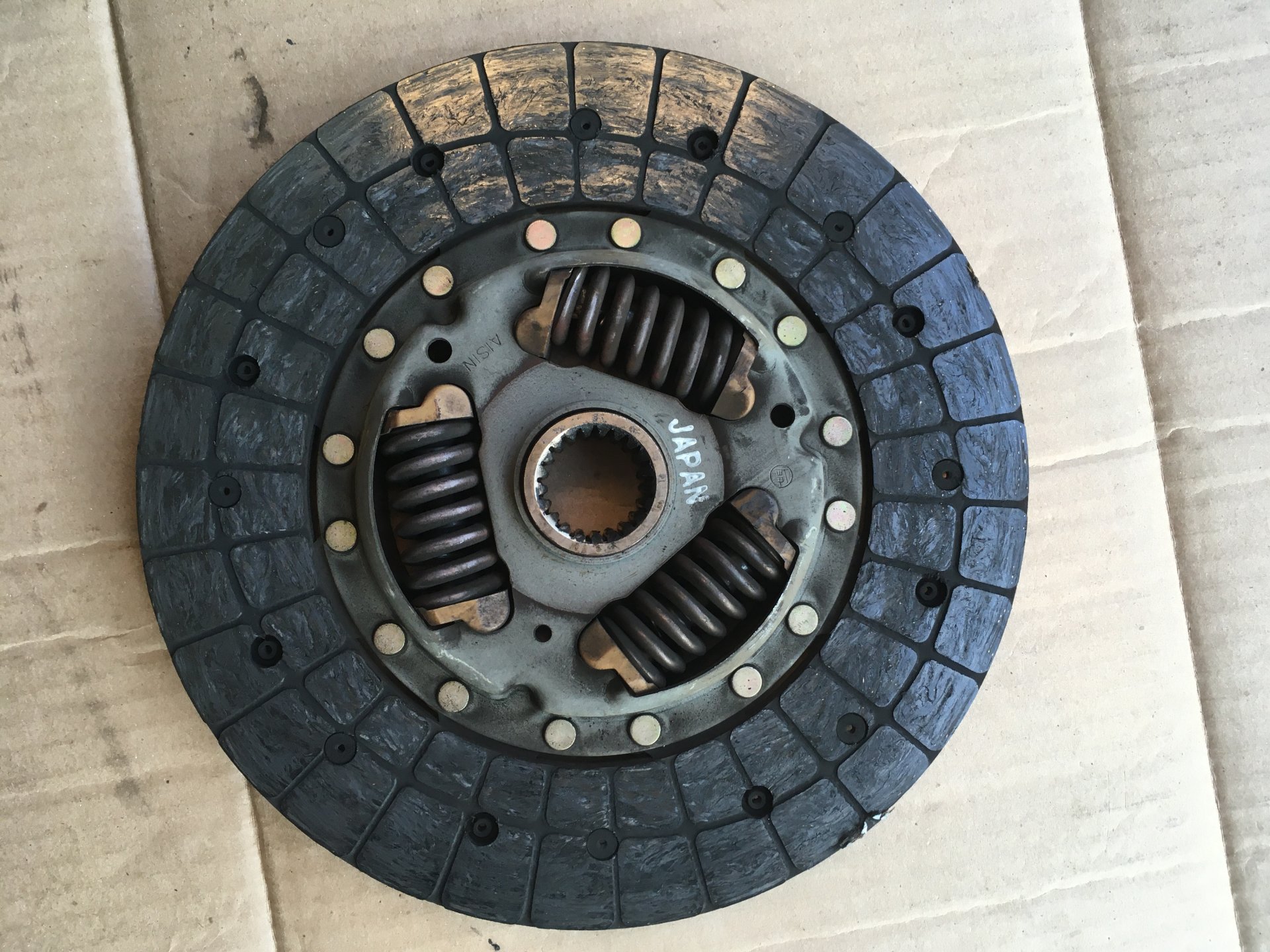 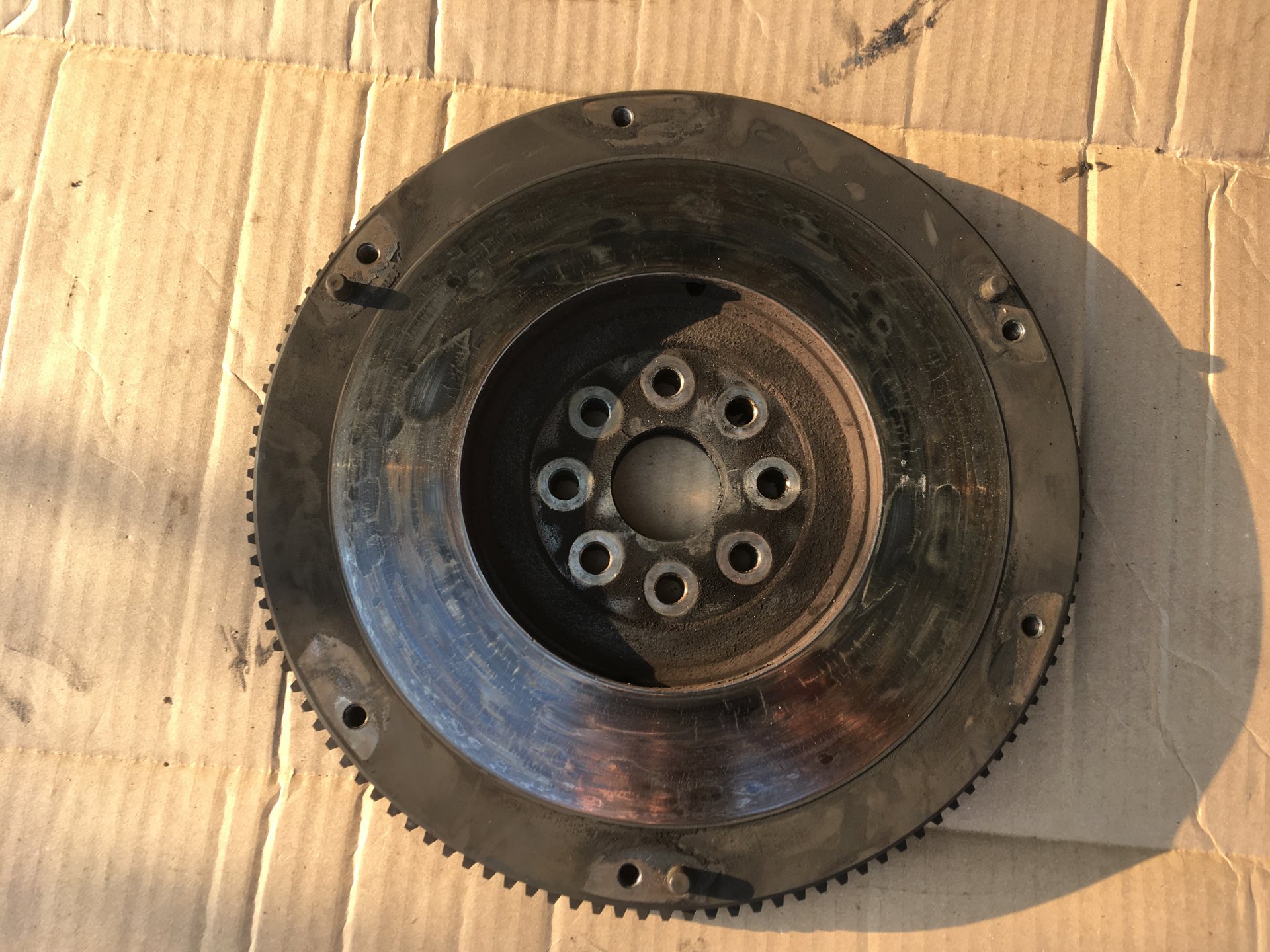 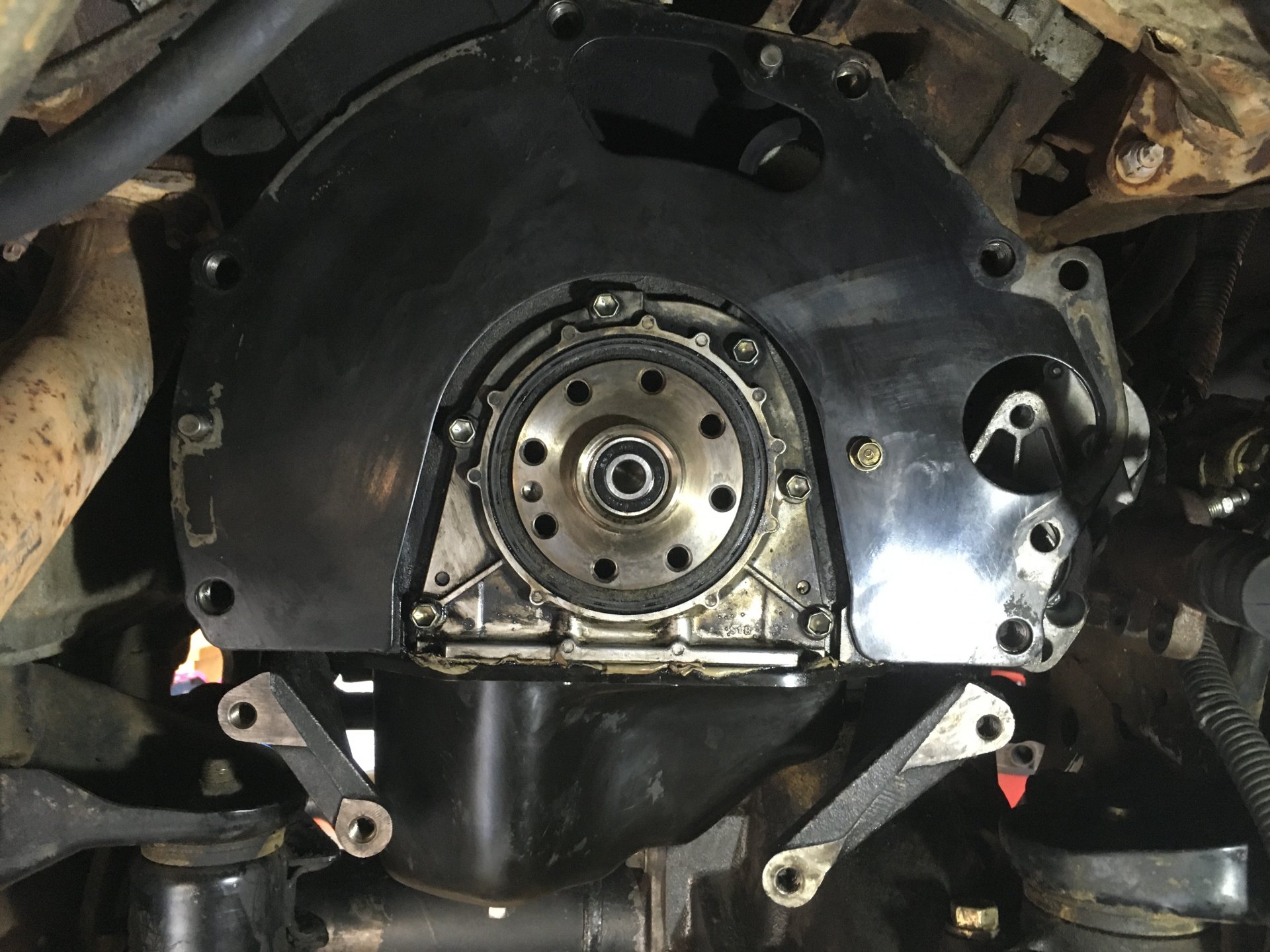 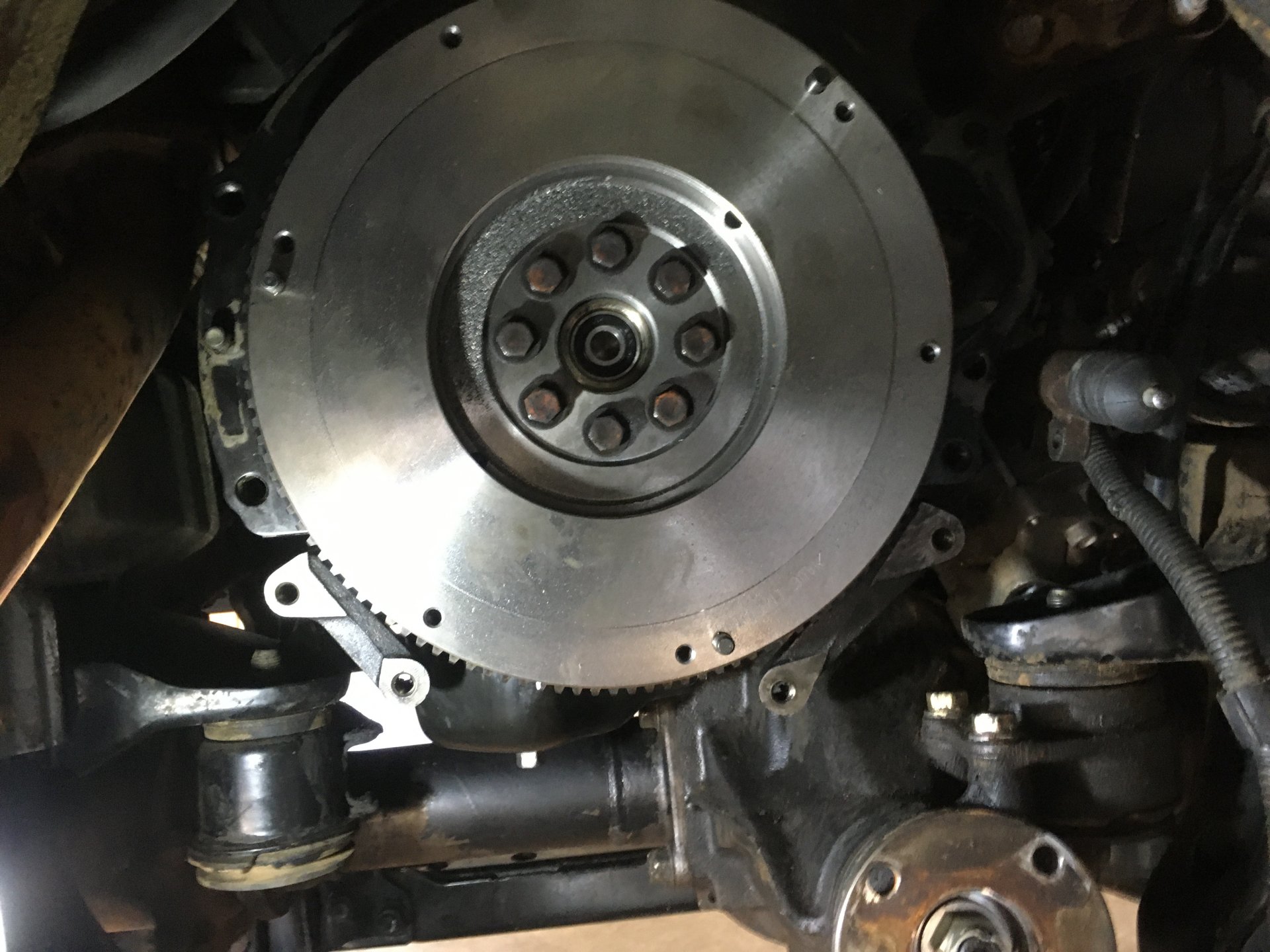 Clutch installed. Transmission getting cleaned (that was at least two hours). Still need to replace the rear pinion seal and add oil to the front and rear diffs and transfer case / transmission. While I was at it I replace the passenger side CV axle (outer boot was ripped). 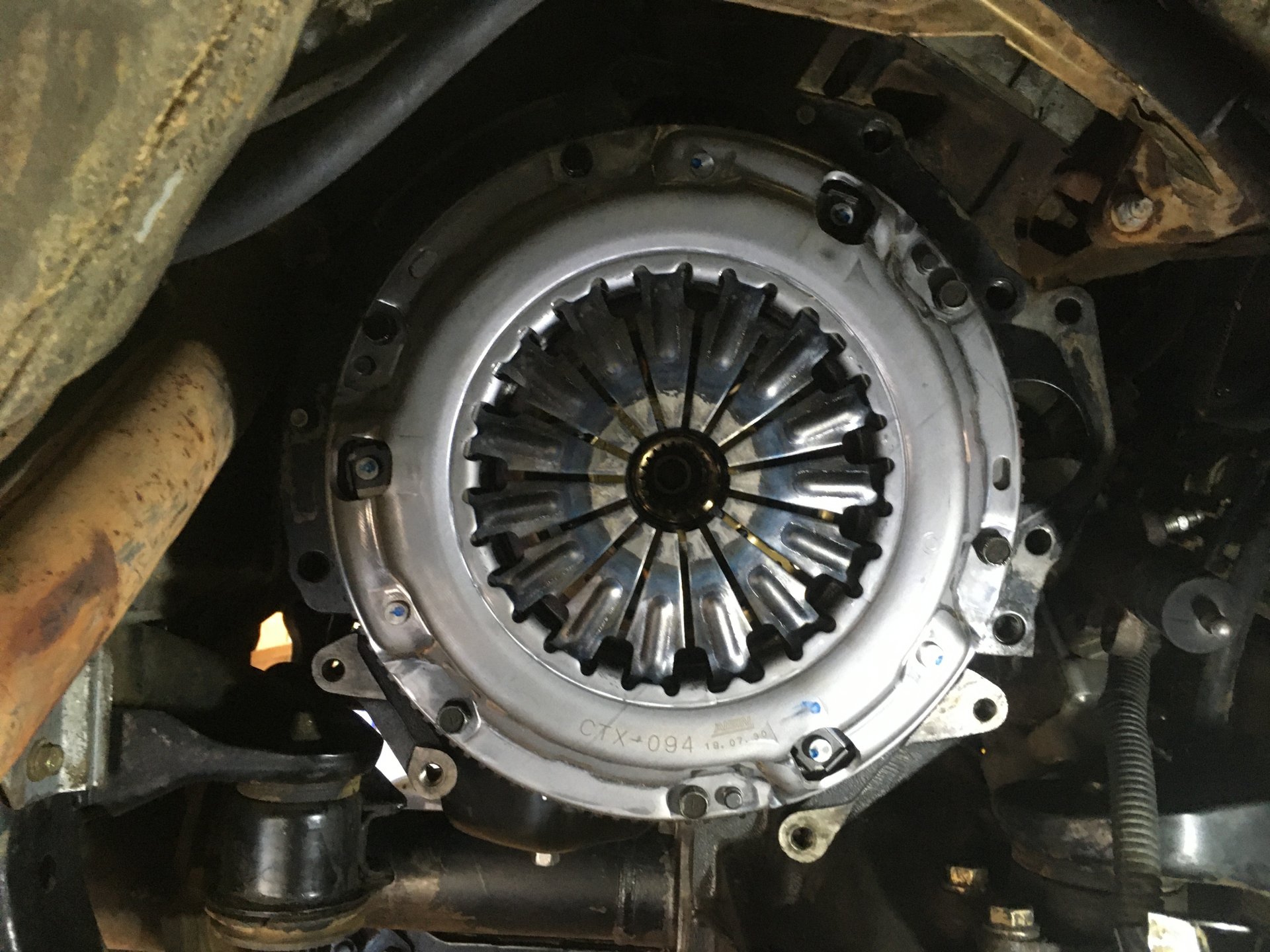 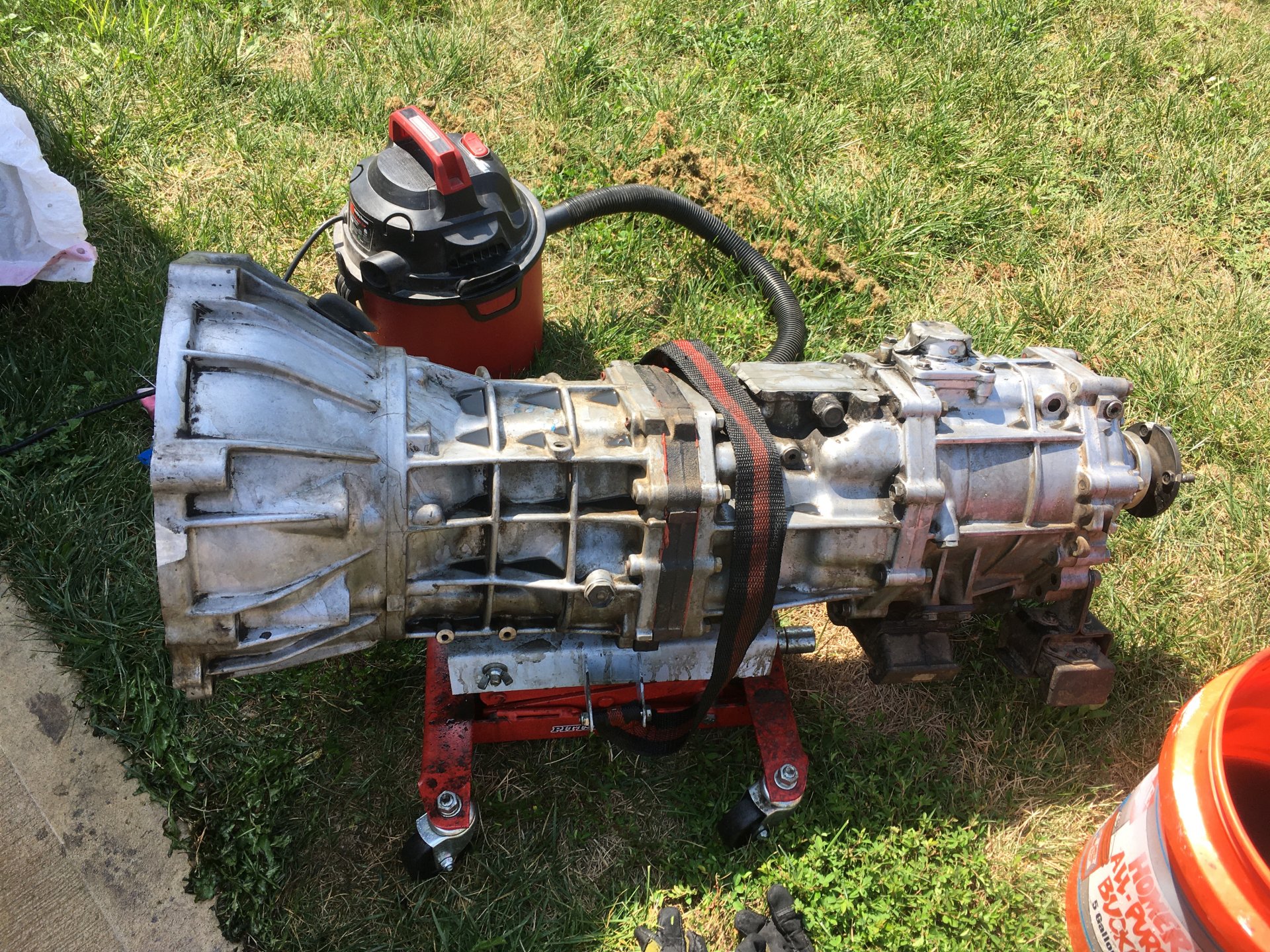 Finished up the rear pinion seal today and topped everything off with oil. Maiden voyage complete. Clutch and shifting feel great; used redline MT90 in the trans / transfer. Clutch releases about mid-way up the pedal now. Everything seems normal. Checked for leaks after a 15 min drive and didn't find any. I finally tested 4WD Hi / Lo. Low range works, but I was surprised that no 4WD indicator came on. Not sure if it has one or not.

4WD sender is on the side of the transfer case. Make sure it's plugged in.

pappy said:
4WD sender is on the side of the transfer case. Make sure it's plugged in.
Click to expand...

I double checked. Wiring is connected. Reseated connector and no change. I suspect the bulb in the cluster is burnt out. I should probably check the sender to make sure it's working before I pull the gauge assembly.

jsabowabo said:
I double checked. Wiring is connected. Reseated connector and no change. I suspect the bulb in the cluster is burnt out. I should probably check the sender to make sure it's working before I pull the gauge assembly.
Click to expand...

As I recall, without crawling under the truck, it's a one wire sender. It simply grounds the circuit. Put the tc in 4WD and check for continuity between the connector and the case.

pappy said:
As I recall, without crawling under the truck, it's a one wire sender. It simply grounds the circuit. Put the tc in 4WD and check for continuity between the connector and the case.
Click to expand...

Thanks for the suggestion. Turns out it's two wires from the TC into a two pin connector. One of the wires had pulled back in the TC side of the connector by 1/2". I seated that wire in the connector and everything is now working. Really appreciate the help pappy.

jsabowabo said:
Thanks for the suggestion. Turns out it's two wires from the TC into a two pin connector. One of the wires had pulled back in the TC side of the connector by 1/2". I seated that wire in the connector and everything is now working. Really appreciate the help pappy.
Click to expand...

It's the simple stuff that gives us the most aggravation.

Such a nice transformation yanking off all the boy-racer mods. Nice work.

The overnight test didn't end well. Puddle of oil under the rear diff and oil leaking from the pinion seal. I must not have gotten the seal on correctly. Ordering two seals this time.

Still waiting on the rear pinion seals, but I did get my new bikini top on from Killer Toy Tops. I got their newer model in black Sunbrella fabric. The top works great and provides shade for the kids in the bench seat. Tested it out up to 60 today and got no flapping. Very satisfied. The kids are wanting to ride in the 4Runner instead of the Sienna. 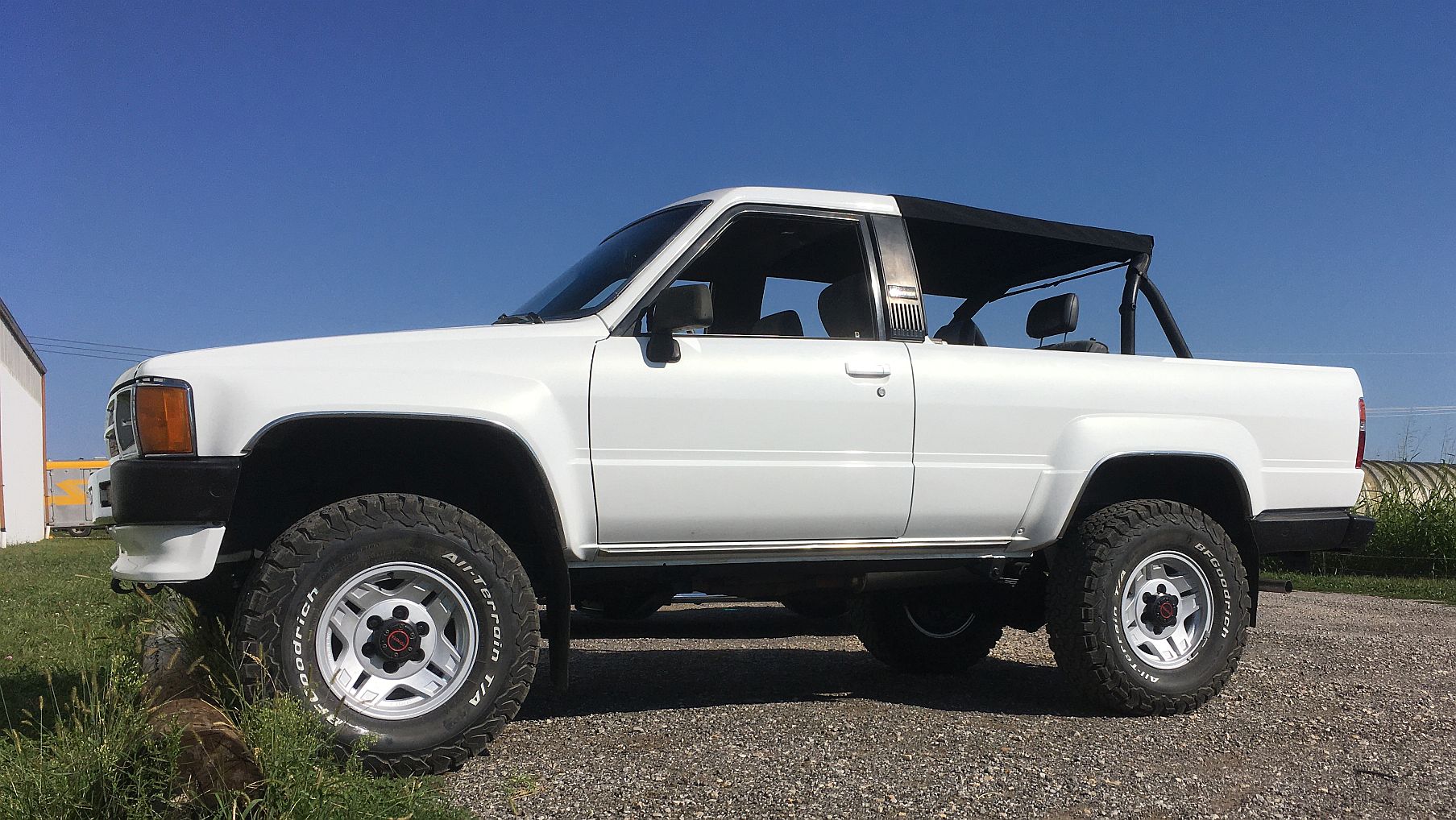 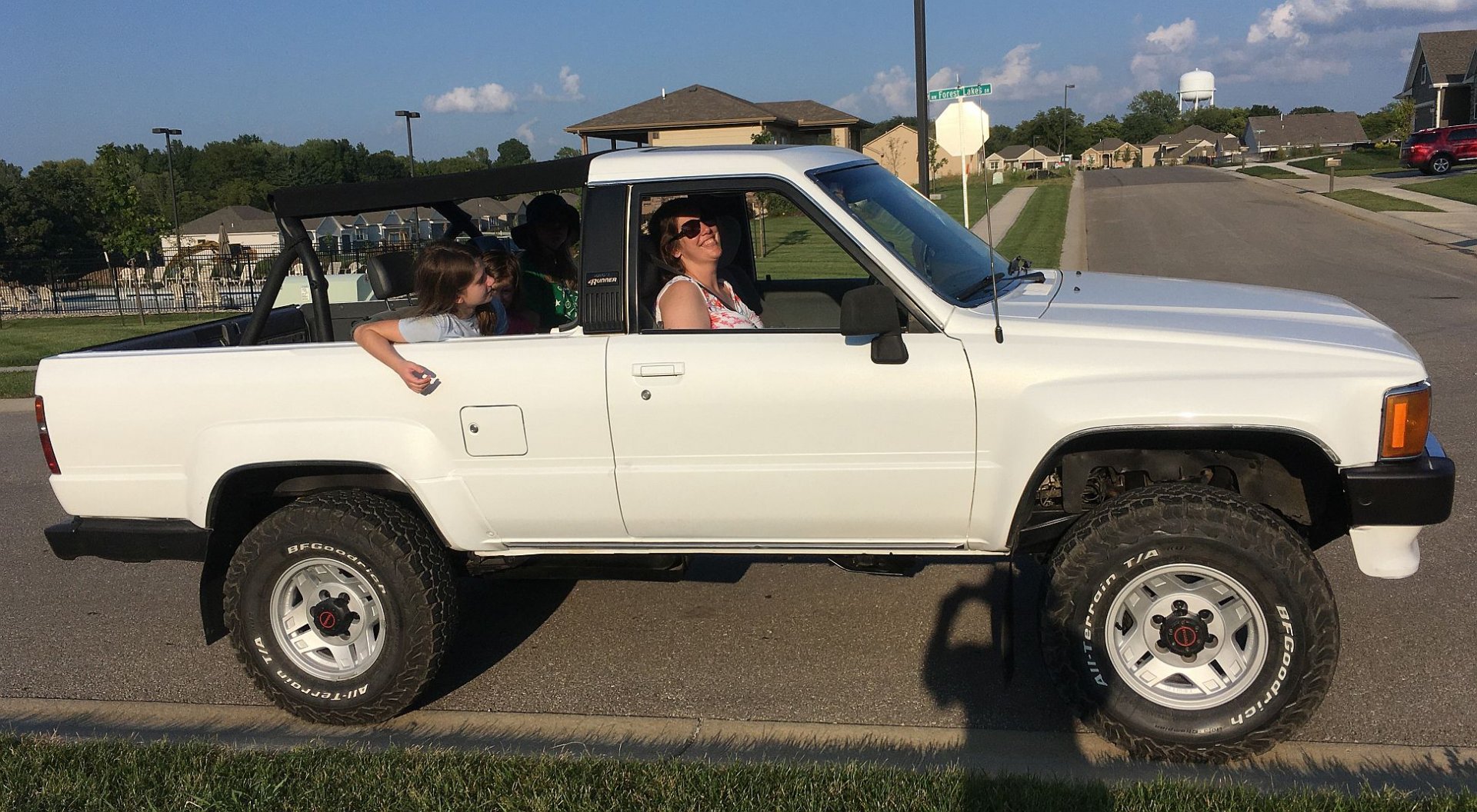 Did a bit more work. First the good news. I broke out my 110 welder and fabbed up a new exhaust exit. The walker 2" the exhaust shop did just wasn't to my liking. Sits a lot closer to the chassis than before. 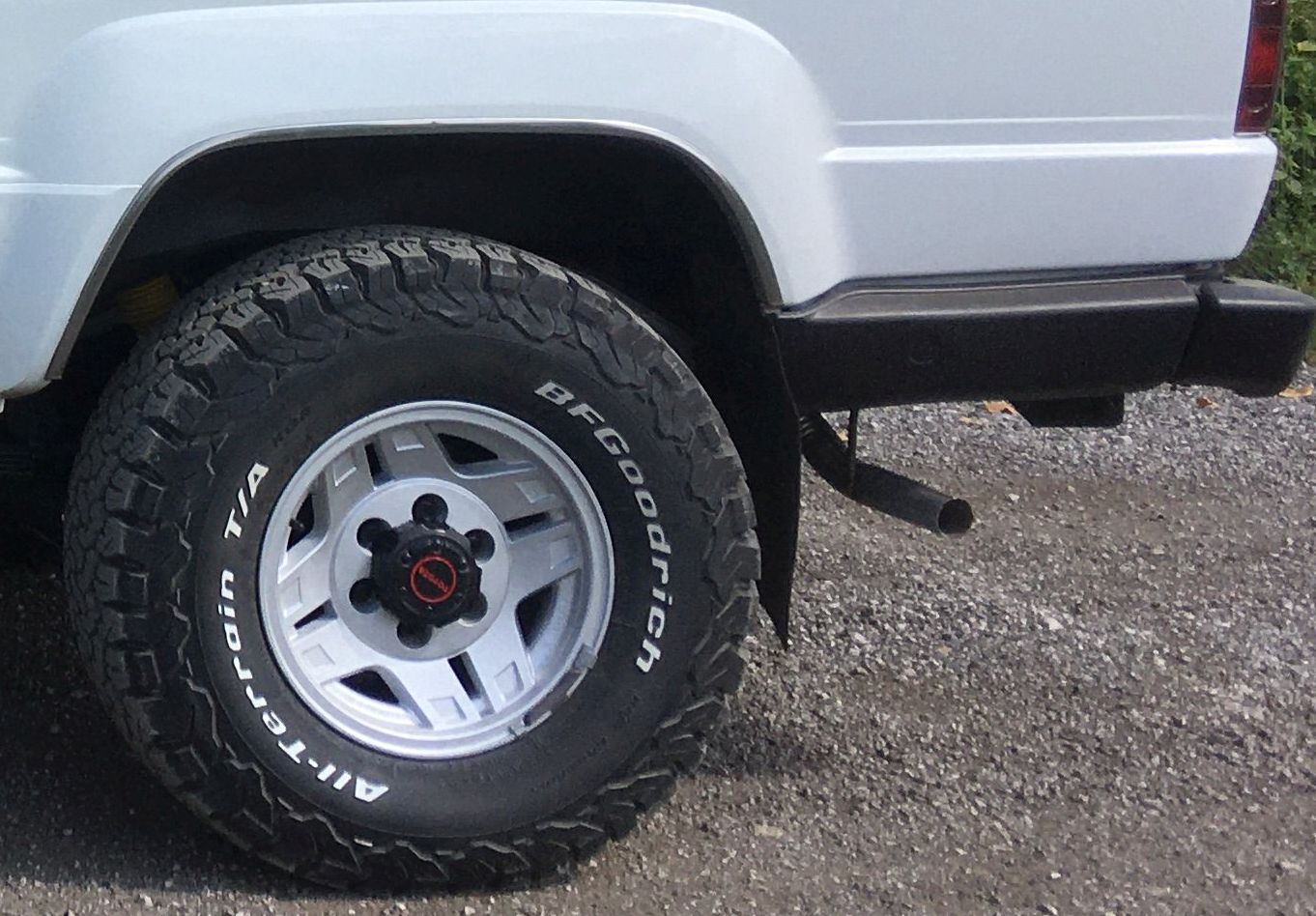 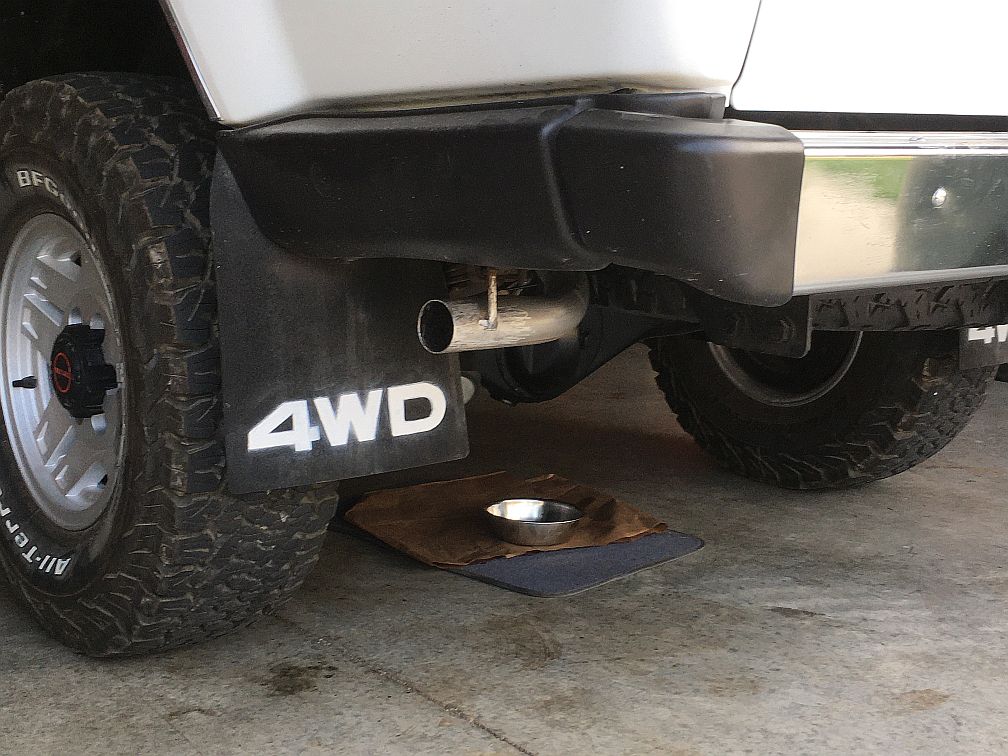 I also got the new pinion seal in and thankfully got it installed correctly. No leaks after a week.

Now for the bad news. Found a puddle of coolant under the truck on Friday. Looks like a leak from the thermostat housing. Pulled that and ordered a new thermostat, gasket, upper and lower radiator hoses and new belts. I didn't see any evidence of leaking from the water pump housing overflow.

I also pulled the throttle body as I've been trying to chase down an intermittent code 71 (EGR), which will occasionally pop on with certain low speed driving, then quickly go away Found the intake manifold caked in carbon. Deposits are pretty thick around the EGR tube. Ran out of carb cleaner so that will have to wait until tomorrow. 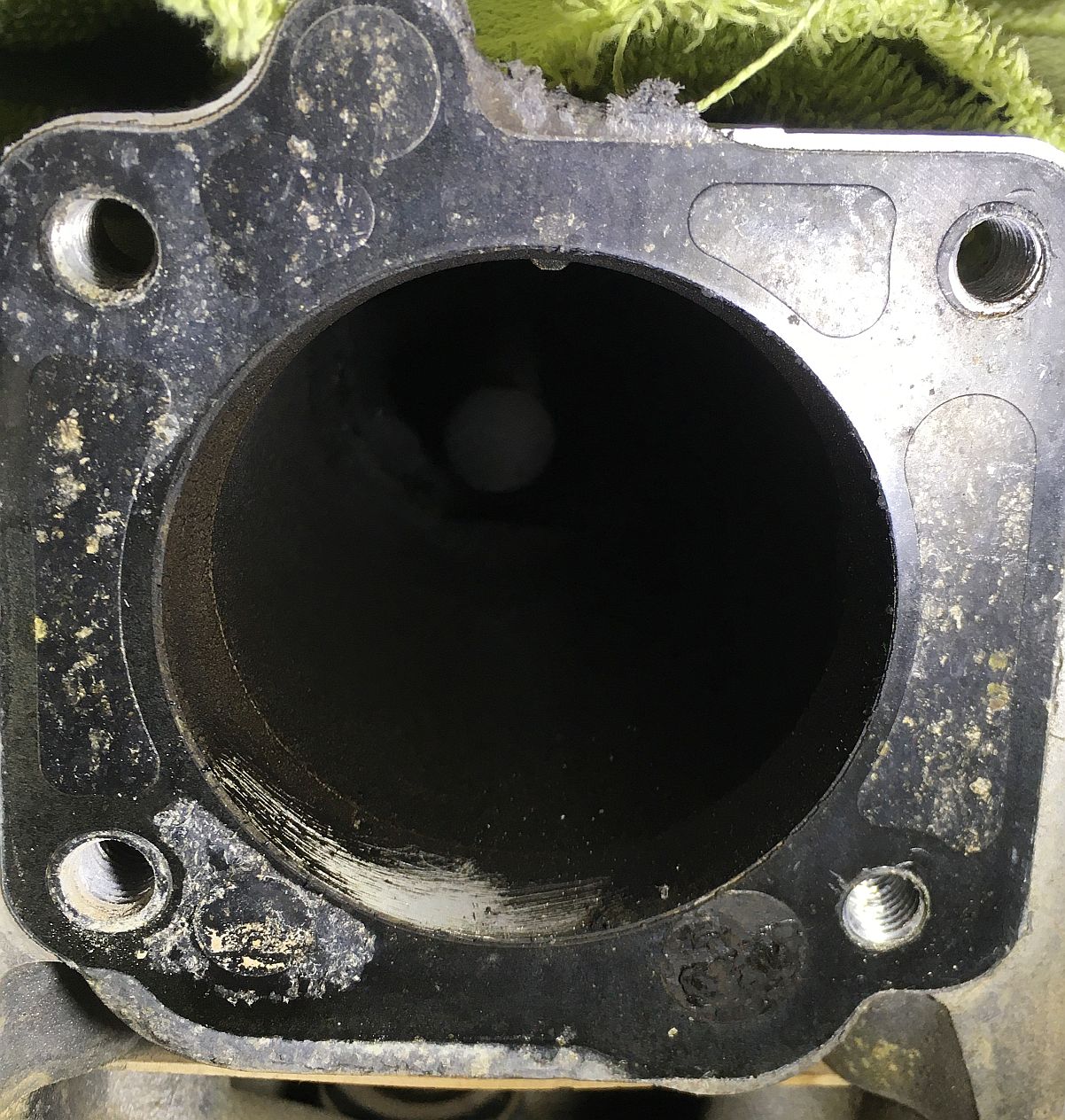 Finally, I'm still trying to figure out what lift I have on the truck. Seller claimed OME, which is not true. 4Runner has Rancho shocks (5143 rear, no markings on the front). With the truck sitting on its suspension, the shocks measure 20" center to center rear, and 13.5" in the front. So I'm thinking it's either a 2" or 4" lift.

Here's the rear springs. Anyone know what these are? 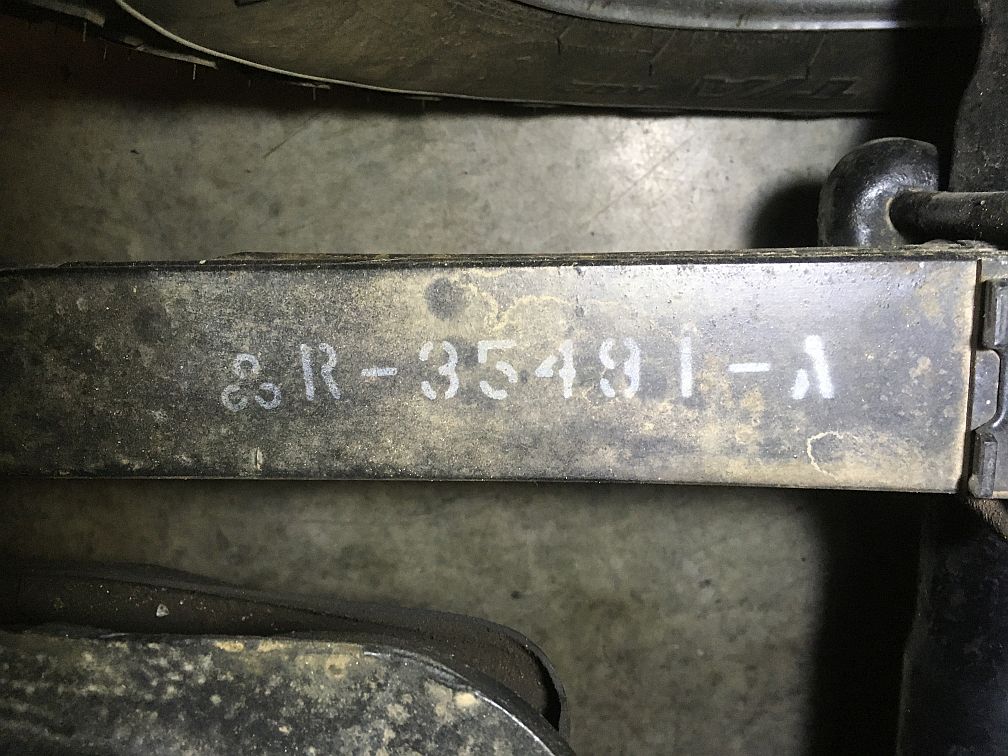 So the 3.4 Swap is underway. I sold my trusty 3VZE over the weekend. I've also purchased a 1996 4Runner, 3.4, 5MT, 4WD donor vehicle. I've got the 3.4 out doing the timing belt and seals while I wait for my exhaust crossover to be finished by Toy Only Swaps and my wiring harness to be done by Payne Olson. A few pics. Everything is taking longer than I expected as I'm picky about cleanliness.

I did check compression before I pulled the engine and it was 210-215 across all cylinders. Ran strong. I was able to strip everything I needed off the donor, which saved me a bunch of money vs buying from a junk yard, plus I got to hear the engine run and know everything came from the same vehicle.

I was really excited to be able to find an 3.4 Manual 4Runner as they are extremely rare. Plus I was only willing to pay $1500 or so for the donor. 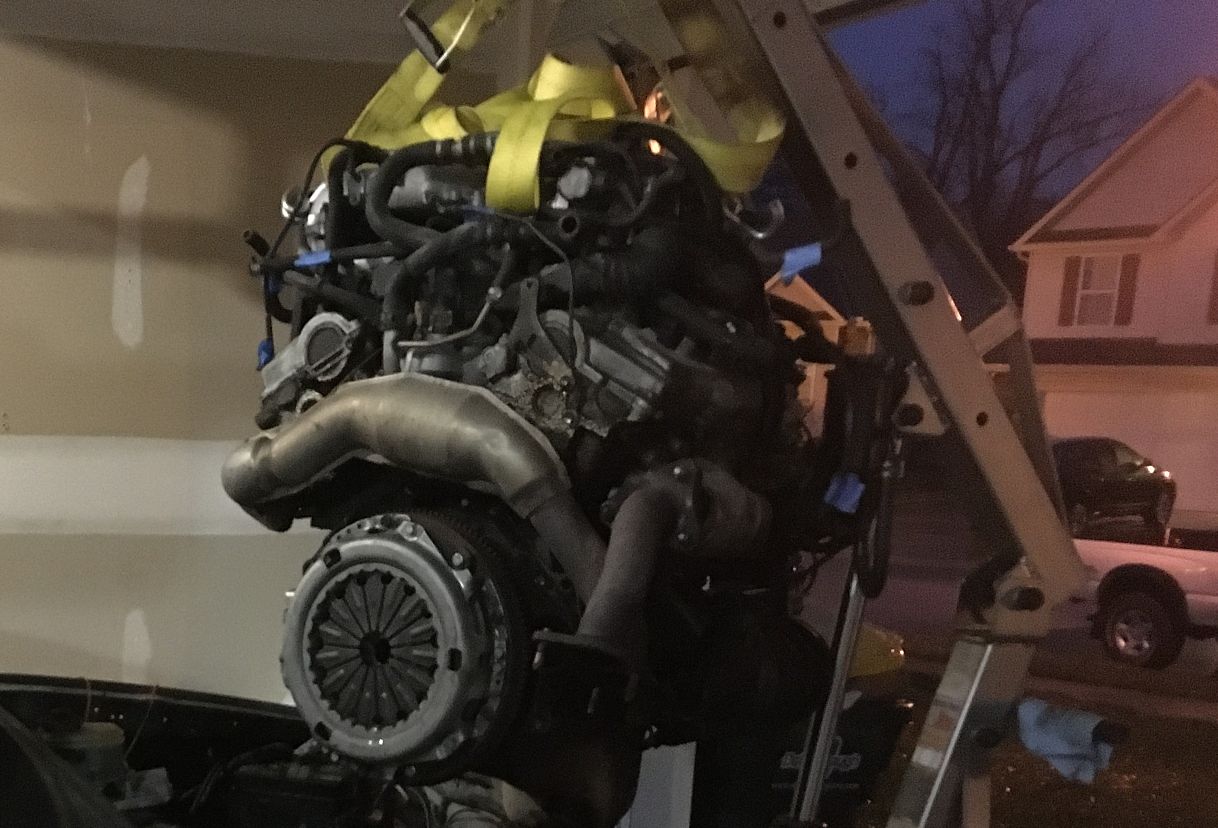 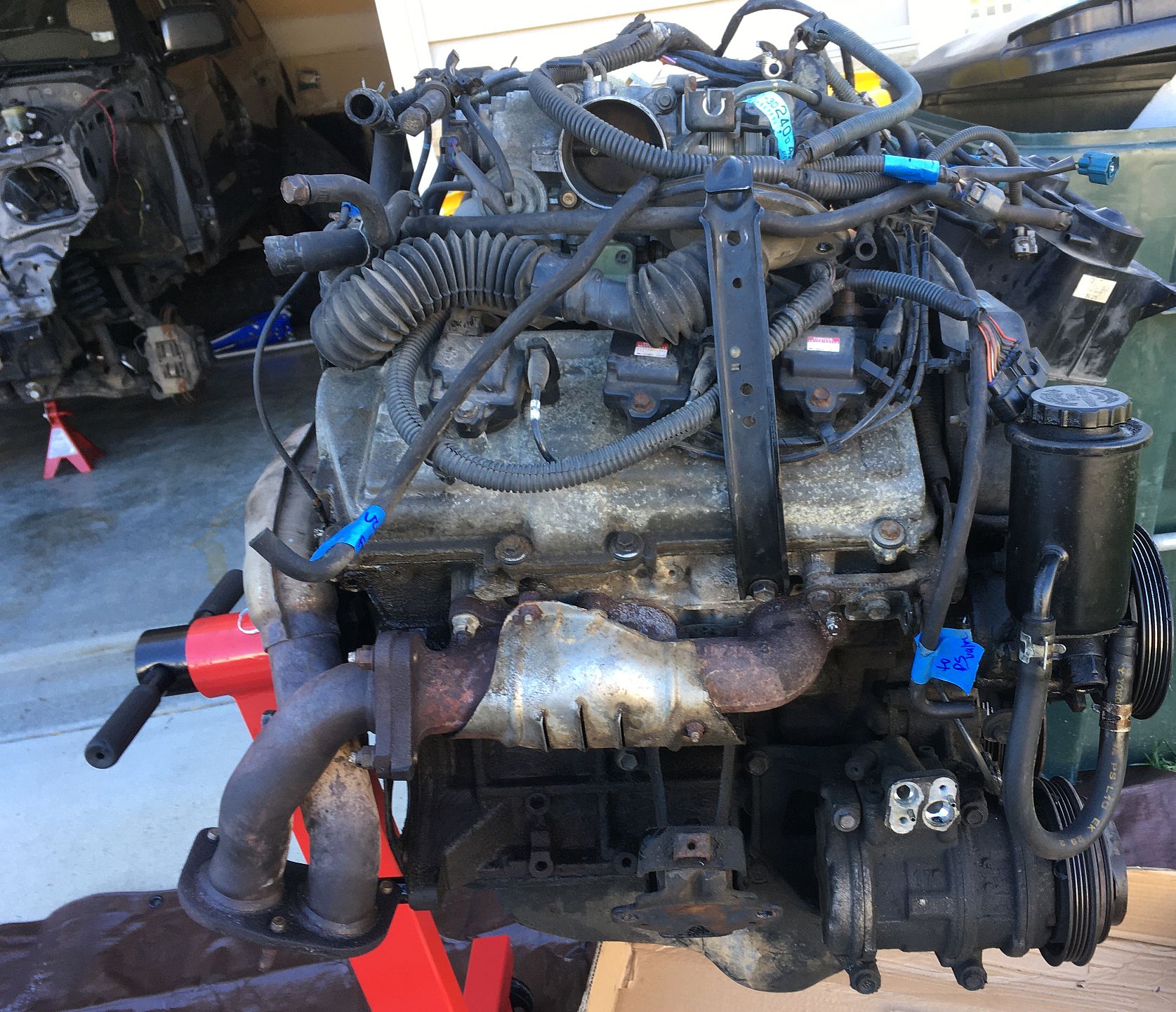 Just got my Toy Only Swaps crossover pipe, so the 3.4 is ready to go in. I should have my swap harness in tomorrow. Replaced all the seals in the engine and also did the R150's front seal and cover as it appeared to be leaking. 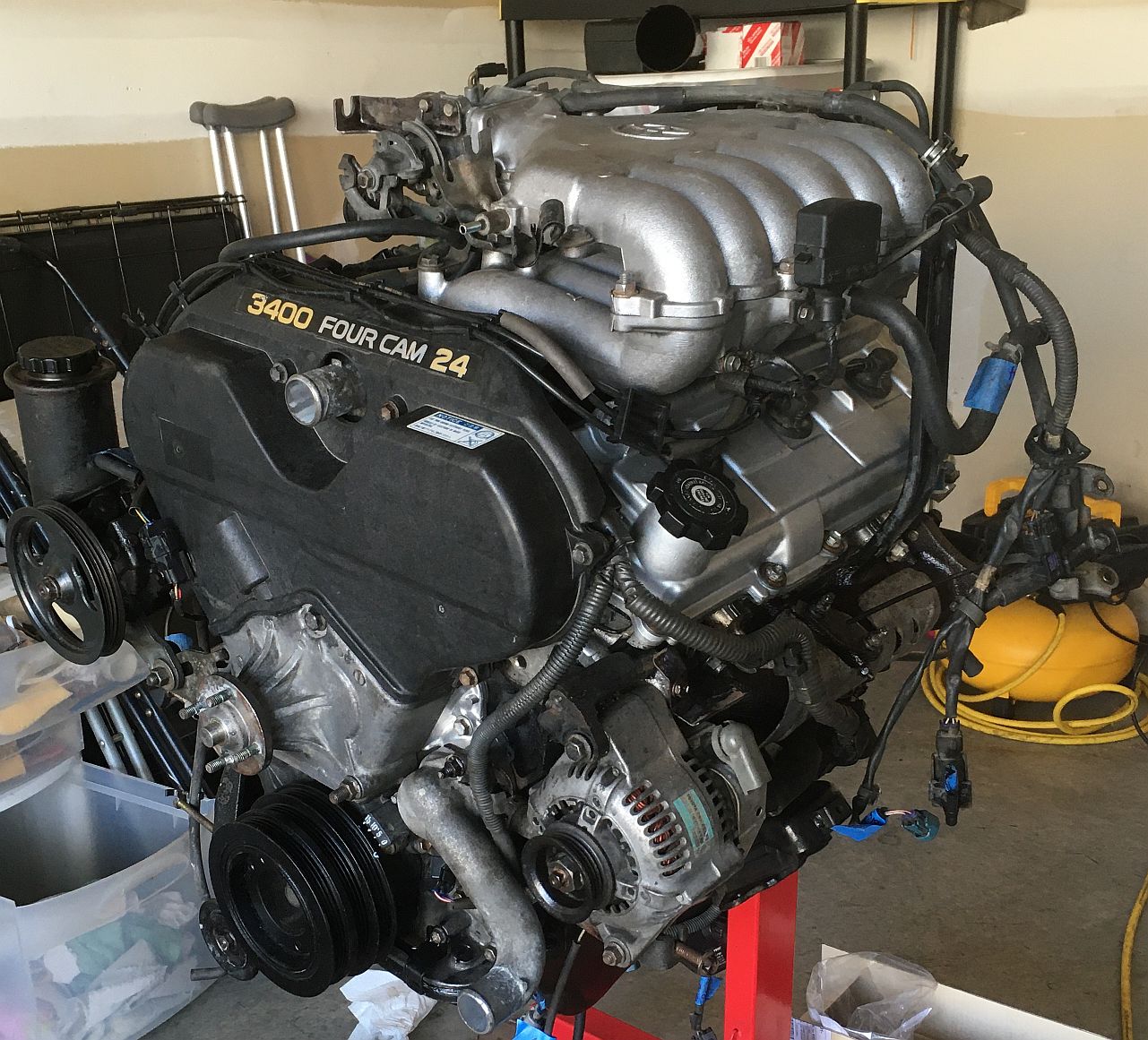 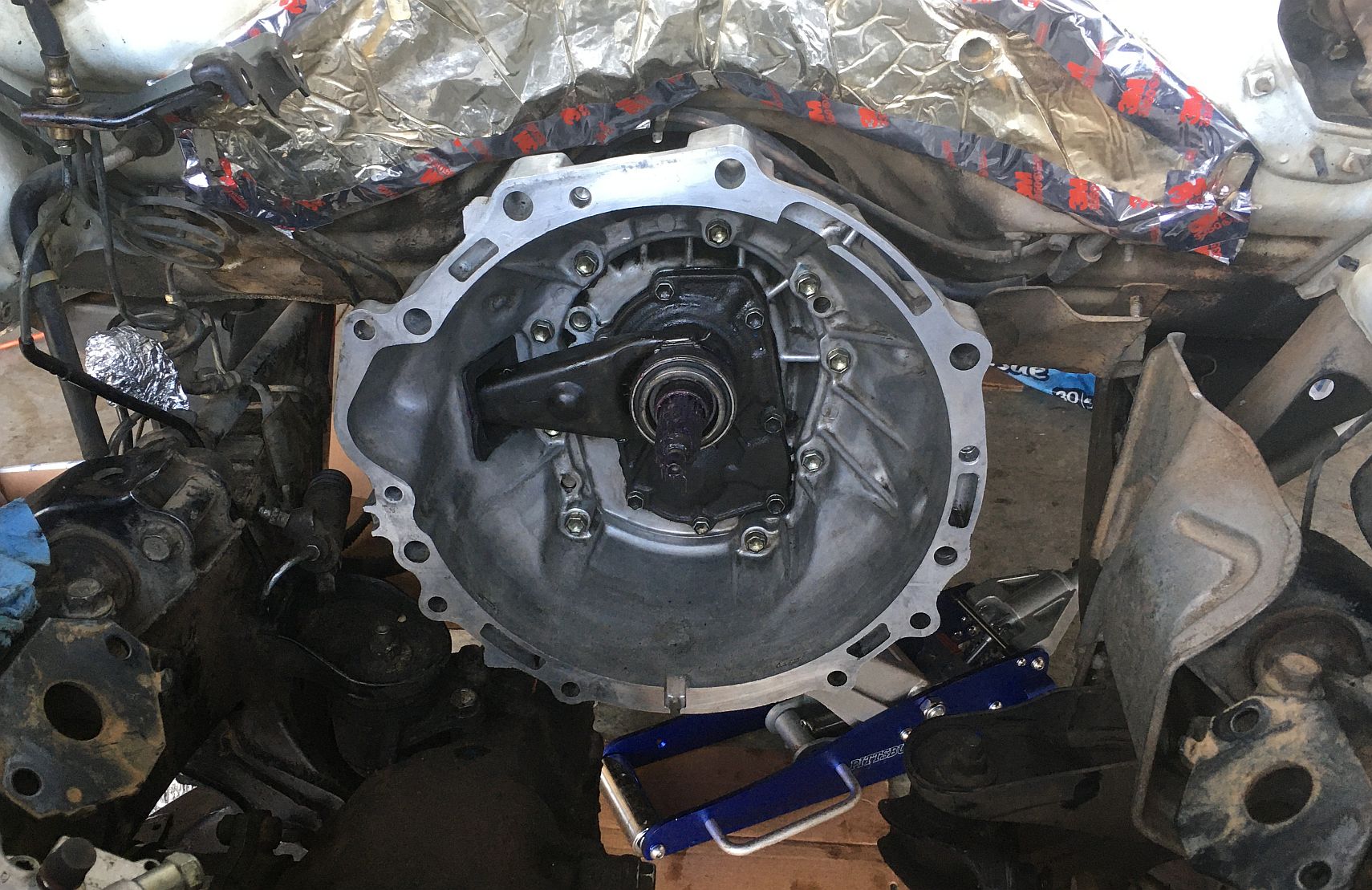 The 3.4 is in! Had some help from the wife manning the cherry picker. Having a third person would have been really helpful, but after close to two hours it's connected to the transmission and motor mounts are tight. The load leveler was good for adjusting left to right, but front to back was a major challenge. I ended up using a bottle jack to adjust the angle of the engine as I went in. It is quite tight. Now I just need my new swap harness. 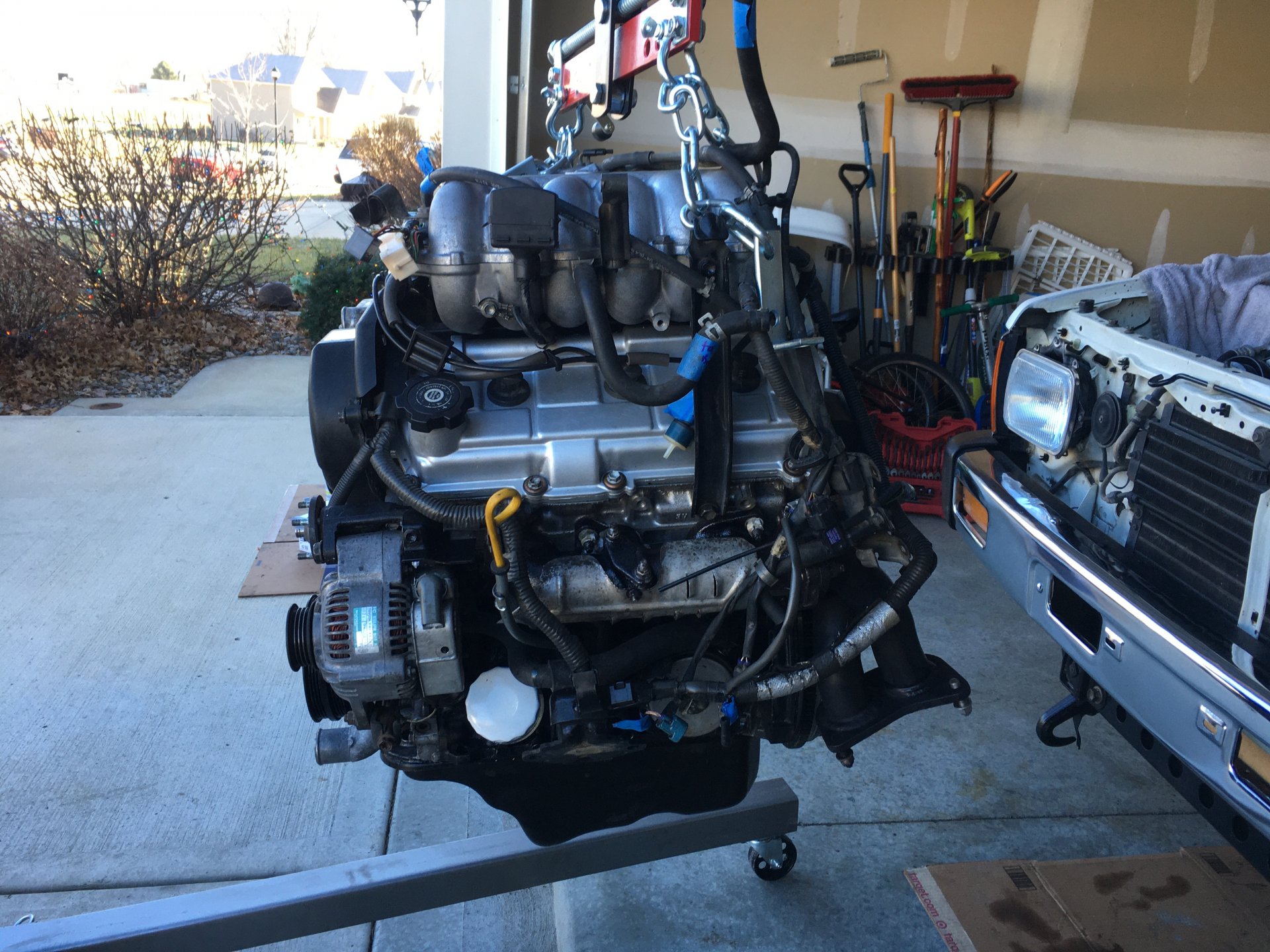 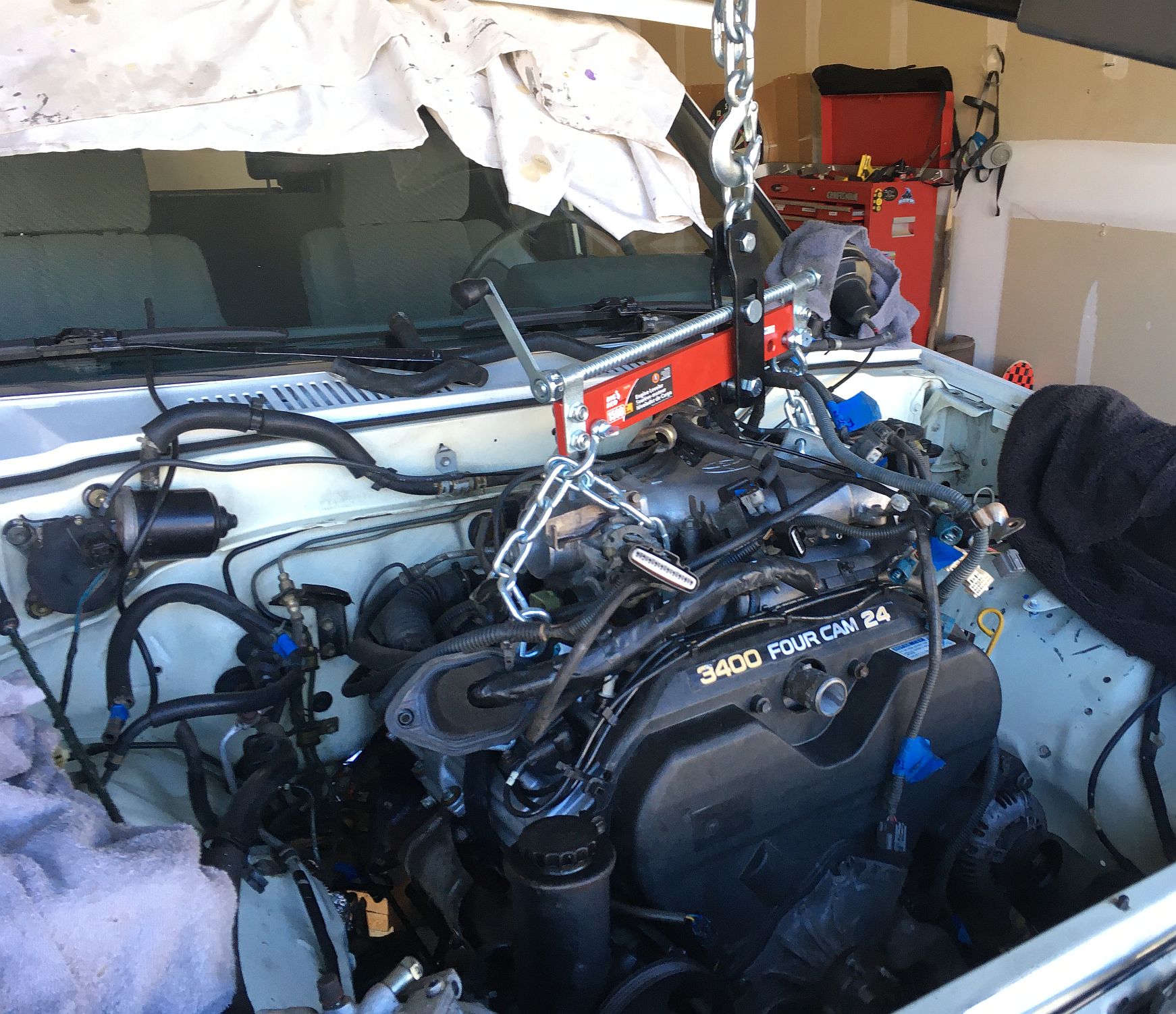 Was that a Harbor Freight engine hoist? How did it do with the 3.4?
You must log in or register to reply here.