I recognize several of you from the years on Mud.

First a bit about me: I am a 4th generation Colorado Native who married his High school sweetheart (after college). I have two grown daughters who also drive Toyota's and they often wheel with me. Together we have wheeled the Rubicon, South Dakota, All across Colorado and many trips to Moab. If this year you see a Red 200, White 100 and 3rd Gen 4runner, all built traveling down the highway, that is the Romer Caravan

In college I had a 74 FJ40. I bought it 5 years old in 79 and drove it all around Colorado and Arizona. After college I sold it and went through several vehicles, even a Jeep but they just were not the same. I would comment when I saw an FJ40, and in 2003 my wife told me to go get another one.

I bought a 1977 FJ40 and this thread describes the build.

In 2011 I bought a 2004 100 series. Great truck and enjoyed doing the Maze trip and all the rest of our Utah and Colorado spots. Here is the build thread. The 100 is a great platform.

In 2013, the kids were grown up, out of college and owned their own houses. Now the toy budget was increasing. I made good on the promise I made to myself and bought and built another 40 just the way I wanted it, Fuel Injected V-8 with some modern accessories. My wife refers to this as my baby

I would still have the 100 today if I hadn't upgraded my camper and imported a new 2016 Kimberley Karavan. Here is the story on that. I had no issues towing my previous trailers and the Kimberley Kamper up the Mtn passes. The Karavan doubled the weight and I could feel the difference. It would have been fine, but who likes chugging up a mtn pass. Several folks were nice enough to give me their comparison in a 100 vs a 200 and that sold me.

Doing lots of research on this great forum I narrowed my choice to a 2013 to 2015 based on features and finally wanting a cruiser that was still close to new. After building the 40, buying the Kimberley, a new 2016 would have been too much for my bank account. Besides I did not like the rear screens on the seat backs.

I had always bought my rigs out of state looking for the best deal and quality and was surprised to find a great deal on a local cruiser at Carmax. A 2014 with 25K miles still under factory warranty for $58K.

I have been waiting to sell my 100 to do the majority of the mods, but have started with what I took off the 100. My plan for modifications is as follows:
ARB Front Bull Bar (I have a 12K WARN winch)
Slee Sliders
Slee Skid Plates
BP-51 Lift (edit went with the standard OME Lift)
Dual Battery Setup (IBS system from my 100)
ARB Storage Drawers (From my 100)
Hamd and CB Radios (From My 100)
ARB Front and Rear Lockers
Rear Bumper (debating between ARB or waiting for Slee's)

Here is what it looked like when I bought it 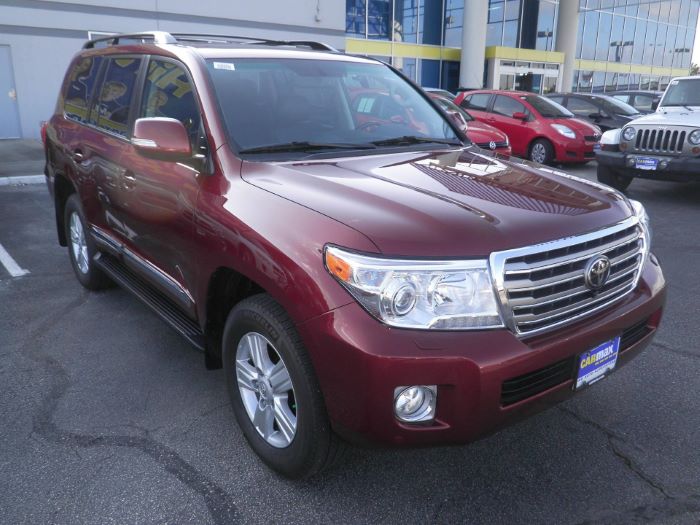 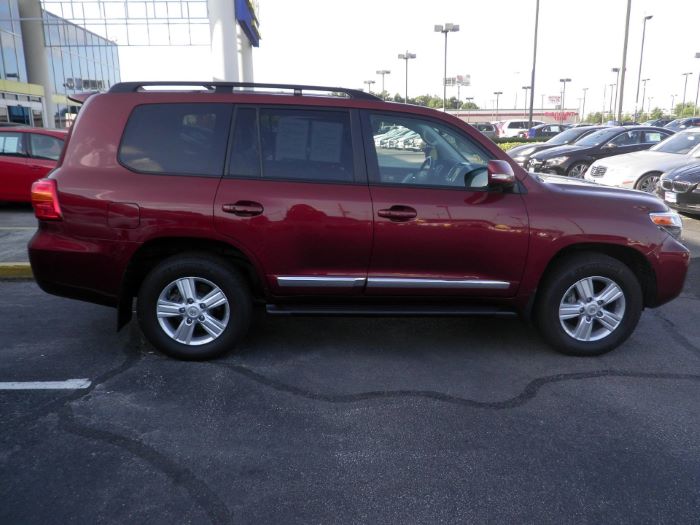 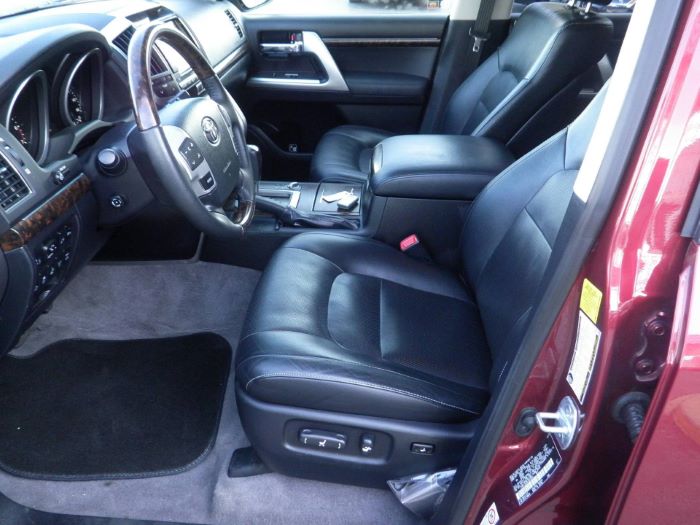 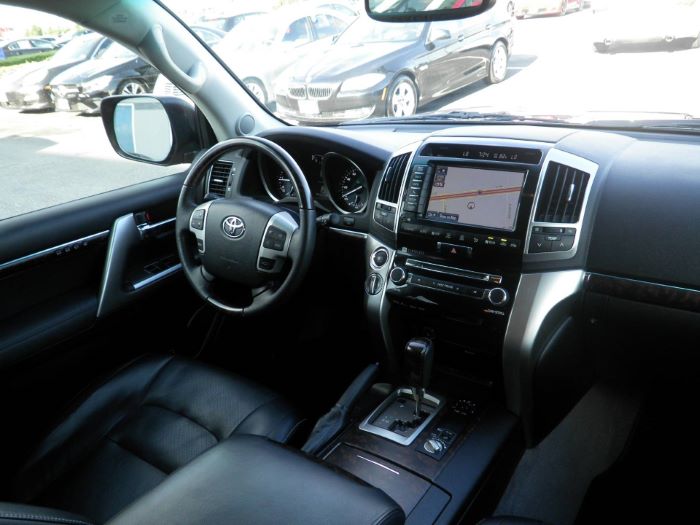 Tires and RIMs make a big difference. I moved the Toyo AT IIs from my 100 along with aftermarket rims 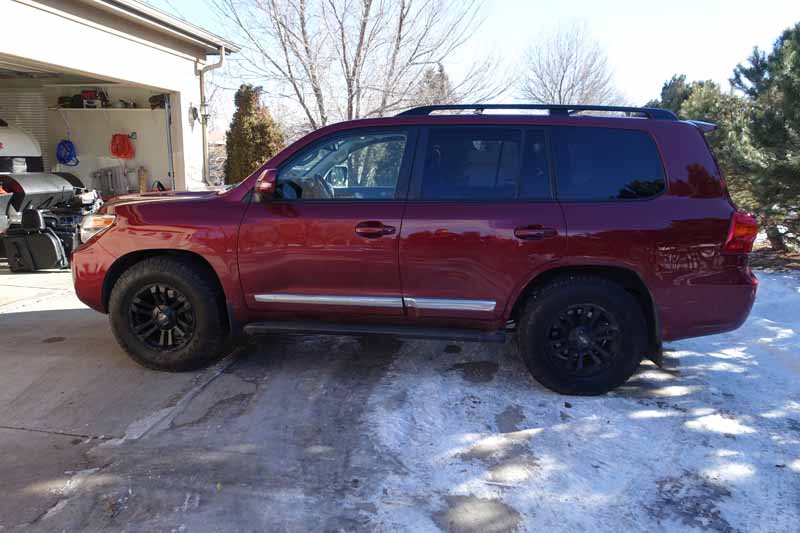 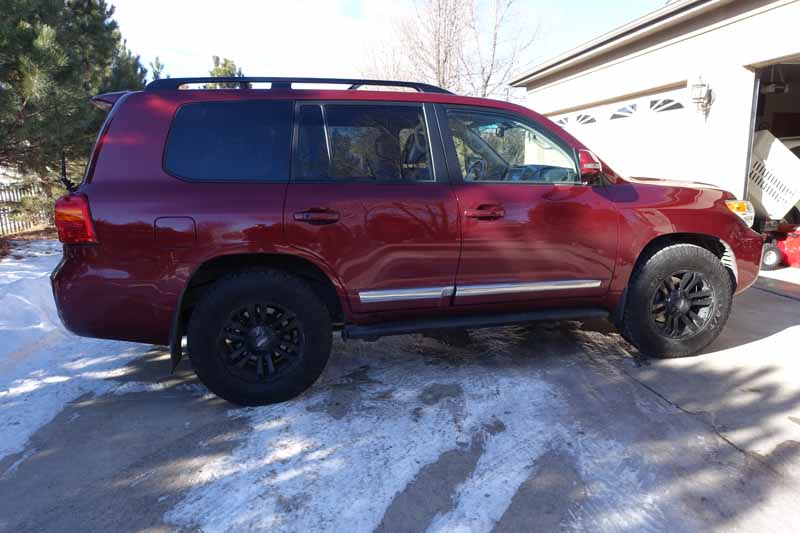 I installed my ARB drawers from my 100. The wheel wells are tighter and I had to shave about an inch off the trim kit 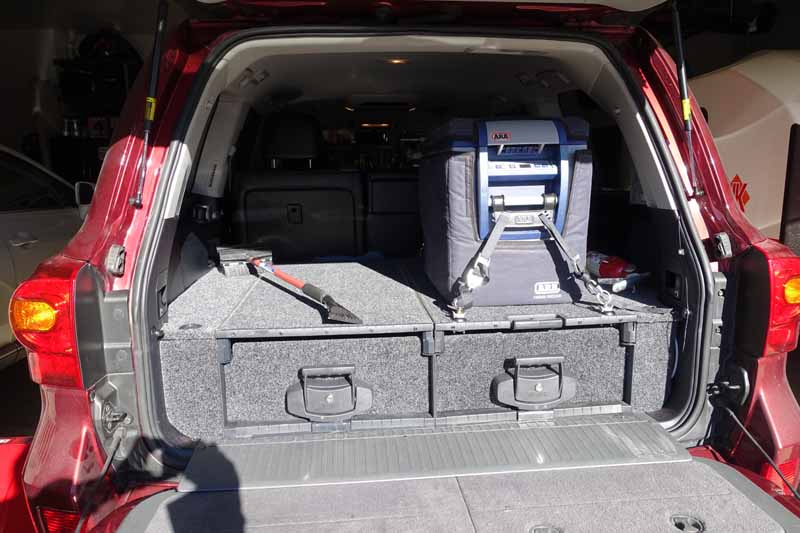 Next cam the Ham Radio. I installed the Yaesu FT-7800 that has been in my 80 and 100. Great Radio. Problem is the mount wouldn't work for the antenna. I went to HRO and found a mount that works on the hatch below the glass 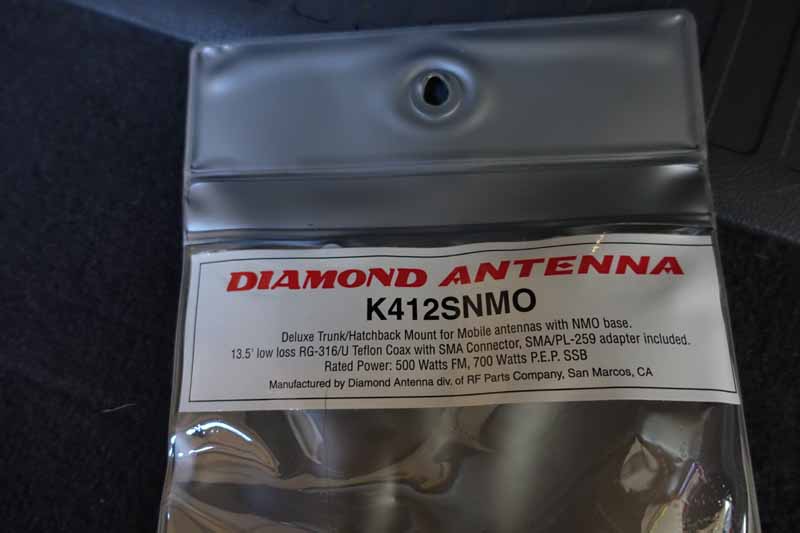 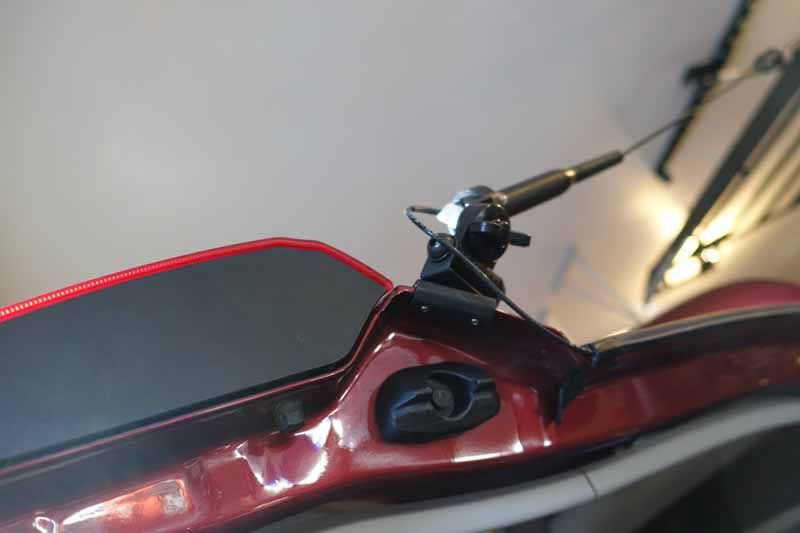 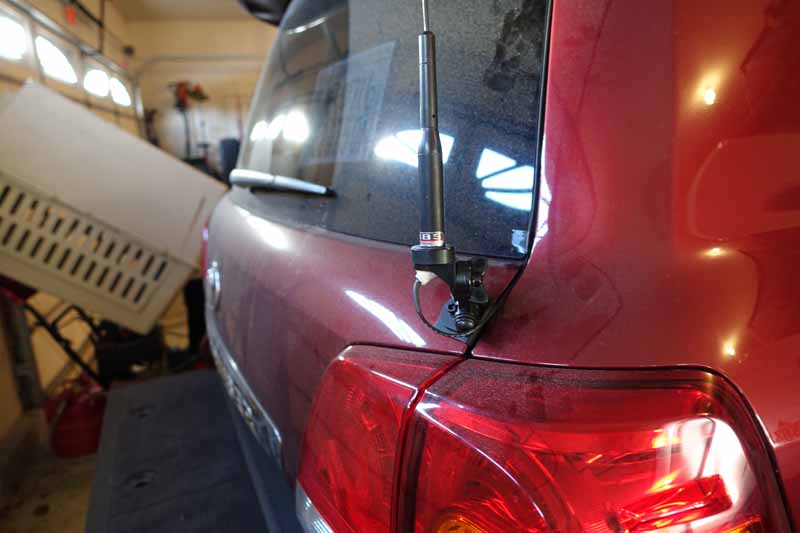 The 200 has an advantage over the other rigs I have built with the space set aside for wiring. I went ahead and strung wire for the HAM, CB and AUX power outlet 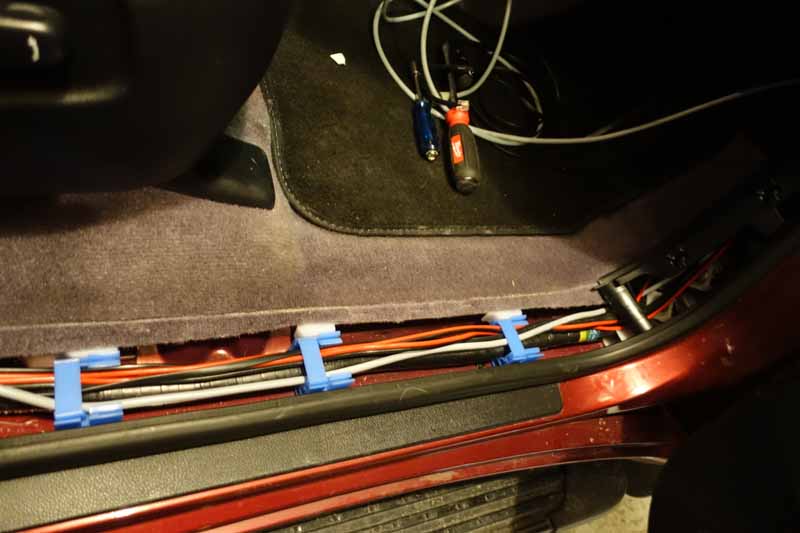 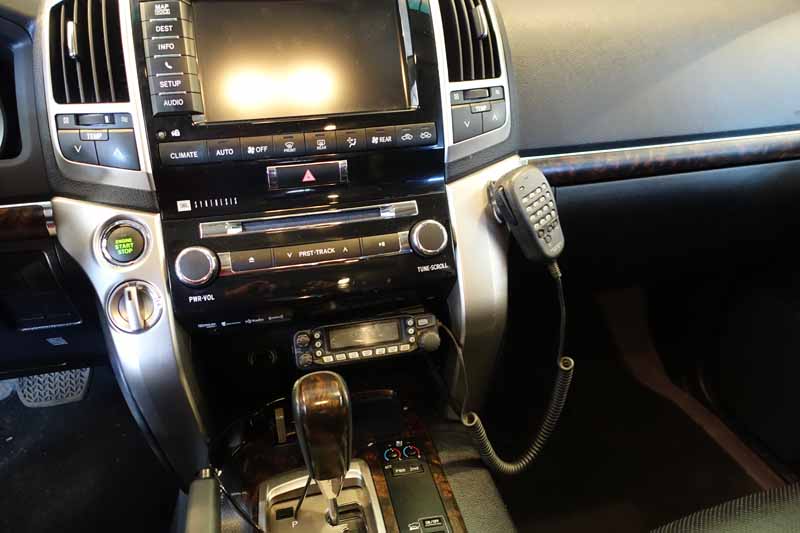 I put the Radio head unit under one of the Drawer Trim Kit panels along with the 12V outlet for the Fridge. Was amazing to me there wasn't a 12V outlet back there 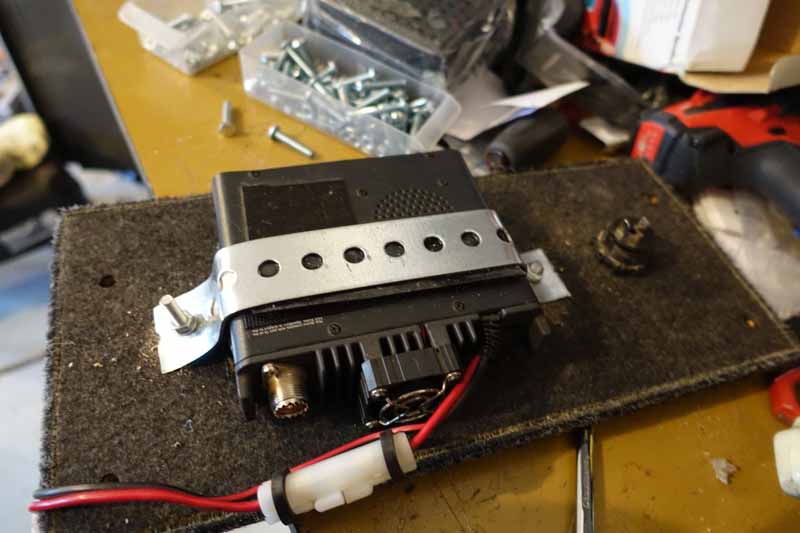 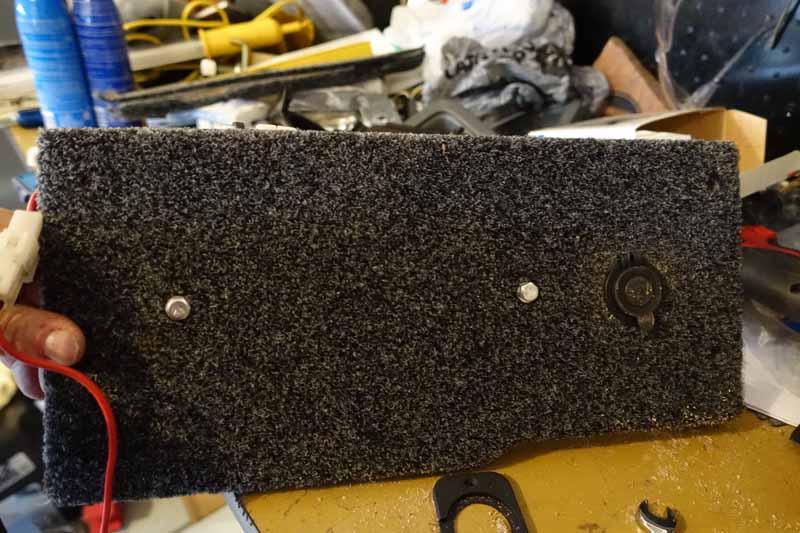 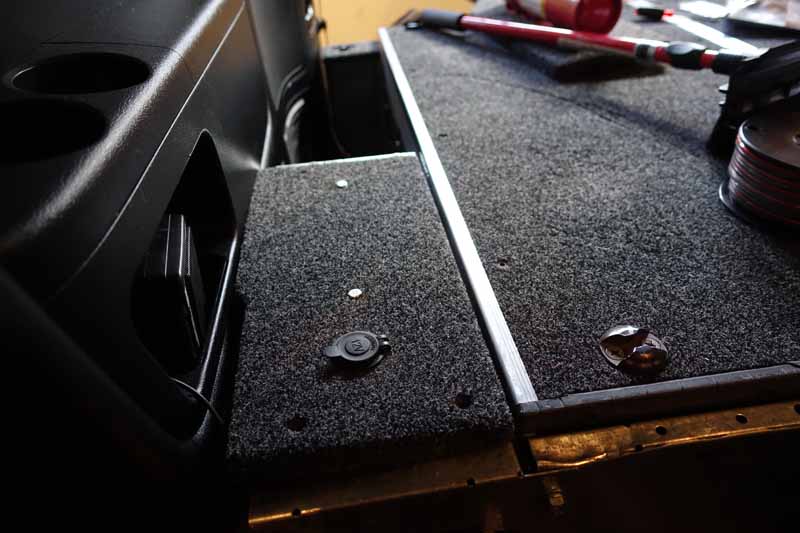 Looking good! I like the color of your truck; same as mine!

Romer said:
I installed my ARB drawers from my 100. The wheel wells are tighter and I had to shave about an inch off the trim kit

Did you use the same trim kit from your 100?
Which ARB fridge size is that?

It is the same trim kit. The passenger side fit well. The drivers side required adjustment with a jig saw to change the curve and take about an inch off the width. Brackets fit fine though.

Romer said:
It is the same trim kit. The passenger side fit well. The drivers side required adjustment with a jig saw to change the curve and take about an inch off the width. Brackets fit fine though.

I talked to Christo and the BP51 lift is on back order. Bummer I will have to wait for the majority of the mods

Romer said:
I talked to Christo and the BP51 lift is on back order. Bummer I will have to wait for the majority of the mods

We discussed the bumper and I am going to wait for his. He felt I the ARB wouldn't hold up under the kind of wheeling we like to do. Like a run on Hells Revenge in Moab
Click to expand...

Markuson said:
That's why I'm waiting too... My only worry now is that Slee is gonna have a LINE of us waiting by the time it's ready to go...
Click to expand...

Romer said:
We discussed the bumper and I am going to wait for his. He felt I the ARB wouldn't hold up under the kind of wheeling we like to do. Like a run on Hells Revenge in Moab
Click to expand...


Romer, did Christo have a guess as to when he'd have his rear bumper ready? I'm also waiting on this.
Mostly Stock 8/69 FJ40, it’s alive!

Rigger said:
Romer, did Christo have a guess as to when he'd have his rear bumper ready? I'm also waiting on this.
Click to expand...


Christo responded in another thread last week to inquiries by showing a photo of a bare LX rear end without the bumper cover...letting us know it's some time off yet. We all want to know, but all we know is that it's coming at some point. Beyond that? Only Christo knows.
Last edited: Jan 19, 2016
Markuson’s Instagram
Rides on: 4.88, OME BP51/2724 SPC UCA, 285/75/17Ridge on RW, SpiderTrax 1.25”, ARB F/R Lockers
Armor: TJM T13, BudBuilt Skids/shock+RLCA guards, Slee RearBump/Sliders,
Elec/Light: Warn 12S Platinum, Redarc, 31/35 AGM, Baja Designs LP9, IPF Hi/Lo, Yaesu400XDR
Etc: ARB Draw/TwinComp/Snorkel, NLuna60Twin, ,LRA24gal, Prinsu RR
Sold-Built 99LC

Rigger said:
Romer, did Christo have a guess as to when he'd have his rear bumper ready? I'm also waiting on this.
Click to expand...

I am not going to speak for Christo. He knows there is a need, he explained the challenges and his plan is to get it to a finished product as soon is reasonable considering he wants to validate the quality for the Slee name.

When I swapped the rims I only got 4 turns of engagement on the lug nut. I went to Discount and they said 4 is fine per their specs. I am not comfortable with 4, maybe I am being anal. With the new Toyo AT's I would stick to an 18" rim. The TRD Pros are two pricey, but also look like the older Tundra wheels just powder coated black. I do like the Fueal Anzas and sent Kreiten a PM to see how he like them. RIMs and specs still confuse me. What specs should I look for in a RIM to fit the wheel and also ensure I have more turns on the lug, say at least 8.
Ken Romer ~ K0ROM
2014 URJ200 - ARB Drawers, Front Bumper & Lockers, Slee Rear Bumper, Slee Skid Plates & Sliders, BP-51's, Gamiviti Rack, LRA Aux Fuel Tank, Android Head Unit, IBS Dual Battery
1973 FJ40 - V8, NV4500 Tranny, Holley MPFI, Orion Tcase, Trollhole Soft Top, ARB Lockers and a few other toys
2016 Kimberley Karavan, 2019 BMW Z4
Previous: 04 UZJ100 - Lifted, Locked, Armored with other toys, 97 LX450 , 77 FJ40 , 74FJ40

I decided to go with the TRD Tundra Wheels and ordered 5 on ebay for less than $200 each delivered. I am debating on Powder coating them all black before I put them on, but I kind of like the two tone 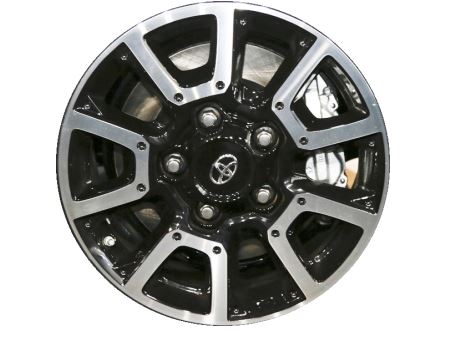