Hey Everyone, I ended up pulling a trigger on my first Cruiser in January. I have always wanted one, so when a semi-local on popped up, I decided to go for it even though I knew it needed some work. It is kind of a running project at the moment, but more on that later. My main use for the rig will be casual cruising and yearly camping trips and brewfests. 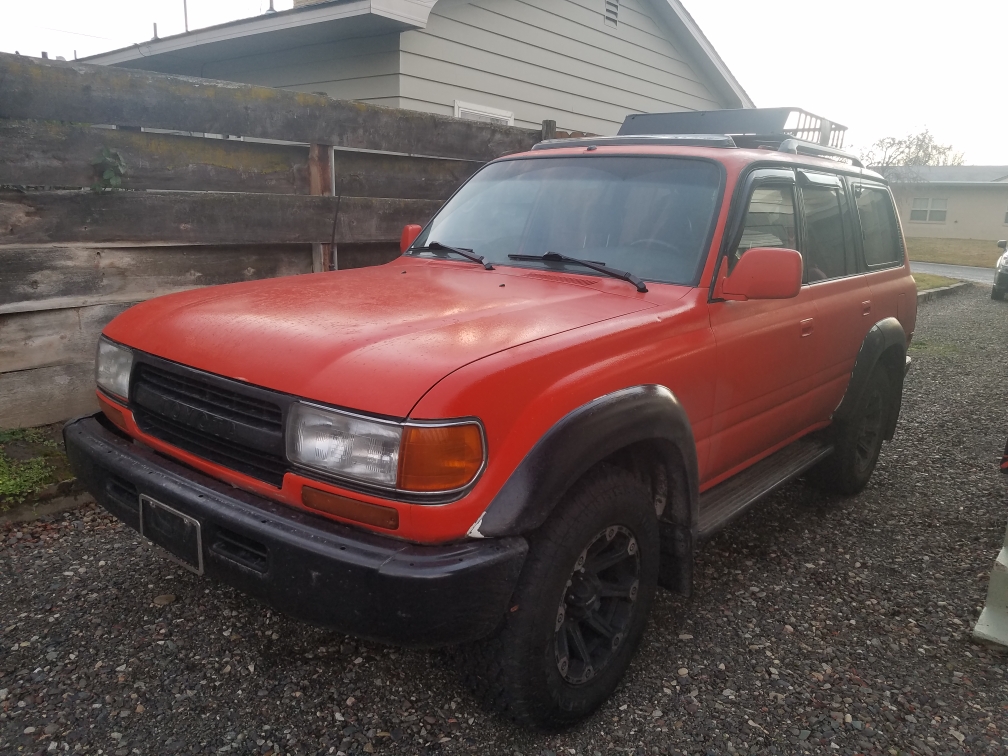 The Body is straight and fairly complete, but there were some obvious things that needed work. The previous owner had good intentions ( I think he may be a user on here), but some of the recent work was not done to my general standard of care. The first (and most apparent) being the orange coating.

Mechanically the cruiser appears to be fairly sound. There are some rough spots underneath that need a little rust treatment to prevent it from becoming a problem, but the motor and transmission run strong. The head was replaced about 15 to 20k ago, and it seems to have been done well. When I first got it, it was having some transmission glitches like it not shifting to drive from Park after you had been moving. I knew this was a glitch, and I decided to take a little gamble on it. First thoughts were solenoids based on some of your threads here, but the culprit was ultimately the NSS, which a mechanic buddy (he specializes in older Toyotas) and I went through some lengths to figure out. Thanks to everyone on here, I was able to provide some pretty solid info that was valuable during our diagnostics. Once we sorted that out, replaced the crank seal, installed a new oil pan, fixed a leaking caliper and twisted brake line, and flushed the transmission, my mechanic is feeling good about how it drives.

With me feeling like I was not absolutely screwed from a potential gamble, I could move into fixing some of the cosmetic grievances I had with it. The orange coating ended up not bonding very well in some places, so before I knew it, the rig looked way different after a day or two of peeling. I also removed the roof rack, the rails, and the connectors. All of which were not in great shape. Basket could probably be reused but the mounted rack is junk. 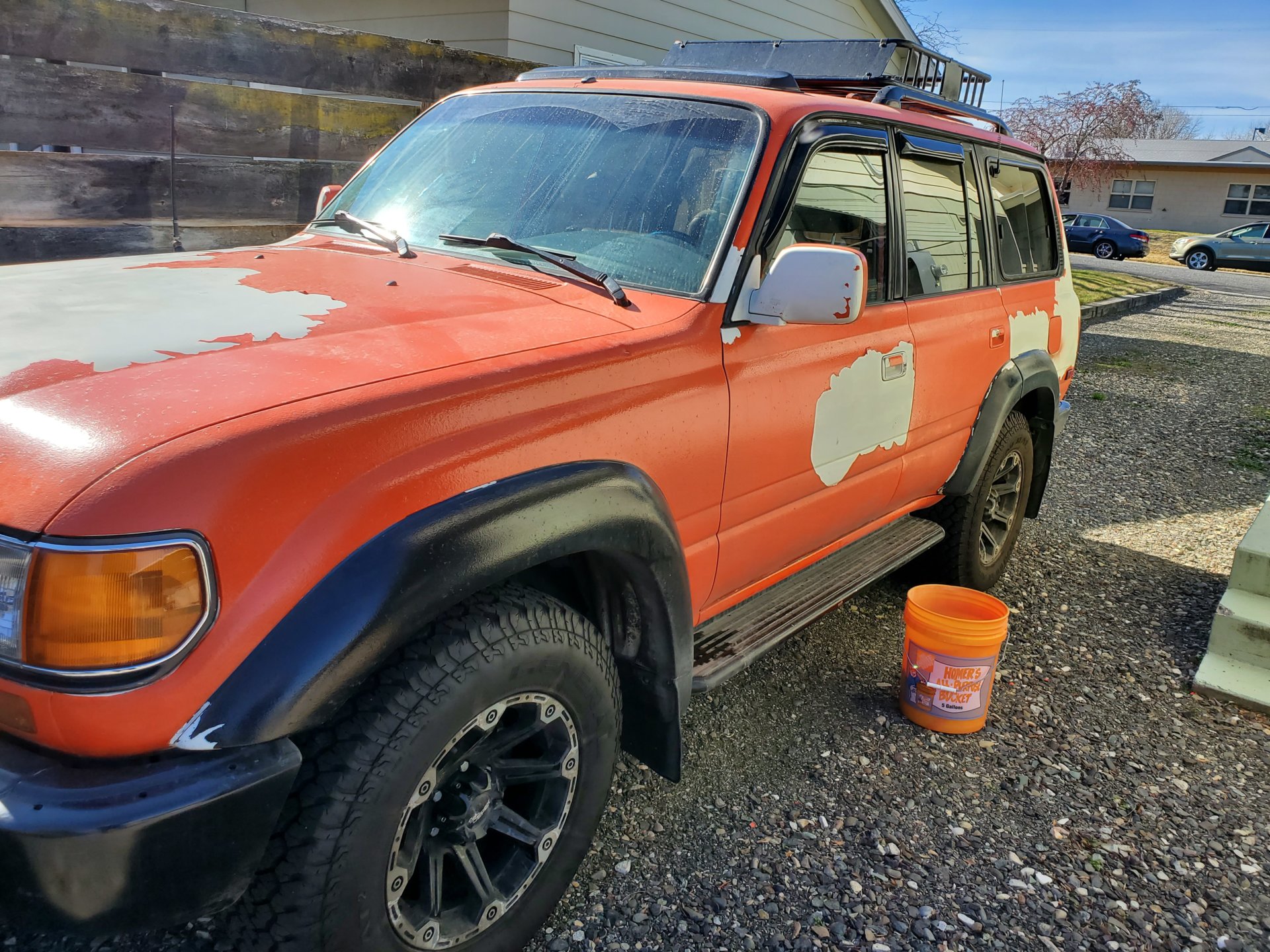 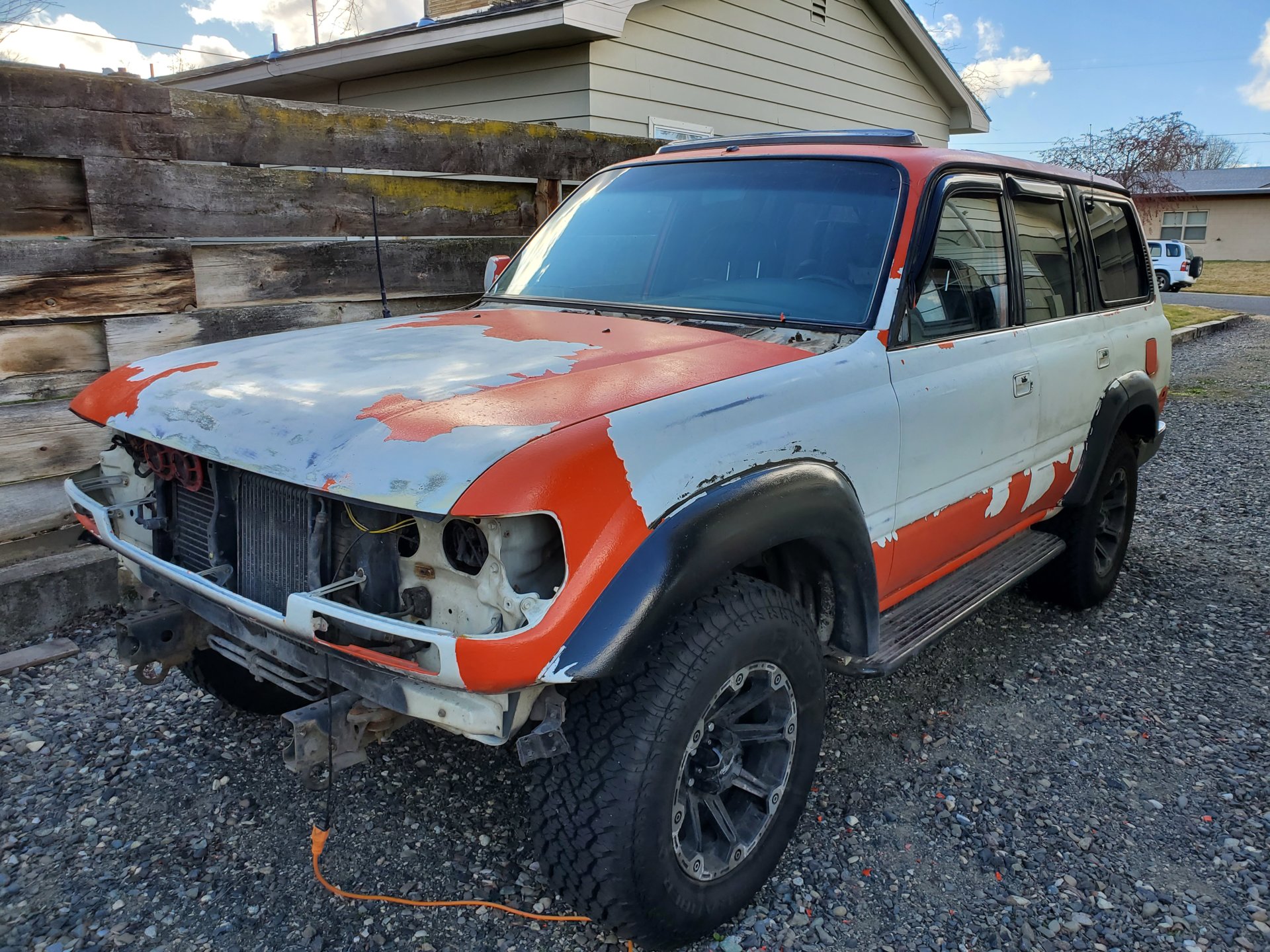 As I continued down the rabbit hole, I realized I was going to need to get complete removal of the coating and start from scratch to get rid of some surface rust and feel good about the new paint's life. Enter the pressure washer. After a day of pressure washing, most of the original paint was exposed. 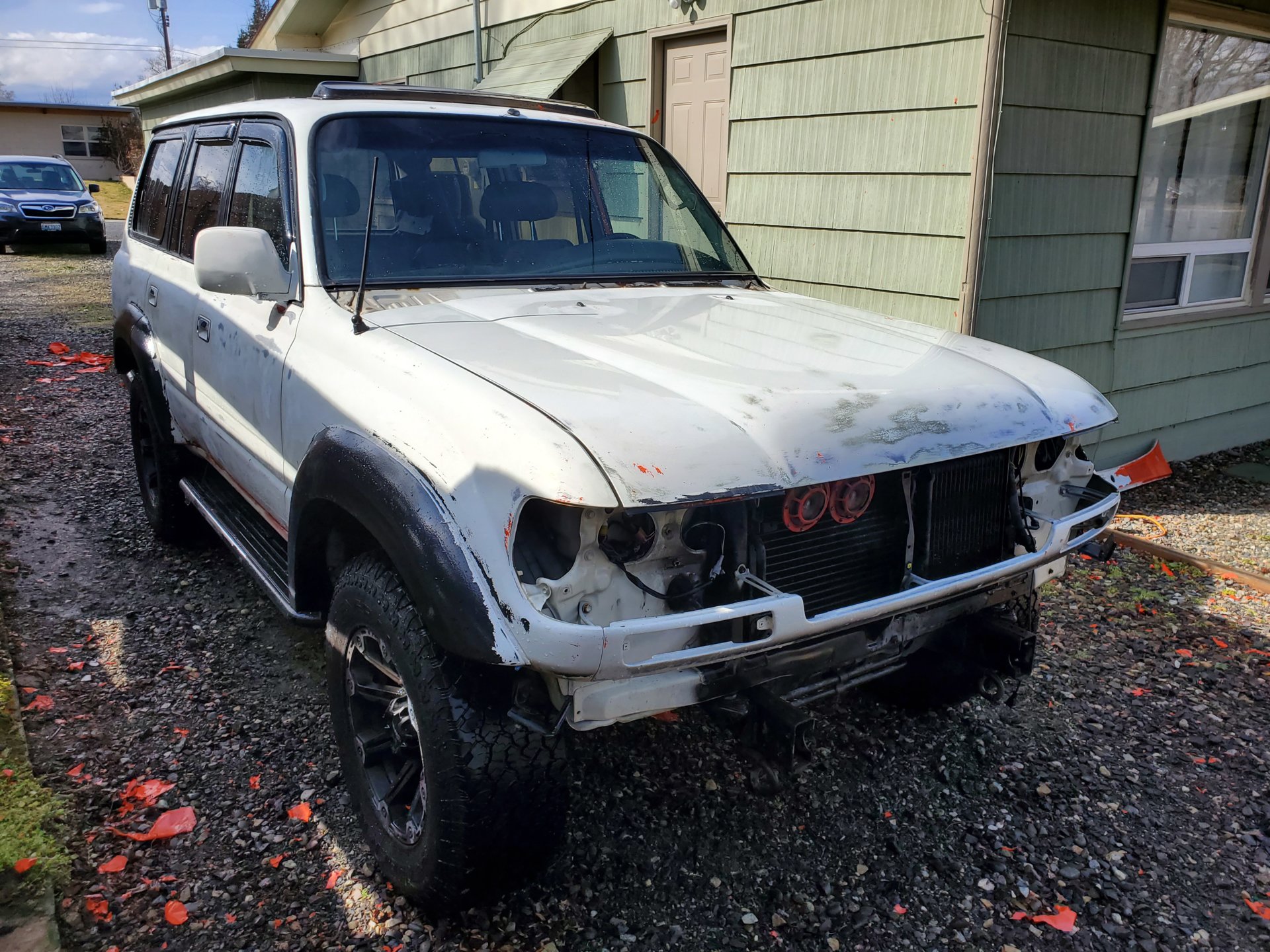 The remaining tough spots are being worked with an orbital sander and some patience (of which I am not really known for). I am going to bare metal where I need to and sealing with primer until I can get an even sand and primer over the whole Cruiser. Since sanding sucks, I added some other items to my list, like getting those ugly running boards off, taking off the fender flares for prepping, and even the fenders themselves. 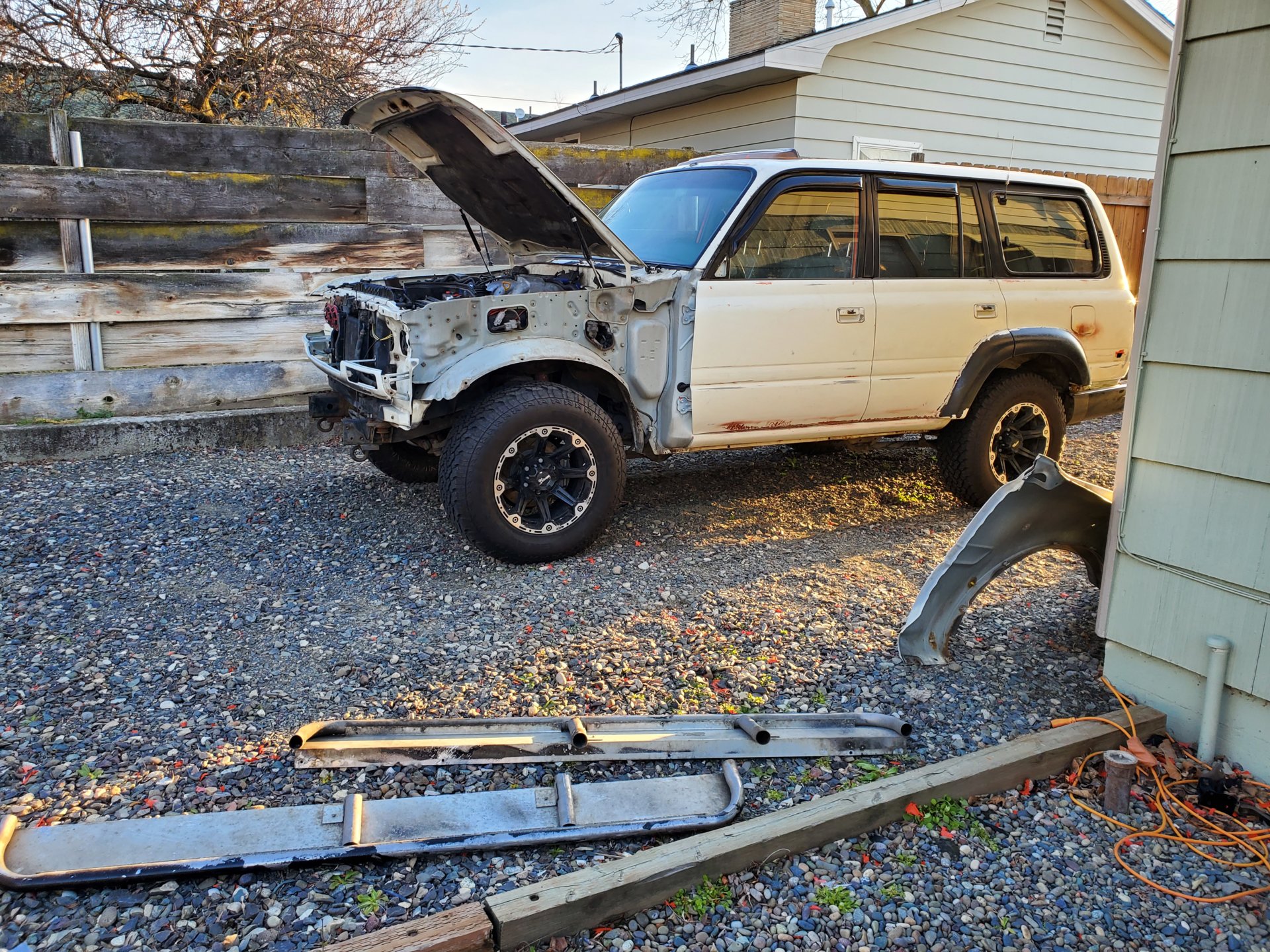 I have gone through a number of bolts that have been in poor condition, and I ended up having to grind a few out to get rid of the running boards (good riddance). The fenders ended up having a couple of rust spots that need some attention under the flares, so I am glad I ended up taking them off. As it sits today, it is looking much different than when I started, but necessary.

Moving forward, I have a few questions for the masses here:
Are there any vendors that sell bolt kits for these cruisers? The more I dismantle the more I see that the old bolts need to be replaced (fenders, flares, etc.), and I want to make sure I do it right. I know there are places I can buy bolts individually, but it would be slick if there was somewhere I did not know about to buy in bulk.

What is the best place to purchase the trim pieces and items like window seals? I have browsed the forum a bit, but it seems like most of the normal sites do not really offer these anymore.

Anyone have any parts cruisers somewhere around Washington for future reference? Once I move into the interior there are some things that could use replacing, and well as normal things like mudflaps, etc.....

I am excited to be into the project, even if it has taken more of a life than I thought it would. Other things I will be moving through: Window regulators and motors, door lock actuator, fixing the speakers (mounted poorly), replacing the exhaust (it is custom and riddled with holes), looking into some new bumpers, and just giving it an overall cleaning.

Appreciate all of the information that everyone has provided this far. It is a great forum with a ton of info. I am hoping to have this Cruiser back together and at least mostly primed in the next month or so so that I can start to enjoy driving it more.

McMaster Carr sells bolts in bulk. Tacoma Screw also has them. In a pinch I find them at my local Oriellys. Not OEM but they all work. Really only difference is the head size is larger. You can find them on Amazon too but watch the grading, most tend to be cheapos'

I got all my trim at toyota overstock. Norwalk Toyota also sells it online, think they are toyotapartsgiant.

No parts Cruiser here. What part of Washington are you in?

I've recently done most of the items on your moving through list so if you need any advise reach out.
9

I am down in the southeast corner, Clarkston, WA. Appreciate the info! Once I get into some of those I will definitely pick your brain a little bit. All together it's a little overwhelming but doing one thing at a time has been manageable so far.

flushed the transmission? How many miles are on this?

I hope you got a smoking deal because that looks like alot of work.

Search the parting out threads for some deals on parts. The window seals can be bought OEM still. They are pricey but don't waste your time with used ones.

Another idea for dirty and rusty bolts/hardware; I found a Cruiser at a pick-n-pull and grabbed as many bolts that I could of various sizes and lengths from anywhere and everywhere on the vehicle.

I then sent those out to be gold/cadmium plated which was about a 100 bucks for a couple of pounds of hardware.

Now, as I take off old hardware i use the ‘new‘ hardware to put it back on. Eventually I will send off the dirty stuff again to be plated.

It has just over 250k miles. I picked it up for about $5k and the mechanical side has at least been verified as solid. It was a decent price for the western coast states at the miles and clean carfax based on local research, but I am not saying I would not have loved a better deal, haha. I am doing a little more exterior work than I thought, but it is all generally work I enjoy doing and learning a bit about. It's a labor of love for sure.

Good to know about the seals. I am probably a little way out on doing those but that is valuable information.
C

PartSouq Auto Parts Around the World

Buy your own parts here cheap. Just make a list and try to order as much as you need because shipping is a little bit more but you can still buy parts and have them shipped for almost half price.

Shipping is quick too, the coronavirus may slow things down right now.


cme4lyt said:
Another idea for dirty and rusty bolts/hardware; I found a Cruiser at a pick-n-pull and grabbed as many bolts that I could of various sizes and lengths from anywhere and everywhere on the vehicle.

I then sent those out to be gold/cadmium plated which was about a 100 bucks for a couple of pounds of hardware.

Now, as I take off old hardware i use the ‘new‘ hardware to put it back on. Eventually I will send off the dirty stuff again to be plated.

Used bolts are fine in some cases but if it holds on drive train parts, mounts, or safety items go with new. So many of the bolts I have removed from mine have had the section reduced by rusting. Some barely noticeable but some were nearly half gone. One of the bolts holding on my transmission cross member, which are about 1/2" diameter, was down to less than 1/4" at the shank.

Clarkston isn't too far from me. If you're ever headed over to the Tri-Cities shoot me a message.
S

I use Toyotapartsdeal.com. You just need part numbers and should be good to go. Less expensive shipping than partsouq

SteelHunterFJ80 said:
I use Toyotapartsdeal.com. You just need part numbers and should be good to go. Less expensive shipping than partsouq
Click to expand...

I'll keep them in mind my next parts order. Thanks

Rubber products are consistently a better deal from Partsouq. Do your price comparison.

I use Partsouq to verify part numbers, as I find their site more accurate. Then I confirm the parts through McGeorge Toyota. I live in the Kansas City Area, where one of the main Toyota distribution centers is. I can buy most of my stuff through McGeorge and have it delivered to my door for less than I can buy it at the dealership 5 miles from my house, and they honor a local 'Mud discount (local).

You can buy your hardware through Toyota or Partsouq. I have placed a complete order for ALL my bushings and hardware for the suspension through Partsouq and saved over $300 vs McGeorge, which was $150 less than my local, and that's delivered to my door.

Are you in Spokane? I'm sure I saw this truck on I90 going through Post Falls a couple months ago.
9

moclakens said:
Are you in Spokane? I'm sure I saw this truck on I90 going through Post Falls a couple months ago.
Click to expand...

I picked up the rig from Spokane, so that makes sense. Hard to miss in that color. I am a couple hours south of there myself.
You must log in or register to reply here.

B
Rebuilt OEM Starter, tries to engage but engine will not turn over - loud noise only