Using the great info here, this is the setup for my instrument lights:
Two 74-CWHP3 (cool white) for the Cig lighter and Glove box
Four WLED-GHP5 (green) for most of the instruments (1 Inclinometer, 1 gas,temp,volt,oil, 2 speedometer)
One WLED-GHP9-T (green) for the Tach based on @rcmccars recommendation, makes it as bright as the combination gauge and Speedo.
I purchased one 3022-G9 (green) for HVAC controls, but I am going to switch it for a 3110-W10-CB: White 31mm because it is brighter and has a wider beam angle. The other factory lights that originally have the green condom should be purchased in green but this light doesn't have a rubber, so it should be clear and then when it passes through lenses that determines the color, unless of course you are changing the color of the lights of your dash to something other than green. I realized this because the red/blue of the temp controls on the HVAC looked purple/turquoise because it was mixing with the green LED (maybe you will able to see in the photos). There are green lenses underneath the light bezel to give off a green glow and there is a plastic light dissipating piece that I wonder could be missing from other Cruisers and may cause that hot spot that @klinetime574 was talking about. I also had to file down the points at either end of the light to get it to fit top-to-bottom. 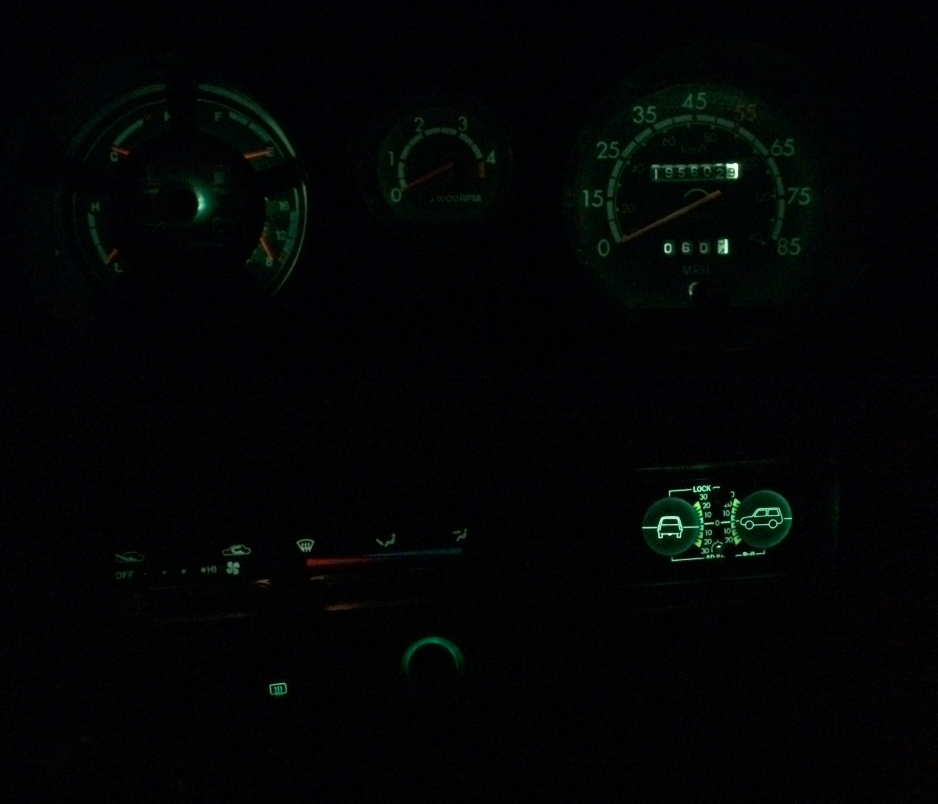 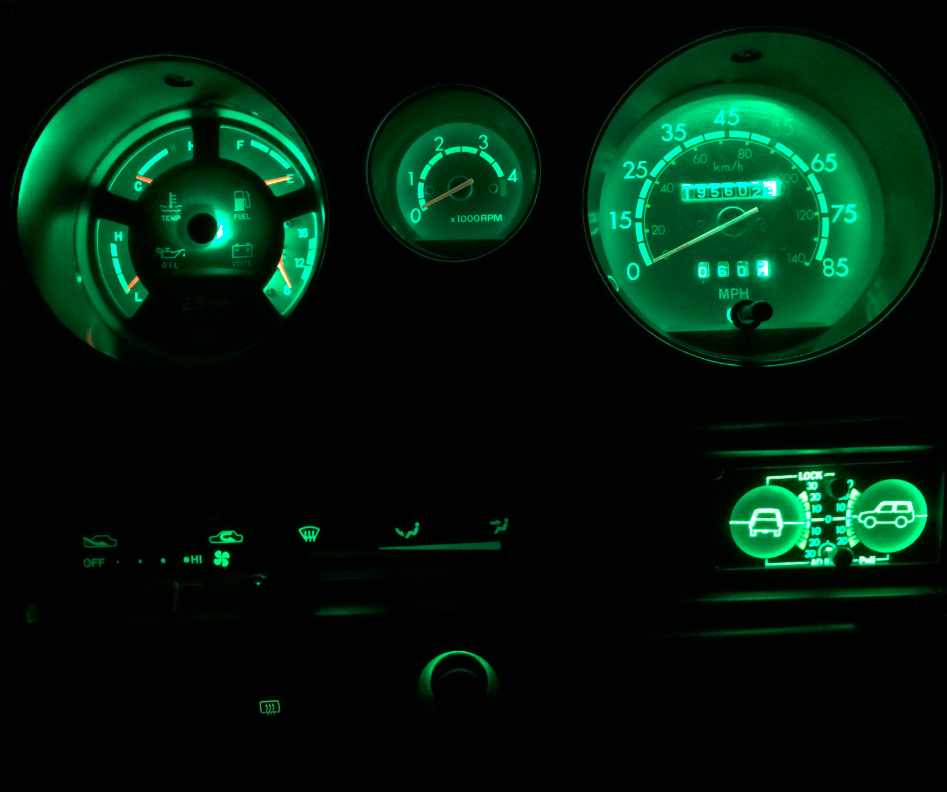 I'm very happy with the result. It irritated me how dim the lights were, so this modification was very worthwhile. I bought all the lights from superbrightleds.com and my only complaint would be how hard it is to get behind the instrument/gauge cluster. I didn't want to mess with disconnecting the speedo (because I didn't want to mess it up and I also couldn't get the cable off) so my hands and arms are all scratched up. I tried removing some duct work for easier access, but I ended up probably doing it the hard way.

@the gimpey one Thank you! The inclinometer is flashy but useful because it is bolt on (with some wiring fabrication) and it has a dash clock which is really important to me because I want a factory look. That means having the stock radio (my next LED endeavor) that does not display the time like most all aftermarket stereos would. I bought it about 7 years ago from SOR when I was just dreaming about FJ60s and it sat on my desk until now.

@4wheelfever Great work on the LED swap, looks really good. I have dimmer bulbs in my multi-gauge/tach/speedo and wish they were brighter sometimes.

For the HVAC I have the same green brick you have pictured above. Try turning it around backwards and see if you like it. Worked for me. I believe I left the white diffuser out though, put that away with some other factory odds and ends in a box.

This thread and other mud LED threads are great. It set me on my gauge LED quest also.

I tried every LED combo and most colors that I thought I could tolerate.

My final favorite combination of bulbs after lots of testing is the regular ole incandescent 194 stock bulbs in green condoms for all the gauge bulbs EXCEPT the tach.

The tach, as we know, is too dim. For the tach bulb, the Cool White LED ended up being my favorite. I got it at superbrightleds.com
Now the tach is a little brighter and whiter than the other gauges, and since it's the gauge I'm always glancing at, it's whiter color and brighter appearance really make it much easier see at night. 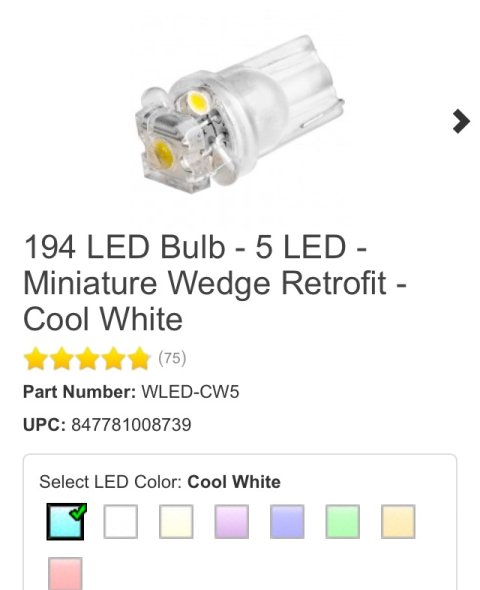 this mine whit that 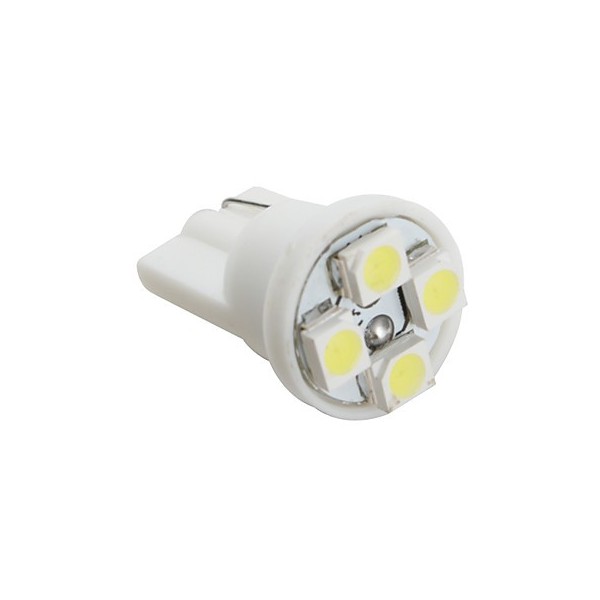 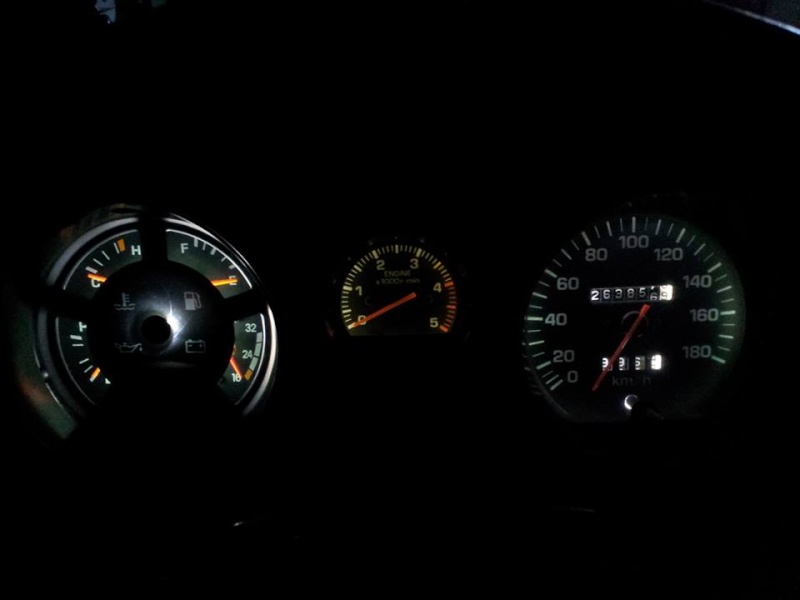 Just a FYI - I have a roll of aluminum HVAC/duct tape that is highly reflective; I've lined the inside of the tray behind the heater controls with the reflective metal tape, and it does a great job of lighting the heater controls and evenly distributing the light versus just a hot spot of light. Just apply the tape, turn the LED bulb so it faces backward, and reinstall the plastic heater control cover.

I want to say I did something similar but just used aluminum foil. I'll try to get in the garage and snap a couple photos


Sent from my iPhone 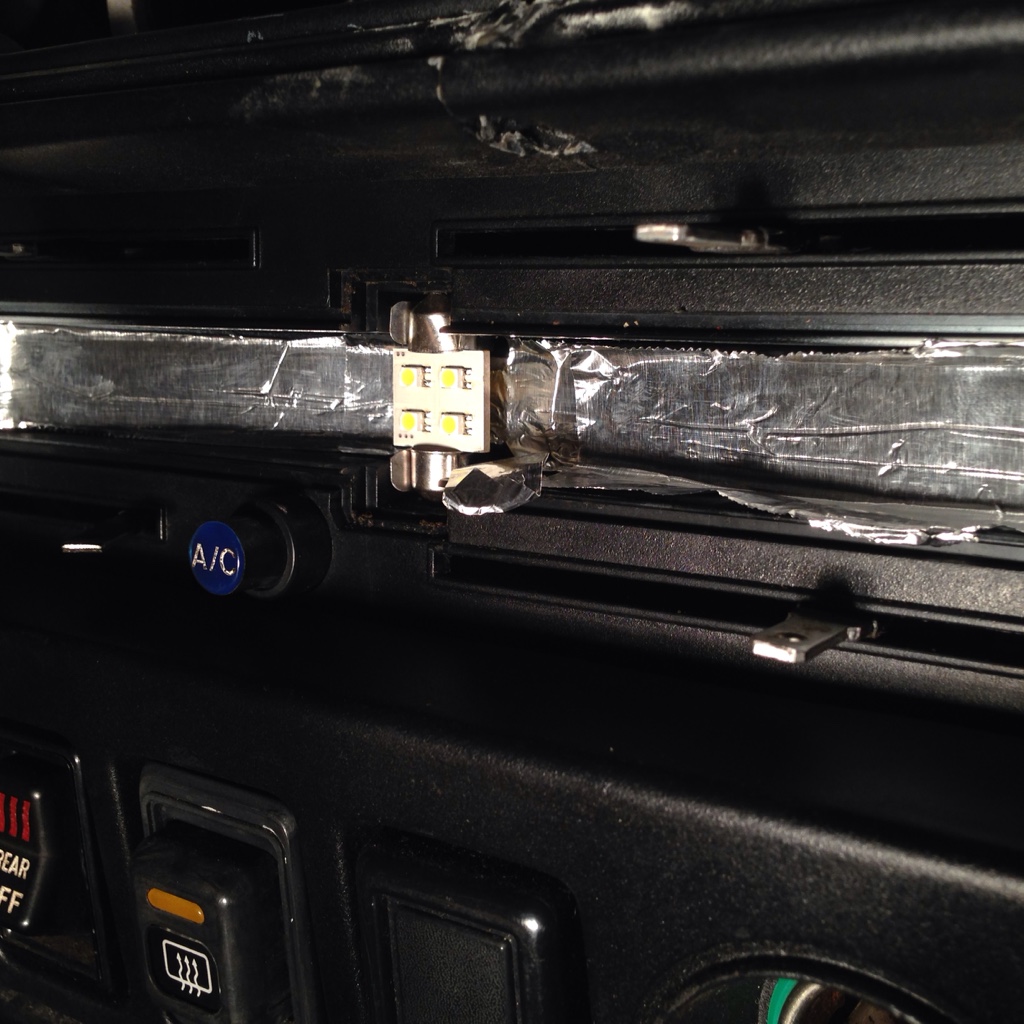 Here is the foil laying in the backlight trough. You can see the LED positioned in the center. 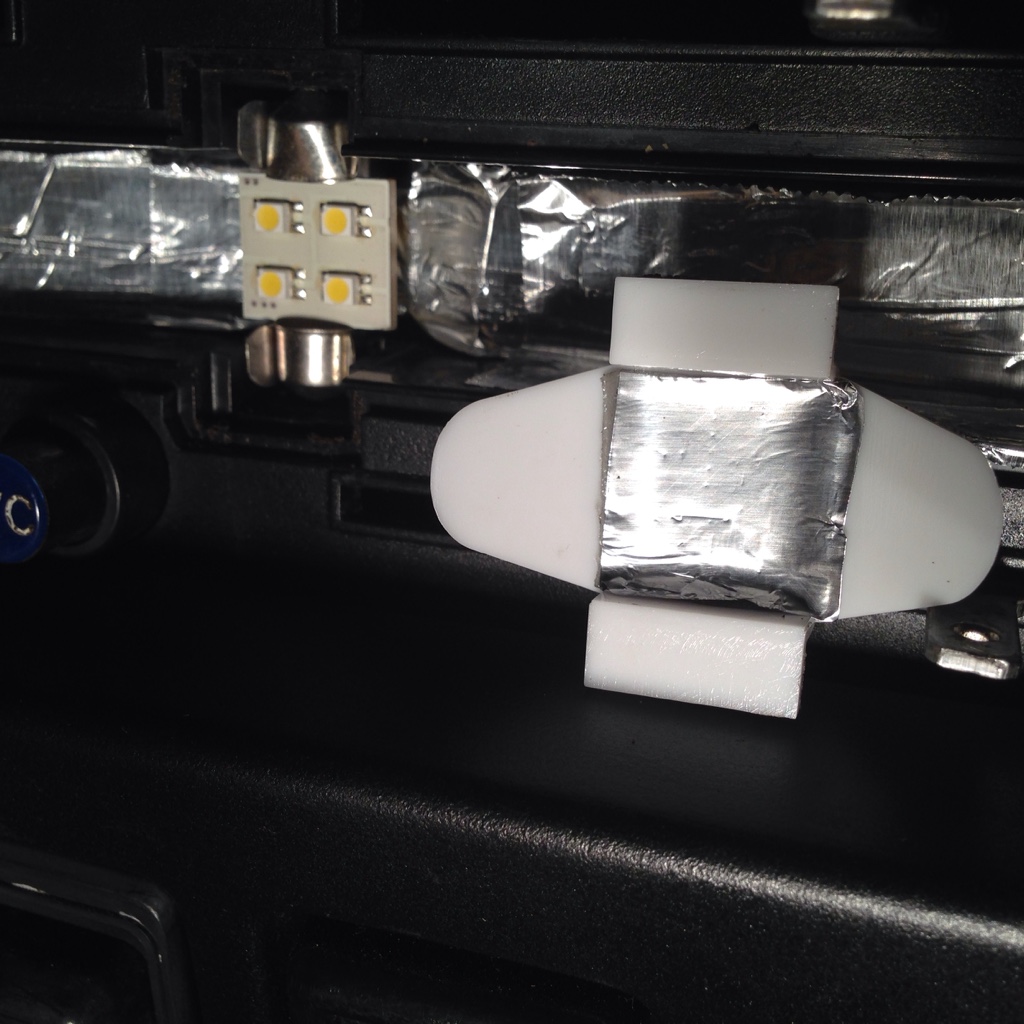 On the back of the white plastic "light disperser" it looks like I glued another piece of foil there.

It lights evenly across the whole switch face and doesn't have any bright spots or dark spots.

For me, the tach is the most important gauge. I want it to be the easiest to see at night and stand out. I think this cool white LED helps that.

Picture was taken in a dimly lit garage. You can see a light reflection on the gauge. I think these photos are pretty accurate as to how the gauges look.

The engine was off, so lights were running off of the 12.6V battery instead of 14.2V alternator... So gauge lights can be even brighter than shown when the engine is running.

Brand new clear incandescent 194 bulbs with green rubber skeeves are plenty bright for the two big gauges. I was amazed how much my old bulbs had dimmed with age.

What I (personally) didn't like about the green LEDs (and I tried them) is that their color spectrum is so narrow that the orange needles wash out to a faded orange and lose a lot of contrast. The green LED light is very saturated green and contains no orange or red in it. It's like green laser light. Everything was awash in deep green... even the white markings.

See the comparisons below on how different the orange needles look between incandescent 194 bulbs with green sleeves vs. green LEDs. (Picture borrowed from previous post). 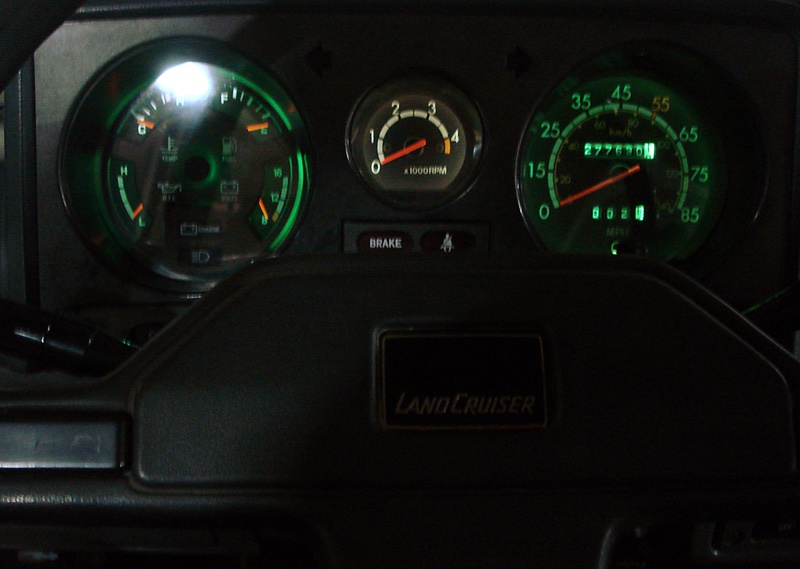 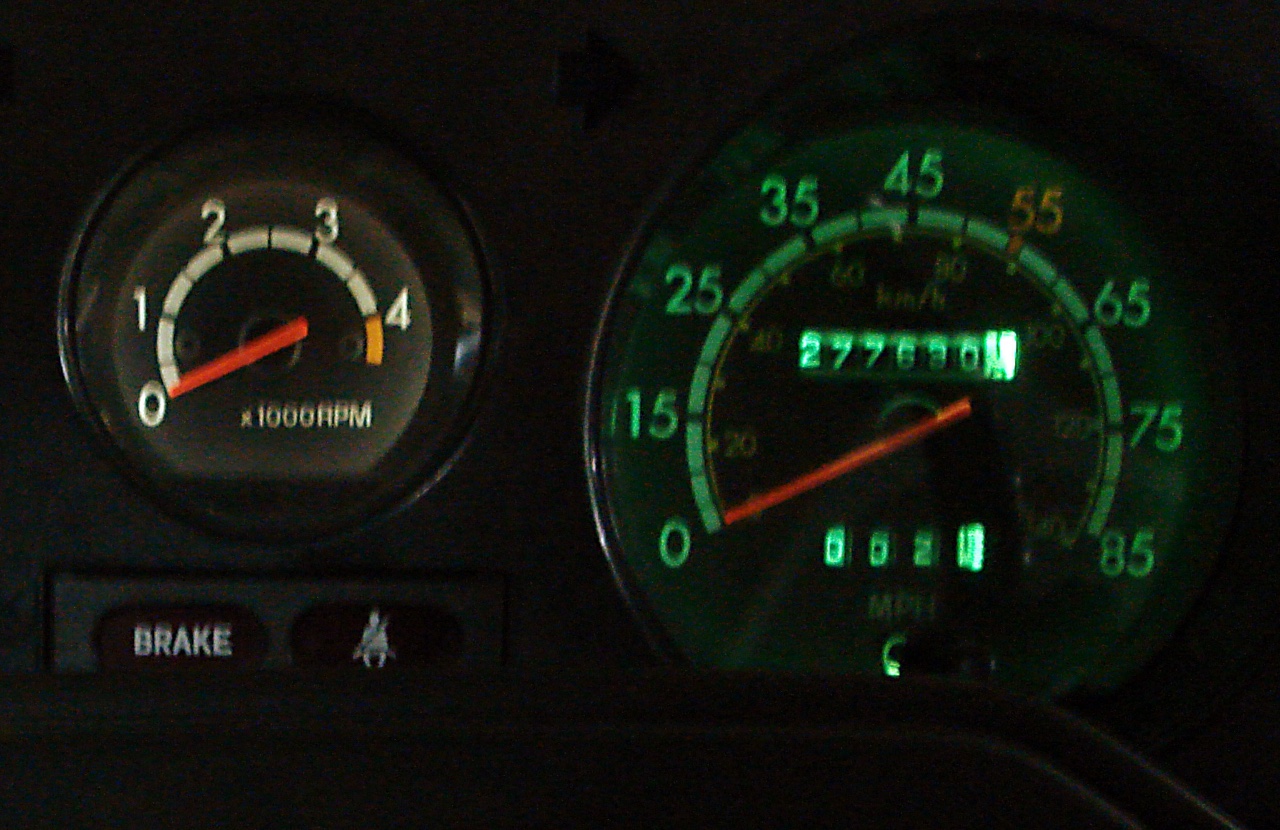 DIMMER
(the 194 bulbs could be dimmed to micro levels, lower than LEDs, but it didn't show up in the picture. So I turned up the dimmer a bit so you could see them. 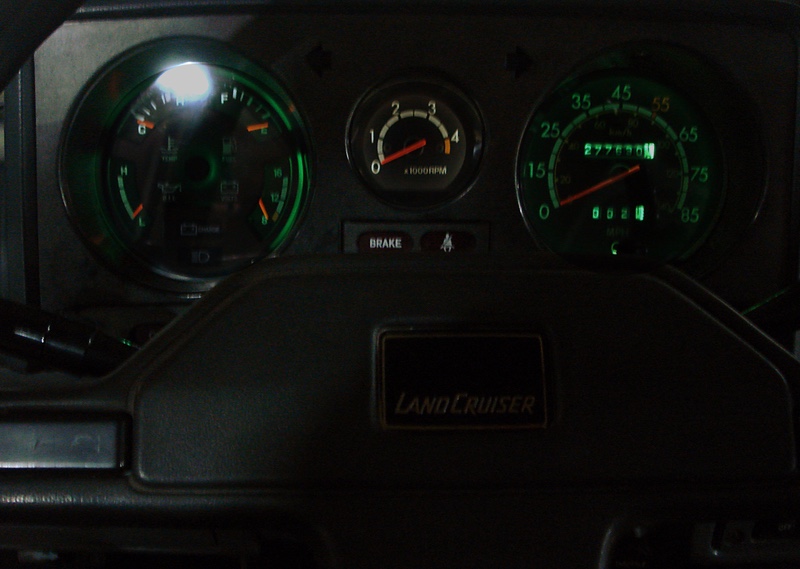 All green LEDs in all gauges below for comparison. Notice how the needles are washed out. (I like orange needles!) 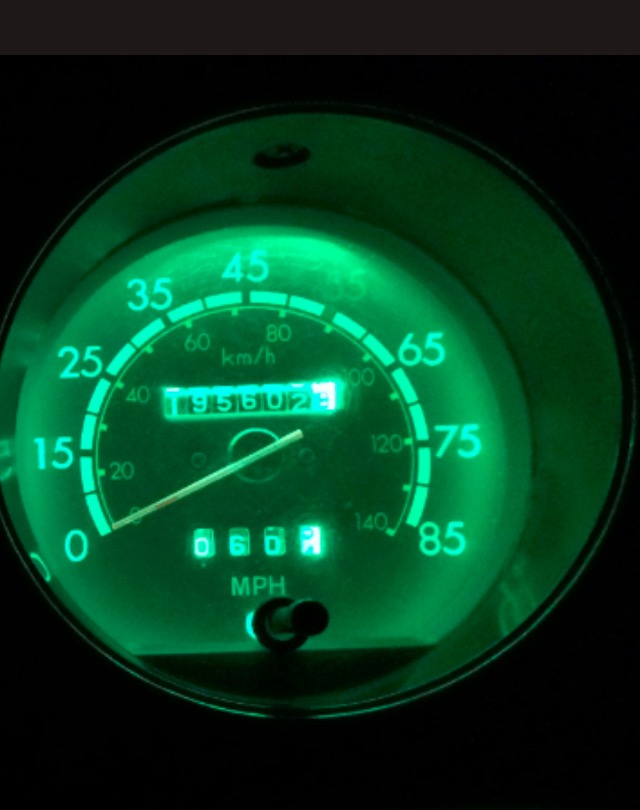 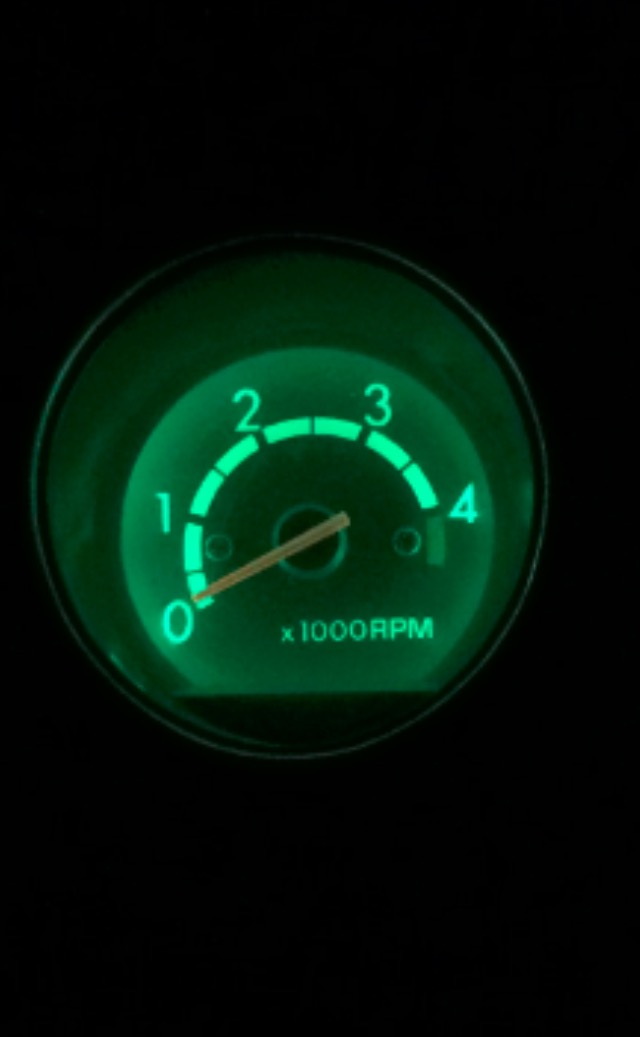 And just as an interesting tidbit of comparison, the new 200 series Land Cruiser gauges are all white light and white needles.
Shown below. 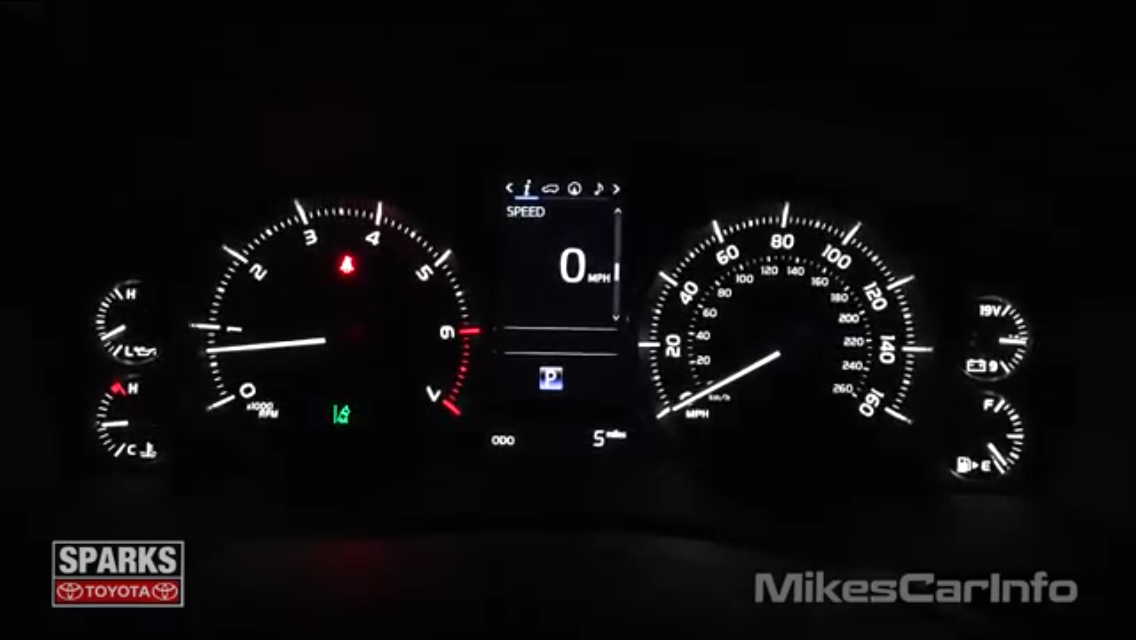 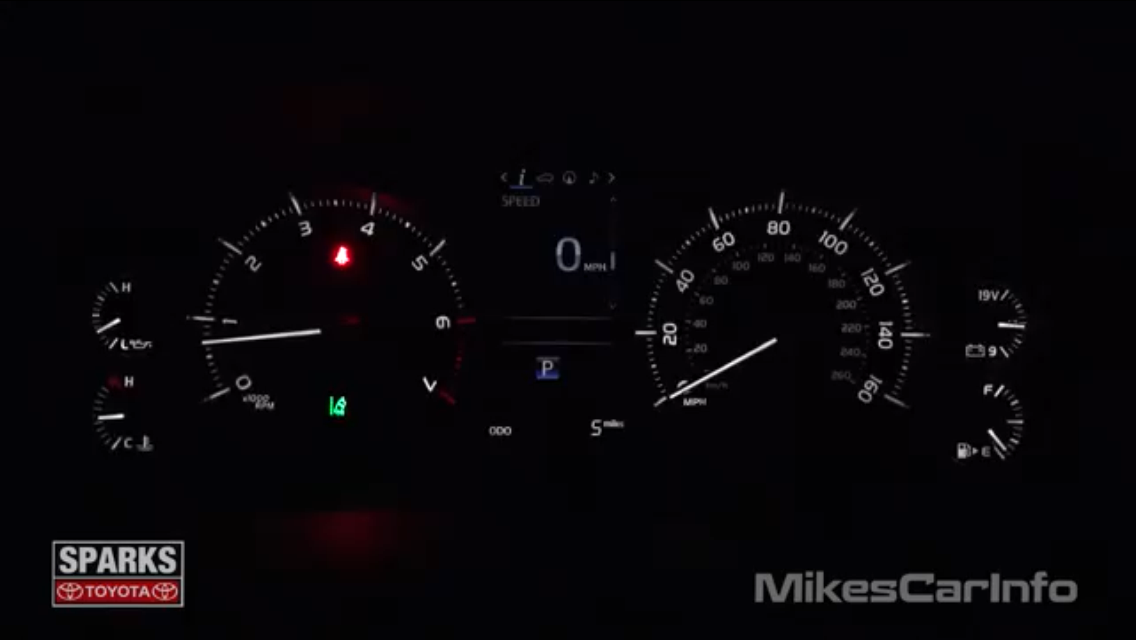 Thanks output shaft. I like your tach. I think that's the route I'll go with all the gauges.

So has anyone used the LED load equalizers for the turn signal bulbs on the four corners?

Cruiser Jimmy said:
So has anyone used the LED load equalizers for the turn signal bulbs on the four corners?
Click to expand...

Just bought mine today.... Should have this week!.. Will post install

I put LED lights in the rear tail light assy. Turns, backup and stop. The illumination is much better than the incandescent bulbs. However hyper flashing is present when using the LED turn lights. I ran a Sylvania load equalizer in parallel on both sides. It works as stated. You have to mount the equalizer to a metal surface to dissipate any heat buildup. It is stated several on the box and instructions and the reason is the unit could reach temperatures in excess of 200 degrees. As a test I ran the unit for a long duration and it only got hot enough to touch and keep my hands on it. I'm sure the audible blinking sound would start to annoy you first, say in a left turn lane at an intersection while there's an accident right in front of you and you're blocked it.

Since my last post, I switched out the type of bulb for the HVAC and added the expensive foil tape I already had from a home project (thanks to @srogers and @NookShneer for the idea) to reflect and dissipate the light. Then I took one of the extra green LEDs and wired it into the light for the stock radio (that I am using as a dummy radio with a real one in the Tuffy). Again I am very satisfied with the results. All of these these photos show the light on the highest rheostat setting, they could always be dimmed a bit to make the colors of the gauges and needles stand out more.

Pictures really don't do these mods justice, but here you go. It still seams too bright behind the re-circulation mode part in the picture, but it isn't that bright to the eye. I'm still toying with the idea of turning the LED around to point backward - at least the colors are the way they should be since it is a white bulb and not green. 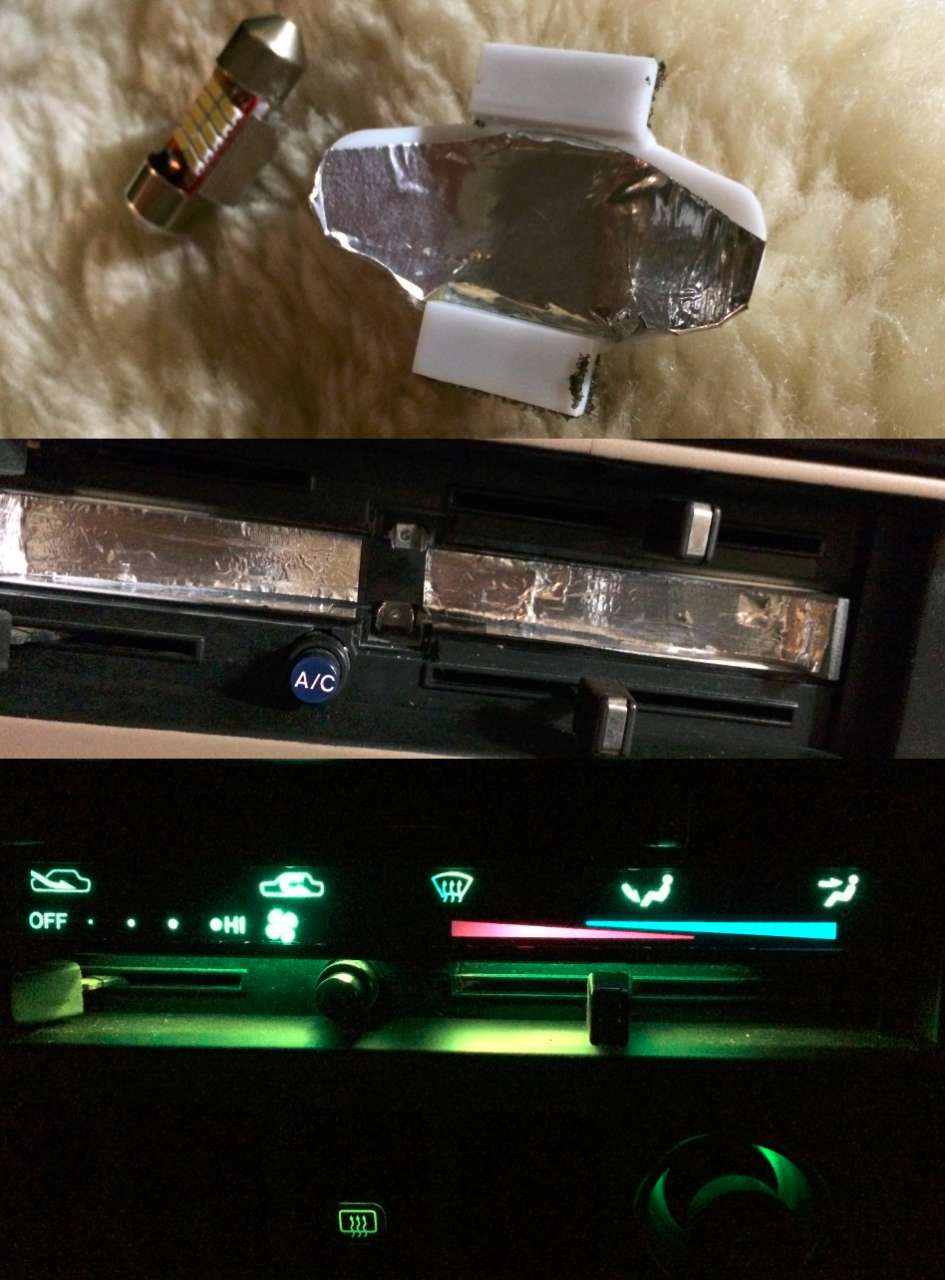 I opened up my factory stereo and tried to get the bulb out with no luck, I think it is hard wired in. So with needle nose pliers I crushed the bulb enough to pick away the glass and leave the wire. 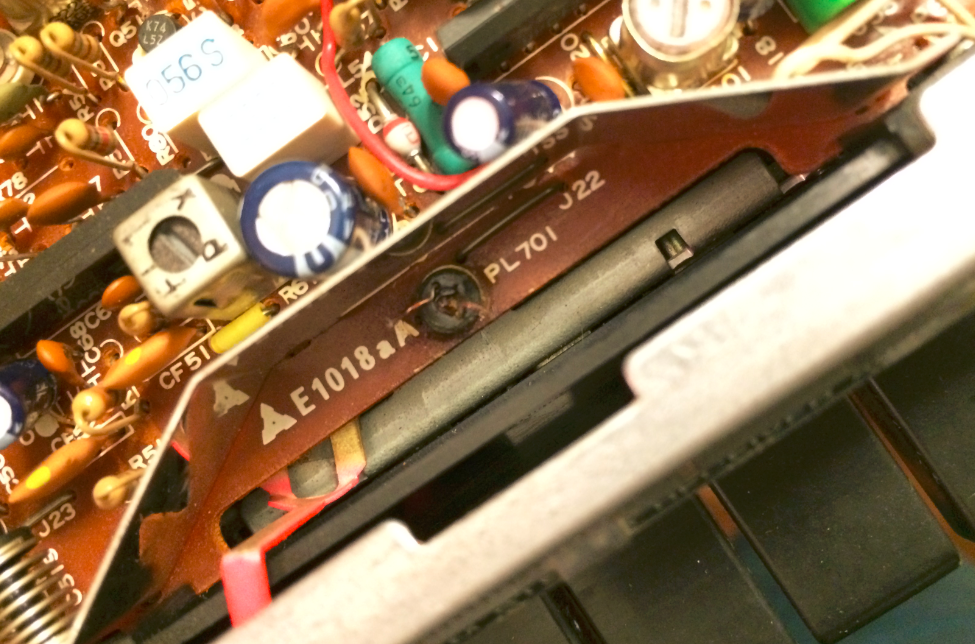 Then I soldered in an extra LED bulb that I bent the wires out on. This was not easy to solder and the bulb did not want to fit down behind the metal reflector. If you are going to do this don't try it with one this big, I just did because I had it extra. 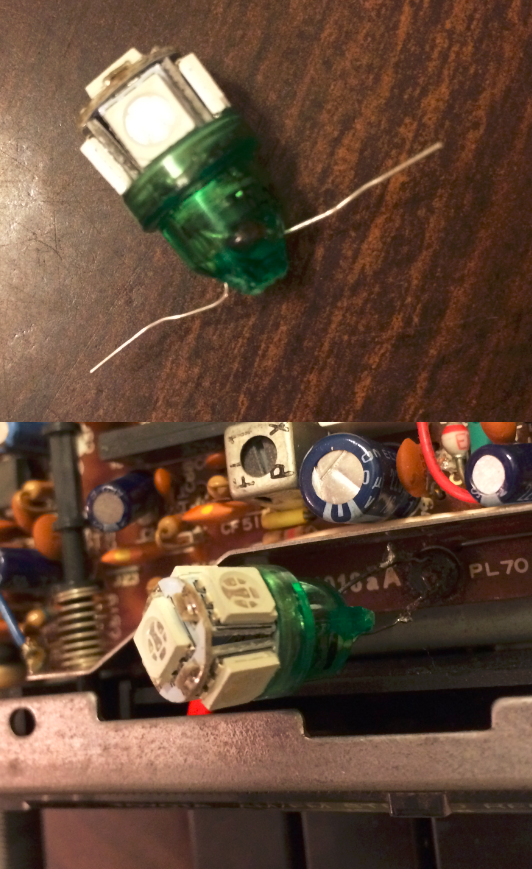 The stereo and clock come on with ignition, not the lights. 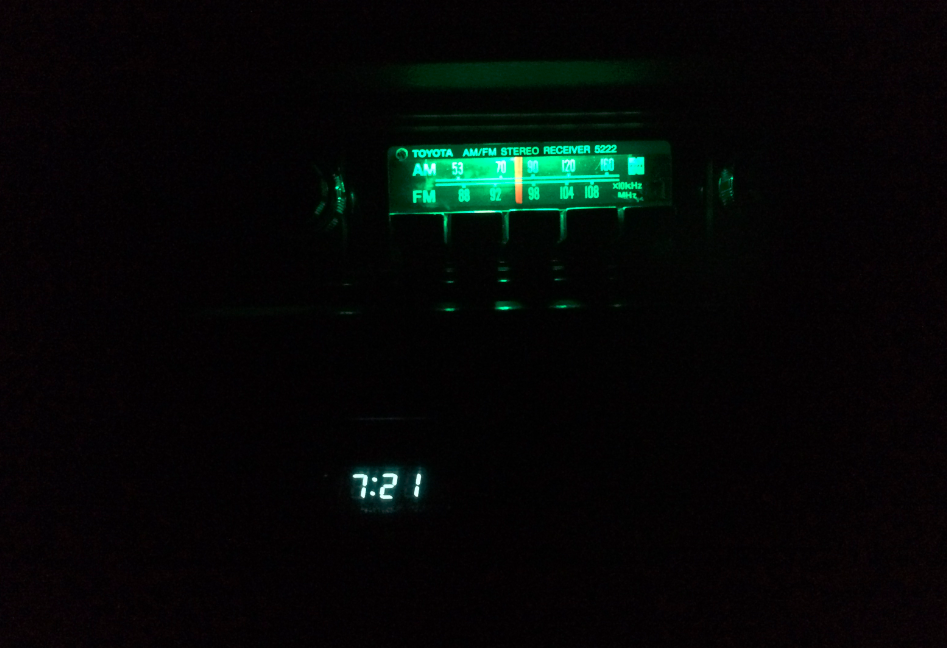 That looks great; sorry for my lack of pics, but I did what you are considering - I turned the festoon bulb LED around to point backwards, and with the foil tape it reflects very evenly down the entire heater controls slider.
You must log in or register to reply here.

4wd light came on while driving/grinding from transfer case