Is there a Bolt-On Off Road Y-Pipe available? (no cats) (1 Viewer)

Some years back, my OEM muffler rotted away and I replaced the entire system with a complete Bosal setup from the manifold back.....

A few weeks ago, I noticed the Y-Pipe seals were leaking, then one day she lost power temporarily on the highway.

Turns out the secondary cat melted, so I gutted it and re-installed everything with OEM seals

Got a nice little boost in power, but about a week later, I noticed the Y-Pipe seals had started leaking again


Put everything back together using new Bosal seals


Since then, she's been running with more power than ever and best of all, no MIL codes

I figured the clogged up cats were the cause of the Y-Pipe seals blowing out, but late last night I noticed it started leaking again and it progressively got louder

Anyhoo, my rig is registered in FL where there aren't any emissions, so I don't really need a cat, but I'd like to replace the Y-pipe with something that has a proper seal that won't start leaking after a couple of weeks

Does anyone make a Bolt-On Off Road Y-Pipe?

I know that you can get the Y-pipe OEM for about $350. AFAIC its not bolt on but rather weld on but I could be wrong.

Why not have a straight pipe welded in since emissions aren't a concern?

M32H32is said:
Why not have a straight pipe welded in since emissions aren't a concern?
Click to expand...

Both cats are already gutted, so it's already free flowing 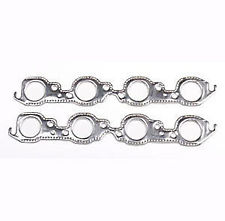 Mine leaks at those stupid donut gaskets as well.

M32H32is said:
Mine leaks at those stupid donut gaskets as well.
Click to expand...

What I don't like is that it's spitting hot exhaust right into the side of the engine block
You must log in or register to reply here.