OK, it's been a long, long road. I've endured ribbing from you my wonderful clubmates, which has only made the time fly faster (ahem) but, I'd rather it be done well than half-assed, and thankfully my patience is paying off. I was at Redline earlier this month and the final tasks are being done now in July. First a few teaser pics:

Width: it's big. the track (outside width of stock axles/tires) is the same as the donor 80, but the 80 has fender flares with the actual body narrower than the flares; but here think of the body's "box" being as wide as the fender flares' width: (note the split bench in second row to fit 5, vs. his usual dual buckets to fit only 4, this was a custom change, wrapping an early 80 series bench with the same material as the fronts; the front seats are Corbeau with seat heaters and lumbar bladders): 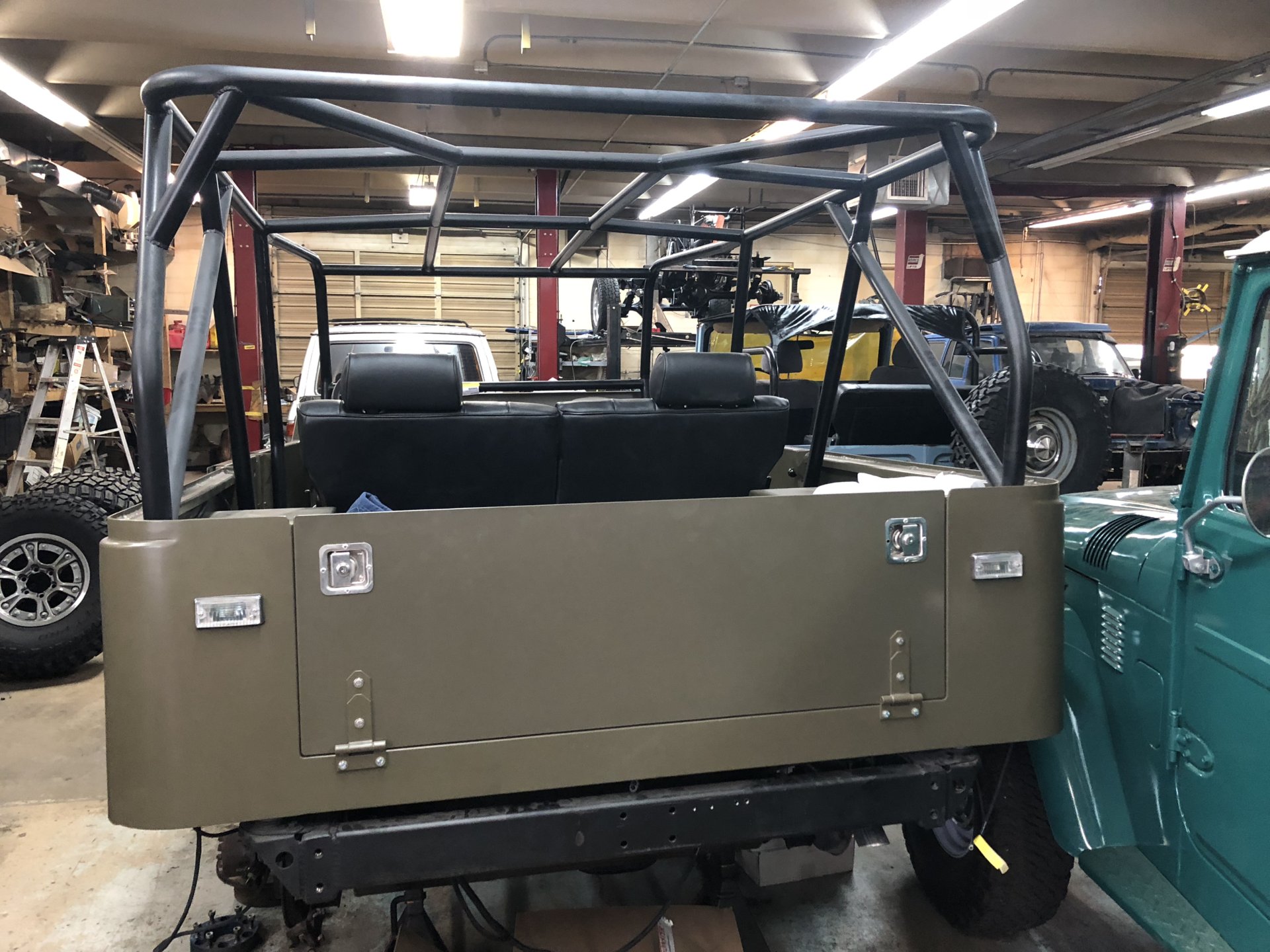 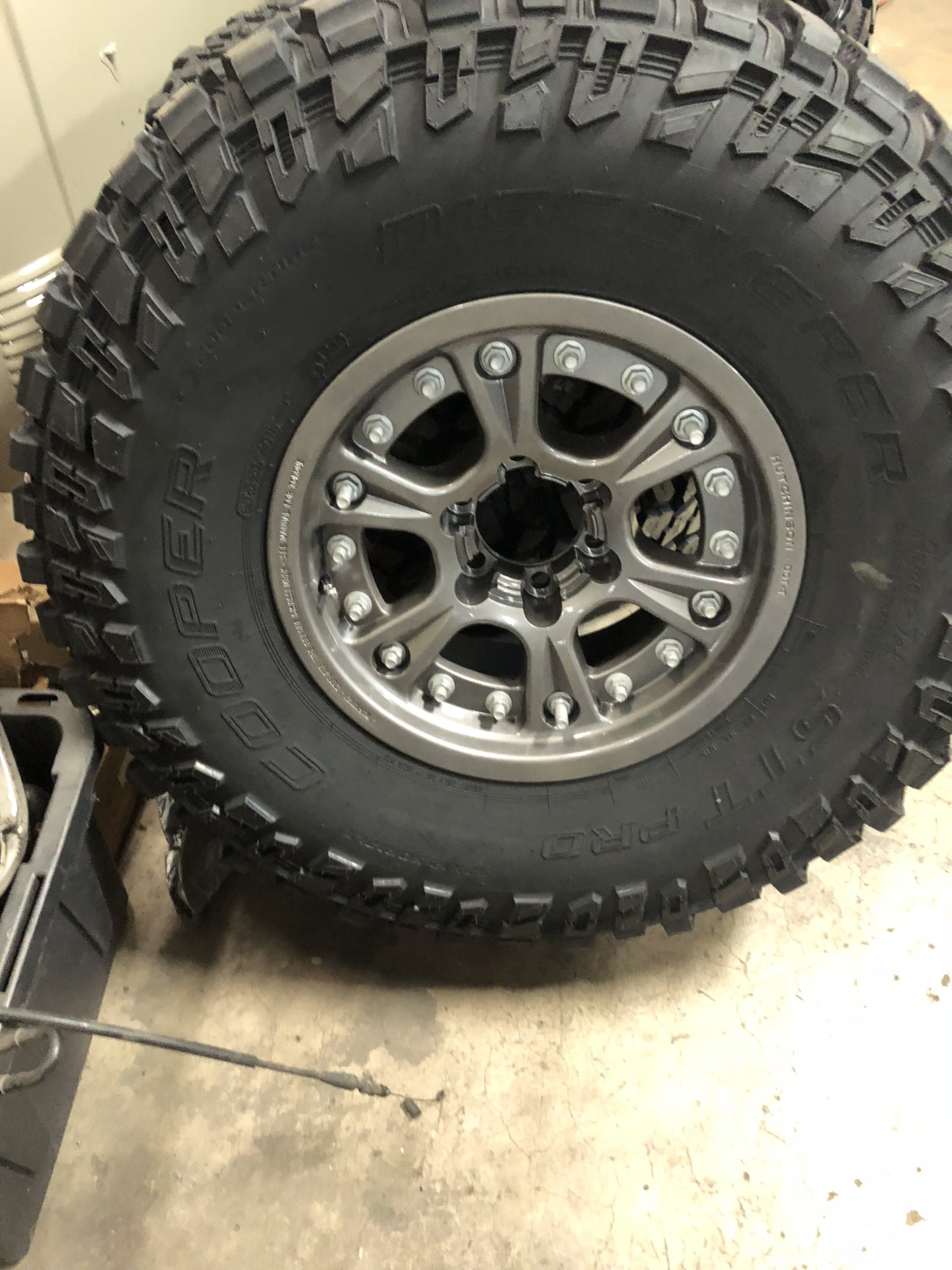 Theme/Period: it's modeled after an early (1958-1973) generation Series 40, with the 'tuna can' front lights... (even the rear 4x4 labs/Redline custom bumper with hitch and dual swing-outs keeps the round lights. more on that later): 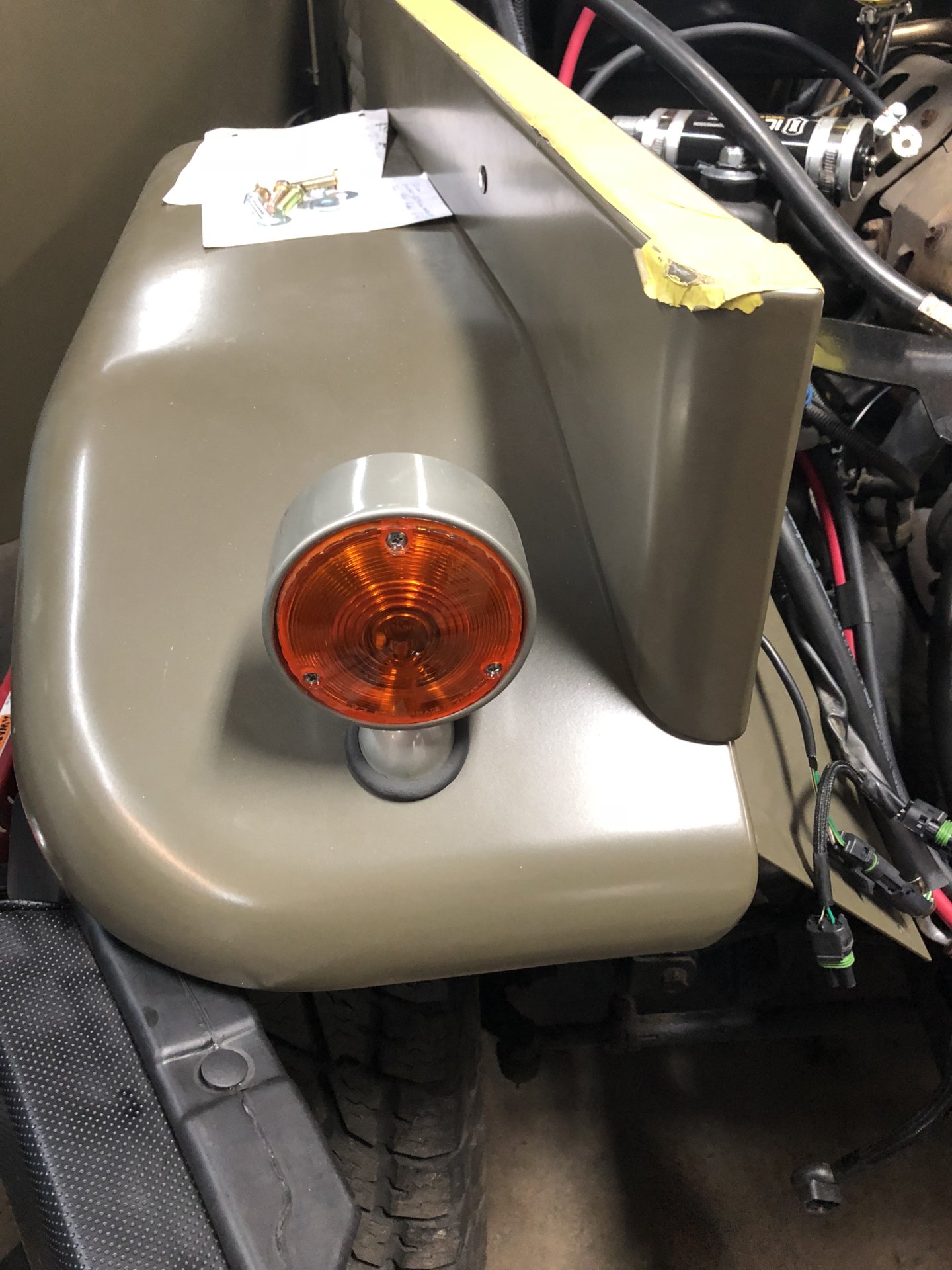 Body: the front doors are the same size/shape as a stock 40, so a skeleton door for a 40 will fit. The rear doors are 'new' in that the true 40 never had 4 doors. But like a "real 40" this body 'angles in' at the B-pillar as you approach the front, so Redline took off my IPOR sliders, recycled them to a client, and built me body-angle-matching sliders (not my wheels): 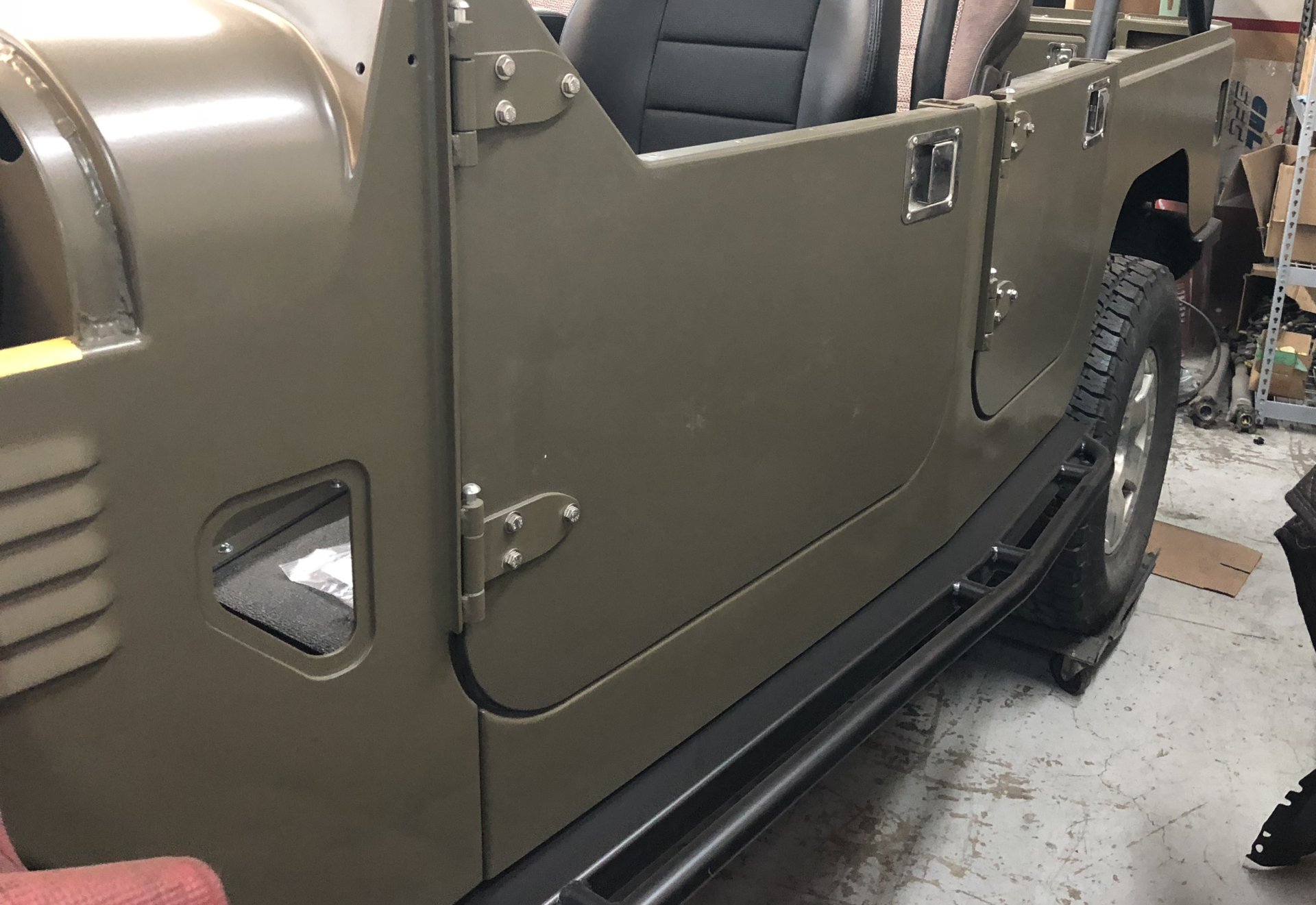 Suspension: new 'slinky' springs from down-under imprted via Redline. The challenge with the FJ-UTE (more on the name below) is that it is 1100 pound ligher than the 80 when you remove the steel body and replace it with the aluminum body and softop+rollcage. The stock springs and the J/heavies are both way too stiff. These "Slinkies" were the springs Justin found best. Paired with Icon external reservoir shocks and it's very sweet (I drove an 80 in Colorado for a week with this spring/shock combo and it was awesome, adjustable dampening was dialed and rebuild kits for life means hopefully the last set of shocks i'll need):

So, onto the name. Justin came up with the FJ-UTE name as a play on "utility" and the Ute pass/natives from Colorado. But for someone not from CO it just conjurers up a pickup-truck from Aussie land. This vehicle will qualify for antique plates come Jan 1, 2019 at which point a vanity/custom Antique plate will be ordered. but "FJ-UTE" is not what i want on the plate. 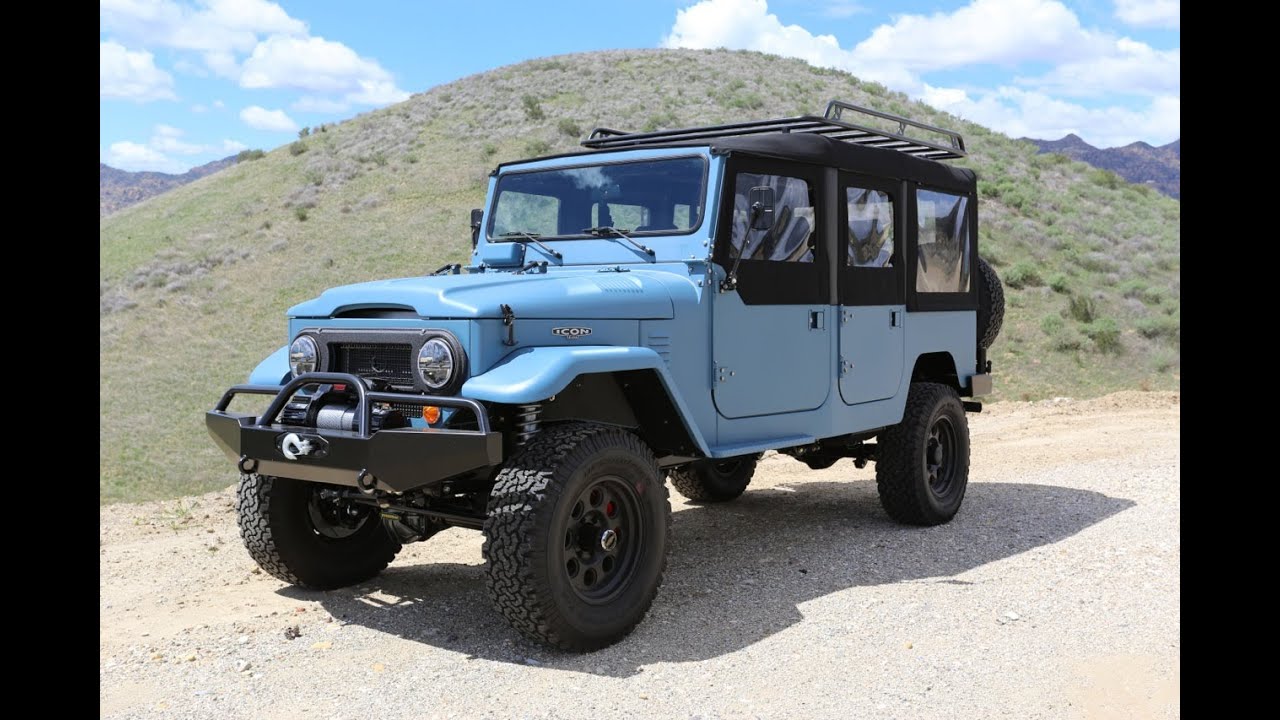 As of now I'm still running a 1FZ and it is all Toyota OEM parts (save Icon, slinky, etc) but all engine and brakes etc. So I'm not bashful about mounting the new old stock OEM rear passenger corner badges which thanks to Ebay are already in hand (not my pic): 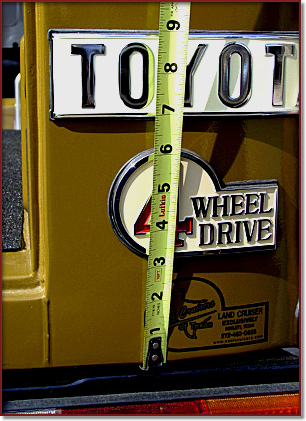 I even got a new pair these, too: 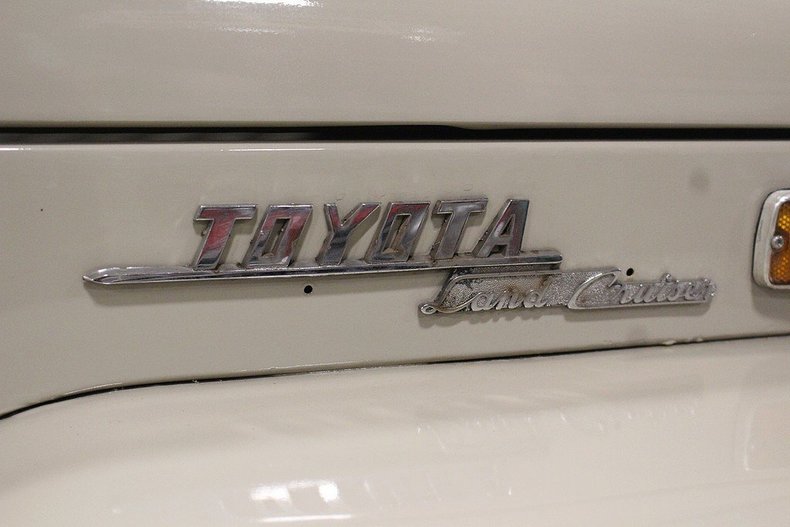 SO, what should this thing be called? FJ-48? FJ-84? If you come up with the name that ends up on the plates, there will be a prize of some sort. (No not borrowing the truck for a week, but a case of beer, that type of scale and bragging rights, of course)

here's the rear bumper, older pic, it's actually a dual swingout with the right side being dual jerry can holder.

the key here is the round taillights and the 'under brows' meant to protect the light lenses from drop offs and general bumpage: 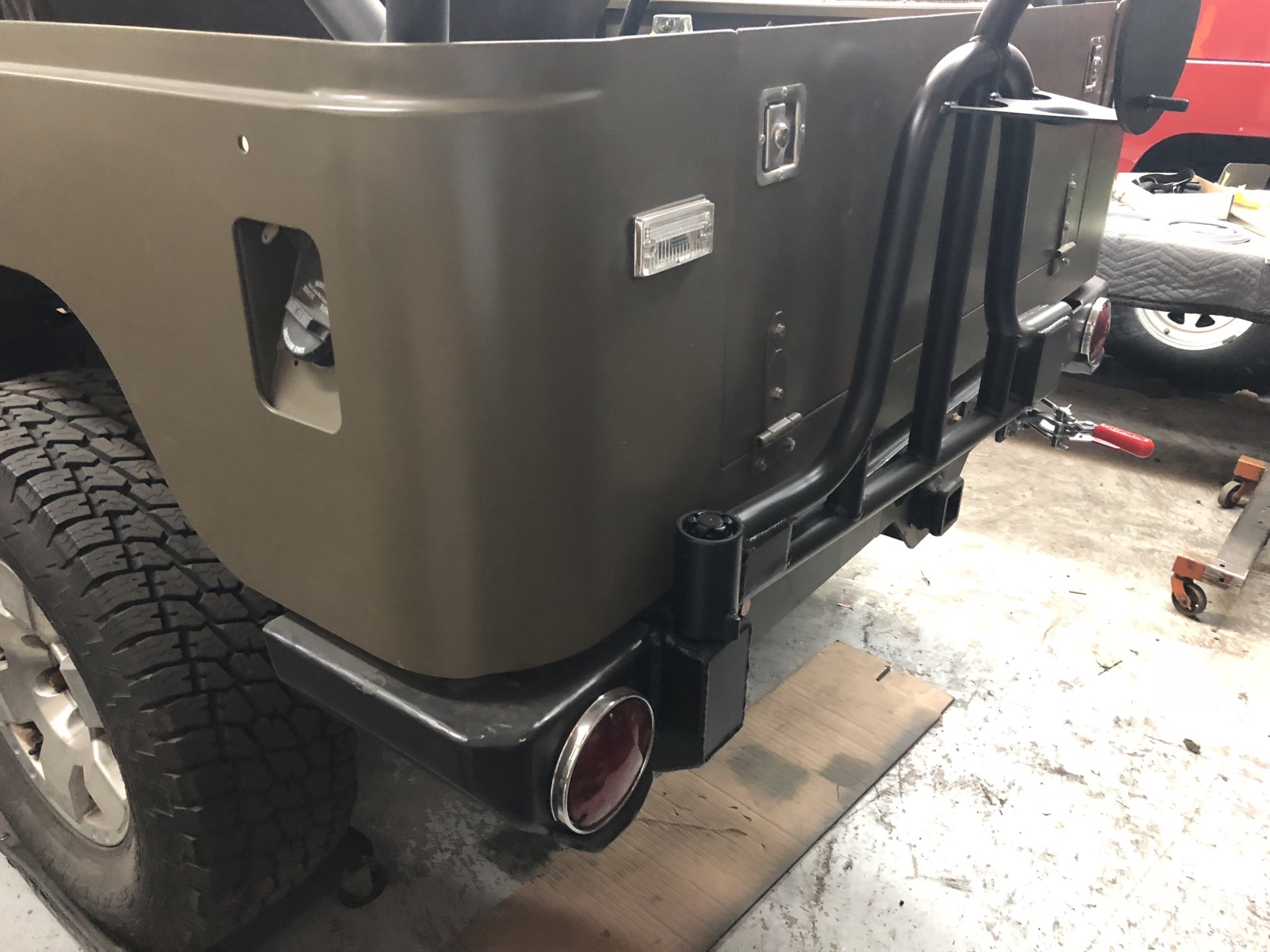 right now the external reservoirs are inboard and higher than on the shocks themsleves:

plenty of loom on the stuff inside the metal dash (same powdercoat as tub/body). 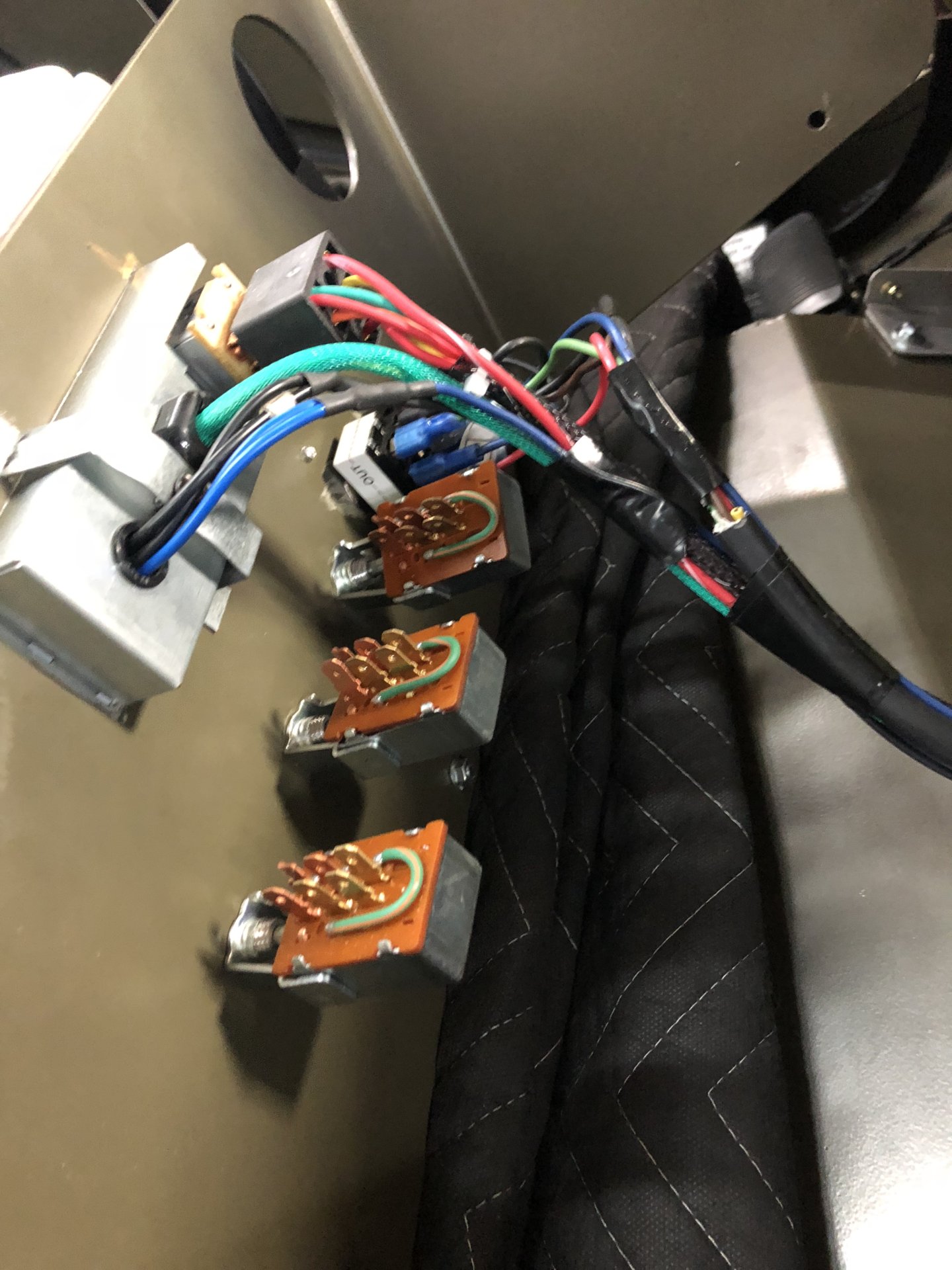 He put in my "12V guy" aircraft style winch controller and 2 machined alumnium 'aux' matching switches are available for my DIY front aux and rear floods (led lights awaiting in VA). More to follow on the interior, but current plans:

1) bed liner (monstalina) the underside to protect the softer alum tub from rocks/gravel
2) line (monstalina?) the inside of the tub, right now the powdercoat interior is pristine but it'll be slick when yet/muddy and won't wear well. So unsure if custom diy carpets or not-too-abrasive monstalina of a UV resistant color/blend is my plan. Any ideas on how you'd 'line' the inside of an soft top truck?
3) drawers - being a softtop need to put my tools somewhere safe, i did get a few more latches so my main keys will work on all. Instead of full width drawers, maybe fridge on left (I am getting 30A rated 12v outlets in both rear corners) and drawers to the right, 33/66% type setup, we'll see.
4) a box/shim under the drawers: since the tailgate hinge is 1.5" higher than the bed, this would be for special type of storage TBD (ie: electronics) that would raise my drawers up to clear the tailgate, maybe a bed-width short water storage, maybe an empty box, not sure yet - but something needs to raise the drawers up so the face clears the tailgate hinge to pull them out the back.
5) stereo: the front tuffy box has a single-din radio chassis slot, so need to decide is that for the ham, and i do a micro preamp/processor for xm and ios input only? tbd . I did pick up a few dozen close-out 2" drivers and plan on building ustom fiberglass molded line arrays up the A and D pillars for sound, with mid/bass modules under the seats
6) CB/ham via remote-face-plate setups up in roll cage above head? (hiding the main body of each in dash or under seats) TBD
7) long term project: a hard top, diy with 40 series rear glass and stitch and glue okuma ply and fiber sandwich shell, the roll cage will serve as securing points all around, should be interesting.

here is a much older pick of the engine post moving it aft - recall the driveline was moved 6" to the rear (center) of the chassis. This results in:

a) the original 80 frame rails now stick out of the front of the truck facia, like a 40, to mimic the look and bumper mounting points of the older style truck
b) results in a great center of gravity for the truck, effectively mid-engine as the center of engine is now behind the front axle. i drove the first UTE at an offoard park in CS and the weight shift combined with the > 1000 pound weight loss made this big bus handle like a champ... when the body was off, Redline scrubbed and anti-rust pained the frame and the axles. 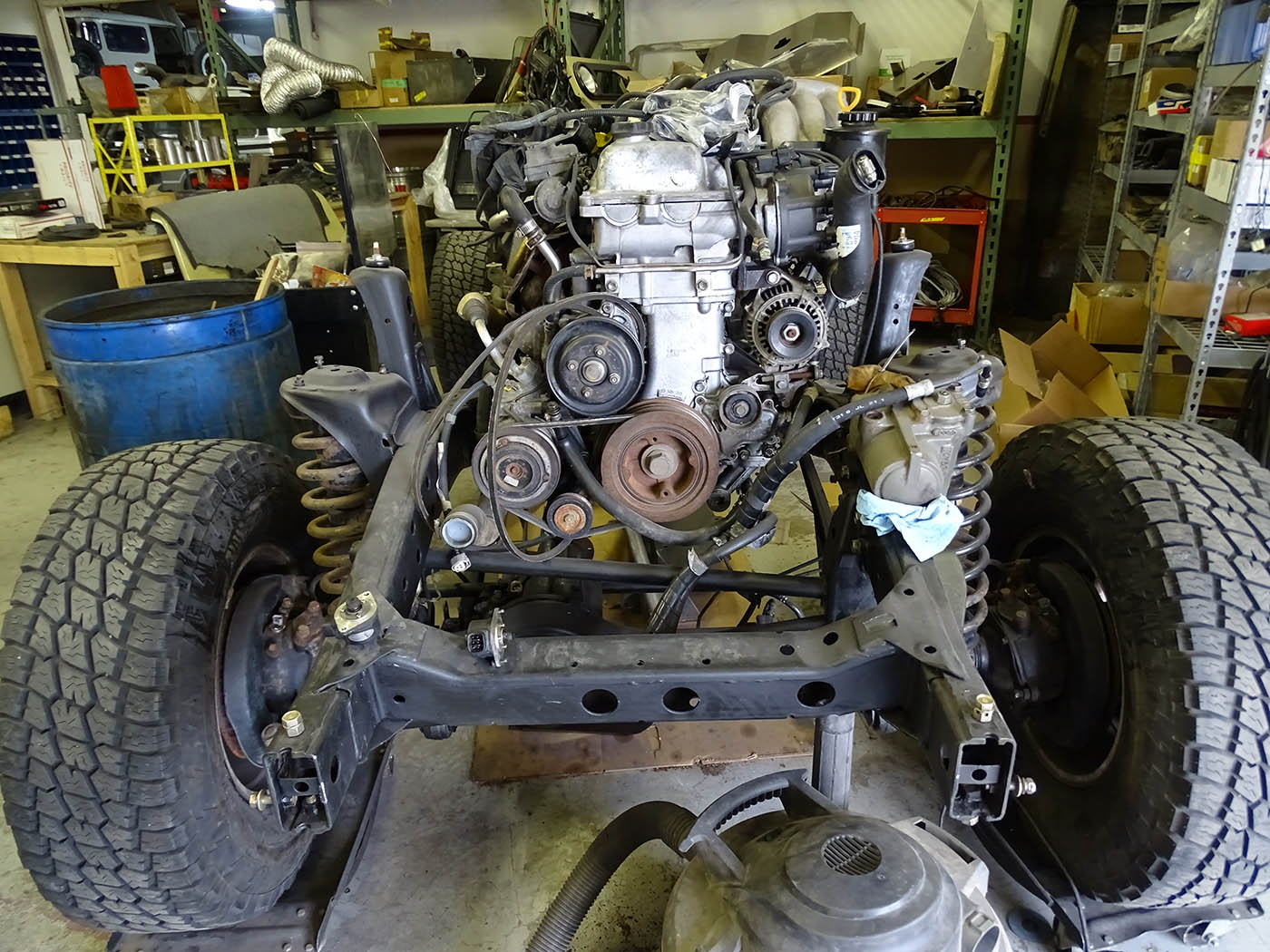 Just call it what it is, F.ing awesome.

For the interior, I think bed liner would not be pleasant to see or touch, and would detract from the awesomeness. What about an epoxy paint with some grit incorporated? I'm thinking here about how garage floor paint can have some grit (fine sand?) applied to make it non-slip. I think in that case the grit is applied right after painting. I would be surprised if some company hasn't already developed a product like this.

I think you are right to want to give the nod to its FJ80 origins as well as the FJ40 that inspired it.

You should name it this... 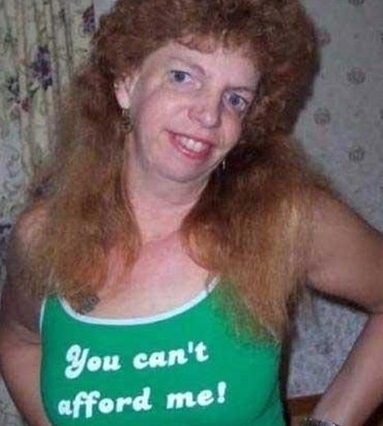 Can't wait to see it thrash around Rausch Creek.

It checks all the boxes!

NoVaSteve said:
Just call it what it is, F.ing awesome.
Click to expand...

^^ not sure it fits on the plates, but cheeky/funny

DirtNap said:
On the name, I liked FJ-Ute at first, but I think you are right about something different. I suggest "FJ-840" (my current favorite) or "FJ-8040".

I think you are right to want to give the nod to its FJ80 origins as well as the FJ40 that inspired it.
Click to expand...

Sam, i finally cracked open that Sam New World bottle you got my months ago. Man, it was strong, the 10% ABV kept it from spoiling i think

Crusha said:
You should name it this...

Maybe she's special under the hood? 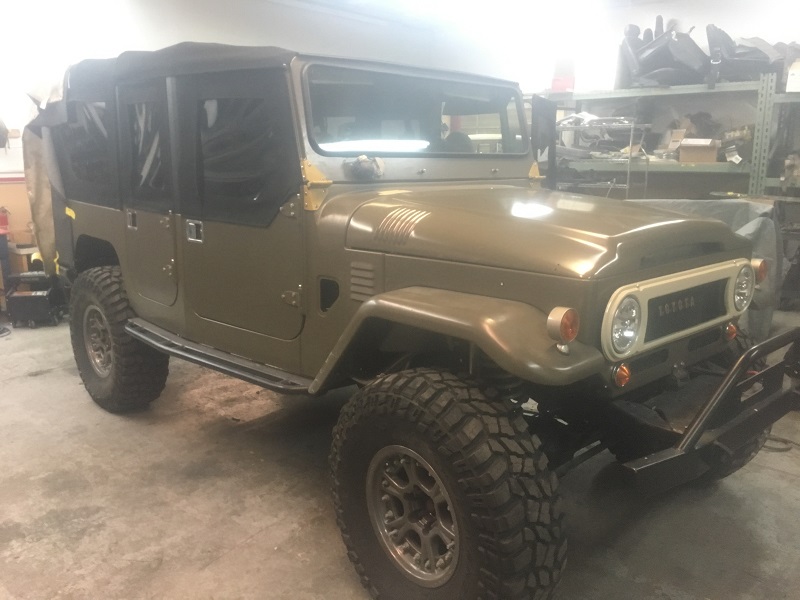 bumper almost done... and "no kids, the windows don't roll down" 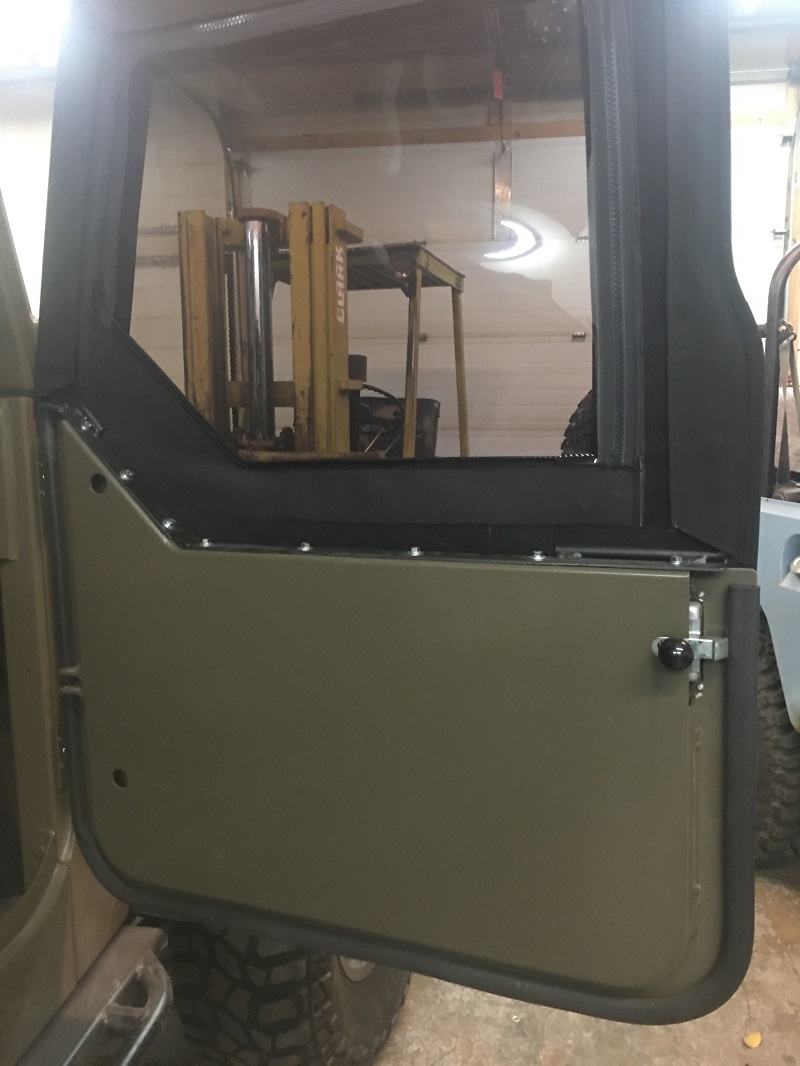 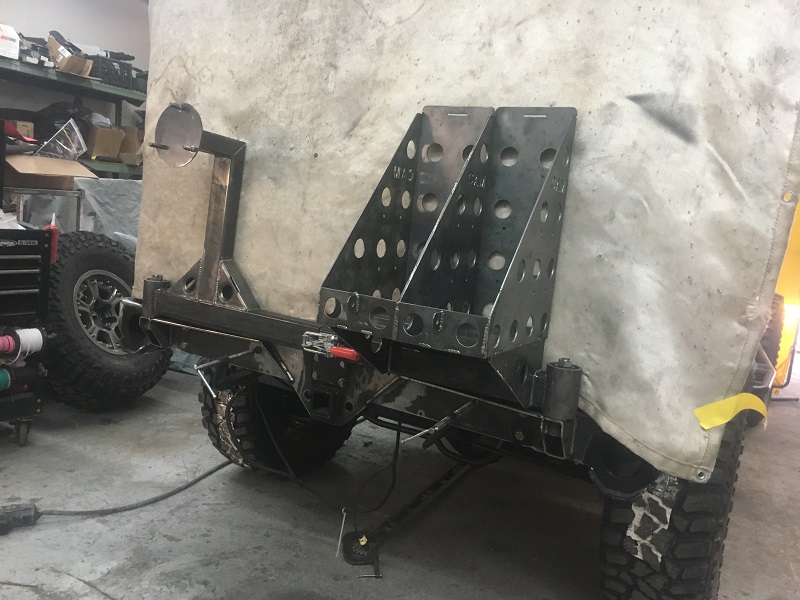 Free to a good home