F Motor is a Better Oiler

Not interested in zinc, but, it is a good angle to consider, just not my approach. Also, I'm sticking with a gasoline engine oil, as it is engineered for modern fuel.

Here is the diagram, and a realistic scaled-drawing of the head and block, of the early F filtering in action. It pumps oil directly to the engine parts, after it controls the pressure at the location where it bifurcates: 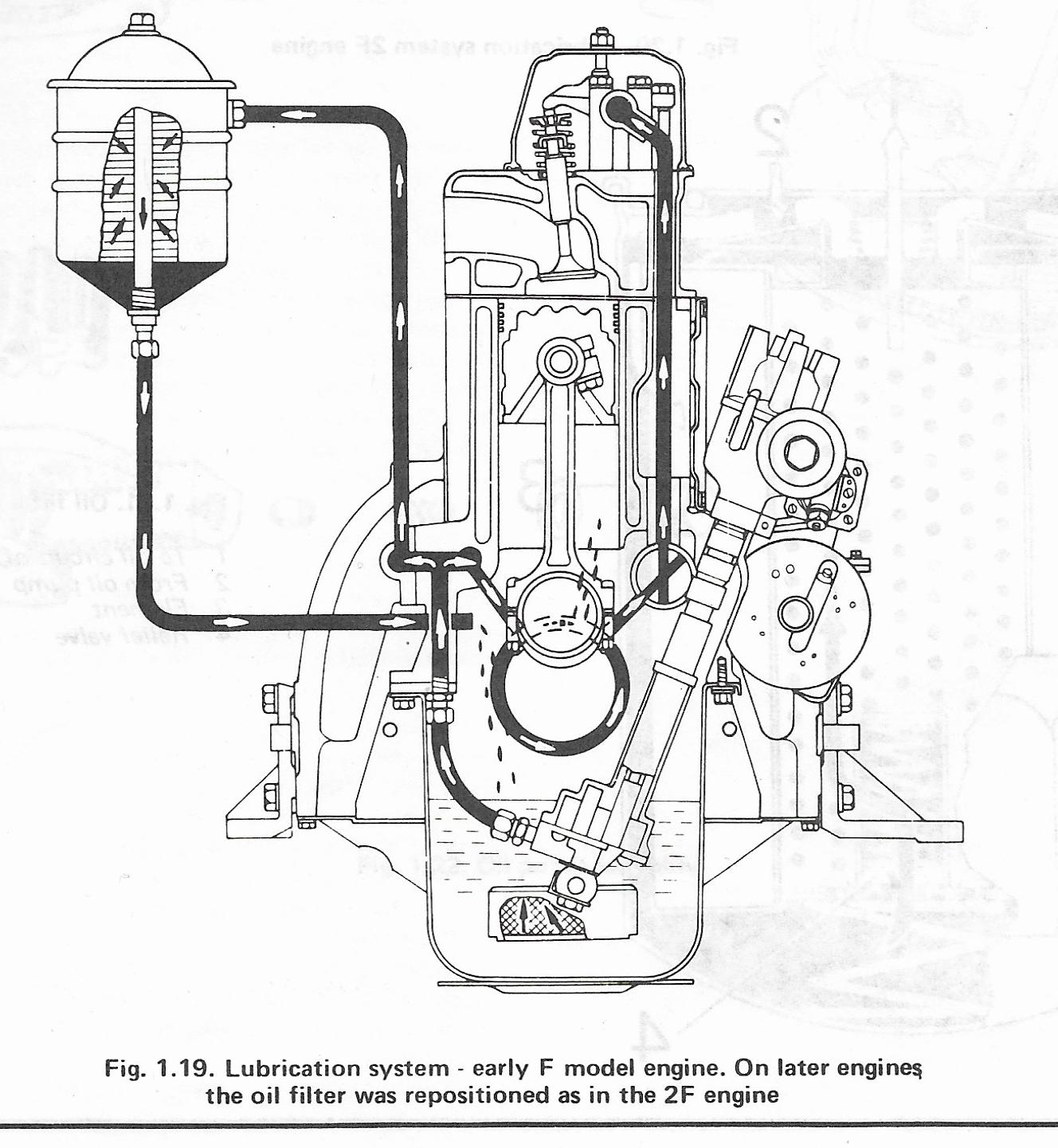 And, specs if you are checking the F's regulator:

On the 2F, the pressure is measured after the screw-on-type disposable canister-filter. 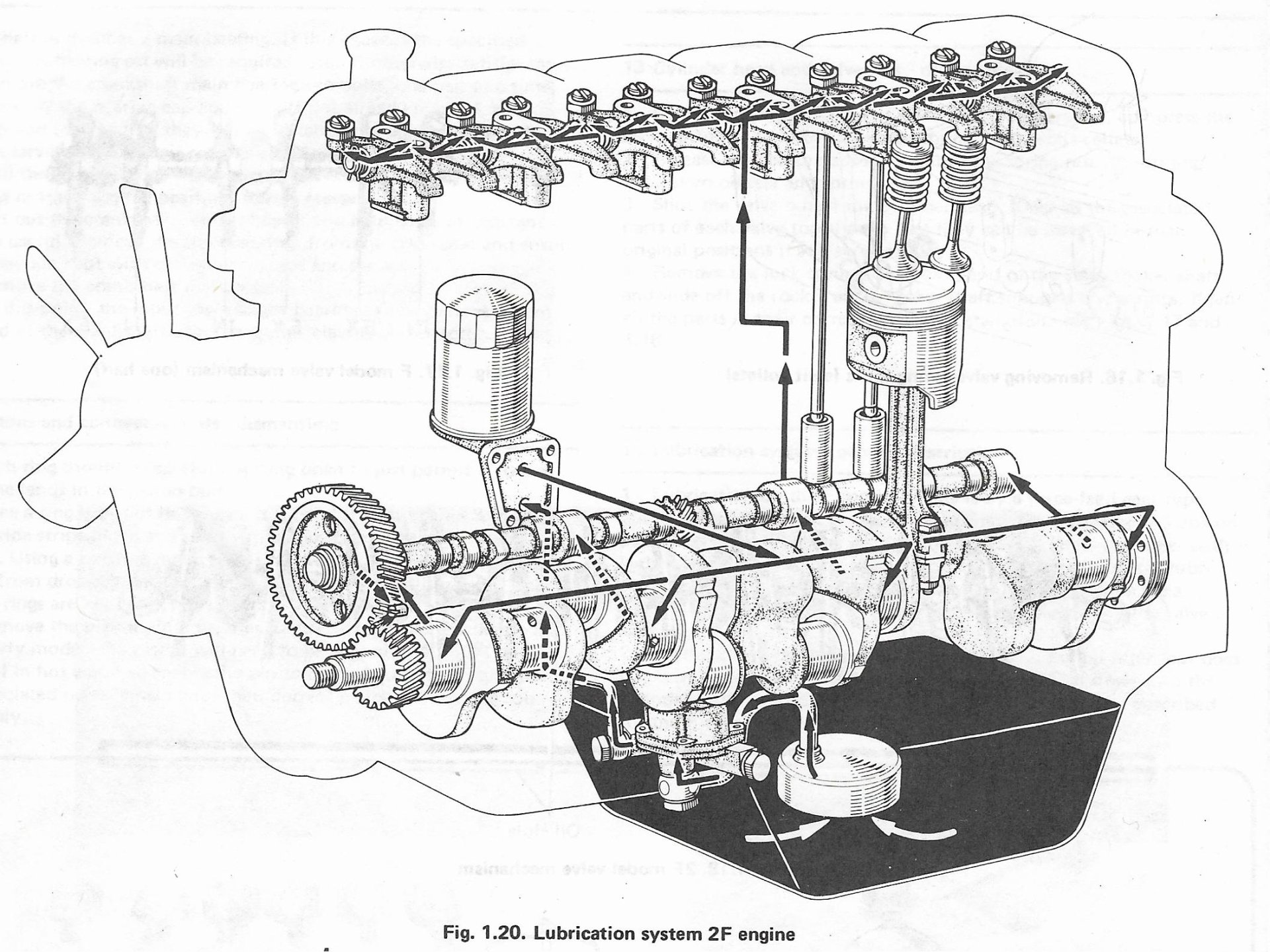 Missing from these drawings is the location of the electric oil pressure sending unit. In the 2F, it is on the driver's side, so it would be reasonable that it is measuring post-filtering. With the F, I'd guess that it is checking available engine lubrication pressure and not the pressure to do the filtering? Both are read with the gauge on the dash.
Last edited: Nov 11, 2022

Where did you get that top picture? Do you have a copy of the Toyota F-Engine Repair Manual? If not here’s two pics of the applicable section on F-engine lubrication. There’s three bifurcations, and oil pressure above 42 psi sends oil back to the pan. You can see why I asked where your pic came from. HTH. 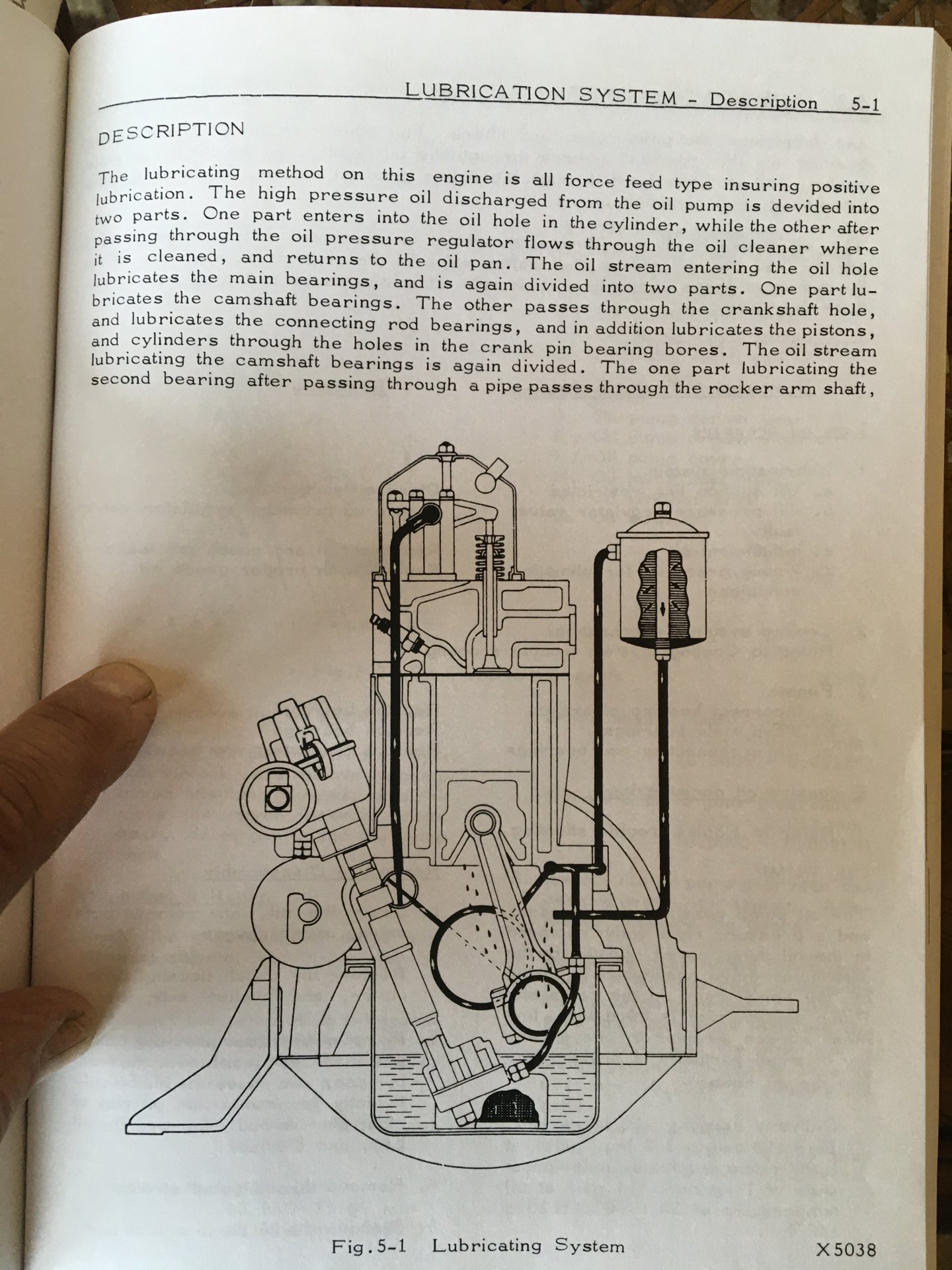 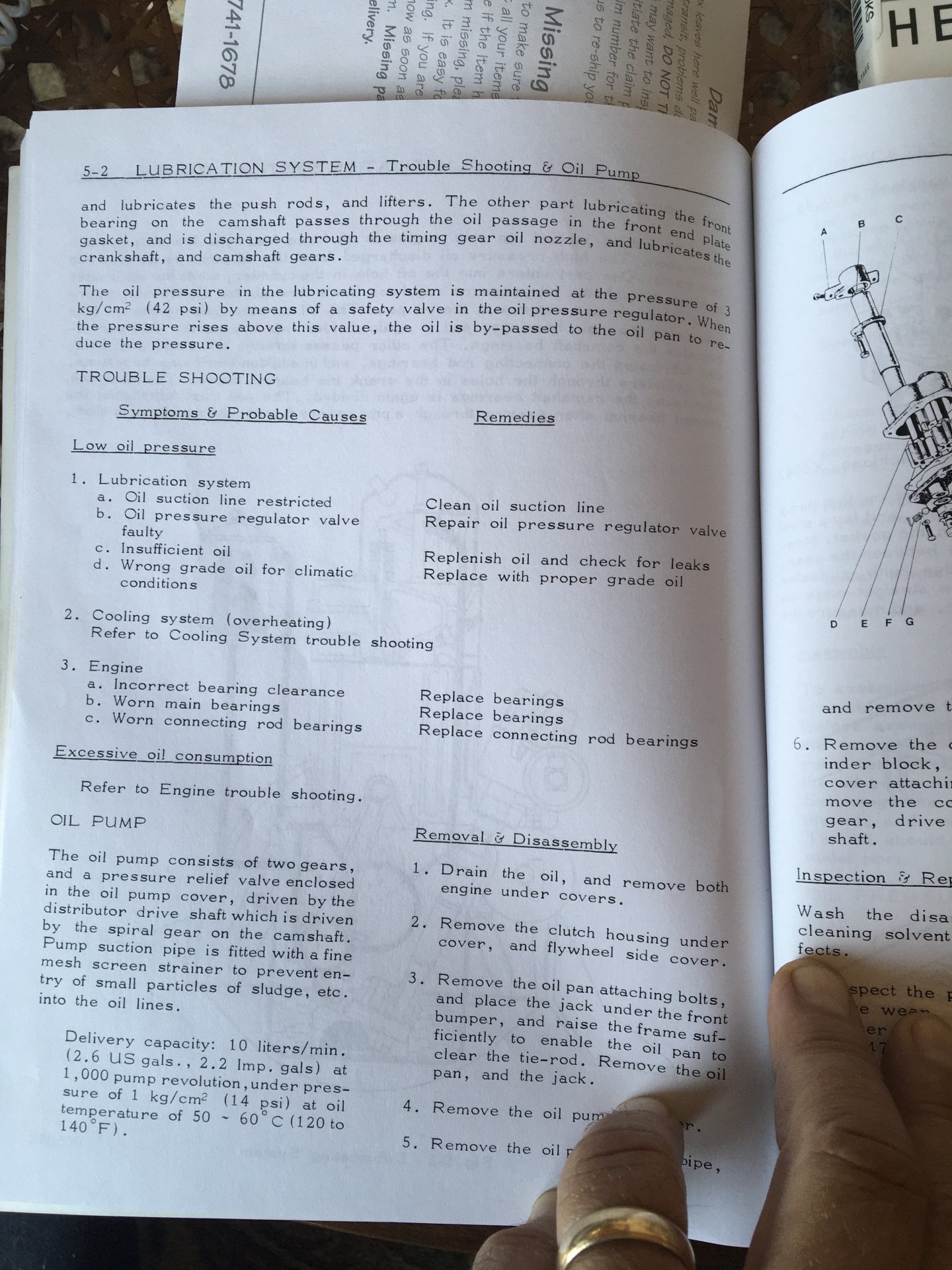 There is only one split/branch on the F oiling path (unless you are thinking about the oil filter). Do I interpret the drawing wrong? They draw it like that but the return line doesn't intersect with it. It is from the Hayne's manual.

Thanks for uploading the FSM. I see two branches, one for lubrication, one for filter element (F engine) 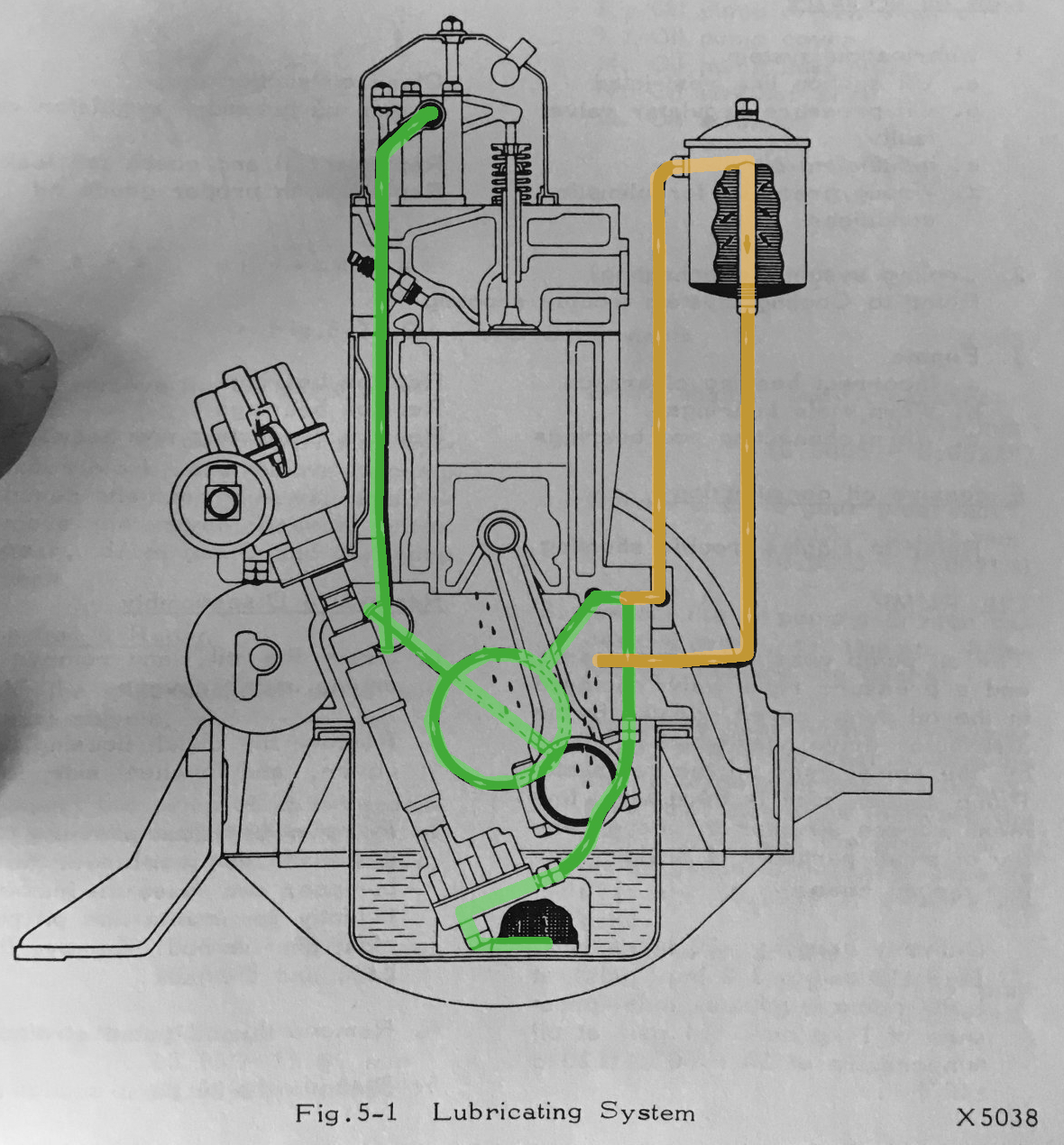 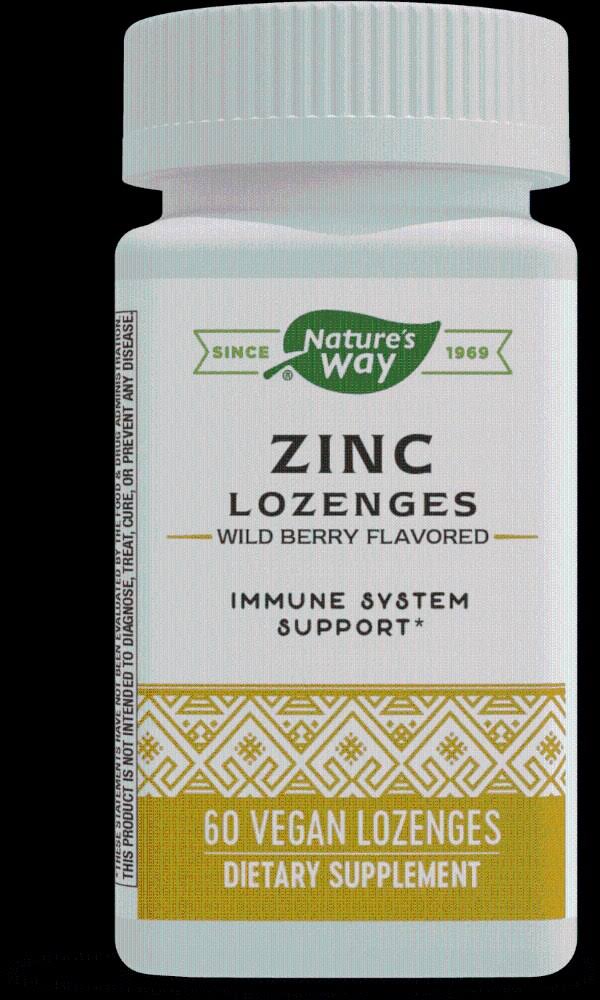 Pitter Patter said:
If you’re trying to increase oil pressure then run 20-50 , if you’re trying to improve lubrication for a flat tappet engine then use a zinc additive. Zinc is natures way to smooth operationView attachment 3165635
Click to expand...


Yes, all of that is good. I'm just neutral to using zinc. Kinda pricey, I'd be using a mail-order oil or an additive, and I would rather spend the money on more frequent fresh oil for the crankcase.

I've never heard of problems, by not using zinc. I've seen the wear upon breakdown, but it was the rings or bearings that called for the teardown/ maintenance.

For years, I thought that viscosity breakdown and contaminate was the reason for engine wear. I never considered that it could be so cold that the oil's viscosity would allow the cam and rocker to potentially be dry for short periods, and that the oil filter choice might contribute to it. In such situations where screw-on oil filters are in by-pass (high rpm or racing applications-type-filters (FRAM), or really cold oil), the oil is delivered partly unfiltered.

The four Cruiser motors that I've had or have in my possession are all heat sinks, F and 2F. I love having an aluminum head engine because you can make use of heat and get the window defrosted before you loose interest in leaving the house in the morning. But, in a Cruiser, although those parts are going to keep the mice on the manifold warm at night, they eventually go ice cold by the time I fire it up the next morning. They remain cold until you make the fuel needle move just slightly to the left.

You are doing it wrong if you are relying on a 50yr old Toyota guage/sender to split this close of hairs. You are looking at these notoriously inaccurate gauges and saying a sliver more of black proves this theory.


Get an a analog pressure guage and track the differences and then you can verify how much psi difference there is.

As long as you psi is in spec, I’d be more concerned about the filtering and anti-drainback features.


It’s well known different filters can cause different pressure based on all sorts of specs. Toyota states a minimum/maximum range that the oil pressure should be at.
I would say by far the vast majority of land cruisers from the fj25 til the 90s were run with whatever part store oil/filter combo they could find. Sure some went Toyota at dealer, but shockingly they all seemed to survive just fine in all temps for the last how ever many decades.
1988 BJ74 build thread.

It seems even Toyota realizes its gauges and senders are less than accurate. They use a scale that creates a gray operating range. There's nothing definitive here. Any oil is better than no oil.

The needle is either too close to tell, more pressure, or less pressure. This is how I interpret it.

My oil pressure is clearly higher in the summer, the needle is at the third mark. Now it leans to the right of vertical, when hot. Before (Denso filter) it was about as parallel as the vertical lines that make the letters "i" and "L." Instead of saying too close to tell, I keep hearing that the gauge needle isn't precise at the level that we perceive it.

But, the same points alternator/ammeter is supposed to work with EFI installations when the other points from the turn-signal make the ammeter and voltage jump all over the place, and you got thousands of dollars invested in measuring microvolts off a partly fouled, improperly insulated (thermally) O2 sensor? You can turn on the headlights on and get a different O2 reading because the system has no constant voltage - it was never designed for it. That "works" on the internet, but, the factory oil pressure needle leaves me misguided? It is certainly repeatable as far as results go. I tried a third filter, but, I decided it was about the same as the Delco, so, at least I can work from that data. I'd hope that someone would chime in about where they see the needle (maybe there is a cluster out there that didn't get rained on). I know that some people are installing new OEM oil pressure sender units - maybe it is just for looks? I'd imagine that the biggest inaccuracy is that the oil pump itself delivers nothing like a constant pressure, but, still the oil needle doen't jump around.

Thanks for everyone's input / responses.

I’ve always been confused about how the F’s oil regulator is plumbed. I thought I was getting clear here on this thread, but then I just now I came across this conflicting description and diagram, on RedLine’s webpage “HERE” . So, which is correct?

From Redline's page (link above) 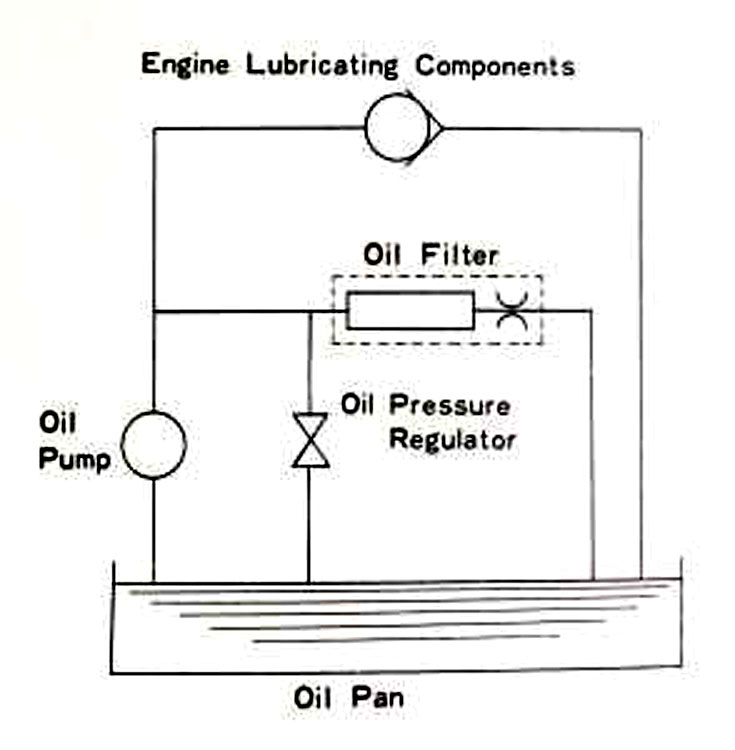 74 FJ40 confined to the swamp. Homemade body parts replace the originals as they rot away but it's a 40 on the inside.
83 FJ60 destined to face the same fate.

So, the F is described in this video

I don't know which branch is the overflow branch on the pressure regulator? My guess is that the pressure is maintained in the lubrication circuit. A radiant-heated oil filter can (exhaust manifold) would make the coffee percolation even more perfect (more filtering in cold weather)?

The Redline diagram makes it look like extra pressure gets dumped in the pan if it can't filter or lube? The pressure regulator keeps the oil pump from breaking, and the pressure on the lubrication circuits. 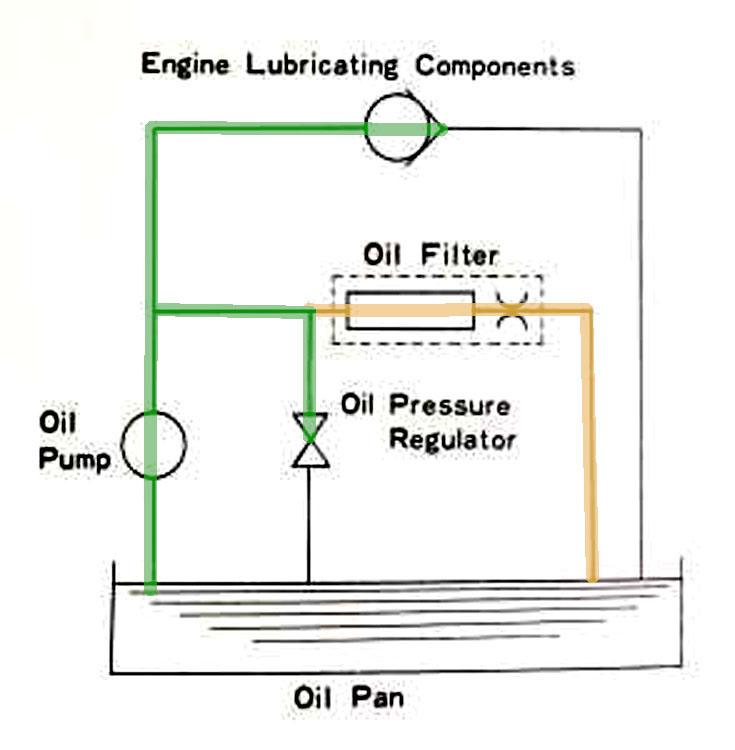 Grayscale said:
The Redline diagram makes it look like extra pressure gets dumped in the pan if it can't filter
Click to expand...

My take on Redline’s diagram & description is, that the ratio of oil to the filter vs oil direct to the engine is not adjustable. It may alter a bit only by engine clearances vs filter efficiency. And the regulator is more like a relief valve that only comes into play when the pressure exceeds the pre-set pressure (50psi) and relieves it directly back to the oil pan.

This makes the best sense to me, but I could be wrong. So as of now, I’m thinking the F manual is incorrect.
74 FJ40 confined to the swamp. Homemade body parts replace the originals as they rot away but it's a 40 on the inside.
83 FJ60 destined to face the same fate.

This is my understanding:
The bifurcation of the F's oil pump discharge of high pressure oil is as follows: "One part enters into the oil hole in the cylinder (there is a small cylinder bored out of a lower part of the block - my subjective take), while the other, after passing through the oil pressure regulator (comma needed) flows through the oil cleaner where it is cleaned, and returns to the oil pan."

Here’s the confliction as I see it. 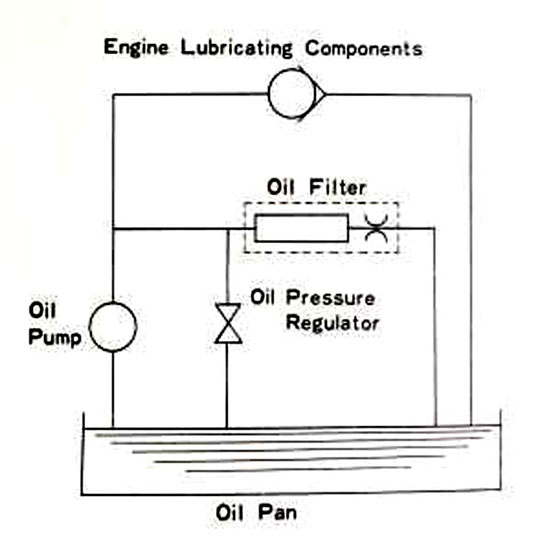 This is how the F manual describes it 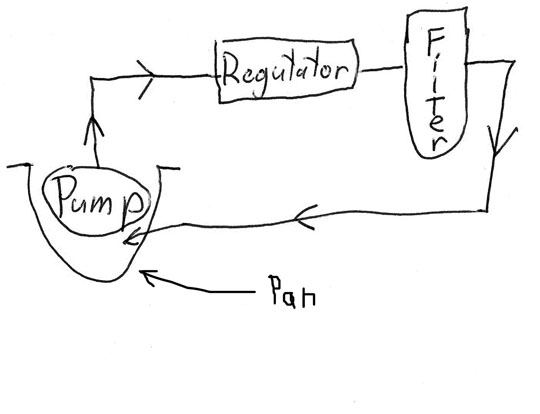 Ok, so which do you believe to be correct?
74 FJ40 confined to the swamp. Homemade body parts replace the originals as they rot away but it's a 40 on the inside.
83 FJ60 destined to face the same fate.

Sorry if I didn't get you the first time Steamer. But as far as pressure is concerned, the F will not allow unregulated (high) pressure to the filter beyond a certain pressure (I colored the filter side a brown oil circuit). The bifurcation divides the oil stream, and its pressure from the oil pump. If the filtering oil circuit, with the pressure regulator, has less backpressure (oil flows freely thru filter element) it should reduce the pressure on the lubrication branch. A cold F needs not to force cold oil thru the screw-on-filter-element (with micron rating) if it flows freely thru much greater sized passages on the lubrication cycle. A 2F has to get oil thru the screw-on-filter assembly. It would be important to know that the pressure regulator has proper function on an F so oil keeps flowing to the bearings. Maybe it gets dirty in the bifurcator/regulator, and the pressure regulator is constantly bleeding off some oil back to the pan because it can't close fully, maybe there is a rusty spring in the regulator somewhere?

Grayscale said:
The Redline diagram makes it look like extra pressure gets dumped in the pan if it can't filter or lube?
Click to expand...

Or, the higher pressure from higher rpm.
74 FJ40 confined to the swamp. Homemade body parts replace the originals as they rot away but it's a 40 on the inside.
83 FJ60 destined to face the same fate.
You must log in or register to reply here.