Does anyone know of a bolt head style drain plug for the FRONT axle of 200?

I was attempting first oil change after new gears, but the mechanic severely over-torqued it!

I pounded in an Allen socket as tightly as I could, then pulling the ratchet as carefully as I could to not twist it out of socket, I still spun the Allen socket in the plug. I am sure it was in excess of 100 ft-lbs as I was having to brace my feet and worried about breaking the 3/8 ratchet.

After Cruise Moab, I am going to make the mechanic replace the plug. Hoping to find a bolt head plug to replace it with.

Also would like to find a sturdier rear axle fill plug, almost twisted that one off too. It goes without saying new plug gaskets are going in next go around.

This is the drain plug you are looking for 90341-24016 . It is a Lexus part that is a 14mm hex head bolt rather than the allen bolt. Hopefully this mitigates the issue going forward, but time will tell. The shop that did mine used a chisel and hammer to remove the stuck plug.

FYI the part above isn't available through toyota... lexus only. Unless things have changed.

Even when torqued correctly, they stick. It's a metallurgy and too-small-of-an-allen-tool issue, not necessarily hamfisted mechanics.
Happens often. See: Can't undo the front diff drain plug..fml.

I think (but haven't yet tried) one way to get it loose is to firmly hammer in a circular pattern around the edge of the stuck plug. I believe this will compress the copper gasket enough to knock it loose. But you'd need a way to get hold of it.. pounding in a big torx bit might work.

or by far the best method.. weld a nut to the face of it. The focused heat will work miracles to get it to move easily.

I tried to loosen mine post gears install last night after break in.I had already put on the Lexus part (had to weld on a nut to get the original out. And the tech had overtorqued it. It started to deform with the breaker bar on it. Easily plus 100 ft lbs when I stopped. I can’t believe a shop that specializes in diff service would do such a brain dead thing. 29 ft lbs is spec.
Pure madness.
Still on there while I consider options.

You can't fix stupid. I wonder how these guys actually keep their jobs.

To be fair usually when you see something with threads that big there is very little risk you’ll damage it from too much torque.

This also brings up something I’ve wondered.. I’m ocd and I *usually* go through the effort of finding torque specs before doing work. How often is this actually done by mechanics? I know there will be a sliding scale. Some never, some people (like the “guru” community in TDIs) basically always.

How often is a “good” shop actually looking this stuff up?

To be honest my original plug was so damn stuck I wasn’t confident the 14mm Lexus part wouldn’t stick too. Might get a new OEM one and have a big ass nut welded to it for my next front diff fluid change.

I bought a six sided impact socket. Leaned into an 18" breaker bar and couldn't get any movement. I think that is around 150lbft conservatively.
I bought an air impact. Put that on the socket. Made sure the socket was correctly seated. The head on the plug rounded before it broke loose. I wouldn't say the impact struggled much, so I'll go with easy to deform material on the plug.
Irregardless I have a bunch of shavings in my diff I need to get out (new gears) so the suck from the drain option won't work.

I think the next step is to weld on a 3/4" nut. Between the heat and the larger diameter I think it will have a chance.

Maybe try the idea I’ve been talking about. Get a good solid punch and try to hammer hard around the edge of the plug, basically attempting to compress the copper gasket a little. I’m not sure if there is room in there to get good swings with the hammer.. and if it deforms the edge of the plug a little it’s not the end of the world.

At this point I’m planning on having a new plug on hand any time I remove the old one.

Have you tried MAP Gas to heat the area around the plug?

For really stubborn items I'll heat the are surrounding the plug or bolt, then turn a compressed air canister (used for cleaning keyboards and such) upside down and use it as a freeze spray on the plug or bolt.

Get the truck up on stands and give yourself more room and leverage if not already done.


Hope you get it sorted..

I tried map gas and a few others have as well with no luck. Haven’t heard of anyone using oxy-acetylene yet tho.

Thanks for the quick responses!

I welded an old lug nut on, using the Allen socket as a pilot. That got the job done.

I am not the most precise welder on my back and had to clean up the flats. 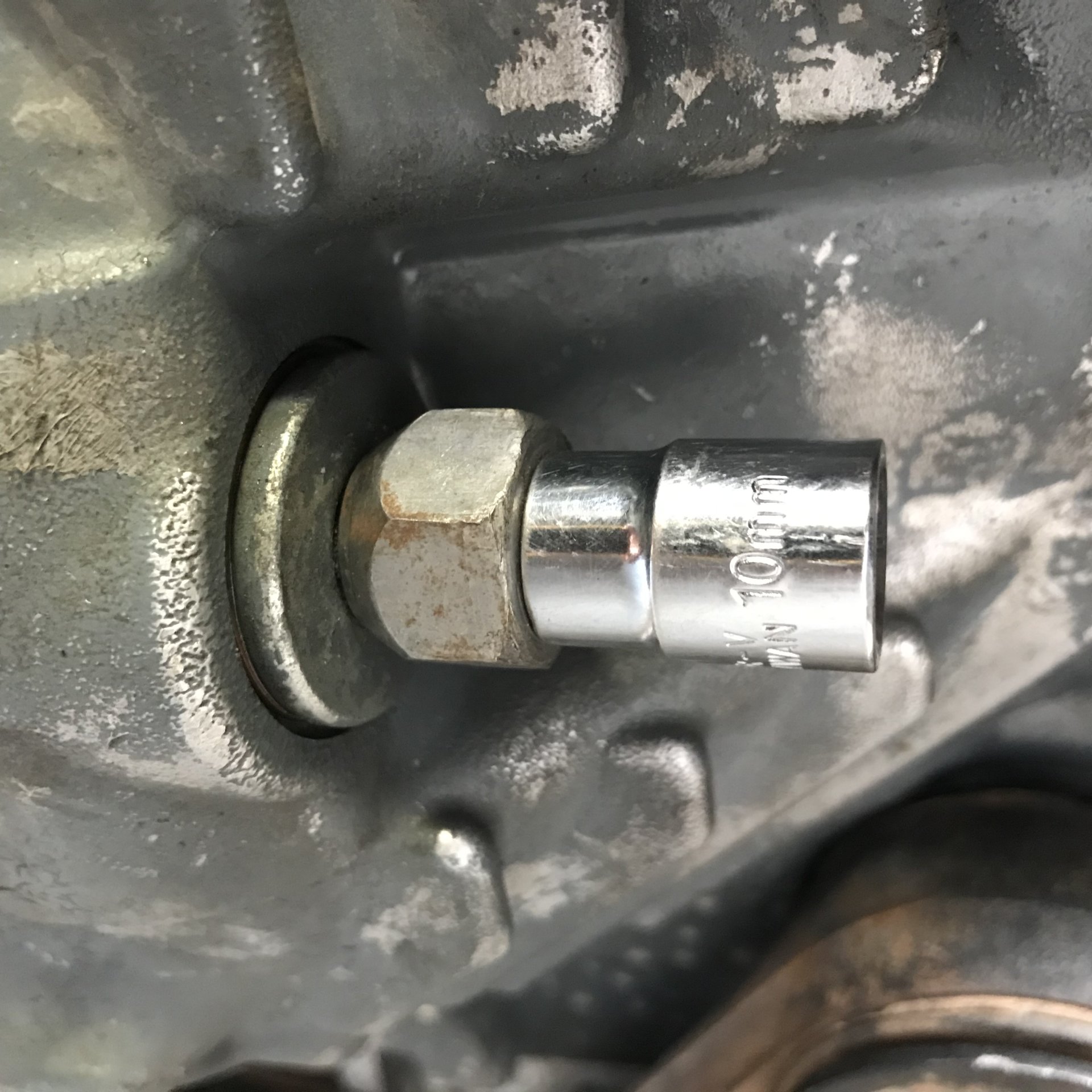 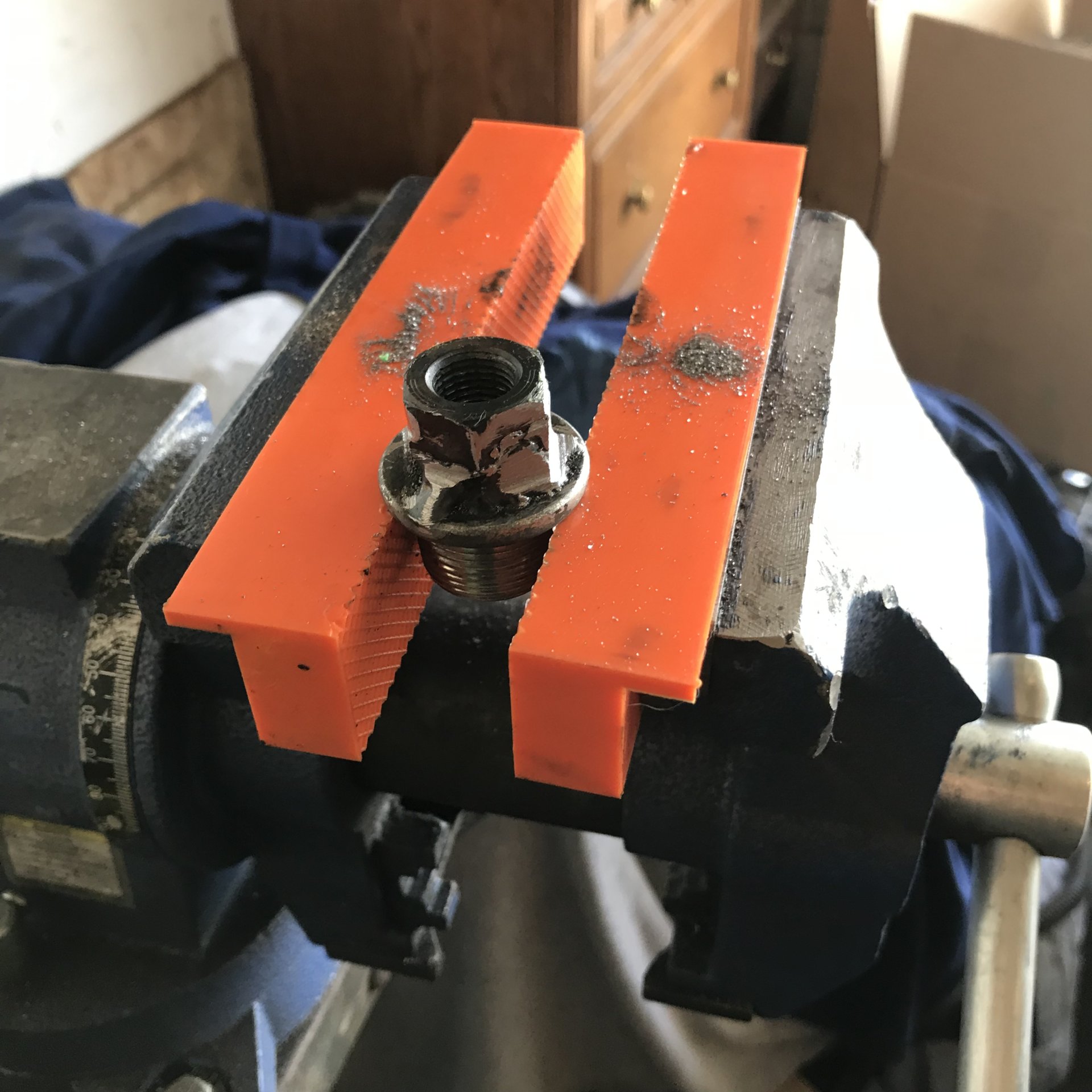 Good idea on the pilot use.

It is a compromised welding position for sure. Can’t believe I have to do it again!
L

I wonder if they are not over torquing it, but other issues are at play here. I say that because I had a piece of stock welded on and then the shop broke it loose with a huge wrench. They left it loose so I could drive home and change it. By the time I got home it was seriously stuck again. Needed a large wrench to get it off again. Maybe something to do with the metals and heat cycle. I put the lexus bolt in and put some anti-seize on it. After that experience I am dreading the next time.

I'm going to put anti-seize on the copper washer (outside face) if/when I get it off.

I do think something else is at play, personally.

Anyone know what antiseize compound would work best between steel and copper, or copper and aluminum? Or, I guess.. steel and aluminum? the issue could be between the plug threads and the case of the diff I suppose.

HDJdreams said:
Thanks for the quick responses!

I welded an old lug nut on, using the Allen socket as a pilot. That got the job done.

I am not the most precise welder on my back and had to clean up the flats.

Mission accomplished so I'd say the welding was successful. Btw where did you score the plastic jaw inserts?

yea i just had this done and replaced it with the Lexus IS part. Not available from Toyota, Lexus only.

Aside from finding the prospect of a "welded nut" product name funny, I really can't believe this doesn't exist from an aftermarket supplier considering every Toyota forum out there is littered with this same issue.

Is 18x1.5mm the thread size for all the drain plugs?
You must log in or register to reply here.

B
Any thoughts on this bit socket for the front diff drain plug?
2

Front differential refill plug changed by Toyota. What about the transfer case?