One very lucky, (or unlucky) dude.

No injuries after Jeep rolls from Black Bear Pass
Road will be closed for washout repairs Wednesday and Thursday
By Collin McRann
Staff reporter
Published: Tuesday, September 2, 2014 6:07 AM CDT
On Saturday afternoon around 1 p.m., a Jeep Rubicon was driving down Black Bear Pass on the Telluride side when something went wrong, and it rolled 50 yards down the mountainside.

No injuries were reported from the driver of the Jeep or its passenger, though the vehicle itself is likely totaled. After the rollover, the driver was able to find their way down to town where they reported the accident. According to San Miguel County Sheriff Bill Masters, while unfortunate, the accident is very unusual because no injuries or worse were reported. The road, known as County Road K69, is steep and treacherous, especially near Ingram Falls. The Jeep rolled off while coming down the road just past the falls on the Telluride side.

“They were very fortunate,” Masters said. “I don’t recall a rollover off of that road that did not end in a fatality. And these people were completely uninjured — it stopped [rolling] before it actually went over the steepest part.”

The names of the Jeep’s driver and passenger had not been released as of Monday afternoon. Black Bear Pass is a popular, albeit notorious, route with four-wheel-drive vehicle owners, who frequently cross it in the summertime. The road crosses Black Bear Pass to Highway 550 between Silverton and Ouray.

As of Monday the Jeep was still in the spot where it rolled to, its windshield and windows shattered. Plans are in place to get it out on Tuesday. Telluride Road Runner plans to use a bulldozer with a winch to pull the vehicle out. There are no plans to close down the pass while this is happening, but all options are being explored.

This week on Wednesday and Thursday, San Miguel County will close Black Bear Pass to do some washout repairs on the road. There will be no access for anyone to Bridal Veil Falls, Ajax Peak, the Via Ferrata or the Wasatch Trail due to the danger of rock falls. The repairs will be made lower down on the road from where the Jeep rolled off.

The U.S. Forest Service describes 12,840-foot Black Bear Pass as a route that offers a very technical trail, and not appropriate for inexperienced drivers or riders. The Forest Service says that while most of the road is moderate in difficulty, a mile-long stretch of steep switchbacks above Bridal Veil Falls is rated as difficult. The pass is one-way from the summit coming into Telluride. A high clearance, short wheel-base, four-wheel-drive vehicle is strongly recommended for that section of the road.

“It’s a narrow road, very treacherous and it’s easy to get messed-up there,” Masters said. “It’s unbelievable that anybody ever goes over it, but a lot of people do everyday.”
T

According to another news report I read out of Denver, the driver didn't stay in the ruts and got to close to a wall trying to stay away from the edge of the trail. The tire sidewall started climbing the wall, and over it went.

the old days Balls of steel 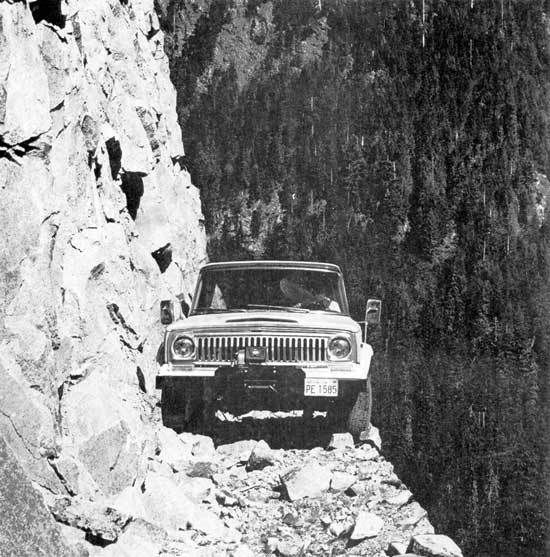 With that said my first trip down BB 20+ years ago I could not get out of my 60 in the same spot safely. I have seen BB changes over the years only to get easier and more roomy as traffic increases. Does not live up to the difficulty rated today as it once had. 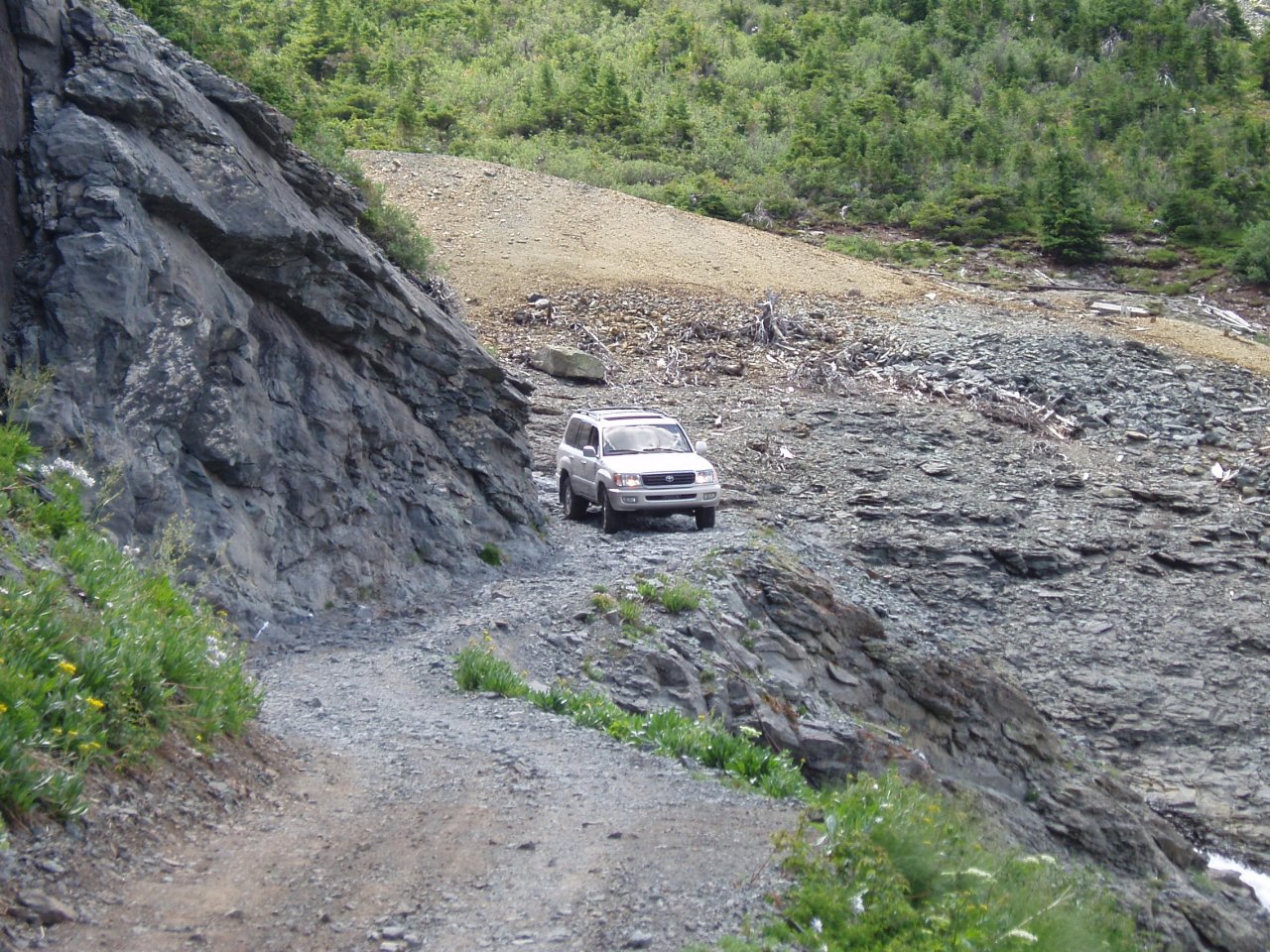 And sh!t for brains.

That's a crazy vid. Thanks for posting. I know we take fun jabs at jeeps but big props to its safety and toughness here.
F

I remember that spot from the run it did there in Aug. When I ran it there was an old guy sitting on the rock that's visible on the left side of the road. I assumed he hiked up to enjoy the show. That part of the trail pushes you towards the right but there is plenty of room.

Also looks like he panicked and hit the gas or froze. In either case he looks like he was going to fast. In a case like that, if you are concerned about your tire placement, just get a spotter.

Appears they tried so hard avoiding getting close to the edge, they went way too high on the left. Azca is right - get a spotter!
T

Better there than a few other places on Black Bear I can think of.

I haven't been there, but it looks like he had 2 feet on the right side. It's crazy that he flipped it in that spot like that.

While we are showing past BB runs, here is one of mine from 2008. The 70 series is a friend and was OK once we righted it. 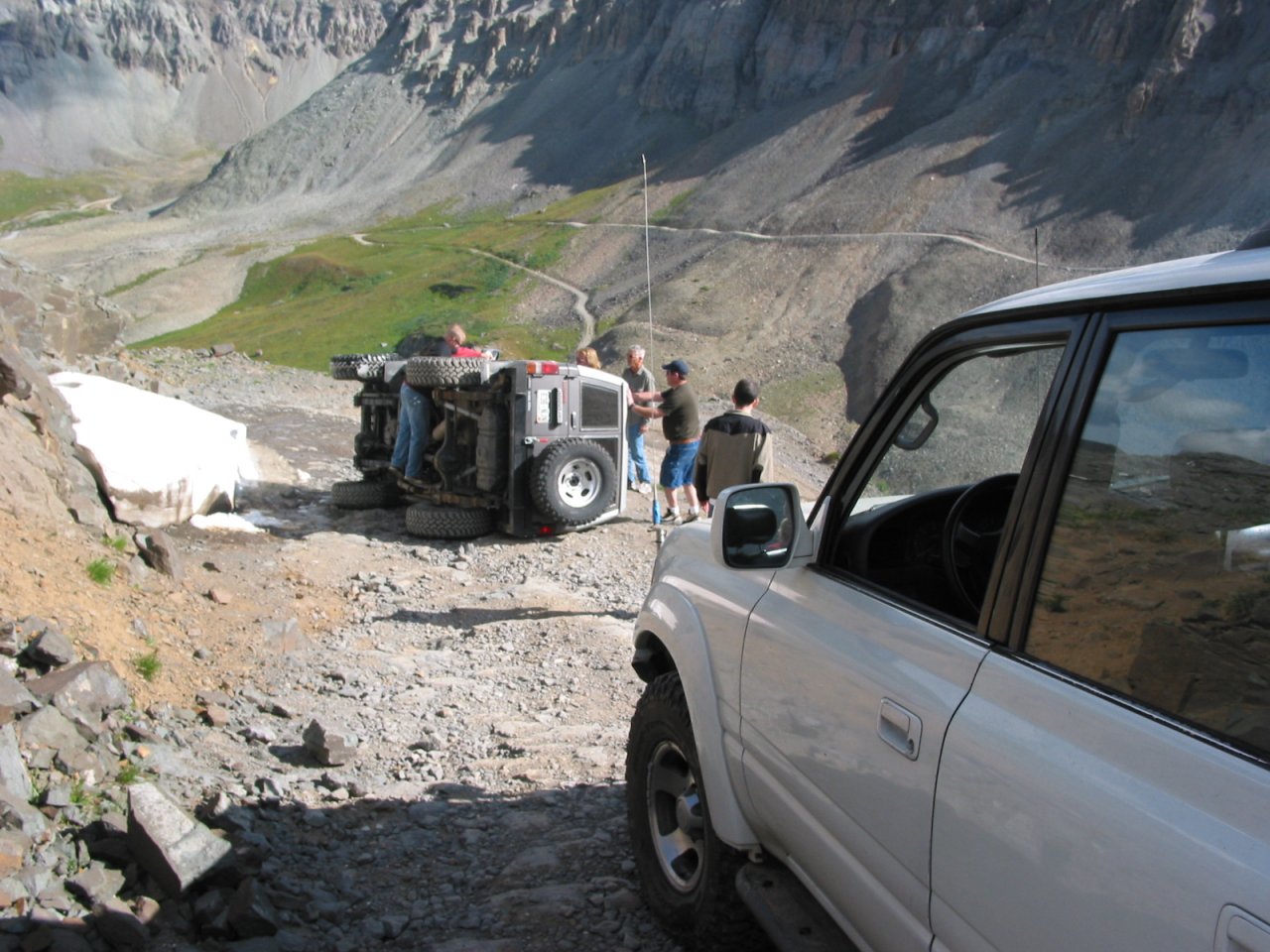 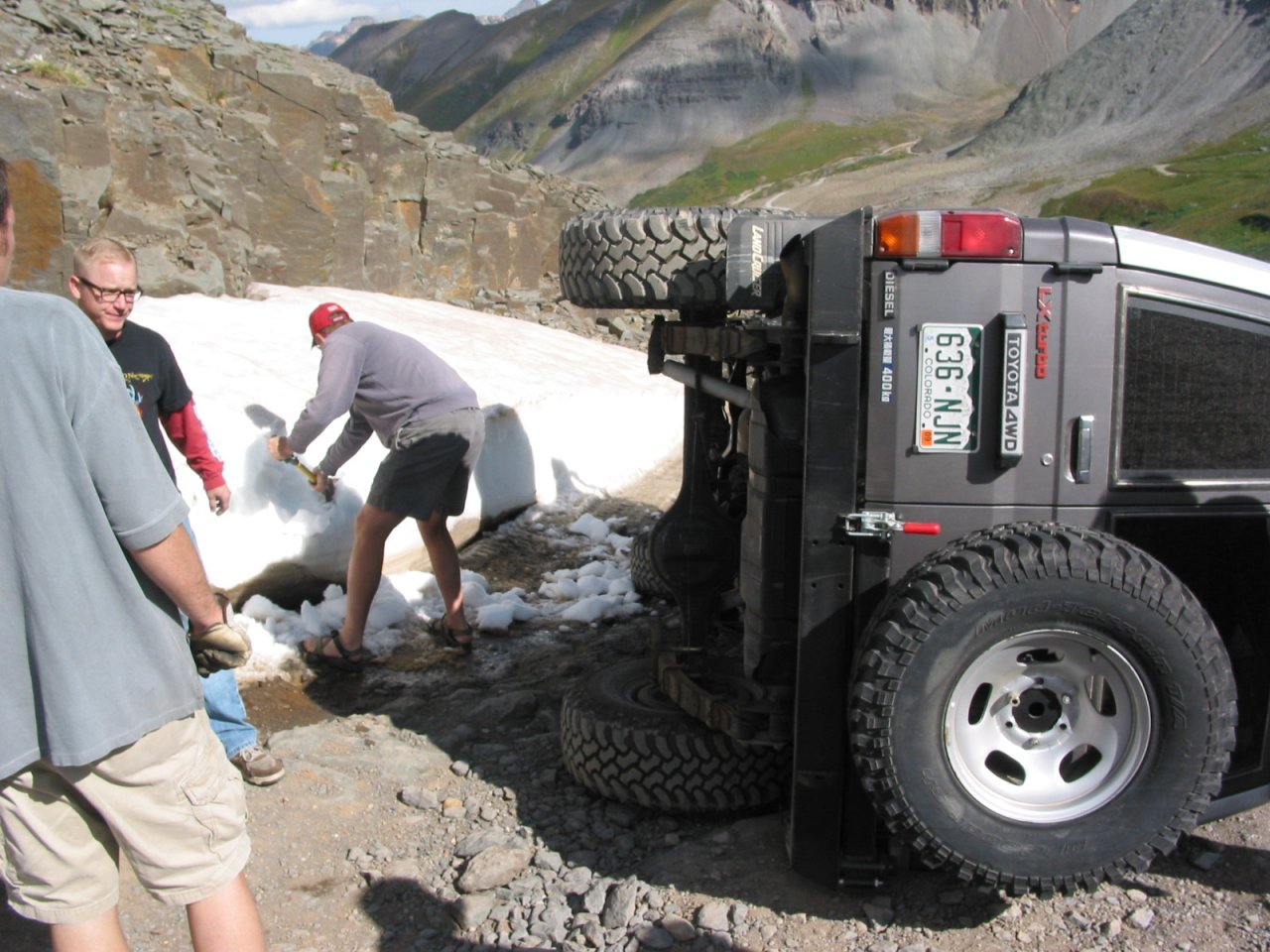 I don't see where, or how, he got into a pad spot there. Did he hit the snow bank? If so he had a ton of room on the right. I know I practice at tire placement, mentally that is, by watching rocks in the trail as I drive and try to either miss, or place the tire on them as I go. It is easier the faster you go go but this just seems a bit much when you have 4 feet or more on the right...

Azca said:
I don't see where, or how, he got into a pad spot there. Did he hit the snow bank? If so he had a ton of room on the right. I know I practice at tire placement, mentally that is, by watching rocks in the trail as I drive and try to either miss, or place the tire on them as I go. It is easier the faster you go go but this just seems a bit much when you have 4 feet or more on the right...
Click to expand...


You are correct! He was "hotdogging" and thought the snow was soft, however it was almost solid ice and when he hit it with some speed, over she went. Very lucky it did not roll more as the dropoff to the right was substantial.
He was VERY embarassed to say the least.

yikes! Glad he was ok - Im sure it was like hitting rock
B

wow, glad everyone was ok on all accounts. The wife hates this run.

Maybe landcruiserphil is right about it getting easier... Subaru anyone?