I just got my fj40 back together today after a new radiator and a alternator, thermostat housing a t-stat, But when truck started fine and ran fine but close to home it started to die out, finally made it home ater having to go really slow, but i get it back and check the battey with the truck runnig, its 12.78, so the alternator isnt working, my question is what in the hell would make it stop working , i took the old one off and out the new one on. I did go from a 1f alternator to a 2f, are the voltage regulators the same? and also is this the voltage regulator in this picture Theres three wires on the box but i only have 2 connecting to my alternator in the plug and the other wire from the battrey , thats what i had on the 1f and the alternator worked. thanks 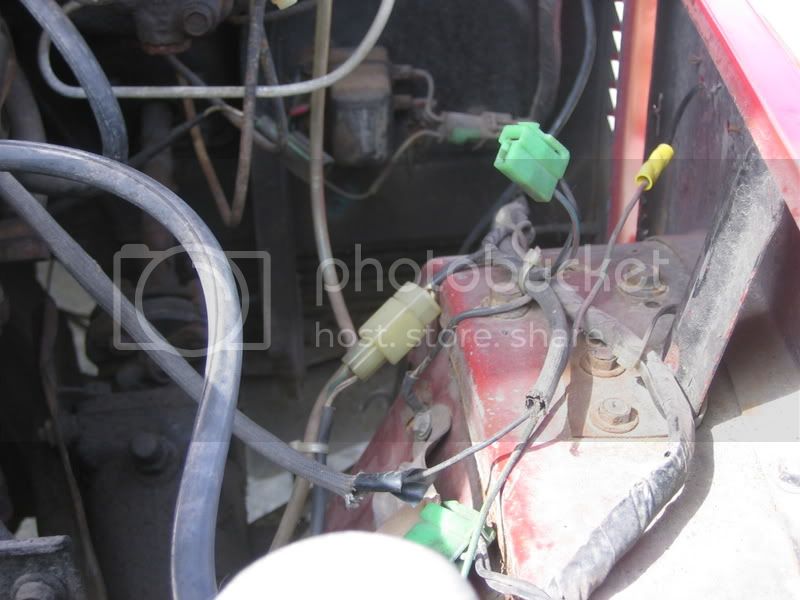 picture no worky, but sound like you're describing the voltage reg. I believe a replaced my 1F alt with a 2f alter since it doesnt fit right (had to rig it), but absolutely no problems whatsoever.
If the volt reg has gone out it wouldn't be charging so Im not sure how you get 12 volt on the battery while running. When my volt reg went out, I would charge the battery and it would last a little while, but eventually go dead since the volt reg was not telling the alt to charge the battery. I'd check the stupid brake light switch, that was one of my gremlins.

12.78? Did you recharge the battery after getting it home? Is your amp meter still working? Try measuring from ground to the B+ stud on the back of the alternator. If it reads higher than 12.78 your alternator is working, but your amp gauge is malfunctioning. If you read nothing there, then make sure the alternator and regulator are grounded, then start checking the regulator. Swap in a known good one. 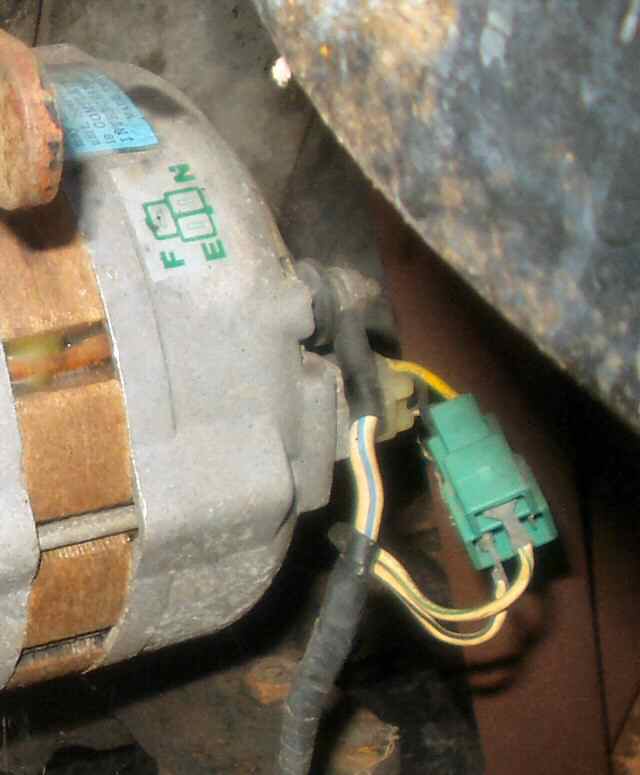 Yea the voltage at the battery is the same with the truck running and not runnigng(12.8), so i know the alt isnt working. neither of my pics are working? I only have 2 wires not including the B terminal on the alternator the top prong and the left one if your looking at the back of the altenator. do there need to be 3 wires? connected not including the B terminal on the alternator, and if my pictures are wokring is that the regulator in the picture 2 wires located on the right side if your looking directly at the firewall and one on the left. the marking are all work off. i did a continuity test but i have a cheap ass little dvom, and cant seem to get a good reading. i lost my fluke. If anybody can chime in here i would great;y apperciate it . ill get some pictures here in a sec just bought a new camera and have to download software

Fj60Ed said:
Yea the voltage at the battery is the same with the truck running and not runnigng(12.8), so i know the alt isnt working. neither of my pics are working? I only have 2 wires not including the B terminal on the alternator the top prong and the left one if your looking at the back of the altenator. do there need to be 3 wires? connected not including the B terminal on the alternator, and if my pictures are wokring is that the regulator in the picture 2 wires located on the right side if your looking directly at the firewall and one on the left. the marking are all work off. i did a continuity test but i have a cheap ass little dvom, and cant seem to get a good reading. i lost my fluke. If anybody can chime in here i would great;y apperciate it . ill get some pictures here in a sec just bought a new camera and have to download software
Click to expand...

As I said before, measure the B+ terminal with the truck running to see if it's higher than the battery. If it is, then your amp meter is defective and you need to bypass it.

i already tried that like i said with the truck runnig the battey is the same as when its not (12.8) so the amp gague is fine I just did notice something though, the battey ground when i put it back on i put it on the alternator through the bottom bolt, this is how it was originally i dont know if this is a problem since i have a steel bolt going throgh alluminun and the alt bracket is pretty rusty. i cleaned it up and am wondering if i should put it back on the alternator or just put it on the bloack and call it a day.

So the amp gauge is reading negative currently when the truck is running? Is that how you know it's good?

The accepted method of grounding is - Battery to block or frame with a large gauge jumper from block to frame. Having yet a third jumper (10 ga) to the case of the alternator never hurts.

1. Check your engine fuse.
2. What is the voltage at the F terminal of the alternator with the wire connected and the key on. Should read battery voltage.
3. With the engine running, run a jumper wire momentarily from the B+ lug of the alternator to the F lug and measure the voltage at the B+ lug. It should jump up to approximately 14 V or more (less if the battery is discharged).

Report back with your results.

Im going to do that in a second, but is the ground on the block fine, you dont need to have it connected to the alternator? also the amp gague reads in the middle of the gague and goes down slightly when i crank, I have a optima yellow top in it so i can run it all the time i need.

Ok i started the truck voltage at the bpos was 12.8, i ran a jumpef into the f terminal and the attempted to touch it to the bpos on the alternator and all it does is spark and arch horrendisly. now what

Well.... if the battery is 12.78 then with a 4.2 ohm field coil resistance (per FSM) the field coil is going to pull about 3 amps. That would be enough to cause some sparks. Try it again. If the wire gets hot and melts , you have a shorted field coil in the alternator OR the F and E wires are backwards...

i know its gonna spark a little but this wasnt a little spark this was somethign being shorted. ill have to do it tomorrow. it raining here now

But electrical wok in the rain is so much fun!!

Id like to see the results as well. I'm going to have to do the same here soon.

What about the engine fuse?
What is the voltage at the F terminal?

You might try disconnecting the F, E plug at the alternator before jumping to the F terminal. Jumping to the E terminal will make a big welding spark.

Ok so i dd somme tests, first off engine fuse is blown so i replaced it with the heater fuse because i removed the heater. lasted for about 1 min and blew again. when i connected it it arched so there is something nice right. so what exactly does the engine fuse handle so i can start somewheree, theres no voltrage at f termnal , this is becuase the fuse. the thing ishe old altnator worked, so if i had the f and thh other terminal switched would this blow a fuse? thanks

The engine fuse runs the alternator, fuel cut off solenoid, smog computer and a few other things depending on the year. If you blow the fuse, it has a short somewhere.

Are you sure it is wired correctly? The white wire with green stripe goes to the F terminal. The white / black goes to the E. N is not used unless you want to run an idiot light. Also check the resistance from the F terminal to ground. Anything less than 4 ohms is a short.

ill do that tomorrow but i belive i have the wires run right. now i guess im looking for a short. Imnot positive but i do belive i was juist dicking around ysterday and measure the continuity between the f terminal and the ballast resistor and got continuity im going to have to check . hopefully thats my problem. thanks

There is supposed to be "continuity" between the F terminal and the ballast resistor because they all get power from the same side of the ignition switch. It doesn't mean anything bad. What you want to find is the short (< than 1 ohm resistance) between anything on the engine fuse circuit and ground. Start by disconnecting the fuel cut off solenoid and anything else that is on this circuit and leaving the alternator hooked up. If it still blows a fuse, then the alternator is shorted.

Ok so i fgured out why the fuse was blowing, i had the 2 wires reversed, so the fuse is fine now, but still not working. i did some tests, key off the wht/blk had .03ohm resistance with gournd, the wht/grn had 56.9ohm wiith key on the wht/blk was 37 ohm wht/grn 88, . another test showed that the w/b wire had continuity to the left side of the voltage regulator, the wht/grn wire had conituity to both wires on the left side, is that correct, they were the same both key on and off. thanks

I hate to sound like a broken record but:

What is the VOLTAGE at the F terminal with the key on, the wires connected and the engine not running?


Measuring resistances in a circuit that is powered up may not be meaningful. Usually you need to "isolate" or disconnect something to determine the resistance or you will get fooled.
White wires with black stripe are ground wires. They should always have continuity to ground.

If the alternator isn't putting out more than battery voltage: With the engine running, disconnect the F terminal wire and jump momentarily between the B+ lug and the F lug of the alternator and measure the VOLTAGE at the B+ lug. It should rise when you energize the F lug. If not, the brushes are probably worn out inside the alternator. Measure the RESISTANCE from the F lug to ground with the wire disconnected and the engine shut off. The resistance should be 4 ohms. If it is more, the brushes or the field coil is bad.
You must log in or register to reply here.