I've had plans for about a year to swap my A440 with an H42 ('86) from GLTHFJ60. He gave me the tranny last summer, followed by a group of all the parts I needed for the swap (except for driveshafts) from Tonyota. Haven't pulled the trigger on rebuilding the tranny or getting really serious about the swap as I didn't have all the parts, it's my DD for work, and no space to do the swap (except the landlord's driveway!).

Last week, after years of prodding, my buddy decided it was time to buy his own Toyota (originally he wanted a 4runner for a SAS build). He went nuts sending me craigslist postings...10 a day for a week . Sent me a post for a 60 nearby for parts; we talked about splitting it for parts for my trans swap and axles for his SAS.

Turns out, despite the fact it had been sitting for quite a while the old 2F started up quickly and idled happily for 20 minutes until I shut it down! We bought it, and the whole way home my mind was thinking about all the nice things I could do with parts from my new little baby. I had planned to keep my 3FE until I could do a diesel swap a few years down the road. But then I remembered something about putting a 2F and 3FE together for a 2FE. Looked it up at home and turns out it doesn't sound like a bad swap, and would give me the torque I was looking for in a diesel (or at least more than the 3FE).

So here's the questions:
1) How does this change the parts I've already accumulated? Will my 3F bellhousing happily mate to the 7/85 2F block? How about the '86 H42? And I've wanted to remove the vac-shift function on the transfer case and use the 60s manual mechanisms. Use my t-case with the 60 shifters or just rebuild and use the 60 t-case? ...AND another friend called me this week asking to buy two firearms from my (small) collection- which would cover the cost of a used H55. If I go whole-hog and buy an H55, what parts will change for that? Or none?

2) What pre-pull tests or checks should I do on the 60? I plan on doing a mild rebuild on the 2F, but want to make sure there aren't major problems I don't know about. I was going to do a compression test. Anything else I can look for (outside measurements on the short block) that I shoulld check before pulling the drivetrain?

Any other pre-2FE tips? Or must-have parts I should claim as we split up the 60? Thanks for any help! 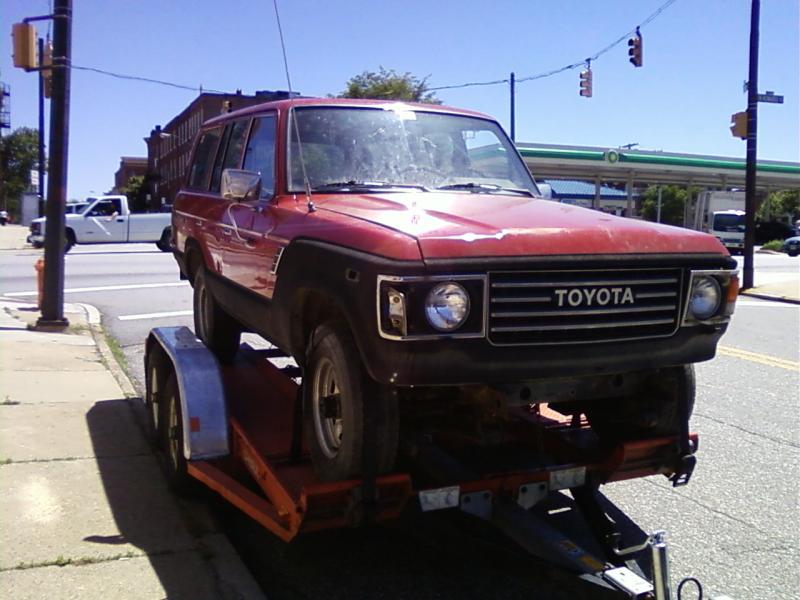 I am in the process of doing the same thing, 89 62, 2fe, h55. You have everything you need except maybe the later manual tranny mount and drive shafts. I'm not exactly sure when the change was, but you want the mount from a truck that has the spacer between the tranny and xfer. the 3f bh shifts the tranny something like 7 degrees to help with drive line angles, so the early tranny mounts won't mate up. Also the later drive shafts will be the correct lenght for the h55. Other than that it sounds like you have everything. I started a thread last fall when i got started, i would link to it but i'm not that smart, you could search my user name, I think it is fj62 + 2f + h55. I'm getting started on it again, just sent my cam to delta, i have all the parts to rebuild my 2f, so i'll start posting again soon. I'm in VA so if your ever heading down 81 give me a shout and stop by and check it out if you want.

Thanks Brett! I had searched plenty of times, and your thread never came up. I do travel down your way occasionally, so I may take you up on the offer . Here's the link:
https://forum.ih8mud.com/60-series-wagons/307324-fj62-2f-h55.html

It's got some good pics that I didn't see in any of the other 2FE/manual swap threads.

Forgot to mention, but I do have a later-60 transmission crossmember. And my tranny does have the spacer.

What about the transfer case?? Is there any advantage to using one or the other? I have to rebuild either one. And I could rebuild the 60 case before the swap. Is one better than the other?
1989, 1990 FJ62; 03 Tundra SR5
"I'm not a hillbilly, I'm an Appalachian-American"

At some point the transfer cases got larger idler shafts i'm thinking it was 87, also i'm not sure about ratio's. I think i read somwhere that someone thought the ratio was different behind the auto. I would think if there was a dif the ratio would be lower to help the auto but i don't know. I have an 84, 86, 87 and the 89, I think i'm going to use the 87. Get rid of the vacuum crap for sure. From what i can tell, the wiring for the manual tranny and transfer will hook to the 62 harness. The 62 harness just has more connections. Now i'm contemplating pulling my frame so i can sandblast and paint it...I may never get done
86, 84 Fj 60
76, 75, 74, 71 Fj 40
98 Tacoma
97 80 Series (hers)
85 Xtra Cab crawler, duals, elocker front, etc.

True, a 2FE isn't for eveyone, they are just for anyone that needs to rebuild their 3FE

The following MUD regulars have done this, either in a FJ40, ir FJ60/62. Tonkota wrote up his story in Toyota Trails and has a copy posted online. I'm sure if you search on 2FE focused on just the FJ60/62 section you will find even more.

New member introduction and some questions